The week beginning the 7th of September 2013.
Saturday the 7th

Another nice fine day and more copper injections, for the main mob of cows and two of the bulls.  Demelza and 87 had not yet had their 7in1 vaccine, so I gave them that and they'll get their copper in a day or two.

Dealing with the bulls is always an exciting process: they move fast and they're unpredictable, so I'm always very careful.  I prefer to work them with Stephan there too, in case something goes awry.  I find I'm a little more comfortably assertive with the bulls when not alone, although that may simply be the effect of the bulls responding well to two people moving them and their options for misbehaviour being reduced by our dual presence.

After I'd coppered the cows, I drafted five out of the primary mob for preferential feeding.  Imagen still looks thin each year coming up to calving and even though I usually end up being wrong in my prediction of twins in my cows, Imagen is getting on a bit and she was a fraternal twin, which increases the possibility that she'll twin at some stage herself.  The other four are due to calve first.  I left fat Curly with the main mob, even though she's an early-calving cow, because I won't have enough feed for any more on the flats and she doesn't need extra. 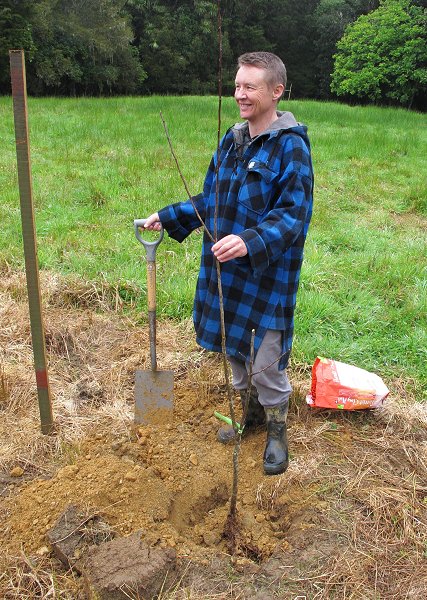 Elizabeth and William bought me a Ballarat apple tree for my birthday!  We all went up the road so I could plant it.

Every year when I was a child, my father bought several large sacks of Ballarat apples from an orchard in Kerikeri and spent days bottling them.  When cooked, they form a smooth pulp.  We always had apple crumble through the winters, apple pies, apple with cream or ice-cream for our desserts.

There is already one Ballarat in the orchard, but I particularly asked for an extra one.

If you're not familiar with such a garment, the blue-and-black checked wool Swanndri is a traditional New Zealand farming garment.  I bought mine right at the beginning of my time here and in this climate, even though it's relatively warm, it's great.  The various types of wet weather gear I've tried over the years were never as good as throwing the Swanndri over my head and then drying it out again on my return.  It's not a fashion item by any stretch, but when the wind is cold, I throw it on over whatever else I'm wearing and I'm good to go! 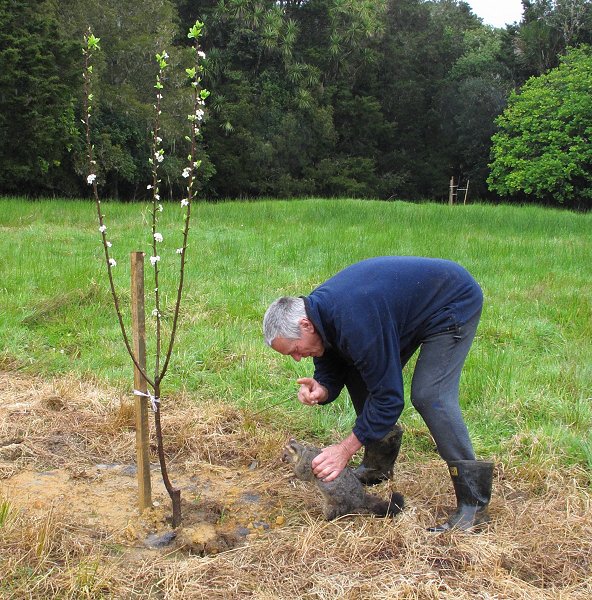 There was a dead possum in the trap Stephan set under a Totara tree by the stream, so on the way to being buried at the bottom of my new tree's hole, it received a sound telling-off about going anywhere near our trees - as a representative of its species, perhaps?  Even though it's dead? 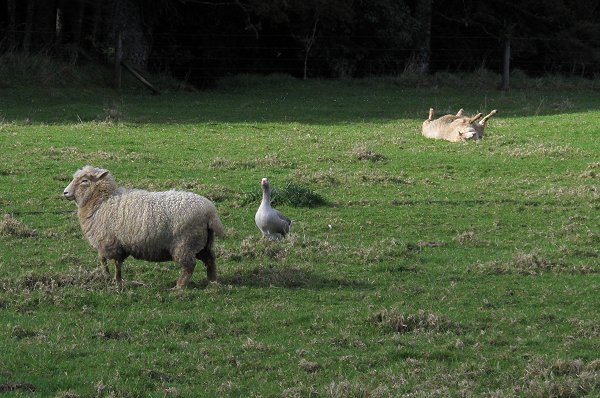 Oh look, an upside-down sheep; what a surprise.

We spend all day looking out the window and counting to ten - or making sure we can at some point, so we know that ewe is upright.  This morning we only ever got to nine, since she was on the other side of the little hillock in the House Paddock. 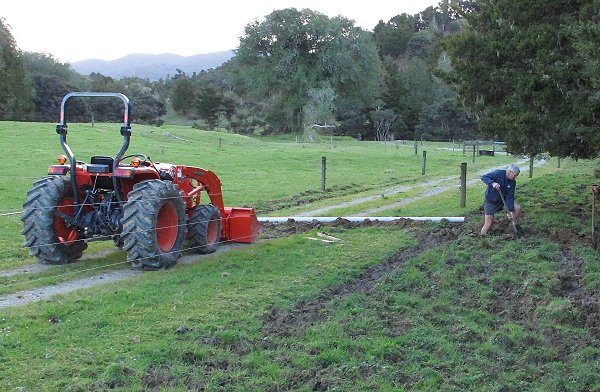 The soil is too wet to do much tractor work at present, so Stephan took the shovel to do what was necessary along the Mushroom flats to install a culvert pipe under the track.  Water pools on the left in the paddock and over the track and needs to be drained away to the stream in the Small Hill paddock on the right. 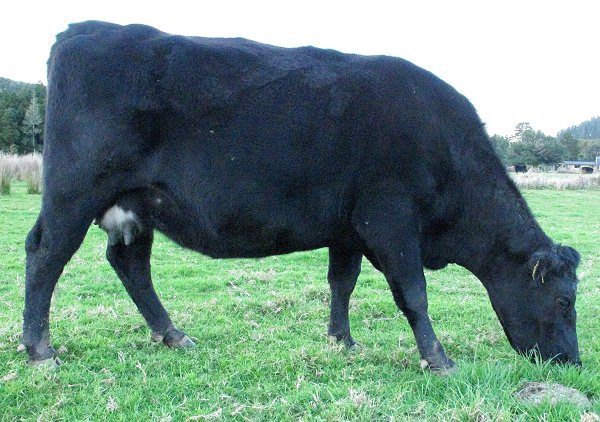 I've been wondering whether or not 568 is carrying twins again (she twinned at her first calving three years ago.)  Her udder has developed faster and earlier than I would expect for her 30 September expected calving date.  She's also quite thin and while she usually is lighter than the others, I'd have expected a better response to this winter's reduced feed pressure than I've seen in her. 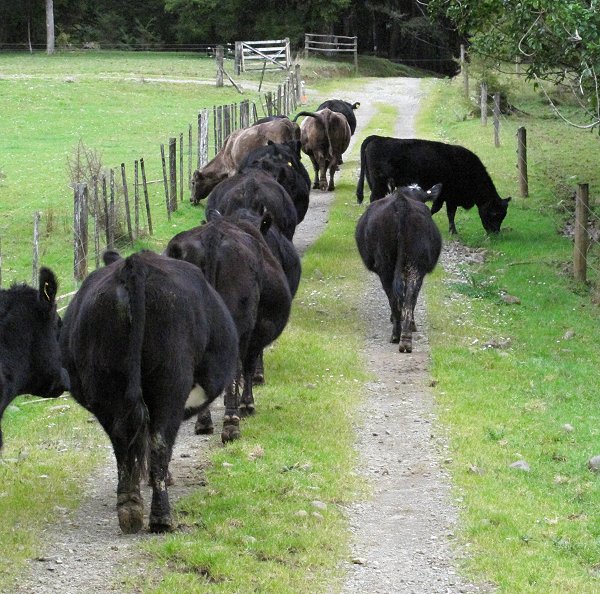 Here are the rest of those roundly pregnant cows.  It's only in the context of their own families/herd that one can really tell anything from the outside of a cow in regard to the state of any calf she might be carrying, but at this stage in their late pregnancies, I can certainly see bulges where there wouldn't otherwise be such fullness.  The little animal on the right with the white just showing on her head is 660 and she is not in calf.  She's still round in the belly from the feed she eats, but it's a lesser roundness compared with all the others. 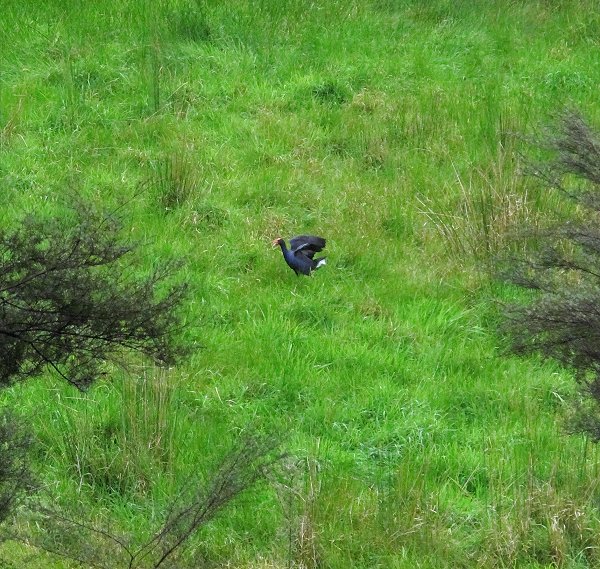 A Pukeko, alarmed by my appearance in the Big Back Paddock this afternoon as I checked on the cows.  To sound the alarm to the other members of its family group, this one had flown or run away from its closer proximity to the nest and repeatedly flapped its wings with loud squawking.  The sitting bird probably remained on the nest, somewhere in the swamp in a clump of rushes.

It's my birthday, so I sang happy birthday songs to myself as I went out for a long walk this afternoon.  Stephan's been plying me with delicious treats this week, starting with a banana cake, then a chocolate cake, then another banana cake for today.  I decided it would be a good idea to leave the bike at home and walk briskly around the farm to do the things I needed to this week, or I'll have to buy bigger trousers.

Gaye and Brian came for dinner - and brought me a banana birthday cake. 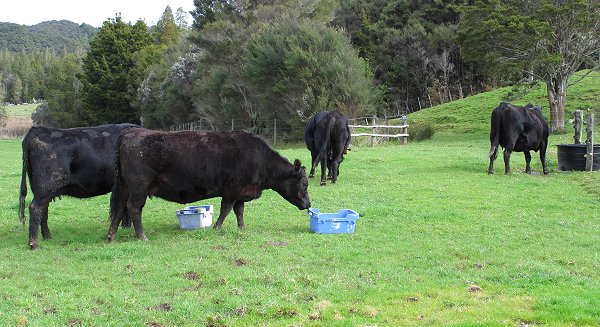 Before sending the R2 heifers out around the back of the farm again, I wanted to draft off 701, who's due to calve about ten days before the rest.  That meant reorganising some of the others so 701 wouldn't be alone.  Because Athena behaves problematically when someone else calves in her paddock, I've left her with Imagen, who's due a bit later.  Into this paddock with 701 I put 568 (my suspect twins cow), Damara 74 (first on the calving date list) and Dinky 94.

Before opening the gate, I dished out some Molasses and Magnesium, their first dose for the season, hoping they'd be distracted by it and therefore less likely to pick on young 701.  It seemed to work, except the others pushed her away from her bin of Molasses. 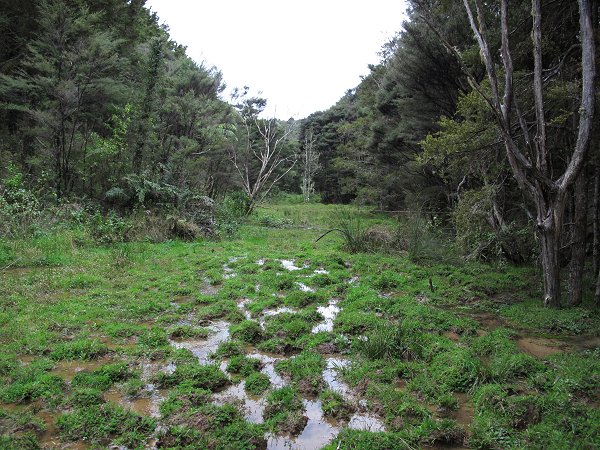 This is the wet area I photographed earlier this year, here looking downstream, to the left in the earlier photo.

A huge amount of water flows down here at this time of year.  With lots of cover on each side, it will recover well once it's fenced to exclude the cattle. 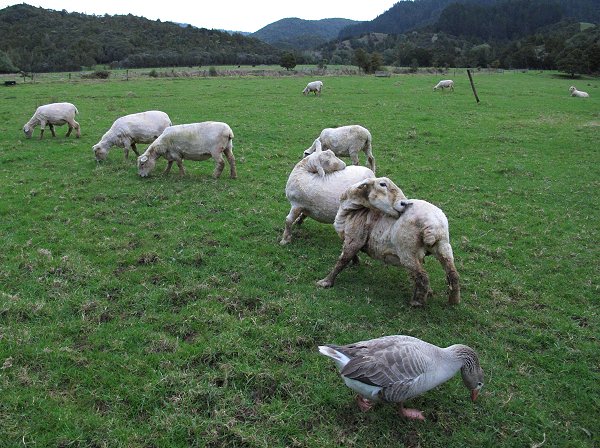 I arrived home just as Stephan was putting the newly-shorn sheep back into the House Paddock.  We'd talked of him doing them as soon as they were dry, but I hadn't realised he'd get around to it today.  Yvette didn't go with them, so still has wool.  Every day I look at her and wonder whether she's still alright (she's the one sitting at the far right).

It must feel marvellous to be able to itch properly!

Have you entered the first Calving Date Competition?