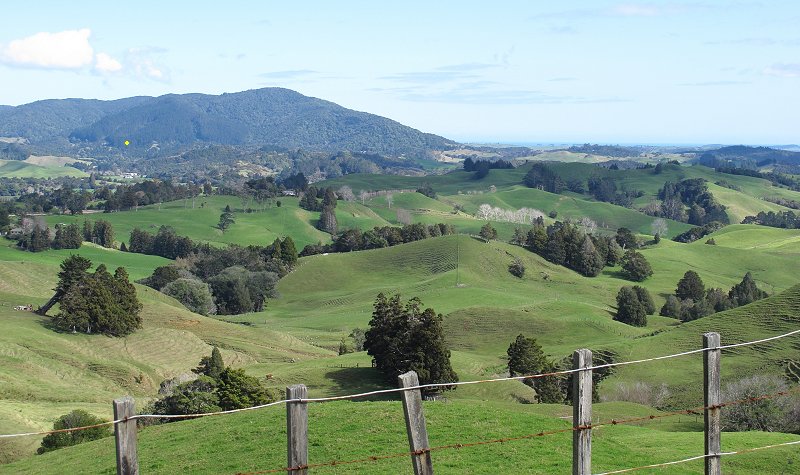 A few months before he died, Uncle Hack said he'd give me one of his pineapple plants.  Today we went to collect it from his daughter, who lives over the other side of the big hill we see when we look east from our place.  This is the view looking back our way, with a yellow dot in the middle of our Pine trees (which blend in with the big Pine plantation behind our place).  The blue to the right of the big hill is the sea out at Te Oneroa a Tohe - Ninety Mile Beach. 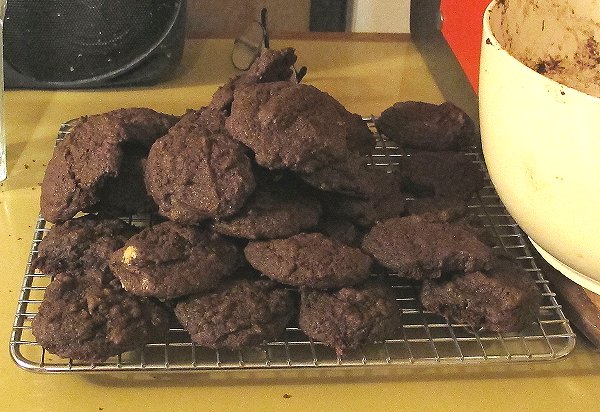 On the first day of my birthday, my partner made for me ... a batch of chocolate cookies.  They were very nice! 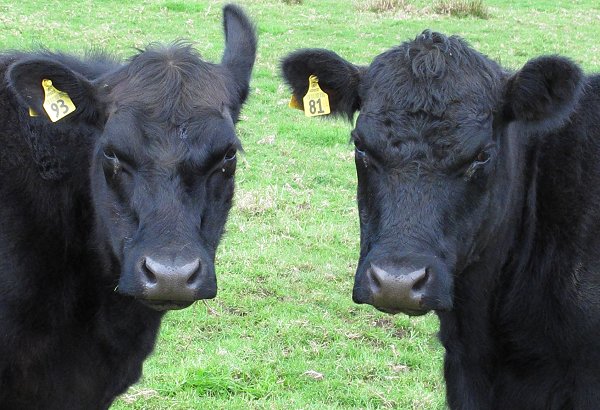 Sisters Emma and Eva.  They look so very different from each other - same mother (Demelza) different dads. 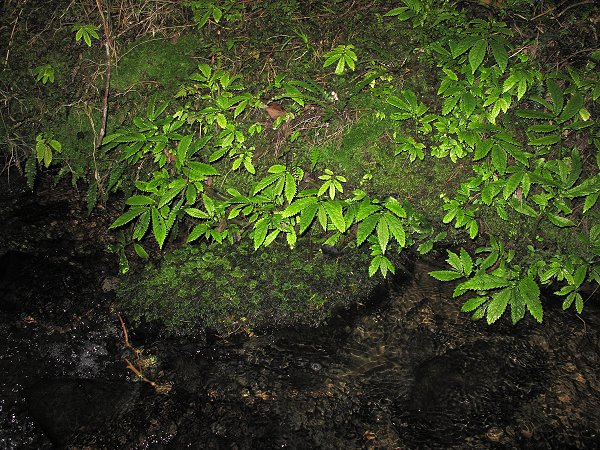 Parataniwha plants on the bank along the stream.  The mosses and succulent leaves looked lovely together, but small photos never do these things justice.  You'll have to come and have a look for yourselves, one day.

I was on my way to visit the cows in the Middle Back and called them down the hill to the gate to the Back Barn, where they all stood panting, many of them with obvious movements along their right sides, as their calves moved around after being shaken on the downhill run.  568 felt like there was a fight going on inside her and it carried on for ages. 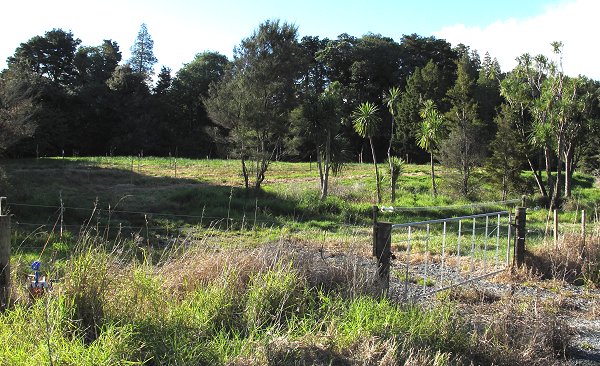 The orchard still just looks like a lot of sticks from a distance, but there are buds and a bit of green leaf on some of the trees already.

I moved the R2 heifers this evening and noticed a big string of mucous at the rear of 710.  It was a little worrying, but when I finally got close enough to her to look at it, I snuck up and pulled it free (and nearly collected a very sound kick backwards) and confirmed it was thick mucous, not any sort of membrane.  She has been producing a lot of mucous for the last couple of weeks.  There's nothing smelly, just lots of it, so I shall presume everything is well, unless there's some indication to the contrary. 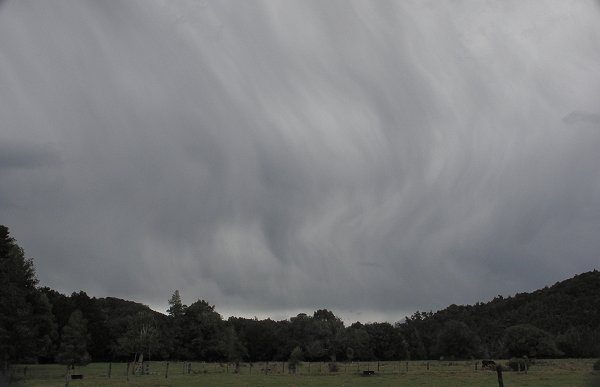 The clouds were extraordinary this afternoon. 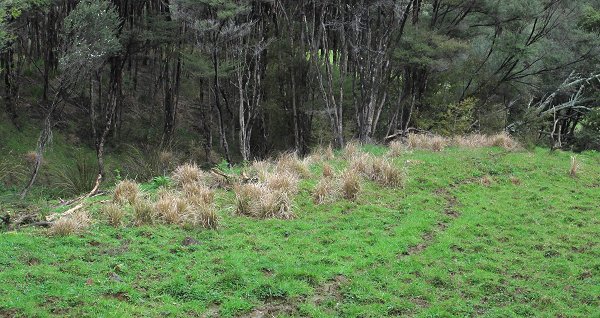 Finally, the sedge I wiped a month ago is dying. 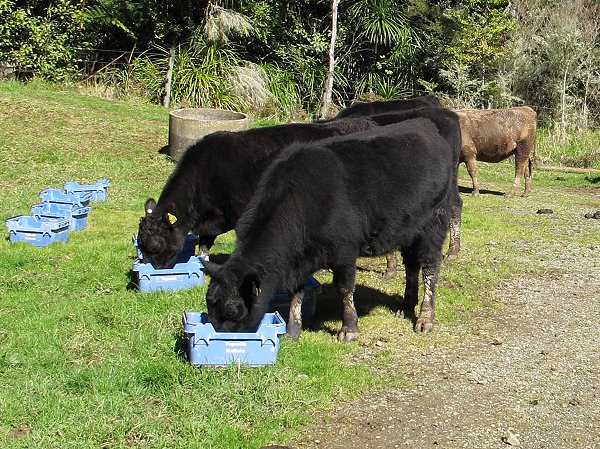 It being a nice fine day, I brought animals to and from the yards all day, to give them a shot of copper.

When it was the turn of the ten pregnant heifers, I prepared ten Topmilk bins for them with a bit of Molasses in each one, to begin training them in preparation for receiving Magnesium Oxide with Molasses before they calve.  Some of them are already well aware of what a blue bin means around here, but some of the others need a few more opportunities to learn that pleasant lesson. 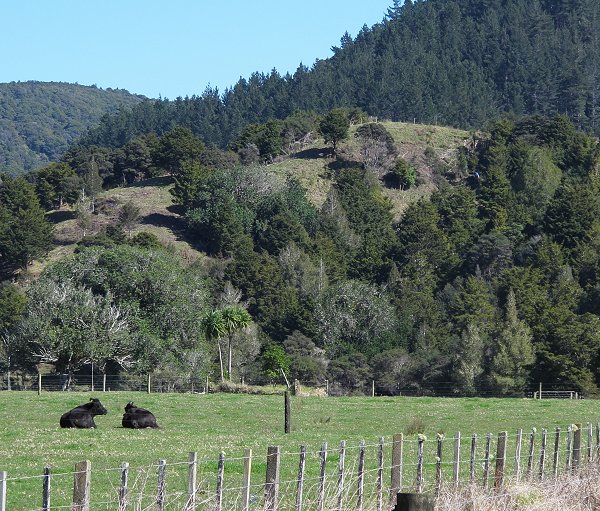 Stephan has spent several days clearing the Small Hill Paddock hillside.  He was prompted by a photo I found of the hill a few years ago when you could see grass, not just all the regenerating scrub.

Those two slouching cows are Dexie and Zella in 5d. 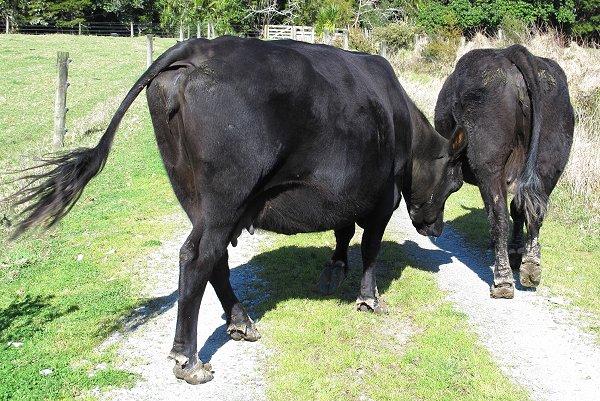 475 and 602 on their way in to the yards.  Both cows have picked up condition considerably, evidenced by the filling in (or out) of the area from vulva to udder, where they get really hollow if in very light condition.  If they gain more, there'll be fat around the area at the base of the tail. 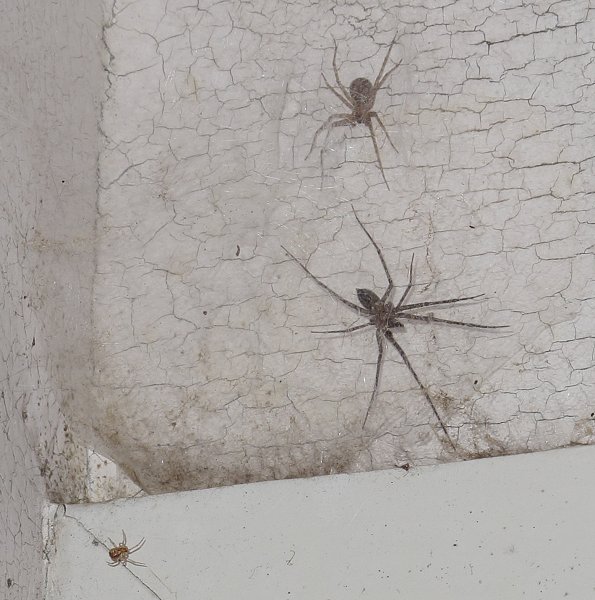 There is a pair of sheet-web spiders above our toilet again.  I wonder what it is they like about this particular spot?  I suspect that little spider thing at bottom left is a moulted skin from an earlier stage.

The top one is female and the other, male.  (He left a few days later.)

The web so far is a small flap across the corner.  If the spider stays and catches sufficient food, she'll extend to span the whole space from wall to wall, as her predecessor did in 2011.

This year there are to be two competitions, because there's a special pair of animals I'm watching with great interest: twins Gem and Meg.  (Eva's Annual Calving Date Competition page will appear shortly.)

There haven't been very many entries yet, so do please join in.  If you entered but haven't received an acknowledgement, please try again - someone sent an anonymous entry, and I have no way of telling where it may have come from.