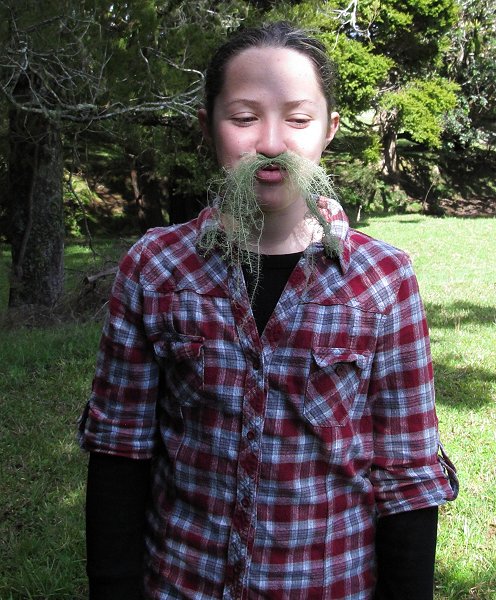 Nina, ten-year-old daughter of a friend of ours, rang a couple of days ago and asked if she could come and stay for the weekend.  We met her for the first time last summer, when she came to swim in the pond and immediately afterwards she rang to ask if she could come and stay with us.  I was taken aback only because I couldn't imagine being so self-possessed as a youngster, but we were entertained by her enthusiasm.  Things were a bit busy when she first asked, but this weekend was relatively free, so she arrived on Friday evening and moved into "her room", which she'd inspected on her first visit and decided she'd like very much!

We walked out to check and move cattle and talked about all sorts of things.  Lichen always provides opportunities for imaginative use - being dry and clean, it's the best natural thing for a fake moustache! 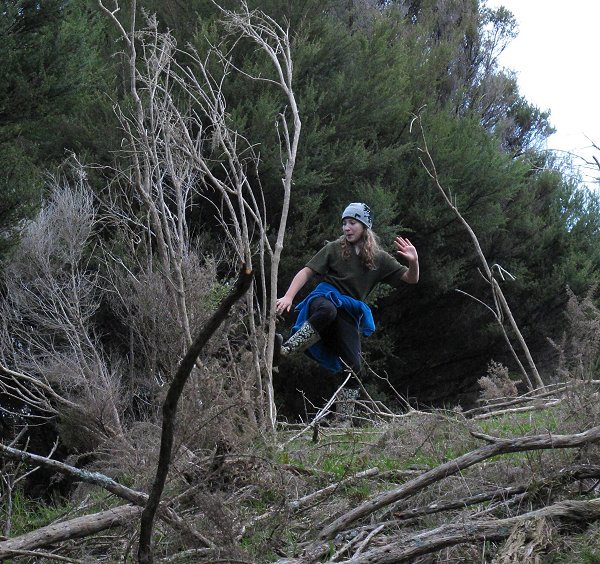 Clearing scrub ... all the previously sprayed gorse in the Big Back paddock has dried and rotted sufficiently that it doesn't take much effort to knock it down and still appear to be super-human in strength! 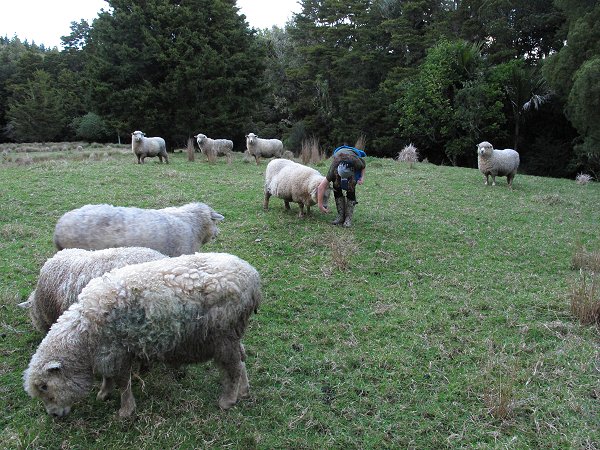 Rain, is all my notebook says today.  I did some writing and Stephan and Nina played board games until her mother came to collect her during the afternoon. 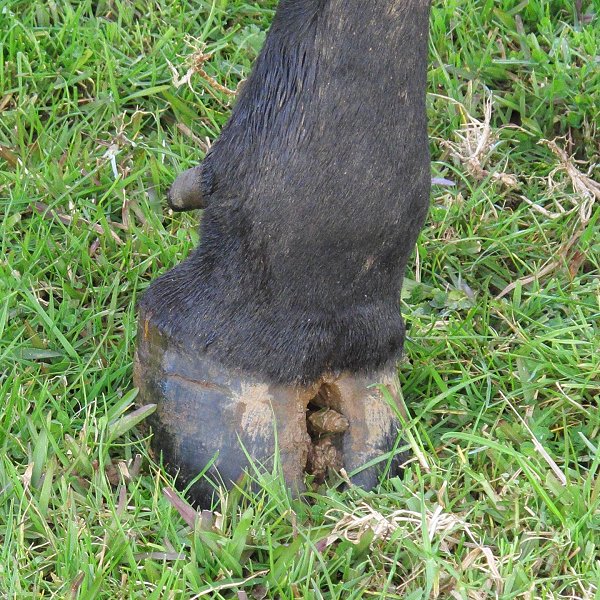 I have to fly to Wellington tomorrow, so spent most of the day doing preparatory reading.

In the late afternoon I checked on all the cattle and found 602 holding her weight off her right front foot and limping a little.  Between her toes was a small stick, probably a Puriri twig.  If she put her foot flat on the ground, her toes might splay enough that it would drop out, if everything weren't so soft and muddy.  602 became very keen on being brushed all over last year, so I made several attempts to get near her foot to flick the stick out, but she's less comfortable with my proximity now than she was when we were regularly close.  While her foot was obviously uncomfortable, it was too late to take her in to the yards - and the head-bail isn't working anyway - so I squirted a bit of iodine at it and left her, hoping she'd dislodge it somehow and if not, I'll deal with it when I come home.

The Vet Council has an annual training meeting for the members of its Complaints Assessment Committees and those of us on the Preliminary Assessment Committee were included, partly so we could actually get together for a face-to-face meeting, the first time I would meet one of the others.  I flew out of Kaitaia at nine, then from Auckland a bit after ten and arrived in Wellington in time to join the others for lunch, before some afternoon meetings.

I had not been terribly comfortable about the trip to Wellington, particularly with regard to the recent earthquakes, the last being only eleven days ago.  To assuage my anxiety I took a slightly different mix of clothing and luggage from my usual "city wear": comfortable long-distance walking shoes, and a small back-pack with spare batteries, radio, torch, water, and a few other things I'd have been glad to have access to if anything disastrous happened.  Fortunately nothing did, although a few of us thought there had been a minor tremor at some time during the afternoon.  We were on the eleventh floor of a Willis Street building and were regularly reminded of the emergency response should an earthquake occur. 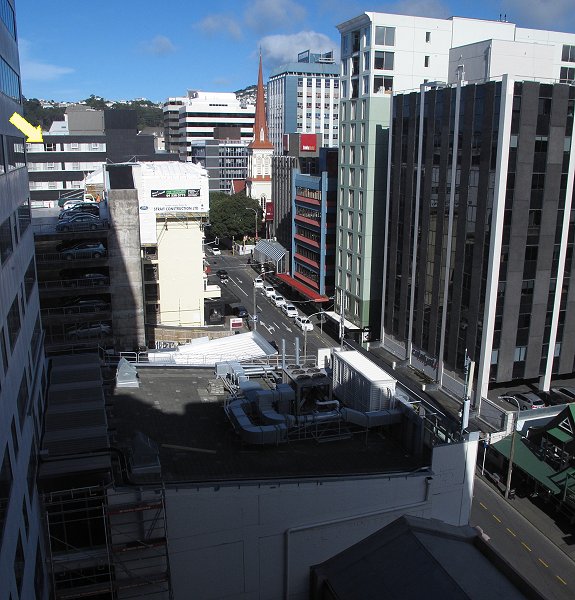 Wellington from the Vet Council's offices on the eleventh floor of Kordia House in Willis Street.  The arrow points to the window of the room in which I spent the night.  It was comfortable and quiet enough and didn't wobble, so I was happy. 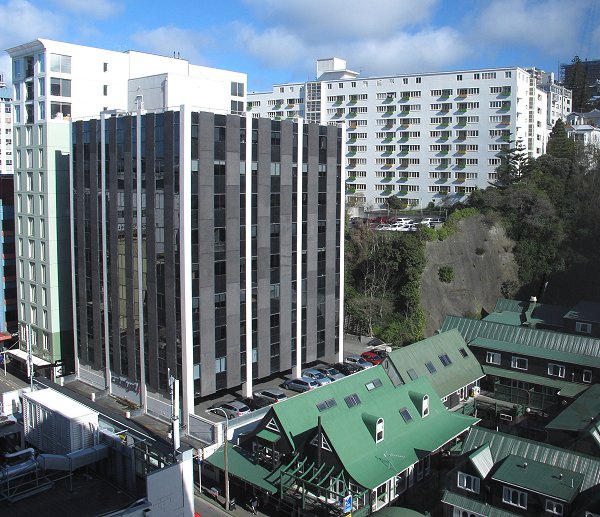 I watched someone taking in and hanging out more washing on top of that building in the background, during our lunch break.  From all the stories of Wellington wind, I don't imagine it would be a good idea to hang washing up there without regard to the weather forecast or one's knickers might end up lost on some far-off city street!

The green-roofed complex in the bottom corner looks very familiar - I think there may have been a night-club somewhere in there about twenty years ago when I used to visit Wellington regularly.

After lunch three of us headed out to the airport for flights home and having often heard those announcements "this is the last call for passenger Joe Bloggs; please proceed to gate 12 immediately to board your aircraft" and wondered in what circumstances anyone would be so inconveniently late in boarding their plane, I found out!  We'd been sitting having coffee in an area where the announcements were not broadcast (that seems a little silly, in an airport) and had lost track of the time.  We boarded two minutes before the plane was scheduled to take off.  The plane smoothly left the ground and we breathed a sigh of relief that we'd made it out of Wellington safely and without ground-shaking events!

I'm glad I went, despite my high level of anxiety about the location.  I realised how anxious I'd been once I arrived home and relaxed!

I slowly walked 602 and 475 to the yards; 602 is no more uncomfortable than the other day, so it's only the pressure of the stick between her toes which will be annoying her, not any puncture of the skin.  While I was away Stephan finished putting the renovated head-bail together - although it proved to be too narrow when closed, so will need further adjustment for my muscly-necked cows.

While I held the head-bail closed at the right width, Stephan grabbed 602's foot and flicked the little stick (about three inches or 8cm long) out from between her toes and she was soon standing comfortably again.

These are the first four "thin cows" I separated from the main cow mob: 571 at the back, and Emma 93, Eva 81 and 657.  I brushed them in the warm afternoon sunshine.  There must be something not right inside 571, because she remains wirily thin.  She's been drenched and had copper and more feed than her contemporaries.  Last year for her.

This year there will be two competitions and the first, for twins Gem and Meg is open.

(Eva's Annual Calving Date Competition page will appear in the next couple of weeks.)