The week beginning the 8th of February 2014.
Saturday the 8th 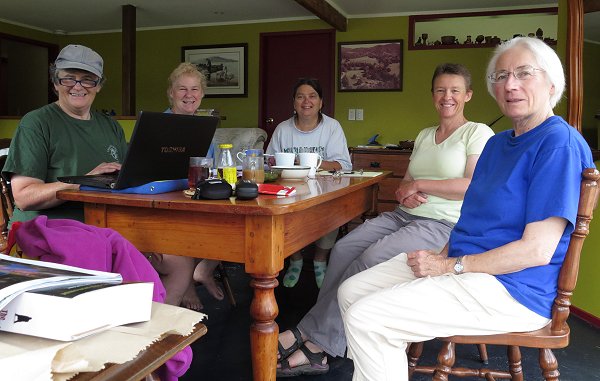 We spent the morning talking through ideas for the revamped website, having a lovely time together.  I very much miss this sort of interaction with other women.  I'm only sorry that during this splendid opportunity I was so distracted by the absence of and threat to Stephan.  The plan had been that he'd cater for us all and in between times be off out of the way doing something useful, like fencing! 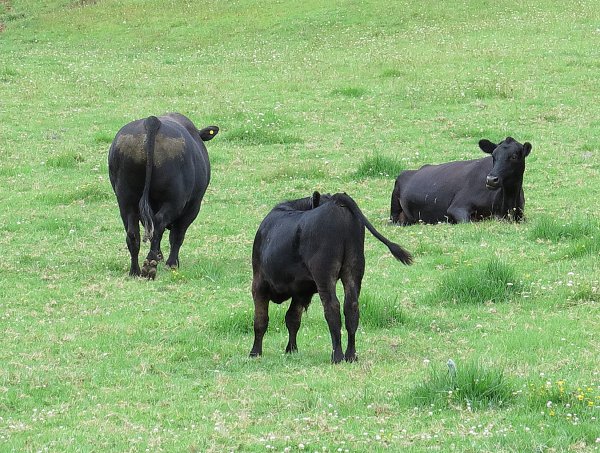 Zella behaved oddly during milking this morning, first defecating and urinating everywhere before I started and then, when I was only about half-way through milking, suddenly launching herself backward and deciding she'd had enough!  She rarely behaves like that but because it's the day I expect her to be on heat again, I suspect the hormones suddenly flicked a switch in her brain and off she went.

I watched carefully during the rest of the morning for signs that she'd entered the period of standing heat which would indicate when I should inseminate her, but saw nothing useful.  When my guests had gone, I went out for a general cattle check and, finding the bull sitting quietly under the Totara near the gate in the Camp Paddock, called him over and let him into the House Paddock.  He growled and paced his way down to Zella, who got up and tried to mount him.  Within the hour she'd allowed him to mate her and four hours later, when they were quietly grazing again, I sent him back to his usual companions.  Job done.

I had worried that Stephan might be discharged directly from Whangarei Hospital and that I (or some kind friend or family member) would have had to go down and collect him.  Fortunately there was an opportunity to send him home in an Ambulance this evening (he was told he was about to leave at 10am and spent the day waiting, hoping that it would still happen) and he was admitted to Kaitaia Hospital for another night on IV antibiotics.  They started him on antibiotics as soon as we got him to the hospital on Thursday and he's been receiving them ever since.  With an open fracture, there's apparently a high risk of infection and prevention is a lot easier than cure.

I went in to see him when I knew he was due to arrive.  I ignored all signs about visiting hours and Stephan had already spoken to the staff to say I was coming in.  I figure the health system had separated us for four days, so it could jolly well bend its rules to allow visiting now it was possible.  It was good to see him, but later I realised he was still not quite in his right mind, with all the drugs he was on and withdrawing from.  Morphine does funny things to him. 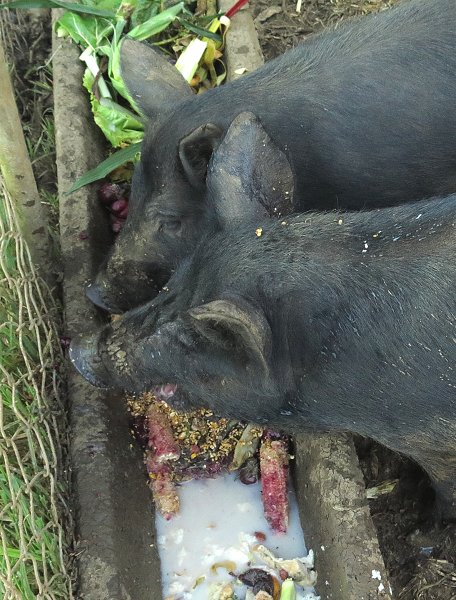 I didn't expect to enjoy my interactions with the pigs quite as much as I have: they're always so appreciative, getting stuck in to whatever I bring them.  I think they may have been doing better in the last few days than they normally do, with contributions from Elizabeth and William and regular bits and pieces from Jane's kitchen and garden.

Late last Thursday night the phone rang.  I answered presuming it could only be Stephan from Whangarei, but it was my friend Jorja who asked if, after a family wedding during the weekend, she could bring some friends and family up for a night on their way around the usual tourist visiting spots?  I figured my world had gone mad and what difference would it make and said yes, to five people.

By Sunday five had become seven, but because there were three couples amongst them and they said they'd bring a tent for two and that they'd cook, I thought we could fit them all in easily enough.

This evening I had company while bringing Zella and Imagen in. 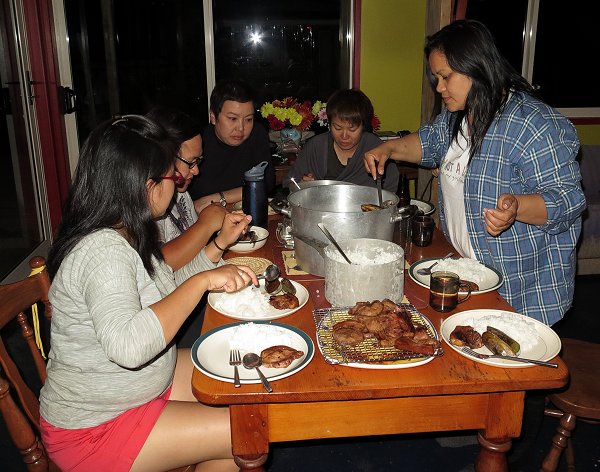 They'd all been up to the Cape for the day, so didn't arrive until seven and by then I'd needed to eat.  Their dinner looked and smelt delicious, but by the time it was ready I was beyond tired and didn't join in. 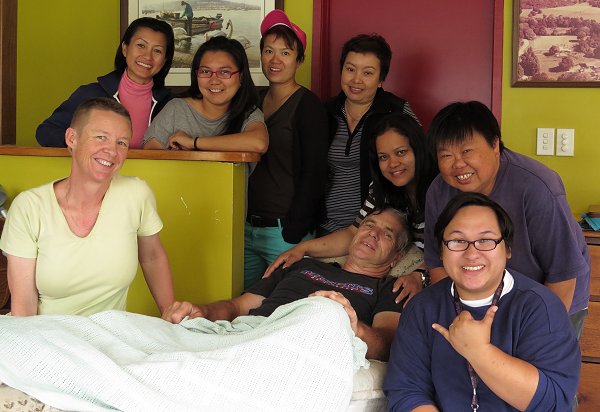 Everyone looked after Stephan very well and kept him entertained, so he was happy and I had a break from full-time nursing.

I did a mini-demonstration of butter-making this morning, with the tiny bit of cream I'd managed to get from Zella's milk, producing only about a table-spoon of butter.  But it was the freshest and best butter my guests had ever had the opportunity to try, so was worth the effort, despite the paltry amount produced.

They were fantastic visitors and I always love seeing Jorja (far right, standing).

In the evening Stephan's cousin Christina brought dinner, including an Apple Cake, something Muriel used to make regularly and which I haven't had for years.  That was a real treat.

My right hand went numb this morning during milking.  I've been doing quite well up until now, gradually getting a bit more milk each day, although it takes me nearly half an hour to milk Zella.  Stephan usually nearly fills the ten litre bucket; I'm getting about half that amount at the moment. 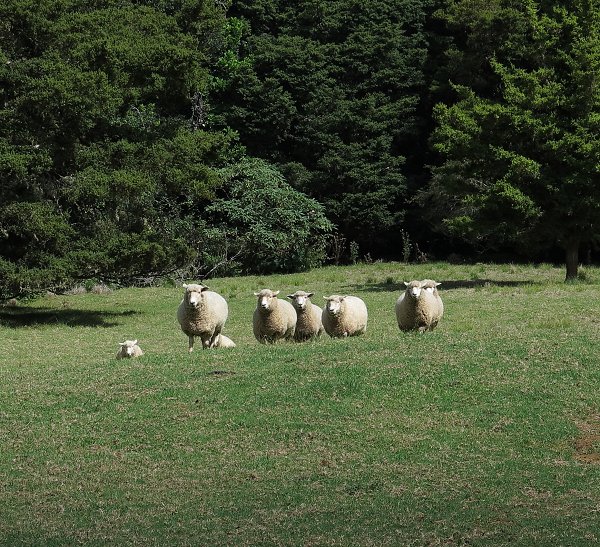 Nine sheep eat an awful lot!  I'm always surprised by how quickly they eat the grass right down in their usual paddock.  I called them up to the gate and took them around to the House Paddock, since the cows have had a good go in there. 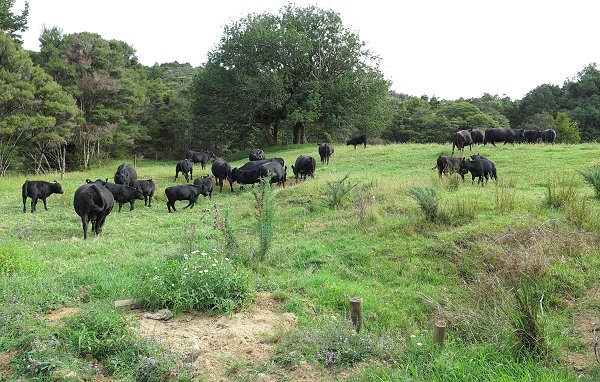 The weather has been dry for a long time and the grass is slowing down.  Lots of the cows are pregnant - I'd like to write definitely, but I'm not quite that sure - so today I drafted those pairs about which I'm fairly confident out of the two bull mobs and combined them in the Bush Flat paddock.

Old friend Jim was due to visit and asked if he should shorten his stay because of our current situation?  I replied that if he were prepared to do all the cooking, he'd actually be very helpful to us.  Today he and 11-year-old daughter Thea arrived for a week with us. 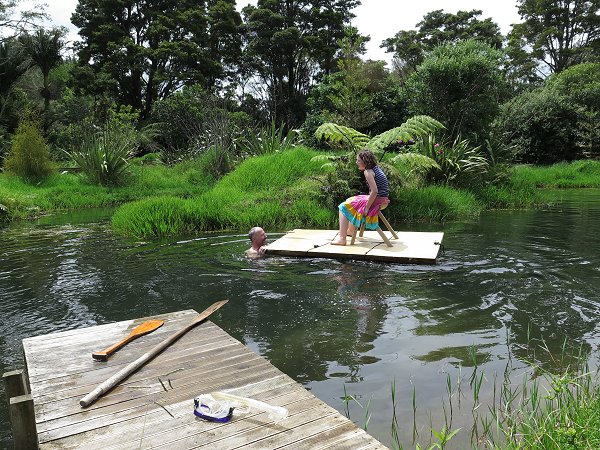 Thea, like all our other young visitors, spent as much time in and on the pond as she could. 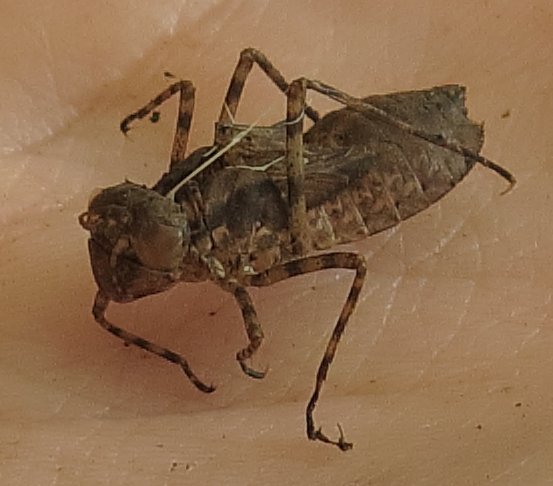 Thea found this dried, empty skin on the edge of the pond, presumably from a dragon-fly nymph.

Stephan just lies around, doing nothing.