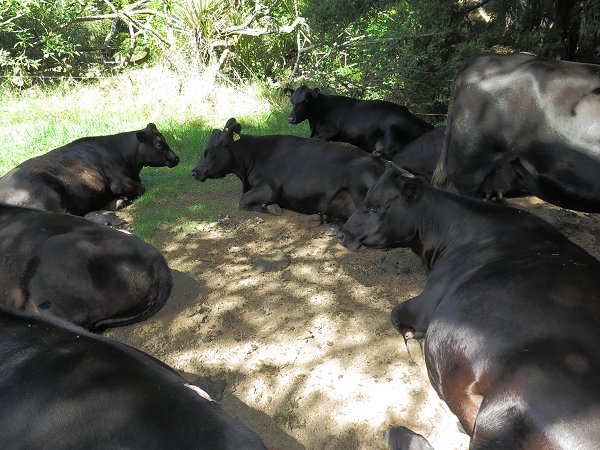 I still get a kick (not literally, that's the point) out of being able to walk around amongst all of these animals without any of them getting up.  In my opinion a cow's rest is as important as anything else, so habituating them to my close presence enables me to do what I need to do while they carry on doing their own thing without disturbance.

These are the insemination mob (in the Pig Paddock) where I came to check under their tails for signs of fertile mucous to indicate their oestrus status.  Most of them are pregnant, so there was nothing to see. 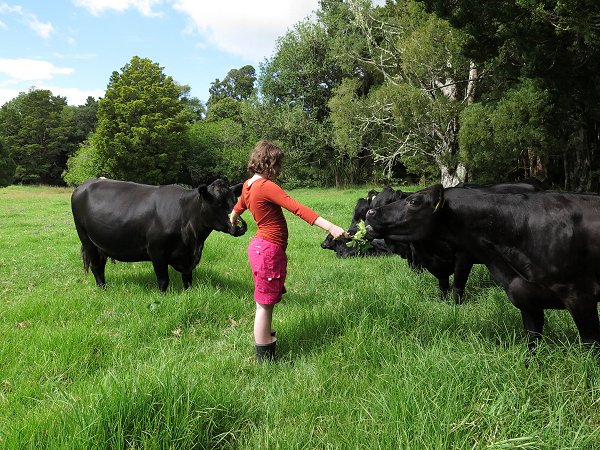 Thea, having learned that cows really like Puriri leaves, collected them whenever we or she was out in the paddocks and fed them to them.  She called them Perdity leaves.  I spelt Puriri for her and explained the "tongue tap" nature of the production of r in te reo Māori (much shorter than a rolled r), but she stuck with her own version. 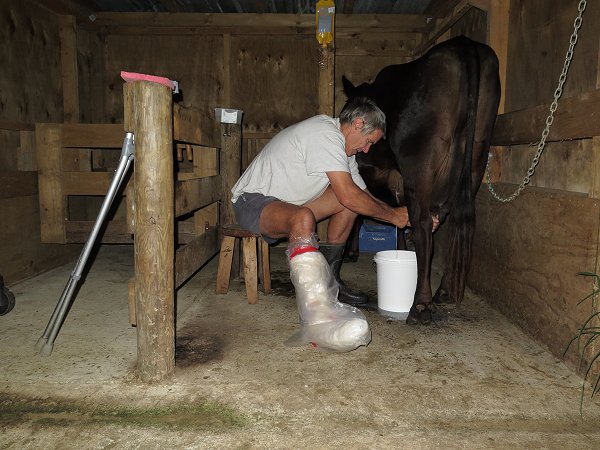 Several times in the last couple of nights I've been woken by pain and numbness in my arms.  I'm not sure whether my arm pain indicates the onset of an overuse condition, or is simply a normal symptom of my body's response to unusual activity.  In either case, it's making it difficult to do other things and I'm now not sleeping well.  This morning Stephan announced that he would do the actual milking, being one job he could conceivably do to take some of the pressure off me and so we planned how we'd manage it safely.

He made his way very carefully down to the shed (it's about as far as going to the bathroom and back from where he lies on the fold-out couch in the living room) and waited safely penned in the calf pen while I brought Zella in and washed her teats.  Stephan then hopped around to sit on his stool and begin.  If Zella weren't such a quiet-natured cow, this would not be an option; but she hardly flicked an ear as Stephan moved in this odd manner toward her.  She never kicks and when she does move her feet a little for comfort, she feels the bucket and never knocks it over.  I stood at Zella's rear, with my hand on her the whole time, so I could anticipate any movement backward.  We tried putting the chain around her, but it makes it really uncomfortable for the milker.

Very conscious of the pins sticking out the end of Stephan's toe, we both moved very carefully and deliberately at all times.  When he was finished, Stephan stood and made his way out of the shed before I allowed Zella to move.  It all went very smoothly.

This does not count as "light duties", this is "mental health maintenance" because watching me wear myself out is making Stephan very unhappy and this is something he can quickly do which saves me quite a lot of energy without him being up for very long. 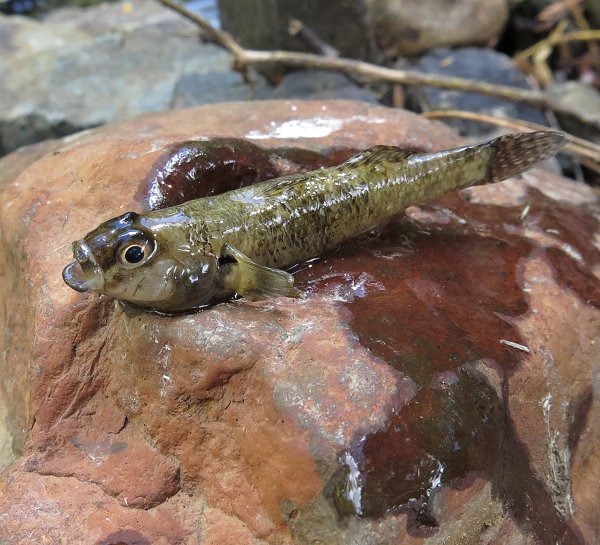 I spotted this dead fish in the stream where I crossed to check on the cows in the Back Barn this afternoon and put it out on a rock to take its picture.  I think it's a Common Bully. 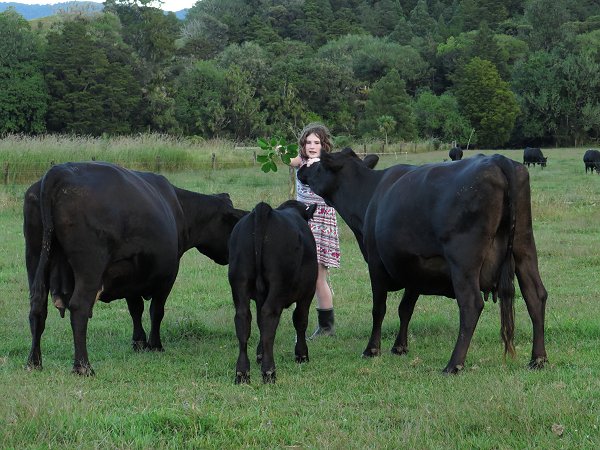 Thea again, this time with Zella and Imagen and the calves.  Thea has her hand on Zella's nose, trying to fend her off in an attempt to offer the leaves to one of the calves, but as they haven't yet developed a taste for Puriri, she eventually failed in her favouritism. 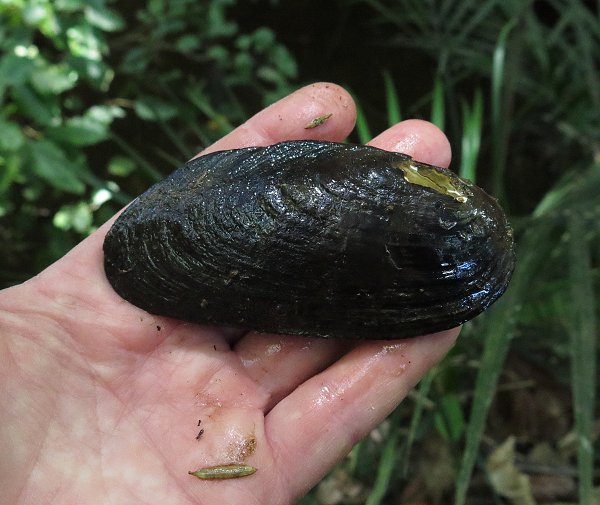 This is a rather large live mussel from the stream which runs down Diggers Valley.  I don't recall seeing one of this size before, nor any empty shells brought out into the paddocks by the Pukeko. 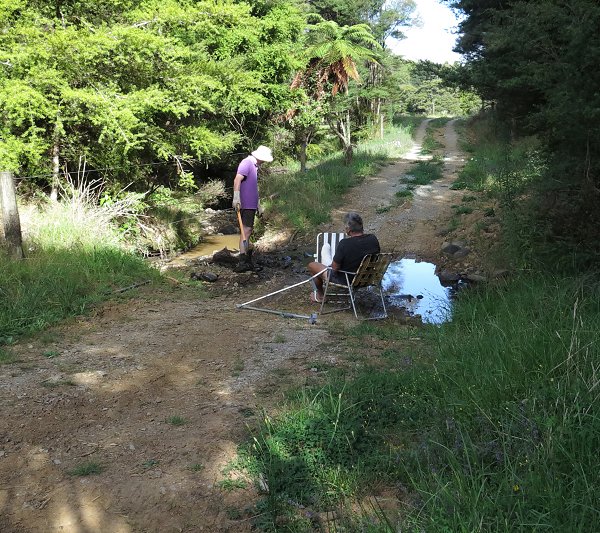 There was a leak in the main water pipe where it goes through the stream near the back of the farm and Stephan had left it as a minor, five-minute job he could do whenever it became urgent or he had a spare afternoon.  Over the last few days more water has been flowing out of the joint (higher pressure for some reason, or an animal walked in the hole which Stephan had previously dug to partially expose the problem?) and its repair became more pressing.

I gathered the tools we'd need and put Stephan in the ute, with a deck-chair on the back for him to sit comfortably as a repair consultant while Jim and I dug up the pipe and refitted the joiner.  It wasn't complicated, just required a bit of care when digging, to avoid damaging the pipe and the joiner and a bit of back strength while digging out the earth and rocks.  The stream has changed course slightly and the pipe must have been pushed a little to the side of its previously straight course, putting pressure on the joint. 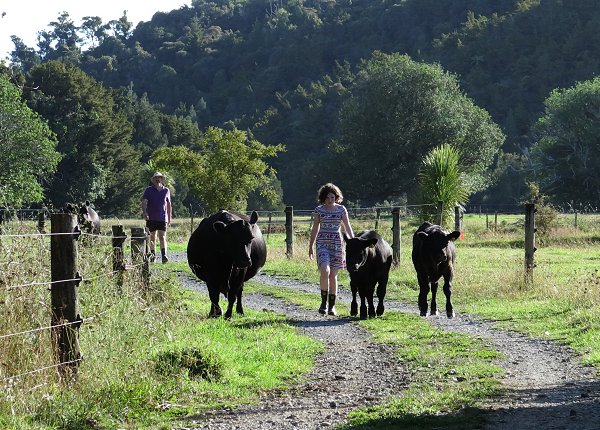 We dropped Jim off on the way back to join Thea, who'd been feeding leaves to the house cows again and they walked them in for the night.

Thea talks to the cattle like an old cow-hand. 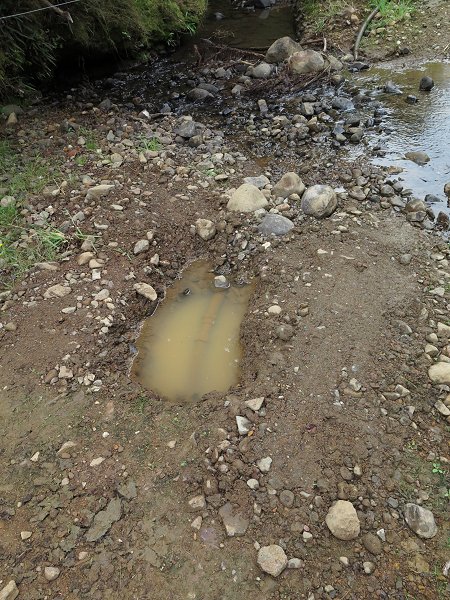 The water leak appears to have been fixed, the sediment slowly settling down because the water around the pipe is no longer moving. 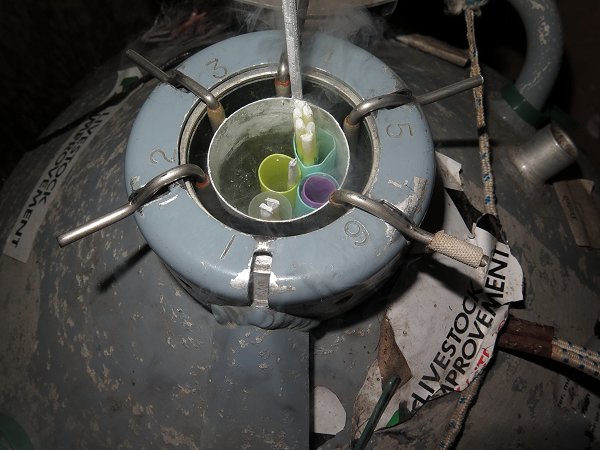 I took this picture so I could use it as a record of the semen I still have in the bank.  It's better to reconcile my records at the computer, than while holding the semen straws up in the warm air.

I've deliberately used a lot of straws I've had for a while this season and now have only these nine left: six of the double-defect-carrier CA Future Direction, one of his single-defect-carrier son Ardrossan Connection X15 and two of Schurrtop Reality X723, sire of the best bulls I've bred, including Joe 90, 87 and 89.

I'll fish out the empty purple and green containers before I send the bank back to Greg. 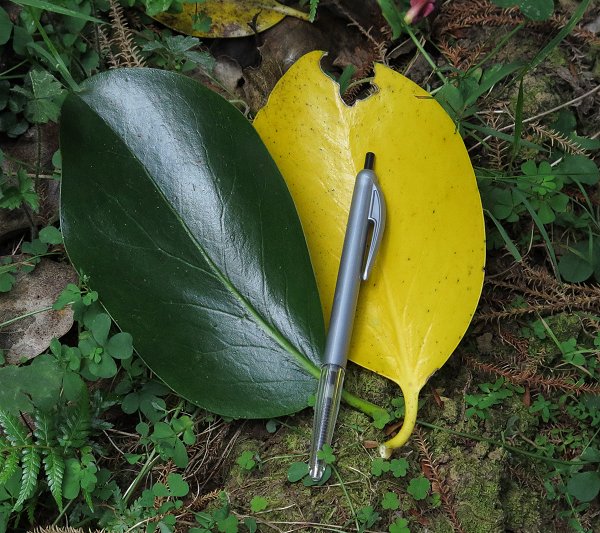 I spent an hour or so Ragwort hunting this afternoon, wanting to collect some flowering plants I'd seen in the Big Back.  These Puka leaves were on the ground under the Puriri tree in which the vine is a large epiphyte. 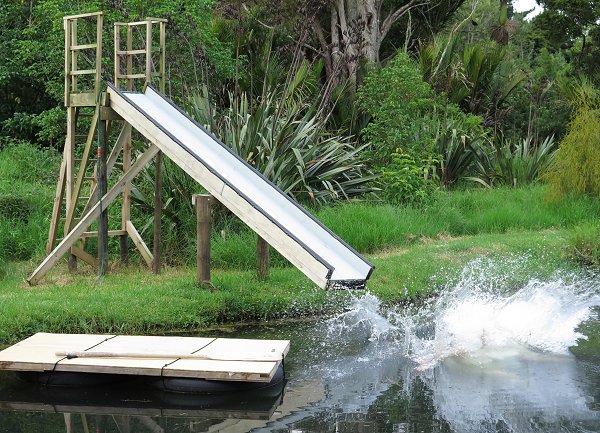 Actually today was the third day I went in and because nobody else was around I could try the slide out at its fastest speed, without togs!  It's fantastic fun.  No wonder all the children run round and round again and again to repeatedly experience its very short thrill.

I took my own pictures, just for fun.