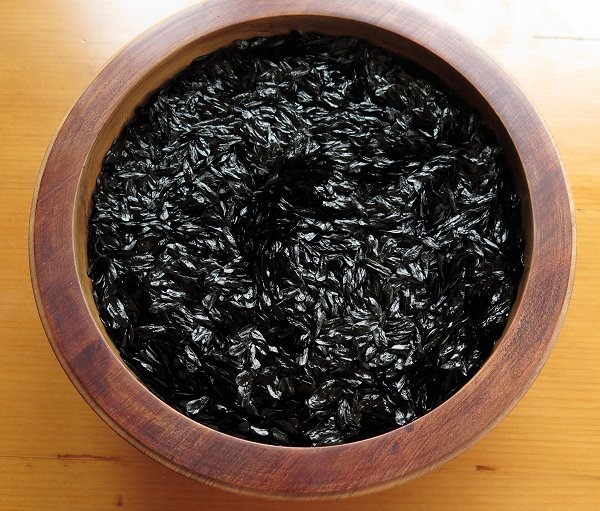 The flax seeds are ripe.  I collected this bowlful because they're so lovely to run through your hands.  They move like a liquid.  The shiny surface is hard and smooth and they're light so they sound tinkly as they drop. 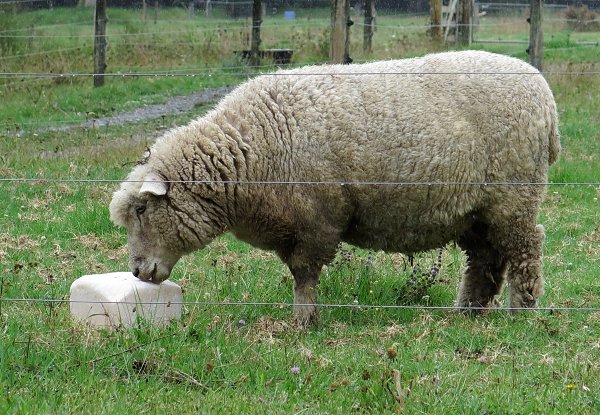 I don't usually provide salt to the sheep, but several of them seem to be enjoying it often. 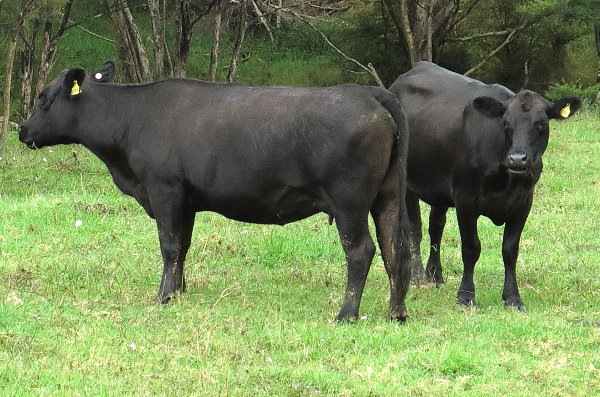 The twins, Meg and Gem, who don't seem to be together so often at the moment, perhaps because their primary link at present is with their calves.

They're in light condition but not too bad for near the end of their first lactation and I'm fairly sure they're both back in calf.

William and Elizabeth came out to do some lawn helping again this morning and assisted me with a particular job I wanted to do: one of the younger sheep has been looking horrible for a couple of weeks and in the last few days as if it might just go off and die!  It's still eating and moving around with the others, but just doesn't look right.  The first thing to do is drench an animal like that, to remove the stress of any internal parasites, so we called the sheep in, corralled them in the milking shed and William grabbed and held the animal in question - which turned out to be a ewe - while I gave it some oral drench.  Hopefully that will make her feel a lot better. 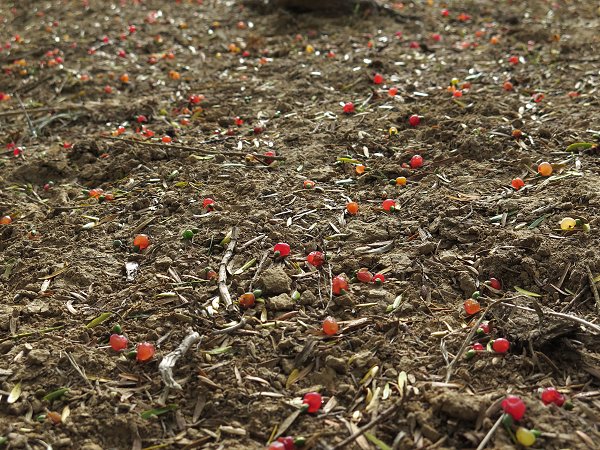 As I rode up one of the tracks out the back, the sunshine caught a mass of Totara berries on the ground, looking like little jewels.

Alan popped in with dinner for us, made by Jackie.  Jackie is an inspired cook and we're both feeling very spoiled by the lovely food she's been bringing.  These are not just dinners as a stop-gap, these are culinary treats! 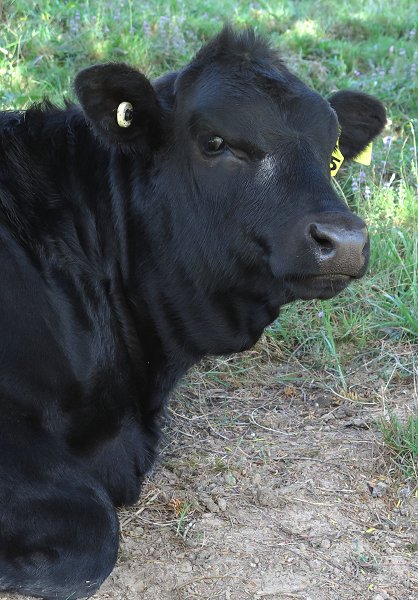 475's daughter with her fat neck indicating the quantity and quality of the milk her mother provides.  475 was the last daughter of grey 16 and her daughters have (mostly) been really lovely heifers and cows.  I will keep this heifer and hope she turns out as well as the best of the rest.  Her sire was bull 106. 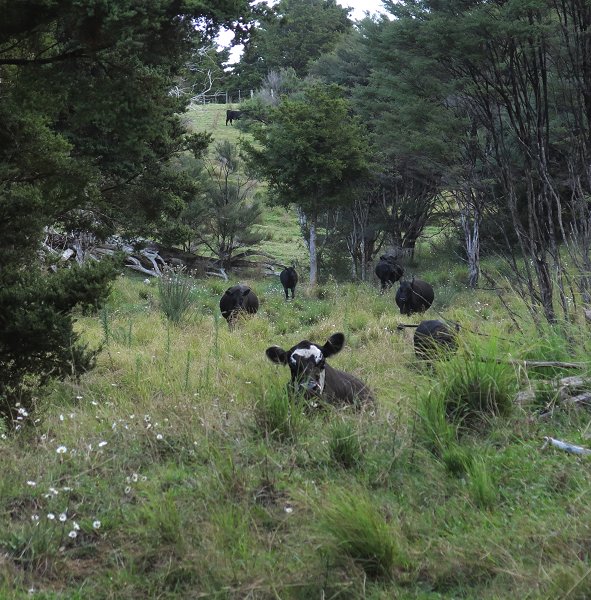 I always feel loved when a whole lot of animals come to my call.

These cows are in the Middle Back, coming down to the gate at the bottom of the paddock in to the Back Barn.

Stephan caught a cold from someone last week and having fended it off for a while, I've been feeling it coming on over the last few days.  For most of today I lay on the fold-out bed in the living room with Stephan, feeling dreadful and watching recorded television programmes.

One of the insemination mob, Dexie 121, looked rather like she might be coming on heat.  There's no way I could inseminate her tomorrow, so I fetched the young bull and put him in with them for the next 24 hours.  Better a pregnant heifer than another delay.

We tried our best to get the hospital to schedule Stephan's first check-up at the Kaitaia Outpatients Department, but there was to be no Orthopaedics specialist clinic there at the right time.  So today we had to make a very early start to get down to Whangarei for an appointment.  It was a tough day!

First we had to borrow a car.  Stephan's quite tall and I'm not, so when I drive our ute he ends up in a cramped position because the bench seat needs to be forward enough for me to reach the pedals.  There was no way he could have travelled for two hours with his foot like that.  So Elizabeth and William offered us either of their cars and we went yesterday evening to their place to see which one would suit best.  It seems that some of the four-wheel-drive cars have either been planned well, or are coincidentally just large enough that the passenger seat when shifted far forward and with headrest removed, will lay back and fit down in front of the rear seat to provide a level leg-rest for a passenger seated in the back.  That meant Stephan could travel safely and comfortably with his foot elevated.

I slept very poorly last night as a result of my cold and every time I woke up, worried about not getting enough sleep to drive today, which only made it all worse.  Knowing I'd need to take things slowly, we allowed an extra half hour for the trip, meaning to stop and have some Thermos coffee along the way, and because we were (unusually) well organised, managed to get away ten minutes earlier than planned.  It was lucky we did, because there seemed to be more road-works than open road on the way down and we needed all the extra time to get there, without the planned stops.

I dropped Stephan off at the front entrance and then drove off to find parking.  Hospitals can be very poor hosts: they invite you to come and then provide insufficient parking space!  I drove around every parking lot provided and eventually at the last point stopped, expressing my frustration and hopelessness to some men sitting having a tea-break from their earth-works at the edge of one of the parking areas.  One of them very kindly suggested he'd move his small earth-moving machine so I could park the car where it had been.  I was extremely relieved and grateful.

Up the hill on the public road, I found a woman with an identity tag and asked her how to get into the hospital, since I was somewhere I didn't recognise and she gave very succinct instructions and, emerging from a stair-well, I found myself at the door of the Outpatients Department!

New Zealand health system appointments seem to be very loose affairs these days.  Stephan was called into the plaster room where a very charming young guy removed his cast and eventually an Orthopaedic Registrar came in, looked at his foot, made a couple of comments to us and wandered off.  She came back again a couple of times, wrote the odd note, sort of answered some of our questions.  Bearing in mind this was the first time I'd been able to ask a medical professional about what had been done and what could be expected and the first time Stephan had been in his right mind in their presence, we had a few things to ask.

The plaster man offered to make Stephan a "bumper bar" for his toe, since the pins were by then riskily exposed.  The Registrar told us it would be unnecessary and that we could just be careful.  Yeah, right.  I regularly fall over Stephan's huge feet under ordinary circumstances; I could imagine the horror of bumping into pins going right through the bones of his toe!  We and the plaster man prevailed and Stephan came out with a workable solution.

We had a lovely lunch with my mother's former Vicar's Warden, Sheila, with whom we try to catch up with when we're in Whangarei, then made our weary way home.  I stopped twice to make coffee, so it was a relaxed trip and going home is always reasonably pleasant because the further north one travels, the less traffic there is on the road. 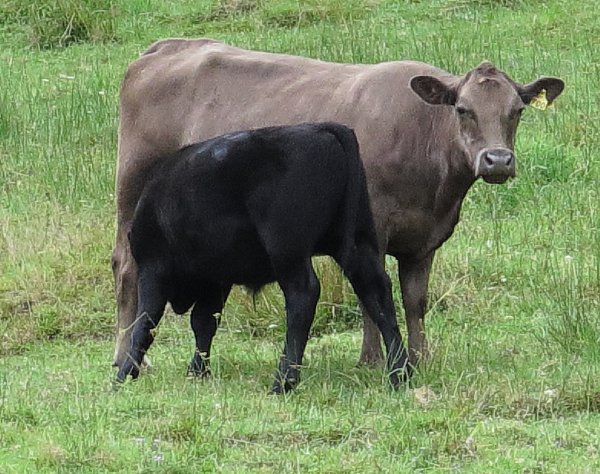 Endberly is thin, but only as light as any of the first-calf heifers and her son is doing very well. 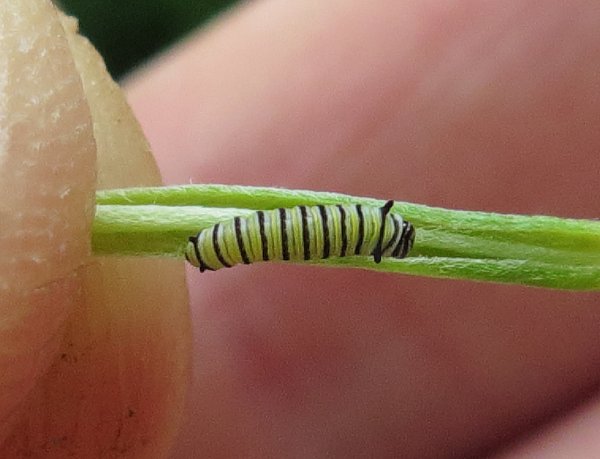 I watched a Monarch Butterfly lay a number of eggs on a couple of tiny Swan Plants in a pot on our deck a few days ago and then went and squashed a lot of them, because the plants could not support more than one caterpillar's appetite.  Today I noticed a couple of tiny caterpillars, so took this one carefully off the plant and across to a much larger plant in Jane's garden. 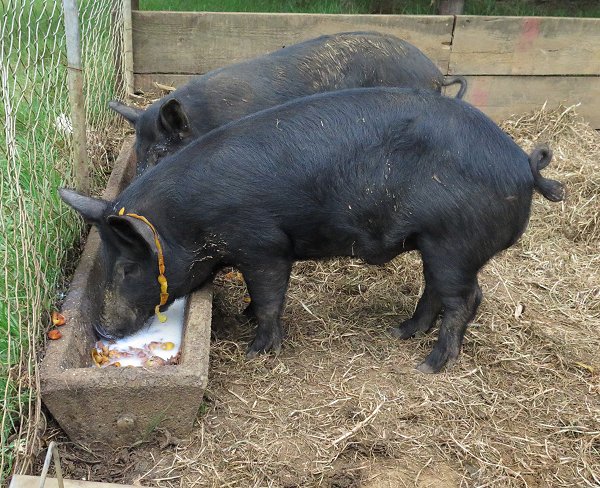 The pigs again.  I think they've grown in the last three weeks.

We had our first District Nursing visit today, which means Stephan can stay lying with his foot up, rather than having to travel to town to have dressings done.  It was good to be able to ask lots of questions about the usual process of wound healing.  I received instructions on how to do the next dressing before another Hospital appointment on Monday.

I think Victoria 118 may have improved slightly.  Her feet are worse, but she doesn't seem quite as weirdly alert as she has done for the last few weeks.  She keeps moving around the paddock quite a bit, which is why I'm continuing to let her live.  She's terribly uncomfortable on her feet - or at least she is when she first gets up - but apart from being quite thin, continues in reasonable bodily health.  I'm not sure I could personally shoot her in her current state; if she went down and was obviously suffering I'd do it, but not while she's still able to move around and eat and drink and be with her friends.

There are some clucky chickens around and a few days ago I prepared a little cage and moved one of them in to see if she'd settle on a new nest.  She did so, so this evening in the dark I took six eggs and placed them carefully under her.  We haven't had chicks for ages and I think it would be rather nice - some to eat, since we haven't eaten chicken in just as long, and some to replace some of the older hens which don't lay much any more. 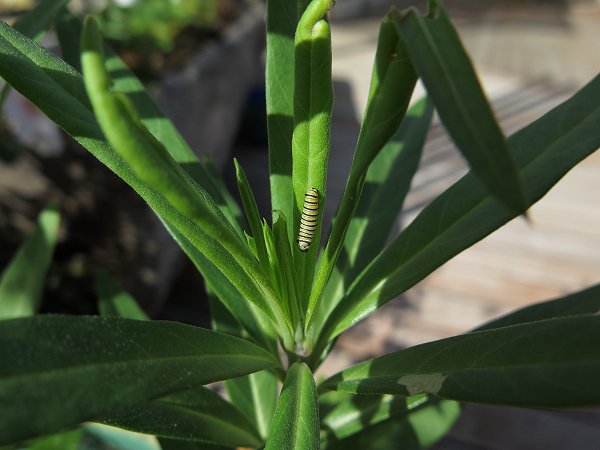 The remaining caterpillar - and then it disappeared.  I think there are too many predatory wasps around this season.  If we want to help the Monarchs, we may have to grow a lot more Swan Plants and provide some sort of anti-wasp protection for the caterpillars.