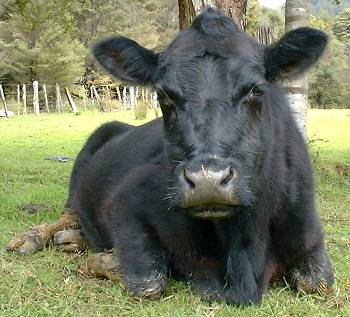 closed on Friday at midnight.
The list of entries received is available on next week's page.

I was on my way out to the back of the farm to check on the cows there, when I noticed that 359 was standing uncomfortably, so stopped to check her. 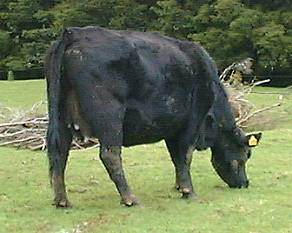 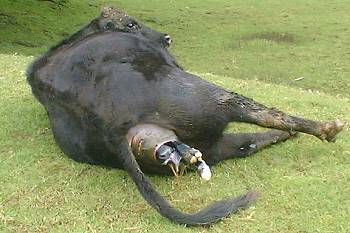 In the picture on the left, a membrane bag full of fluid had already been pushed out and then burst, so an unknowing passer-by might not think any thing interesting was going on at all!  She's sucking up all the fluid from the ground, before lying down to get on with birthing her calf.  Sometimes, like today, this process makes me feel really queasy: there's so much slurping of so much fluid. 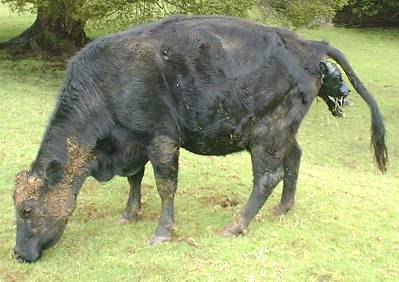 359 knew there was something exciting going on behind her, but couldn't quite get to it!  I thought of Dr Doolittle's Pushme-pullyou: the animal with a head at each end.  Seeing a small head with blinking eyes in such a position is really quite strange. 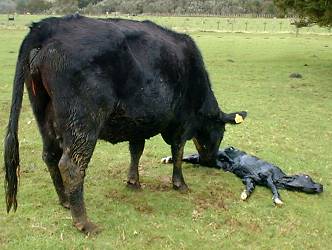 Then she lay down again and just got on with it.  The calf looked rather odd for a while, with neck stretched out, but after a couple of minutes shook his head and sat up.  359 appeared to spend the rest of the day pushing him around the paddock, not wanting to let him feed.  This is her second calf, so she ought to know what to do! 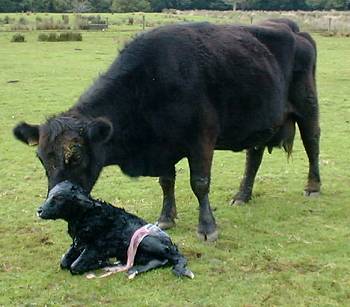 Later in the afternoon, Queenly produced a heifer calf, with a great deal of noise, which drew us out from the house to investigate. #16 produced her calf sometime in the night, a heifer again.  The calf's sire is a long-dead bull from which I had a few straws left in the bank last year, and sire of 359, above, whose milk production doesn't appear to be very good, so I thought I'd try that bull with a couple of cows with more milk than they need.  The other cow is 348, who is 16's half-sister, mother of the backwards baby and assistant wet-nurse to Ivy, when she had her first set of twins.  Confused? 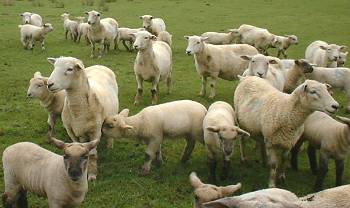 I've left the ewes and lambs to themselves for the past few days.  I could see them from the house, across the flats, but thought I'd better go and have a closer look, to ensure that all were healthy and happy.

The lambs really aren't as good as I'd hoped, so we won't be buying another ram from that particular breeder!

I've been waging war on the rushes over the last few weeks - well, it's been a slow campaign, but one whose progress is evident in many paddocks - but when I see the calves using them like this, I wonder if I should leave a few patches in some of the usual calving paddocks.

I gently urged the calves to stand and rejoin their mothers and gradually moved them up the paddock to where the gates were open for them to enter the next paddock on their round.  Some of the cows were very sensible and made sure their calves were with them as they went to the new paddock, others just dashed off as soon as they spotted the fresh grass, leaving their babies behind!  The most recently calved, #371, stayed behind with her own calf and the other five who'd been deserted by their careless mothers!

#79 calved this morning; this year she chose a part of the paddock not right next to the drain.  If they're in the same calving paddock when their time comes, I've observed they often choose a place not far from where they calved last time.  A heifer for her again, this time to Quadrille. 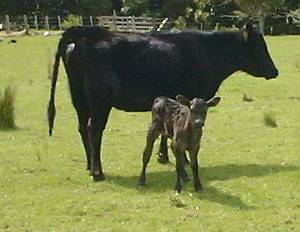 Later in the day, on my way back from checking the cows further out on the farm, I noticed #390 was lying down in labour.  She's one of the three-year-old first time calvers, so I lay down in the paddock for ages to watch her, but she wasn't making very fast progress.  I eventually went over for a closer look (I'd been keeping my distance, since she didn't seem keen on company) and saw a pair of nostrils, so I went home for a cup of tea and something to eat; I'd been out for hours!

From the house a little later, I saw her lying flat out on the ground, having just given the last push.  The calf was fortunately clear of all the membranes, still attached to and partially still inside her mother who seemed completely unaware of her presence.  The calf had her head up, shaking it and sneezing, as they do to clear their airways and 390 looked dead!  She lay there for about three or four minutes before she finally raised her head and sat up a bit; she still hadn't noticed the calf.  After another minute or two she looked around and noticed the now rather active youngster behind her and leapt up to clean her up. 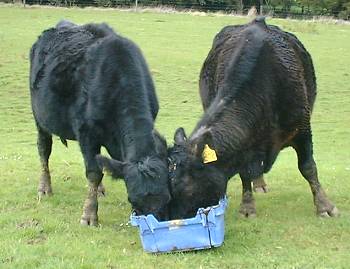 I've been giving the three cows in the house paddock a regular molasses treat, which they very much enjoy!  Sybil is actually getting quite pushy about it and comes thundering over to me whenever I come into the paddock from the house.

Inga 11 and Sybil 808 have (sort of) learnt to share their molasses.

It was a beautifully fine day, and we'd been planning to shear the young sheep if the weather was still fine, so in they came.  They really dislike the mud along the track, so it was a weaving path we took.  Fortunately none of them ducked under the fence and made our lives difficult - rather surprising since the fences are all turned off at the moment while there are very small calves around the farm.  Damian was rather slower than the others: he has a sore foot and is getting on a bit. 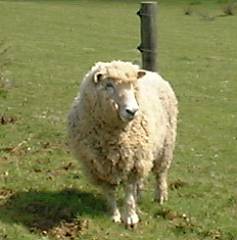 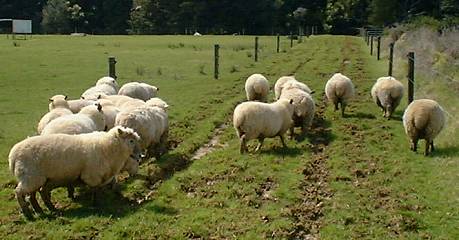 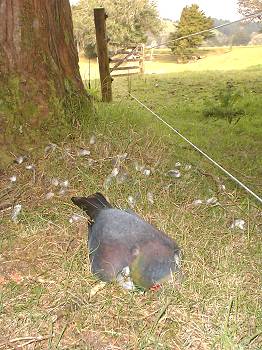 This was a really sad find: I had walked through here less than two hours previously and now, as we walked back to see if some more cattle had come down to one of the gates, here was a dead Kukupa.  Its body was still warm. 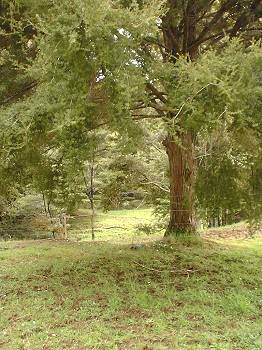 At first we thought something must have attacked it, with all the feathers lying around, but gradually pieced together what we thought must have happened: Kukupa fly really fast and they're extremely good at flipping through apparently tiny gaps in the trees.  I think this one saw a nice open path under this tree and through the ones on the other side of the track, but didn't see the fence.  Its neck was completely broken. 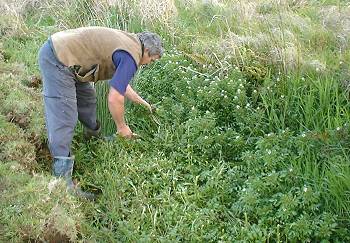 A year or two ago, Stephan brought a couple of tiny watercress plants from the river where they sometimes grow (until they're washed away by the next flood) and planted them in one of our large drains.  For a long time they were hardly visible, but this year they've obviously taken off!  He picked some to take with him to Panguru on Friday morning, because he knows there are some people there who will be very pleased to have it! 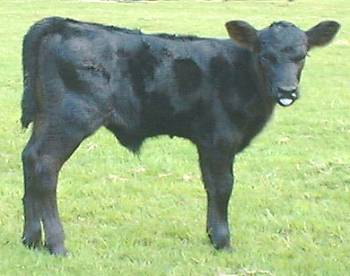 Here's Ivy's twin, getting stronger every day.  She's only just really started running around, which may be because she's the only calf in the paddock, or because she was a slightly premature baby and has been catching up on some growth and rest.

Below, the Kauri shoot in the greenhouse and the pigeon chicks in their nest. 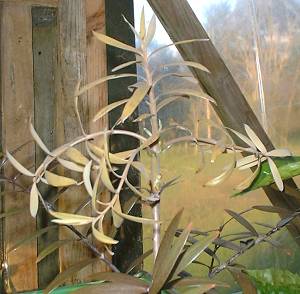 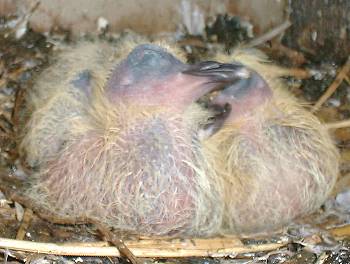 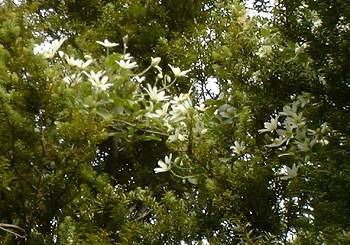 The Puawhananga - Clematis paniculata - vines are all flowering again and I've discovered another two I haven't seen before, as well as seeing one I thought had died.  The latest discovery is in a Totara tree along one of the fencelines near the back of the farm.