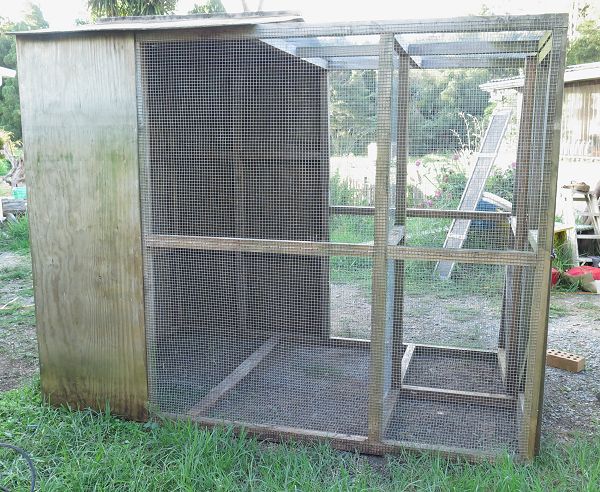 We bought an aviary!  Stephan spotted the advertisement in the local paper and I rang, to discover it was the woman from whom we purchased Poly a few months ago.  We arranged to go down to the bottom of Takahue Road this morning and pick it up.

Now we have no cats we've both been thinking keeping a few more birds would be rather fun.  It happened that we sat beside someone yesterday who also has a couple of aviaries of budgerigars but is wanting to reduce their number and so we will go and see them about getting a few more, when we've tidied this cage and decided where to put it. 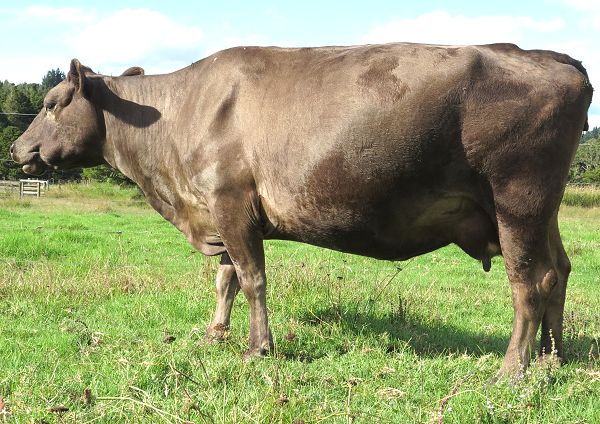 This is 607 without a big lump under her belly (although she does appear to have lost her whole tail). 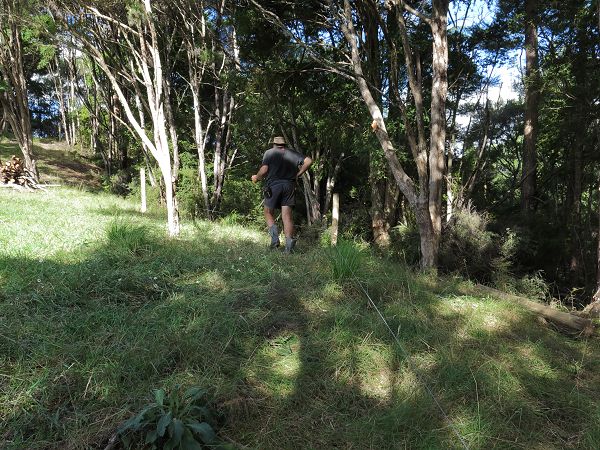 Having put all the key posts in up the hill (all thumped in, I think), Stephan pulled up the first wire. 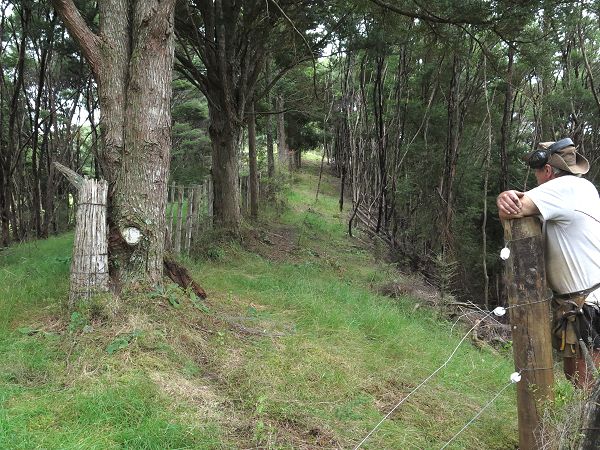 We had the foresight to think about the next fencing change which will need to be made along the top of the ridge here, between the Swamp East and the Camp Paddock and so Stephan put the strainer for the top of the new fence where it can be used for the fence which will replace the existing ancient one in this picture.

The slope down to the right is very steep, so we'll fence along the top of it here and exclude the cattle from that face.  At present the cattle come up from the bottom of the Camp paddock to a small area of grass (sunlit through the trees in the middle distance), but I think we'll fence that area into the Swamp East so they can access it from the top of this hill and that will enable an easier division of the Camp paddock around the deep, forested gully which runs down from the boundary fence.

We had another all-day power cut, this time to affect some repairs around one of the big pylons which carry the only line into the region, which had suffered from a big slip up in the Maungataniwha Range in the last few months.  With increasing winds as ex-Tropical Cyclone Pam approached, I wondered if the job had been completed when the power came back on surprisingly early, in the early afternoon.  According to news reports, the job was done successfully and power supply is secure again.

The Cyclone, having wrought havoc up in the islands and now causing quite a bit of mess south of here, passed us with only a few building-shaking gusts and less than 12mm of rain. 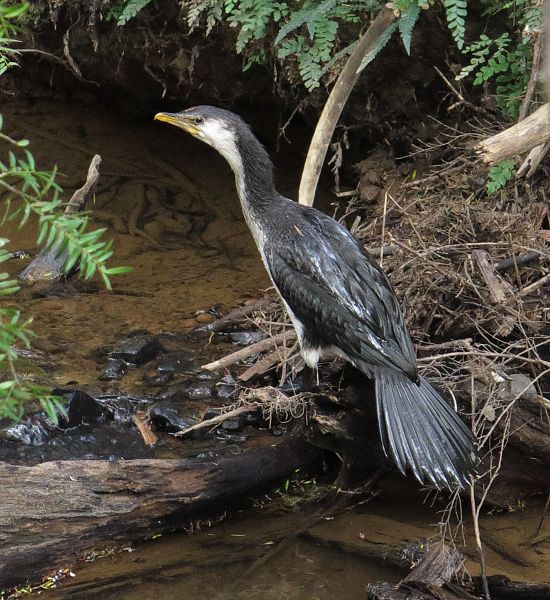 I took the GPS for a walk around the new fences in the Swamp East and Frog paddocks, marking each fence post, both to count how many there are and to add to the measure of the whole riparian fencing project for an eventual report to the Regional Council.

A Little Shag, Phalacrocorax melanoleucos, flapped out of the water where it had been hunting for food and perched for a while on a partially-submerged log in the stream.  I often see them in and around the streams. 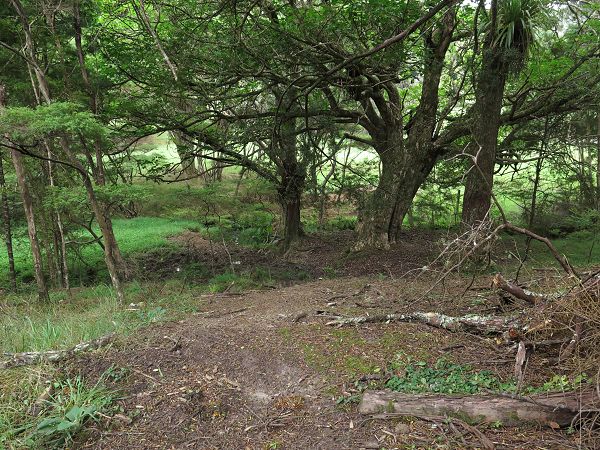 I went to see Stephan and helped him by pulling a couple of wires - he walked around the fence-line with the end of the wire and I pulled from the spinning jenny up the first slope, to make it easier for him further around.

This area down a slope under some very large Totara and Puriri will now be in the riparian reserve.  To the left of the three big trunks the cattle clambered down into the stream and out the other side, causing scars in the bank which have caused root damage to the big trees.  Those trees will now be able to heal without further injury.

These areas seem extensive but because of the tree canopy don't grow much feed, so are better off without cattle tramping around the trees. 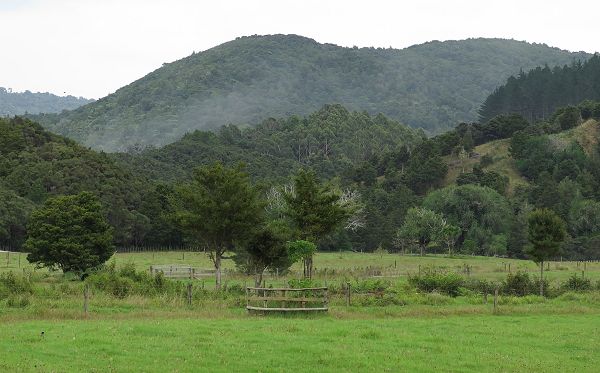 There's still quite a lot of wind as the tail of the cyclone continues down the east coast, so I was surprised to see a lot of fertilizer or lime dust floating up from further up the valley.  We're not the only ones who get caught out on windy days when the trucks are available and the stuff has to go on. 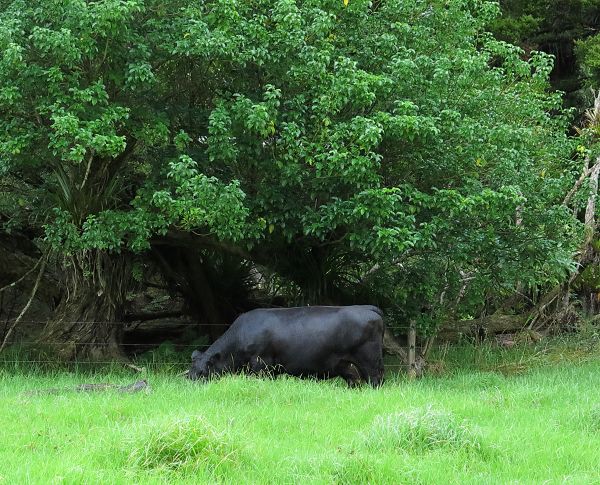 After the big rain two weeks ago and very warm overnight temperatures since (12 - 18°C), the Kikuyu grass is belting up out of the ground.

Imagen (pictured) and Zella went into the Pig Paddock this morning, with grass up to their bellies.

The Puriri tree in the background is the regrowth of the one which fell apart in 2007 and has been regenerating itself ever since. 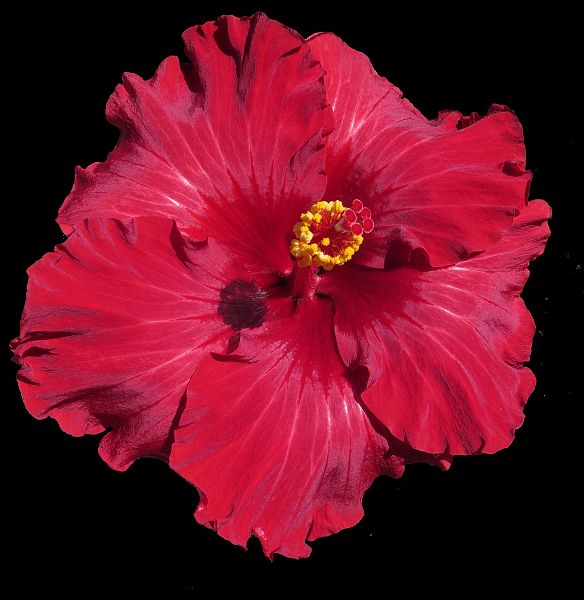 The Hibiscus plant my sister, Rachel, gave me continues to give daily pleasure at this time of year with these luscious flowers blooming in the warm sunshine. 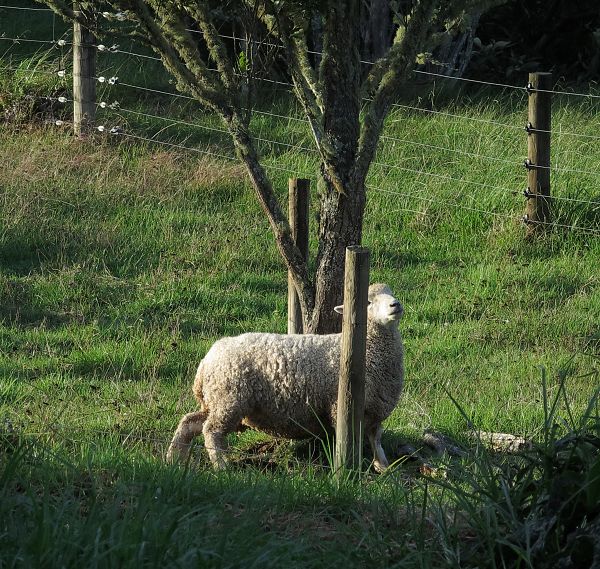 I watched this sheep rubbing its rear on the tree with the most comical expression of bliss in its whole countenance, but by the time I grabbed the camera the moment had passed and it had moved on to scratch other places.  There are probably lice and ticks to make them itchy and I wonder if sheep's wool itches sheep as much as it does some people?  (I don't really, but it's a funny thought.) 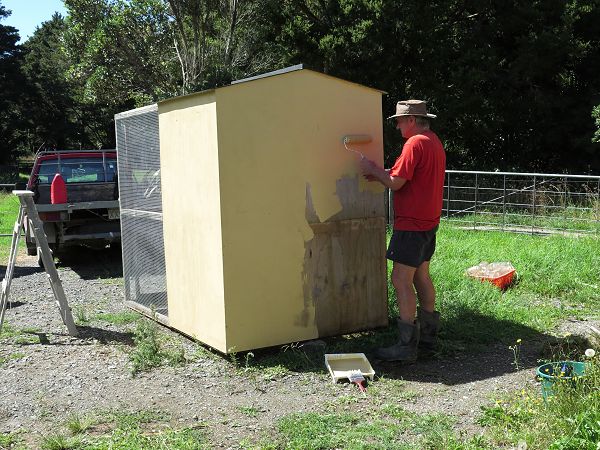 Stephan decided to paint the aviary the same colours as the house, so finished scrubbing it clean inside and out (scrubbing by hand since the water-blaster had blown up early in the piece), waited for it to dry and applied the roller and brush.

In the afternoon we went to visit the people who have twice as many budgies as they want and talked about how many we might like to have.  They're such pretty little birds and we'll collect them in a couple of weeks, when those which are still rearing young have finished that task, so we don't inadvertently leave abandoned chicks. 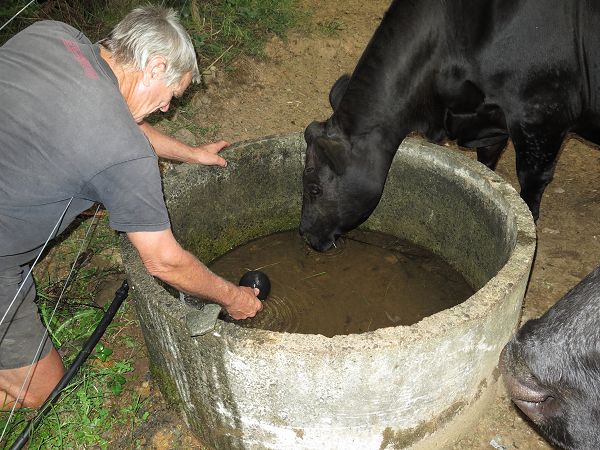 I drafted the bull calves and their mothers out of the big mob this morning, since they're beginning to look like they're maturing quite quickly.  I'd be surprised if a bull were fertile before several more months have passed, but best to be conservative in these things.

The rest of the mob, now 63 in number, went across the road to the lesser paddock, about which they didn't seem particularly pleased.  Later in the afternoon we noticed they were still complaining rather more than they should be and went to make sure everything was alright.  The trough was filling so slowly that there wasn't enough water for everyone who wanted it.  I didn't think that was the whole answer, since they were also all still hanging around at the bottom of the hill, where normally they'd have gone galloping off to the extremes of the new paddock to graze.

After checking the pipes which feed the trough and finding no fault, Stephan took the valve to pieces and found several bits of rusted metal from the old fitting blocking the water flow.  Once they were removed, the trough began to fill at the proper rate and the cows who wanted to drink were able to.

I don't like unhappy cows and they were not happy about the paddock they'd been offered, so I opened up the larger part of the hill and let them all go.