The week beginning the 7th of February 2015.
Saturday the 7th 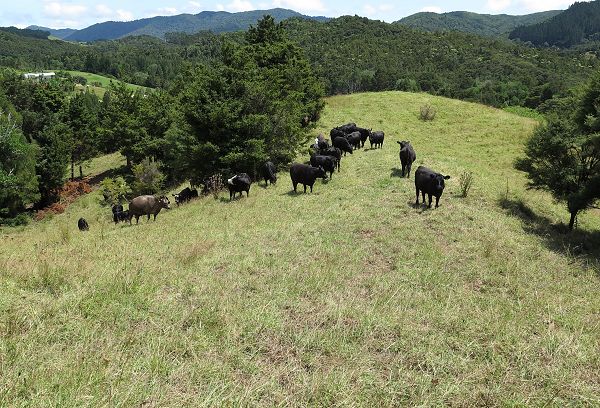 The main mob of cows and calves were ready for a move, so followed me as I called them up the hill... 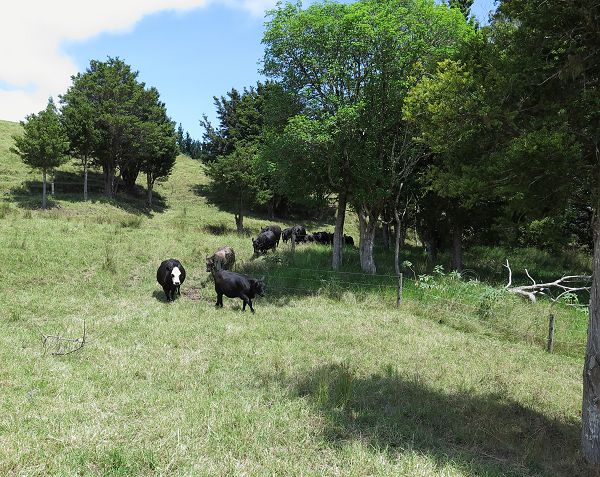 ... and around the bush reserve area.  Then they all pelted down the slope to wait at the bottom for me to open the gate into the other part of the Over the Road area.

I rode out on the bike so Stephan could come back for lunch from the Back Barn and as I stood under the trees, looked around on the ground to see this great variety of little seedlings. 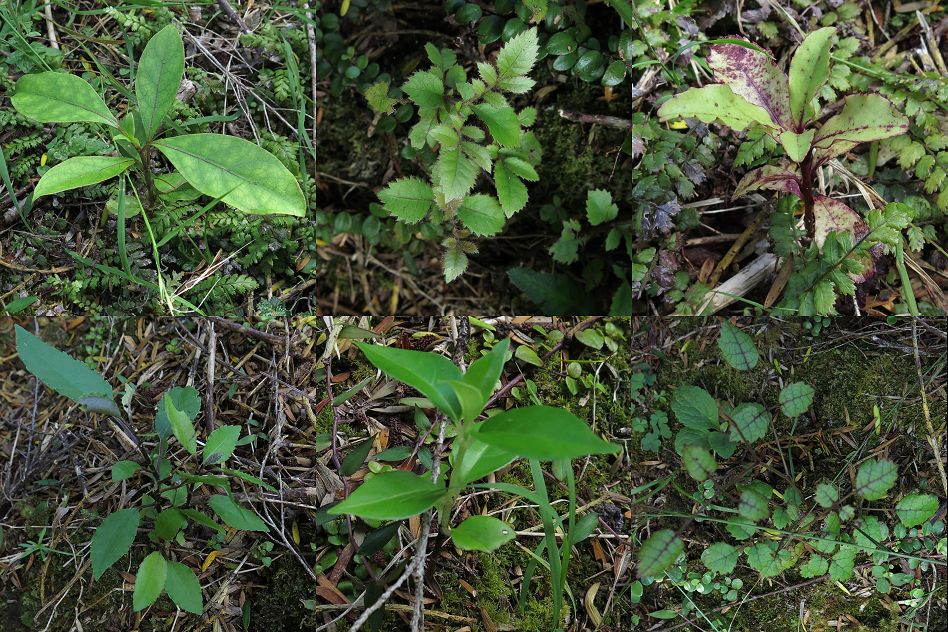 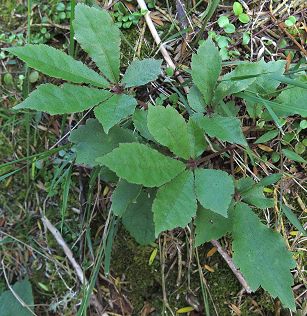 At left is Pate, Schefflera digitata.

Lots of seedlings like these ones will end up on the reserve side of the fence and will become trees, filling in the riparian strips without us having to do any planting at all.

This is the stream just below that intended fence line and the banks will require regular patrolling for weeds like Ragwort in particular and Beggar's Tick shown below. 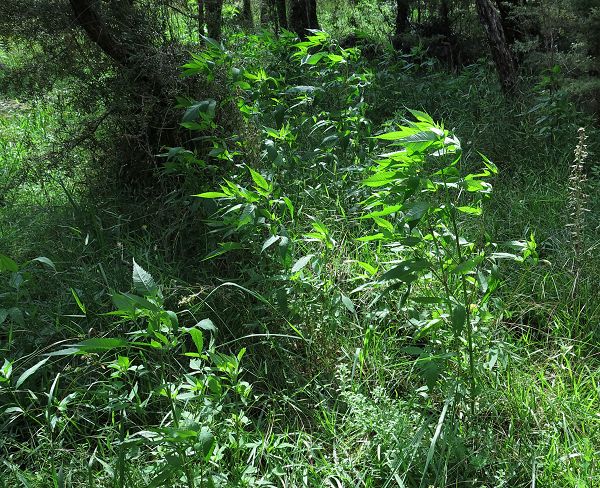 Lots of Beggar's Tick, Bidens frondosa, still germinates in this area between the eucalyptus plantation on the other side of the boundary and the stream.  I find occasional plants in other locations around the farm, but so far we seem to be managing to thwart any further spread. 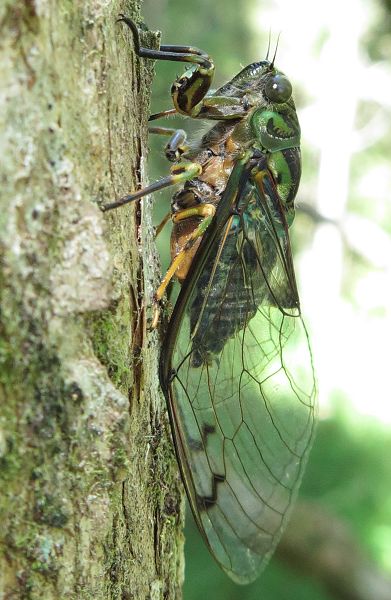 The cicadas are so loud at this time of year, particularly when walking through areas of young Kanuka.  This one kept moving around the tree while I tried to photograph it, but I succeeded in the end. 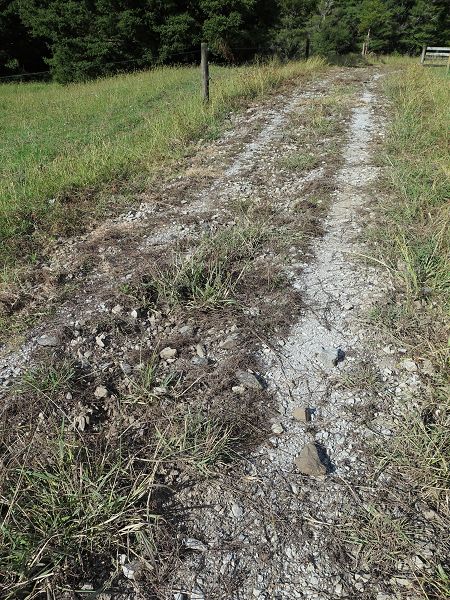 When I first rode along this track and bounced over a number of large bits of loose rock, I couldn't figure out what had happened: pigs have worked their way along the length of it, rooting under the gravel and disrupting what had become a fairly smooth surface.  Feral pigs are a royal pain in the rear! 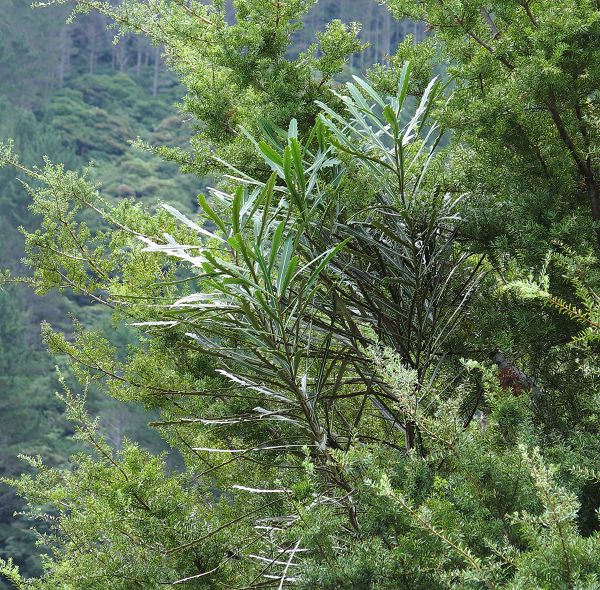 This is a Lancewood tree I've been watching for a few years.  It's starting to branch out a bit at the top, by the look of it. 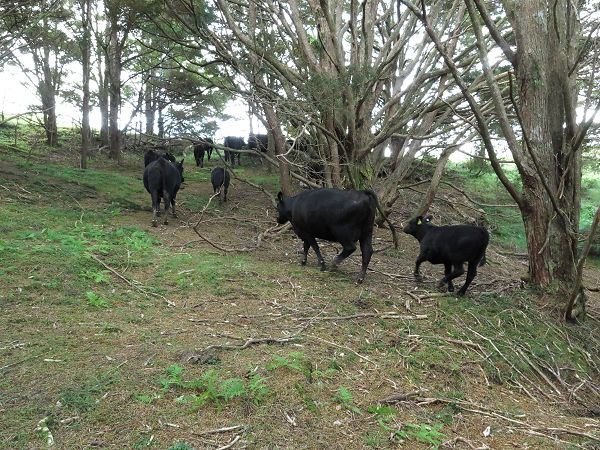 I called bull 128's mob from the bottom of the Big Back North hill and heard the bull for a long time, growling along the bottom of the slope as he came in my direction.  I assumed the cows would be following him, but they did not.  I shut him in the lane so I wouldn't accidentally meet him in the paddock again and went to find the cows, right along at the other end, above the top edge of the big swamp.

I got them all up and moving and then followed them the way they wanted to go, which was up the hill to the top of the ridge and then along and down to the gateway.

Areas like this under huge Totara trees will never grow any grass because of the lack of light, but the cattle don't damage these trees and there's a lot of shelter here, from the heat in summer and the cold in winter.  If we cut all the trees down, they'd need to eat more grass than might grow here just to keep warm because there weren't any trees. 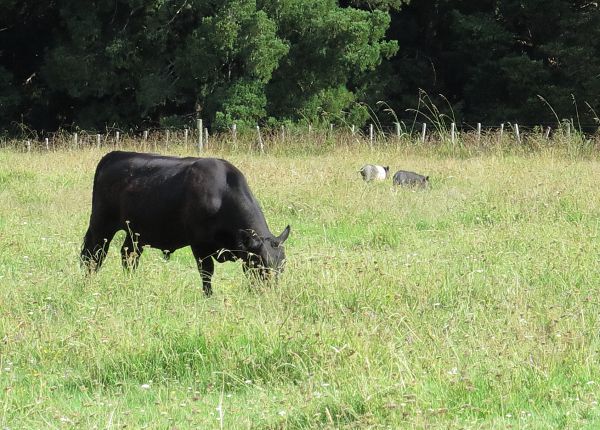 The trespassing pigs are back again...

I flew down to Auckland (this could be my last trip of this nature, since Air New Zealand is ceasing to serve the region at the end of April).  My mother, Jill, is about to be admitted to rest-home care.  I think this is an overdue move, but am pleased it is now happening.  Alzheimer's Disease is a strange thing and while Jill still sounds much as she ever did, she has no idea how to do very ordinary and necessary things, right down to managing her personal hygiene.  She has had carers coming in to help her two or three times a day for some months, but she really needs coordinated care and continual oversight, which she'll now get.

I bussed into town, Jude picked me up from Karangahape Road and we went straight over to Selwyn Village to get on with the job of sorting and packing Jill's possessions.  Only a small fraction of the truck-load Rachel and Jude helped her bring to Auckland can go into the small room she will henceforth inhabit.

In the evening Jude dropped me up at Ponsonby Road and I went to the Women's Bookshop for an author event: Barbara Ewing was there to launch The Petticoat Men and to read to us from it.

At the bookshop I met up with a couple of the lovely women from the Women's Studies Association and afterwards we all went to meet the others of the organising committee for a meal and discussion about the Summer School over Anniversary Weekend in Kerikeri.

Afterwards we went to a Gelato place for dessert and continued our happy evening.  In my current rural life, isolated from regular feminist company, such meetings become shining bright spots in my year.

Stephan, early this morning after milking Zella and feeding the calf, drove to Auckland to bring a load of Jill's stuff back home.  He arrived at the village just after noon and worked for a couple of hours with the help of nephew Issa and Jude's husband, Roger, loading furniture and carefully-packed boxes for the trip home.  It soon became obvious that there was far more stuff than would fit on one trip and in any case, Jill's move in to the rest-home was delayed by a week and Jude said she'd like it if we came back on that day as well.

Just before 3pm Jude took me back to the bus and I went out to the airport to fly home - with stitches still in my back, I would not have been comfortable travelling home by road for several hours.

Jane picked me up from the airport and I came home and did all the evening things and a couple of hours later, Stephan arrived safely home. 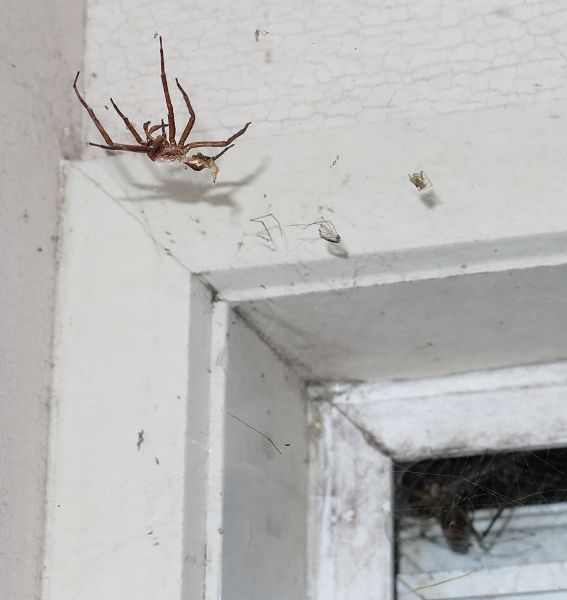 We've had another resident Sheetweb Spider in our bathroom for a few weeks.  It has just finished moulting another skin and leaving that hanging in the web, has retreated to its hole in the corner of the window, a few sizes larger than it was before...

I eventually concluded it was a male spider with his extraordinarily long front legs.  Within a few days of this picture, he'd gone.  I presume he went off to find a mate. When I moved the cattle last evening, I noticed a lump under 607's belly, but when she walked past me the other way today, I couldn't see it, so later went to check her again and found this.

It looks like she's had a puncture wound on this side, a few inches forward of her udder.  Having just had my own stitches out this morning and feeling a little tender, I decided to watch and wait and keep a close watch on 607's general health for any sign that infection had developed in the wound and was affecting her.  I had a quick feel of the area, finding evidence of a small scab, but nothing more alarming.  607 wouldn't let me near her again, after I'd prodded and squeezed. 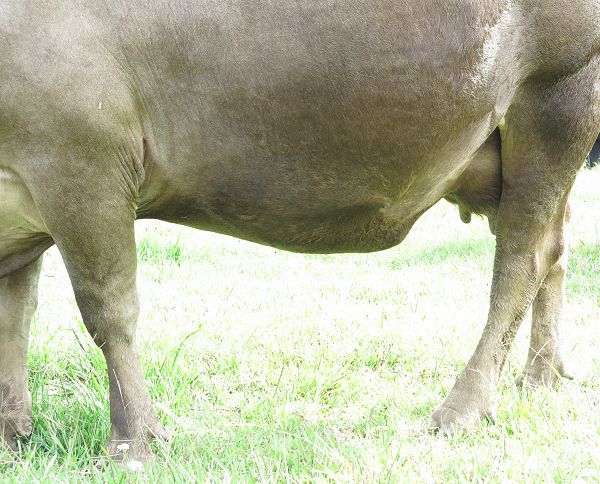 The swelling under 607's belly changed shape and increased in size but it is the normal sort of fluid collection one would expect to see associated with a wound in that area.  It continued pooling more fluid over the next couple of days, all on the left side of her navel, then began to reduce.  607 continued to behave normally and looked comfortable, including when she lay down, so I left her to it and kept checking her daily.

I looked at my calving-date calculation spreadsheet and decided it was time to take the bulls away from the cows.  They've been in for 43 days and depending on the gestation length of the last cow to get pregnant, we should be finished calving by around the 20th of November.

The four bulls went in to Mushroom 1 and after a bit of fighting and chasing each other around, they settled down.

The four mobs of cows and calves spent the night in neighbouring paddocks, so they will hopefully mix without too much drama tomorrow.

The cows, calves and pregnant yearlings are now all in one great big 71-head mob together. 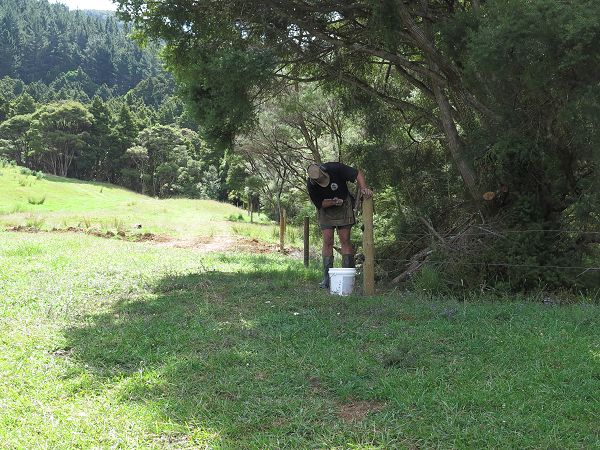 Stephan's life: fencing.  He's loving it and having found someone else to do his trapping job for a few weeks, can do this every day the weather and his own strength will allow.