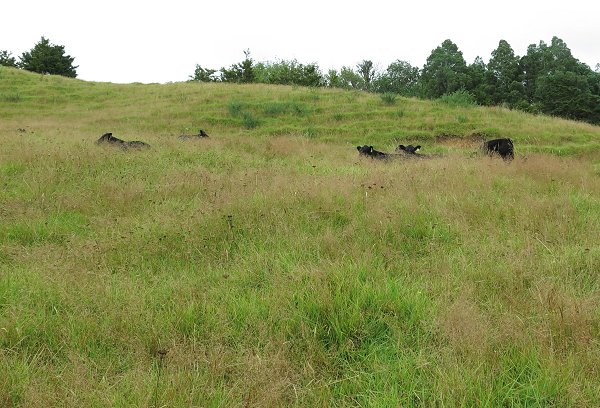 The grass Over the Road is a quite dry and crunchy, but there's lots of it, so that when I came up the track all I could see was black ears where the calves and some of the yearling heifers were lying around. 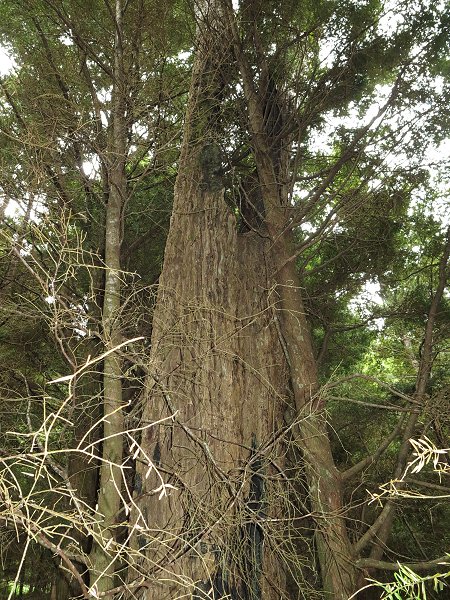 Stephan is about to begin fencing the southern side of the stream running through the Back Barn Paddock, so we went for a walk to finalise our plans there.

I found this Puriri remnant in a grove of Totara.  I don't recall seeing it before.  Puriri wood is so hard that the remains of dead trunks can stand in place for decades.  This one doesn't look capable of standing on its own now, but young trees have grown up around it and hold it in place. 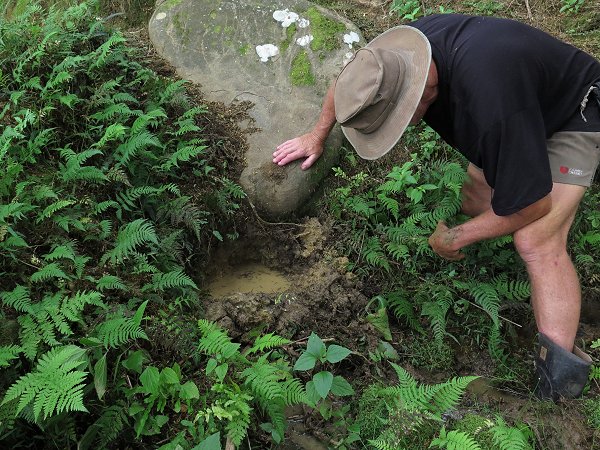 I think we may have come up with a name for the southern part of the Back Barn Paddock: the Spring!

There is a pretty little grove with lots of rocks strewn around, up toward the back of the paddock.  I've long known water came up here somewhere, but have never investigated it properly.  Now that the surrounding soils are not wet by rain, it was clear there was water coming from behind this large, flat-faced boulder.  We scooped out some soft mud below it and waited to see how quickly the water filled the small pool we'd made and then flowed on down the slope.  It wasn't really fast, but certainly constant.  As it travels down the hillside, the trickle gains volume and is a respectable little tributary to the stream by the time it reaches it.  There are "water seams" in these hills, along whose lines the streams form and grow. 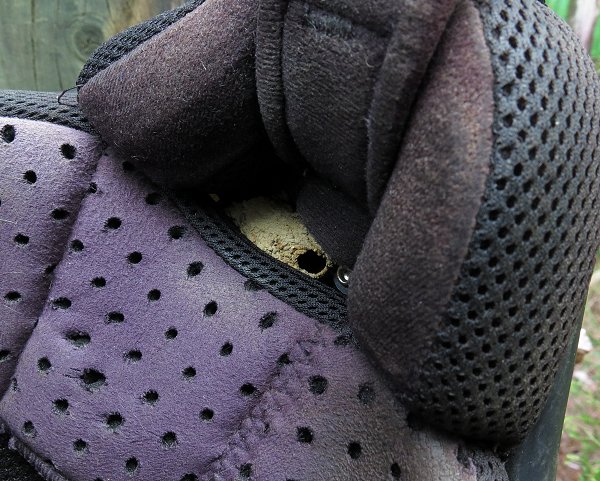 My motorcycle helmet, having sat around for a few days, has been colonised by Mason wasps constructing their nests in the cavities which sit over my ears.  I broke the mud out along with all the paralysed spiders and wasp eggs and have checked before wearing it since then.

I'm glad I noticed the nests before going out on the bike!

Sunday the 1st of February 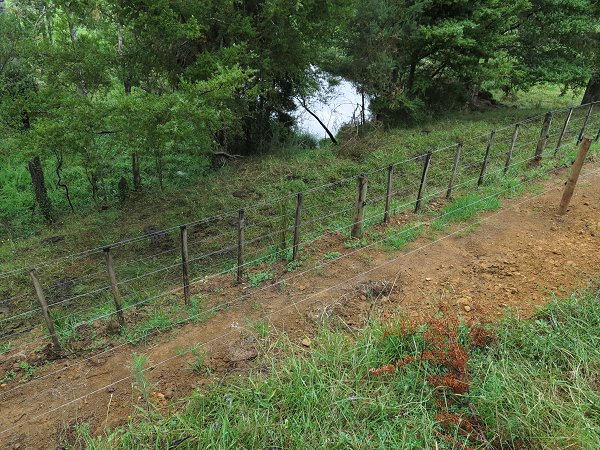 We had the annual electricity line maintenance day today, so no power from eight in the morning until five in the evening.  It's a pain, but this time we were well organised with a big chilli-bin and a lot of ice-packs to put around the ten-litre pot of warm milk to cool it down.

We invited some friends for coffee because this year we have gas (and they don't) and enjoyed a very pleasant morning together.

Here is the new double boundary fence Over the Road.  The cattle on the block next door obviously spend quite a bit of time under the trees along the fenceline, from the appearance of the trampled grass there.

In the evening Stephan went to get the calves in (the three of them come out of the paddock without the two cows quite well now) and Imagen's son was off away in a corner by himself.  He was slow and walking stiffly and the problem was obvious when I looked: he had an infection where the castration ring (and shrivelled scrotum) has recently fallen off and the area was very swollen.  The only medication I had to hand was Penicillin, so he got that.  We pushed him into the calf pen in the milking shed with the orphan and I jabbed him while Stephan applied enough pressure to the two of them to keep him still.

Penicillin, the wonder drug!  Young calf already looks hugely improved.  We'll continue the course of nightly injections for seven days to ensure we get all the bugs.  He won't like it and neither will we, but we've started, so we'll finish. 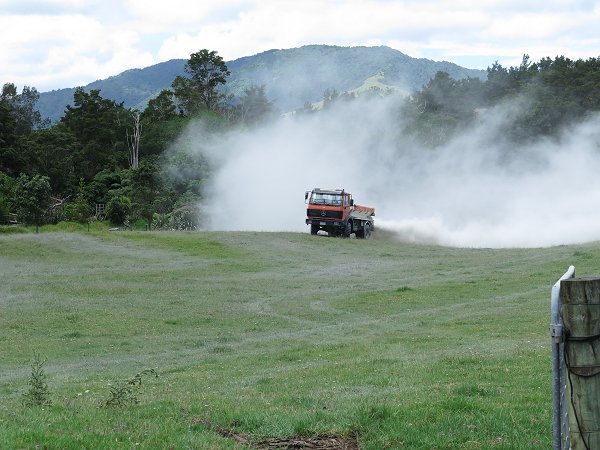 I rang Ryan early and he said he could bring some lime a bit later in the morning.  In the mean time we went off to town for my stitches and wounds to be checked and as we drove home around the corner to our own gateway, Ryan was coming out, having already spread the first load.

He came back with three more, spreading in Flats 1 & 2, before we decided it was too windy in the direction of the neighbours to do Flats 3 & 4 and he did the House and the Pig instead and then the fourth load went into Mushroom 1.  (These notes for me, more than you, dear readers.) 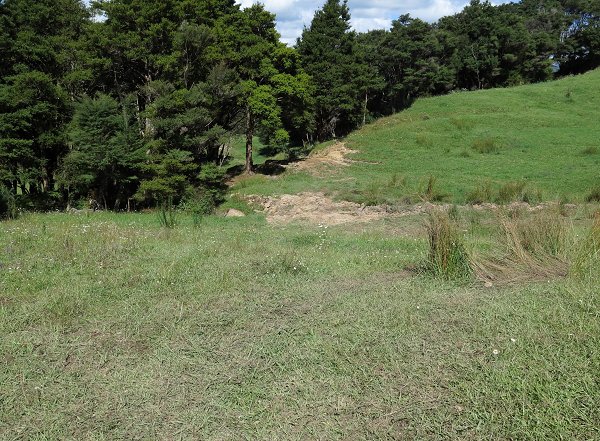 Stephan has been moving earth and putting culverts in before starting on the fencing.  I rode the bike further out into the (now) Spring Paddock than I had ever done before and looked back: the higher bare clay is where the track has been smoothed through that cutting and the lower area formerly ended in a small, very deep, narrow channel where water flowed from a spring and wet area to the right down through the trees to the stream to the left.  I always worried that an animal would mis-step and go down in a damaging way.  Now there is a culvert and soon there will be a fence around the waterway to the stream. 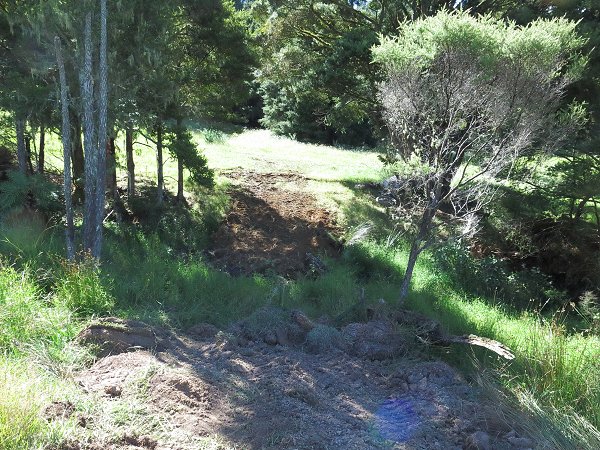 Stephan was calling this the "horrible wet bit" (I think it was slightly less polite than that) until I suggested we call it the "beautiful spring gully" instead.

He did some drain digging here last spring and has now put a culvert in to enable a dry track to be formed over the top.  It'll be primarily for cattle access (otherwise they have to go up the hill and around the top track), rather than for machinery, although when it is properly formed, it may be suitable for occasional use in that way.

When the primary task of fencing the streamsides is complete, Stephan will go back to do all these "legs" up around the gullies down which water flows. 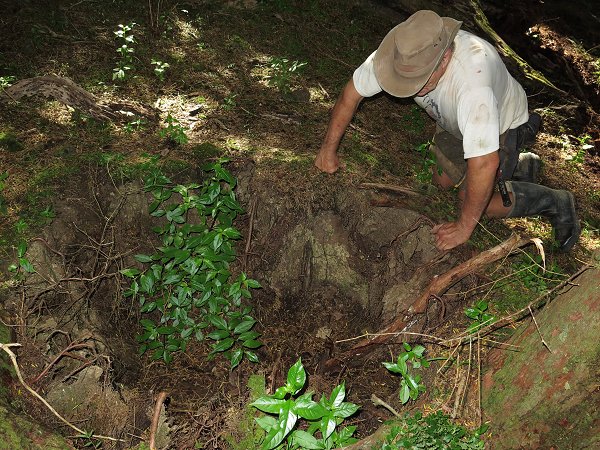 Over by the stream near the top corner there's this marvellous hole which appears to be the base of a long-gone huge Cabbage Tree. 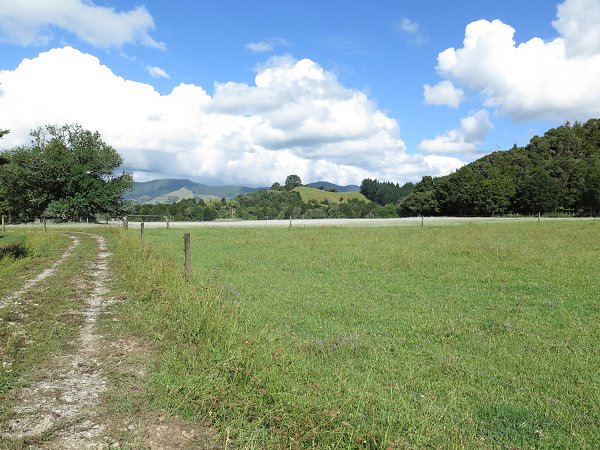 The Mushroom 1 paddock is starkly white, with lime dust stuck to the grass.  It'll take a bit of heavy rain to wash it off.

The weather is predictably warm and very humid.  The cows Over the Road were all moaning this afternoon and seeing no obvious reason, I concluded they were hot and bothered in the almost-still air. 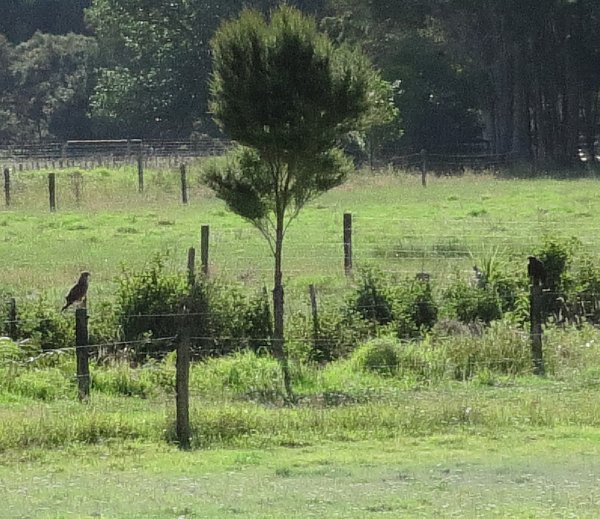 I took this picture from the house across the paddock to the fenceline to see if it would clarify what was going on: there was a lot of noise as a couple of hawks fell about the place from high in the air and then came down to perch on neighbouring fence posts.

It was a youngster with its parent.  Young hawks are quite vocal when they're flying near their parents.  Adults generally patrol the skies alone and in silence. 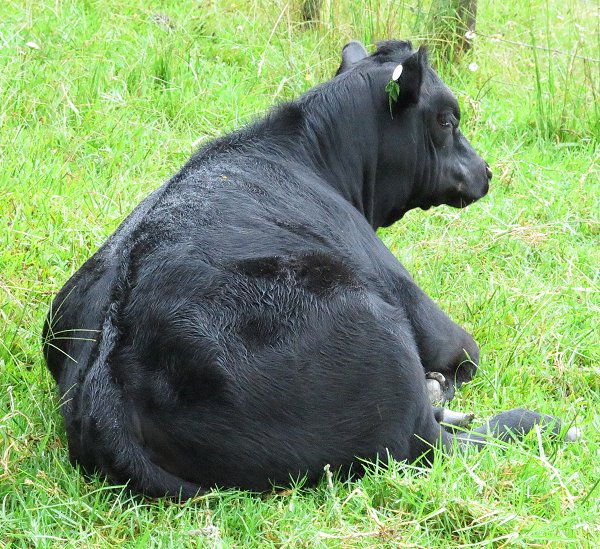 I walked up to the top of the Big Back North paddock to find bull 133 and his little mob sitting on the ridge looking across the Middle Back.  In the clouds there was some tremendous rumbling as a thunderstorm passed by, fortunately not causing a great deal of rain, although I did have to stand under a tree for several minutes on my way back down the paddock while a short, heavy shower fell.

I think this was Emergency's daughter, 142, with a pretty little green decoration in her ear. 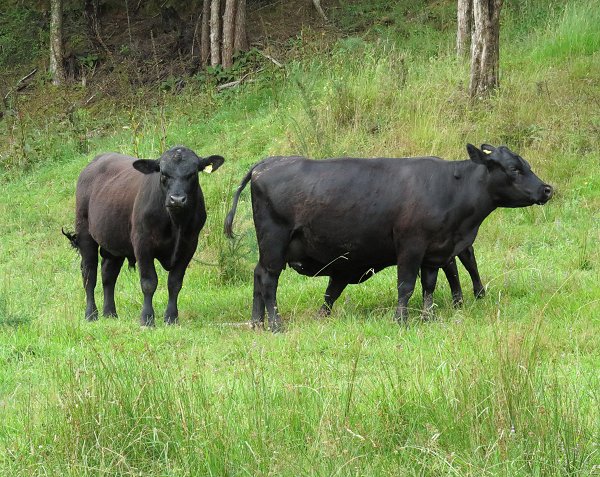 We had a very pleasing 27.5mm of rain overnight.  Excellent.

I had to go to town to have my wounds inspected again.  Adhesives make my skin terribly irritated, so the itch caused by the coverings has become the most annoying thing in the last few days, once the pain of the actual wounds subsided a bit.

Back at home in the early evening I did my cattle rounds, finding bull 133 active with young 729.  She has until now shown no sign of returning to fertility and I wondered if either I'd missed any sign and she was already pregnant, or nothing had yet happened.  It seems the latter was the case.  I hope this mating works, because I can't really let her have another cycle without extending the calving period more than I wish. 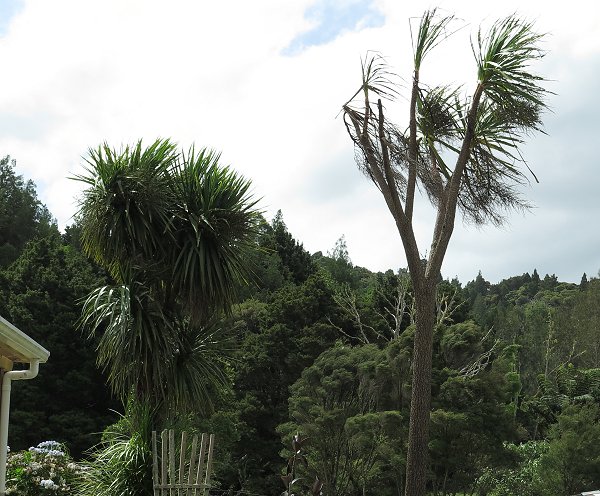 This sad process has been going on for several weeks now.  It would appear my lovely Cabbage Tree has succumbed to Sudden Decline, cause still unproven, which kills individuals amongst their healthy kin.  Back in November I noticed some of this tree beginning to turn yellow and hoped it was not this disease. 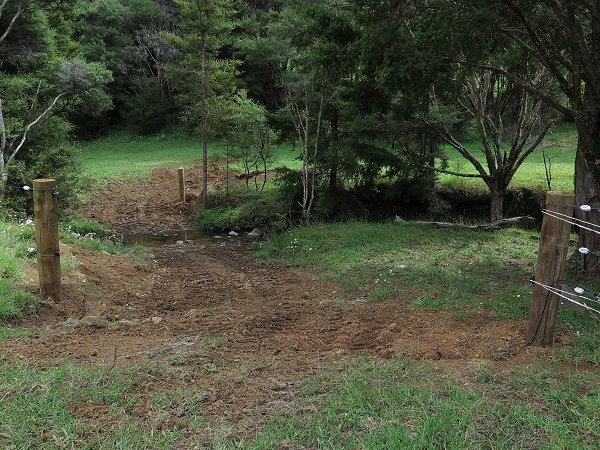 The strainers beside the stream crossings are taking Stephan some serious work because of all the rocks.  But with a combination of hand-digging, post-hole-borer operation and post thumping, they're going in and the project is progressing well.

Stephan had a day off today, going trapping.

Both of us have been supremely aware of the approach of the anniversary of last Waitangi Day and its particular significance in our past year.  Anniversaries are funny things and both of us have felt oddly more relaxed as more time has passed since. 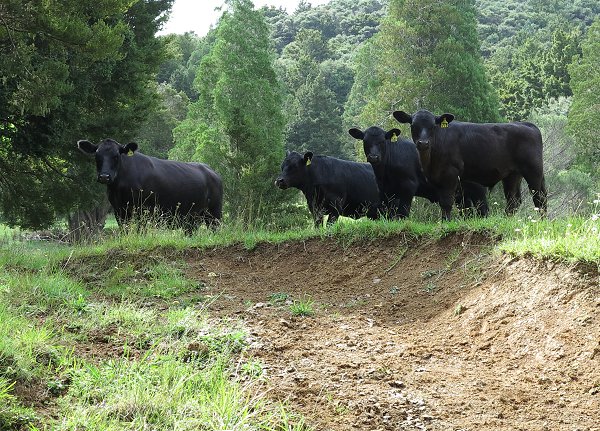 Meg 699 and the mob's three calves stood watching me as I waded the stream to check on them this afternoon.  This group comprises only the twins and Demelza with their calves and bull 133. 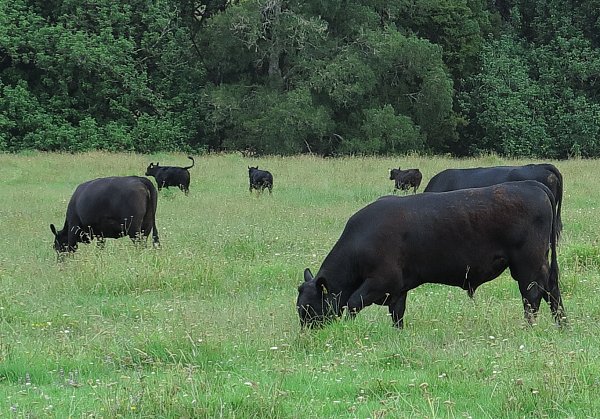 I shifted the seven animals along to Flat 4.  Calves often take off at a sprint and check out the whole of their new territory when introduced to a new paddock.