Stephan and I drove over to Taipa early this morning, where he left me and went on with Terry for a day's trapping.  I drove around the corner to attend a Community Safety Day coordinated by Rural Women NZ, but sadly extremely poorly advertised and with no effective signage on the roadside.  I appeared to be the only adult member of the public in attendance for most of the morning.

There being nobody else waiting, I went to the St John Ambulance caravan and brushed up my CPR skills, since it's many years since I learnt how to do it and the instructions have changed over time.  While there, I asked if someone could please reapply some steri-strips to my back wound, since I couldn't reach it and hadn't wanted Stephan to do it, with his attendant population of Staph. aureus.  With nobody else there, I was willingly attended to.

Then on to watch a demonstration by the Mangonui Volunteer Fire Brigade in their mobile kitchen: what not to do if you accidentally set fire to cooking oil.  This series below shows what happens if you poor water into a pan of burning oil (a safely dressed fire fighter was just out of the picture, holding the can of water on a long pole). 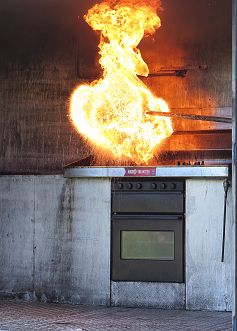 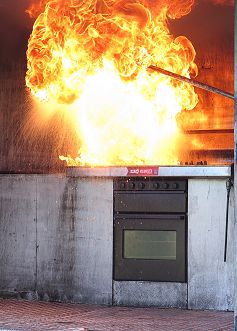 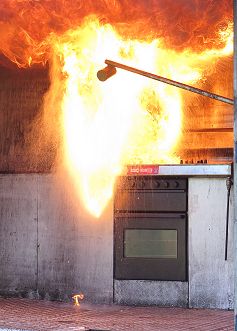 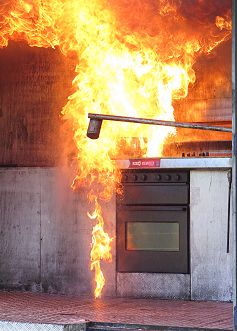 The safer options are to turn off the heat source, carefully place a lid over the top of the pan, or a wooden chopping board (never plastic) or if neither of those is available, a damp (not dripping) teatowel, although that didn't appear to work nearly as well as the solid covers.  Then you go away and call the fire brigade, leaving the hot pan where it is, because it will take over an hour to cool sufficiently to be safely handled again.

It was an impressive demonstration.  Then the hot, sweaty young fire fighter took all his heavy gear off again... 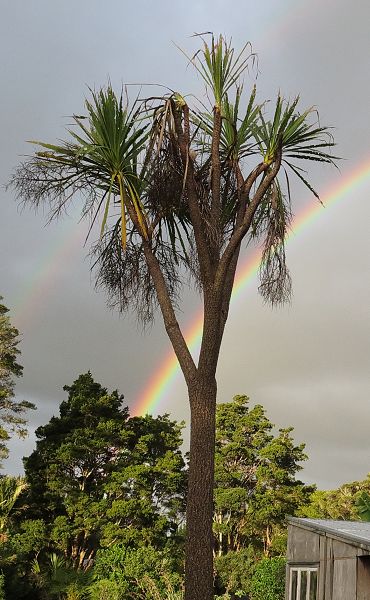 The poor, dead Cabbage Tree by the deck continues its decline.  There is no hope.  Its bark is flaking off all around the lower part of the trunk.

We have interesting neighbours.  For various reasons, all of which have to do with my expectation that we will all behave considerately toward each other, I've been in receipt of a number of abusive tirades over the phone over several years, the latest only a few weeks ago.  Today the same neighbours asked for help, because their ewe and lamb were now in our Orchard paddock across the stream.  They and their sheep ended up running all over the flats, as did Stephan and I, helping them herd the wild, unpredictable animals toward our cattle yards so they could be restrained and loaded onto a ute to be returned home.  Of course we helped, quietly, civilly, as we always do.

The cows and calves, quiet again after this morning's upset - they get funny about odd animals in their midst, let alone strange people and stampede about the place in over-alert excitement.

The little wispy clouds in the hills are there because we'd just had 25mm of rain late this afternoon.

After removing the bulls, my daily checks are now to determine whether any of the cows and heifers are still cycling, i.e. not pregnant as I hope they all are.  A big mob of cattle (big for this place, at least) eats a lot of grass quite quickly, which is excellent for pasture control and good for the animals as well.  They get fresh feed regularly and don't have to wait for long when a paddock's grass is low.

Orphan calf 765 had been having 4.5 litres twice a day since I upped his feeds to help him keep up with the weight-gain of his contemporaries.  Now he's started leaving part of each feed and I've had to drop him down to four litres in the morning and three at night.  He's now 3.8 months old. 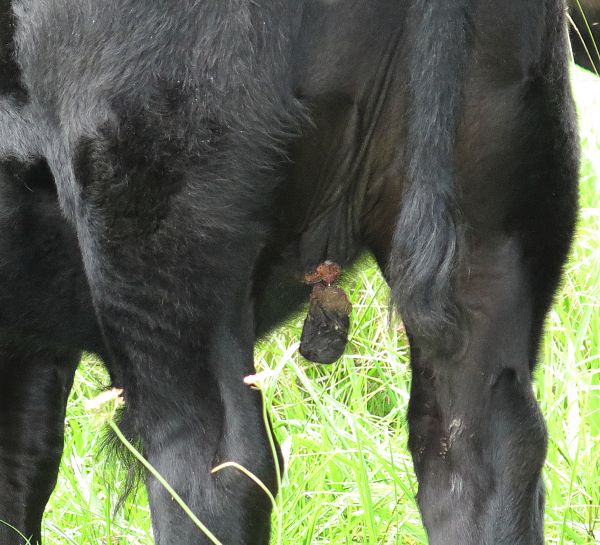 758, son of lovely 475, is one of the largest calves and his scrotum has taken a long time to fall off.  The area above was quite swollen and he looked a little off-colour for a couple of days two weeks ago, but continued feeding and behaving otherwise normally, so I watched and waited.  Today I saw that his scrotum was hanging by a thread of tissue.  I've seen this happen before and it causes pain and potentially also infection, so I took him and as many others from the mob as necessary to get him there, to the yards.

I took this photo as he went to the trough on the other side of the bridge for a drink and by the time he'd reached the yards, the scrotum had gone!  I looked for it, but couldn't see it in the grass.  But problem solved.

For good measure I put him up the race and gave the area a good spray with Iodine.

I kept watching him over the next several days and the wound site gradually dried and eventually healed over without further problems.

Today was the day for Jill's move into the rest home.  Since we took away most of her furniture last week, she has been staying at Jude's place.

Stephan and I got up, milked, processed milk, sent the cows out to their paddock and were driving out the front gate at just after 6.30am.  The trip south took far longer than we'd anticipated, firstly because of fog all the way through from Mangamuka to Ohaeawai and then we started hitting heavier traffic, so that we entered Whangarei at the peak of its rush-hour and it took more than half an hour to get to the other side of the city, something which would normally take about ten minutes.  The other slowing factor was that we were towing a trailer so we were sticking to the 90km/hr speed limit.

While I packed boxes and carried things down from Jill's apartment in the lift, sometimes with Jude, sometimes alone as she'd gone off to arrange the new room, Stephan packed the ute and trailer.  These things are always bigger jobs than one anticipates!

We left Auckland a bit before half past four.  I'd arranged that we call in on one of Jill's former parishioners and our friend, Sheila, in Whangarei and she'd prepared a delicious meal for us to share.  It was so lovely to spend some time with her that we relaxed and didn't worry too much about how long we were there - we'd already calculated that we'd never make it home before dark anyway.  We arrived home just after 11.30 and while Stephan got the calves in and unloaded the trailer and ute and filled our living room with yet more furniture and boxes, I went out to check my cows, since I'd not seen them all day.

I almost didn't go because I was so tired, but had arranged with our friend Brian to catch a ride with him to a field day today near Kaikohe, just over an hour south.  I hitched a ride with Jane to the main road and there waited for Brian to come past.

We went to Te Iringa Marae and gathered outside until we were called in to the Wharenui (meeting house).  Farm field days are not usually held on Marae and I suspect there were some discomforted farmers there.  Many pākehā, even in this area, have never set foot on a Marae!  The farmers who had organised the day had some arrangement with their neighbours at the Marae to hold the meeting there, since there is no other community hall.

There were some interesting speakers including one of the local vets speaking about the new variety of Theileria, a tick-borne disease which causes sudden anaemia in cattle and has become a real problem in Northland and is gradually spreading south with all the dairy cow movements and warmer temperatures.  We have not yet seen it here on our farm, but presumably it will get here eventually, despite our care about animals from elsewhere coming in - that sheep and lamb the other day could easily have dropped ticks which are infected by the cattle on the same property, for instance.

Another speaker was a specialist in soil science and spoke about fertility for pasture and animal health in a way I hadn't heard before and found very interesting.  That has spurred me to get on with an analysis of Flat 4 and its very uneven pasture growth pattern.

During lunch in the whare kai I noticed one of the walls was covered in lines representing bricks to be purchased by donors to a building upgrade for the Marae, improving the ablutions block and creating covered walkways between the main buildings and shelter for waiting visitors.  $20 a brick?  Great value, I reckon.

Brian and I left part-way through the afternoon so he could visit his brother near Kerikeri, dropping me off in the town to wander about for a while.  It felt like a holiday, for all that I was only there for a couple of hours.  I shouted myself a nice coffee, having not had my usual two cups a day (prescribed some time ago by Renée, who told me about a coffee study and its findings suggesting good effects on those likely to develop Alzheimer's, when I was having a nervous time considering my mother's decline).  I bought a book on Kerikeri history, to follow up on some of the things I learnt at the Women's Studies Summer School, and found an on-special three terabyte storage drive for my increasing data mountain of stored photographs.  I thoroughly enjoyed myself and then met Brian again for a pleasant trip home. 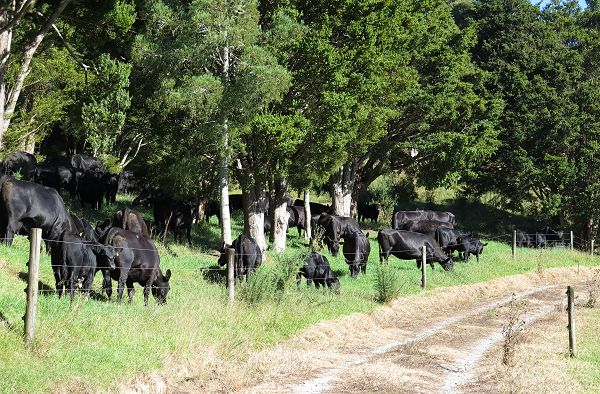 Before moving the cows and calves from the Windmill Paddock out to the PW, I drafted grey 607 and a couple of companions into the lane and walked them to the yards, where we put 607 up the race so I could have a good look at and feel of what remains of her belly wound and swelling.  I could feel no evidence of any foreign body under the skin and everything looks alright, the swelling nearly gone.  A likely scenario is that she crossed the stream somewhere in the Frog Paddock and a stick or root remnant embedded in the bank pierced her belly as she passed, scraping along beneath her skin, which would cause enough trauma to result in the reaction I've been watching.

In a large herd, such a thing might not even have been noticed because she did not become sick. 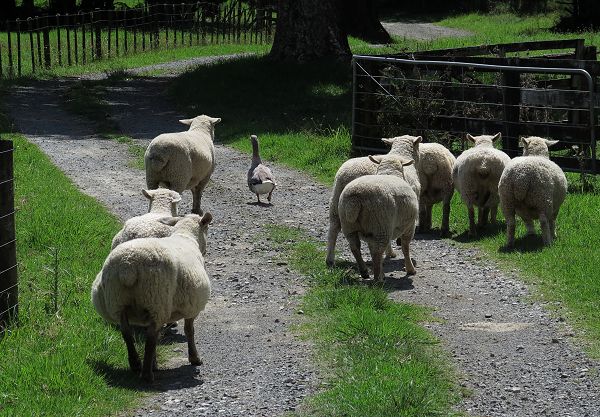 Stephan left the gates open again when he brought the tractor out of the shed and when I came back from moving the cattle the sheep were all out at the front round-about, happily grazing.  "Sheep" of course includes the feathery one.

Stephan completed the Spring Paddock fencing this afternoon and is very pleased that large part of the project is finished successfully.  There is a little more work required on two still-wet culverts, but the fencing is currently of higher priority, with an end of March Environment Fund deadline to be achieved.