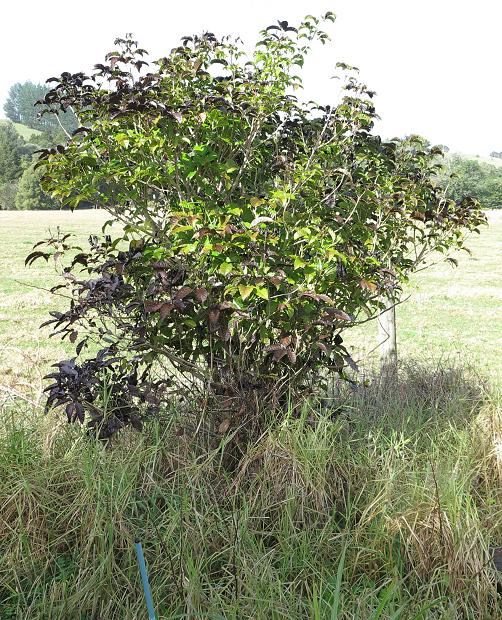 A lot of Puriri trees have suffered frost damage, but only the smallest and most exposed will not survive.

The affected leaves turn black within 24 hours of being frozen.  Puriri consequently only grow in the Northern half of Te Ika a Maui (the North Island).

This is Cattin's tree in the cat cemetery at the top of Flat 1. 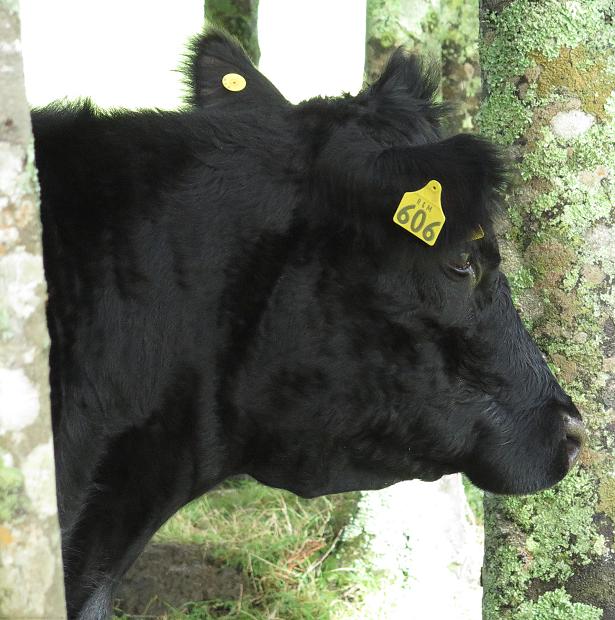 I'm a little concerned about what looks like some swelling under 606's jaw.  She has seemed a little off-colour occasionally, but there's nothing in particular obviously wrong.  She keeps eating and is in very good condition.  Perhaps it's just fat? 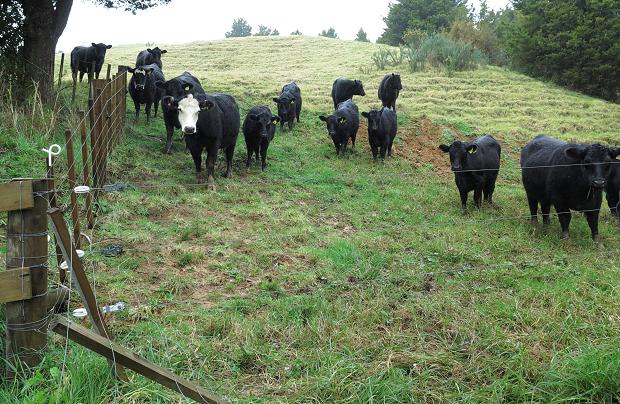 We decided the easiest way to deal with the heifers in the Road Flat/Orchard paddock was to put them directly across the road.  They were unlikely to want to go back down into the stream and it would have been tricky to make them do so, with so much tree cover and shade on the other side.

This is the bottom corner of the hill paddock Over the Road, which no longer has a gate at this end.  We set it up so we could install a gate later if we want to and if we do this more than once, I suspect a gate will be on the list.  It only took Stephan about five minutes to undo the two bits of fence, but it was a fiddly job.

The heifers looked rather like they thought they'd been cheated: there isn't a huge amount of grass on the hillside, but it has been growing for a couple of weeks, so they'll have a few days' grazing here. 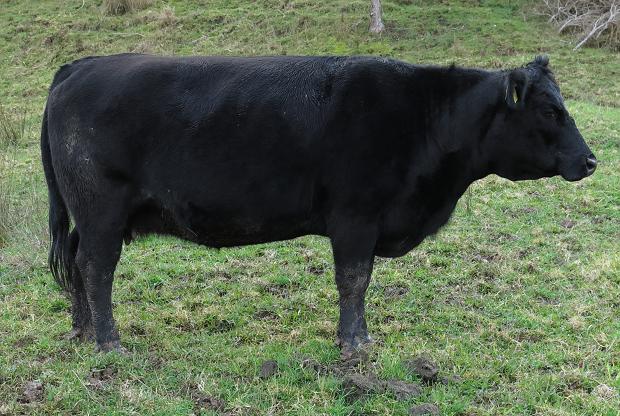 This is 606 with the suspicious jaw/neck swelling.  She's the fattest mature cow, so whatever is going on, she certainly has the bodily resources to deal with it. 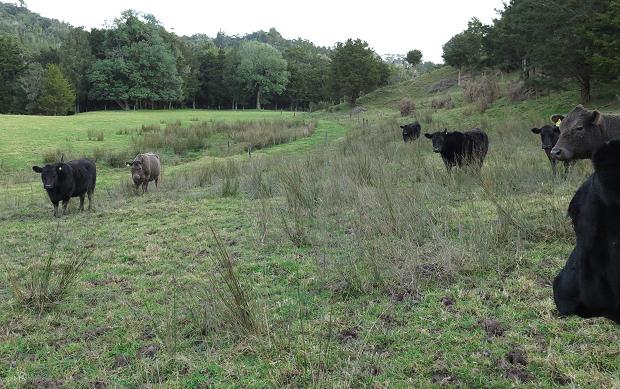 Winter: damp, dull, beige.  We're lucky there's actually still a lot of green, but there's a lot more beige at this time of year than any other (except perhaps a very dry summer, but then at least it's warm).  I'm always grateful I live in a country whose trees are primarily non-deciduous.

Outside was horrible and cold, so I didn't go there.

Last evening we discovered we had very little hot water for our showers.  For the last few weeks I've noticed the hot water was a bit hotter than expected and I wondered if the thermostat was playing up.  This morning, instead of sensibly testing the thermostat first, we emptied the tank and took out the electric element and the thermostat.  With multi-meter in hand, I checked both and discovered the problem was only in the thermostat.  But emptying the tank wasn't entirely useless because we've not done that for years and it allowed us to swill out a lot of sludge from the bottom.  Before we had the big tank on the hill, quite a lot more silt would have ended up in the cylinder than is now the case.  (Emptying the cylinder, if you've never done it, is simply a matter of undoing a screwed-in bung at the end of a bit of copper pipe which sticks out the back of the house, coming from the bottom of the tank.)

We put it all back together, minus the thermostat, and now we'll turn the power on manually for a couple of hours each day, after the solar heating has done as much as it can when the sun shines.

(On our next trip to town a few days later we forgot to buy a new thermostat because neither of us could decipher whatever Stephan had written on the list!  No big deal: next time.) 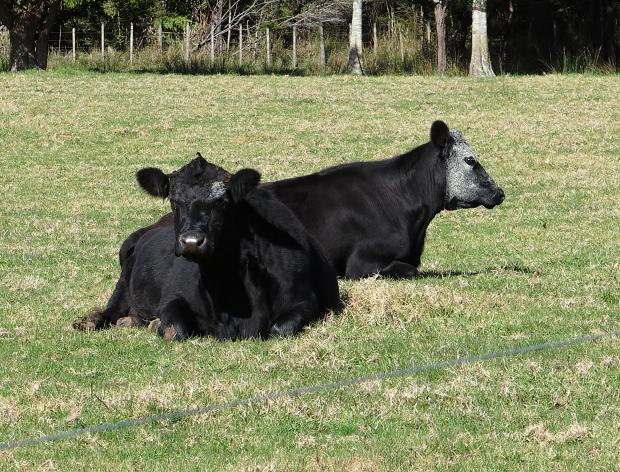 Imagen and Zella, in Mushroom 1, must have spent some time rubbing in the lime-rock pile on their way here.  Zella is today's white-face. 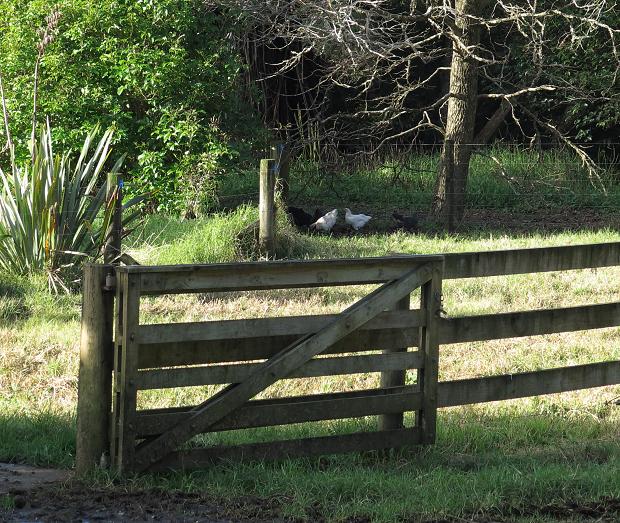 I couldn't see the chicks around the house.  They'd gone away down into the little milking-shed holding area.  They may as well enjoy some freedom now, since they'll become caged hens when they go to their permanent home - caged on grass and moved every day, but certainly without this level of freedom. 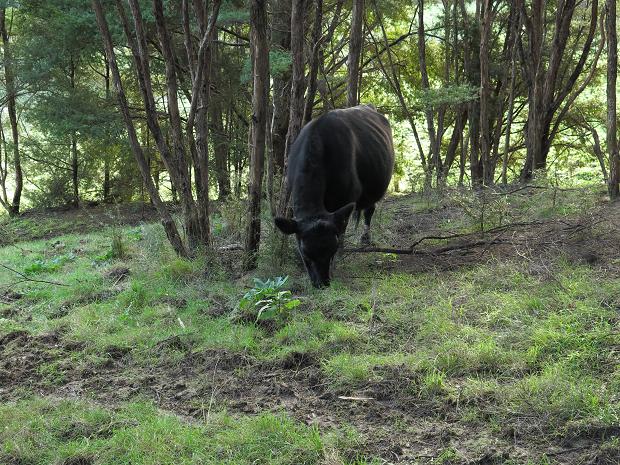 While 725's ribs are visible, these second-calving (Rising three) heifers are doing ok still.  They all have a reasonable level of cover and are very slowly gaining condition, which is a hard thing to get them to do through the winter.  I'm happy if they don't lose too much over this period.

We have lots of areas like this, where a bit of low-quality (feed-wise) grass grows under Kanuka trees.  The cattle seem to like mooching around here though, finding a variety of plant-types to eat.

On a fine, lovely day I had a horrible headache.  I did non-exerting things like lots of washing.  I find the new weather station monitor quite useful for watching the outside humidity: a cloudy, cool day with 40% humidity is still better for drying washing than a fine one with 70%.  I really like clever gadgets. 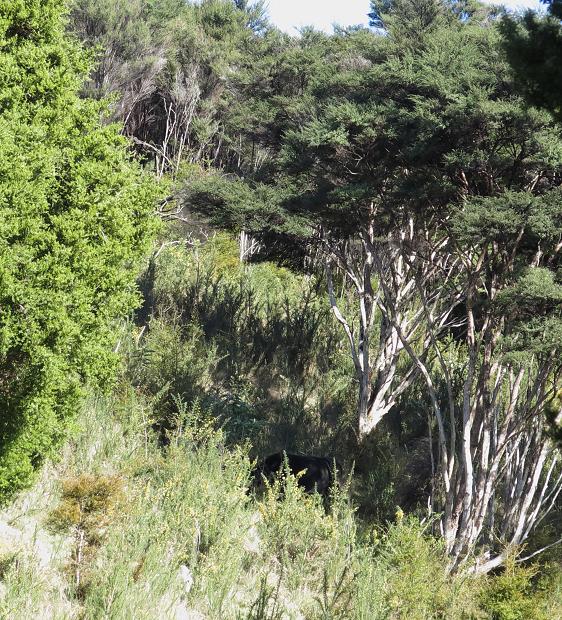 Thirteen of the 15 R3/4 heifers were waiting at the bottom of the Pines paddock for me to move them.  I walked along the lane and looked up the slope and fortunately spotted a black body, then her companion, almost invisible in the scrub and gorse: they were having a mutual licking session and were entirely uninterested in coming down the hill.  I had to walk up and get them.  (Dexie 121 is visible bottom centre and Ellie 119 is just up to our left.) 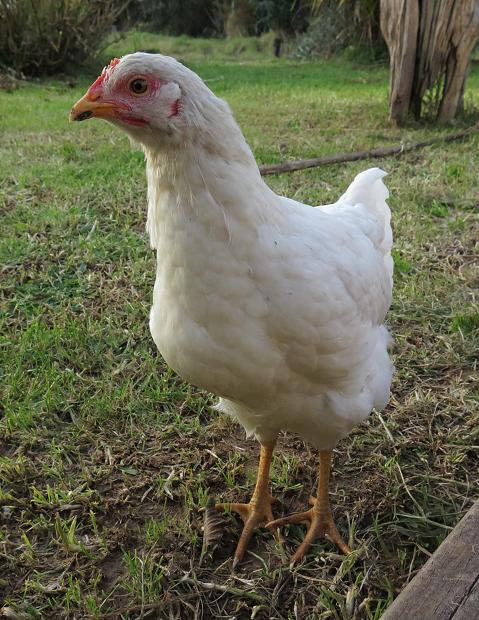 Pretty little hen.  The two white pullets have a slightly dirty appearance around their heads caused, I think, by a red tinge in their feathers, inherited from their Brown Shaver mothers. 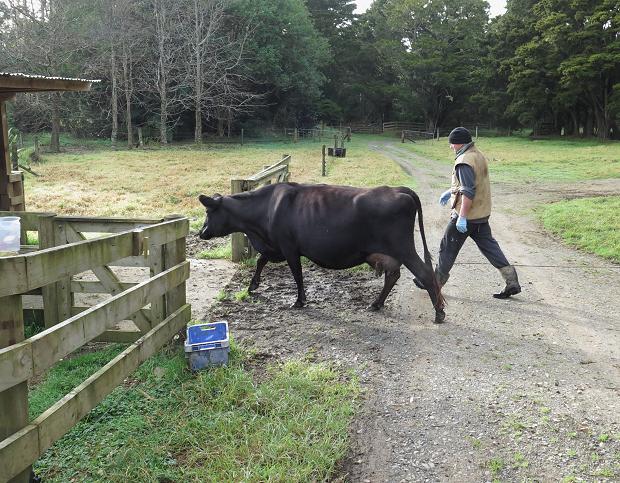 According to my calculations Zella is due to calve in twelve weeks from today, so it's time to dry her off.

We think her mastitis infections have cleared (hard to tell for sure without culturing a milk sample) but will use a "dry cow" product to work in her udder while she's not milking - it's an antibiotic cream which goes up each teat and protects from infection as her teats seal up and works on any residual infection she may still have in the mammary tissue.  Dry cow is used primarily in dairy herds, but we've accepted its use for Zella as we've tried to fix her ongoing issue.  I'd prefer not to have antibiotic residue in the milk, but her health needs trump our preference and we don't drink the milk for an extra milking or two outside any drugs' withholding periods. 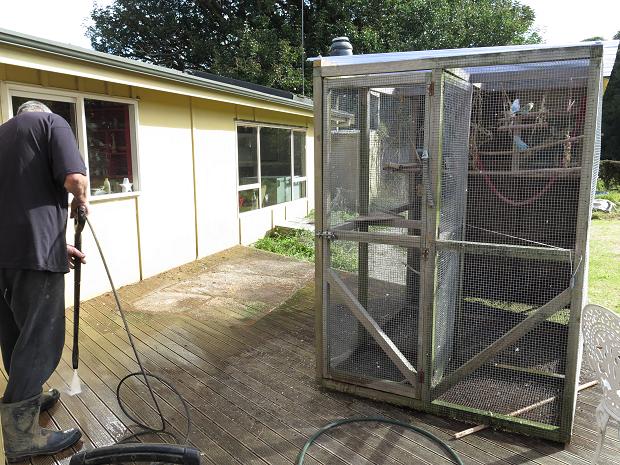 Last week I suggested to Stephan that if he bought some dowelling, we could use it as rollers to move the budgie cage.  Proper dowelling being expensive, he found some cheap broom handles and bought half a dozen of them.

Stephan lifted the cage while I rolled a couple under the front edge and then as he pushed it forward from the other side, I placed more rollers and it worked very well with little effort and no damage to the wooden deck.

Stephan water-blasted the accumulated mess off the deck and then I took the blaster hose inside the cage (the birds now being accustomed to the noise) and cleaned the mesh on the floor.

When we rolled it back after the deck was dry, we put some heavy plastic down underneath.  The deck timber seems not to have suffered any damage other than a bit of discolouration, but best not to leave a lot of bird droppings and seed residue sitting on it for long periods.

Once they were back in place I returned their feed dishes to the cage and they all ravenously descended upon them!  Birds get hungry quite quickly when their food isn't available.  They'd only been without it for about four hours, which demonstrates how careful I need to be about ensuring the continuous provision of food. 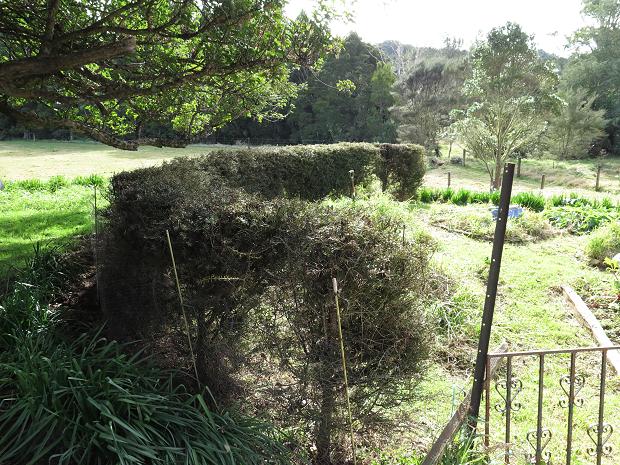 The Totara hedge looks tidy again.  Having seen them in pictures, it's fun to experiment with our own. 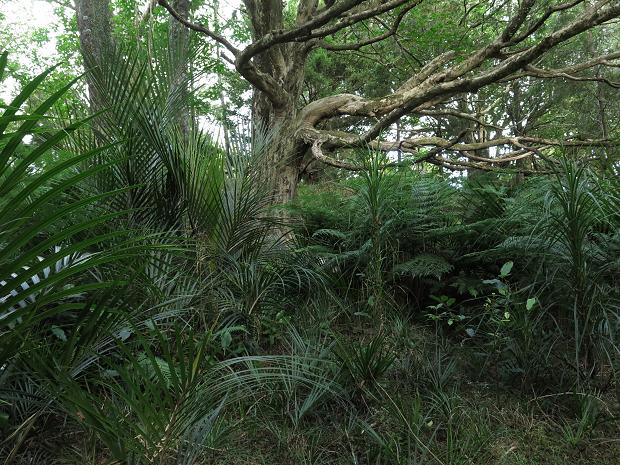 After climbing the hill Over the Road to check the heifers, we wandered back through the reserve.  It is really thickening up a lot now.  There are so many different seedlings here; the ones I noticed most were numerous Pigeonwood (Hedycarya arborea) plants.

We are always on the lookout for the Monkey Apple (Acmena smithii aka Syzygium smithii) seedlings which continually germinate from berries brought here by the Kukupa from people's garden trees.  They get unceremoniously pulled from the ground. 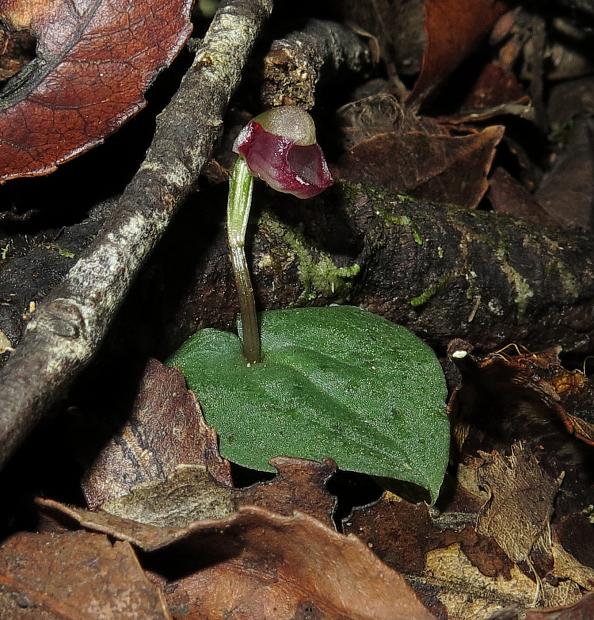 Down the gully toward the road we climbed through the electric fence and crossed the road to go along the area we mischievously call the Penisula, the narrow peninsula bounded by a long bend in the stream between our house and where the sheep usually graze.  At its highest point near the road, the huge Pine tree stood until we had it felled and I later discovered a few of these orchids, in the following winter.

This particular plant always grows here, but I could not see as many others as I sometimes do - although you can probably see why: they're really very tiny amongst the leaf litter. 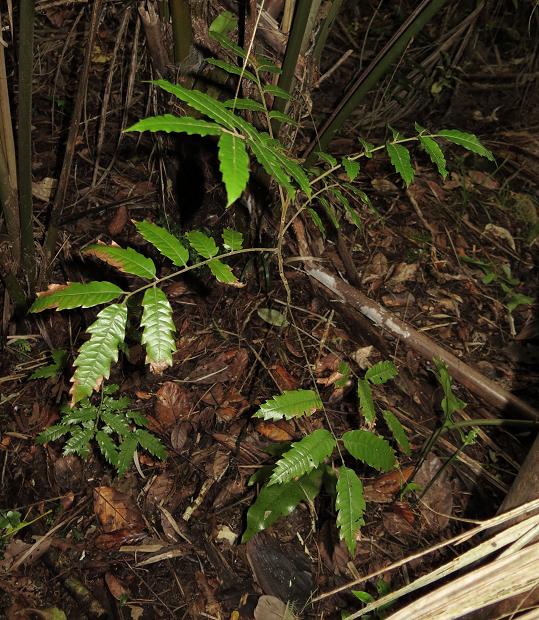 The land then drops steeply down toward the stream and I looked for the huge Titoki (Alectryon excelsus) I know is there.  It's a huge old tree.

We found a number of Titoki seedlings.  I've never seen a Titoki fruit here - wouldn't see them on the huge tree because they're too far up but the other trees, whose foliage is within either reach or clear sight, have never produced seed that I've seen. 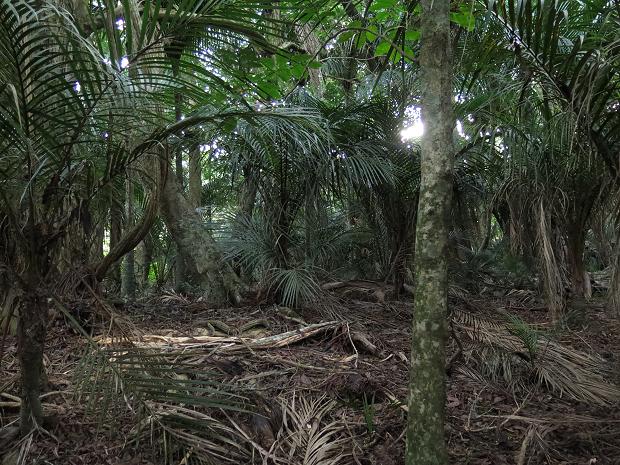 Flood waters flow across this area sometimes so the forest floor is quite muddy in appearance.

There are mature Puriri, Titoki, Rimu, Totara, Kohekohe and Northern Rata (and no doubt others I've missed or not noticed yet), along with tall Cabbage Trees and Nikau Palms all reaching up for the light.  I always enjoy walking through here. 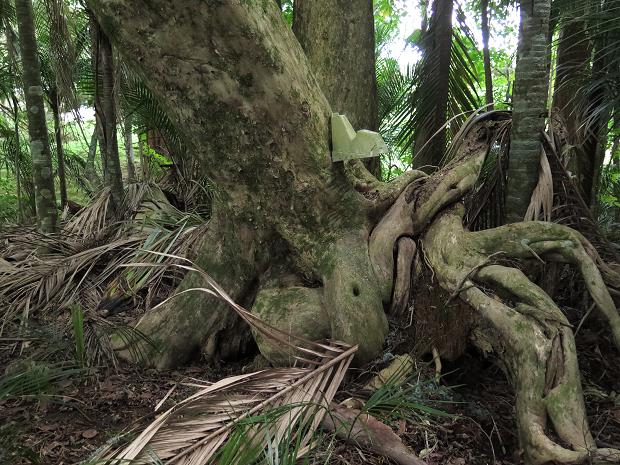 A couple of the big Puriri are leaning alarmingly.  It looks rather like the flood waters have gradually undermined their roots.  The leaning trees are held up by their neighbours still, but presumably will one day fall down.  They are enormously heavy trees.

Stephan has attached a bait station to this one, which hasn't been refilled since before he chopped his toe.

Clambering down into the stream was a slippery experience and the stream was slightly too deep for my boots.  Stephan got his wet and piggy-backed me across.  What a chivalrous chap. 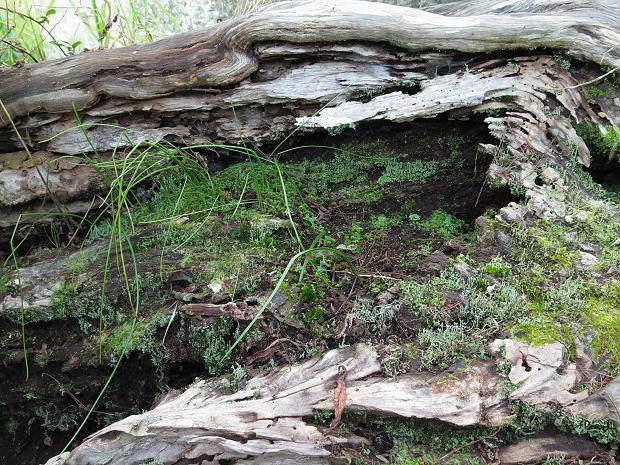 While we were wandering around I checked on the fancy orchids on the fallen Puriri in front of the house: there are hardly any growing this year! There are two of their strap-like leaves in the centre of the picture; the others are all Onion-leaf orchids.  I wonder what has happened to them?
I haven't looked after them very well this year, but there was only a little grass and blackberry encroaching on their area, which we cleared out of the way.  Perhaps they were too damp, or too shaded?