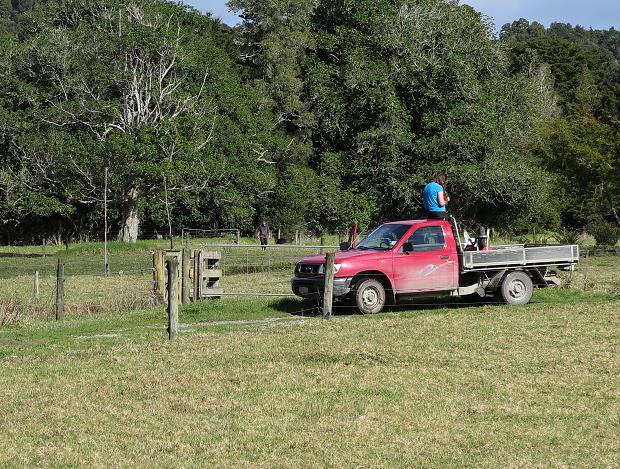 I have to rely on others to do my work, since I'm so ill I can't possibly do it myself.  Walking across the flats to re-open a gate the bulls had pushed shut, would presently be far too much exertion, so Stephan did it for me, while Ella watched from the back of the ute. 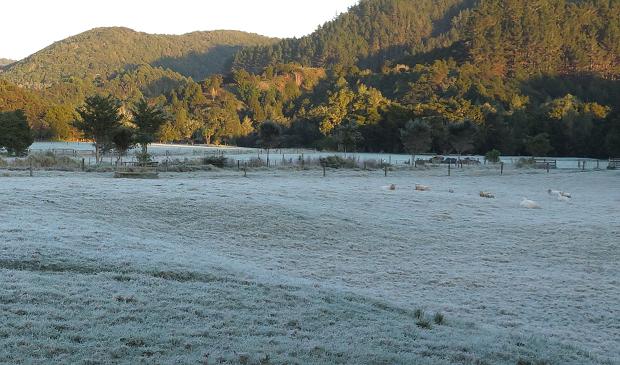 A nasty frost this morning.  This will knock the grass growth significantly. 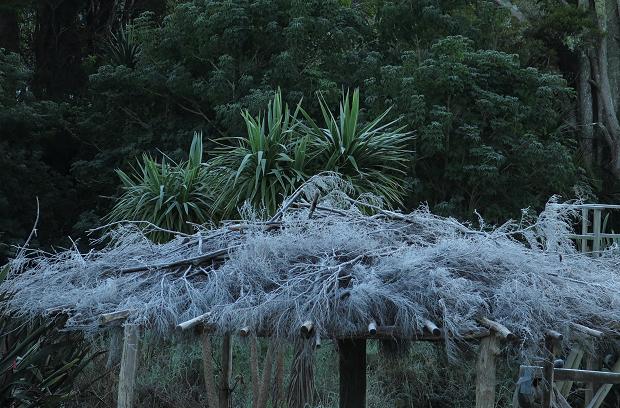 Our frosts don't usually get so high up off the ground: there's ice on the Cabbage Tree leaves and the top of the Gazebo! 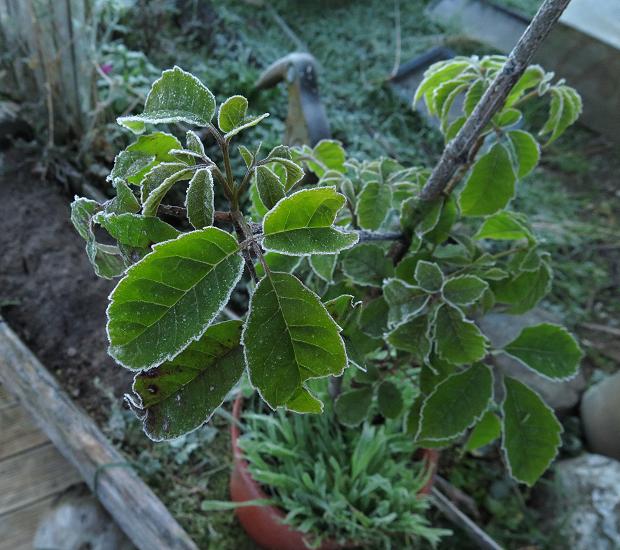 We didn't think to cover any of the Puriri and I could easily have moved this one, in its pot, to shelter under the eaves of the house. 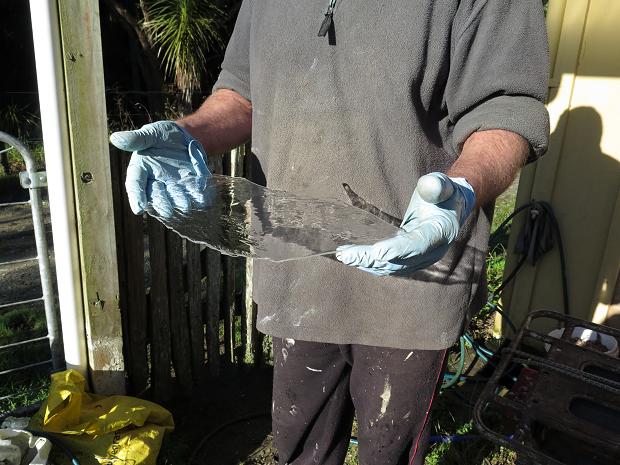 Stephan carried this bit of ice back as he followed Zella in for milking, from the top of her trough.  He said she looked quite confused as her muzzle hit a hard surface when she dipped her head into the trough for a drink.  Iced water is not something my animals have to deal with very often.

Working quietly this morning there was a bit of a crackle behind me, which I ignored (the IPStar modem often cracks as its plastic heats and cools) until I realised my internet connection wasn't working.  It turned out that the power supply to the modem had failed.  I rang Farmside, the satellite connection provider and was assured they'd get onto it quickly. 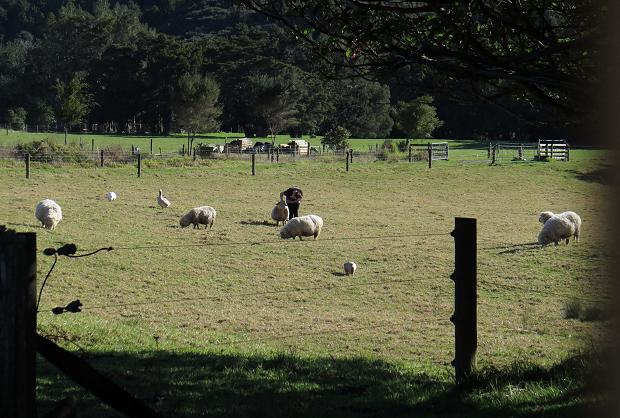 Ella disappeared for ages when she went out to right a sheep.  She was spending some quality time with lovely Dotty, who likes a scratch. 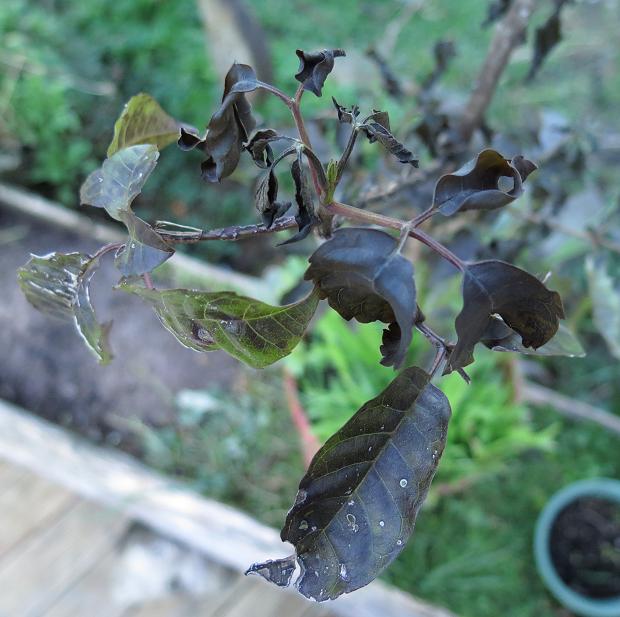 By the end of the morning the damage the frost had wrought on these Puriri leaves was apparent and by late afternoon they'd turned completely black.  Frosts can kill young Puriri, but hopefully the shoots on this one have not been too badly damaged and they will grow again and save the tree. 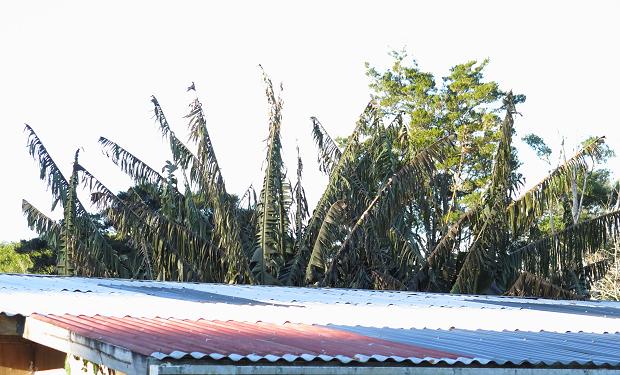 The Bananas were equally affected.  They're pretty tall, above the back of the shed, but were still iced. 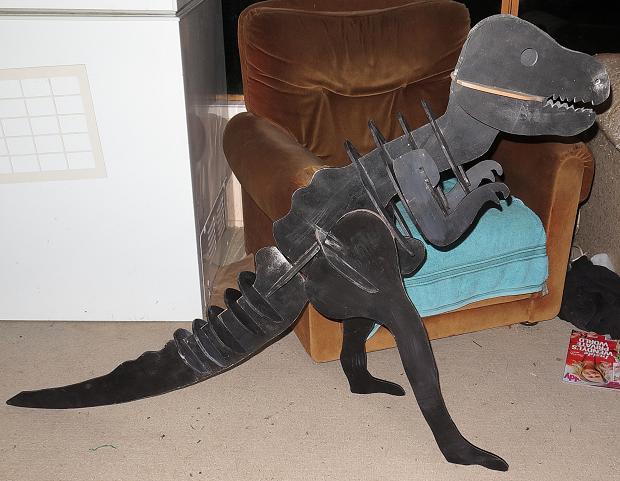 Ella and Stephan put the dinosaur together (apologies and thanks to whomever originally designed this creature, a copy of which Stephan made so he could recreate it for Ella).  The unpainted piece in its head is so because either they forgot to cut that one out, or it rolled away somewhere under something in the shed and there wasn't time to paint its replacement.  Ella will probably add other colours at home.

We packed it flat and tied it all up in a package with Ella's name on it, hoping it might travel with her on the little plane tomorrow. 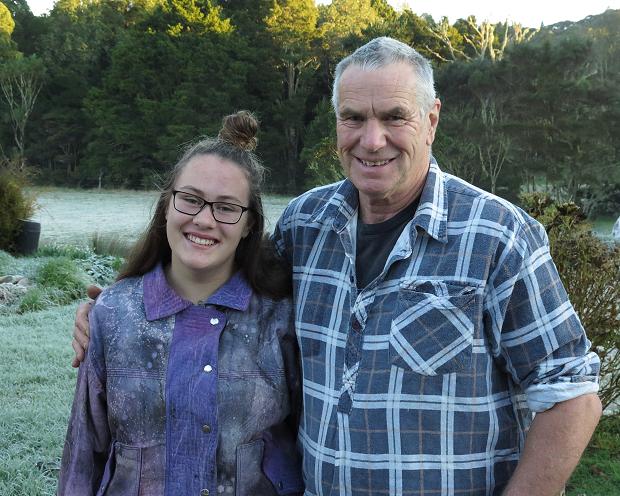 The Father-Daughter photo.  Ella is changing fast, now taller than I.

Stephan took Ella up to the airport to catch the Great Barrier Airlines flight to Auckland.  Even with the $180 fare, it makes more sense to send her by air than for Stephan to drive her to Whangarei, from where she may have been able to get a lift.  By the time one figures in travel expenses and time, flying makes sense in this case.  We would have sent her yesterday, but there were no seats available. 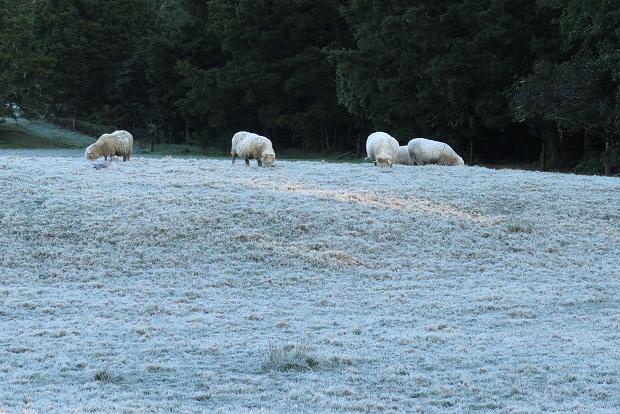 And another heavy frost.  I don't like frosts - they're pretty when they happen, but their effect on the grass is immediately damaging and long-lasting as it stops all growth if the soil gets too cold. 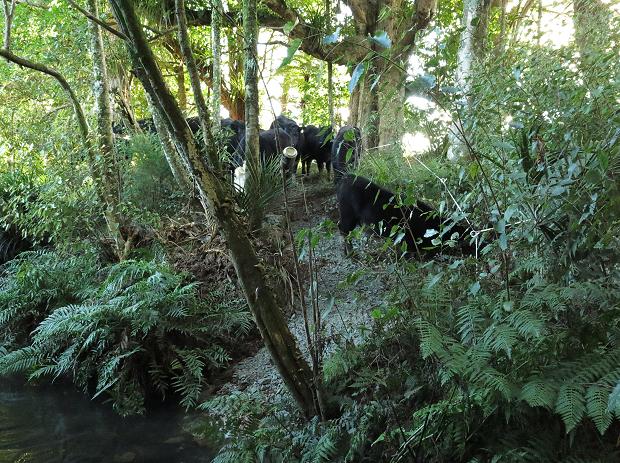 Stephan was out for much of the day and I phoned to hurry him home so we'd have time to get the heifers over the stream to the river flat after he'd done a little more work on the crossing.  The heavy frosts will cause the Kikuyu in the paddock to bleach and lose any remaining feed value, so it needs to be eaten now.

Again we had some difficulty in coaxing them down to the crossing, but the path is now more obvious and eventually one ventured down to the water's edge and another then ventured out into the stream.

(The drink can in the tree was fished from out of the water and perched there ready to go home to the recycling bin.  Why do people throw rubbish in streams?) 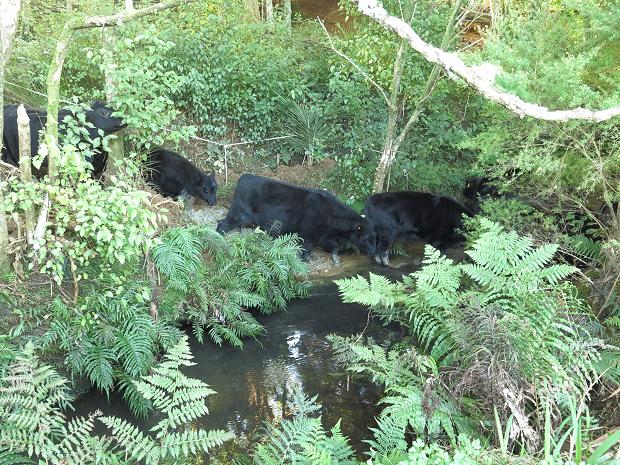 Considering all our riparian protection work on the rest of the farm, this felt a bit off; but needs must.  Grass is short, we can use this paddock and these heifers will be happy here for several days.  They don't need a lot of water at this time of year, but Stephan later went up the road and installed a trough for them, so they have no need to venture down into the stream again. 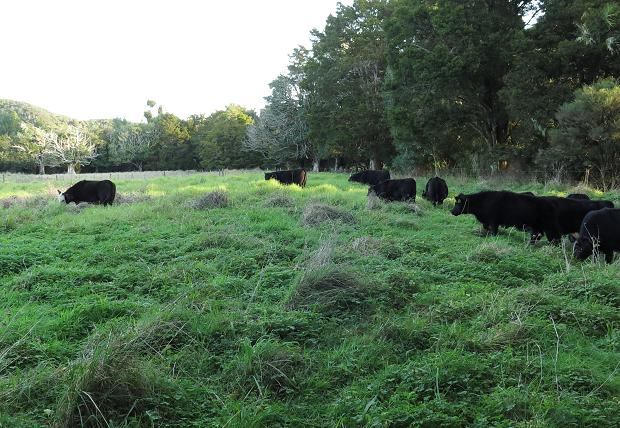 This certainly isn't high-quality pasture, with over-grown, over-mature Kikuyu and lots of buttercup, but it's bulk feed which will help them stay warm and comfortable.

We'll deal with getting them out of here again when the time comes.  I'm not sure they'll go back down into the stream from this side.

I've decided to phone Farmside (my satellite broadband supplier) every day until they fix my connection.  It's all very well the Prime Minister wittering on about regional development and the Rural Broadband Initiative: we're not part of the "more than 90%" of rural dwellers in that lucky group of people, so it is unlikely we'll ever get any sort of useful internet or cellphone coverage out here.  But we still work via our overly-expensive internet connections.  I run a (small) website building and maintenance enterprise, I do all our banking and business communciation via the internet, publish this website (although being off-line meant I suffered fewer distractions and actually wrote three pages on the trot), work for the Vet Council, etc.  I'm feeling a little stressed!

In the late afternoon, having still not heard when my connection was to be fixed, I wrapped up, filled a hot-water bottle and we went to town, where I sat in the library for an hour with the ipad, trying to download emails, Vet Council work and so on.  But it is school holiday time and there were thirty or more other people there with mobile devices and the wifi connection just wasn't up to the task.  I got a couple of urgent things done, but it was not an entirely successful trip.  If I weren't so sick, I'd go and visit someone with wifi and do it there, but I don't want to pass my cold to anyone so kind as to let me into their house!

I walked across the flats today, for the first time in a week.  I am still coughing, sneezing, sniffling, but feeling a tiny bit more energetic. 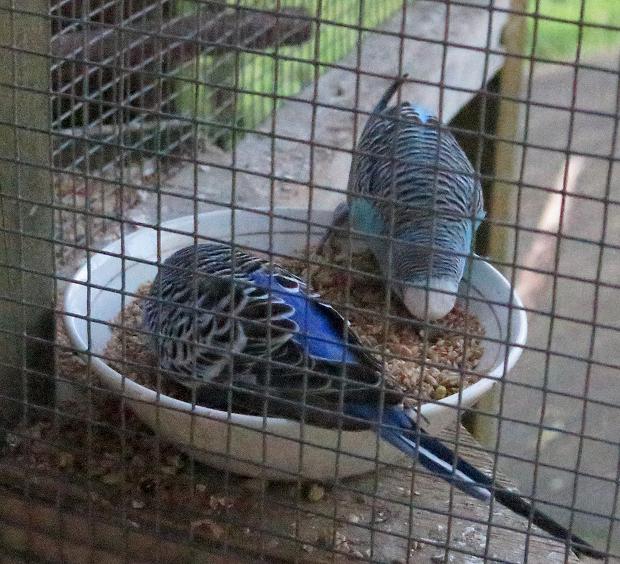 A romantic dinner for two in the budgie cage.  This is Loofah Equilibrium and her boyfriend, the deep blue budgie.  It's quite easy to see which birds are forming pairs.  I'll have to research what their relationship patterns are - whether they're monogamous for a season, or always, or not.

A lot of buzzing attracted my attention to the windowsill, where a wasp had caught a fly and was dismembering it as the fly struggled to escape.  Once the legs and head were removed, the wasp flew off with the body.  It's a brutal world.

A broadband fixing guy finally came today.  It took Farmside's contracting company until yesterday to get in touch with me to tell me when this would happen.  Hopelessly poor service!  They can claim they did it "within four working days", but for me it was five. 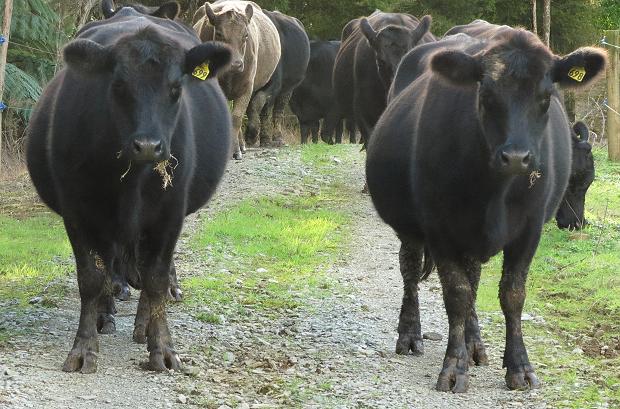 I could have photo-shopped this one, don't you think?  One cow copied and pasted to stand beside herself.  I continue to wish I'd put one of the twin's tags in the opposite ear; if either of them loses a tag, I will do so.

Gem lets me scratch her, but Meg still skitters away from me if I get too near.  Other tamed cows have taken as long to settle down, so I haven't given up hope yet. 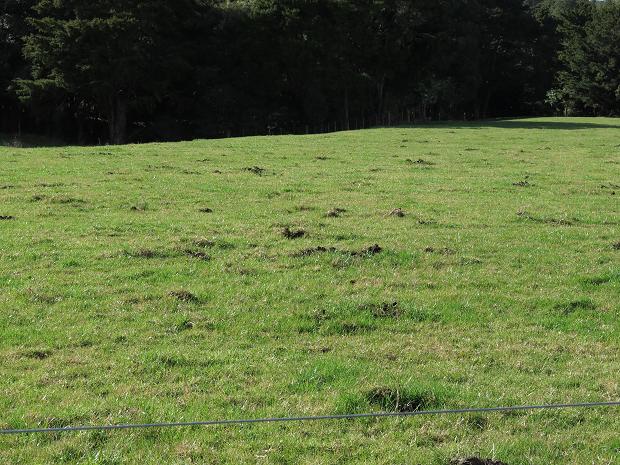 Riding up the Windmill lane I noticed the pigs have been back there again.

Just before dark I took folding chair, hot water-bottle, hot Peppermint tea and the .222 rifle and ear plugs and sat for nearly an hour under the Puriri in Mushroom 1, but the pigs didn't appear.  They used to come at 6.20, but this must be a different lot and their pattern has changed. 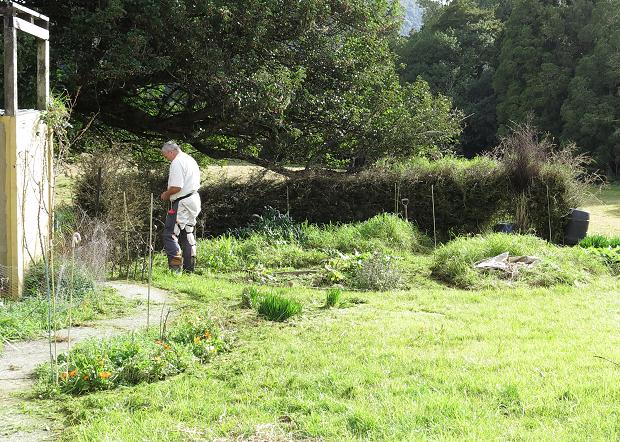 The (mainly) Totara hedge in the garden has become straggly again, so Stephan prepared to trim it, with string lines set up to ensure he kept the top level.  The wild-looking growth at the right end is a Kahikatea, which is not really a good hedge species and will probably have to be cut out.

We went out!  Patua, a play whose subject matter didn't seem terribly uplifting, was well worth going to see and I really appreciate live theatre.  The audience was rather larger than some of our nights in the Little Theatre with Kaitaia Dramatic Society in days gone by.  I was glad of my hot water-bottle (I know, not something you'd imagine someone carrying around in public, but oh so comforting when one is prone to feeling the cold), woolly hat and scarf!  I tried not to breathe my cold on anyone.