The week beginning the 4th of July 2015.
Saturday the 4th 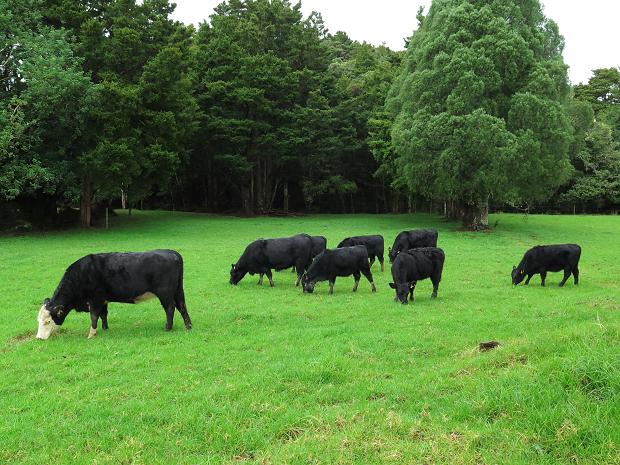 They don't get much of it very often at this time of year, but it's lovely to be able to put the heifers into such green grass for a day or two.  Mowing the paddocks after sowing the rye grass seed has done them a great deal of good - I sowed no seed at this end, but the rye grass which already exists, got a timely start because the Kikuyu was cut low.

Ella arrived this afternoon, driven up by her mothers' friend Lois (who stayed the night before going back to Auckland on Sunday morning). 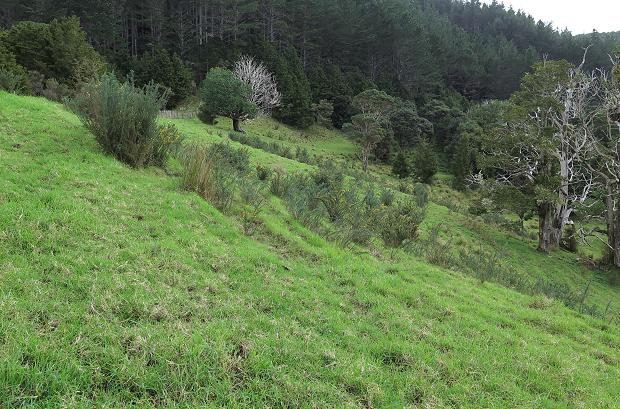 In paddocks like the Middle Back, the Kikuyu continues to grow relatively well during the winter.  This is 18 days' growth since the heifers were last in here.

I opened the gate for the heifers to find their way into the paddock the next time they come up the hill and I'll come back and close it in a couple of days.

On my way back down the hill I took several pictures of exposed soil and soil which has been colonised by lichen and fungi like this.  I am constantly thinking about topsoil, fertility, soil biology ...

These tiny fungal growths looked really pretty, so I brought the picture home for further enjoyment, since I can't really see anything clearly without enlargement. 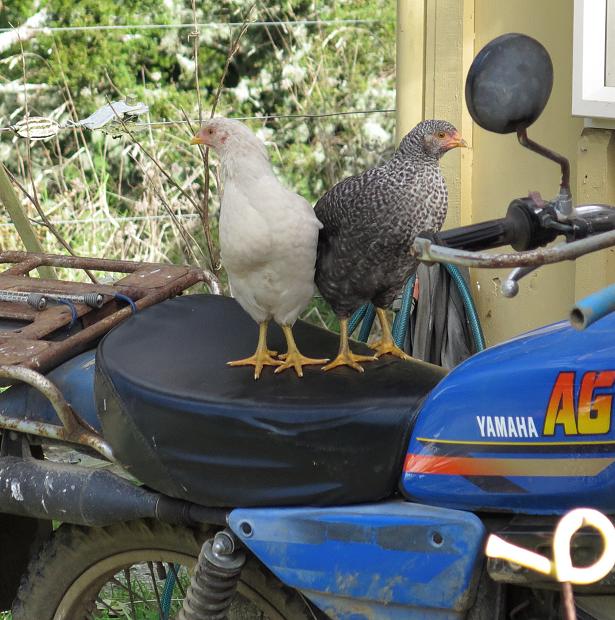 These chicks are delightful little birds.  They have a very pleasing shape, are proving very tame and friendly so I can pick them up and hold them without too much upset.  I'll miss them when they go to live their lives with William and Elizabeth.

I'd really like to get some more eggs from the same parents and incubate them under the same hen here, since the combination has worked so well.  The chicks must be genetically calm, but the hen has also been a very good mother, much less alarmist than the one which hatched the goslings.  I've put a band on her leg so we can recognise her when she goes back to live with the others. 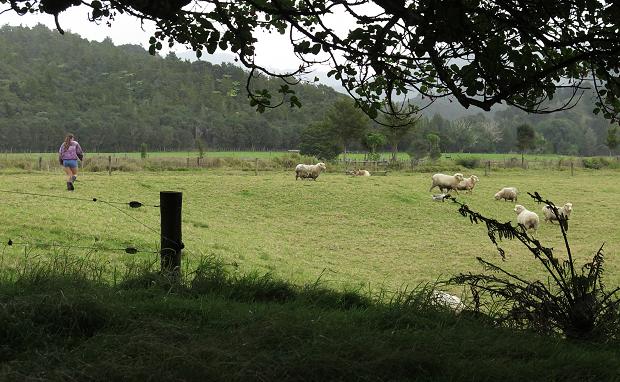 Another for the list of reasons we should have had children: someone to go out and turn the sheep over when they're cast.

This became Ella's job during the week whenever we spotted legs in the air.  She'd take a flax flower stem to ward off the geese as she went through the gate, then walk over and roll whichever fat woolly madam had lost her gravitational perspective. 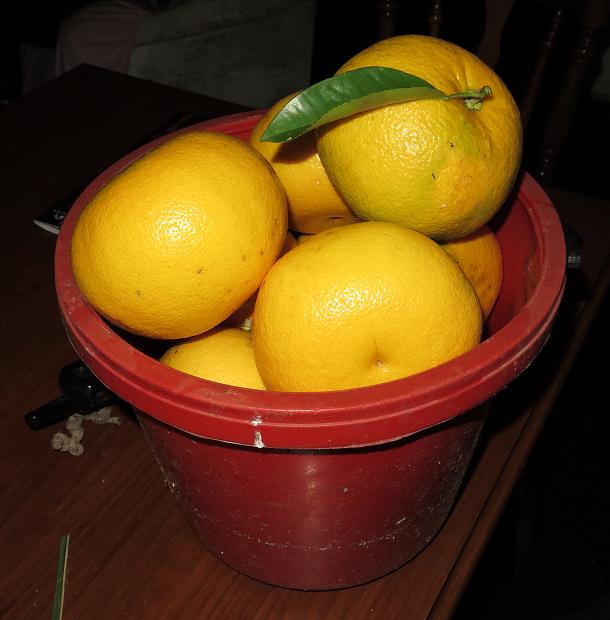 The grapefruit tree is doing very well.  Stephan brought these fruit in to make marmalade.  The rest he'll pick and slice up before freezing in measured lots ready for making marmalade later in the year.

Poly laid these three eggs and has been sporadically incubating them. 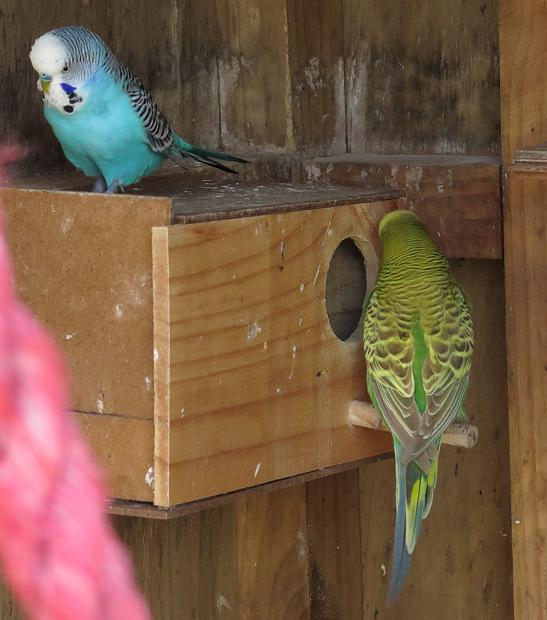 Eco and Poly, parents of the three eggs. 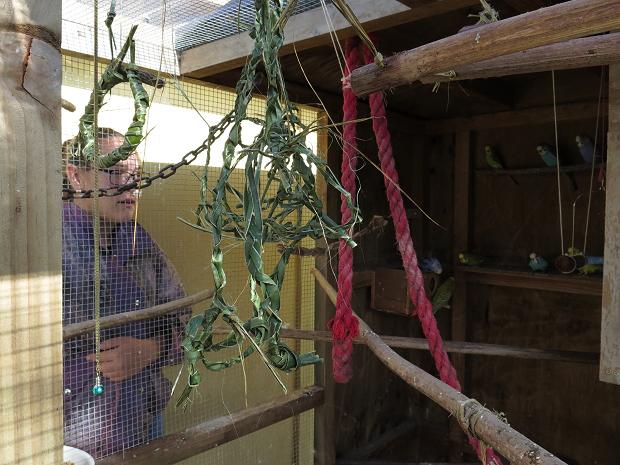 Ella and I spent a couple of hours sitting plaiting flax into jungle-gym shapes for the birds, which we hung from the roof of the cage.

Flax is a great material to work with, non-toxic, can be turned into all sorts of shapes which the birds have a fantastic time trying to demolish. 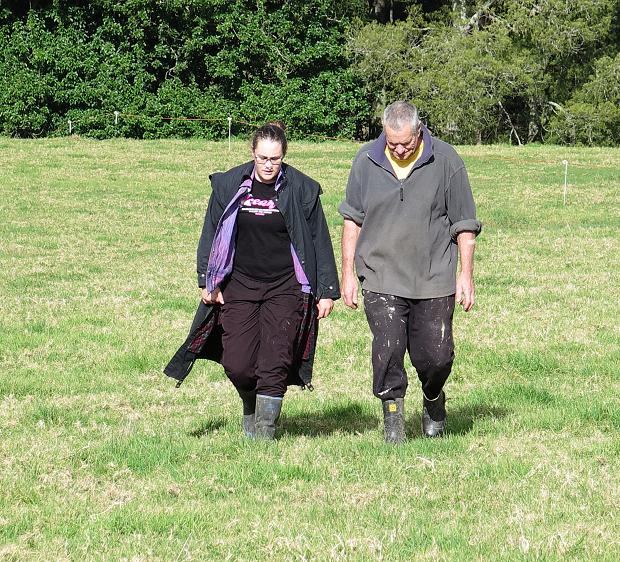 Last week we tried to get the heifers to go down into the river crossing from Flat 4 and across to the Road Flat paddock where the new orchard is.  Today we set up a lane across Flat 4 to try again. 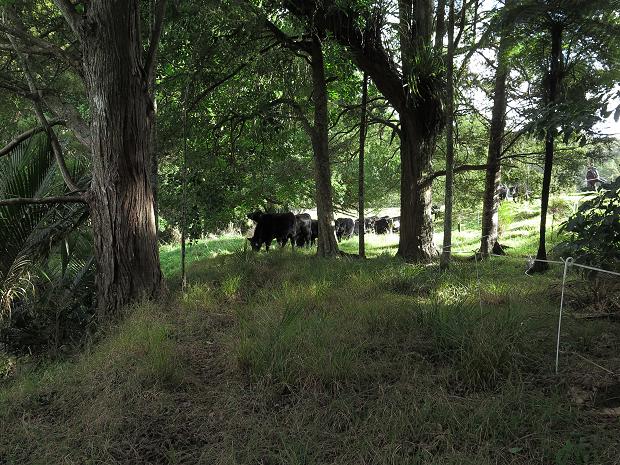 Again we failed.  They would come only as far as the track down into the stream and despite my standing in the river bed calling them, they'd venture no further.

We gave up and sent them somewhere else.  Stephan will come back and do some work on the crossing to make it more enticing for them.

I stopped using the Road Flat three years ago when calves from next door came through the boundary fence.  While there have been visits from the sheep coming through from next door, there have been, to my knowledge, no further bovine intrusions.  This winter is proving harder than usual and there is grass there which could fill the bellies of some of my hungry cattle and take some pressure off the rest of the farm for a few days.  We will get them over there to eat it!

Ella came with a nasty cold and I now have it.  I loathe being sick.  Colds affect me badly and for what seems like a longer time than they lay others low, so I do my best to avoid catching them.  With weirdly juvenile-shaped Eustachian tubes, I'm also prone to serious ear infections when my sinuses are inflamed.  In short I am a resentful and very grumpy invalid when ill. 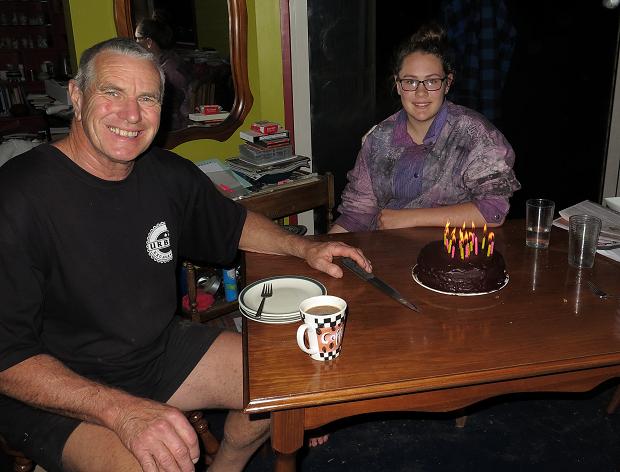 Today would be Ella's mum Michelle's birthday and so Ella and Stephan baked and iced a birthday cake.  It is only three months since Michelle died, so today was likely to be a tough one for Ella and we did what we could to ease her way.

The cake was delicious! 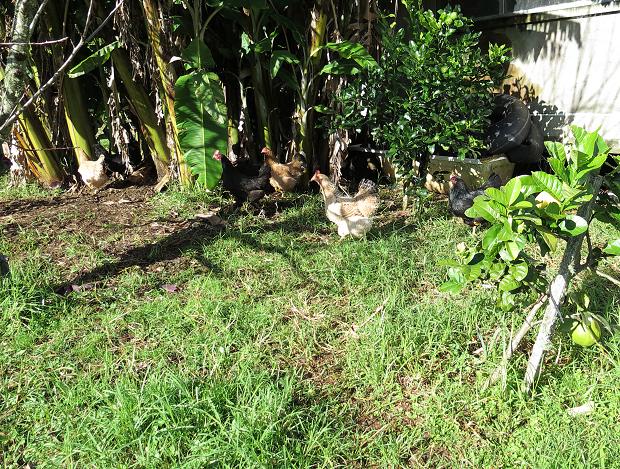 In winter when ground conditions are wet, the hens spend more time free-ranging than in their cage.  They do a lot of scratching around the bananas and fortunately seem distracted enough there to leave the gardens alone.  Otherwise they'd be back in their cage! 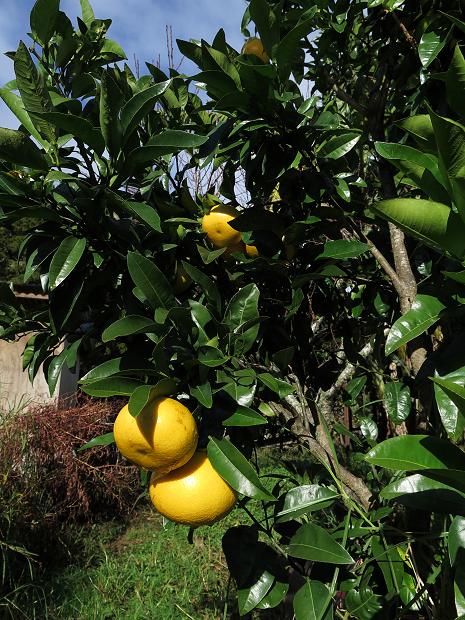 There are still many fruit on the grapefruit tree.

So many times this week Ella has gone out on sheep-flipping duty!  The Kikuyu grass mat in this paddock is quite thick because it doesn't always get a really good chewing in Autumn when I use it for weaning the calves.  Maybe next year we'll try mowing it after weaning and see if that makes any difference to the sheep.

It was a cold and nasty, showery day today with a high of eight degrees Celsius.  That's very cold for this part of the country.  I stayed inside, writing, while Ella and Stephan worked in the shed on a new model dinosaur.