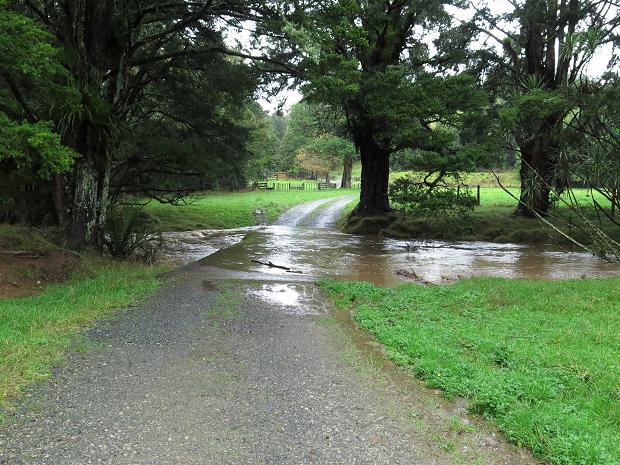 There seemed to be lots of rain overnight, although there was only 36mm in the rain gauge.  For the stream to come up and go over the bridge like this, a lot of it must have fallen in a very short time.  It also knocked out our water supply again.

We don't seem to have as many floods these days but when they happen, they seem more often due to relatively short, very heavy downpours, rather than long, sustained ones. 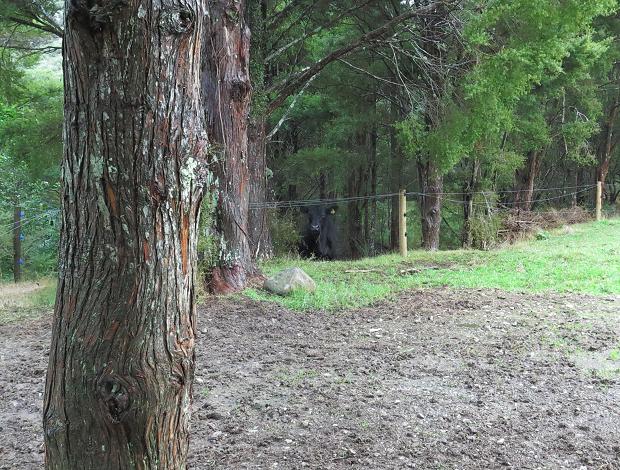 I went out in the afternoon to move the bulls and they were definitely ready to go.  I suspect 128 had been pushed through the fence into the stream reserve, rather than choosing to go their on his own.  He took some convincing to get out again too.

As I'd left the house, I'd realised I'd left my alkathene stock stick behind, but as I'd tried to be really quiet so as not to disturb a sleeping, sick Stephan, I didn't go back.  Of course when I found I had a bull to deal with in close and difficult proximity, I regretted it!

I loosened the wires (fortunately there's an electric fence cut-off switch just there) and hitched them up to form a single-wire barrier instead of three, then tried to coax 128 through the gap.  I had to be very careful not to put too much pressure on him in the corner, where he might have turned on me.  Eventually I withdrew, walking away into the paddock calling him instead, hoping he'd come in the right direction.  By then I'd let the other bulls go, hoping that would have enticed 128 out.  Tricky.

Eventually, thankfully, he pushed under the wires and ran off down the lane to catch up with his mates. 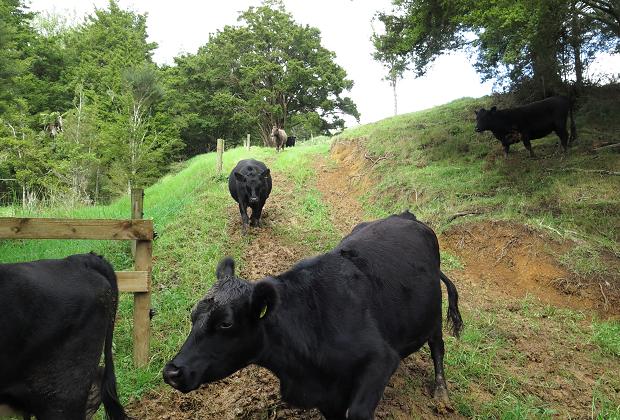 The R3/4 (rising three and four year) heifers have been in the two-thirds part of Over the Road for two weeks and were quite pleased to move to the other bit this morning.  It's good having so much grass for them to eat. 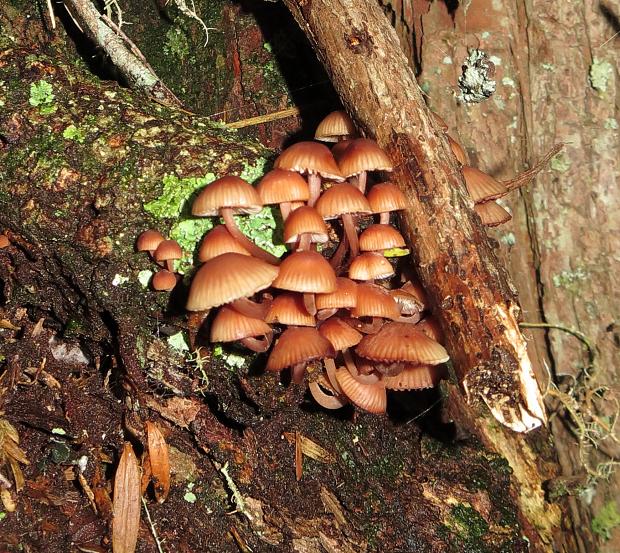 I went up to turn the big tank taps so the water could feed back out to the farm troughs, which are normally fed directly from the pipe coming from the hills.  It's nice to have that emergency stand-by, since the rain keeps falling and Stephan, still suffering with a head cold, hasn't felt well enough to hike up to see what's wrong with the supply.

Standing under a Totara tree on the way back down the hill, in the rain yet again, I saw this colony of pretty fungi.  The vast range of beautiful fungal growth is one lovely bright spot in the dismal onset of winter. 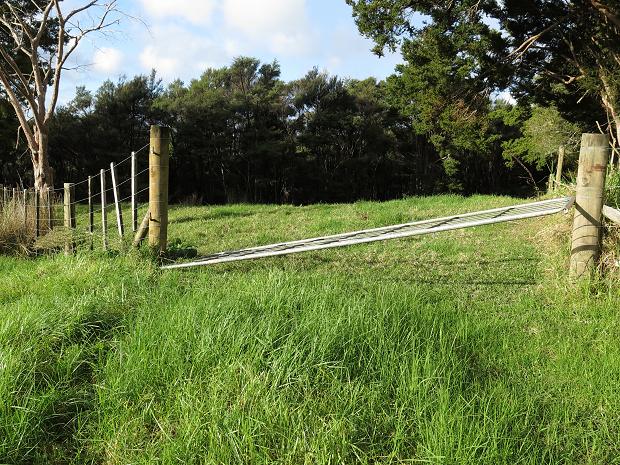 When I went to check on the R1/2 heifers (that's the recent weaners, rising one year and the pregnant rising two-year-olds) I was surprised to see a couple of mature faces amongst them.  I'd left the gate open to the Middle Back paddock, where there's a lovely lot of grass, several days ago but the heifers had failed to move there, preferring instead to stay in the Spring paddock.  But the cows were supposed to be in the PW.

Walking up through the long grass in the Middle Back, I could follow the footprints of the two cows, 548 and Emma 93, who'd run down the hill and through to join the heifers - interesting that company is often much more important than feed.  As I walked up, I spotted how they'd got from the PW in to here: the gate had been unhinged.  It has a padlocked latch, after we were inconvenienced by some wandering (without our knowledge or permission) pig hunters a few years ago, who left all the gates through which they'd passed open.  I didn't discover that fact until my cow mob appeared in all sorts of places they weren't meant to be.

My first thought was that we'd been trespassed upon again, but in retrospect I have concluded that the trespassers were probably four-legged and porcine.  Those feral pigs are pretty strong and one squeezing under the gate at the hinge end could lift it off the gudgeons.  Luckily only two of the cows found the opening, or I'd have less grass here than this.

Fortunately it was easy enough to let the R1/2 heifers out of the Spring paddock without the two older cows going with them, and then I set the gates so the rest of the mob could join those two from the PW, along the lane. 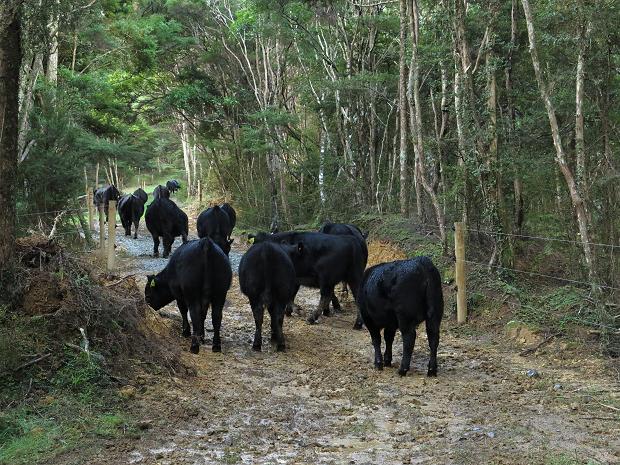 The alley into the Swamp East paddock is working well.  These are the R1/2 heifers.  One day I'll refer back to this picture with its slippery clay track, from a picture of a firm, metalled one. 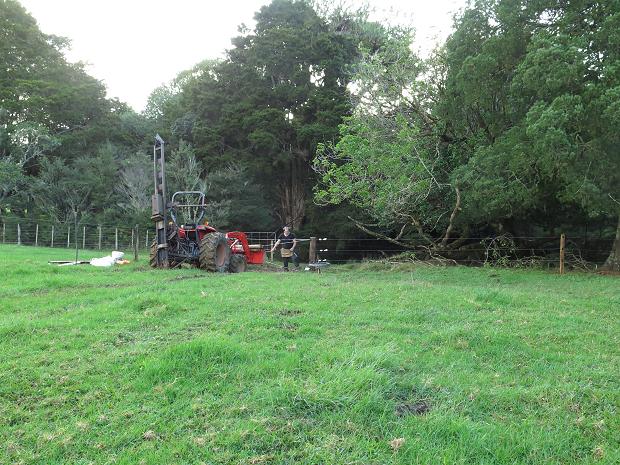 Stephan was determined to finish the riparian fencing before he turned 63 today.  Bearing in mind that he was born in Wales, he's probably managed it, even though I took this picture of him tying the tape gate at half past four this afternoon.

There is one more tiny bit to do, but essentially that's it.  The last piece requires his banging in a few metal waratahs down around the right side of the track to the stream to hold one wire.  It only needs to be a guide for the cattle, to stop them jumping up the bank to the Puriri trees.

We plan to go out for a restaurant celebration meal to commemorate the completion of the project, but in the mean time Elizabeth and William had invited us to dinner to celebrate the birthday. 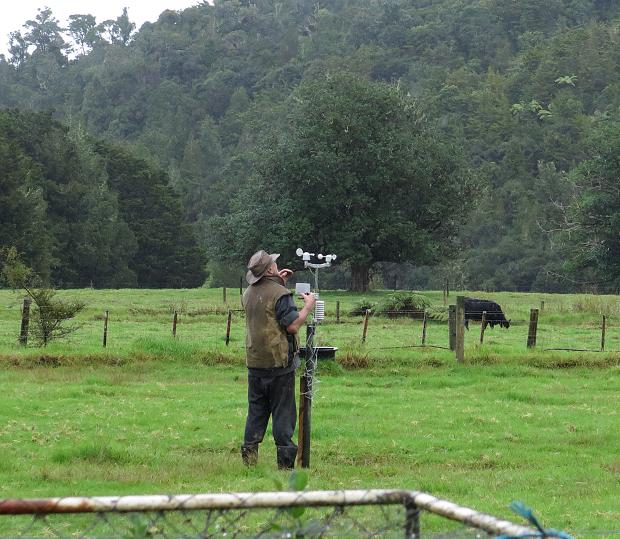 I only rarely buy things on a whim, but this weather station came up on one of those internet one-day sale sites and I thought, why not?

For a few days the sensors were in the garden and I was very frustrated that the indoor monitor kept losing the signal from outside.  It turned out that there must have been a lot more signal interference there than I thought, either from our Freeview satellite dish and cables, or perhaps even because of where the main power cable comes in to the house.  When I moved the indoor unit and it then worked reliably, Stephan took the outdoor equipment further away, into the House Paddock.  I think it will eventually go over into the fenced area by the drain, but we thought we'd make sure it was all working properly first.

Now I can compare indoor and outdoor temperatures and humidity, wind speed and direction, barometric pressure, rainfall as it happens (without getting wet!) and it all gets recorded in a spreadsheet on the computer.

There is the usual downside though: one can collect a huge amount of data, but unless there's a method of collating it, it's just a lot of numbers.  I am experimenting.  I'm also comparing the new system with my manual collection of daily highs and lows and rainfall, to ensure this system doesn't skew my long-term data collection. 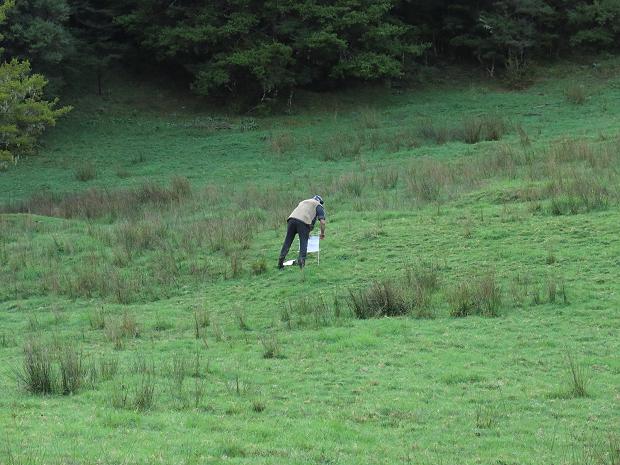 Yesterday Stephan brought home a borrowed .222 rifle which had been lent for me to use to shoot pigs.  This afternoon we went out into the Tank Paddock (was the Camp, but now it's subdivided from the bit we camped in and this is where the Tank is, breaking the usual pattern of naming paddocks for things which no longer exist) to test the sights.

I took a couple of electric fence standards, four clothes pegs and a few sheets of A3 paper with crosses on them and after trying one (very loud) shot, Stephan walked out to see if I'd hit the target.  What a trusting man; I still had several bullets in my pocket!

I had made a hole about an inch from the centre of my X.  The second shot was on the other side, about twice as far away from the centre.  I reckon that'll do the trick.  The thing goes off with a hell of a bang and a split second before I expect it to when I squeeze the trigger.  It's not a big firearm in the scheme of things, but it's the biggest one I've used so far.

I've been going out looking for pigs most nights in the last week and taking shots at the small ones with the .22.  I've seen them just on dusk and again later on around 10pm.  This evening, having not seen any at 6pm, I went back at 8.30 and in the dew on the grass in the torchlight, could see their tracks where they'd run from one newly-turned area of soil to another.  They must only just have left as I arrived. 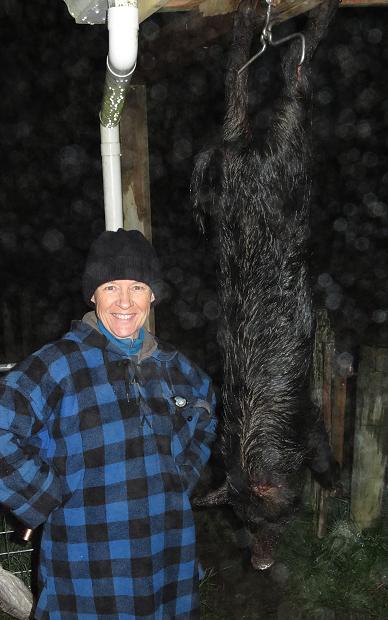 Today I had a plan, which was then partly scuttled by a very heavy downpour in the afternoon, after a perfectly fine and sunny morning.  The plan was to set myself up under the Puriri tree in the middle of Mushroom 2.  I was going to take a deck chair, a thermos of tea, a hot-water-bottle, the radio to listen to, the torch and anything else I could think of for my comfort as I sat there.  In the end, everything still being dripping wet, I took a towel to sit on, the umbrella to shelter under and the hot water-bottle for my knees - of which I was very glad, because I get really cold sitting still in the cold air (the temperature dropped to 3.5°C overnight).

I settled down, got myself organised, found where I'd stashed the bullets and loaded the rifle in preparation and just as I had everything ready, realised there was a group of black pigs snuffling around across by the trees.

I shot the biggest pig, went to check she was dead and went back to my tree to wait and see if they came back.  A few minutes later I saw lights go on at home and called Stephan on the radio to ask if he'd like some pork.  Stephan came out with a knife and gutted the pig and took it home.

No, I don't really like killing things, but I prefer my new sense of potential influence on these animals which are wrecking my pasture, to my sense of hopeless resignation in previous weeks. 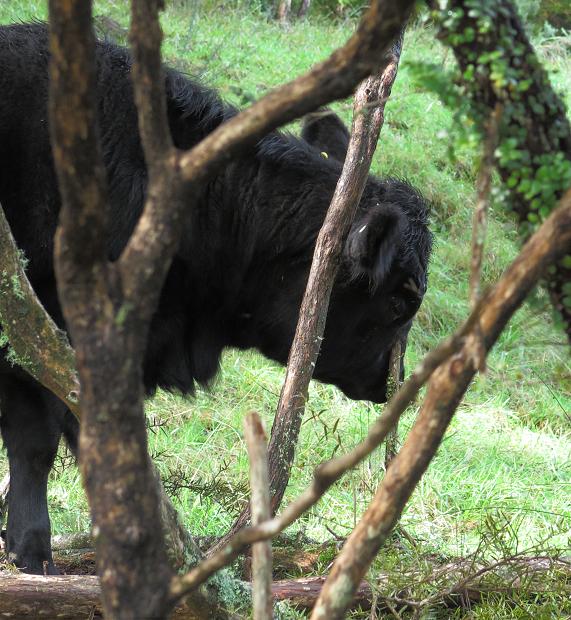 The young heifers seem really happy in the Swamp East, most of them sitting around quietly, some just grazing.  I found Ida 145 amongst some trees, scratching her face on a snapped-off branch; it obviously felt very good!

I went out hunting again this evening with a folding deck chair and sat waiting for the pigs to come.  I got a bit cold so went for a walk out the other side of the farm and when I came back, there were the pigs, rooting around in Mushroom 1 - they would have come right past where I'd been sitting, if I'd not been impatient.

The pressure of my former great shooting record got the better of me tonight and I blasted at two pigs and missed.  The rifle is pretty heavy and I was trying to hold the torch as well and I suspect my arm dropped as I fired.  They were running off and I didn't think I had time to reach a fence post upon which to steady the rifle.  Too much haste!