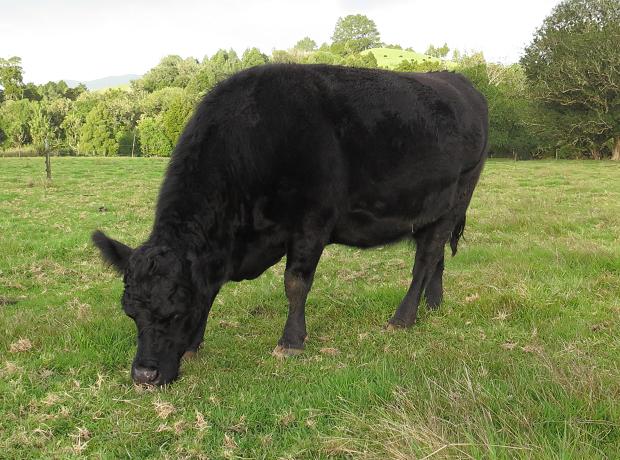 Queenly 23, fat and hairy, enjoying her last autumn, although she of course is unaware of that.  Unfair, you cry?  Few of us know in advance that we're enjoying the last instance of any part of our lives.  At least her end will be quick, after a comfortable life.

Queenly 23 was the last daughter of Queenly 486 of Taurikura, the cow I bought at auction when Eric and Barbara Jagger's Taurikura Stud was dispersed, an occasion I can still remember for the adrenaline rush of bidding higher and higher against the rich boys who also wanted that cow.

Queenly 23 has had a bit of a chequered history, some of it not her fault.  Her first son turned out to be a carrier of the Neuropathic Hydrocephalus genetic defect and so left few descendants here because I found out about that problem before he'd been much used.  The lovely white-faced 714 is his grand-daughter.
Queenly's fourth calf died before birth for some reason, as has her last.  Victoria 118 was Queenly's sixth calf, the heifer with the weird hoof disorder.    Queenly is now ten years old and with those three strikes against her, it's time for her to go. 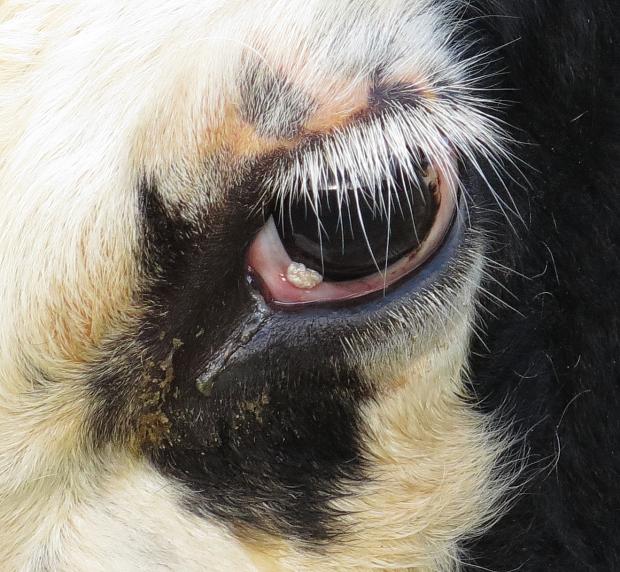 517's eye lesion has changed.  I have consulted a couple of vets by email-with-pictures and both say it's probably an early cancer-eye and that she may require a veterinary certificate to travel to the works.  I'm currently investigating that issue further.

If I were a more hands-off farmer who couldn't get as close to the animals as I do, would I even have seen this?

The veterinary profession has been subject to an educative push by the Ministry for Primary Industries on the matter of transport certification, but it's not something I've been aware of as a farmer.  I had only previously been aware of the requirement to certify for transport in some cases because of my work with the Veterinary Council. 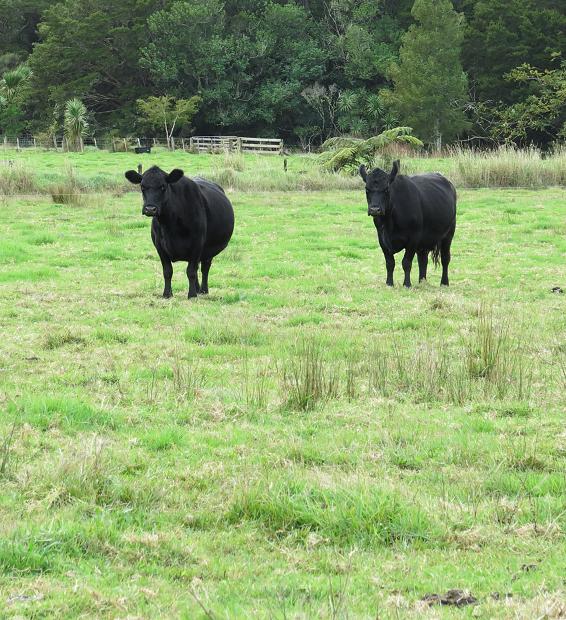 When I walked along the lane to the Flat 3 gate calling the cows, all of them came walking towards the gate except Demelza and Eva.  It's hard to see in the picture, that they're standing by the fence at the far side of the paddock.  Demelza often does this, making me walk over and bring her to the gate; now daughter Eva appears to be developing the same habit. 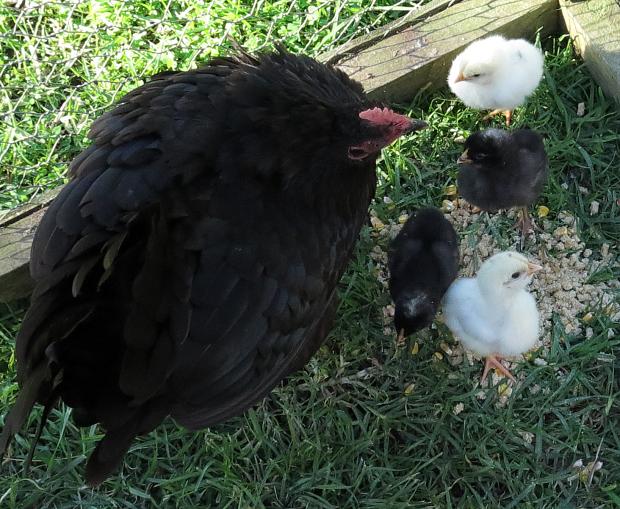 The little chicks are looking good.  If they're healthy and active, they usually stay that way. 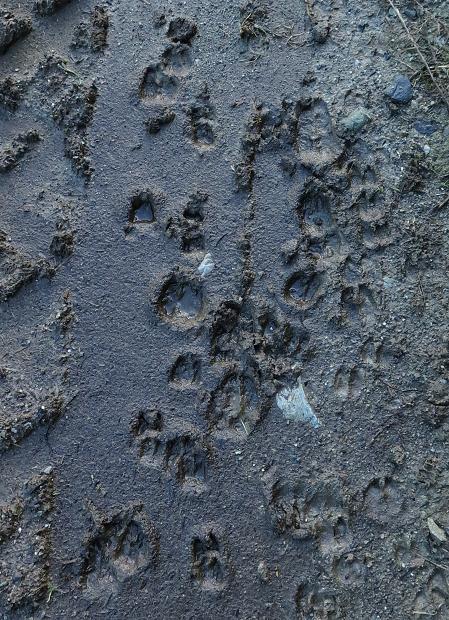 So many feral pigs!

There are signs of rooting in many paddocks, primarily where we've sown and mown.  I can see from the tracks they leave where they primarily come from.  This year they seem to be spending all their time down on the flats, with little evidence of any out the back of the farm.

If we came and sat out here in the dark and waited, we'd be able to shoot them; but we don't know when they come through and by the end of the day, the last thing I want to do is come and sit out here in the cold. 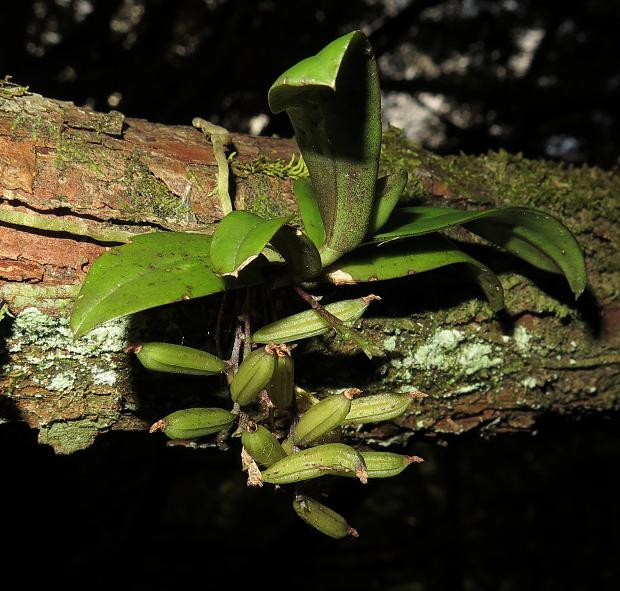 A Drymoanthus adversus with its growing ovaries of seed, which are always surprisingly larger than the flowers (and here a close-up). 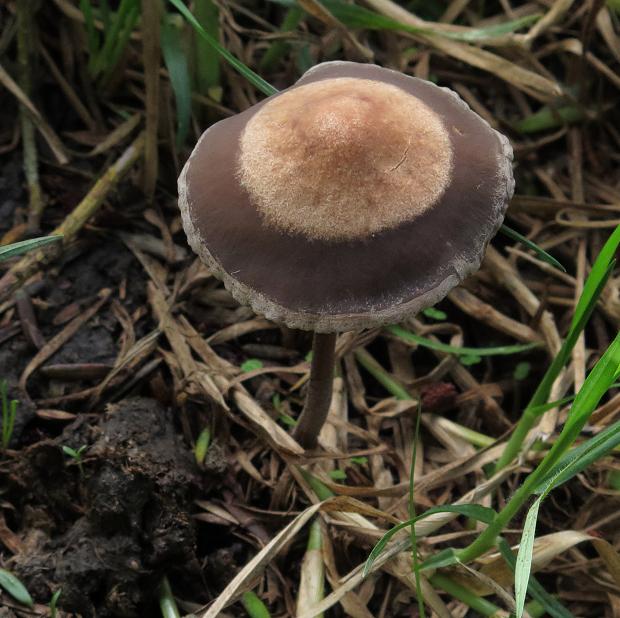 What a pretty toadstool.

Nope, no idea what it is, just spotted it growing in the grass. 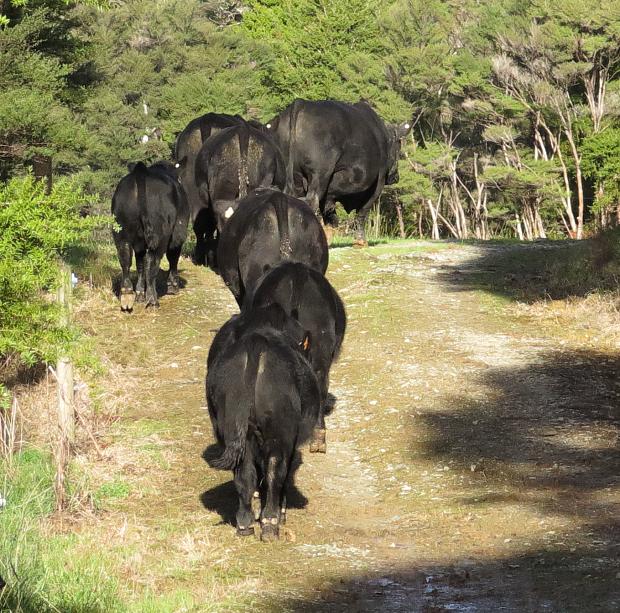 A load of bull; too many bulls.

Nearly-two-year-old 128 will soon be off to the works (he's an AM carrier and I intended to use him only for one season over a few cows) and I think I'll send Imagen's son, 133, as well.  If 133's calves turn out to be spectacular, Imagen's still here and there may be the opportunity to keep another of her sons.

If someone wants to buy a bull this year, I'll sell one or two, but otherwise I'll "play" with them in my own herd next season.

I'm still keeping big Mr 87, who's now five and a half years old, because I like his daughters and grand-daughters and he can still go over the older cows, who are unrelated to him. 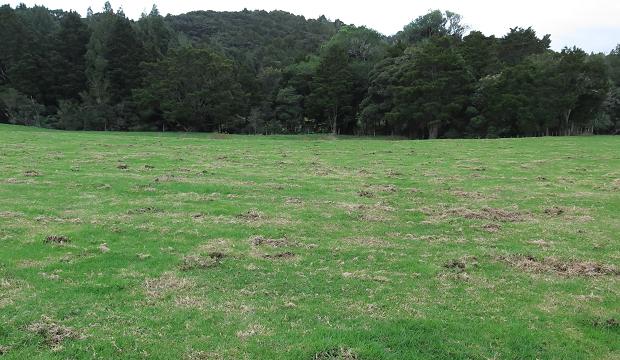 This is now getting serious: all those brown bits are where a multitude of pigs has rooted through my new grass to find whatever they eat beneath.  I could cry. 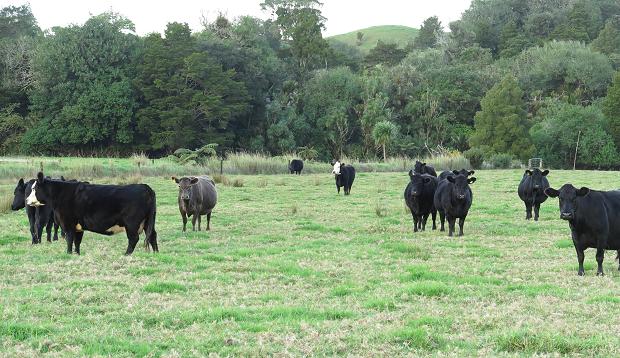 I live my life in photo captions, because I write this website.  But Tuesday the 19th of May and its happenings have fallen out of my mind altogether and I don't know what I had in mind when looking at my cows this afternoon.  I was preparing for a whole day out tomorrow, so was probably distracted.

Here they are in Flat 2, a paddock which could really do with the mower treatment to take down the remaining mat of Kikuyu.  But the cows will chomp that down over the winter.  It will be interesting this year to compare paddocks like this with the mown areas like the Windmill, whose pasture is otherwise very similar. 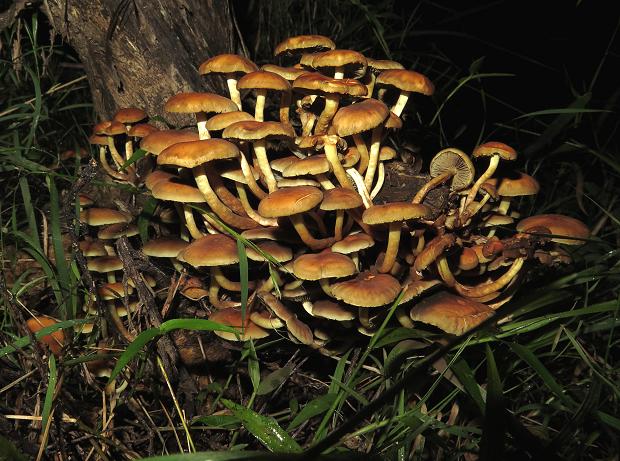 I have absolutely no memory of taking this picture, but it must have been somewhere out in the Spring Paddock, where I was checking the young heifers.  I think I had to walk around for quite a while looking for a couple I'd not seen for a day or two, so covered quite a lot of ground.

I drove out the gate this morning just after seven, to get to Kerikeri for the second day of the Understanding Your Farming Business course.  Today was mostly about analysing financial accounts as received from our Accountants and equipping us to be more involved in their production, so they provide the information we really need.  I'm quite clever enough to be able to read the accounts, but have never really bothered to get right into it because measuring our progress from a financial point of view has been unimportant to us - even something we've refused to do in opposition to the "make more and more profit" motive of most farmers, regardless of the environmental and other natural costs.

It was a good day and I learnt some particular things which I ought to have known, but had never quite understood.

At about three in the afternoon I realised with horror that I couldn't remember having turned the ute lights off when I'd arrived in the morning.  I'd set out in the dark and when I parked, had stopped in front of a lavender bush which didn't reflect the light back to me.  At afternoon tea time I went out and confirmed my horrible suspicion.  But in a gathering of rural women there were several with utes with big batteries, three or four (including the ones behind our seat) sets of jumper leads and it took only a couple of minutes at the end of the day for a couple of us to push the ute out into an open space and start it from someone else's battery.  My battery was so flat even the clock had to be reset.

Driving down in the morning I felt quite tearful going through Mangamuka Bridge, past the still-smouldering remains of the Radio Tautoko building which had caught fire on Tuesday evening.  Awful to see such an important part of a small community destroyed.

I had hoped that while I was out today, Ryan would have come with the fertilizer and that job would all be done.  But there'd been further hold-ups and Ryan and I talked this evening, to confirm his visit tomorrow. 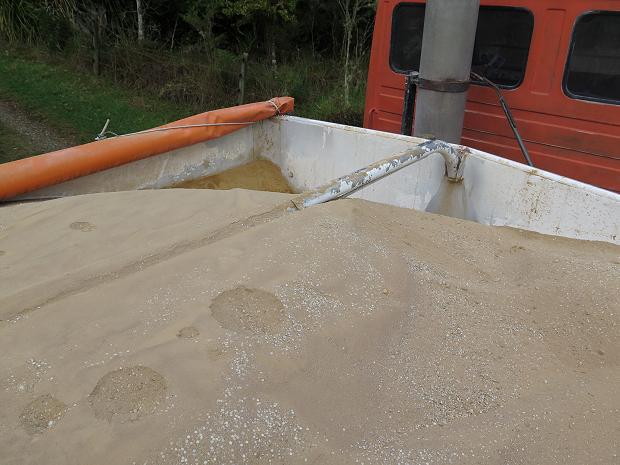 Fertilizer at last!  I climbed up to have a look at the stuff - RPR with bits of Molybdenum, Sulphur and salt.  There was about seven tonnes in there. 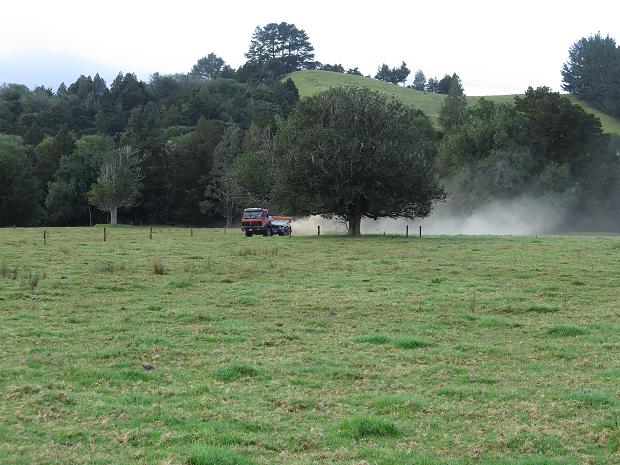 Ryan set off across the flats and I jumped in the cab when he reached the top of Flat 3. 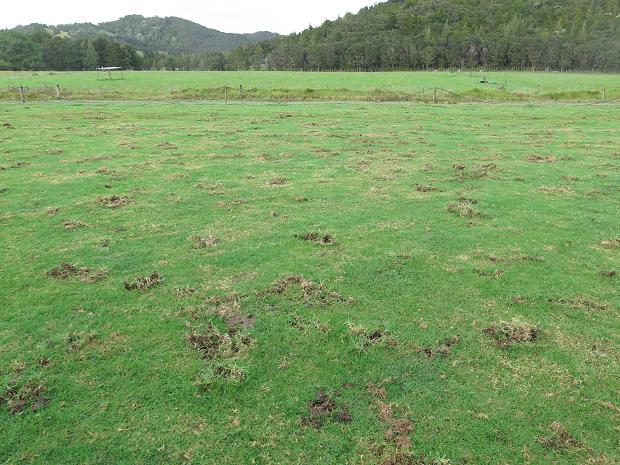 From up in the cab the pig damage was even more horribly obvious than down on the ground.  This the Windmill Paddock (as in the earlier photo, from the other direction), in the area I sowed grass seed.  The worst damage has been in those areas I sowed. 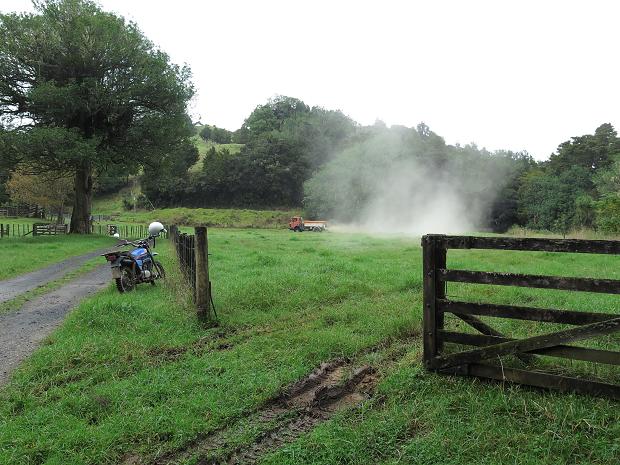 These wheel tracks going into the Pig Paddock show how near we were to not getting the fert on.  The wheels broke through in a similar way in the Bush Flat, where it gets very wet in a couple of places, but everywhere else, apart from a couple of gateways, it was ok. 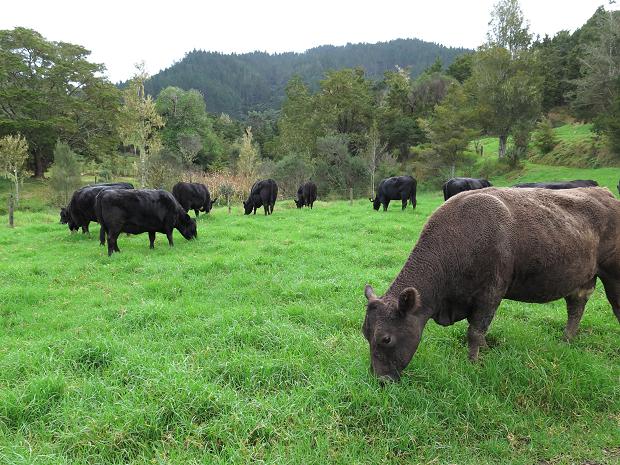 It's nice still having grass around to feed the cows, the cow mob now in the Big Back North - with the big swamp behind them in this picture. 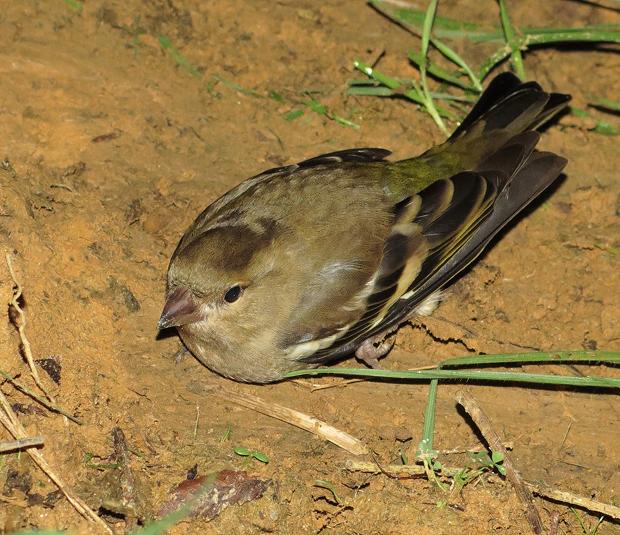 After checking on the heifers Over the Road, I walked back down the hill and this little bird, a Chaffinch fluttered in short, disabled hops, down the track in front of me.  I encouraged it toward some grass cover, since I couldn't catch it, and hoped it would be sheltered enough to survive the cold night and recover from whatever was wrong. 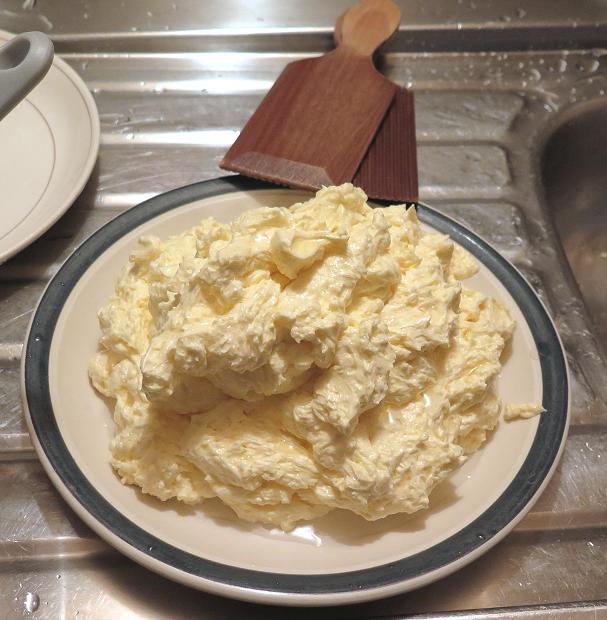 A dinner-plate mound of washed butter, just before I used the wooden pats to get the water out and pack it away in the fridge and freezer.

There is so much cream at the moment that I sometimes fail to get to it in time and shamefully waste some.  I keep meaning to make butter but then there's always something else to do ...
From the freshest cream I usually make ice-cream, but then we eat it and that has its own set of resulting problems.