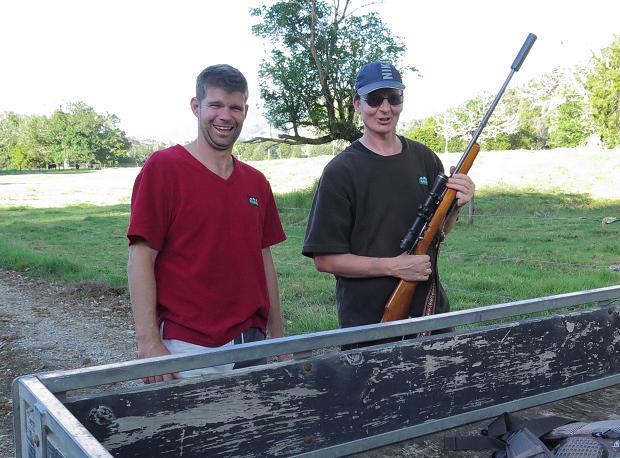 Mike brought fellow-teacher Leigh (who hails from Wales) to visit this afternoon.  Mike was keen to help out with the pig population reduction, bringing his .22 rifle to pop off any small pigs they saw.

I walked with them up to the top ridge at the back and after shutting some gates which Stephan had left open when out with Don spreading fertilizer, I walked home and left them to wander back slowly, hoping to catch pig-walking time at dusk.  They didn't see any. 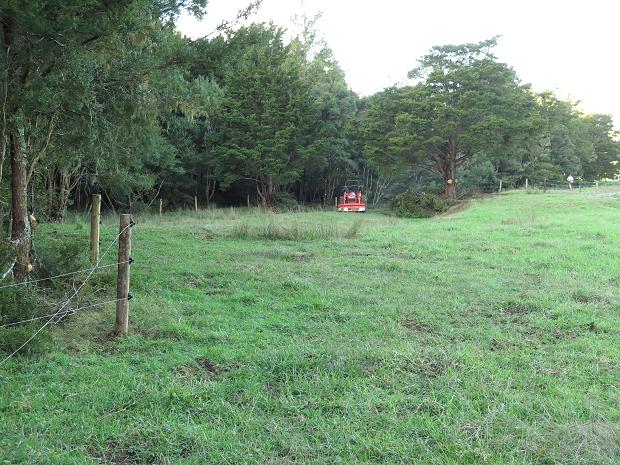 Meanwhile Stephan was fencing as usual, this time about to finish the flat area on the Mushroom side of the Small Hill.  It's one of those little "nowhere" areas we've ended up creating as part of the riparian protection project.  We will possibly put a gateway up where Stephan is standing in the picture, with another on the opposite side of the lane, in the corner of Mushroom2, which will allow this area to be used with either Mushroom 2 or 3, by setting the gates to allow the cattle to cross the lane between the grazing areas.  Otherwise we will need to install a trough in this area, which at present is not a priority - a luxury trough, some time in the future. 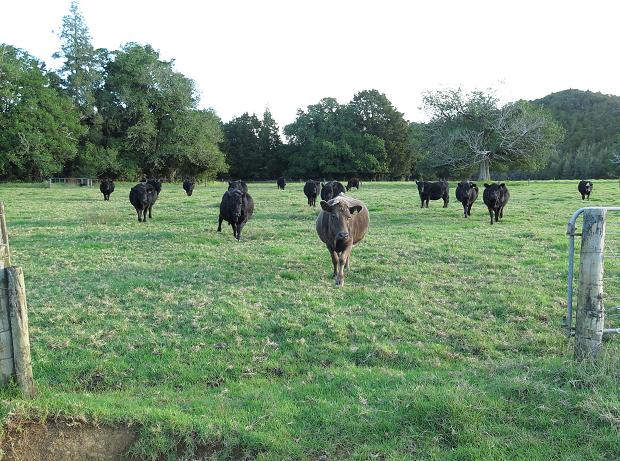 I'm grazing the young heifers across the flats to reduce the pasture levels before the rest of the fertilizer comes, because depending on the rain afterwards, I may have to wait for a while to graze it again.

I rode out to see how Stephan was getting on in the next fencing area and met these guys in entirely the wrong place!  They were in Mushroom 1, but for some reason many of the cattle like rubbing their noses against the gate latch and often accidentally open the gate.  During weaning, when it would have mattered a lot if that had happened, I tied it closed.  Later in the day Stephan put a second latching hook on the gate, so it can be secured on the outside of the post as well as the inside. 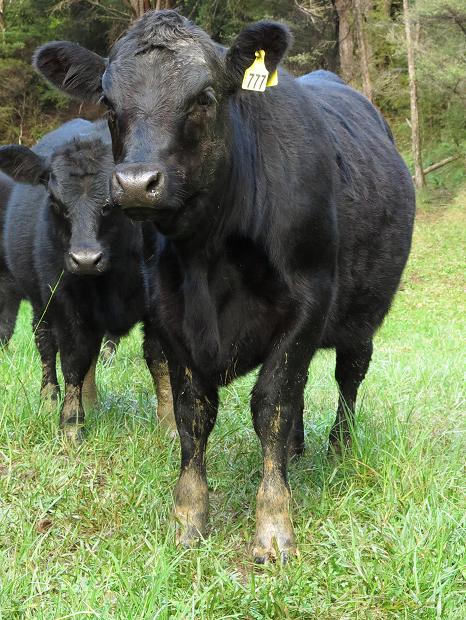 I took some pictures of Jet 777 for a skite session on the LSB discussion forum.  I don't think she has a very attractive face at this stage, something I remember from the look of her great-grandmother Isis.  The two daughters Ivy produced from the inseminations by Stevenson Fortune 425C were as ugly as sin when they were little, gradually growing into their own faces as they matured. 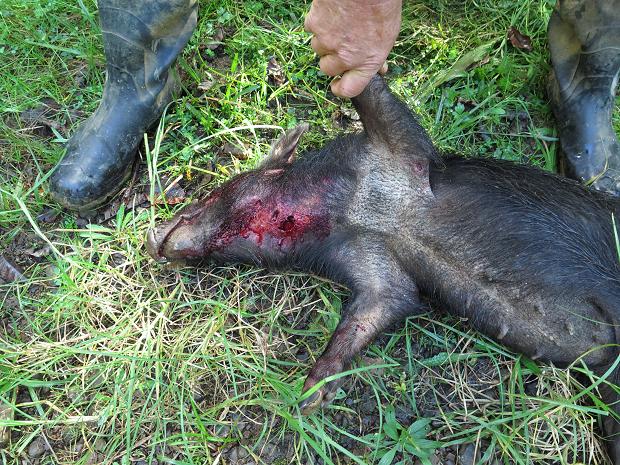 Stephan called me on the radio to say a pig had just walked up the track past him and would I please bring the rifle?  It was a very oddly-behaved pig and as I aimed my rifle at it, I saw why: it was bleeding from its mouth, obviously in confused distress looking for its friends, or just wandering around in pain.  We killed it and then inspected it, finding pig-dog bite marks in several places, most seriously around its throat. 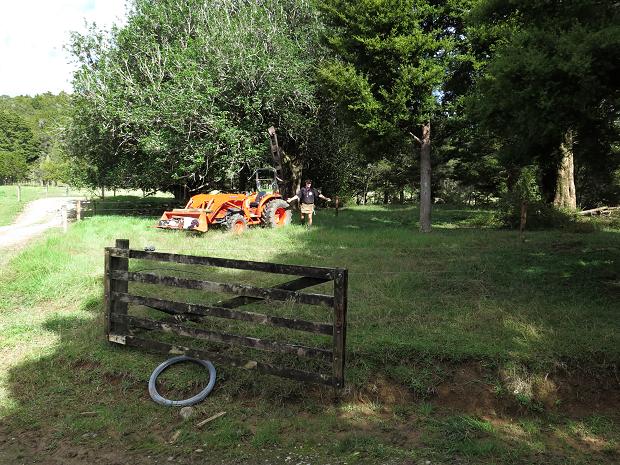 By three or so the little fence in the front corner of the Small Hill paddock was finished.  It's another of those stupid little bits which are a bit pointless really, but if we don't keep them in grass, we lose too much area overall.  This bit will satisfy the house cows for a day or so, with nice tree shelter from sun or rain and they can either walk up the lane to the trough, or we'd let the two of them have access to the stream along the track for the short time they would be here.

Sometimes it's handy to have a little holding area for a few animals, perhaps when I'm drafting a mob, and all it cost is four posts, the wire and insulators.  There are two Puriri here (behind the tractor and the trunk on the right in the sunshine) which needed protection, which determined where the fence should go. 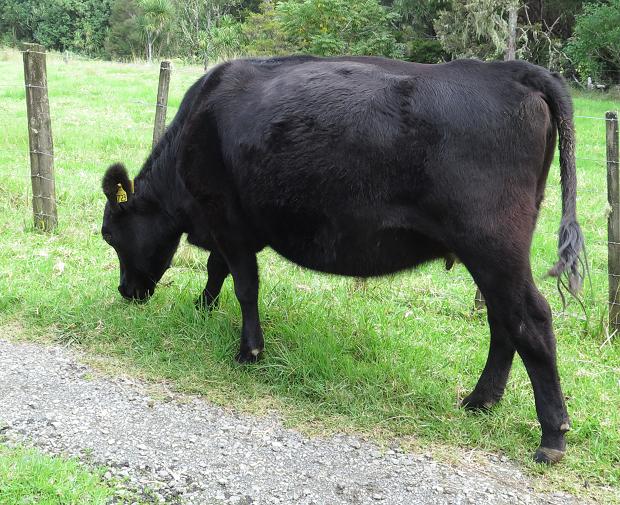 The heifers, having finished the grass on the flats, need to go over the road.  On their way I wanted to weigh them and put some pour-on drench on the lightest ones, including 723 in this picture.  I've been concerned about 723, being so light.  She and dead 719 both had trouble with calving and I have wondered if 723 has been recovering from that stress as well as having reared a pretty good calf, which has taken a lot of energy.  As the daughter of white-faced 517, I thought she'd be in better condition.

When in the yards I connected the scales monitor to the load bars but the system wouldn't zero correctly, continually creeping up or down in weight.  When we had them fixed, they came back with some sort of tape around the monitor and I suspect that was a poor attempt at moisture-proofing the unit.  When I noticed some condensation in the display I put the unit in the airing cupboard for several days, but it has not completely dried out.

Since I couldn't weigh them, I decided to drench only two of them, to a weight estimate about 40kg above their last recorded trip over the scales.  I doubt they're quite that heavy, but better to slightly overdose when drenching than to use too little (a matter of 4mls for 40kg).

When Stephan came to see how I was getting on, we put them over the road and they happily climbed the hill to all the lovely long grass. 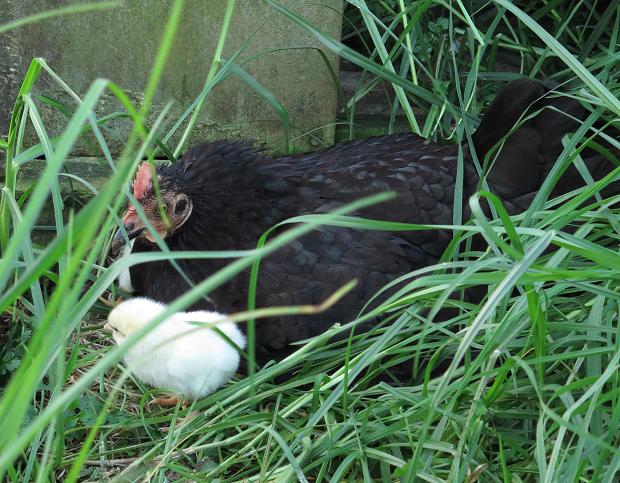 This morning when I checked this hen she was sitting tight on her nest.  Late this afternoon, at the end of a rather cold day, she was off the nest with one hatched chick under her, three huddled, shivering in the nest area (up off the floor under cover), two cold and dead in a corner and three cold, unhatched eggs left in the nest.  They were not supposed to hatch until at least tomorrow, since I didn't set them until Tuesday evening three weeks ago.  I tried warming the cold little hatched chicks, in case they were still just alive, but they did not revive.  I put the other three and the eggs under the hen where she had chosen to move and hoped for the best.

This is disappointing.  If I'd realised they were hatching, I'd have moved hen and eggs to a better location today, instead of putting it off until tomorrow. 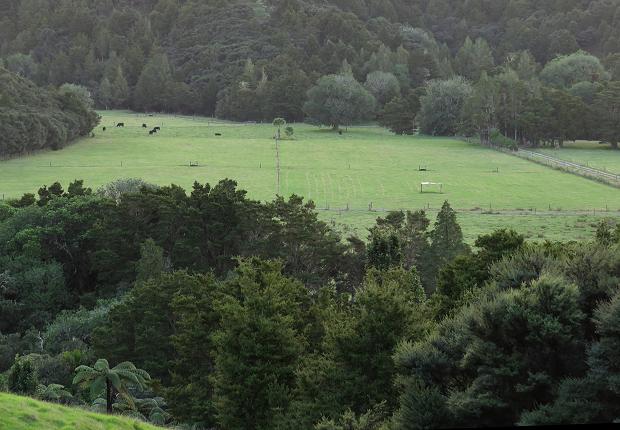 I can see how one of those camera-carrying drone devices would be tremendously useful in farming!  In the mean time I take photos from hills to watch the changes in my paddocks - looking down on Flat 5 with its sown and mown quarters at different stages of growth. 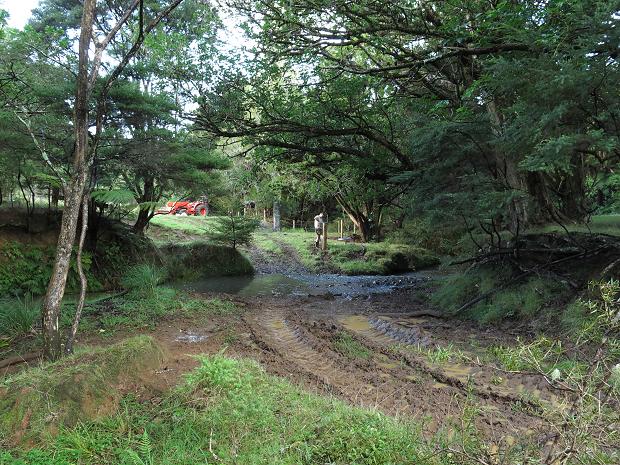 During a rainy morning we both stayed indoors, Stephan making cheese and jelly and I did some reading and watched bits of the Beef Expo on-line - the big national bull show and sale down in Palmerston North, which I attended in about 1998 and we together went to in 2004.

When the rain stopped, Stephan went back to the Camp Paddock, where he has thumped in all the posts and is now wiring up the fence. 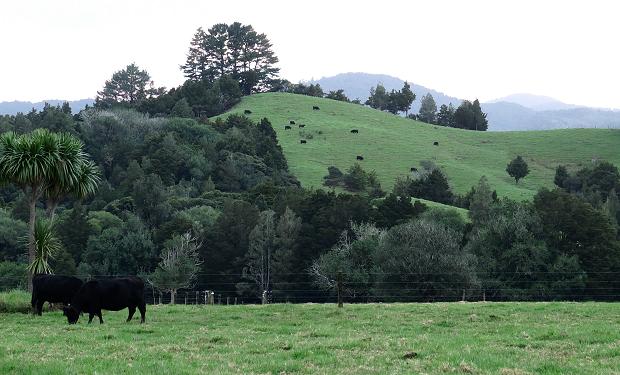 I spent all day reading and writing for a magazine column and didn't go out until late in the afternoon.  I checked and moved the cows and tried to count the heifers on the hill Over the Road without actually going there.  Sometimes I don't seem to do much farming.

I carried on reading and writing.  I have been studying soil.  It's far more interesting than I thought and I've been trying to condense a knowledge bubble the size of a hot-air balloon into a thimble.  How to keep one's mind active!

We've had about 55mm of rain over the last couple of nights, so the ground is feeling pretty wet and I'm beginning to worry that we won't get the rest of the fertilizer spread. 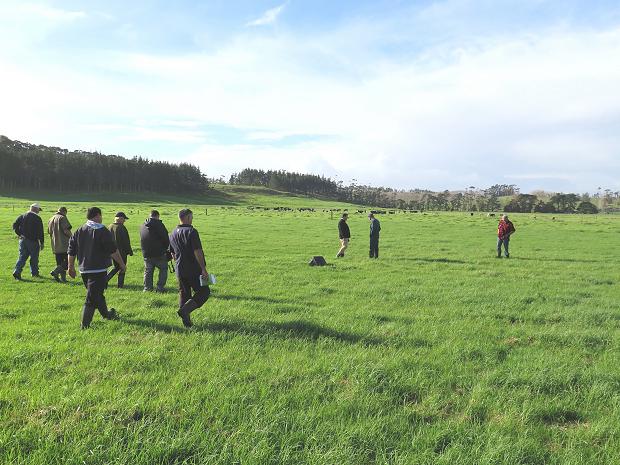 We both went to a farm field day to have a look at a number of options for spending all the increased beef-farming income we (the industry in general) are enjoying.  The field day was proposed to answer where one might most profitably spend $100,000 (oh, we wish!): on fertilizer, paddock sub-division, regrassing, mowing or mulching, or debt reduction.  It didn't really answer any of those questions terribly well, but all but the last are things we're doing and I was interested in taking part in that discussion.

Unfortunately I couldn't be there for the farm visit part of the afternoon, having to go to the funeral of a man long known to my family and whose son is a long-time friend; so I left Stephan the camera and these are his pictures. 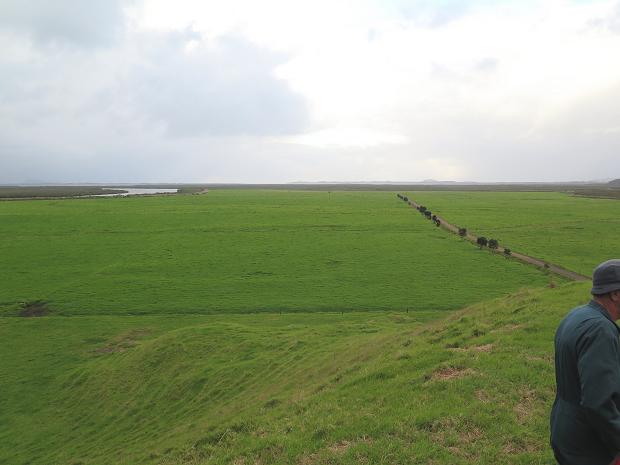 The farm is alongside Highway 10, towards the East Coast and is used to rear dairy-sourced bull beef.

Farms which use a cell-grazing system, where paddocks are divided into small cells through which the animals are frequently moved, usually don't have trees.  I think farmers underestimate the amount of energy cattle expend in keeping warm when there's no shelter from cold weather.

Stephan eventually caught up with me again, just as I was about to leave the Church hall, by which time it was dark.
It occurred to me during the funeral, as I met the three remaining local contemporaries of my father, that the number of those men is dwindling fast.  Of course that's hardly surprising, since Father would now be over 90 and I know that happens to everyone, but there are moments when such things suddenly strike one.  I also felt quite envious during the service, watching the family of a man who had lived long enough to know and be known by his children, well into their adult lives.  My father was a thoughtful man and I would have liked the same opportunity my friends have had in time with their parents.  It's a funny thing, life.