The week beginning the 25th of April 2015.
Saturday the 25th
ANZAC Day 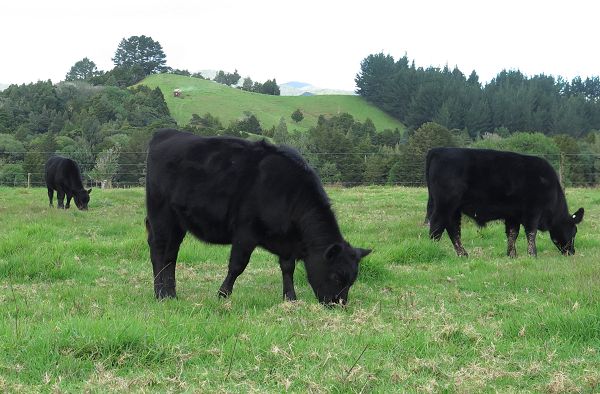 Ryan and I talked yesterday and organised for Don to come and spread fertilizer today - I had to check with him that he didn't have old-soldier connections and therefore an aversion to working on ANZAC Day.

There's a lot of ANZAC commemoration about this year, it being the centenary of the ANZAC landings during World War One.  I've never had much to do with it all after leaving the Brownies and Girl Guides, who were always involved in the day.  Most of my male ancestors either suffered from migraines or psoriasis and were therefore rejected by the armed forces.  That some of them might have been conscientious objectors is also possible.

Don managed to get around several places which haven't had fert in recent years, although he commented that he'd not like to be on the hills after any more rain.  Looks like we only just got away with it!  He's up on the hill Over the Road in this picture, with some of the weaned calves in Mushroom 1 in the foreground. 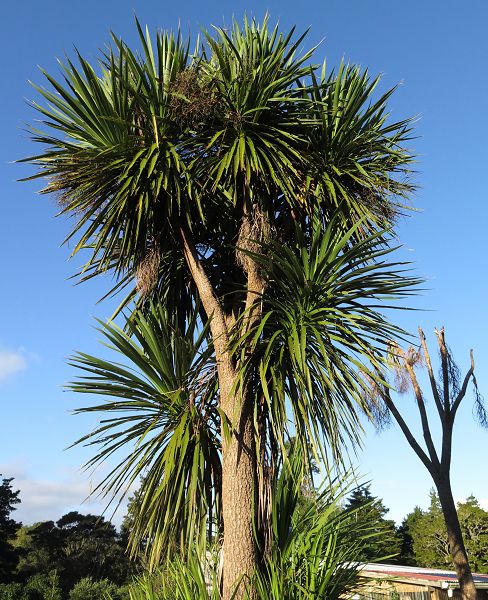 The healthy Cabbage Tree of the pair in our garden is still looking great.

We went out pig hunting again this evening and as we drove along the track past the top end of the Windmill, three pigs ran out under the fence and up the track ahead of us.  Stephan took a shot at the big one and I'd not thought about taking my ear-muffs!  The .303 rifle's bang was so loud I felt completely disoriented for a moment, especially because my ear immediately began to ring and carried on doing so for the next half hour or so.  I'm never doing that again!  And he missed the damned pig. 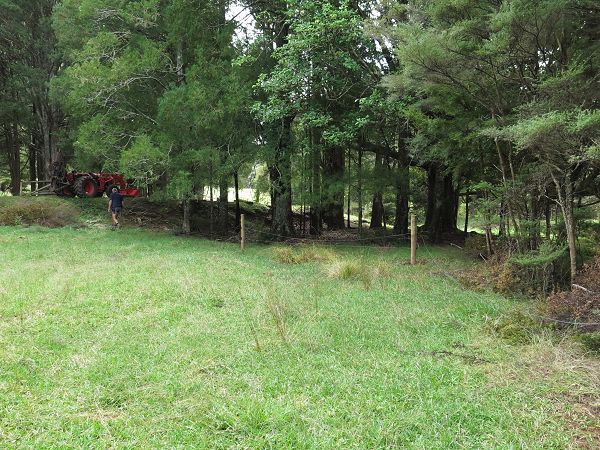 Back to fencing in the Small Hill today.  When he was ready I helped Stephan pull out the second and third wires for this section. 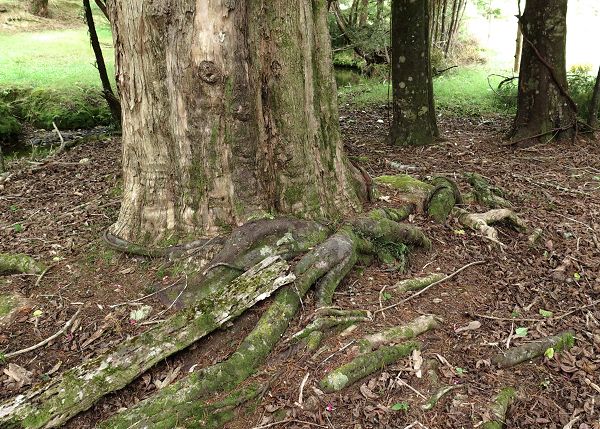 In the middle right of the picture above are these trees.  The Kahikatea trees on the right in this picture have extended their roots along the surface of the ground and some of them have encircled the trunk of the Puriri!  Kahikatea roots often do quite interesting things, but I've never seen anything quite like this. 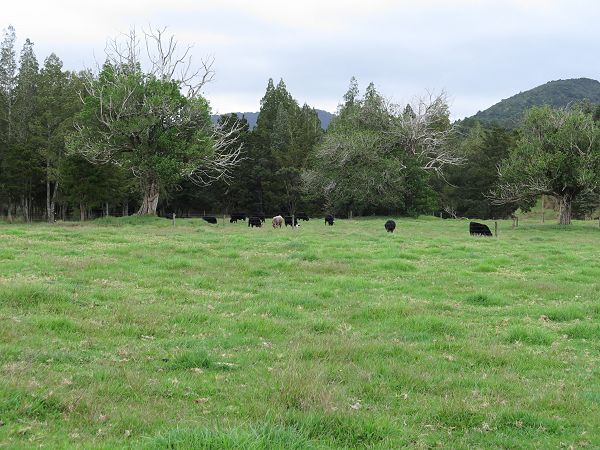 The weaned cows are now spending most of their time grazing at the other end of Flat 5 (I've been progressively opening it up for them as they eat the grass) and the calves are also moving away, now spending most of their time in Mushroom 2, even though they're still able to come back in here to meet their mothers along the fence if they want to.  This method of separation appears to be much less stressful on them all than sudden and irrevocable separation by transport to new homes.

Because I planned to wean the house cow calves from tomorrow morning, I took the five animals to the yards to weigh them this afternoon.  I left them in the driveway and went out to organise the rest of the cattle I wanted to separate this evening and then Stephan called on the radio to say that orphan 765 was in the river!  Presumably someone pushed him in but fortunately he didn't appear hurt.  Stephan went off to get his other boots, since he'd have to get in the river and get them wet and then I looked back and the steer was up on the bank and then immediately eating the (I think highly toxic) Elephant Ear plants which grow on the stream banks from bits washed down from upstream.  We moved very quickly to open a gap for him to come out of that area and I shooed him away from eating any more of the large leaves.

765 spent the next few minutes salivating and trying to spit out whatever was left in his mouth and I wondered how long he'd take to die?  Fortunately he didn't. 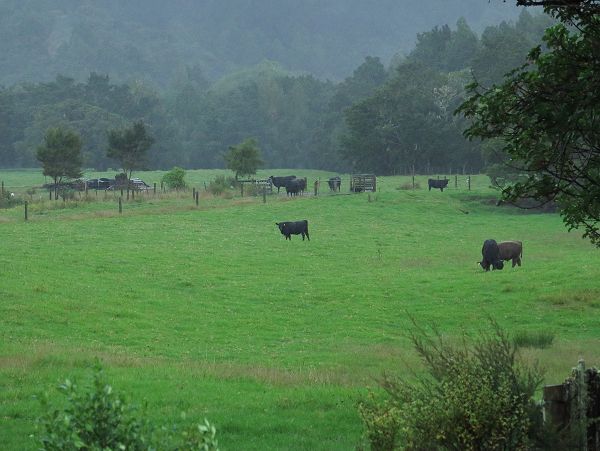 Seldom does rain fall at just the right time on a farm, but this storm came with excellent timing for us, since the fert is now on the hills and I need it to be washed off the grass and deposited on the damp soil surface.

The morning was weirdly dark because of the heavy, wet cloud cover and I felt sorry for my just-weaned calves in the House Paddock.

Don phoned me during the morning and asked if I was smiling, now the rain was falling on all that fertilizer: you bet!  The recommendation after fertilizer spreading before grazing animals on those areas again, is for a rainfall of 25mm; we got 27.5mm.  Just perfect. 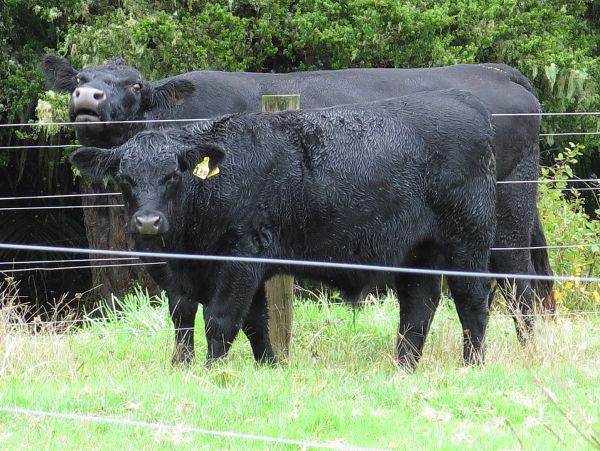 After milking this morning the house cows and calves got an unpleasant surprise: no breakfast.  We propelled Zella and Imagen along the lane before putting their calves in the House Paddock with the others. 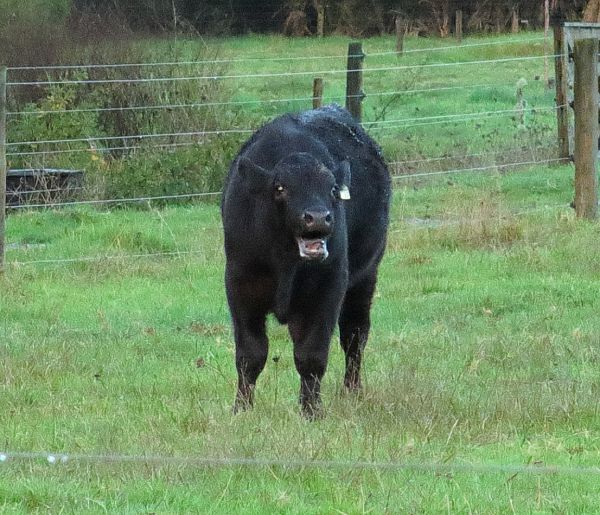 Because he doesn't have a mother to call for, or perhaps because he knows where I am, orphan 765 hasn't been staying with the others as they bawl their hungry disappointment.  He has spent most of the last 24 hours standing somewhere not far from the house, making me feel terribly guilty and sad about having suddenly stopped his milk feeds.  I wanted him to have as much as possible for as long as possible and had not gradually reduced the quantity he was having, which would have made this process much easier for him. 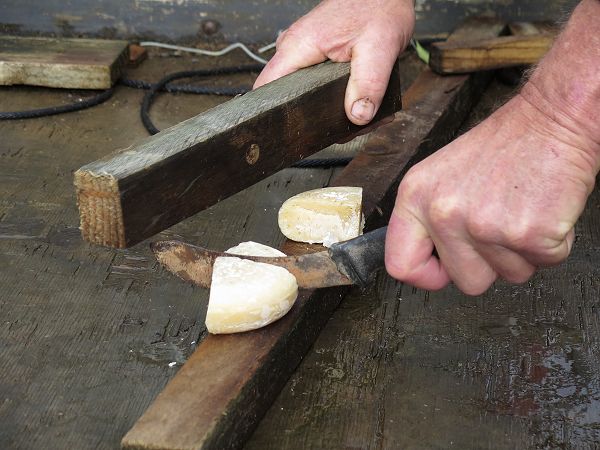 Sometimes cheese doesn't turn out as planned.  This one had to be cut with a great deal of force - and then used in the live capture traps, in case something else might be tempted to eat it. 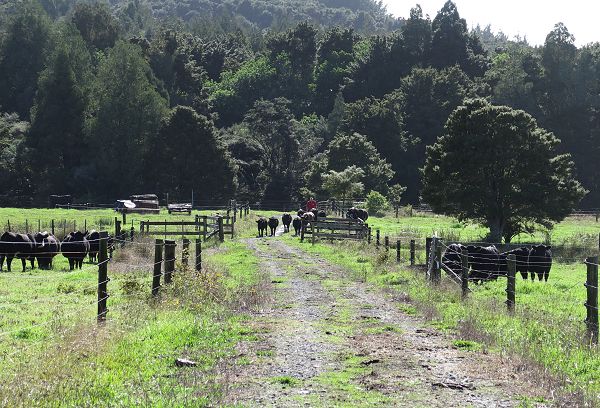 I moved the most recently weaned group of cows along to Flat 4 and then Stephan brought their calves along the lane to Flat 3.  I still wanted them to be close to each other - Zella and Imagen are at a little distance, but they will still be able to see and hear their sons across the width of Flat 2.

Over the last couple of days I've sown rye and clover seed across 5a, then let the weaned cows tread the seed in as they grazed down the pasture.  Today I mixed them with the just-weaned cows who had gone to Flat 4, then Stephan came and mowed the paddock.  This is the first year we've sowed seed and had the tractor to mow after sowing. 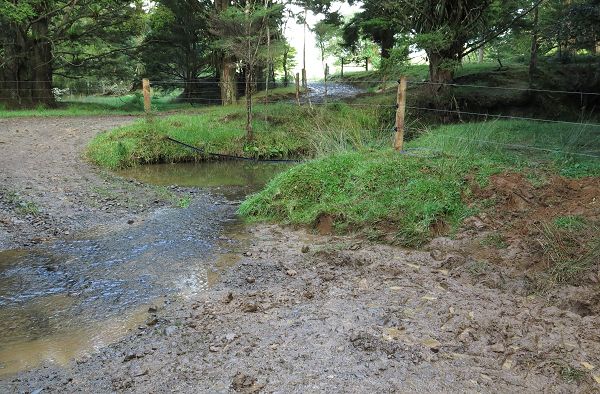 Stephan's getting along very well.  There are bits of extra work required in lots of places; here he'll knock some steel standards down through the metal for an extra one or two-wire fence to keep the cattle from treading in the little drain which carries water from the Pines to the stream - after reforming it where it's been made very untidy and muddy by the tractor working here.  (It wasn't feasible to put the fence posts in on this side of the little drain, because of the terrain, track width and the depth of the gravel.)

He'll now work on the other side of the stream where the small flat part of the Small Hill paddock runs along the opposite side of the track from the Mushroom paddocks.

I brought the cows, calves and yearlings in from the Back Barn and drafted the last seven cows away from their calves and the yearlings, who joined the other weaned calves in the Mushroom paddocks, where there's fortunately still enough grass for them all.

I went out to see if I could find some pigs this evening and spotted nine of them rooting around in the Bush Flat.  I shot one at the top end of the paddock, after following them for a while - had to be a bit careful because my seven non-breeding heifers are there.

This time I remembered to take a tissue sample from the dead pig's ear to send off in a little vial of preservative I've been carrying around for weeks, part of a research project by the Rare Breeds Society to establish the genetic origins of the feral pig populations around the country.  I wonder if they'll incidentally get some indication of the pattern of illegal pig releasing as part of that research? 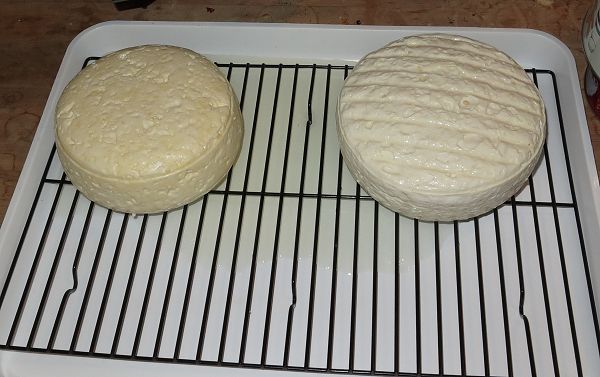 Now Zella is on twice-a-day milking, there's a lot of milk to make into cheese; so every night we're both processing milk and making it into other things, Stephan doing cheese while I make ice-cream or butter.

Friday the 1st of May 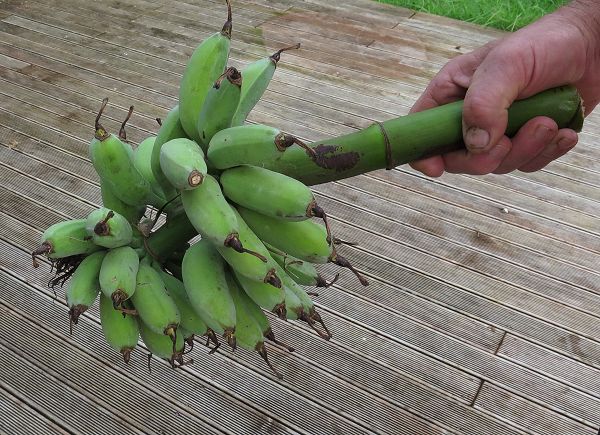 Yes we have some bananas, again.  This is the first-formed bunch from earlier in the season, which Stephan decided it was time to cut down.  There are several bunches forming.  They've had a great amount of "gross feeding" by cow manure from the little shed. 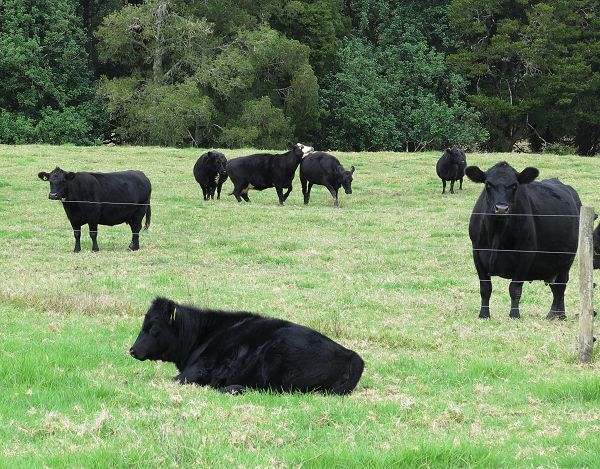 I noticed a little huddle of cows in Flat 4, the tell-tale sign of a hot cow.  This is helpful confirmation of 517's non-pregnant state, although there was little doubt with her last heat.

While they all watched me impatiently, I sowed seed across the adjacent 5b and then let them in to "hoof 'n' tooth" it in to the ground.