William and Elizabeth came out this morning for milking.  This is the sort of family I am glad to have around us.  Elizabeth brought muffins! 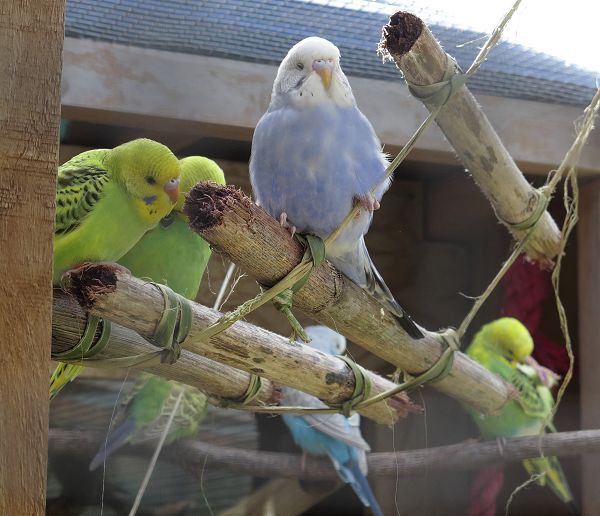 Instead of knitting socks, I've been making Budgie adventure toys.

This one is flax flower stems tied together with strips of flax.  The birds really like them and as soon as I hang them up, they're in and trying to pull them apart.  I eventually drilled holes though these stems and threaded the flax, because the birds kept pulling the loops off.

Making things out of natural materials means it doesn't matter that they attempt to eat them. 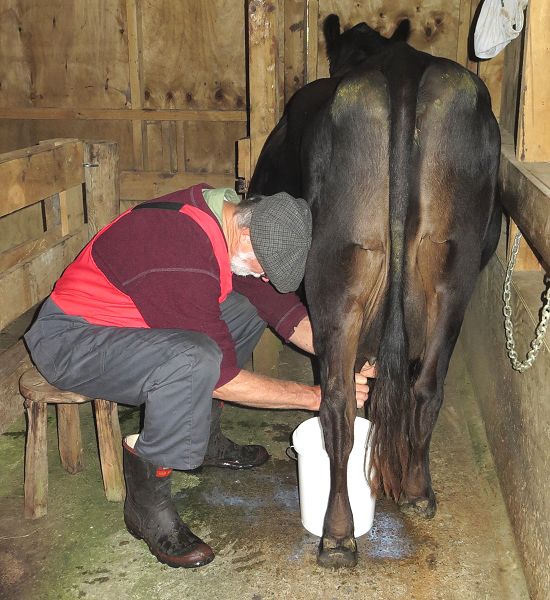 William and his friend, John, came this morning to milk Zella again.  John had a go, decided he was better at medicine than milking.  They happily took milk and ice-cream home, the latter made by me last night as a small gesture of thanks for William's help.

Zella is such a lovely animal, standing quietly for all her milkers.  I forgot to say, until the milking men hurriedly pulled the bucket out of the way on a couple of occasions, that she will not kick, was only perhaps adjusting her position for comfort.

Stephan made his way home from Whakatane, yesterday evening travelling by car to Auckland and this morning he caught a bus to Kaitaia, where I picked him up this afternoon.

As I drove toward him as he walked along the main road, he stopped and adopted the usual "pick me up" pose (it's just something we do) and I noticed a guy with his thumb out on the other side of the road watching as I swerved in to the kerb to pick Stephan up.  I wonder if he changed his own hitch-hiking stance as a result? 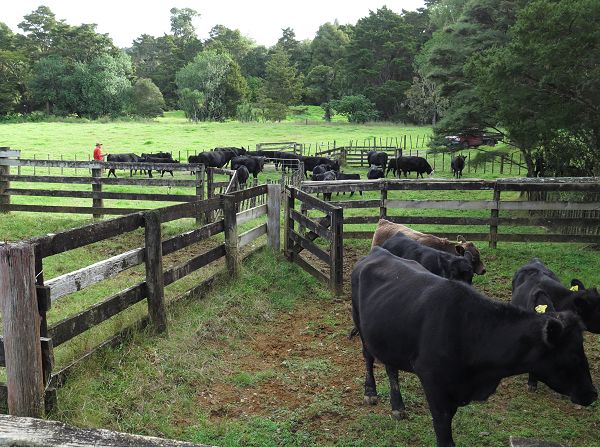 My back is still quite stiff and I'm being careful with it, so I asked Stephan to give me a hand with the cattle this afternoon and brought them all in to the yards to weigh them before beginning weaning. 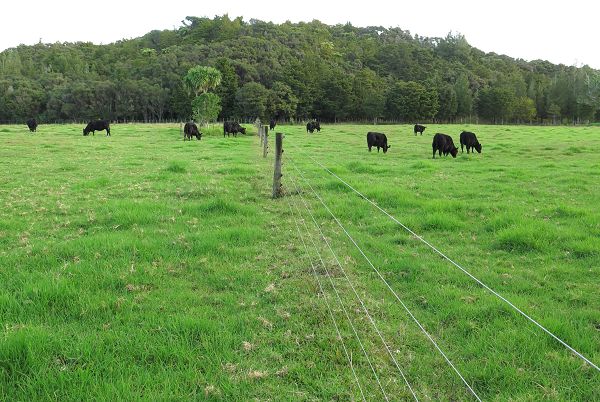 Then I drafted the first group of seven cows and their calves out of the mob and split them between Flat 5d and Mushroom 1.  It's quite a good place to wean, since it's away from our house and on the other side of the Bush Hill from our nearest neighbours.

It's also an extremely easy point at which to draft, because the cows readily walk through the gate into Flat 5 on their own and then it's easy to get the calves to go into the Mushroom.

As the rest of the mob then came up the track, I realised I should have drafted the three fat calfless cows out to the weaning mob as well, so they joined the others in 5d. 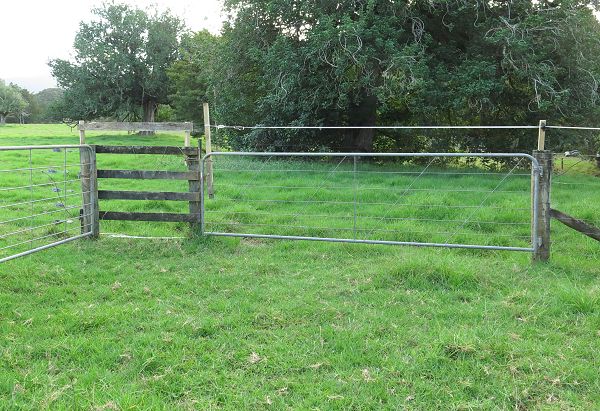 In previous years I've tied electric fencing standards and tapes above the gates, but Stephan offered to make a more permanent amendment to the main gateways I use during weaning, here and at the top of the House Paddock.

I can't remember ever having an animal go over the top of a gate during weaning, but I don't want to tempt anyone - especially since Zella went over a much higher gate early in the season, proving that an upset cow most certainly will if she sees a chance.  Having dealt with bulls which have gone over gates but won't when there's a tape in the way, this seems like a very simple preventative measure. 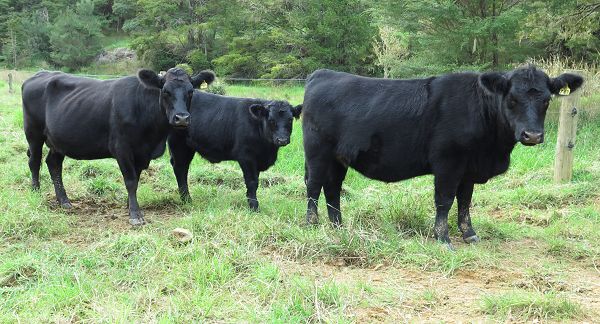 This little family is three-year-old 703 with her son 763 and daughter, 743, who surprised me by reaching mating weight this year.  Daughters of first-calving heifers don't usually do that, especially when their weaning weights weren't terribly good.  743 was only 228kg at weaning, but she'd reached 346kg by the end of December last year. 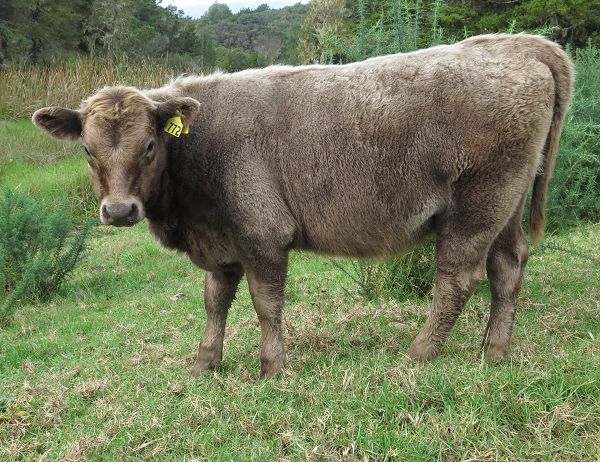 And this is Endberly's pretty daughter.  I would dearly like to have kept her, but her temperament is unacceptable.  Right from the start she's run from me whenever I've entered the paddock and I don't want to deal with that for the next several years.  She's quite good in the race, but not out in the open.

The most interesting thing about this calf is what she indicates about the rest of her family, i.e. that her mother, grandmother and great-grandmother carry/ied a colour dilution gene, of which I was entirely ignorant until this calf was born.  The other grey (I know, it's more brown) members of her family have had Hypotrichosis, giving them charcoal, fuzzy coats which have covered the colour dilution effect of this other gene.  This calf's hair is normal, but the same colour as my other grey cattle - and that gene presumably came to them from a common ancestral sire, here just before I came to the farm.

I moved the sheep and geese this afternoon - Madam Goose went with the sheep as usual, but I had to go back and make the two youngsters go up to what used to be the Chickens paddock, where the pigs most recently lived.  The young geese took some convincing to stay there and did not seem very happy, but I figured out how to shut the gates without gaps and there they stayed.

We went to a Dairy Women's Network meeting today - it seemed I was the only one who'd read the bit in the email saying partners were welcome - to find out how some upcoming changes to safety regulations might affect us.  There's been a lot of chatter in the news lately about it, with some very alarmed reaction from farming groups.  I think it was a helpful meeting, although it was a presentation from a particular business entity which contracts to farmers to help them manage their health and safety systems, so not entirely 'pure' information. 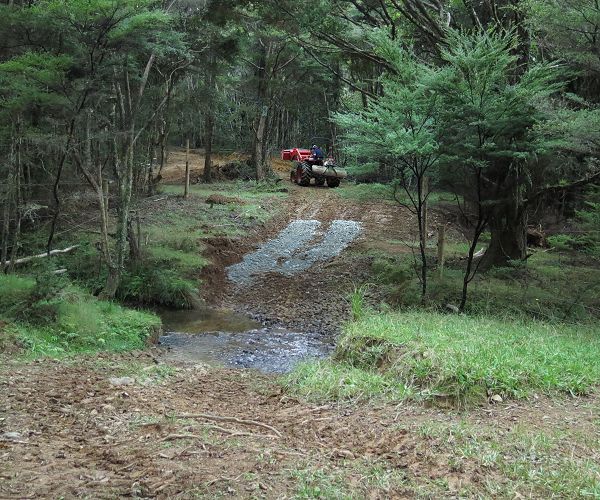 I suggested to Stephan that it might be very helpful to spread some metal on the slippery track up into the eastern end of the Swamp East paddock, to increase the likelihood of the fertilizer truck getting up there.  The ground conditions in the paddocks are still good, but the clay tracks in shady places tend to be a bit slippery, once we've had a bit of rain.

He came back suggesting we look at buying a tipping trailer, because there are lots of little tracks we could improve, where we'll never get a big truck in to spread metal and doing it by hand is hard work. 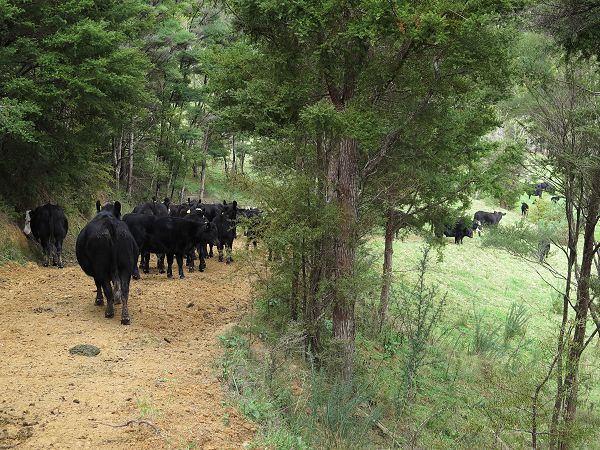 I walked up into the Big Back North paddock and then down the track again behind all the cows and calves, to bring them in so I could draft the next weaning group.

I led them along the lane toward the front of the farm, hoping to draft those I wanted ahead of me, but there are too many headstrong individuals in my herd and in the end I had to wait until we reached a gateway and do the drafting there.

I took seven pairs and fat 728 out and added them to the previously weaned groups and the rest of the mob, now 31 in number, went out to the PW.

Then it rained!  I had one of those pointless moments of shaking my fist at the clouds and shouting at the rain to please stop.  I very carefully organised for my fertilizer to be brought up and applied this week and it was supposed to have been spread this afternoon and would have been on by now if all had gone to plan.  Apparently there's some sudden shortage of RPR and so I can't have it.

Fortunately the rain did not last terribly long, only totalling a little over 5mm in the gauge but it will make the tracks slippery.

My collection of weaners will keep growing.  It's lovely having lots of grass around for them and this, the Mushroom 1 paddock, is always a good place to have them start.  I'll open Mushroom 2 and then 3 over the next few days which will both provide more food and allow them to drift further away from their mothers. 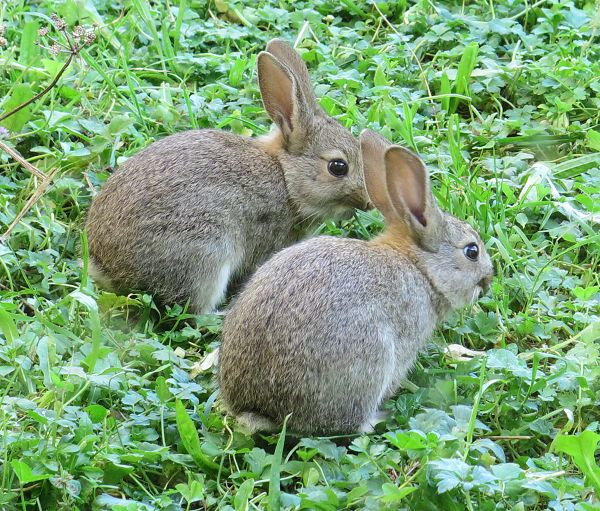 New lawn rabbits.  These two have appeared on the back lawn, from under the big flax bushes.  The window-sill in my office is at knee level, so as I sit here working, I look down at the grass very near the house where these two had come to feed.