The week beginning the 7th of November 2015.
Saturday the 7th

I spent the day with the Exam Centre Manager at the College, sorting exam papers, creating seating plans, supervisor rolls and so on.  She bought me a lovely lunch.

This evening we separated Zella's and Imagen's calves from them for the first time overnight.  Zella's calf has been feeling unwell and we suspect he's drinking too much!  As always, Imagen's calf can put up with the separation too, since her mother's milk is being harvested for the pigs.  It's an unusual treatment for a pedigree calf, but Imagen's progeny don't appear to suffer for it.  When we milked Imagen as the house-cow, she'd often produce 14 litres of milk in a day, as well as feeding a calf.  Without our interference, her production would adjust to the needs of her calf alone, but she's easily capable of producing for calf and pigs and the calf's access is only interrupted for half the time.  The calves adjust to taking their last evening feed before we separate them rather than at 11pm, when they often feed.  Their mothers are generally nearby, so once accustomed to the new regime, they quietly do their own thing during the night hours.

I threw out some cream.  Every year the days pass by in such a hurry and I don't get around to making butter, so the cream goes to the pigs ...  Sometimes I think I should just not bother putting it into clean containers in the fridge in the interim.  Occasionally I put it into the freezer when I know I'll be busy, so I can get it out when I do have some butter-making time. 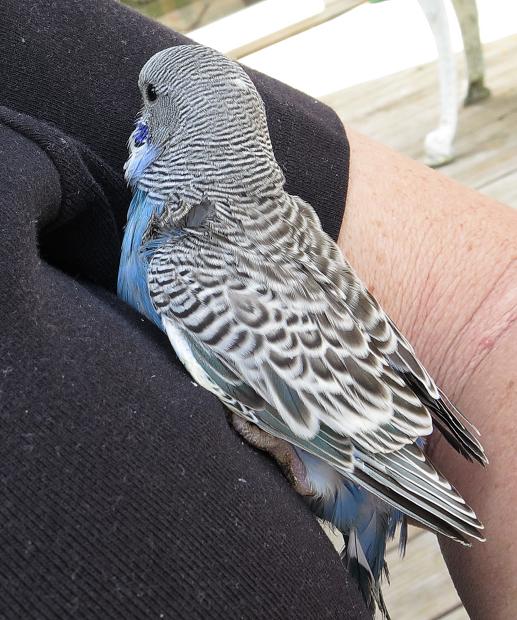 This looks like a budgie!  I was cleaning out the nest box for the babies and this one climbed up my jacket. 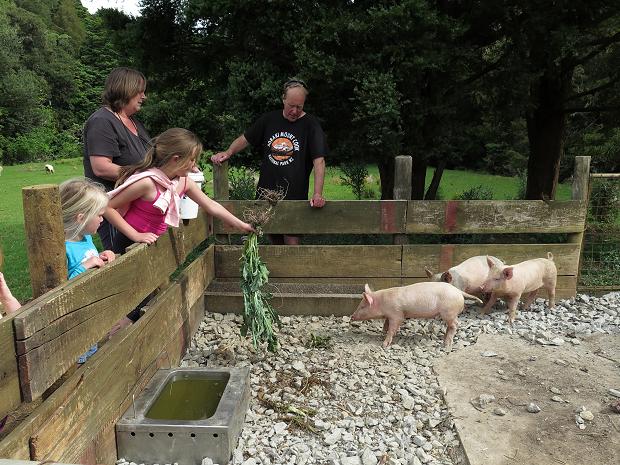 Stephan's cousin Doug and his eldest, Nicola, came out to visit and stay for the night, bringing sister Christina and a collection of children who were all thrilled to see the pigs.

Emma claimed the pinkest pig as theirs (we're all involved in rearing them for pork) and named him Wilbur.  "I want to eat that pig!"  Astonishing. 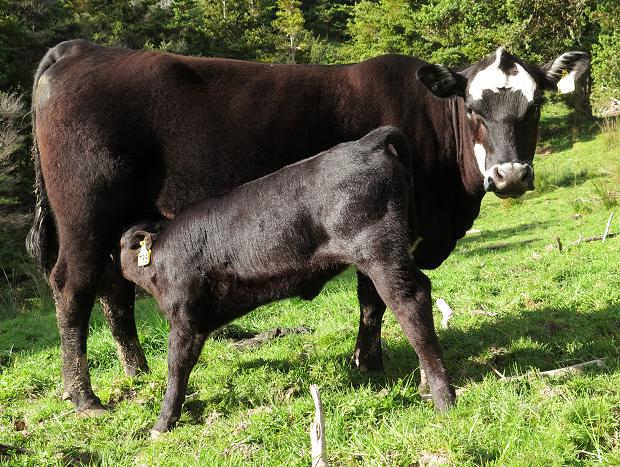 I went off out the back for my daily cattle check on my own, while the rest of the party went for a more moderate walk around the flats.

Two-year-old 749 and her nice little heifer.  I'll be surprised if she doesn't rear this calf very well.

Back to school, pretending to be the ECM again, since Kiri (whose job it is really) was run off her feet with the usual collection of last-minute questions and organisation.  She calls me her fairy godmother; it's nice to be both helpful and appreciated. 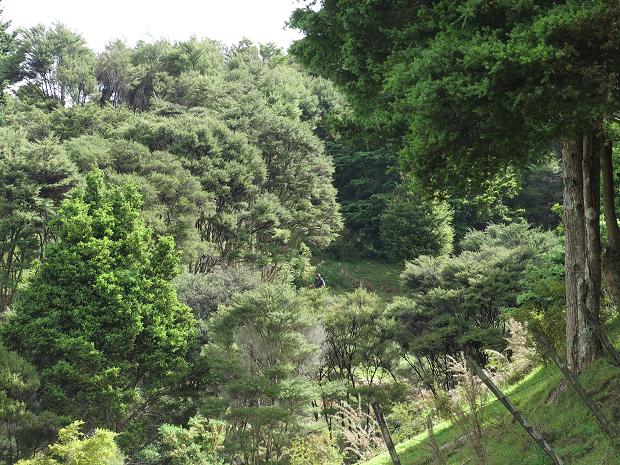 Stephan was determined to get out and cut some scrub; today on the slopes of the Pines paddock.  He's there in the middle of the picture, if you look carefully.

After it had gently rained for most of the day, the air was very hot and humid. 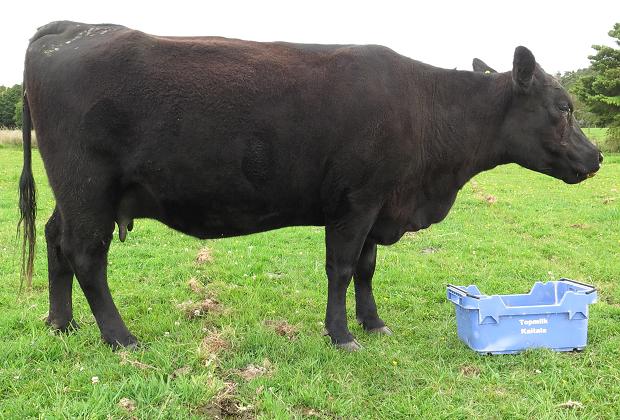 I look at 729 a couple of times a day, feel her udder for tightness, wonder about her ...

She looks rather thin in this picture.  She has lost some condition over the last couple of months of reduced feed, but she'll come right again when it starts growing.

Her tail-head appears higher than it was, indicating changes in her pelvic region in preparation for calving, but I doubt she'll do it within the next couple of days.  Today is her 278th day of gestation.

I've been moving the second mob of cows and calves around the flats so that by today they'd be easy to take in to the yards for weighing and tagging.  Then when we brought the house cows in, we took them across the bridge to the yards too and did their two calves.  Only 710's backward son and 729's still-expected calf remain to be done. 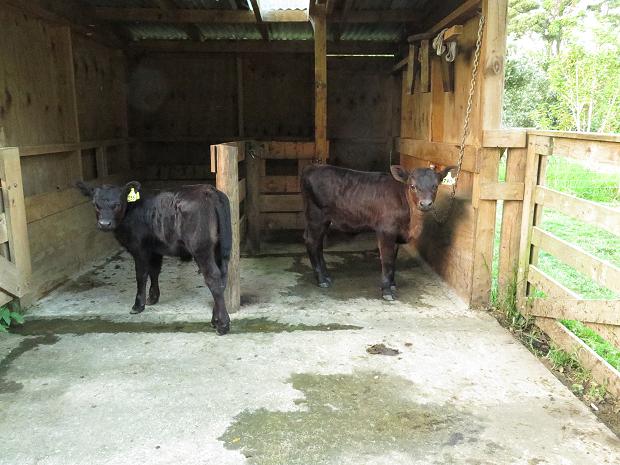 This is where Zella's and Imagen's calves spend their nights.  In a few days, when they've become used to the nightly separation and we're sure they'll respect the electric fence, they'll stay out in the little paddock instead. 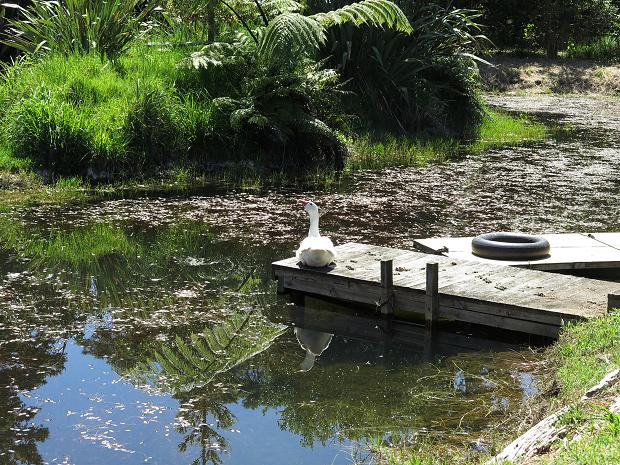 Mr Goose spends a lot of time sitting on the jetty, waiting for his young companion to come off her nest and leaving unpleasant evidence of his occupation.  The rest of the time he patrols around, aggressively running at anyone he considers a threat.  His days are dwindling in number. 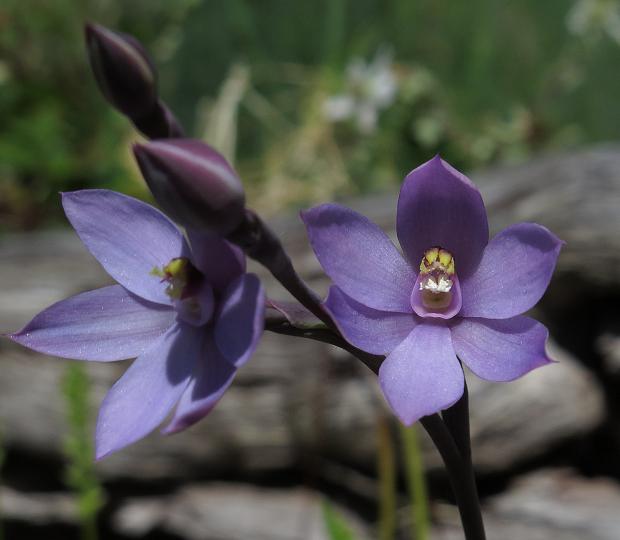 The lovely orchids on the Puriri trunk are out in the warm sunshine. 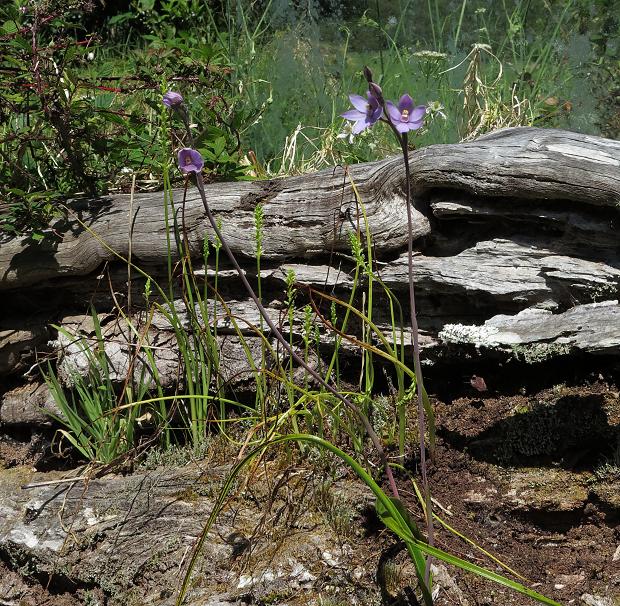 But this year there are only two plants.  I have no idea why their number has so diminished.  I hope they're not going to disappear entirely. 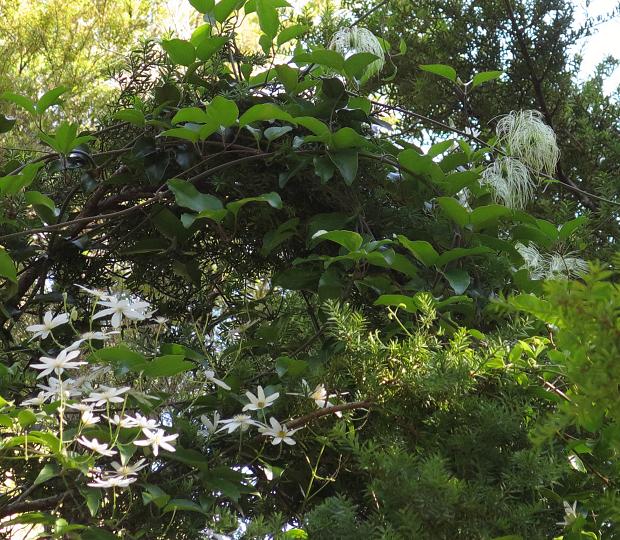 This puzzles me: either the Clematis vine near the Back Barn gateway has flowers of differing maturity and some have already turned to seed, or there are actually two vines in the tree, one of each sex.  I thought the flowers I could see looked like male ones, but only the female vines produce the feathery seed heads. 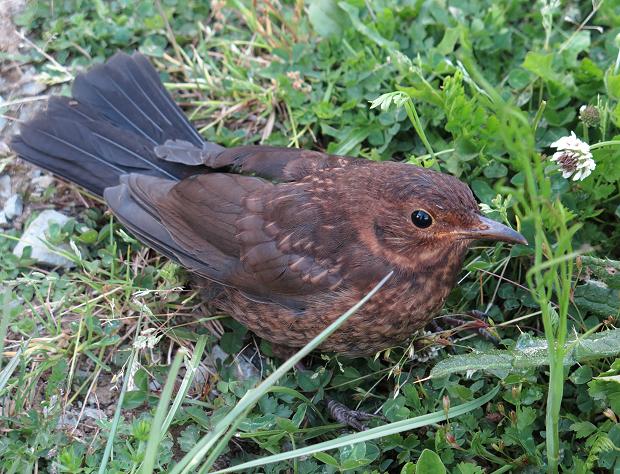 I nearly ran over this little bird, a baby Blackbird I think, sitting in the middle of the track.  It seemed very unwell, so I put it to the side in the shelter of some longer grass. 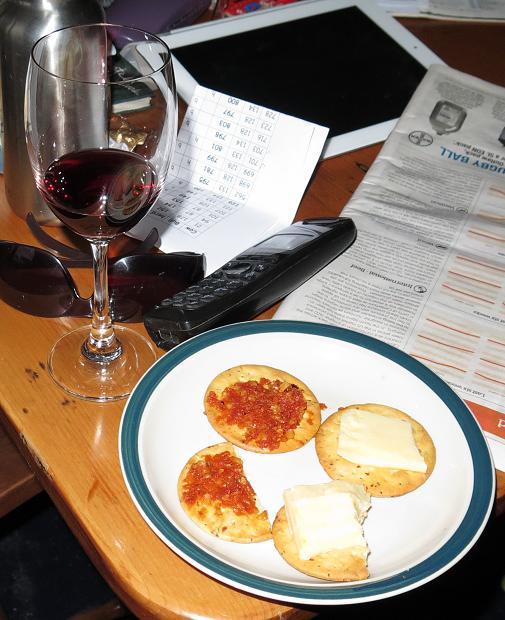 While I was refreshing the food and water for the budgies, wine and cheese appeared on the table for me.  How lovely.  You can still get good staff. 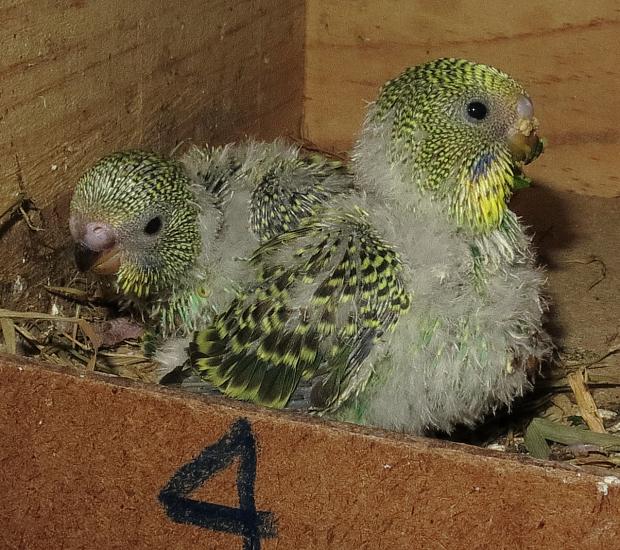 Different coloured budgie chicks, these are the chicks of the young mauve female and a grey-green male. 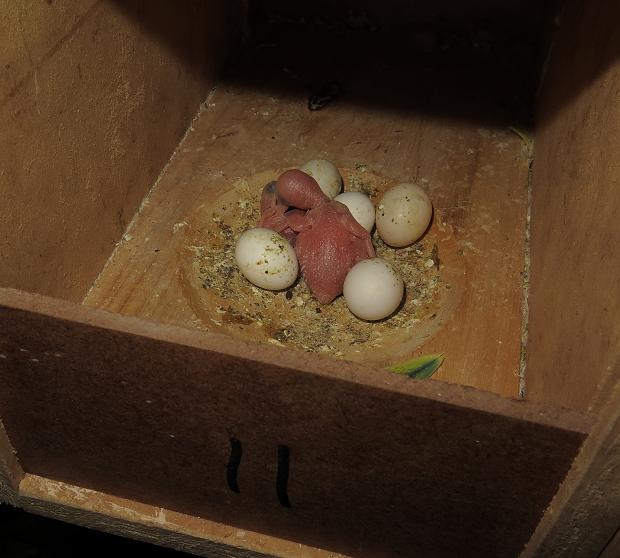 And more chicks!  They must be contented birds, I think, to be reproducing so well.  What am I going to do with them all? 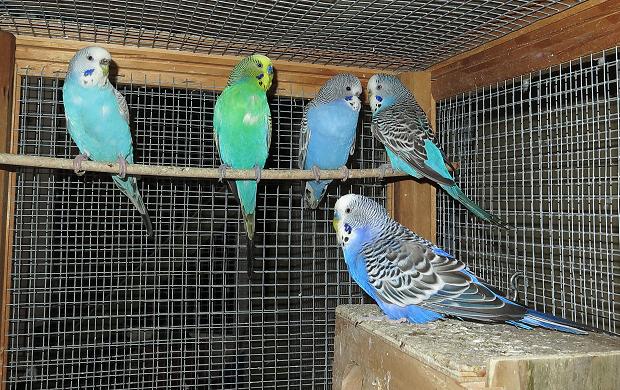 The first of Loofah's babies is out of the nest box and sitting up on the perch with its mother.  This is such fun!