We got the sheep in this morning and Stephan turned each of them over to check and trim their feet.  A few have been a bit sore recently and so we sprayed some iodine on a few cases of fungal foot-scald, which will quickly relieve their discomfort.

I took lots of photos for a column I've written on the basics of sheep husbandry.

Watching still-pregnant 729 this afternoon, I wondered if she was at last showing signs of labour and moved her and her companion, 710, to the top of the House Paddock for easier observation. 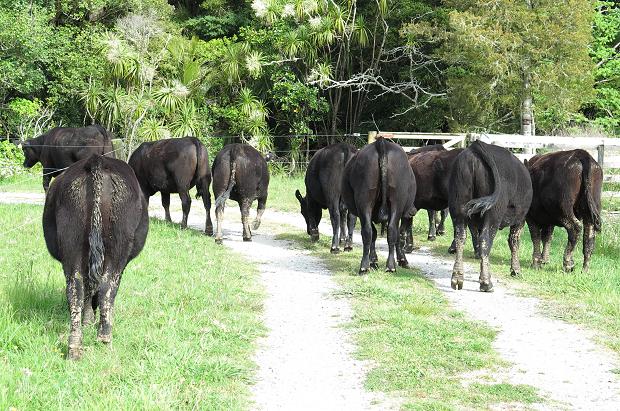 We brought the heifers in to the yards to weigh them and I applied some pour-on drench to a few of the smaller ones since the weather is so lovely and fine.

Their average weight was 295kg, ranging between 266 and 324kg.  On average they should reach my mating minimum of 330kg.  We'll find out how many really do in about five weeks. 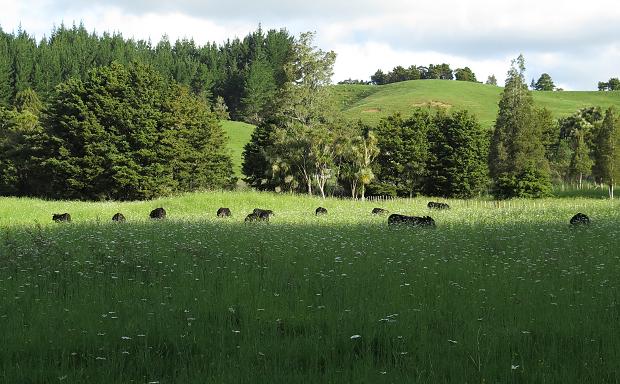 Then we took them along the lanes, across Flat 4 and down across the stream to the Road Flat (orchard) paddock, where they almost disappeared in the long grass.

The Parsley Dropwort plants will still be a tasty treat, despite there being some flowers (those pesky white ones) blooming.  The stems are still soft enough to eat at this stage, although they'll harden up within a few days. 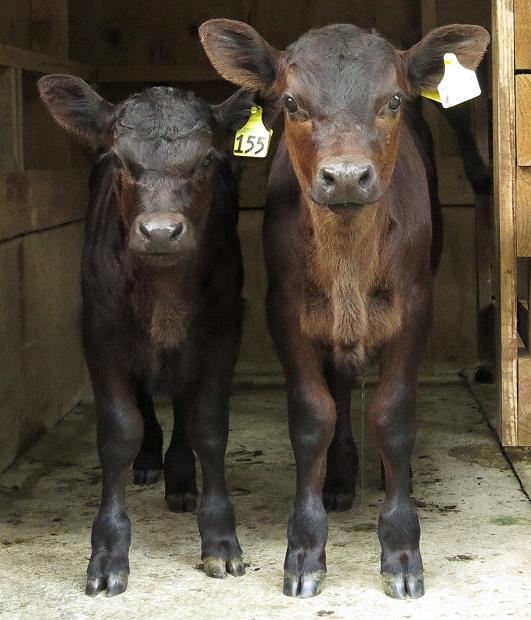 Imagen's daughter and Zella's son, who Stephan is calling Zeb, short for Zella boy.  I haven't begun to think of names for those heifers who'll have them.

729 was agitated this evening so when I went out to check on her just before ten, I was not surprised to see her in labour - lying down, getting up, sniffing the ground, etc.
Forty minutes later I could see feet and while I watched through binoculars, hoping to see some definite movement by the calf to indicate life, it poked its tongue out, feeling around for whatever was out there in the unknown world.  I don't think I've ever seen one do that before; usually the tongue, the next thing visible after the feet, is still and lying out one side of a calf's mouth, although if touched it will often respond with movement.  It was a very funny thing to see.

Because of my concerns about 729's earlier strange paralysis, I stepped in and gave her some help as soon as the head was out, just to ensure there was no unnecessary delay in the calf's birth.  Then leaving 729 cleaning her steaming heifer calf, I went off to bed. 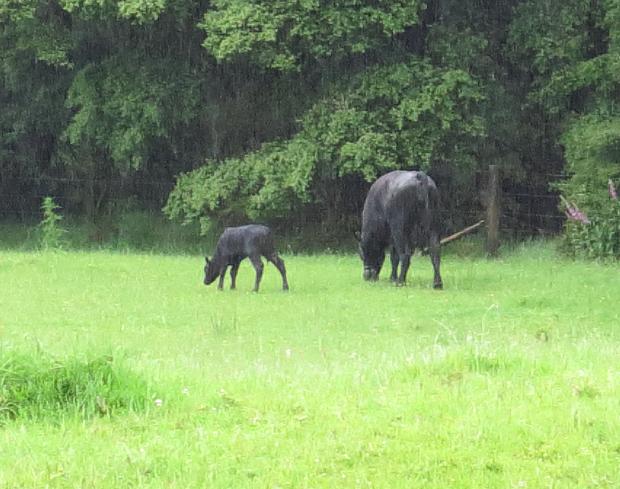 In this morning's drizzle, cow and calf were up and moving around.

As I reached the house, I turned to look back at them again and saw the calf getting up from the ground with the other cow, 710, turning away after bowling her over.  She repeatedly attacked the calf whenever it wandered near her.  I decided I'd better go back out and try and separate the two pairs as much as I could, so the little heifer didn't get too beaten up and forget where to go for breakfast!

I suppose 710 is used to her calf being the only small animal in the paddock with them and consequently saw the new calf as a threat.  Who knows what goes on in their heads? 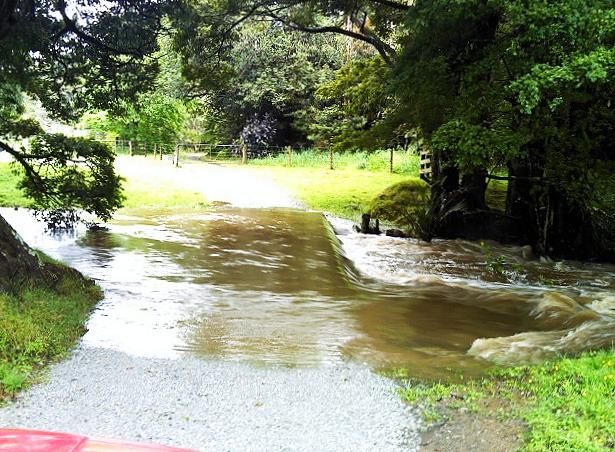 I spent the day in town supervising exams again but was in the end not needed in the late afternoon, so came home - except I couldn't get in!  This is the result of 67mm of rain over a few hours.  I sat, listening to the radio, knitting a sock, wondering if Stephan would notice and bring me a cup of tea.  I could have waded across, but I wasn't really in a big hurry and only had to wait about half an hour before driving through about four inches of water.

We're both a bit cautious about driving through water, knowing far too many people who have done so and wrecked their vehicles (oh but it's o.k., they had insurance ... yeah, right, we all pay for that!) and there are too many stories of people getting into fatal difficulties when something unexpected happens. 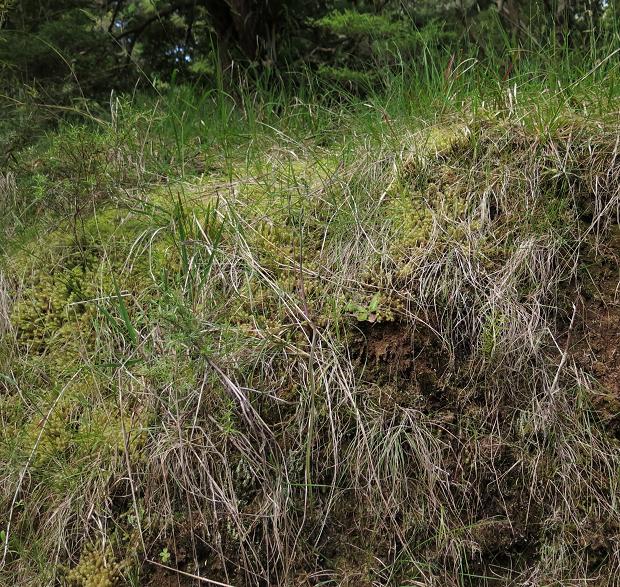 There's nothing much here, right?

This is the clay bank on the other side of the first river crossing (with the Pines and PW just beyond) which is now behind a fence so the cattle can no longer access the area.  I peered at it the other day, checking for Sun Orchids, because this is just the sort of place they grow and yes, there are two plants! 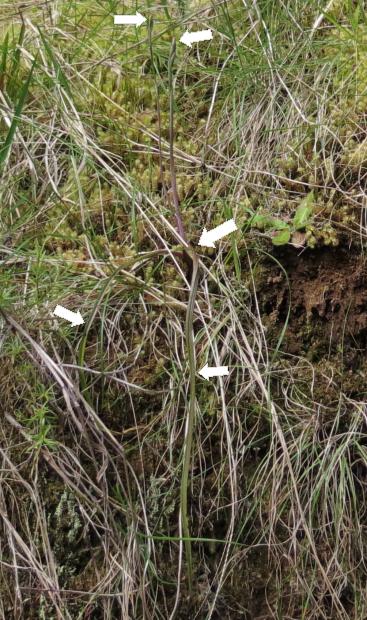 This is a clip from the photo above.  The top arrows indicate the flower buds, the middle arrow the bases of the two plants, growing very close together and the lower arrows point to each plant's single long leaf.

They are pretty hard to see, even in the flesh. 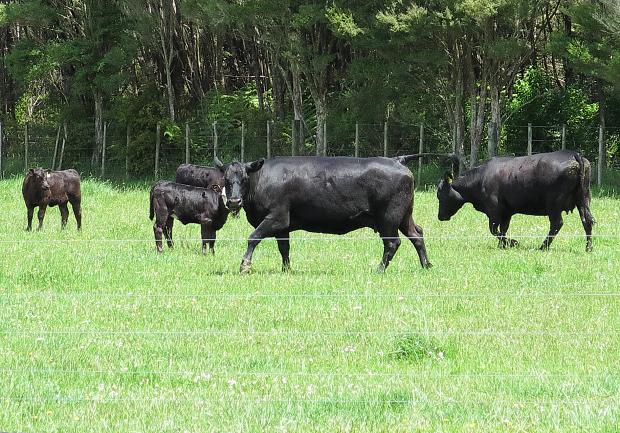 I had just moved the mob of 15 cows and their calves and was watching them contentedly munching, when 606 suddenly dashed back across the paddock with her tail straight up in the air.  I'm fairly sure this was a characteristic reaction to a bee sting.  Nobody else was at all bothered by her alarm, so I think it was something only she knew about.

By the time I snapped her picture, she'd lowered her tail a little, but kept on moving away from where she'd been stung.

The first time I noticed this particular reaction was when some heifers went a little too close to some bee hives. 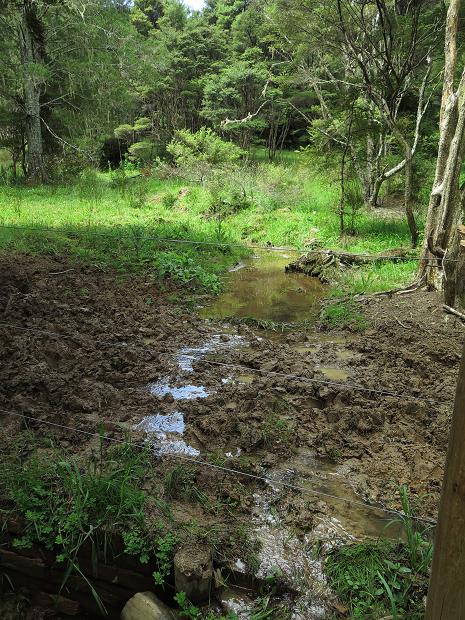 The other mob are in the Swamp East paddock, where two of the new culverts had become blocked, probably when the recent rain storm brought debris down from the hills.

I like the look of this calf.  She is starting to stand out amongst the others, looking well-grown, beautifully shaped and obviously has a bit of curiosity, which is far better than wanting to dash away from me.

149 is Queenly 107's daughter, who had a similar attitude when she was young - I always remember this particular pose, which she often adopted.

The primary question hanging over her is, did she get lucky with the 50/50 chance of inheriting the AM gene her sire carried?  He ended up siring seven calves, the bulls will be castrated (none being from pedigree cows) and the three heifers will need some tail hairs sent away for testing to find out if they're carriers or not.  The other two are Demelza's and Gem's daughters.

This is a charming pile of death being regularly added to by Stephan.  The trap is a Steve Allen Feral Cat Trap, baited with peanut butter.  It's getting a bit stinky around here.

Traps work really well when they're up off the ground like that - possums are terribly curious - and must be elevated where there may be Kiwi. 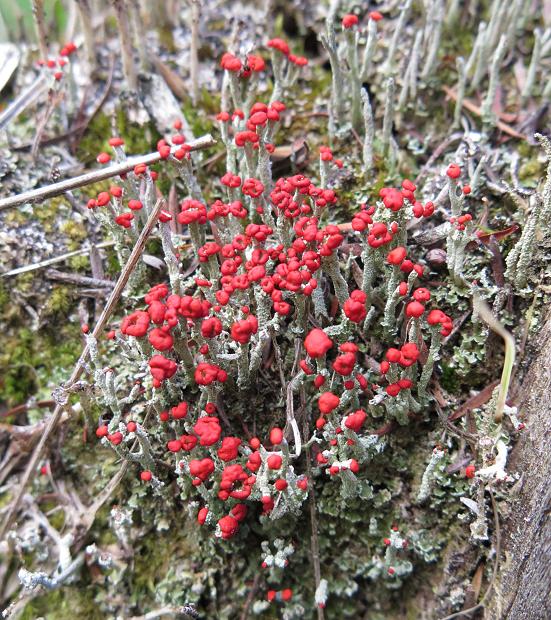 I was checking for orchids in the Swamp paddock and getting frustrated by not being able to see properly, so took lots of macro photos of things so I could look at them later on the computer screen. 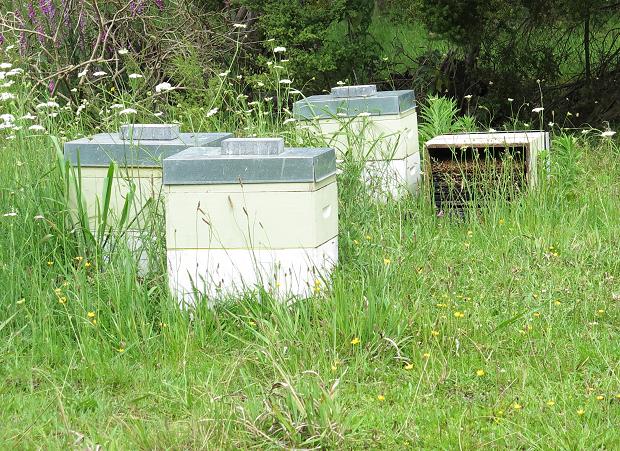 Jonny tells me this doesn't happen often, that cattle generally leave his beehives alone; but someone has tipped this one over.  The bees were still all buzzing around and I could see lots of them on the frames inside.  I sent a message to Jonny who came later in the day and righted the hive and placed them slightly differently so they'd be less prone to going over if the heifers investigated again. 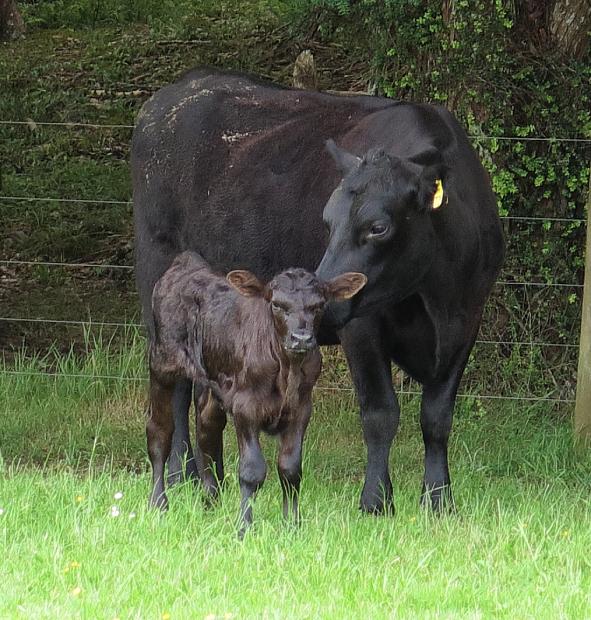 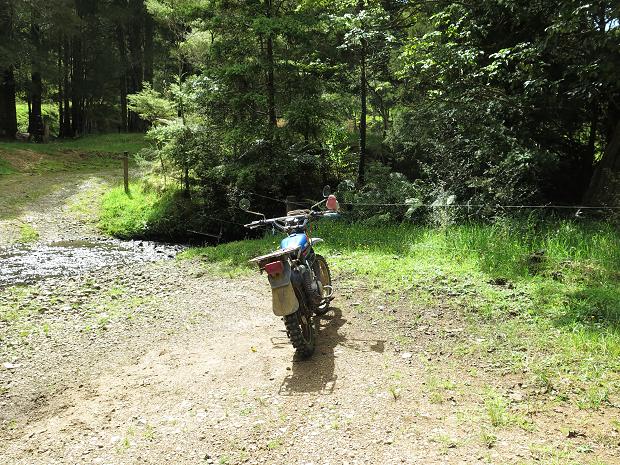 I took Floss for an outing.  She sat on my shoulder as I rode along the track, fairly slowly, because I didn't want her to fall off.

We jumped over the stream several times, Floss only falling in once, climbed through fences and walked around to watch what Stephan was doing. 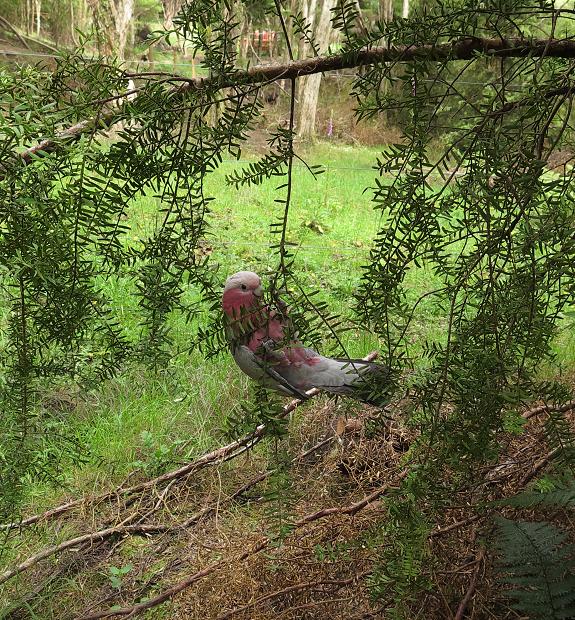 She had one of those moments I remember seeing in silly Western movies, where the rider of a horse doesn't notice a low branch and ends up suspended in a tree as the horse continues on.  I ducked to go under this bit of Totara and then realised I no longer had a Floss. 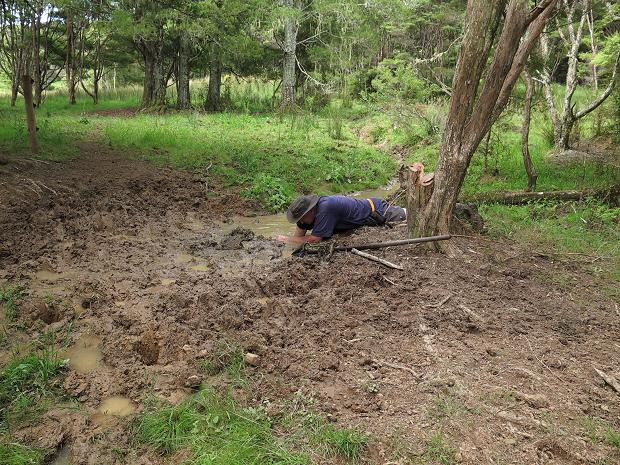 Stephan, after digging away with a shovel for a while, had to get down and dirty to drag some branches and bits of debris out of the top end of this blocked culvert.

This morning for breakfast I had whole-oat porridge made with milk which was less than an hour out of the cow!  Delicious.

A few minutes after he begins milking, I take a large bowl down to the shed into which Stephan pours the first of the milk from the bucket, to make enough room for the rest.  The cream seems to come more from the later milk, so if there's going to be too much (which then goes to the pigs or to cheese-making), best it's from the earlier part of milking. 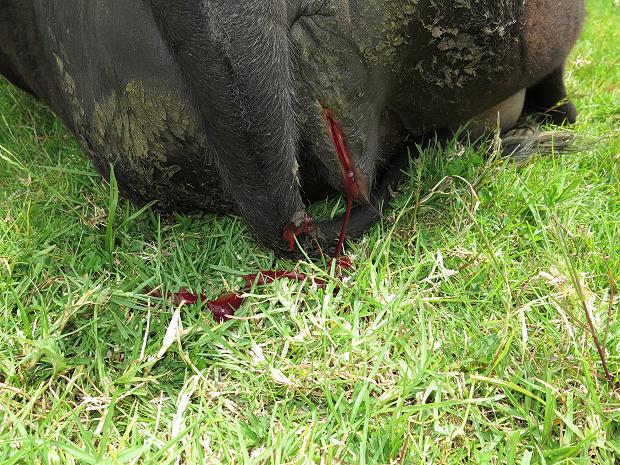 Not still eating your breakfast, were you?  This is the usual sort of lochia discharge from the cows for a week or two after calving.  When there's a lot of it like this, I usually grab a bit and sniff it, to check for infection.  Usually it has almost no smell at all.  This is 729, five days since calving.

As someone who has not had children, I find these processes fascinating, observing how the mammalian body restores itself to normal after the miraculous production of new life from within.