I wonder if whomever ate this still felt well?  These fairytale toadstools have been coming up around the Oak tree out at the yards for a few years now. 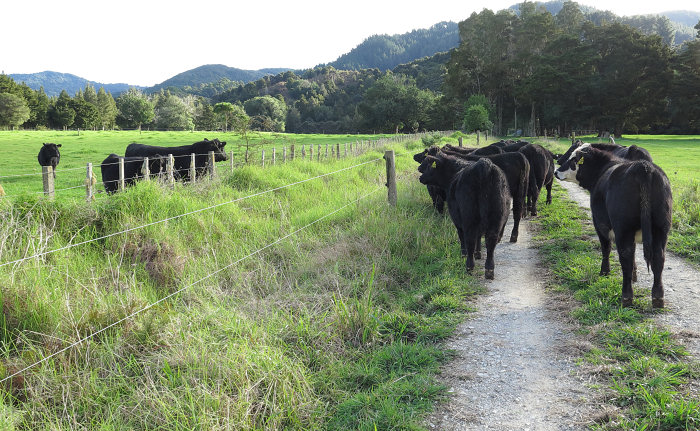 We brought the yearlings back from Over the Road so they could graze the new grass in the Mushroom 1 for the first time.  They were very interested in the bulls as they passed them.  Not yet, little heifers!

I decided to let them lightly graze the whole paddock, rather than break-feeding with electric tape. 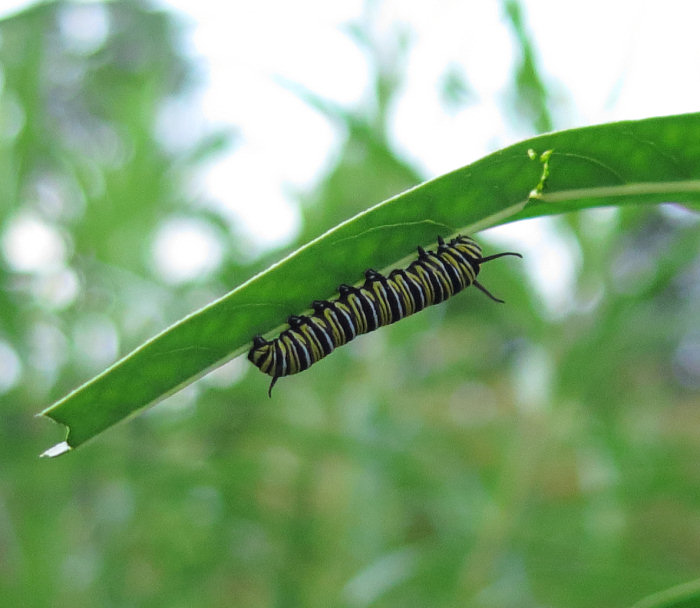 There are a few caterpillars on the swan plants again.  It's way too late in the season for them to survive, I think. 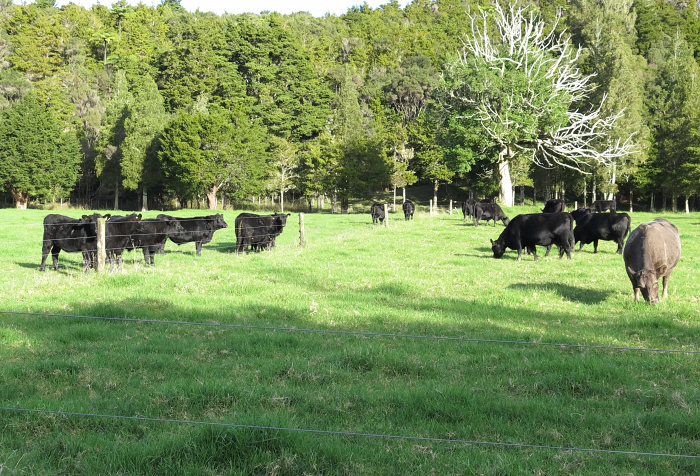 The calves in Mushroom 1 came to greet their mothers as they came in to graze Mushroom 2.

Stephan spent several hours today out cutting scrub for firewood, with Alan from down the road.  The weather continues fine and cold, very good conditions for doing some hard physical work.

Today was TB test day.  We're supposed to be back on three-yearly surveillance testing but for some reason this test has come up only two years since the last one.  I rang OSPRI, who run the whole scheme and they said it was too difficult to reprogramme and if I'd kindly just present my herd for this test, we'd be back to normal afterwards.

The annual test requirement had been instituted because we're within 10km of a herd which had some TB-infected cattle about three years ago.  It's all rather frustrating; such herds are invariably dairy, into and from which cows are regularly transferred from and to other parts of the country where TB is still a problem.  Conceivably one of the neighbours could have bought an infected calf from the affected herd and thus my cattle could be at risk of infection but it seems pretty unlikely, with our attention to keeping our cattle separated from the neighbours.  Fortunately the local possum population is not infected because they would become the primary vector of the disease if any of them picked it up. 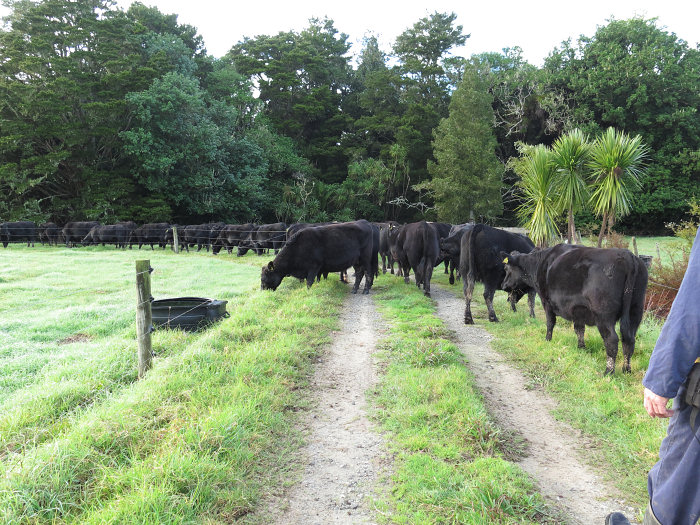 I went out and fetched the cow mob while Stephan finished milking and taking Zella and Imagen to the yards and then he joined me and took my place behind the cows while I let the heifers out of their paddock to follow us down along the lanes. 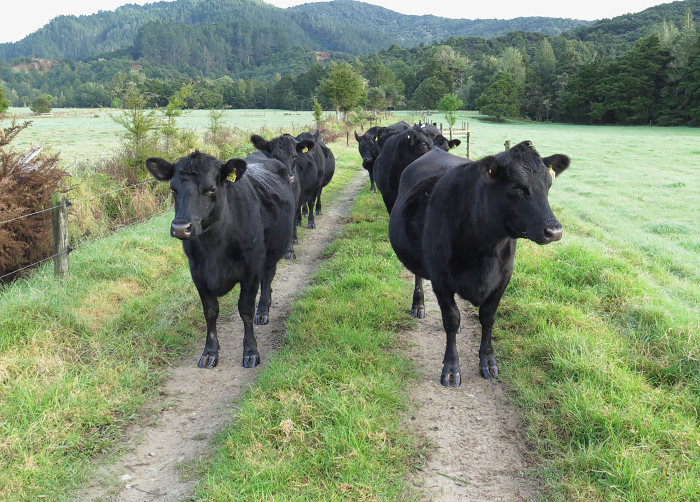 The polite heifers weren't too pushy about getting past us and in amongst the cows.

I had to plan where everyone would wait and then how we'd process them through the race area and out again to make it all run smoothly.  While Annie was here doing the test, she also gave most of them a 7in1 booster shot to ensure they maintain their immunity to Leptospirosis.  We'll do the rest of them on Thursday when she comes back to read the test. 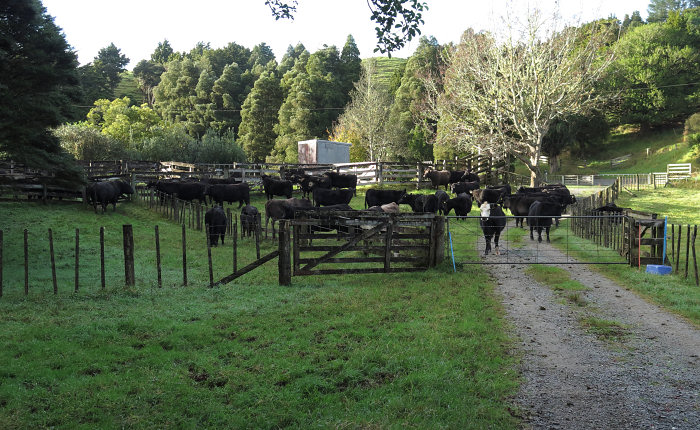 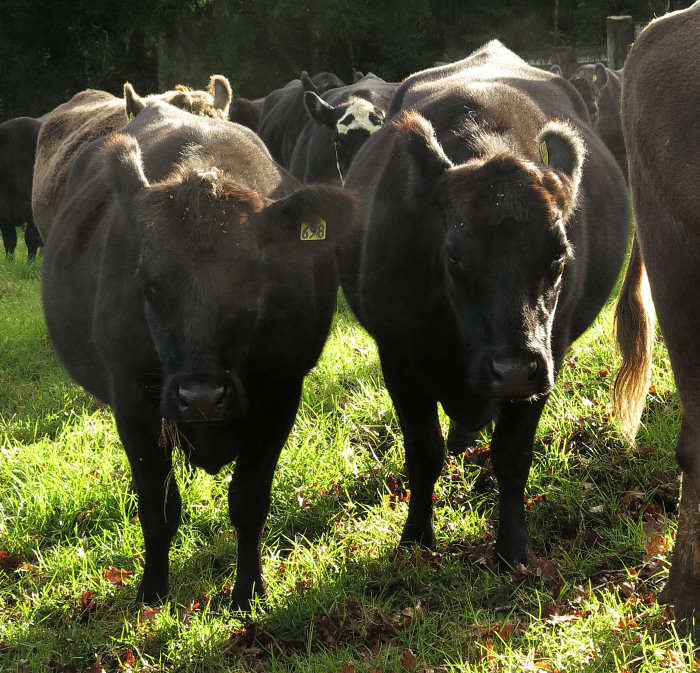 The twins (who seemed far less concerned about being separated during weaning, with their different-aged calves, than I expected), still frequently appear together. 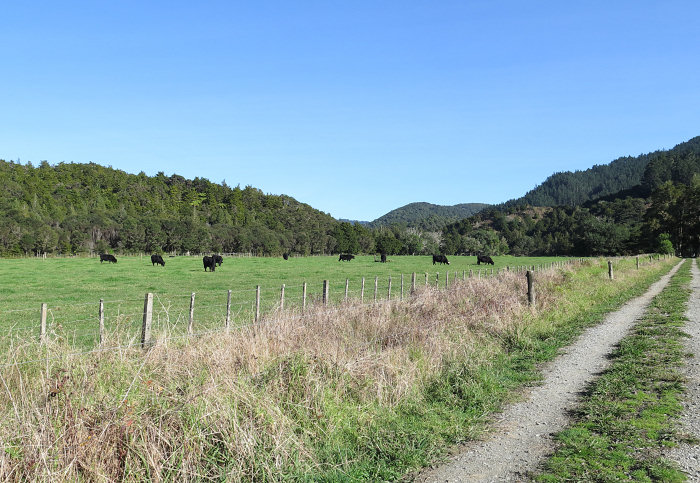 With the test done, everyone went back out to graze, all with a view to bringing them back in again on Thursday morning for the test reading.

The day was crystal-clear, a real stunner.  We often have weather like this in the middle of winter and it's a gloriously uplifting thing. 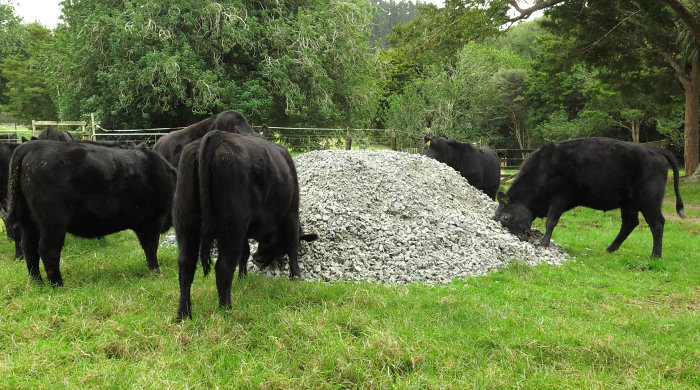 Stephan had this pile of lime rock delivered when I was away getting my eyes done and it's been an entertaining obstacle to pass ever since.  The cows absolutely love rubbing their heads and faces in the loose rock and are quite difficult to move on from here.  They rub and burrow and pounce around and up the pile.

These are the pregnant heifers, about to turn right into the top of the Windmill paddock.

In the kitchen this morning were five large pots either in the process of, or awaiting washing after, making Plum Sauce, Marmalade, stewing up bacon bones and making cheese, some of which was in the press overnight.  Yesterday was stormy and unpleasant outside and Stephan stayed in, being industrious! 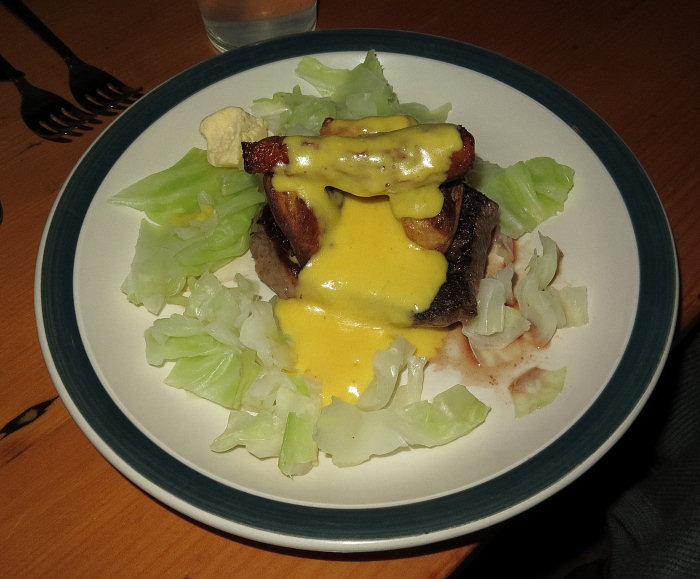 This is not an attempt to join some social media craze of photographing food but when this meal arrived, I couldn't miss the opportunity: Stephan is getting pretty swanky in his presentation!  A "stack", no less.  Medium-rare sirloin with roasted vegetables and Béarnaise sauce, on steamed cabbage with a knob of our own butter.  We don't half eat well.

I really hoped it wouldn't rain this morning for the TB test reading and, other than a short light shower, it didn't.  Apart from the discomfort of working in the rain, I wanted the cattle to be reasonably dry so those who still needed vaccinations could have them. 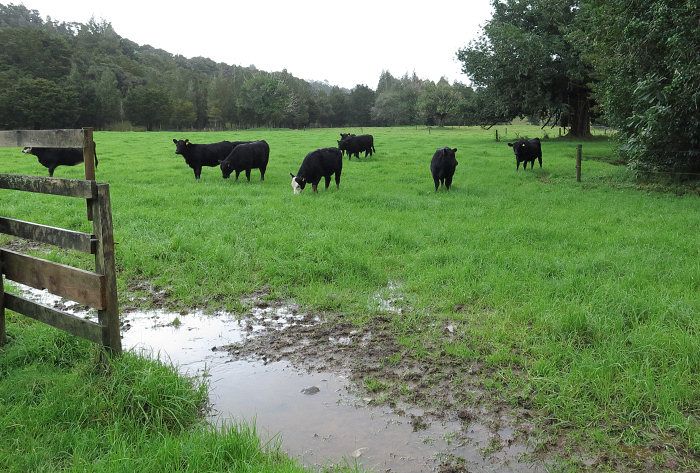 Everyone had to go in to the yards this morning, either for the test or the 7in1 vaccination.  The yearlings weren't required to be tested so they hadn't gone in on Monday.

After Annie left, having completed our clear test reading, I looked at the cows still standing in the yards and realised that as they'd actually had no treatment today I could give them a copper injection, rather than waiting until tomorrow.  Then they went straight Over the Road into a paddock with loads of feed, where they'll stay for a couple of weeks.

I have been delightedly watching the growth of this box of yellow in the aviary.  I wasn't sure if the birds could successfully raise this clutch of chicks once the weather started getting cold but they've done an excellent job.  There is an intermediate-sized chick under them all at the back.

There are four chicks of the two parent birds and the two yellow chicks are of another pair, which I didn't want to have rear them themselves, since the hen was looking a little stressed after rearing her last clutch.  Inevitably they begin laying eggs again before the chicks are out of the nest box so I collected that hen's eggs and put them in this nest and another, although the other nest's eggs did not hatch.

We went out to Aurere near Taipa on the East Coast, to a pasture field day.  There was a good turn-out - I wasn't at the very front of the group when I turned to take this picture. 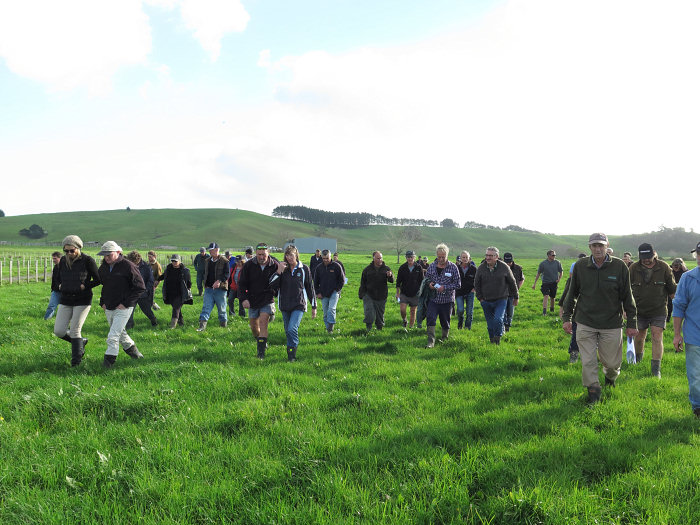 The farm upon which the meeting was held, has been practising intensive cell grazing, where paddocks are divided with electric strings and standards so that the animals are given regular new feed and the areas behind them are allowed extended periods to recover.  It appears to work very well in terms of pasture management and animal growth rates but I'm still not convinced the animals are always very comfortable.  There is rarely shelter in the paddocks and on a subsequent trip past the same farm, I saw the animals hunched in heavy, cold rain and wind because there was nowhere for them to go to avoid standing out in the weather.

Field days like this are valuable opportunities to see how others are farming and to think about how we do things here.  Not everything we learn could be applied and some of things we simply wouldn't follow, on principle.  The organisation and facilitation are funded by the levies we pay when we send cattle to slaughter, along with some sponsorship by local companies which usually provide food and drink at the end of the gatherings.

You may notice that I've gradually been increasing the size of the pictures.  Do you like them bigger like this, or doesn't it make much difference because of the screen-size upon which you view them?

If you view the site on a mobile device, you should find that some of it works better now, since I've stopped dragging my heels over learning what I needed to do to make it "mobile-friendly".  Upgrading the entire site is taking a fair bit of work: it won't happen overnight, but it will happen.