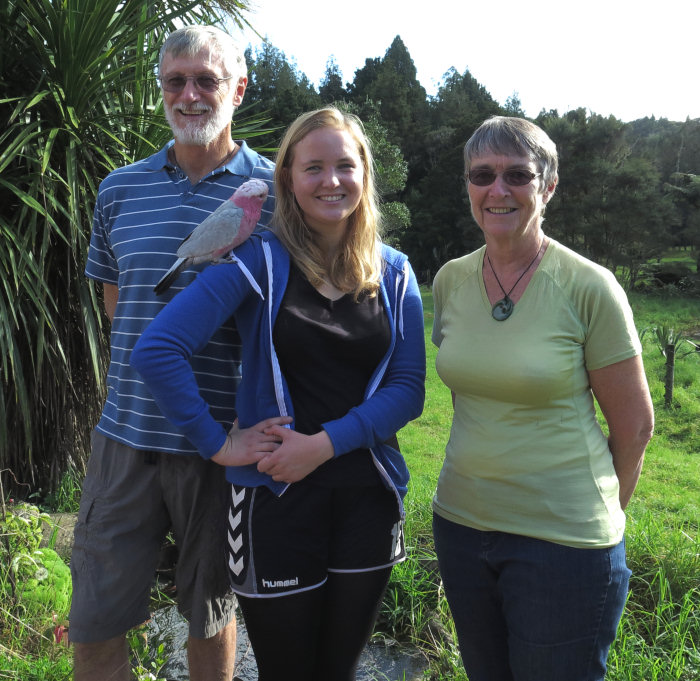 When William and Elizabeth were walking the Abel Tasman Track recently, they kept bumping in to Kerstin and eventually, having got around to introducing themselves properly, invited her to call in and stay when she came this far north; and so she did.  They brought her out for a farm walk today.  Kerstin really liked Floss. 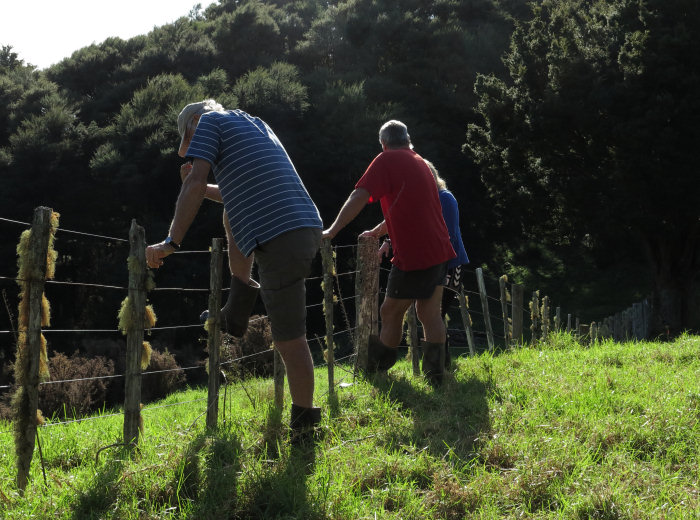 We walked through the Tank paddock, to the top of the ridge which looks over into the Swamp East paddock; we were looking for my ten pregnant heifers and they weren't anywhere I usually find them down the bottom.  Right up here we first spotted Fancy 126, then the others just down the fenceline, behind where I stood taking this picture. 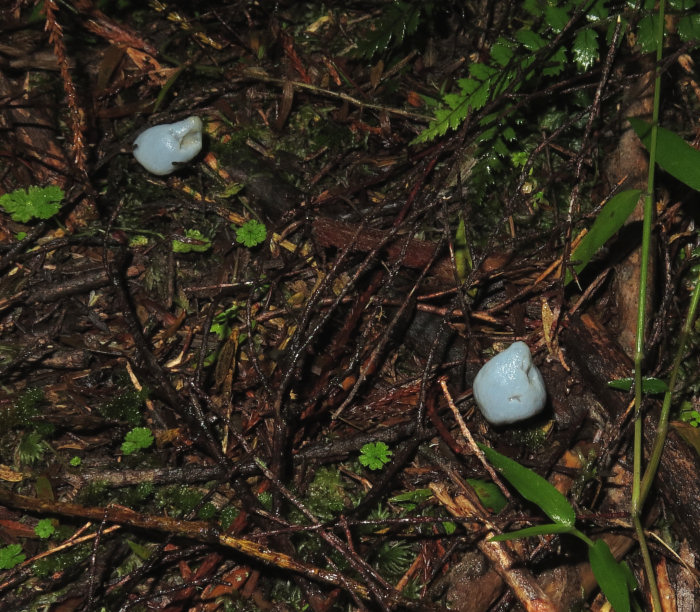 We walked on across the bush-covered hillside, finding these rather interesting coloured fungi.

When we got back down to the bottom gateway, there were all ten heifers, standing in the sunshine. 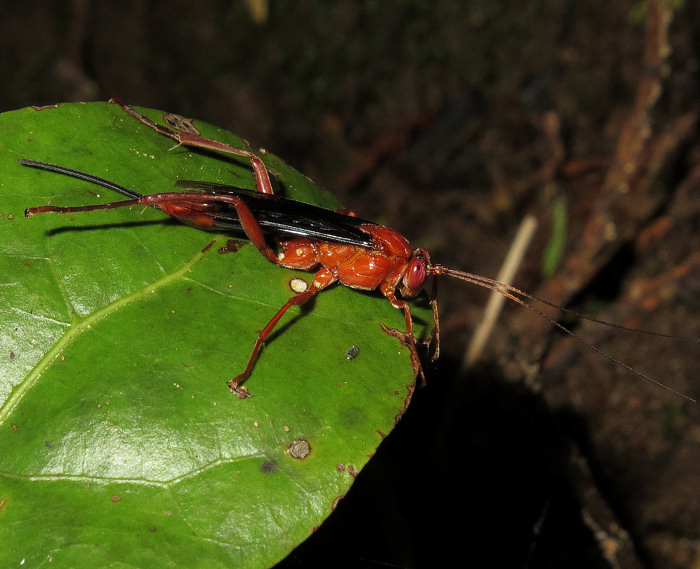 I'm not sure who this is, one of the parasitic wasps; presumably it may be the Orange Ichneumonid wasp, although it's rather difficult to compare this lovely specimen with the shrivelled one pictured in the Landcare Research site. 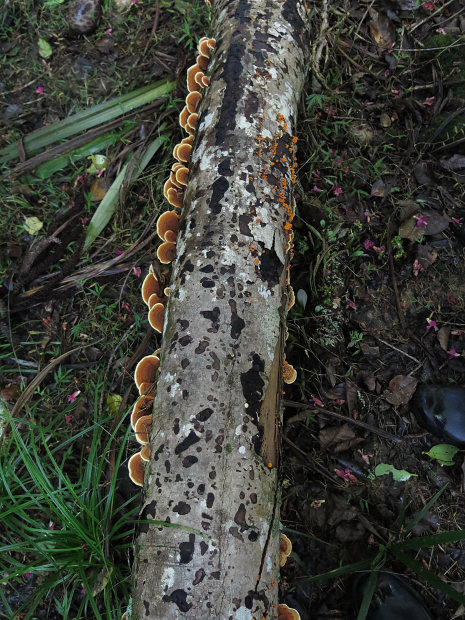 There are so many lovely fungi around at this time of year.  Those which grow in and on dead material are often particularly colourful and attractive. 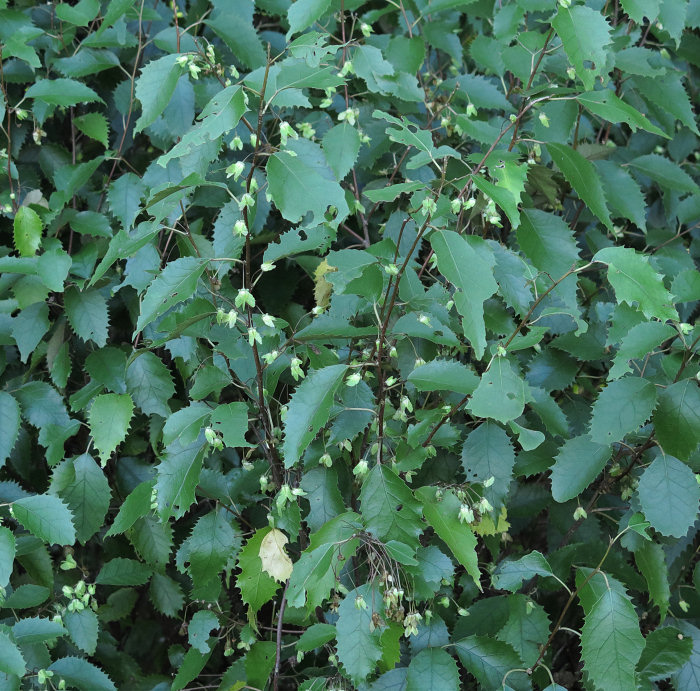 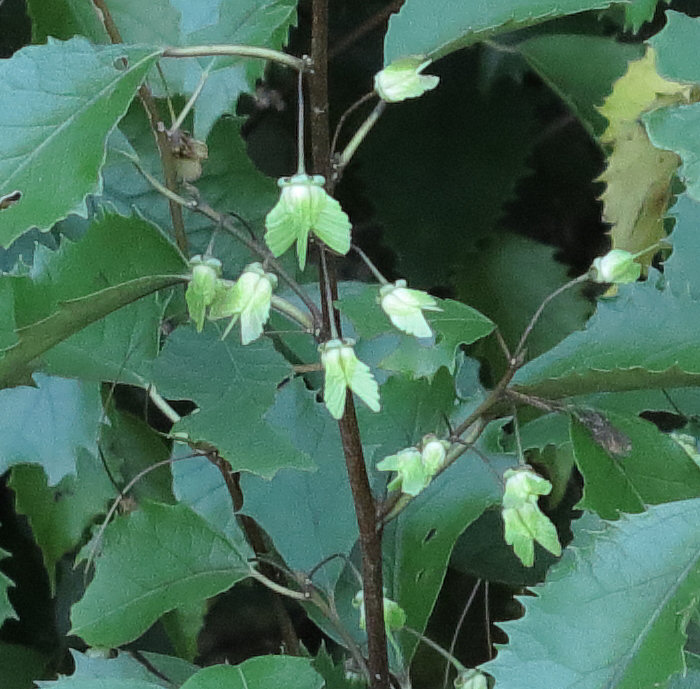 ... with wings.  According to my tree book, each contains a single seed.

Stephan's sister, Rachel, and husband Murray, visited this morning.  We've seen them at weddings and funerals several times recently but it was nice to be relaxed at home for a proper visit. 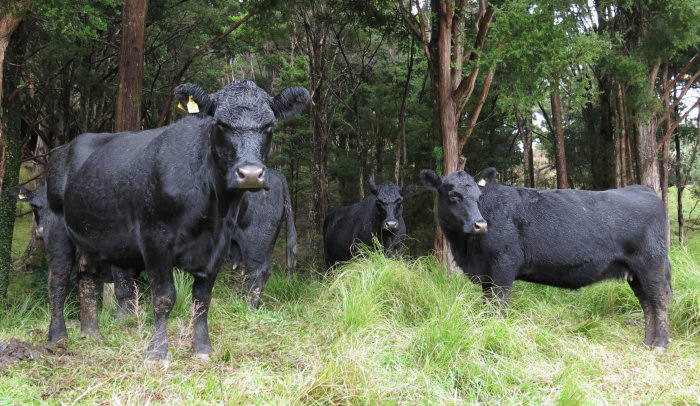 In the afternoon we went together out to the back of the farm, Stephan with the new electric fence tester and I to check on and move the cows from the Middle Back paddock.

While Stephan walked around the boundary fence, I walked up through the paddock, finding this regular grouping of Demelza and family; in this case, from left to right, Dinky 94 behind Eva, Demelza and Ellie 119. 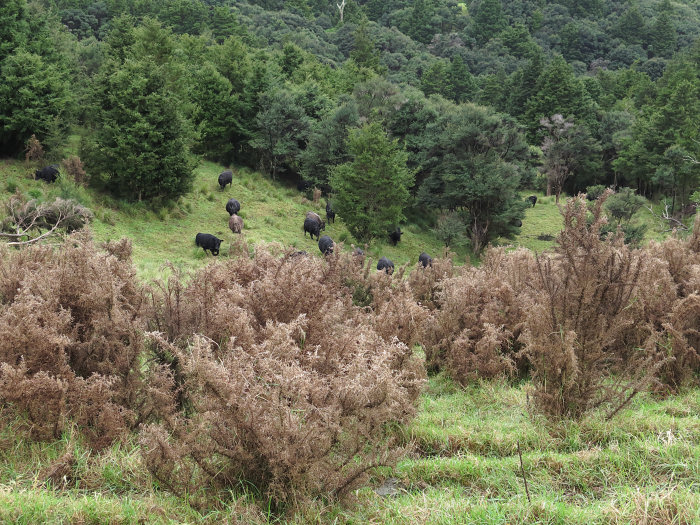 After doing my roll-check and ensuring everyone was there - well nearly, there were a couple I hadn't found, but figured they'd turn up - I began calling them as I walked along to the top gate.  I always like watching the cows coming to a call, emerging from the trees and making their way toward me. 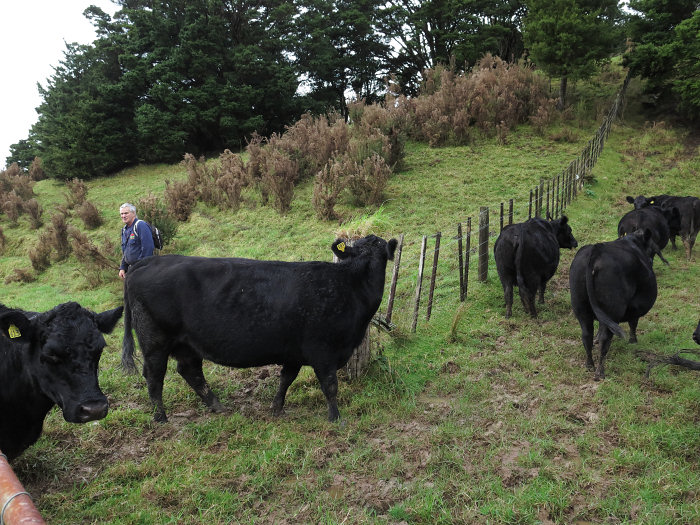 Dexie 101 checked out the special sample of Kikuyu growing out the top of the old Puriri strainer post, as she passed. 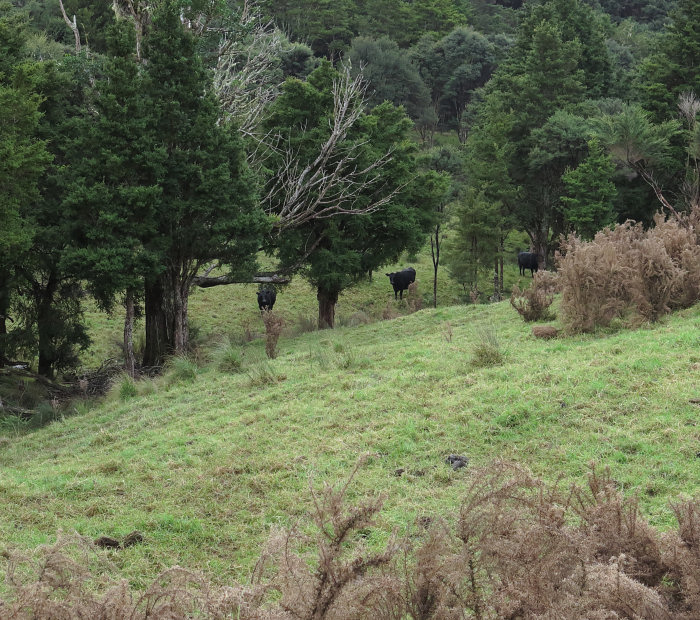 After everyone else had left the paddock, Demelza, Dinky, Eva and Ellie were predictably still standing at the bottom.  Dreadful cows.

I called and waited and called some more and eventually they all walked and ran up the hill.  Demelza can still move surprisingly quickly when she wants to, a good measure of her overall fitness, despite her age.

The shooting in the nightclub in Orlando, Florida, was all over the news over the next couple of days.  Most of the foreign terrorist attacks don't feel very real to us in our quiet part of the world until they hit places or situations in which we have been.  Gay nightclubs aren't part of my current life but they once were, regularly, and the LGBTI community is one of which I still consider myself very much part.  Homophobic threat was also part of my daily life so this act of violence doesn't feel far removed at all.

I spent quite some time over the last couple of days crouched with a stiff-bristled brush and a hose, scrubbing the floor of the aviary.  One of my birds produced a disturbingly large round worm on Sunday morning and so I have set about dosing all the birds via their water supply.  I had to banish the birds from one flight area yesterday when I noticed some were on the floor drinking the washing water instead of their medicated drinking water.  Cleaning without being constantly landed on and nibbled and collided with by flying, playing birds, was much easier anyway. 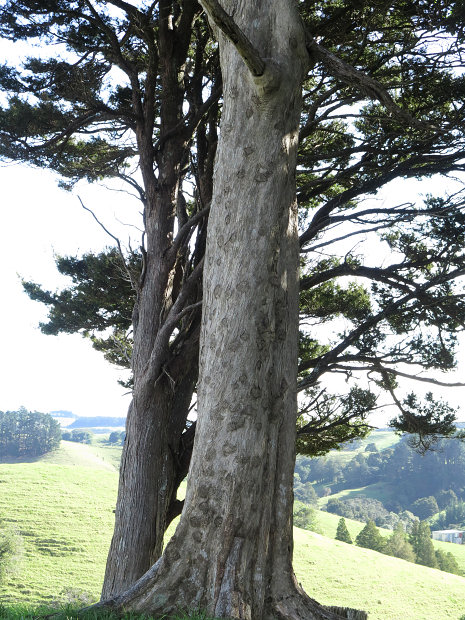 This is a Puriri tree up at Brian's farm, showing very clearly how attractive some individual trees are to Puriri Moth caterpillars.  The circular spots are all healed scars where caterpillars have lived over the years.  Some trees have very few such scars.  In the hard wood beneath the bark, the holes and tunnels the caterpillars made, remain.

Looking back toward our place.  At the extreme right are the slopes which climb to Puketutu, the big hill up behind the farm; the right yellow arrow points to our Pines with the ridge along to the right at the top of the PW, then the Middle Back.  The left arrow points to the big Pine tree on our Eastern boundary, at the top of the paddock Over the Road.  The little patch of sunlit green to the right of it, is the lovely west-facing slope of that paddock.  The farm appears very long from this distance.  From here it is 8.35 km (5.2 miles) in a direct line to our Pines and between the two arrows the distance is 1.28 km. 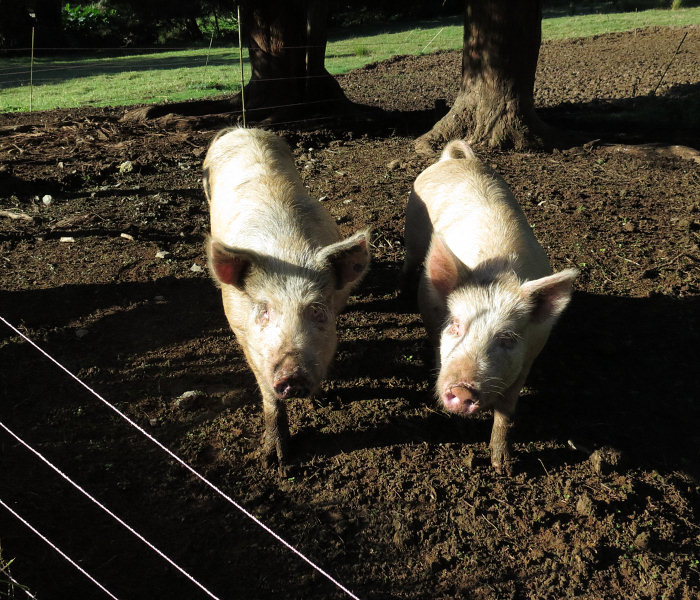 This morning is Wilbur's last.  Young Emma is about to experience the reality of "I want to eat that pig and I want to call him Wilbur". 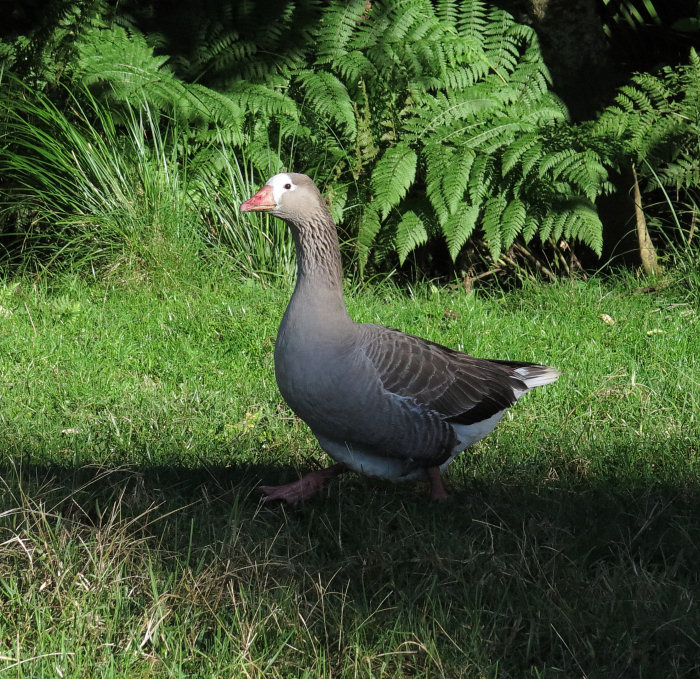 Poor lonely Madam Goose, hanging out near the pigs because the sheep are all away on holiday. 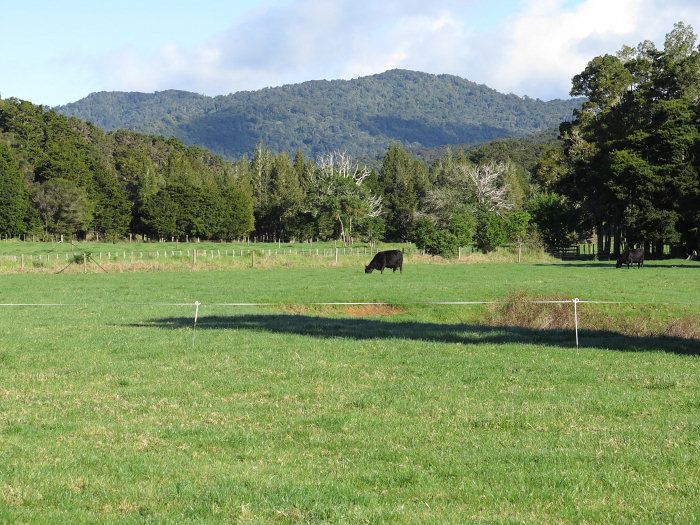 Finding grazing for Imagen and Zella isn't too difficult with only two of them but Stephan wants them not too far away, for bringing in for milking each morning and evening.  They wandered into the Windmill Paddock this morning through the open gate and I had to go and put a tape up across the paddock to keep them off this bottom end where the newly-sown grass is still establishing.  They'd walked over it but wouldn't have caused much damage.  This evening they'll have to go up to the top gate and down the lane. 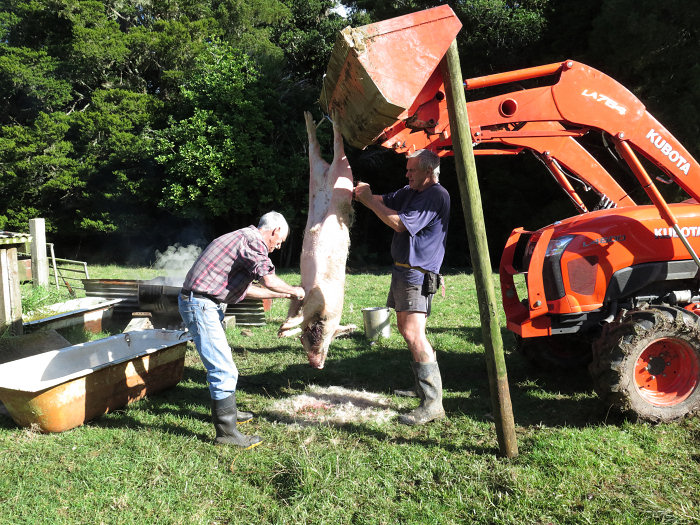 Dan came out to help Stephan process Wilbur.  [Note the addition of the safety feature: a prop under the front-end-loader bucket, to hold it up in the case of hydraulic system failure.] 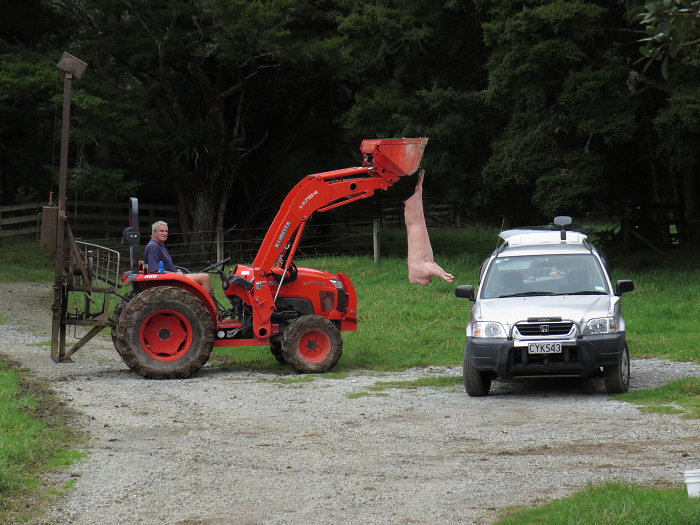 Once they were finished Dan took Wilbur away to the butcher on the other side of Kaitaia. 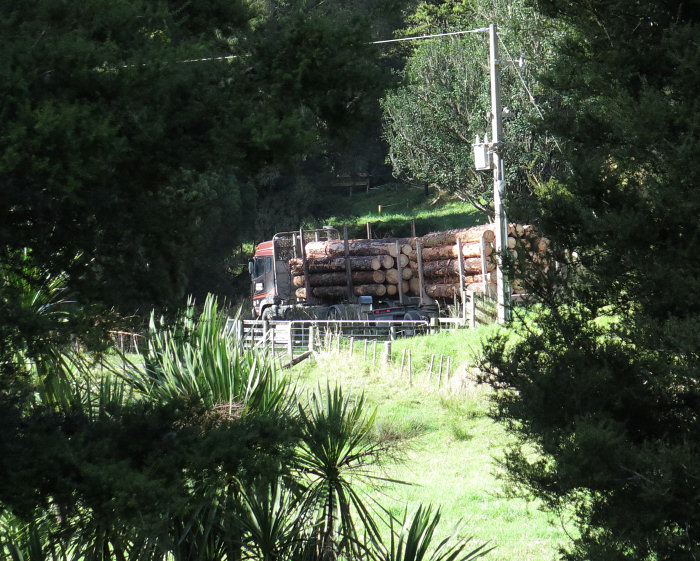 These huge trucks and their metal-carrying companions, thunder up and down the road most days.  It looks like they're working right through the winter this year, which, in the wet conditions, wrecks the road surface and travelling down and up the valley now requires significant care, to avoid thumping into the increasingly large pot-holes.  Every now and then we phone the Council and ask if they'd like to come and inspect the damage and do something about it.  They eventually send a grader out to redo the road surface and it's much better for several days and then back to holes again.  I'm still very glad they didn't seal bits of it which would by now have made things a great deal worse because the trucks are so heavy they'd have made holes in the seal, which would be harder to fix. 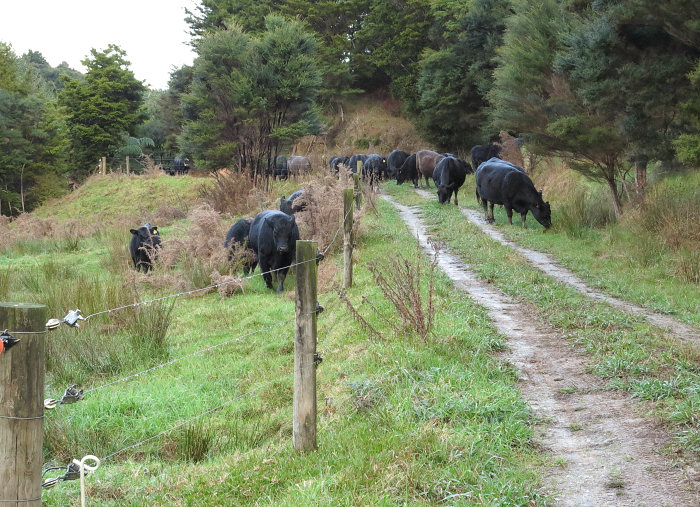 The bulls were perhaps anticipating that I'd open their gate and let them go off with the cows as they came along the lane this afternoon.  Ever hopeful.

I had a call from Leonie to say our second ewe should now be pregnant.  Two down, one to go. 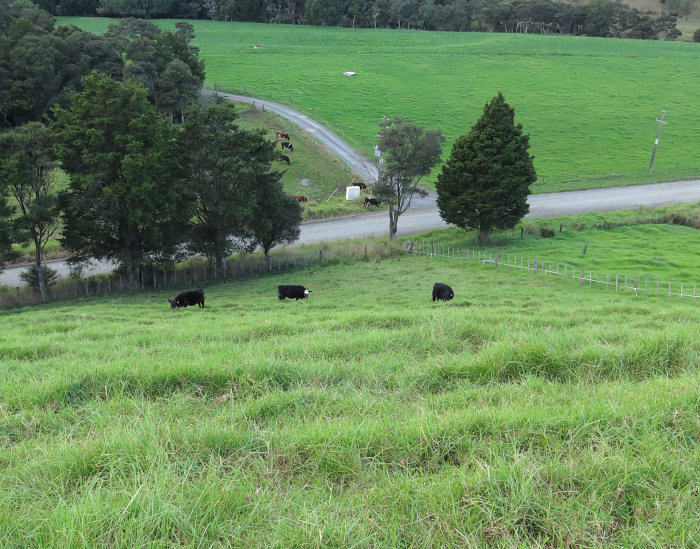 I haven't checked on the little cattle Over the Road for several days, so went hunting to make sure I saw them all individually.  I walked around and up and down the slopes for some time looking for the last three, before looking around the other side of the hill, down in the corner and there they were.

Our third ewe has now been mated so now it's a case of waiting another cycle (about 18 days or so) in case they come back on heat, then we'll bring them home again.