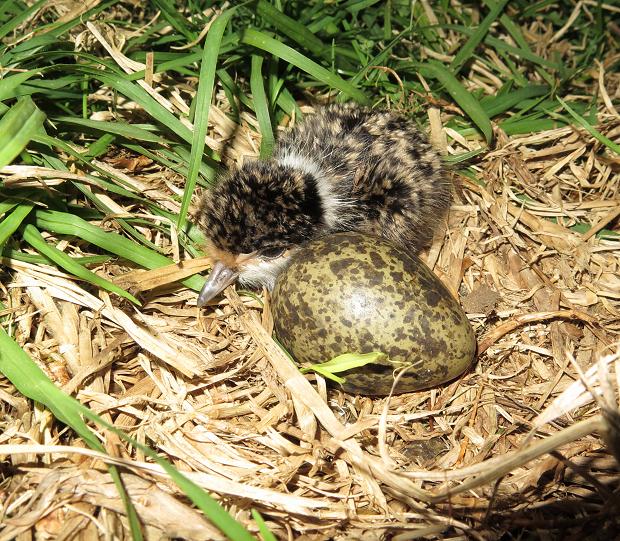 This afternoon as I moved the young heifers from one part of Flat 5 to another, I heard this tiny, newly-hatched chick peeping in the cold.  I was surprised to find it, but later reading revealed the Spur-winged Plover normally nests from April to November. 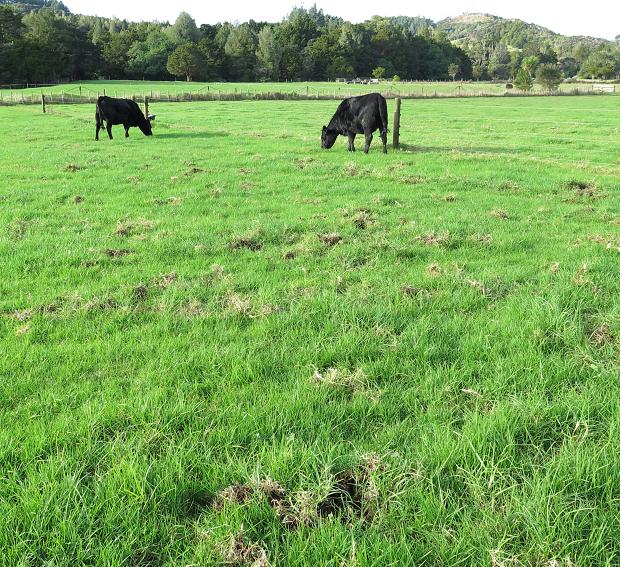 The pigs have been back.  There are large holes across Flat 5c where the heifers were last night and in this corner of 5d where I moved them this afternoon. 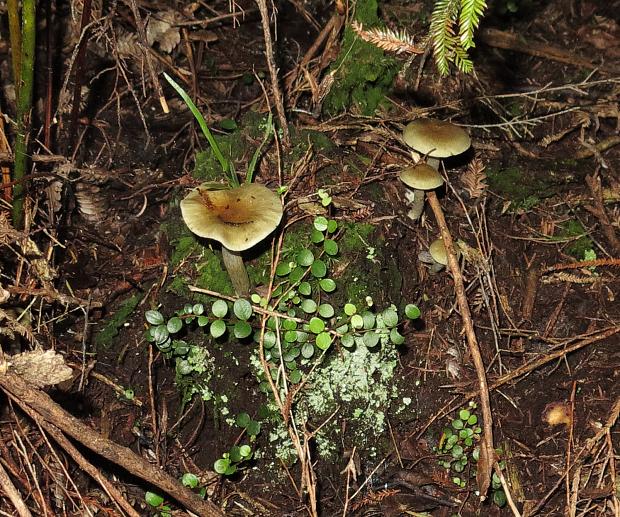 I went for a pleasant wander into the Bush Flat Reserve and then up the boundary edge of the Bush Block, the hillside we look across to from the house.

While there was ample evidence of pigs tracking through the area, they hadn't wrecked everything and I kept finding beautiful little toadstools in the leaf litter.  I adore the colours of settings like this. 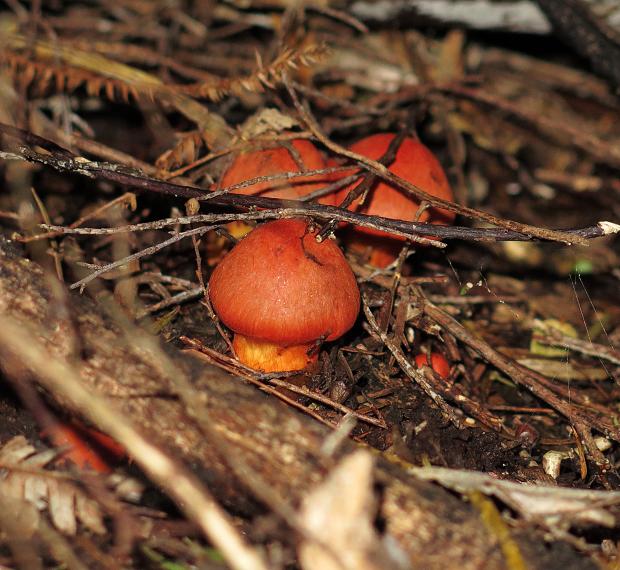 These were rather more startling.  I don't think I've seen this one before. 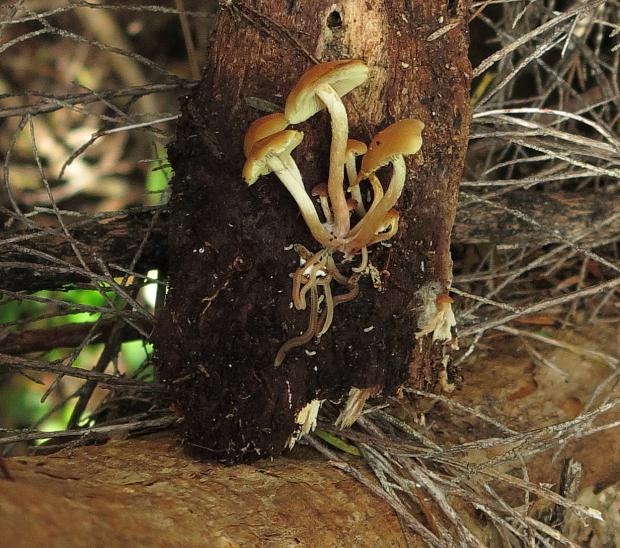 This cluster looked interesting, with what looked like unusual root forms at its base. 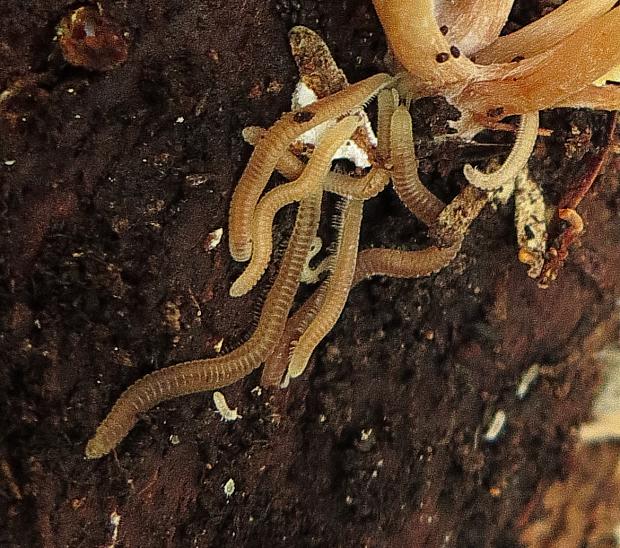 It wasn't until I got home and zoomed in on the image that I saw all the legs on these millipedes!  They were quite still, so I hadn't realised they were not part of the fungus. 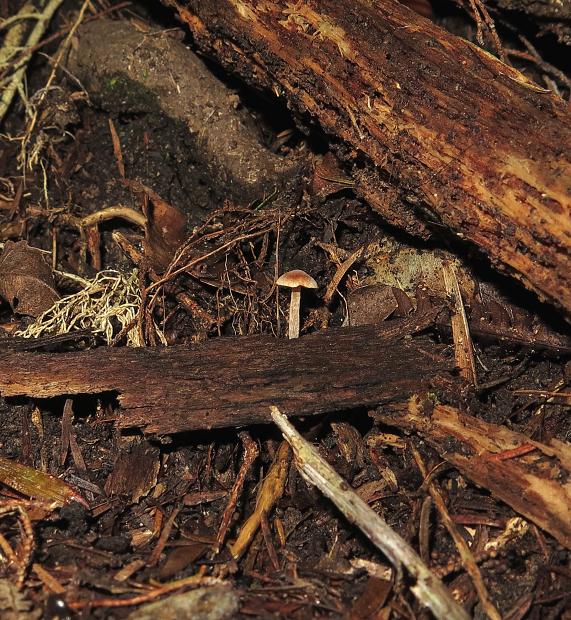 Some of them are so tiny, only a few millimetres high. 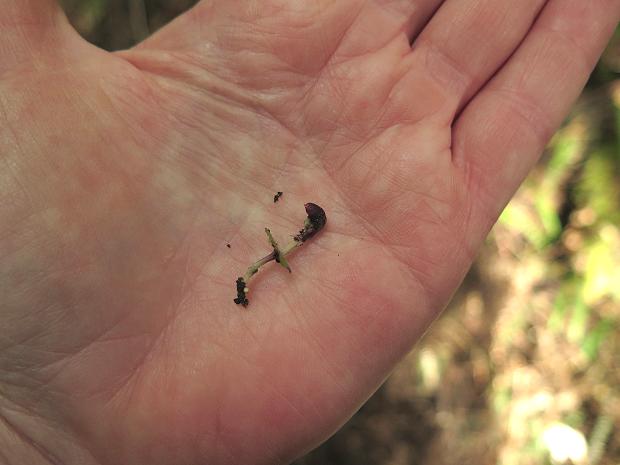 Then I finally saw what I'd particularly come looking for: the native orchid Corybas cheesemanii.  This tiny plant was lying on top of the soil, providing the opportunity to demonstrate why it is quite tricky to find them: they're very small. 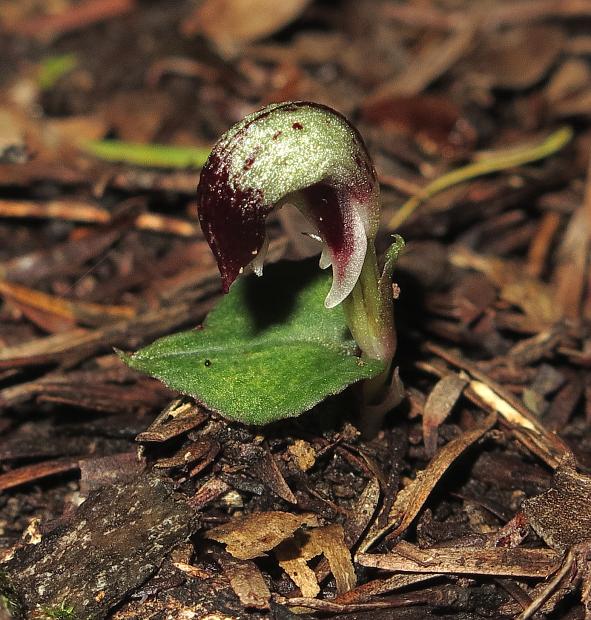 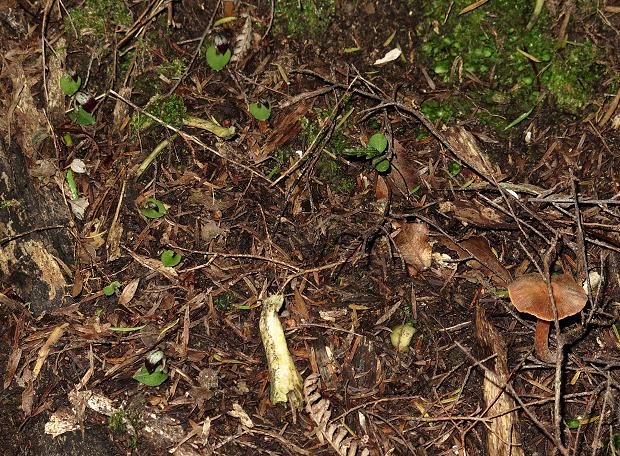 It took me a while to see this group of them in the leaf litter, because there are so many other little green leafy things on the ground.  All the little green leaves in the left two-thirds of this picture are individual orchid plants, many with a flower. 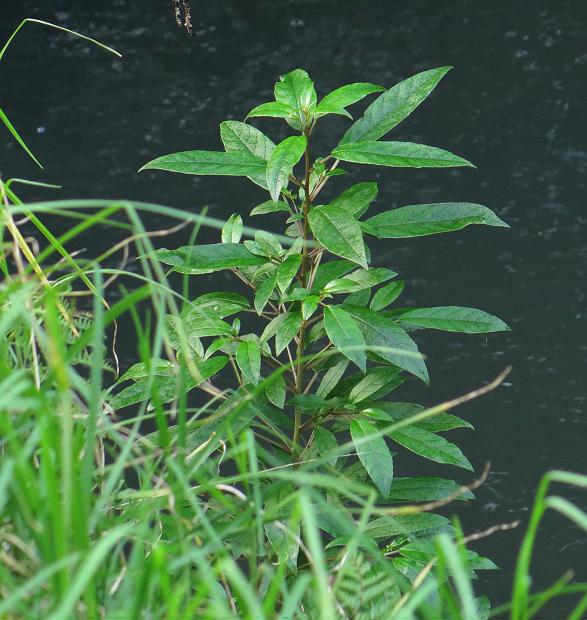 As I moved the cows around to the PW, this plant on the edge of the stream caught my eye.  At first I suspected it was some sort of weed, until a closer look showed it to be Kōtukutuku, the native Tree Fuchsia, Fuchsia excorticata.

The ones I've previously found self-sown near the streams have succumbed to something amiss in their environment - I'd assumed wet roots, since they were in the river gravel.  Hopefully this one will survive.

In the evening we went out and waited in the Mushroom paddock for pigs and two turned up right on schedule at twenty past six.  As I was holding the torch, Stephan took a shot at them and they ran off.

I was so startled when I first saw this going on, as I passed the window while talking to someone on the phone, that I commented quite inappropriately.  I'm not sure someone from the Selwyn Village Retirement facility really needed to know that my budgies were at it as I spoke with her.

These are two adult birds (as opposed to the then-juveniles) we brought home back in April.  They're much the same in colour, except for some pied colouring on the male's front - bits of blue amongst the base green of his body.  I thought they'd be more likely to mate at the other end of winter, rather than now when it's so cold.

We went out again this evening and saw two feral pigs in Flat 5.  Unfortunately they moved some distance away before I could shoot at them.  I think I hit one - Stephan said it squealed, but I heard nothing with ear plugs inserted.

As I stood with one of the heifers out in the Middle Back early this afternoon, I watched the birds in the Kanuka trees above me.  There were a Tomtit (Miromiro), a Grey Warbler (Riroriro), a Waxeye (Tauhou) and a Fantail (Piwakawaka).

At dusk I took a folding chair, Thermos of hot tea, hot-water bottle and wore all my warmest clothing and sat under the Puriri tree in Mushroom 1 until sometime after the pigs usually appear.  I think I must have injured one yesterday and they'll be holed up somewhere, recovering or dying. 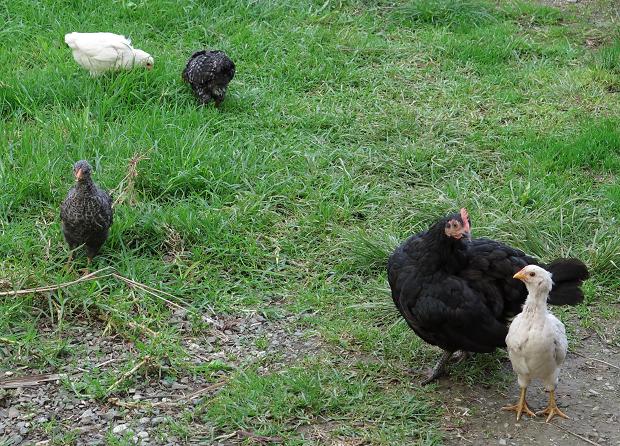 The little chicks are doing very well.  I now let them out of their little cage in the late afternoon, to have a scratch around the garden area with their mother. 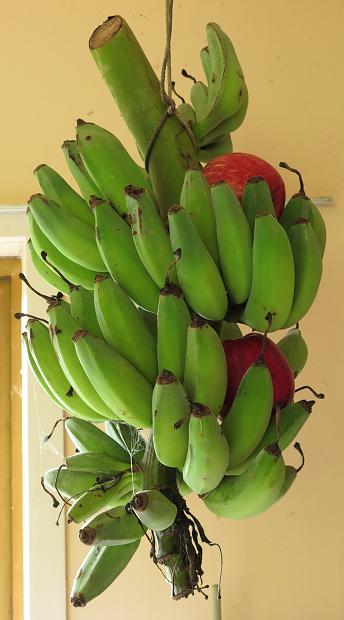 Stephan cut one of the banana bunches down and this morning I noticed he'd perched apples amongst them.  Apple "gas" is supposed to make bananas ripen.  I'm not convinced; I find a ripe banana near them works better, so when Stephan ate the apples, I put one up there. 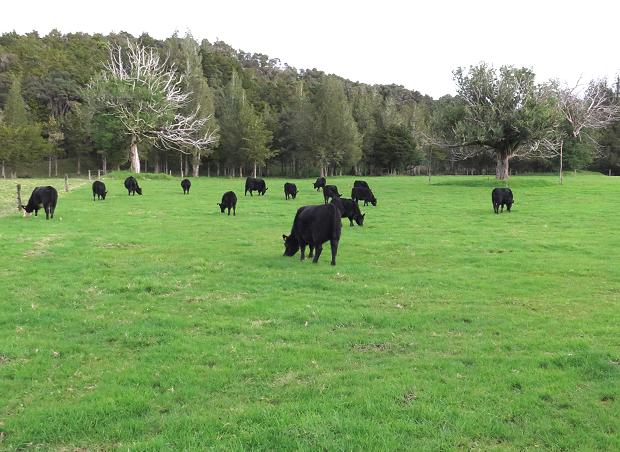 First grazing for the new grass in Mushroom 2, today.  The heifers seem to like it. 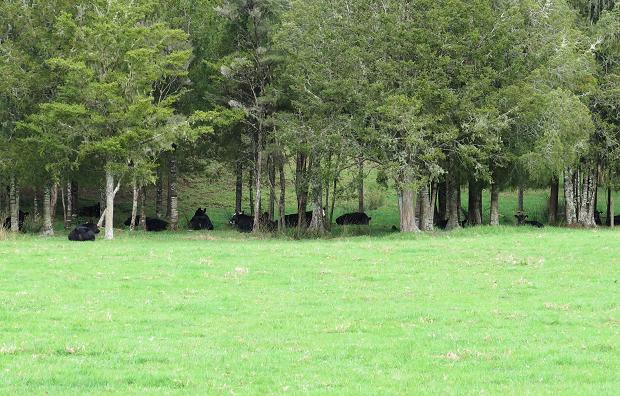 Looking through the binoculars across the flats this morning, I couldn't see a single heifer in Mushroom 2.  Usually there'll be at least one or two grazing, or sitting somewhere I can see them.  Eventually I went for a look, finding them all lying around under the trees.  We had our first light frost this morning, so maybe they were finding it warmer under the cover of the trees. 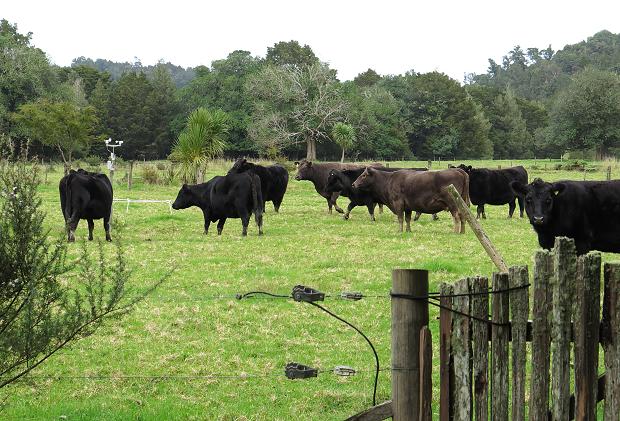 Having apparently ignored it earlier, the cows suddenly became interested in the weather station.  The wind was quite gusty so perhaps the wind-speed indicator caught their attention as it wildly spun. 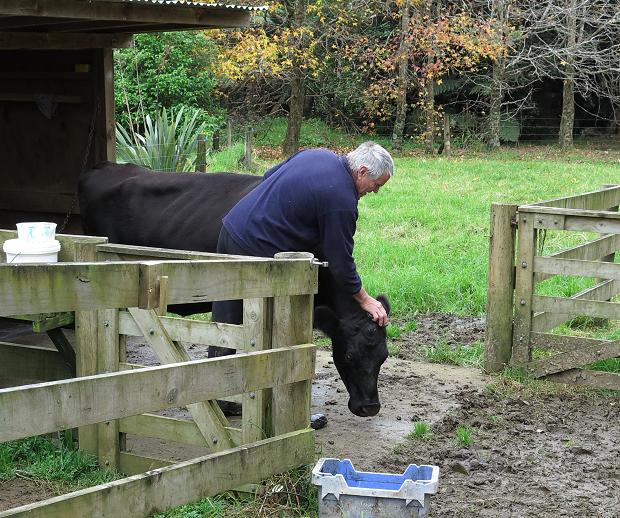 Late for milking this morning, Stephan then spent some quality time with Zella, brushing and scratching her.

Because we're now freezing Zella's milk for use while she's dry, Stephan has been sorting out what's in the freezers and found enough blackberries to make a nice lot of jelly.  I've been having honey on my toast of late, since we ran out of blackberry jelly.  It's a tough life.

I did some work on my cow families table, altering it slightly to keep track of how much influence the various bulls born to my cows continue to have.