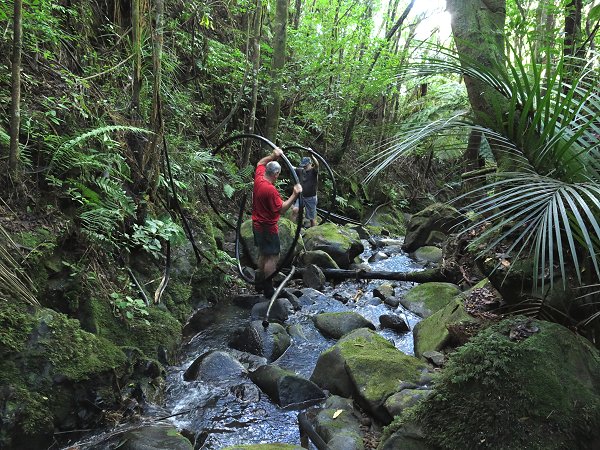 William and Elizabeth came over and we all set off up the hill to fix the water system, which went off again during the big flood last week.

We bought some new pipe three years ago when we thought we'd need it to get past the big slip, but not needing it then, it has been sitting waiting up in the bush for a plan Stephan conceived, to replace a section with too many joints up near the filter intake.  With the extra hands to help today, this seemed like a great opportunity to do that job.

In this picture Stephan and William were carefully threading the new pipe through a small hole under some big boulders.  We had to be careful not to kink the pipe, although at one point we failed, partly due to some unexplained weakness already present.  It worked out alright, with a joint put in at a useful point where it could also be securely fastened to a spike driven in to the rocks. 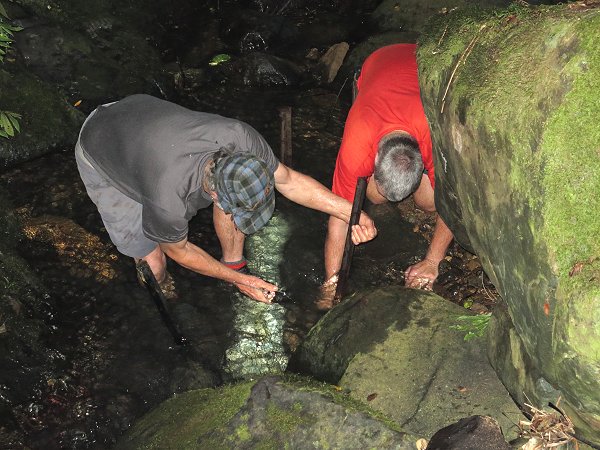 Stephan had previously tied the filter down to a couple of spikes and today they put in two more, to anchor it more securely.  When big lots of water come down through the gully, they wash stones and gravel under the filter, lifting it up out of the water.  With it securely fixed, that shouldn't happen.

We've been fiddling around with this system for years, gradually refining it so that it has become more and more reliable.  We persist because the water's so lovely, straight out of the mountain.  The intake height gives us really good pressure too, which makes it worthwhile.

Stephan hasn't done this sort of walk for months, so it was a test to see how his toe would feel.  He let William do most of the heavy work he would normally do, but was still pretty sore at the end of the day.  His return to trapping will be a while away yet. 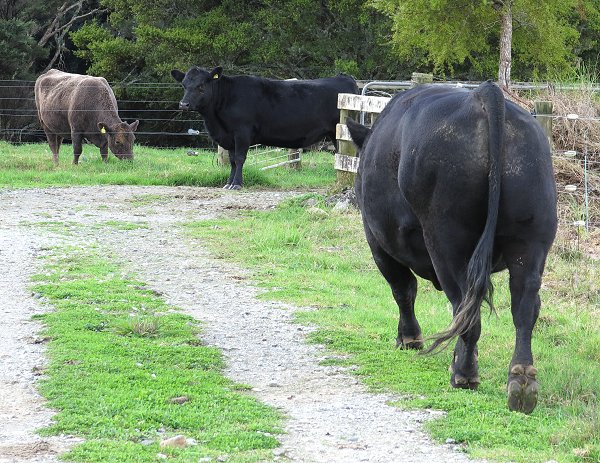 I had arranged to sell Surprise 115 and 657 to Lilo, and having received a call to say the truck will come tomorrow, we went to bring them in this afternoon.

But as soon as we walked toward her, 657 put her head and ears up in a super-alert fashion and trotted off down the paddock.  My cattle just don't do that!  Surprise got upset because of the anxiety in 657.  Initially Lilo was only going to have Surprise and it was my consideration that 657 was young and would continue to be a reasonable cow for someone else, which had led me to withdraw her from the cull mob and offer her for sale; but I won't sell this sort of potential problem to someone else.

We got the two of them out of the paddock, then popped 657 in to the gateway of the Camp Paddock (where the grey cow is grazing) so she can be with the others and hopefully settle down again.

I decided we could go and fetch Mr 87, who'd been by himself for several days, since he didn't bother to move with the Housecows when they left his paddock, and he could keep Surprise company overnight.  Another cow would fight with Surprise, whereas the bull would not - and he's her dad, so they can have some quality time together before she leaves. 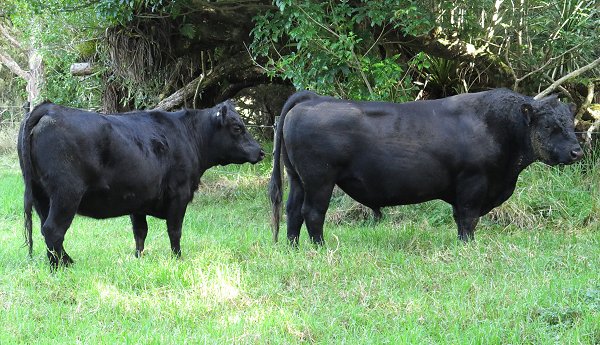 After paying her some inappropriate attention on their way in, the bull and Surprise settled quietly in the Pig Paddock for the night.

I've not ever done the DNA testing to confirm that it is this bull which sired Surprise, but her general appearance tells me it was he and not Joe 90 who got the job done back in January 2011 - I swapped the bulls over when Demelza and a couple of other cows came back on heat, causing me some worry about Joe 90's fertility.

In either case it doesn't matter too much; she's a purebred animal and three quarters of her pedigree will be the same, whichever bull was her sire. 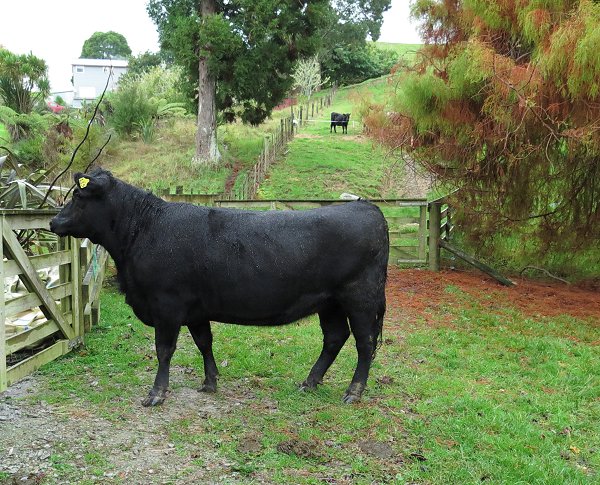 We put 115 on the truck on her own this morning and then followed the truck around to Lilo and Peter's place to see her unloaded and settled in.  We got there several minutes before the truck, without passing him on the way, so he must have gone the weird way.

Surprise is a pretty placid animal, but I stood with her to keep her calm while Lilo loaded some other animals onto the truck to go elsewhere, then came to set things up for Surprise to join those little black animals up on the hill.  She'll miss her old friends for a while, but will settle in well enough with the new lot.  Lilo has been breeding dairy cattle for milking and buying in and growing on dairy-cross animals, so this step into breeding real beef animals is a new direction.  I hope she does well and I hope Surprise will be an excellent starting point.

We came home in drizzle just before noon and the rain set in for the rest of the day.  The river came up higher than last week and when I shone the torch outside to check what was happening down at the pond, I thought there was water flowing in from the stream (turned out it was just the light shining on the floating raft - must go back to the optometrist!).  We donned warm clothing/wet gear, I put on the head-lamp and Stephan took the torch and we went down to rescue the chickens.  The two old little hens which have been living longer than we intended immediately got the chop, pending going in to the bait bin for trapping, two other young hens went from a separate cage in to the Poultry Palace with the rest and we carried the six young birds and their mother from their cage up to the lawn. 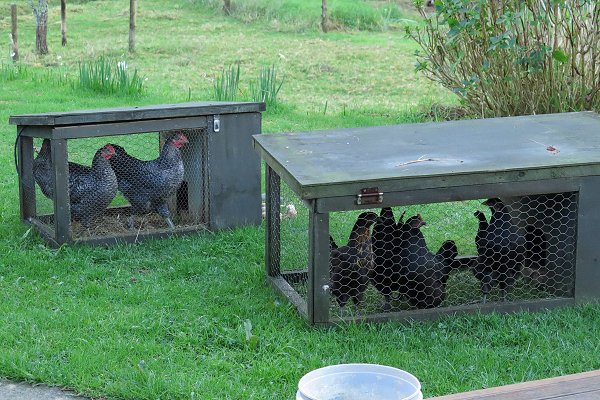 It didn't rain much more overnight, but we felt better knowing the poultry were all safe from getting wet and possibly drowned.  We had 67mm in the gauge and our water is still running.  That was quite a big flood, but the waterline renovation appears to have held together.

Today we carried the hen and her daughters back to the cage, leaving the young roosters in the larger of the two cages, awaiting "processing".

Moving chickens is quite funny; they moved their heads with every step I took, as if they were walking themselves.  Because I was holding three of them, their movements were more obvious than if there'd been only one.  They're lovely, soft little birds and quite calm when being held.

Fortunately we weren't trapped by flooding this week and Stephan could get in to town to the gym.  I'm sure he should have some lycra!

I dropped him there and went to the Intermediate School and spent a couple of hours sitting with some boys, teaching them to knit.  Their teacher advertised for knitters last month, to come and work with her pupils to introduce them to knitting.  I'd been a little slow in responding and then last week couldn't get out because of the flooding.  Lots of the children had already got to grips with the basic techniques, so I had one boy who could already knit very evenly, but taught him a better way to cast on than he'd previously been shown and I spent some time with another couple who were less advanced, but making good progress.  The girls all went to sit with the older women.

I keep enjoying knitting socks, currently doing a pair for Jackie, who so kindly fed us regularly when Stephan was most disabled.  The wool is a yarn I've not used before, but might have to buy for myself, having a lovely feel.  (I've just looked at the label and discovered why it feels so soft: 55% Merino, 15% Alpaca, 10% Possum and 20% Nylon.  I bought it because it was the only black yarn in the shop, that being Jackie's preferred colour, and didn't look closely at the label other than to confirm it was NZ wool.)  Knitting black socks is not the easiest thing.  I find it necessary to use the headlamp, even under a bright light, to count rows or see stitch detail when knitting at night. 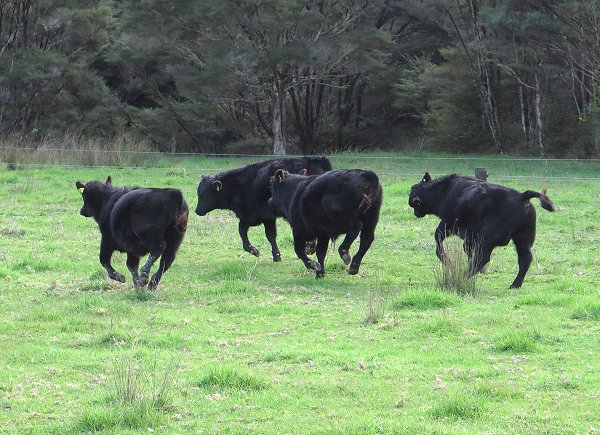 Frisky R1 (rising yearling) bulls are entertaining to move.  They wouldn't be so entertaining if I were in a rush, but I had the time to quietly walk around them a couple of times, to eventually get them to the gate they'd bounced up to and then away from as they tussled and played. 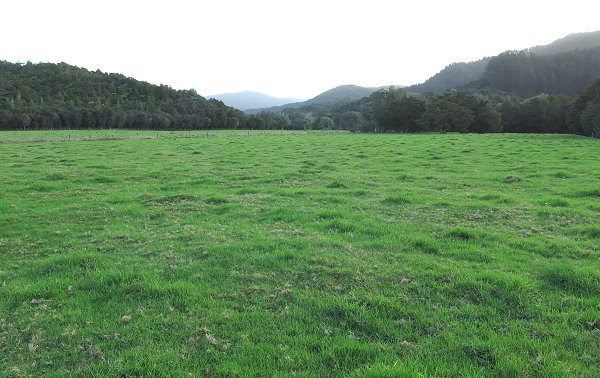 When the frost hit three weeks ago, I wondered how much more grass growth we'd see before the winter really kicks in.  But the overnight temperatures since then have been 1.5° above average, so the grass has been able to grow again.  Much of it at this time of the year is rye grass, which dominates when the Kikuyu slows down, but even the Kikuyu is growing a bit at present. 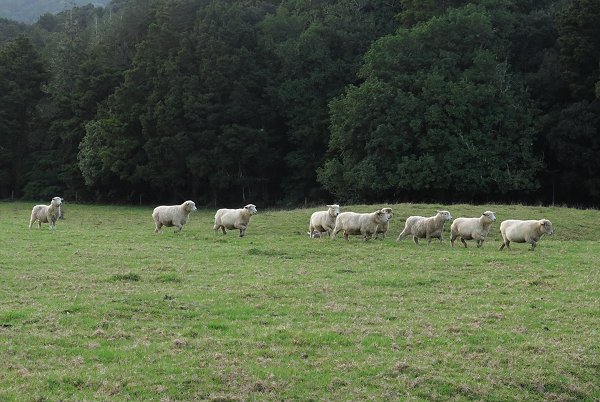 The sheep have been in the House Paddock for five weeks.  Three weeks ago, when the frost had knocked the Kikuyu right back, they weren't very happy, but today I noticed how much the grass is starting to grow around them. 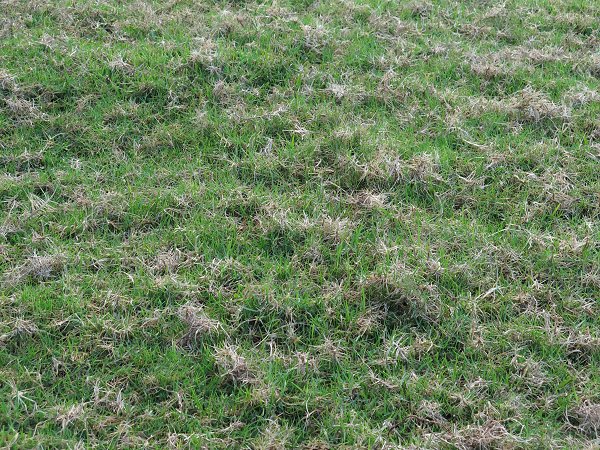 Sheep keep the general pasture level low, which is good for the paddock and for the cows and calves which will graze it later.  Because they have different intestinal parasites, the sheep will eat closer to the areas the cattle leave around their own manure patches, thus tidying everything up nicely.  Nine sheep eat a surprising amount of grass.

All those rejected dead bits of Kikuyu gradually disappear back in to the ground.  When they sit around like this I wish I had a huge vacuum cleaner to suck them all up, but they no doubt eventually contribute a lot to the organic matter in the soil.