The week beginning the 7th of June 2014.
Saturday the 7th 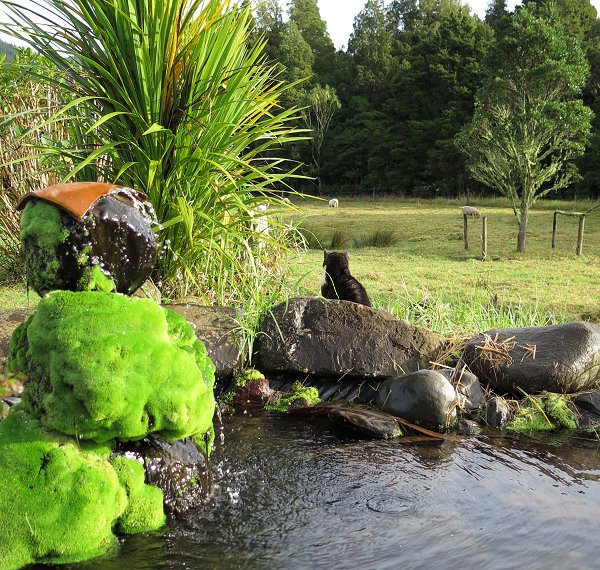 Foxton spent the morning sitting, looking into the distance.

She was still very responsive, but not a comfortable cat.  I was glad I'd made a firm appointment for her last visit, or I'd have been second-guessing myself all morning about whether or not this was the right time.  She continued to refuse food. 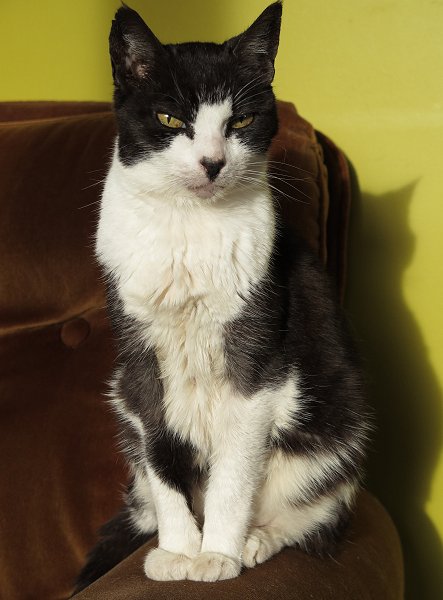 She was a pretty little thing, with the kindest eyes I recall on a cat, although not her best photo in that regard on this occasion.

We put her in a cage (which she hates) and once under way I got her out and held her in my arms on our way to town.  Her end was quick and efficient as I held her head in my hand and watched the life disappear from her eyes.  An easier death than what was obviously coming. 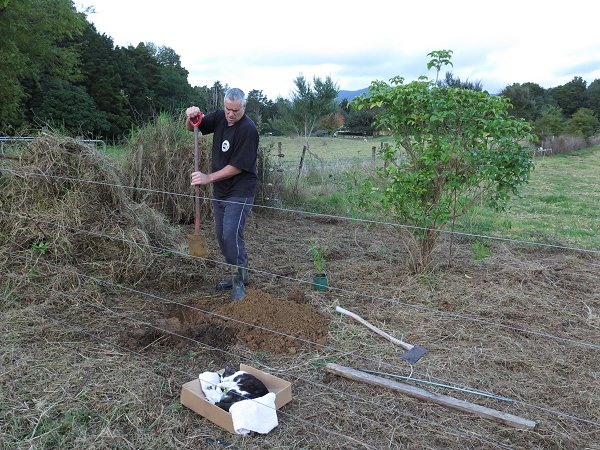 I left Foxton lying in front of the fire for the rest of the day, thinking it would be good for Finan to see that she had not simply disappeared; but he didn't go near her.

Stephan took the scrub-bar and tidied the overgrown cat cemetery and we took her there for burial.  Since she had spent the morning sitting under my favourite Cabbage Tree, I decided to plant one over her - along with some catnip, for old times' sake. 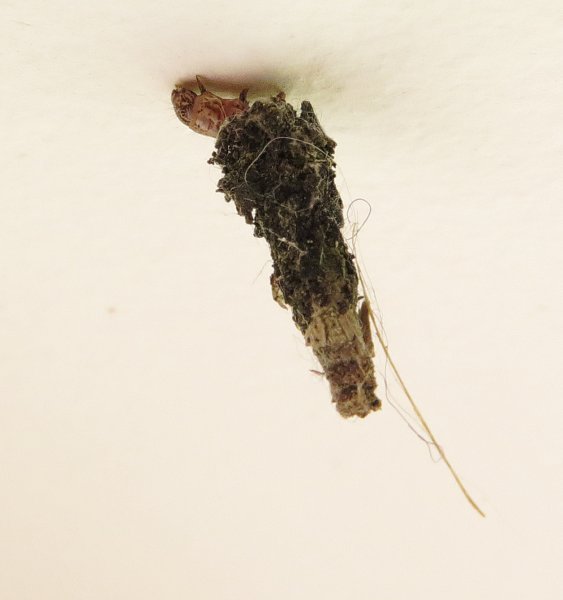 Liothula omnivora, I presume, but why it was crawling across our ceiling, I can't imagine.  I gently dislodged it and put it outside where it could attach to some foliage instead. 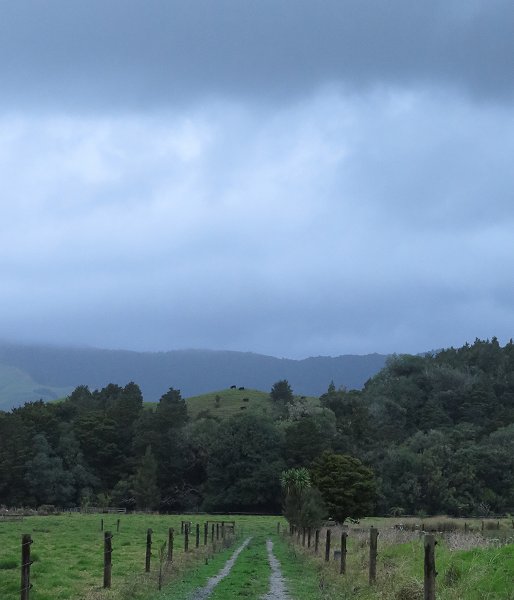 5pm and so dark!  The expected heavy weather is building up.  We'd already had 50mm of rain in the gauge by the time I took this photo.  I went out in a short "dry" period to check and move some animals.

There's a big wet load of cloud on the satellite weather pictures, funnelling down over us for the next two or three days, accompanied by weather watch and warning notices from the Meteorological Service. 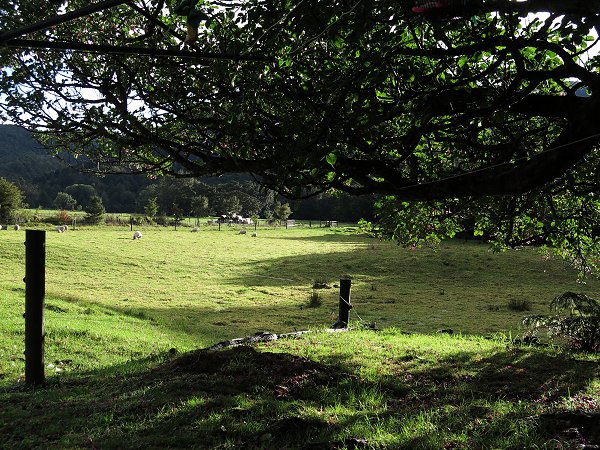 The rain, which fell steadily all night, had been gradually lightening during the morning and we kept going down to the bridge to see how fast the water was receding, since Stephan was supposed to be meeting a physiotherapist in town this afternoon.  It looked hopeful for a while, but eventually we had to cancel the appointment - and then it started to bucket down again!  If we'd got out, we'd not have got back in.

After about half an hour of very heavy rain, suddenly the sun was shining and everything looked crisp and lovely. 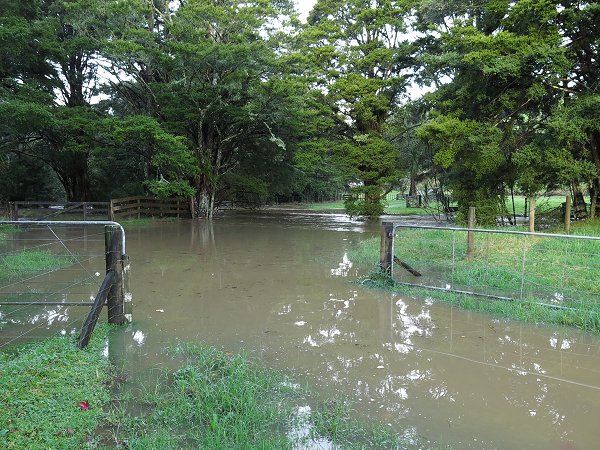 But then the water came up and kept rising.  It just started coming over at the corners, one of which sends water down our driveway and the other which floods into the pond. 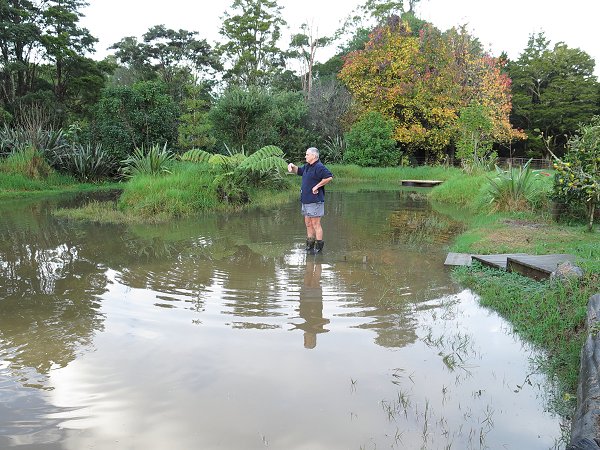 Thinks can walk on water. 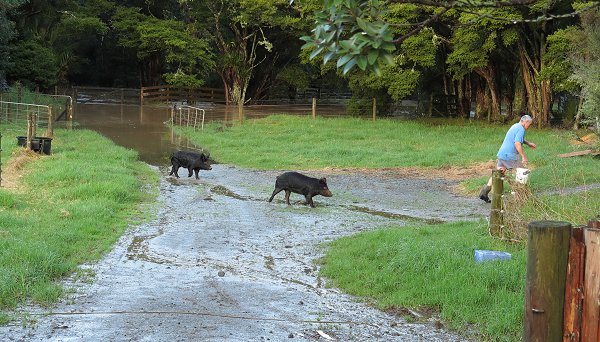 Stephan said he was sitting quietly in the house and heard grunting.  The pigs had pushed out through the electric tape, probably because the power was right down because bits of fence were under water.  Fortunately they're very easy to lead back to where we want them to be.

I rescued poor old Lamb early this morning, cast on her left side.  She looked like she may have been stuck for most of the night and when she stood up, she seemed terribly bloated.  She stood uncomfortably for some time, but eventually came right.  She had presumably been unable to belch any rumen gases while down.  I half expected her to go into a mortal decline, but she seems alright. 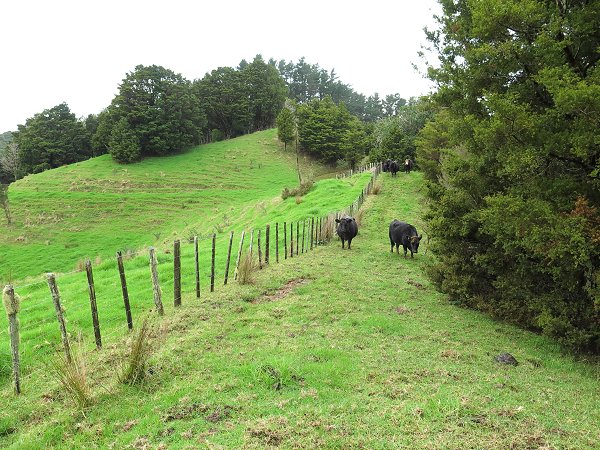 I walked up through the Big Back North paddock checking the cows, then called them to follow me down to the gate to the part of the paddock on the other side of the swamp.  They didn't.  I suspect they thought they'd prefer to go into that very green Middle Back paddock instead, which I'm saving for the pregnant heifers.

Dinky 94 has something going on in the left front quarter of her udder.  It feels as though it's a milking quarter, although she's now dry.  There's no heat or soreness, but I decided against attempting to squeeze anything out to check what's in there - that would potentially open the teat to infection, or more infection, if that's the problem already.  She seems quite well, so I shall monitor her and take action if anything changes for the worse. 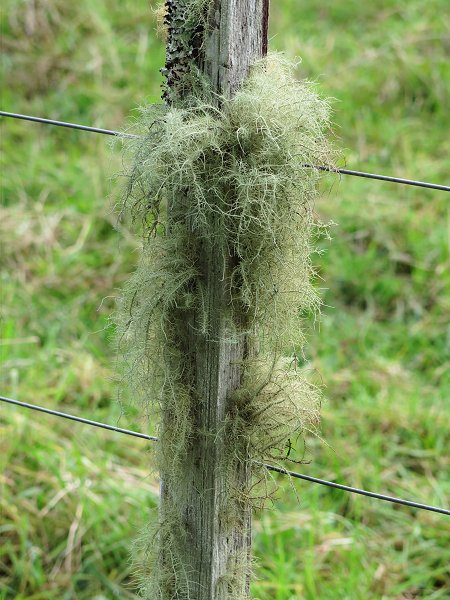 I thought this lichen rather pretty.  I like lichen. 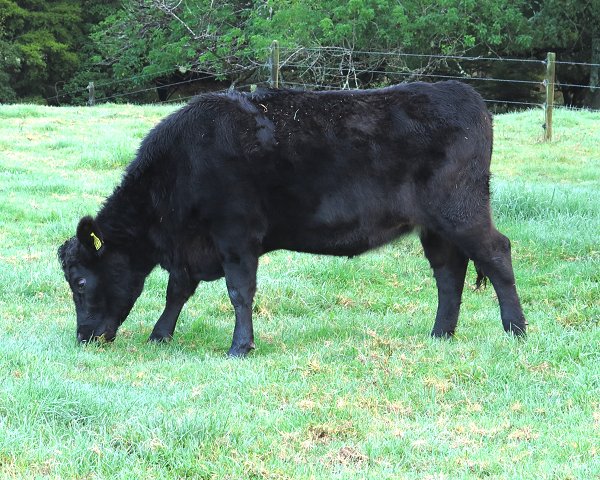 Squiggles' daughter Ivy 112.  She was a pretty good calf up until weaning, but afterwards she sort of fell apart, growing much more slowly than the others of her age and never looking terribly good.  I've been surprised that she still hasn't filled out very well now she's two-and-a-half and pregnant.  Normally they're blooming when pregnant for the first time at this age.

I have no doubt she's generally healthy - dashing about kicking up her heels with the others - but there's something about her metabolism which is all wrong.  I have a strong suspicion it's all caused by that most interesting area of epi-genetics and the intergenerational effects of under-nutrition of a prenatal animal.

I kept her mother, Squiggles, because she was the last calf of Ivy 556 of Maunu, but she should never even have existed.  It was all Jill's fault in the beginning, with her emotional "oh, you can't send Ivy" response to my comment that Ivy needed to go off to the works.  Why I listened to my mother then, when her advice and assistance has been so lacking throughout my life, I do not know - perhaps because it was so rare, I did then and kept Ivy for another year.

The following year Ivy went in with the bull for a single mount, got pregnant, looked lovely through the rest of the summer but toward the end of her pregnancy progressively physically declined until she was a rake-thin skeleton of an animal at calving.  I assumed she was carrying twins, fed her as much supplement as I could and hoped she'd come through.  Squiggles was born a week earlier than Ivy's usual gestational term but was very small and Ivy had very little milk.  If she'd been born in one of these years of house-cow milking, I'd have taken her from Ivy and raised her by hand.  Ivy died when Squiggles was five months old and still far too small for her age.

Squiggles took an extra year to mature, but carried her pregnancies well enough, producing calves which did much better than I thought they would and it was for that reason I kept Ivy 112.

A lot of research work is being done on the effects of differing prenatal nutrition and the intergenerational effects - your granny grew up in the war years during food rationing, so what does that mean for your children?

I understand that Professor David J P Barker first proposed the intergenerational effects of maternal nutrition.  I found this article rather interesting.  If that is true, I believe it would fit Ivy, Squiggles and her daughter perfectly and presumably affected . 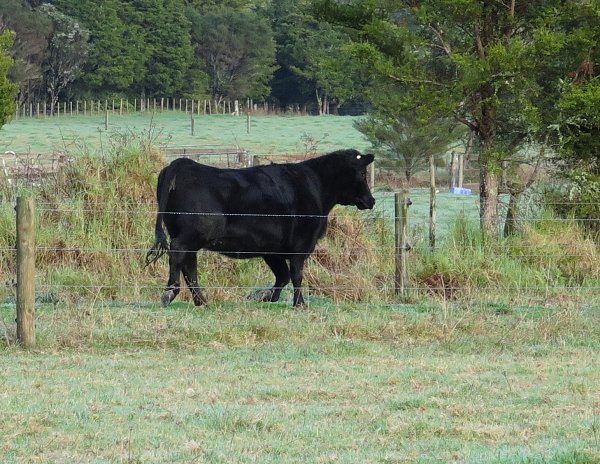 When Xavier shot 112 and she dropped, 657 looked quite alarmed, so we let her directly out the gate (as planned) but she continued looking more upset than I've seen an animal on this farm for a very long time!  I don't think it was specifically the slaughter of her paddock-mate which caused her upset, I think this is her nature.  I've suspected as much for some time.

I have observed that in cattle, it is almost as if there is a switch which gets flipped on at times of stress, which makes them entirely unpredictable, in pure fight-or-flight mode and they'll go through or over anything to get away.  There is no dealing with them when they are like that, unless they or people around them are in danger and something must be done.  In this situation, the best thing to do was to give her space and time to go and reset her switch.

I walked up the House paddock so she wouldn't feel I was pursuing her and when I got around in front of her to open the top of the lane, she still looked like she would have gone straight over the gate if I'd not quickly let her go.  She has the same sire as bull 96, whose temperament was also not very satisfactory.  I blame their sire for their problems, both maternal lines being quiet cattle. 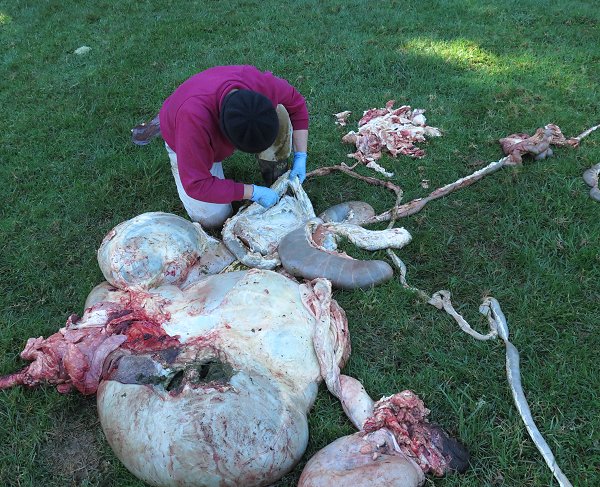 Slaughterers usually take away the innards, head, feet and skin of a homekill animal, but I asked Xavier to leave me with the whole gut - he only took out the heart and kidneys to go to the butcher.

I spent the next three hours gradually cutting it all apart.  This is something I've wanted to do for the last couple of years, but last time we had a heifer done, Louie and Ella were here and as both were squeamish about the butchering process, I doubt they'd have been entertained by this bit afterwards.

I'm familiar with diagrammatic representations of the bovine gastrointestinal system, but I wanted some real experience of how it all fits together, how much of everything there is, how big things are in reality and so on.  I was particularly interested to explore the area where 604's intussusception occurred, to see how things should look, ordinarily.

There was a great deal of fat everywhere around her organs and intestines.  I'm not sure how much is normal, but I didn't expect there to be much from her outward appearance.  Perhaps this was how her body dealt with any extra resources: not by making muscle, but by storing it as fat for later energy provision during hard times. 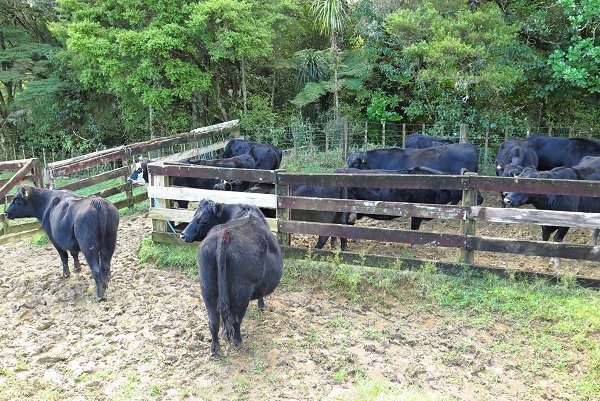 Today was not the best day for everything to happen, but we're unable to influence such things when they coincide.  The cull cattle were also to go off to the works this afternoon.  They could all smell what I'd been doing across the other side of the stream (the breeze wafts around in a circular and unpredictable fashion, some days).

Another tough group to send off, but I've been preparing myself for many weeks.

So there go the last three daughters of Quadrille, one of my favourite bulls.  He still has nine descendants in the herd. 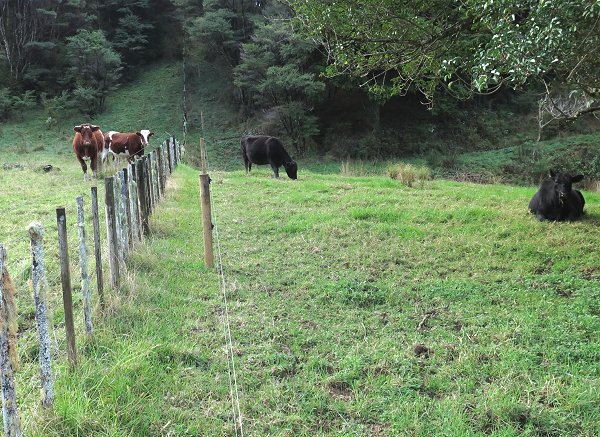 The neighbours out the back must have less cattle than they once did, but I'm still pleased that when they are there, they can't touch noses with mine. 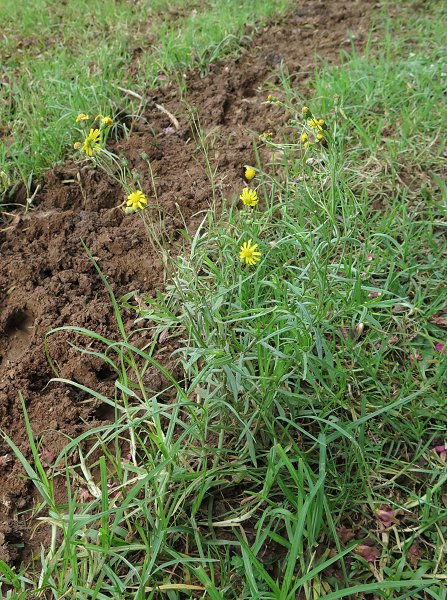 Another of these innocuous looking little plants: Gravel Groundsel, Senecio skirrhodon.  I took it home and put it in the fire.  I'll have to keep a sharp eye out for more of them around the place.  We must not let them become established here. 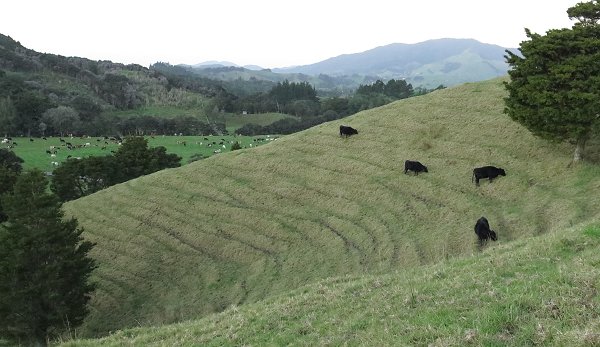 I'll need to move these heifers tomorrow, although they still seem content enough here.  I don't want to push them too hard and they might as well be eating the best food around the farm while it's available.