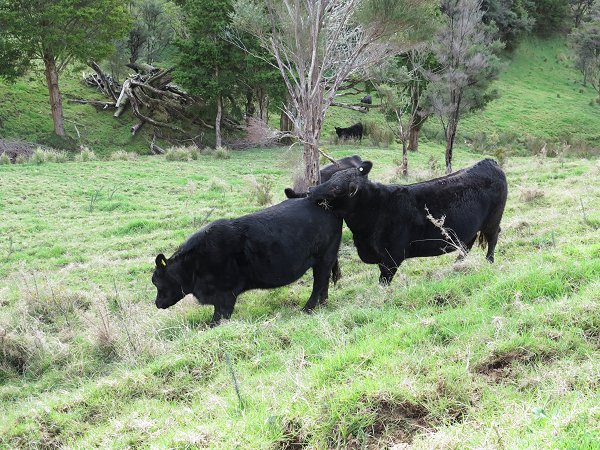 Almost all cattle pictures this week, no pretty birds, insects or flowers.

The pregnant heifers are now in the previously-bright-green Middle Back.  730 was on heat again today and I could hear her calling from some distance away as I walked through the Back Barn Paddock to go and check on them.

I started putting Iodine in the troughs today, something I do over the winter months while the cows and heifers are pregnant, to ensure their calves are not deficient when they're born.

New Zealand soils are deficient in Iodine and it seems reasonable to assume that if people require supplementation, the animals will require some too.  New Zealand table salt has been iodised for about the last ninety years but in recent years, with people thinking they're making "healthy" choices by using sea and rock salts, and changes in processed food production, iodine deficiency has been showing up again in some sectors of the population. 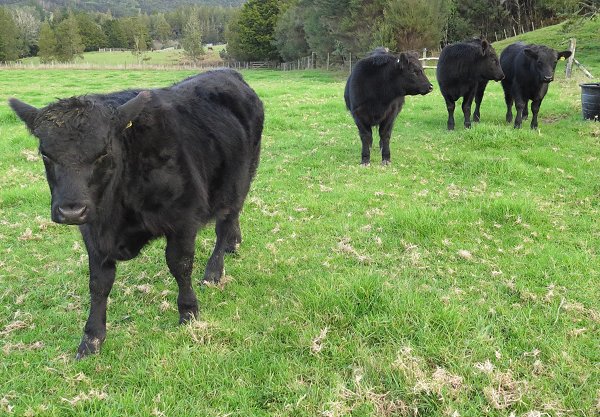 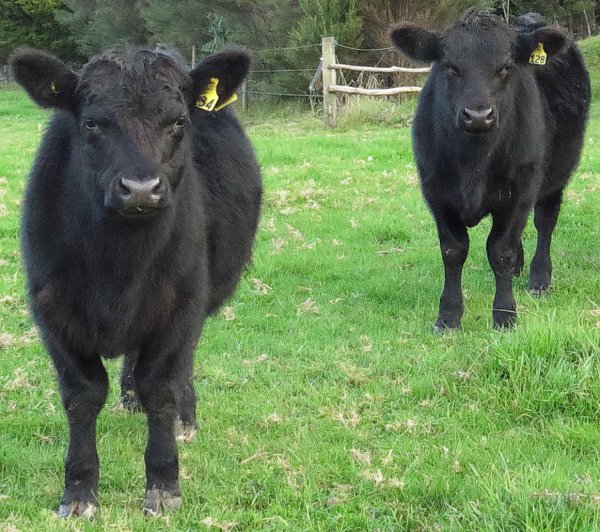 I wasn't sure how Emergency's son (134) would turn out (being the smallest of the four), but he's been looking rather nice lately. 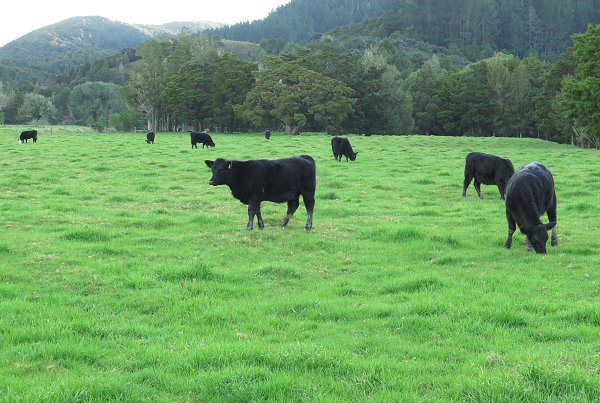 Lovely rising yearling heifers in a paddock of lovely grass.

I am "a woman of a certain age".  All women, if we're lucky, go through the process of menopause (lucky, since dead is usually a less attractive option).  My recent reading has revealed that the process begins a few years before the point at which one achieves that actual status, but few women talk about this significant phase in our lives.  For some reason it seems to be some sort of almost shameful secret from the wider population, so that those of us who are in the midst of it can end up isolated from each other at a time when friendship and support would be most helpful.  That seems pretty crazy when everyone will have some dealings with it at some point - your mother, sister, partner, friend, etc.

I asked my mother, before she lost the ability to remember such details, when this had all begun for her.  I've always considered myself very much more like my Father, but over recent years I have felt myself turning, physically, into my mother and there is usually some correlation between a mother's menopausal process and that of her daughters.  Jill commented on some noted changes from the age of 46, which, in retrospect, matches my own experience thus far.  She now can't remember how long the whole thing lasted.

Things have been going a bit haywire for me for a while in some respects, but as I don't usually have to be anywhere in particular or work to anyone else's timetable, I can make allowances as necessary.  If I can't sleep one night, I can take it easy the following day; if I'm so cross I want to strangle somebody, I can stay away from people - and I suggest to Stephan, at those moments, that he stay well away from me, since it's not about anything he's doing; if I have pain, I can usually take things easy until it passes.

I very much enjoyed an interview with the writer of a new book on Menopause issues, Jean Kittson, on Radio NZ recently.  I think I shall like her book.

I remember as a child, travelling in the car with my parents in to town and being shocked by a conversation between them about some aspect of menstruation.  One's parent's unease with such topics is probably how we learnt that some things were "secret women's business" and my mother passed on her own discomfort about such things to us.  Her own parents kept everything secret, especially anything to do with health issues.  It is hardly surprising that some of this current generation of daughters still struggle with silence around such matters, our fore-runners being of that far more repressed generation.

It was a comment by an older friend a couple of years ago which started me thinking about the issue.  I'd not been aware that some of the seemingly-sudden physical deterioration I felt I was undergoing at the time could be so easily explained and that it wasn't the start of a steady decline into ill-health, but a perfectly normal and probably temporary glitch.  If we all talked more openly about these things, such ordinary processes would be far less surprising.

It rained all day again today and the river levels were very high again by 9pm.  We went out chicken-rescuing again ...  The young hens and their mothers would very likely be high enough in the house part of their cage, but if the cage were flipped over by the water flow, or the water was deeper than expected, they'd be in trouble.  It's easy enough to carry them back up to the lawn.  Stephan has intended to move their cage to a slightly higher area, but they need to be out of the cage for him to do that.

The Intermediate School knitting class walked from their end of town to the other this morning, a distance of 2.4km, to knit in the presence of the interested elderly residents of our town's retirement home/hospital, Switzer Residential Care.  It was an interesting experience.  The kids all sat on the floor in the middle of the room, while we three adults who usually assist them did so, but also referred them to those women who were there with knitting themselves and looking to help the youngsters. 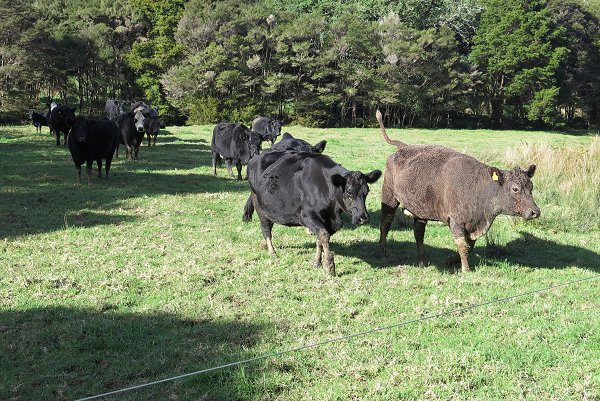 The rather reduced cow mob.  There are 16 of them, ranging in age from Demelza R11 (rising eleven years - eleven at her next birthday in October), to the three R4 cows, white-faced 660, flighty 657 and Dexie 101.  Curly has her tail up for some sort of biological evacuation; she was walking, so probably defecating.  They stand still to urinate. 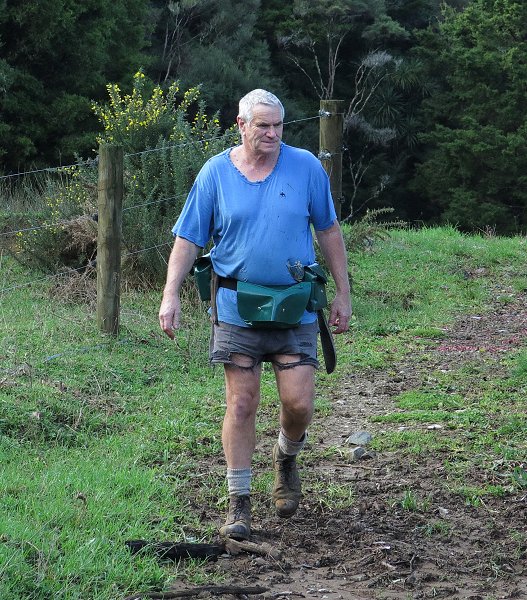 Stephan will not like this photo, but we don't hide from reality here!  ACC (the Accident Compensation Corporation, to which we all pay levies and which supports us when we have accidents or injuries) has funded the provision of a belt with pouches to support Stephan getting back to his normal work.  The Occupational Therapist determined he will probably need to use his hands more than he used to, for support when clambering through the bush.

He engaged a local guy to make the belt and pouches.  They're not as tidily constructed as I would have expected, but Stephan says they'll do the job well.  He was off out to do a walk for a couple of hours, to check and service the traps he's not seen for months around the Bush Flat and Big Back Paddocks.  The hardest thing he's doing at the gym now is walking on the treadmill; his toe is still very sore.  Walking ordinarily allows one to limp, but keeping up on the treadmill, apparently, does not.

I've had a migraine for the last three days (well controlled by good drugs), so yesterday opted for opening the gate at the bottom of the Big Back Paddock for the pregnant heifers to come down to the Bush Flat Paddock, instead of climbing the hill to check on them all.  Today I went to make sure they were all there and discovered 721 in the bush reserve!  This is not the first time and this time she was in a narrow-enough area to chase back to wherever she'd come in.  Cattle in the wrong place, if they're moved quietly enough, will usually return to wherever they broke through to get back out to where they ought to be.  I watched her clamber over a big Puriri's low branches to get down to the flood gate at the end of the reserve and push her way out under it.

An animal which has found a particular weakness and repeatedly uses it poses a problem.  721 first got in here as a calf just after weaning, was in here in February when Stephan was injured and here she is again.  The flood-gate is in good order, but it looks like we'll have to put some electric wires across there to deter this habit.  I haven't discovered her trying it on anywhere else, thankfully. 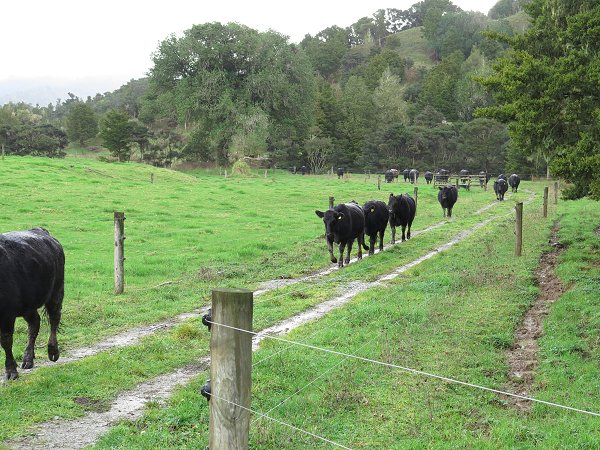 I decided moving them would be prudent, so opened the gate and called them out of the paddock.

The heifers happily followed me along the lane from the Bush Flat stream crossing and turned into Mushroom 2 (to the left in this picture).

As usual, Gem 698 was one of the first couple of animals in the procession and I looked to see where Meg 699 was.  A heifer came running along the lane, calling: Meg.  I don't always find them right next to each other, but they do seem to continue to have a strong connection and desire to be together.  I think of them as one animal in two parts.