The week beginning the 6th of June 2015.
Saturday the 6th 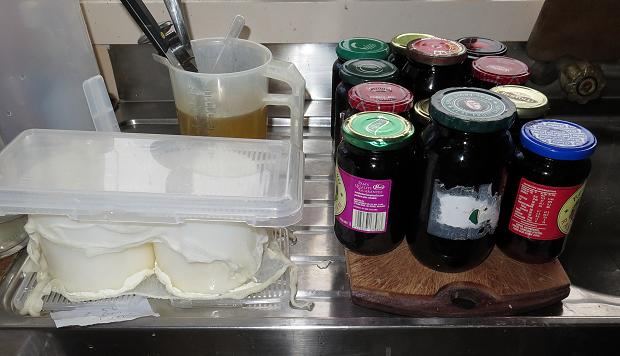 While I sat writing this morning, Stephan was in the kitchen with a bubbling pot of grape jelly, while gently stirring a pot of Camembert-style cheese in the making. 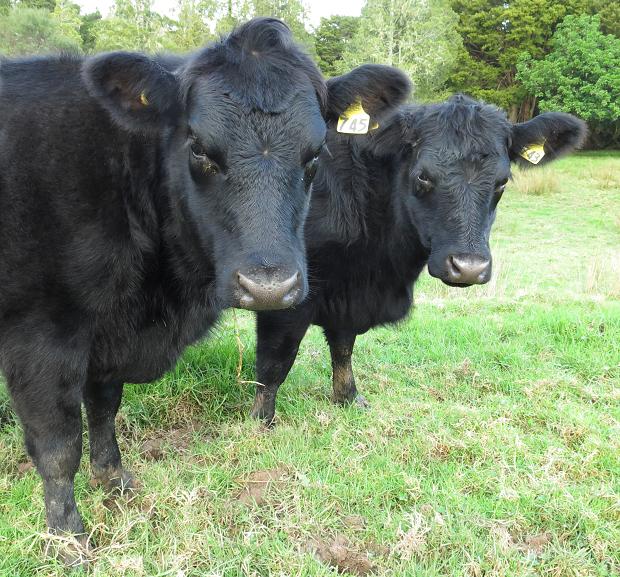 I checked on the young heifers this afternoon, in the Tank paddock.

Here are 745 and 743.  While a lot of my cattle are becoming quite closely related, these two are still interestingly different, with only one common forefather, Schurrtop Reality X723, twice in 745's pedigree and once in 743's. 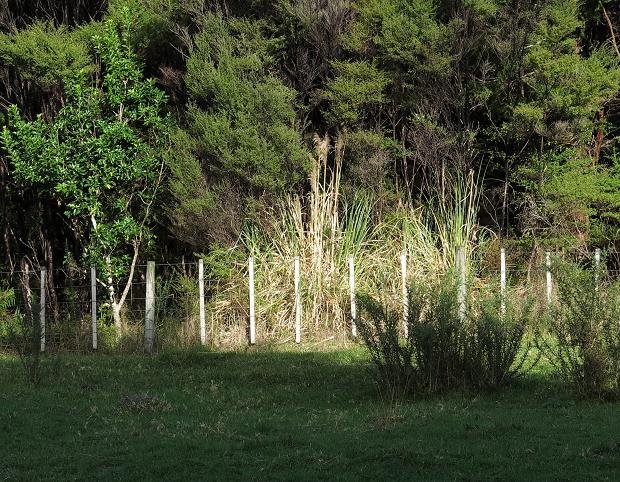 While the cows watched me forlornly from the bottom of the Small Hill paddock, from which they obviously thought they should be moved, I walked around the Bush Flat with the GPS unit, recording the positions of all the fence posts.  I'm trying to get a more accurate area calculation of all the grazing areas, especially since we've changed such a lot of fencing.

The bigger Pampas plants I wiped with herbicide back at the end of February have only been partially affected.  I'll probably have to come back to them again, but at least they've not been able to continue flowering properly. 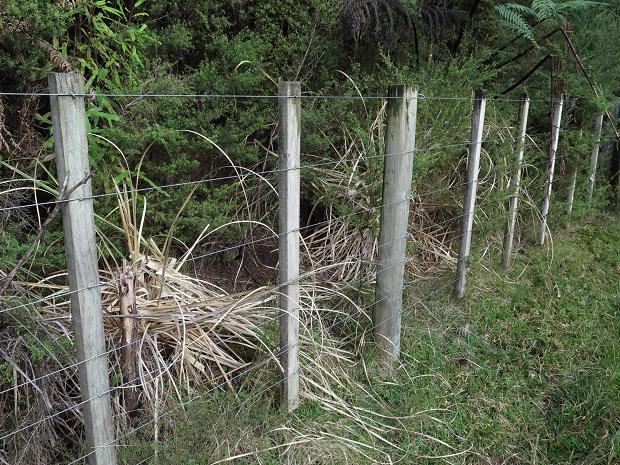 The smaller plants responded well and are now dead.

Most people who fence off riparian margins have to plant them to help control weeds; we're very lucky that most of the streams have old trees along their banks and new plants like this young Cabbage Tree continually appear on their own, the seeds dropped by roosting birds. 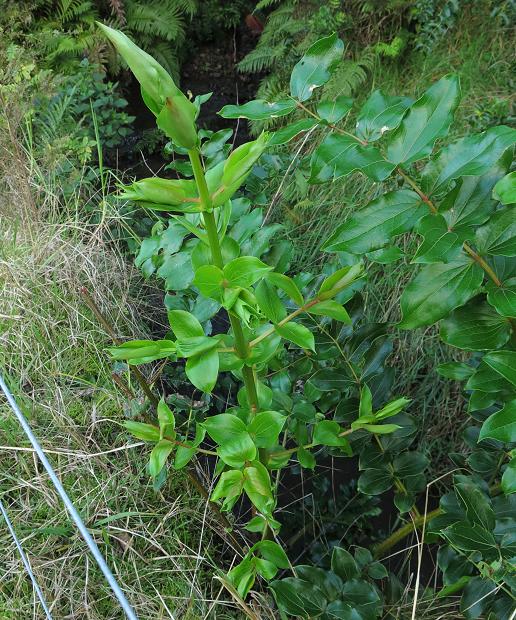 This is the toxic plant, Tutu, which I think always looks vigorously vicious when the young shoots come up like this.  Tutu is appearing all along the streams where it was presumably formerly kept nibbled down by the cattle, who appeared unaffected by it.  I would not like them to have access to as much at once as now grows there.  I think they were alright with tiny seedlings which they ate before they were able to grow to any size, which kept the plants under control.  I'm not overly concerned about their presence, but occasionally trim back a plant if it begins to hang over a fence where the cattle could eat it. 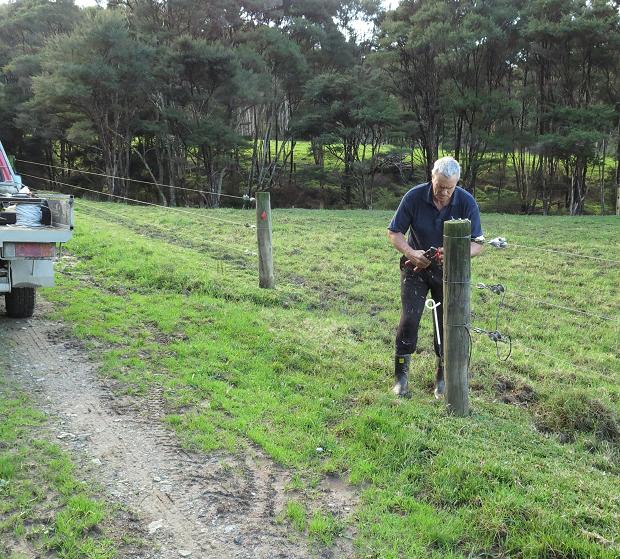 I found Stephan around the other side of the farm replacing the spring gate into the Blackberry paddock, under which some of the young cattle have learnt they can push.  It's a real pain in the proverbial for me when moving them along the lane, when one disappears off under the spring and I have to try and get it out again without the others spotting the opportunity to get in there too.  The spring is now replaced with a criss-cross tape gate. 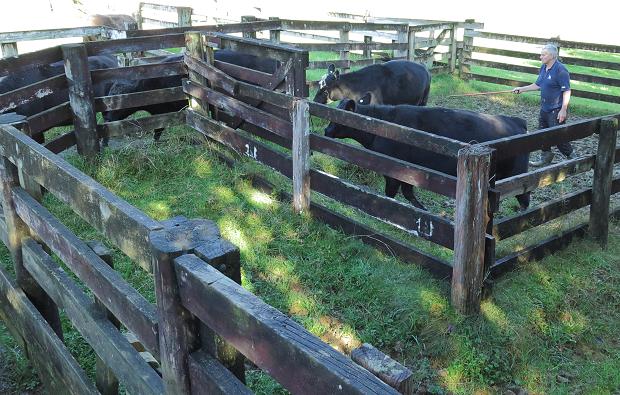 I've kept the scales indicator unit in a warm, dry place in the house for the weeks since I last tried to use it and when we attached it to the load bars this morning, it appeared to be weighing normally.

We brought the R3 and R4 heifer group from across the road and weighed them. 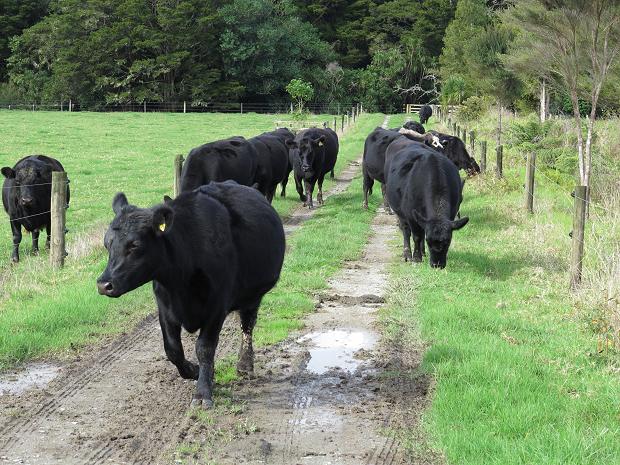 Then they followed me along the lanes and out to the Big Back North paddock. 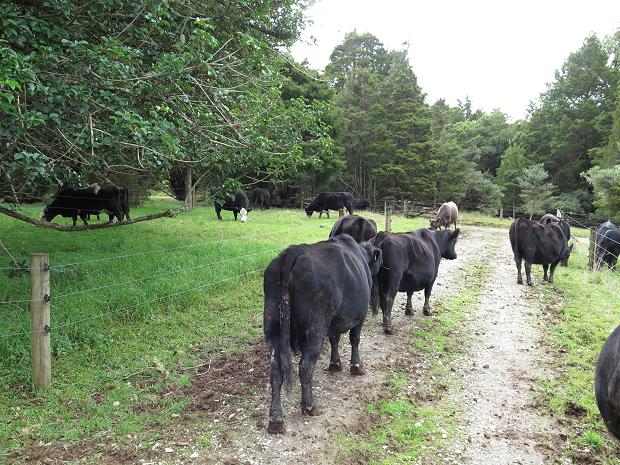 The others went around the corner and across the stream into the paddock which is now part of the old Small Hill and the Pines.

As I worked, I made a decision I'd not really thought much about: Ida 75 is one of the carriers of the lethal AM gene and I kept her carrier son, 128, because he looked so nice, hoping to get some grand-daughters who did not carry the gene.  Ida's most recent calf, daughter Ida 145, is also a carrier and as I'm currently keeping her, I decided it was time for Ida 75 to go.  Testing every year is an inconvenience I'd eventually like to eliminate and so it is my intention to get rid of these carrier cows in time, as they produce replacements who don't carry the gene.

I think that was bull 128 on the right as they moved from Mushroom 1, along the lane past the lovely new grass in Mushroom 2. 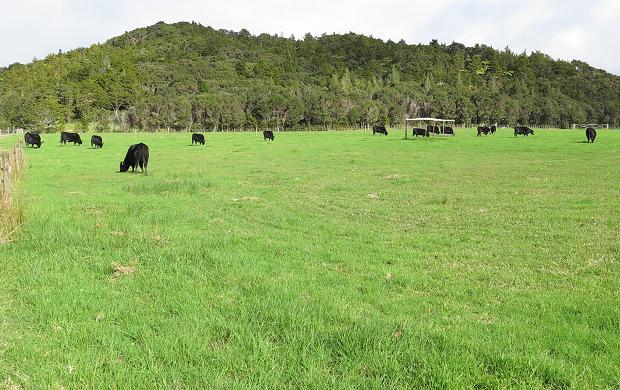 I moved the R1&2 heifers onto the new grass in 5a for the first time.  Some parts of the paddock aren't looking particularly good.  Running over it all with the fertilizer truck wasn't the best thing, but my intentions for the timing of that application were unfortunately overruled by other circumstances.

The compaction of the soil where the truck travelled appears to have depressed the growth of the new grass in places.  There's also the ongoing issue of patches across the flats which are not as fertile as other parts, a problem I'm currently trying to solve. 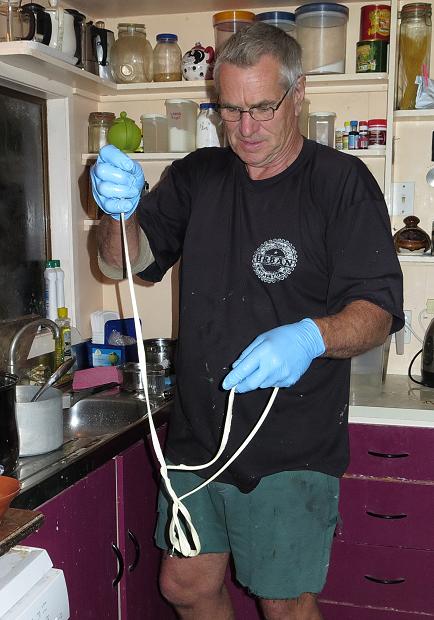 Stephan made Mozzarella cheese this evening.  It's fun watching this part of the process as he gradually stretches it out - I always imagine he'll start skipping with it as if it's a rope.  Thankfully he doesn't. 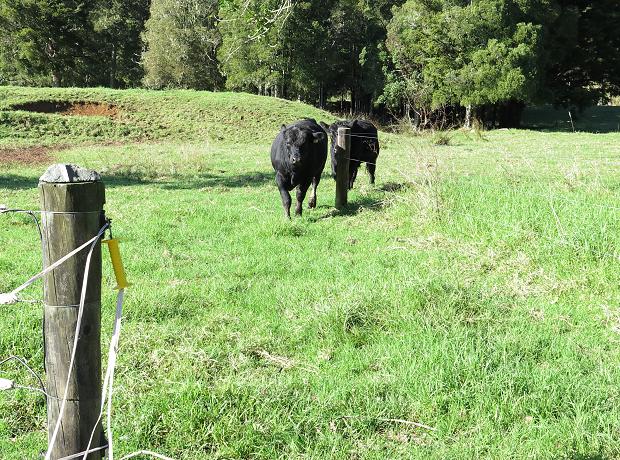 The cull cattle are to go away tomorrow, so I went this morning to get the two bulls to go with them: Imagen's 133 and Ida 75's 128.  They saw me come to the gate and walked across and out, without any bother at all.  The others were all in different parts of the paddock and didn't notice, which made it really easy.

I walked them down the lane and into Flat 1 with the cows, where they all had some entertainment, sniffing and meeting each other again or for the first time. 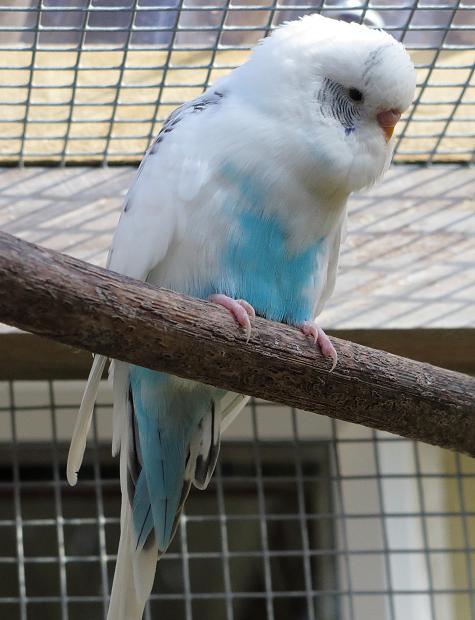 This budgie has been ailing for a while.  I have wondered whether when it came here it was still very young and not quite flying properly.  It fell to the floor of the aviary several times in the first few days and I suspect it hurt itself and might have been sitting so quietly for such a long time as a broken bone was mending.  It's hard to know what to do with a very light, small bird, as long as it isn't obviously dying.  In the last few days it has begun singing again, which is an encouraging sign. 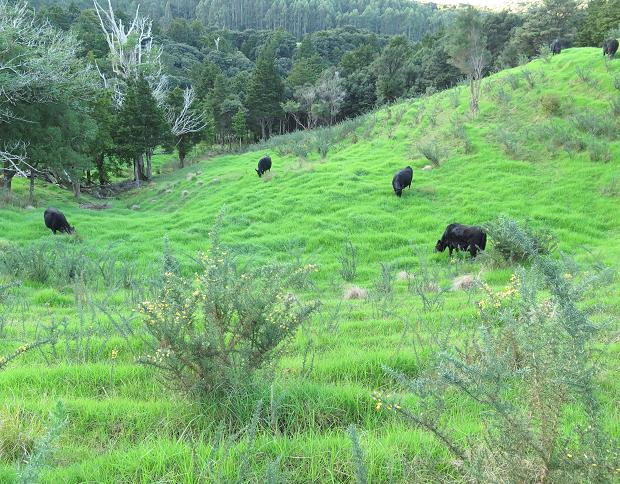 This afternoon, at the end of a lovely, sunny, still day, I walked to the top of the Big Back North, calling the heifers to follow me up and over into the Middle Back paddock where there is oodles of grass.

There's also rather a lot of gorse, testament to Stephan's time of injury last year.  He didn't get much spraying done this last summer either, being absorbed in the riparian fencing project. 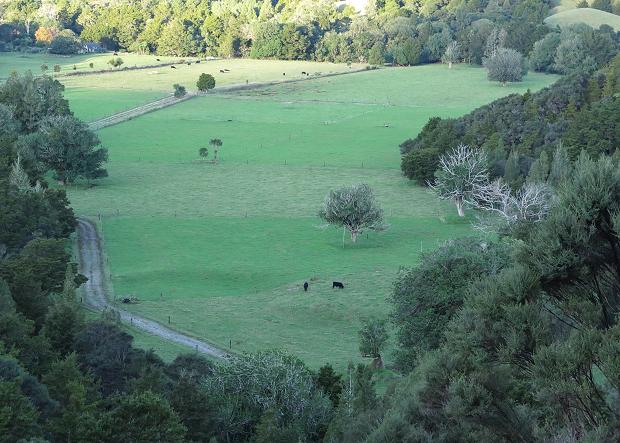 I walked back down the ridge between the Big Back and the Small Hill, GPS-ing the fence posts.

I always like this view down across the flats. 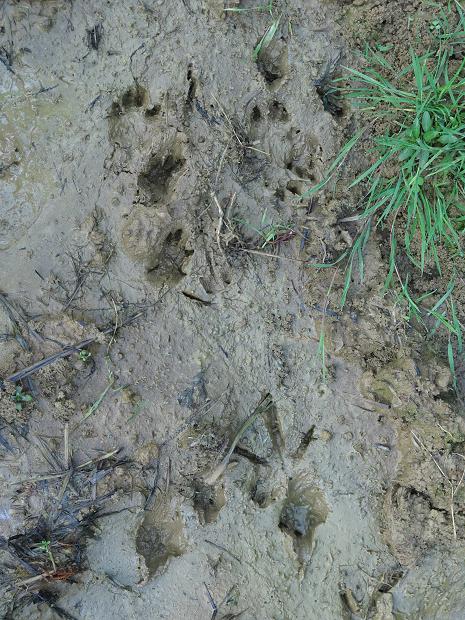 At the bottom of the hill was this strange combination of foot-prints: Kiwi and possum. 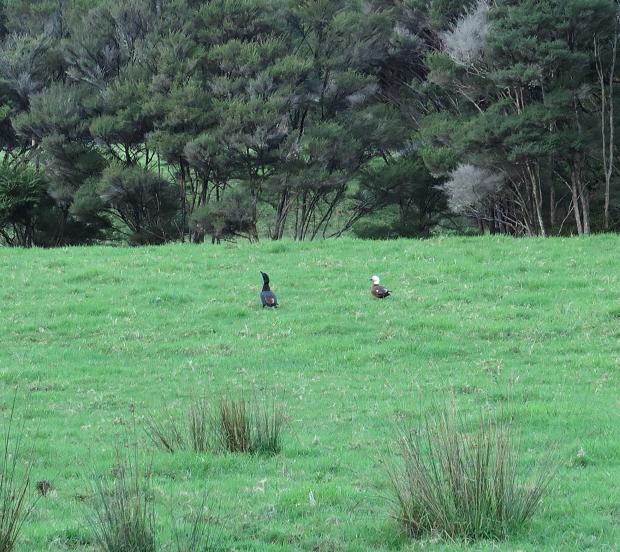 The Paradise Duck pairs are beginning to appear again and they'll hang around now until nesting time in the early spring. 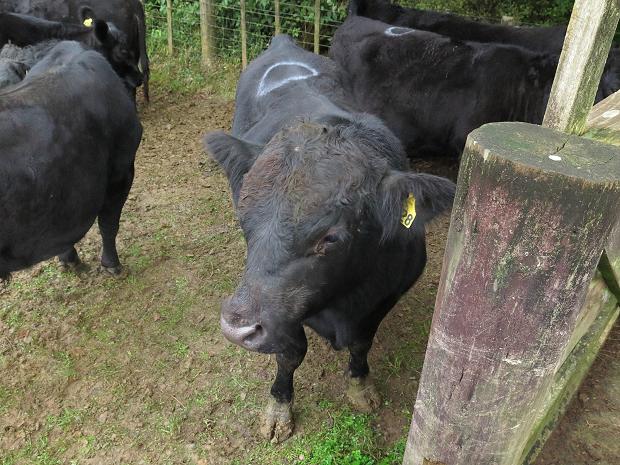 Bull 128, waiting for his truck ride to the works at Moerewa.

I loathe this day in every year, when old, and sometimes young, friends have to go.  I send them to Moerewa, which is the closest works, so they will not have to travel too far.  The other Northland works site, over in Dargaville, would probably be better financially but I find it hard enough knowing they'll be in a truck for two or three hours by the time they get to Moerewa.

Mangonui Haulage also arranged to take two heifers, going to spend the rest of their lives (I hope) with Lilo over in Fairburn, to drop them off before the truck goes south, so thirteen cattle went up the ramp this morning.

I spent the day feeling horrible and while making butter in the late afternoon, got a migraine, just after I'd decided it was entirely pointless to worry about the animals any more, since they'd doubtless have arrived safely at the works.  It turned out later that by that time they'd already all been killed and so there was no need to worry about them any more at all.  I know how the works deal with them, so it's not distress about how they're handled there, nor about their actual deaths, just that I hate them having to go away into so much unfamiliarity and noise and I imagine too much of their possible distress about those aspects.  Death comes to us all at some point so that doesn't bother me greatly: I think that after it does, whatever one believes happens next is either unimaginably better or nothing at all, in which case being dead won't matter.  Sometimes being dead can be better than what might otherwise have happened. 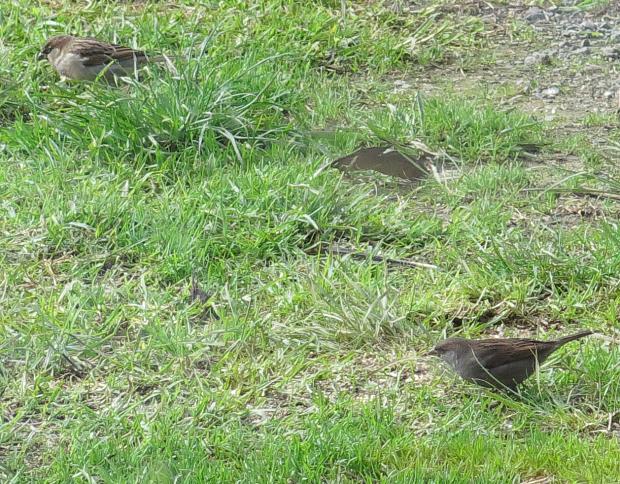 This very dark-coloured sparrow (bottom right) was amongst the flock which are hanging around the house at present, scavenging anything the budgies throw out of their cage and sneaking in and out of the little chicks' cage to eat their food.

A regular reader, Hannah, later emailed to suggest it could be a Dunnock or Hedge Sparrow, as opposed to the usual House Sparrows we have everywhere here. 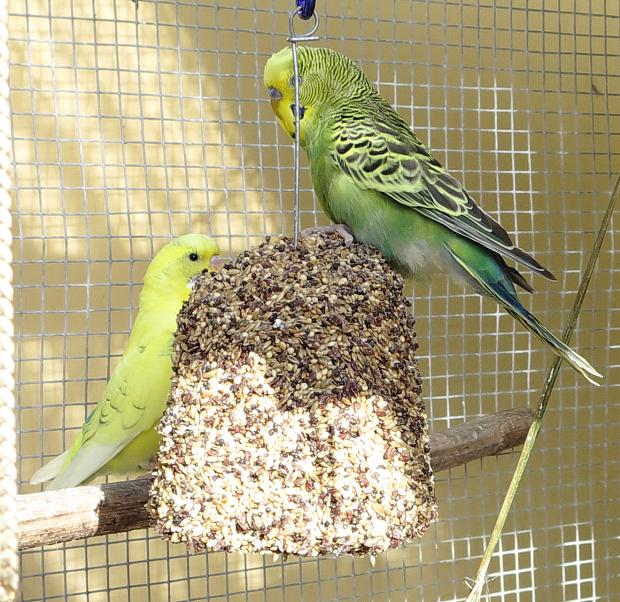 When Lilo and Peter were here on Sunday, they left a gift for the budgies in the form of this seed cone.  Since then the birds have spent every day on it, devouring it so quickly that half of it has already gone.  They are really enjoying it, but I don't think it would be a terribly cost-effective way to feed them all the time. 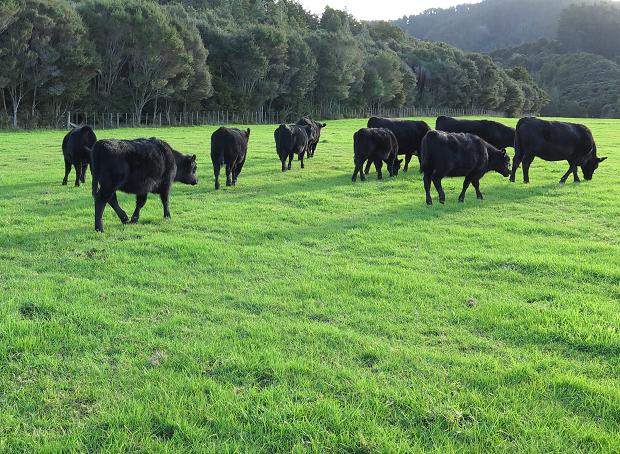 The young heifers went into the new grass in 5b for the first time this afternoon.  The grass plants are still very small, but once they have three leaves I understand it is best to graze them to encourage tillering, so each plant will grow more leaves. 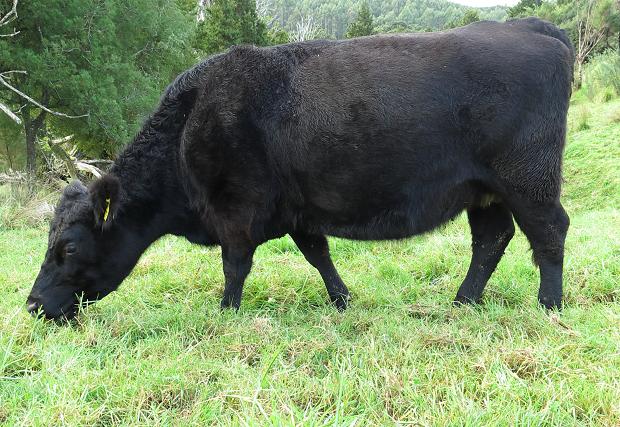 The R3&amp4 heifers are content in the Middle Back.  I think 723 is looking quite a lot better than she did a few weeks ago.  She has gained around fifty kilograms between weaning and now, making her appear a little more substantial than she did.  She may not make it to a nice smooth fat covering this year, but her family history indicates that she should come right in time, if I can keep feeding her well enough.

This evening we went out to a restaurant dinner with Elizabeth and William, to celebrate the completion of the riparian fencing project.  I had also, at the last day of the Understanding Your Farming Business course, undertaken to have finished my 90th magazine column by today so that dinner could celebrate that too.  I spent most of the day writing and finished and sent it off.  I've now had around 140,000 words published; I think that's enough for a longish book!  Nearly seven years of writing a monthly column and only just, finally, getting on top of my procrastinatory habits.