The week beginning the 23rd of July 2016.
Important: if you are kindly about to show this page to Jill, please don't.  Take her back a year or skip to the next week.
Saturday the 23rd

From the kitchen window I watched the aviary this morning, seeing one of the young hen birds receiving some particular and repeated attention from one of the males ... and then a queue formed and four of them were at it!  Feathers flew and little hen bird fell off the perch and flew back up for more.  But later, when I checked, I saw she had bald patches, had lost her tail feathers and looked a bit tired, so resolved to separate the sexes.

Stephan installed a door he'd originally built for the Switzer budgies' cage into one of the internal doors, so I could catch all the males and pop them through into one section.  It worked very well.  Now, in the other side, are all the female birds and the pairs raising their chicks in separate cages.

Stephan went around earthing any gates he'd missed, today, after I came home swearing about another electric shock off one of the ones he thought didn't need doing.  Just because he can't measure a voltage on a gate, doesn't mean it won't give me a shock! 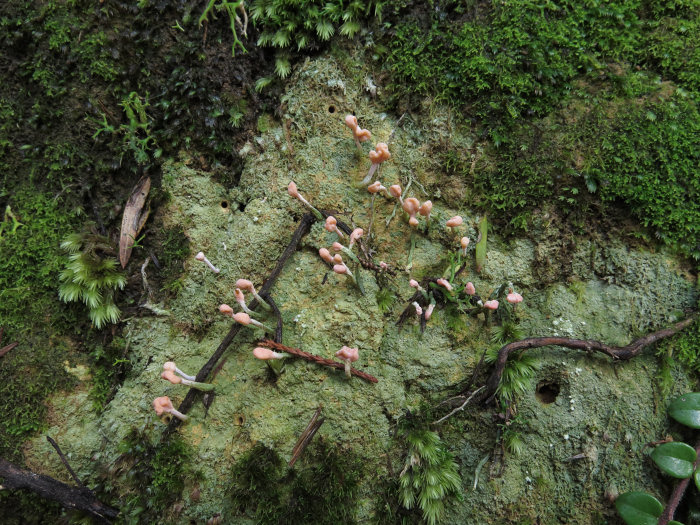 Cute, pink fungi, growing out of a vertical bit of clay bank in a shady place under some trees. 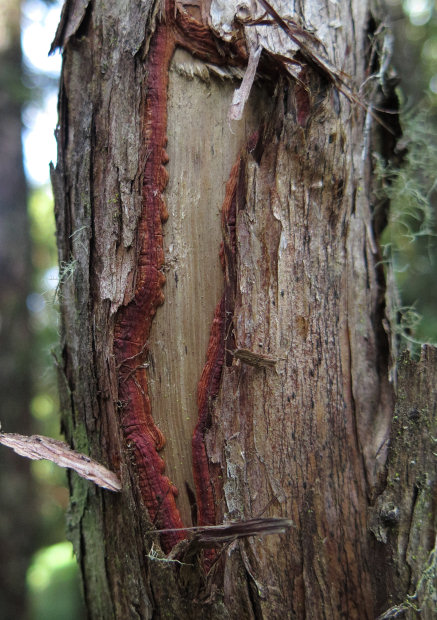 Near them this Kanuka tree with a healing wound where a branch must have been torn away during Stephan's fencing work last year.  What fabulous colours. 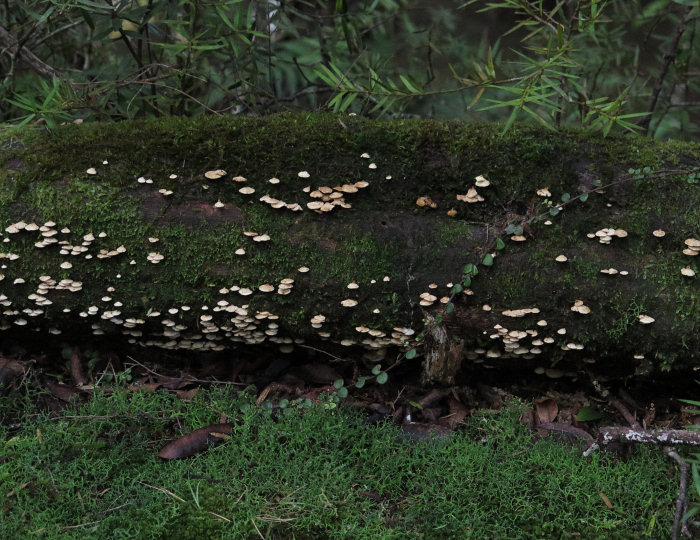 And more fungi, growing on a fallen branch on the bank amongst the mosses. 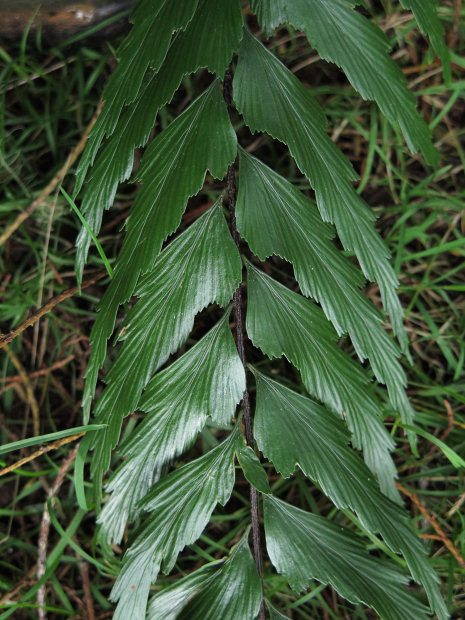 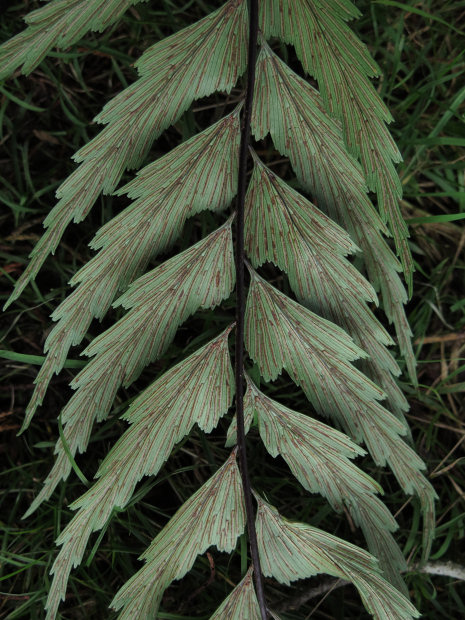 This is a full-grown frond from an epiphytic Asplenium polyodon, the type I found unusually growing on the ground in early June in the PW reserve. 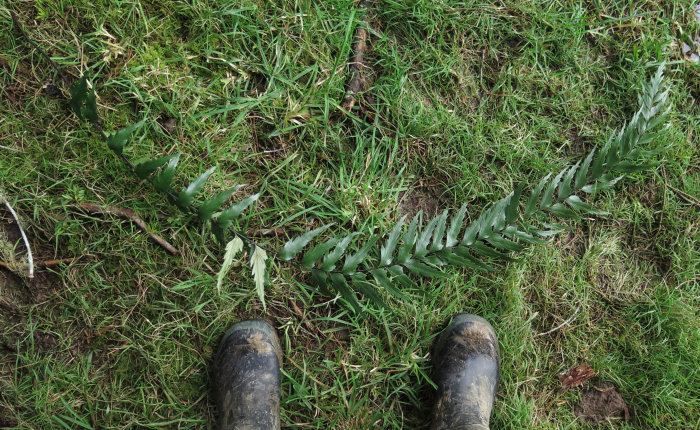 They grow to quite a size up in the trees.  This one had fallen down in the winds of the last couple of days. 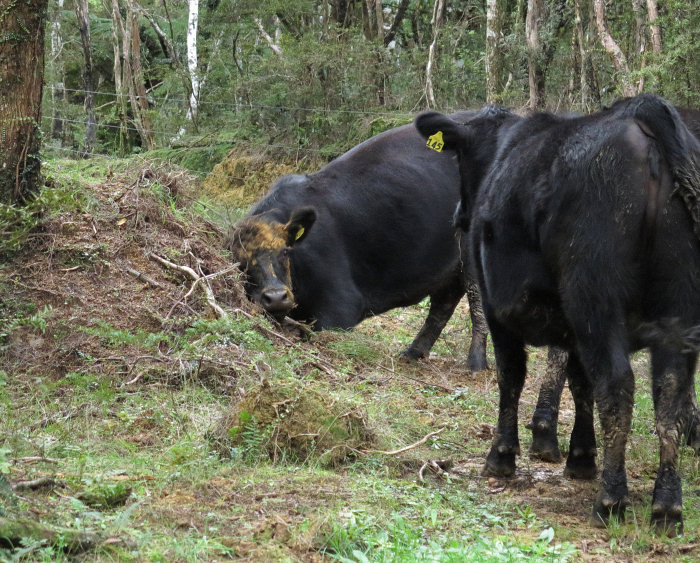 After setting up the gates, I brought the pregnant heifers from the Tank paddock, along the lanes and over the stream into the Swamp East.  743 had a really good rub on the exposed clay banks on her way up the little track into the eastern end of the paddock. 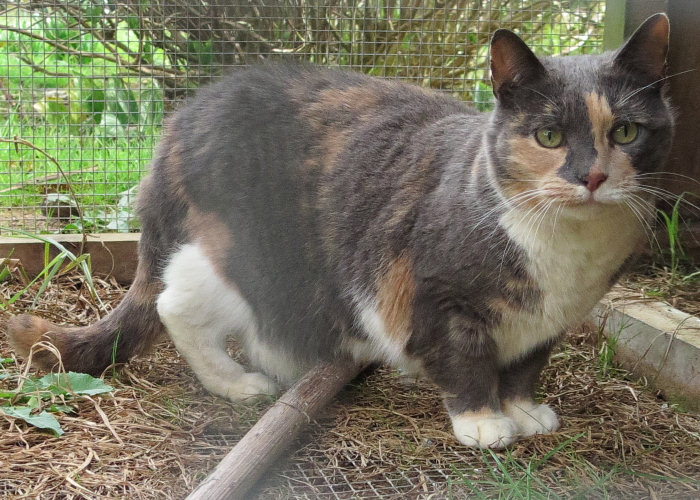 At about 2am I was woken by Floss flapping in great panic in her cage and tore downstairs to see what on earth the matter was.  She'd done the same thing last night but with a storm outside, I could neither see nor hear anything which might have disturbed her.  But this morning I opened the door and heard a cat!  It came toward me when I called and to stop it wandering away again or continuing to frighten Floss, I put it into the empty aviary on the lawn.

At a more civilised hour we rang and left a message for the neighbours to find out if it were theirs - although Stephan didn't think so, that cat being not nearly as friendly as this one and, he thought, long-haired.  I rang the vets and one said they'd accept it later in the day for surrender to the SPCA.

In the mean time I fed it several pieces of last night's lovely bacon-and-egg pie, which it wolfed down in an apparently ravenous state.  The rest of the time it climbed all over me and enjoyed a great deal of stroking.  If I didn't have so many birds, I'd consider giving such a cat a home but we've cast that die now.  And if it had been a nasty-natured cat, it would not have lasted the morning.

When we'd not heard from next door all day, we took the cat in to town, since we had nothing to feed it and it was still obviously very hungry.  During the day the rules had changed about leaving cats at the vet for the SPCA to collect so dropping it off was not quite the friendly interaction I was expecting.  Then when we arrived home, neighbour Trish rang... and came and identified her cat from this photo.  Bother.

It turned out that several days ago they had decided to change where they put her feed but had neglected to tell the cat or to check that it was actually she who ate the food left for her.  Thus the animal was starving and had wandered off in search of sustenance.  In the several years they've lived there, I've never seen this cat!

Ten-year-old Jacob came with his mother and while he was here I asked him if he'd like to see the aviary?  He was enthralled and asked if he could come again, to which I replied, of course he could.  As they were leaving, he said he'd had the best afternoon ever!  We aim to please.

On a stunningly beautiful day, I did a lot of washing.  It's always a bit tricky at this time of year when most days produce at least some rain.  Good drying days are golden.  (In case you live in a city where clothes are dried in electric-powered hot-air machines, out here in the real world we still peg things on lines outside, in the air, where they blow around in the wind until they're dry - and if they're still a little damp, they get hung around the living room by the fire at night until they're ready to put away.) 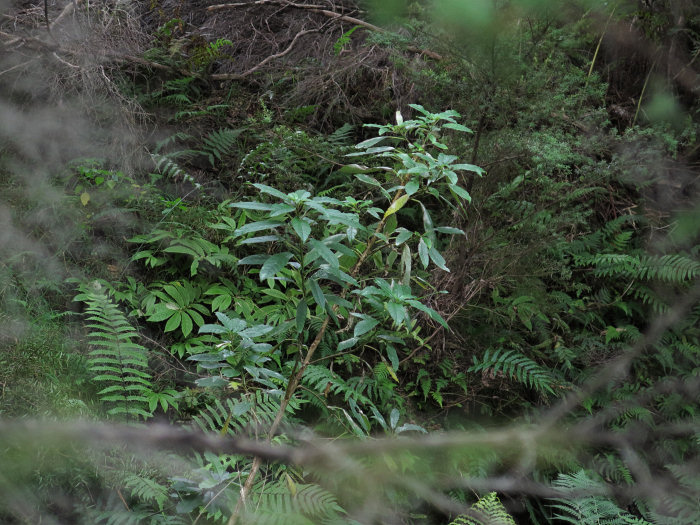 Riding my bike along the lane this afternoon I spotted this interesting-looking plant in the stream reserve between the Swamp and Blackberry paddocks which, on closer inspection of the photo, turned out to be another Fuchsia.  They're appearing all over the place now the cattle aren't chomping them as soon as they grow.  Lovely. 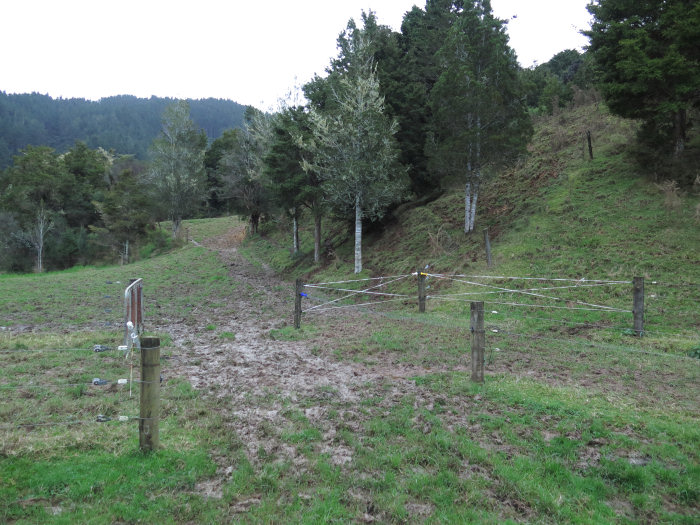 Ick: winter mud.  The cows had just come out of the Big Back North and through the gates to the Bush Flat.  It would be helpful at this time of year if everyone could levitate.

Important: if you are kindly showing this page to Jill, please stop here and skip to the next week.
Thursday the 28th 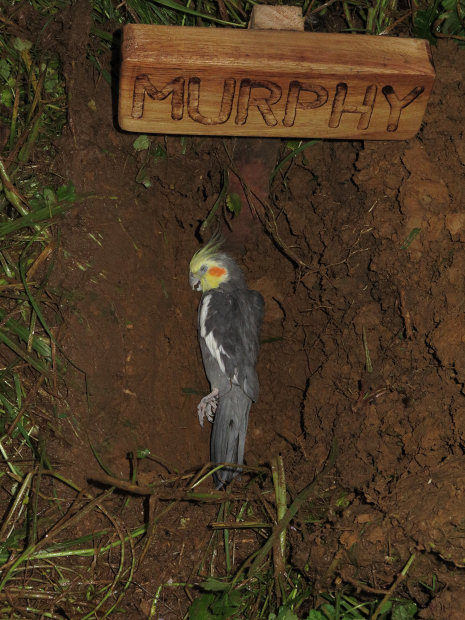 Early this morning I found Murphy cold and dead on the floor of his cage.  Having been woken a couple of times this week by flapping birds in the night, I feel reasonably confident in saying there was no flapping in this case, that it would appear Murphy just toppled off his perch very suddenly, without any fuss.

I have become very fond of this little bird so am very sad that he is now dead.  Stephan made the sign for him during the day and in the late afternoon we buried him under the apple tree where, if Jill ever comes to visit, she may not notice his grave.

Jill sometimes remembers to ask about Murphy but has not done so as often lately, unless I mention him or the other birds.  She believes Murphy will be able to return to live with her when Jude is again resident in Auckland but that was never really likely to happen and now can't.  I have concluded that if I tell Jill about Murphy's death, I will have to tell her again and again and it will distress her every time she hears the news, as if it is new to her and I will have to constantly revisit my own sadness.  So I am not going to tell her and if she asks me about him, I will lie and tell her he's fine and happy.  Anyone else is asked to please do the same.

A couple of weeks ago there was a notice in the local paper about a meeting to organise something for next year's International Women's Day (on 8 March each year).  This being a community where feminism is not something one meets on a daily basis, I thought, yes, I'll go to that!  I walked in to a small conference room with half a dozen women already seated and was asked if I was Ruth from Church Unlimited, to which I replied something like, God no!  That was a good start.

I apologised for potentially stepping on others' sensitivities and as the women introduced themselves, I realised that the evangelical churches have taken quite a hold in our community.  But they seemed willing to accept the godless amongst them and we had a pleasant and collaborative meeting.

I 'don't get out much' as a rule, so thought it might be a good thing to become involved with something like this.  None of the women there were familiar with either of the groups of which I am a member, surprisingly; I would have thought Rural Women NZ was more well-known.  That the Women's Studies Association was not does not surprise me, with its primarily academic and urban membership.  The format for the planned day will probably include opportunities to publicise both. 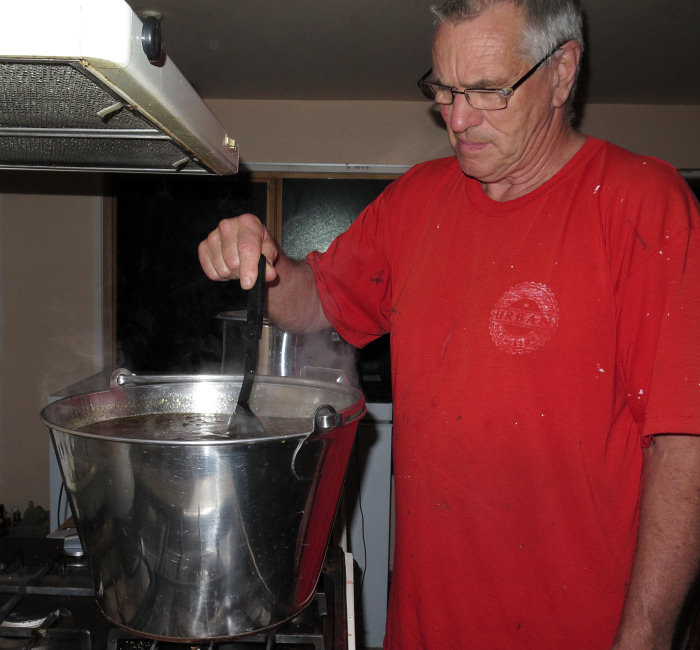 We seem to have ended up with an extra pig in our freezer!  We don't actually have room to keep so much meat because we are now freezing large quantities of fresh milk as we prepare to dry Zella off for the last three months of her pregnancy.  We are trying to have this situation resolved and in the mean time, Stephan has been frantically sorting and reorganising frozen foods.

Last season he picked and prepared several lots of grapefruit for making marmalade, so two lots of that came out and were thawed and cooked and tonight he finished the process.