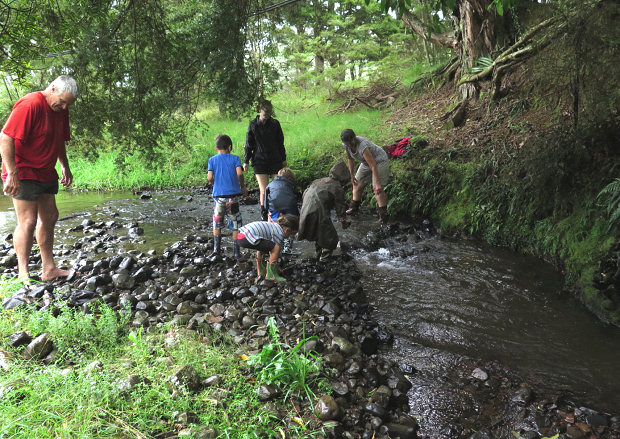 Kerehoma came for his ninth birthday party on the farm, with two friends, AJ and Rehutai and little brother, Maihi.

It rained for much of the day but fortunately that didn't impact too much on their plans for stream dam building. 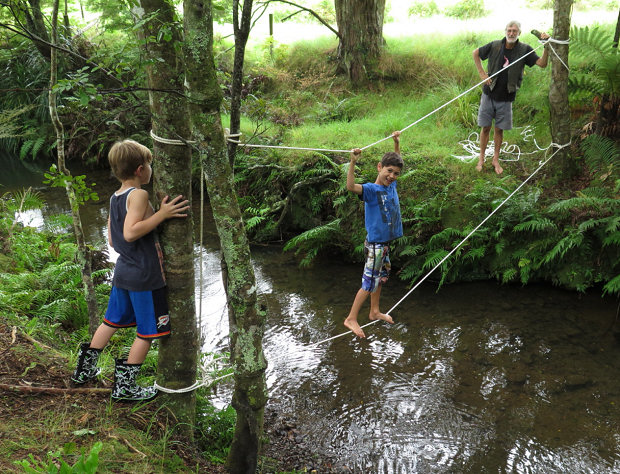 While the boys, Grandma Elizabeth and Sarah slowed the stream's flow, William, Stephan and I went a little upstream and William slung a rope bridge across the water.

It wasn't a long-lasting entertainment but was great fun for the kids to cross a couple of times each.

Then we all went back to the house for swimming and a barbecue, while the rain continued to fall. 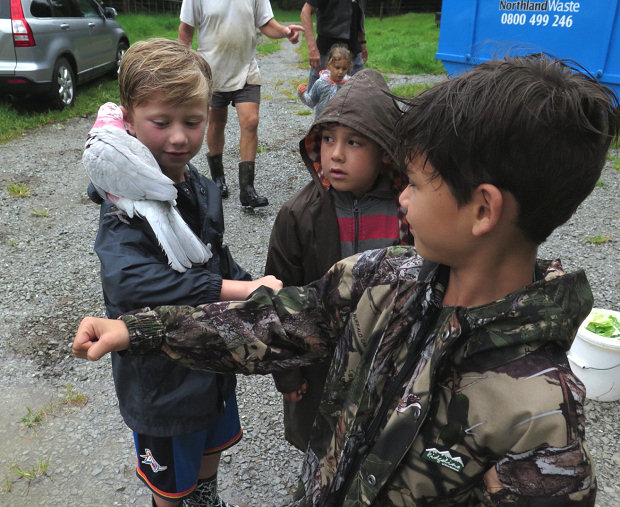 The boys were fascinated by the birds, Floss in particular.  Knowing that she is alright with Louie, Jasper and Stella, I just watched carefully to see how she'd respond to these children, before allowing them to have her on their shoulders.  She didn't rip anyone's ear off or cause any regret. 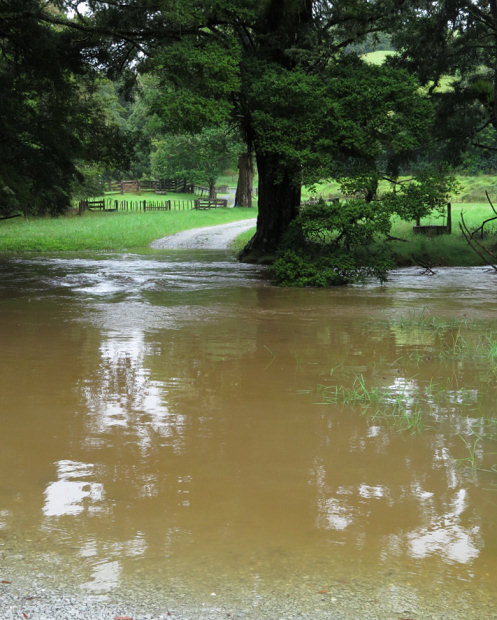 After an extremely hot couple of nights, the rain fell in quantity again, this time over 70mm brought the streams up this high.  February floods used to be a regular occurrence but we haven't had them for several years. 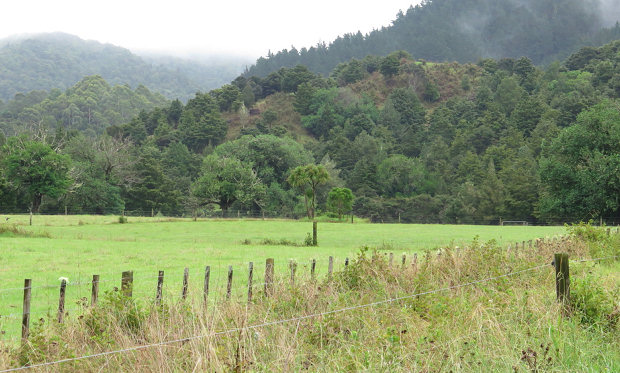 Out on the Small Hill slopes, the effect of Stephan's gorse spraying activity is becoming obvious, lots of brown bushes now showing in the spaces between the large trees. 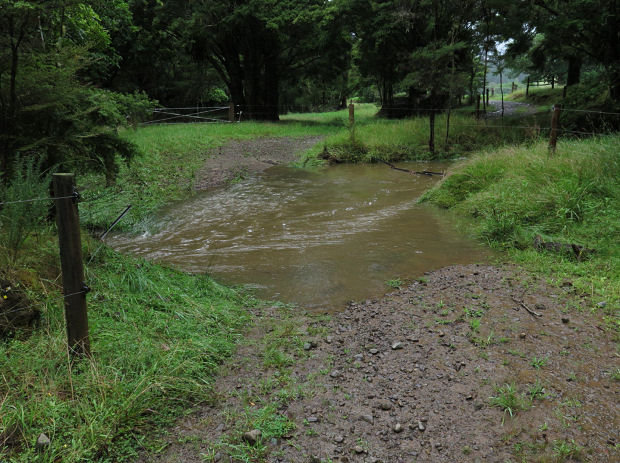 I rode through this on the bike and shouldn't have.  The stream bed was slightly scoured out and my bike dipped down and the engine began to splutter.  We took it to town later and they said the water dunking was coincidental to the appearance of an electrical fault.  I think the two things were probably rather more connected, but I'm glad I hadn't caused any real damage by my ill-considered crossing!  Little sleep during the hot night left my decision-making processes somewhat compromised. 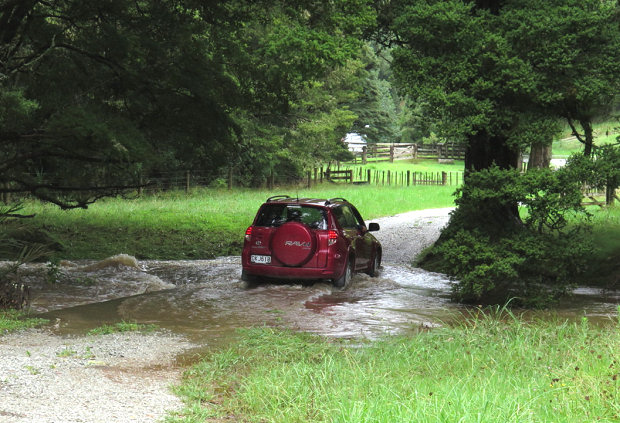 Jane had to get to Kerikeri to catch a flight this afternoon (she usually opts to support the Kaitaia service, but there were no seats available for an emergency trip).  We waited with her for a while at the bridge until it looked safe enough to drive her through, which Stephan then did and walked back as the water continued to drop and Jane went on her way. 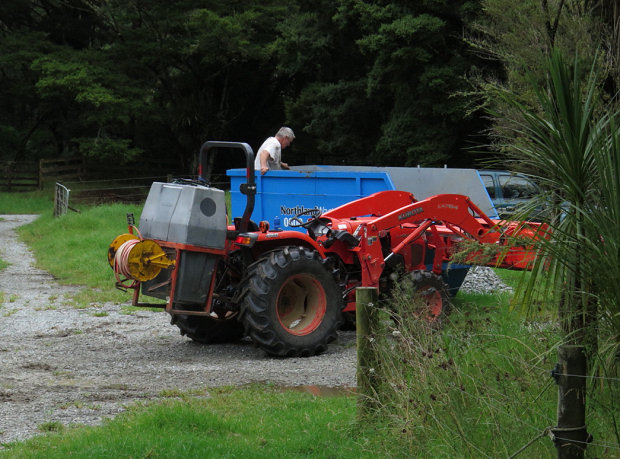 We took delivery of this large rubbish skip last Friday, but it's had nothing in it but water since, with all the rain.  Today Stephan started loading rubbish into it.  I found him stomping things down when I went to see how he was getting on, thought, that's pretty dangerous, considering the probable presence of sharp stuff in there ...

As we were driving to the doctor the following day for a Tetanus shot and some antibiotics to deal with the infection which took hold in his foot after he'd trodden on a piece of wire which punctured his boot, he said, "maybe it's not that I do a lot of things which puts me in danger, but that I do stupid things?"  We may have a breakthrough!

We took the bike and Stephan to their respective Doctors.

Later I had a call from the accountant asking me for the correct stock reconciliations - I'd mistakenly sent them the numbers from last year, getting all confused between 2013/14 and 2014/15, since we're now nearly at the end of the 2015/16 financial year.  I thought I'd been terribly well organised having it all ready the other day.  I then spent the day trying to figure out where I'd made an earlier error the accountant had picked up last year and I had denied could have been the case.  Oh, fallibility!

I thought I'd been working a good system, having every animal on a document which I then copy for the next year, moving them from whichever group they'd been in to the new one to which they belong.  Calves are all R1 heifers or steers, for instance and most of them go into my "sold" column.  The remaining former calves then become R2 heifers or breeding bulls.  R2 heifers either remain as "R2 and older heifers" or become "breeding cows" once they've had their calves.  It's really easy to get things confused and my primary error had been in doing everything a year in arrears and forgetting which animals had been our homekill candidates and I'd missed removing an animal which had been sold as a calf.  Simple, careless, won't do it again!

Another hideously hot night and I was up with a stinking headache in the early hours and watching the approach of the forecast rain at 3am, when Stephan also got up for a cup of tea.  There had been warnings of extreme rainfall intensities, but those are often made and rarely affect us.  We went back to bed and I slept fitfully, aware of the noise outside but unable to rouse myself sufficiently to check on the water levels.  Stephan didn't check either. 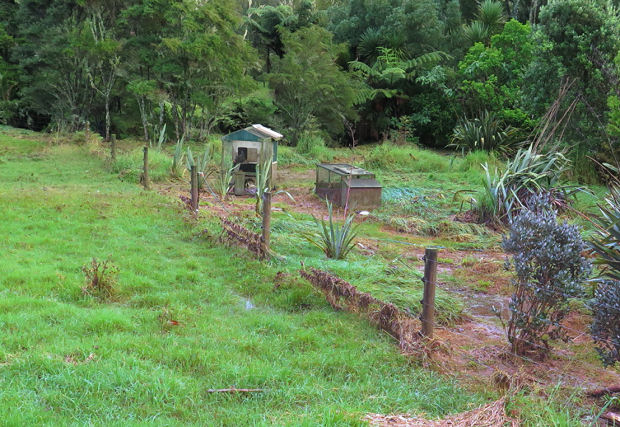 When we did eventually get up, we found we'd missed an extreme event, with fatal consequences.  The big hens with their purpose-built double-story flood-protective run were fine but the little chickens' lower cage was obviously in trouble and there were no birds in the outside run.  Stephan ran down and pulled two drowned hens out of their sleeping area.  I could hardly bear it.

The others would have been very wet but there was some space above the water where they stood, to breathe.  The two drowned birds were standing on a lower perch, even though there was room on the other side of the hutch, at the same level as their surviving siblings.  Naturally it was two hens which drowned and both roosters survived.  I am bitterly disappointed and very sad. 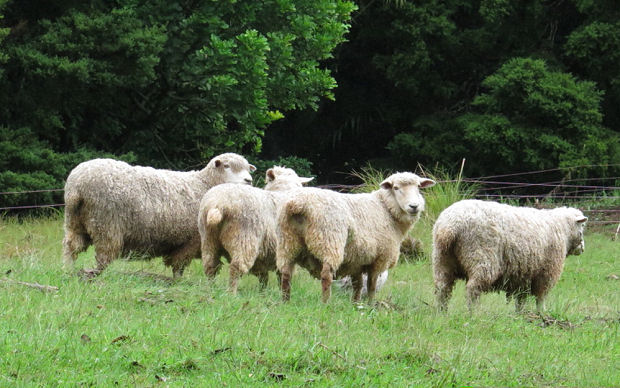 Stephan went to check the sheep and came back to tell me he couldn't find Dotty.  We searched all around the peninsula upon which they normally live, peering at the still swollen stream, looking for any sign of her but she wasn't there.

By the look of the other sheep and the signs of where the water came up and over the area, they must all have had to swim and Dotty, who'd been looking a little under the weather in recent days, must have been caught in the flow, without the strength to fight it and reach safety on the other side.

I don't know that we'd have been able to do anything to save her, had we come out earlier.  The water must have come up in a huge surge in both streams. 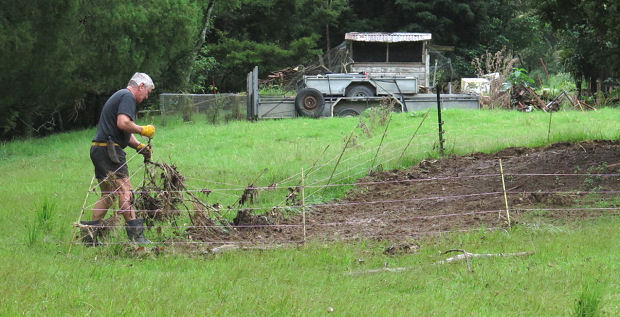 The pigs are fortunately fine, their house being on the highest part of the peninsula but the water washed over the lower area of their current outside run.

(In the background are Roger's trailers, the ordinary small one on top of the huge long one.) 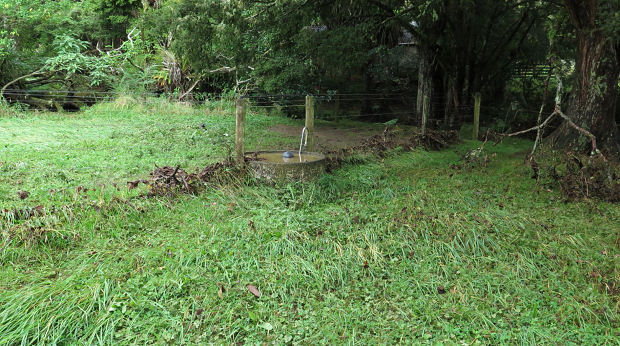 It's high water that floods over the top of this trough.  There are flood debris up in the grassy yard further along the driveway.  This was a huge and damaging event.

Stephan spent several hours re-grading the driveway, moving great piles of gravel which had been washed from the formerly smooth surface.

Stephan went down the road, calling in on our two closest neighbours to tell them we'd lost a sheep and to ask that they let us know if they find her - both because it's Dotty and also because it would not be responsible to leave a body in the river.

A while later one of them phoned and said he'd found her, tangled in debris in the stream.  Stephan went down and they pulled her out, then went back with the tractor to pick her up.

I spent most of the day being ill in bed, which is why Stephan was doing everything. 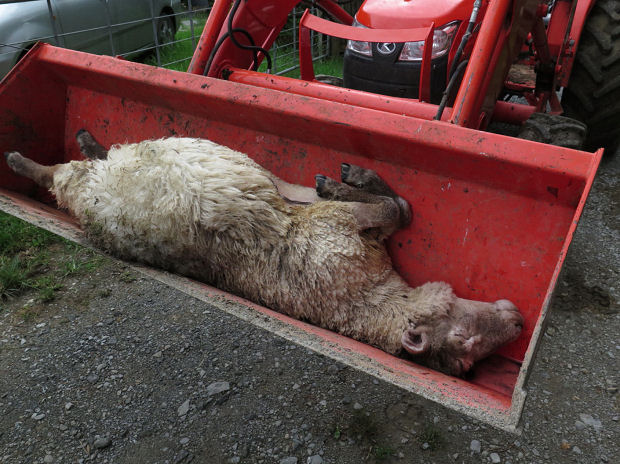 Poor Dotty.  I hope it was quick for her.

We buried her with Damian and Yvette and will alter the fence around their graves and plant another tree there when other more urgent jobs have been done.

I feel very sad about Dotty.  She has always been such a lovely animal, never losing her appreciation for close human interaction.  I realised last year, when Lamb started going down-hill, that being only a year younger, youthful-looking Dotty could be closer to the end of her life than she appeared.  It has only been in the last couple of weeks that I had begun to think about the possibility she may need to be helped to her end.  I did not expect time and tide to carry her away before that decision was made.

Born in 2003 I think my relationship with Dotty has been the longest-lasting of any of the animals on the farm, even Demelza being a month younger than Dotty. 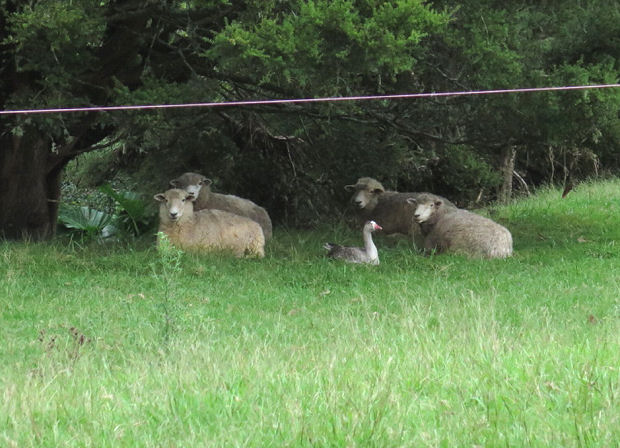 I wondered if Madam Goose would be unsettled by Dotty's disappearance but she seems happy, as long as there are sheep.

(The pink wire across the photo is the electric feed to the pigs' enclosure.) 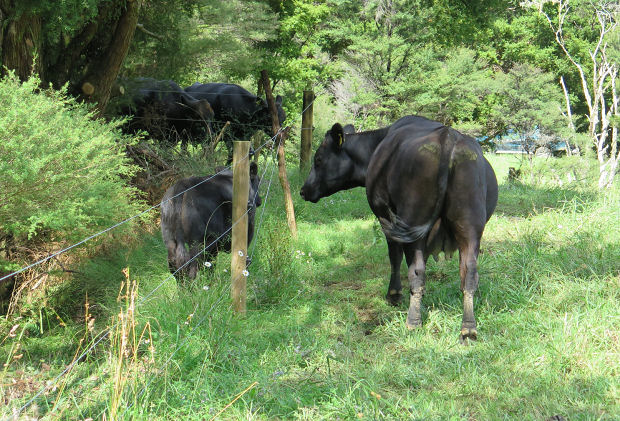 As soon as we could get out the back, we'd opened the gates to the stream for the cows and calves to have water, since of course our supply intake had been washed out again.  This silly calf went under the bottom wire and off along the stream bank.  I had to wait for his mother to come back to somewhere I could prop the fence up so he would go back through into the paddock.

Interestingly his last-year elder brother was prone to pushing under fences where there was any sort of gap, too.  That behaviour really does run in families!

Roger's ute is the blue/green in the background, parked while Stephan went up to fix the water again. 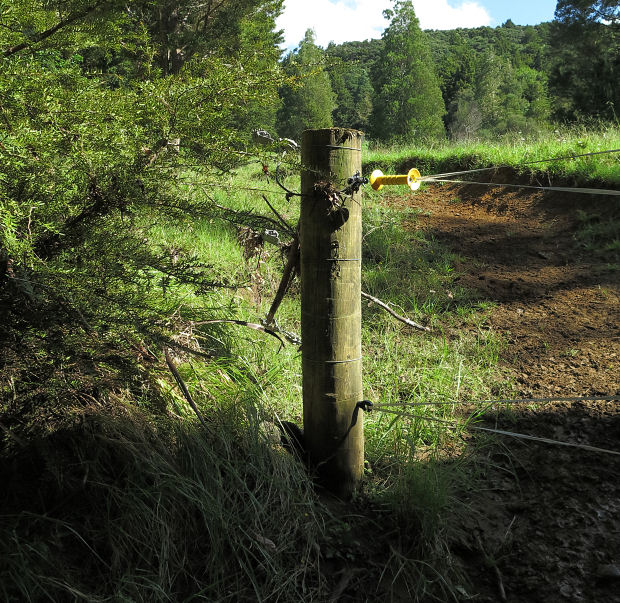 This strainer post on the other side of the crossing leading to the Tank Paddock, indicates why the chickens died: the stream was about 1.5m higher than usual at this point, where the stream bed is quite wide and open.  Where it narrows in so many places, no wonder if flowed out and over the banks which usually hold it.

There is no sign of the children's dam, built last weekend!

Upstream I discovered a salt block I'd carefully covered with a Topmilk bin was now a thin shadow of its former self and the bin had disappeared - Stephan found it a while later, a long way downstream.  All the crossings are seriously scoured out and will require some work to restore them to safe surfaces for riding through on the bike.  Every flood-gate is full of debris.  Stephan is now working around, clearing all the mess.

Emergency was back on heat today.  I don't think I'm quite ready for her to go off on a truck this year, being such a young animal (only 4½ years old now) and being part of one of the farm's significant stories.  On a big commercial farm, not being in calf would be a fatal offence and she'd be culled at weaning.  Here I generally give such animals a second chance.  I used to give a third, but that always bought more trouble.
Emergency has produced three calves so far and is already grandmother to eleven.