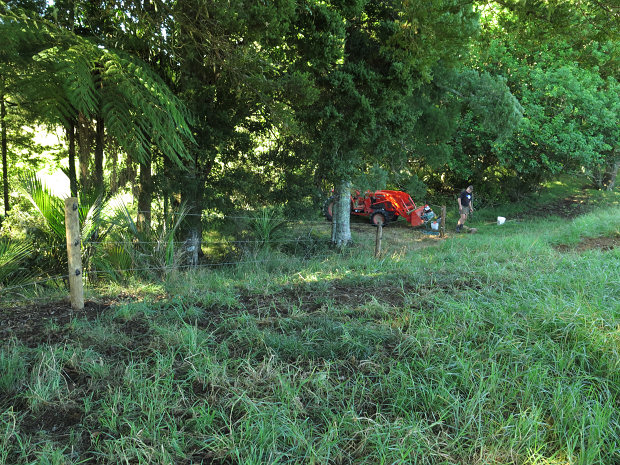 Stephan continued his re-fencing project across the bottom of the flats.  Several of the fences are those which he put in about thirty years ago when he had a load of insul-wood battens (hardwood battens which could be used without insulators for electric fencing).  They may have worked well once, but age and lichen have reduced their resistance to leaking current out of the wires.  There's also been a lot of growth on the stream side of the fence, of trees, Nikau palms and other small undergrowth, so in places the fence needed to be stepped out from its original line. 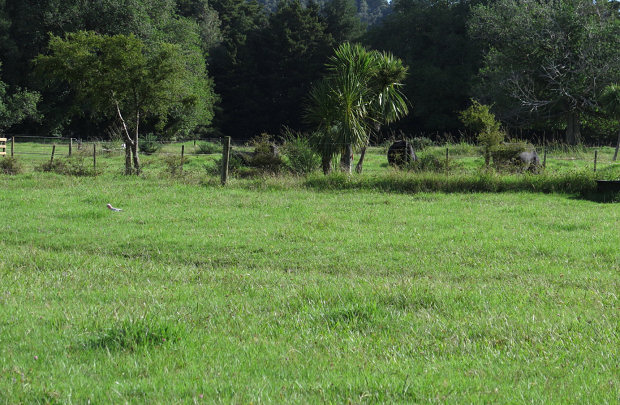 Floss was up the Puriri as usual today but instead of flapping straight down to the ground as she usually does, must have discovered she had more ability and flew straight out and across the House paddock.  I called her repeatedly as she flew, hoping she'd turn or stop.  She dropped down before she reached the other side of the paddock, fortunately, and began walking back.  I went out and collected her, panting with her beak open, wings drooping, barely able to utter her usual "hello Floss" as I walked back.  I'll have to clip her wings!

It'd be lovely if she could freely fly about but I don't know if she'd go further than would be safe, into the range of startled cows or beyond our boundaries into the reach of dogs or passing traffic. 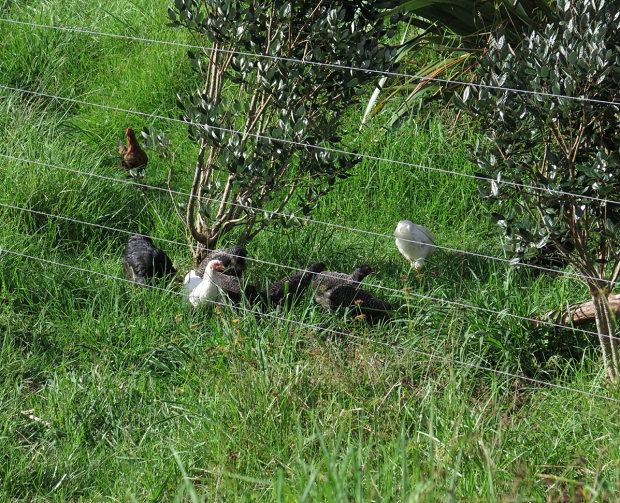 The little chickens are now out each afternoon, enjoying exploring the area around their new home. 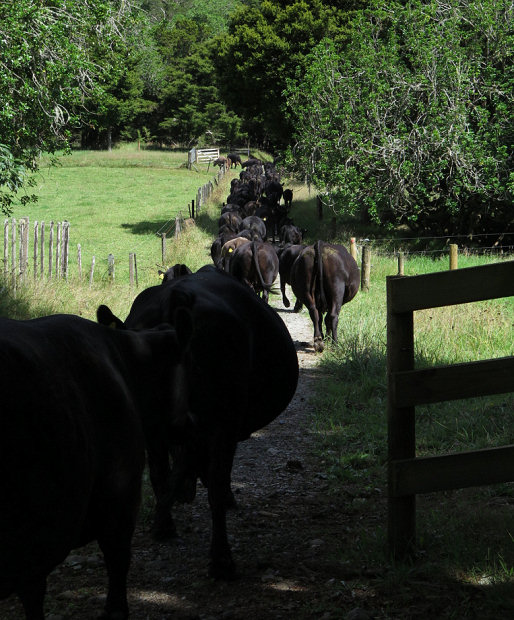 I know, just another cow picture, but I really like watching them move as a mob.  Having started out with a mix of colours, it's been interesting seeing the herd darken to a near-uniform black.

Here they were all on their way out to the PW. 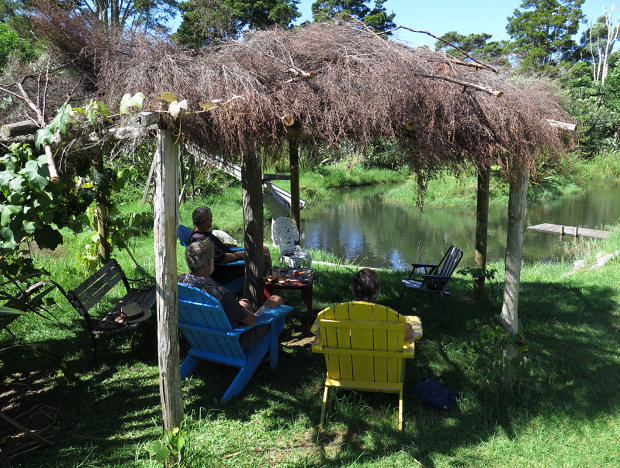 Elizabeth and William came out to go with Stephan to gather some firewood from along the north side of the big swamp in the Big Back Paddock, cut down over two years ago.  But because there has been so much rain lately, the steep hillside was too greasy for the loaded trailer to be pulled up by the tractor.  They left the trailer and all came home again, to sit and relax under the gazebo in the late afternoon warmth. 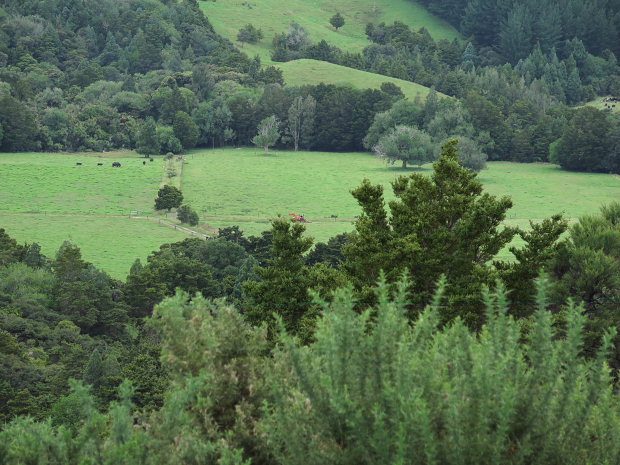 Finding all the cattle in the PW is always an interesting challenge.  They have favourite spots for gathering and relaxing, so usually there are at least some there.  Then I have to figure out which way the rest of them might have spread out across the hillside.  I found everyone except one of the calves and as his mother was calm, left it at that.

Stephan was on the tractor, tidying up the four sections of Flat 5. 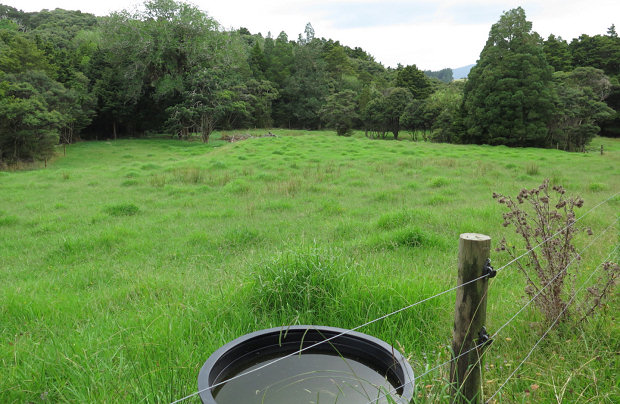 The Kikuyu is really pumping out of the ground.  I can't remember the Frog paddock ever looking this good in summer.

I've mentioned the grass so often because this is such an unusual summer.  Last time we had an abundance of summer grass, we also had a horribly wet and grey summer.  This year has been delightful with its regular rain interspersed with long periods of bright, hot days. 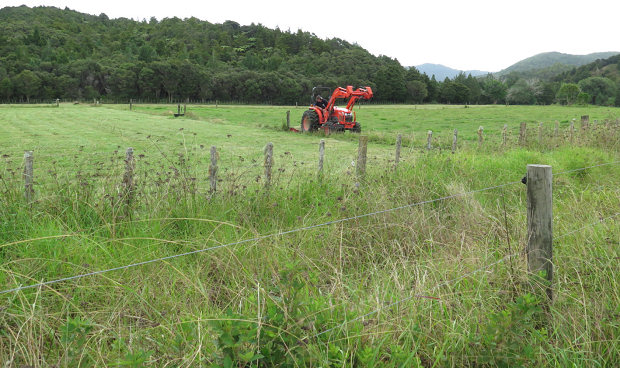 We wouldn't mow this much if the summer was the usual long dry season because the grass left uneaten shades the rest and prevents it getting too hot and dry.  This year though, mowing will allow the grass to grow strongly and quickly for the next grazing.

Feeling some time pressure, I spent the day collating the annual accounts for our financial year which ended last February - otherwise I'm going to get into some trouble with the Inland Revenue Department!  I need to get them to the accountant in time for her to complete our tax returns before the deadline at the end of March. 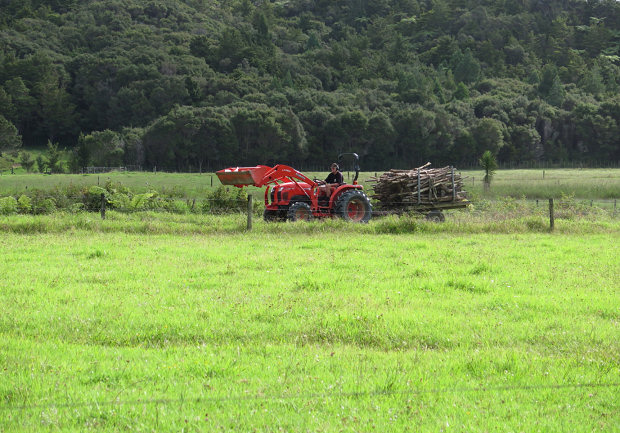 After a couple of days of drying and before more rain comes, Stephan was determined to go and get the trailer-load of firewood from the Big Back paddock.  I was pleased to see him safely returning with the loaded trailer. 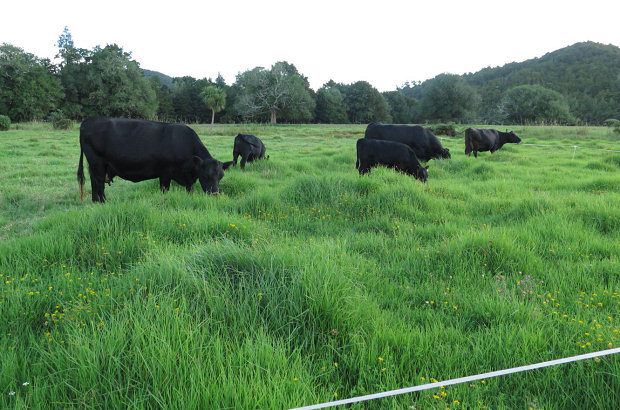 I gave the house-cows a late extra break in Flat 1.  There's not much point saving it for too long or the feed quality will drop, but I want them to stay in this paddock for a few more days yet and if I don't break it, they'll eat the best of it too quickly and want to move before I want them to. 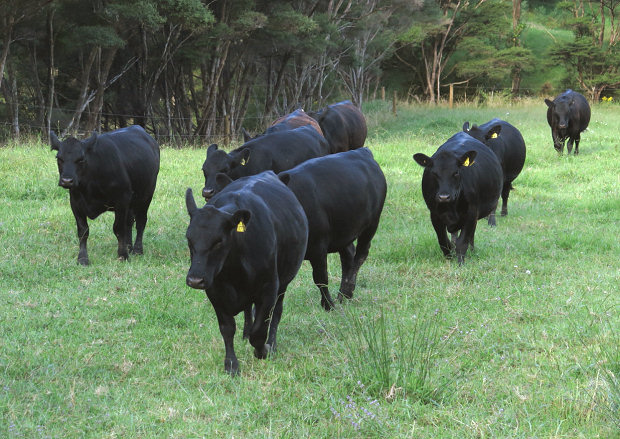 The heifers look like they've really put on a growth spurt.

I always worry that I've miscalculated again, which would potentially lead to trouble next spring when they calve.  But looking this good this early in the year is very encouraging. 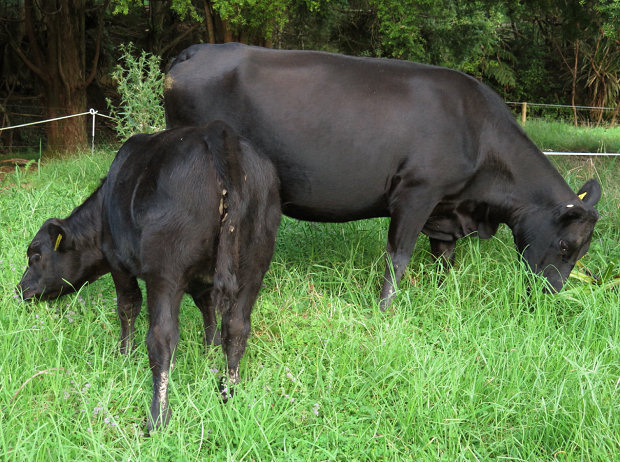 Seventy animals in the PW would have eaten most of the grass by this evening so I called them down from the hill and counted them in to the Frog Paddock.

This is Emergency and her daughter, 150 (must find some more names when I know who's staying in the herd), with her kinked tail.

The electric tape is around the huge Puriri under which the Putangitangi nested last year.  Maybe Stephan has forgotten to come back and do this bit of reserve fencing.

More accounts, all day.  Boring job; someone has to do it. 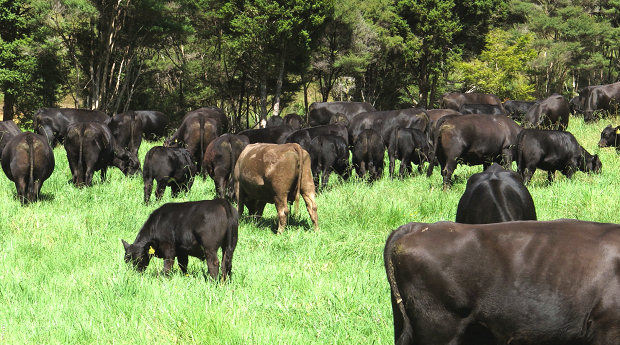 Cows and calves with lovely bums.  I had just moved them in to the Pines Paddock. 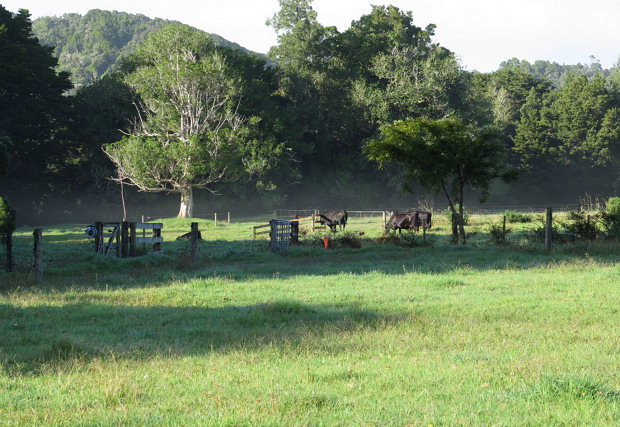 When it hasn't rained for a few days and there is little wind, the dust stirred up by the huge logging trucks comes drifting across the flats from early in the morning.  Lots of people on such roads are complaining about logging-truck dust but I figure it'll only be for a couple of years and it's not a problem every day and I just don't hang out washing during the days it's likely to blow our way.