Ryan arrived this morning, fortunately later than he'd said he would because we'd forgotten he was coming and hadn't got up early enough if he'd been on time.  Stephan went with him in the truck to spread Lime around the Back Barn and a bit of the Swamp paddocks, while I processed the morning's milk. 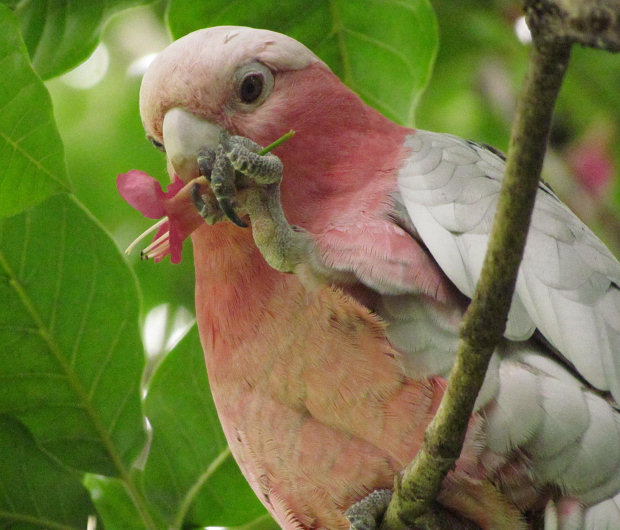 I have no idea whether or not Floss ought to eat things she finds up the Puriri tree, but I feel I must credit her with some sense about her own choices; and she's still alive. 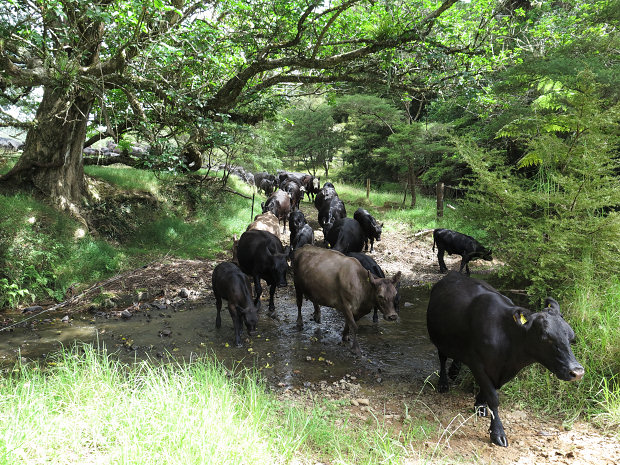 After moving 87 and his mob of 46 cows and 44 calves along to the small Camp Paddock, I drafted the big bull out so he could join the house cows (just in case Zella still isn't in calf).  After they'd eaten all the grass, I took the cows and calves across the stream to the Tank Paddock.

613 is in the lead on this occasion, a cow I've always liked (except in the yards, when she's incredibly difficult to get up the race) but who appears to suffer a lot from the summer heat.  I'm pondering her future and whether I should cull her this year.  She's 7½ years old. 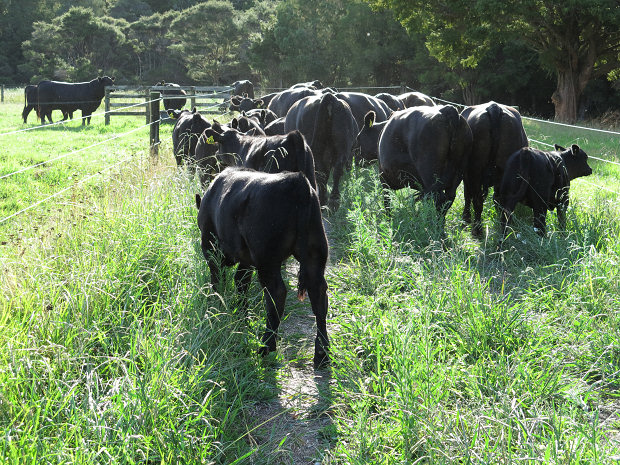 We took the other mob to the yards to weigh them and gave the last calf, 805, her booster vaccination.

As I followed them out to the Big Back South, 797 was always dawdling behind all the others.  His elder brother, 723's first calf, was very much the same: oddly quiet and always at the back of the mob.  They're really quiet little animals and I'll hope for a sister some time.

I went back later to clean the trough for that mob and as I stepped to the back of the bike to remove the big siphon hose I use, my right leg disappeared underneath me, down a nearly bottomless hole in the culvert!  My left leg stayed where it was, ankle and knee painfully flexing beyond their usual limits.  I said some very rude words, mostly with "Stephan" appended to the end, because I hold him responsible for setting these cruel traps around the farm, and gingerly stood up.  My right leg was fine, other than having a muddy shoe but my left ankle felt as though I must surely have broken something and my knee didn't feel much better.  I couldn't really go anywhere for a while, so hopped over to the trough and sucked it out, whimpering in agony - as if anyone was listening.

I'd obviously only strained the ligaments which hold everything together and feel very fortunate everything did!  The pain subsided gradually, enough to limp back to the bike and very carefully ride home.

I think amputation of that leg would be sensible - a wasp sting, a bee sting, a near-fatal attempt on the integrity of knee and ankle joints, all in the space of a couple of weeks! 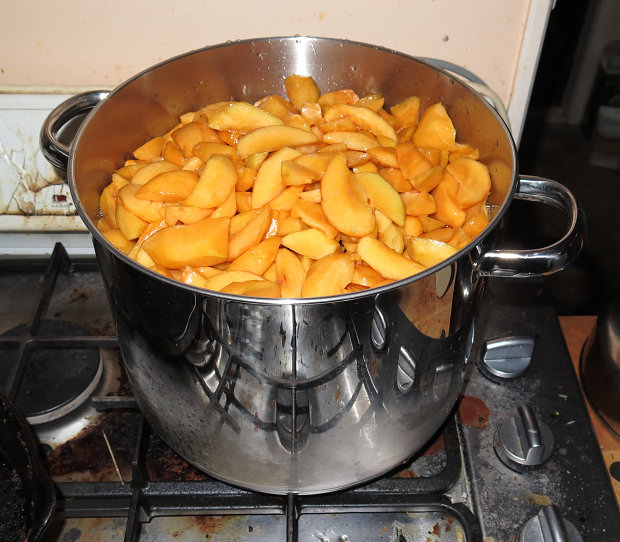 Someone gave Stephan some peaches and as ours appear to be rotting on the tree instead of getting ripe, these may be the only ones he bottles this year. 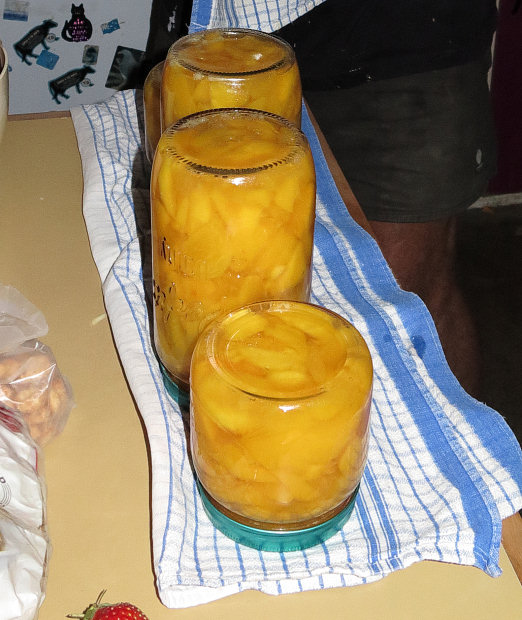 He read somewhere that placing them upside-down after bottling is a good idea - less likely to suck air in as the bottle is sealing, perhaps?  They all sealed; but they usually do anyway.

Still hobbling around, so I didn't do much today, other than go for a very slow and careful short walk around some of the cattle in the evening. 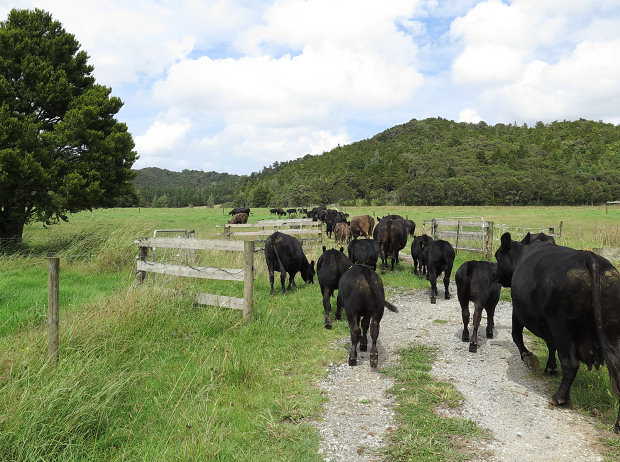 Today I put all the cows and calves together again, making a mob of 70 animals.  Big mobs are easier to manage when the grass is growing well, enabling paddocks to be eaten out quickly, so nobody is left feeling hungry for very long - in a smaller mob, a bullied animal would always be pushed away from the best feed remaining whereas in a large mob, everyone is busy eating for more of the time they're in a paddock, before the next move.

The usual fights occurred for a little while but there was so much grass, most of them settled down very quickly. 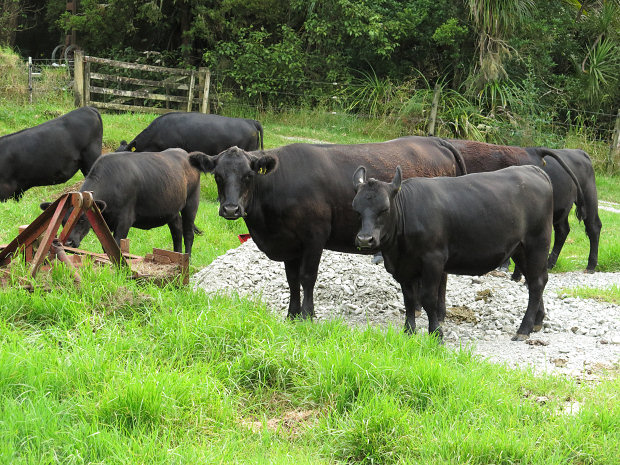 I brought the nine yearling heifers with their year-older companion, Dexie 136, in to spend the night in the Pig Paddock.  Tomorrow 136 has her date with the homekill slaughterer.  The outline of some of her bones can be seen but she's quite nicely muscled and ready to go.  I had thought she'd become a breeding heifer, but she's just too lanky and different from the others. 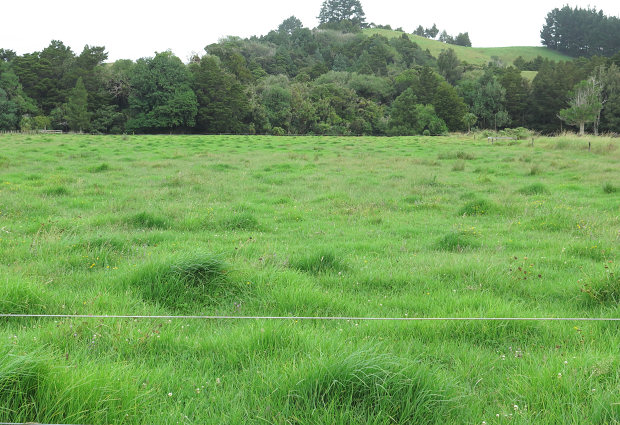 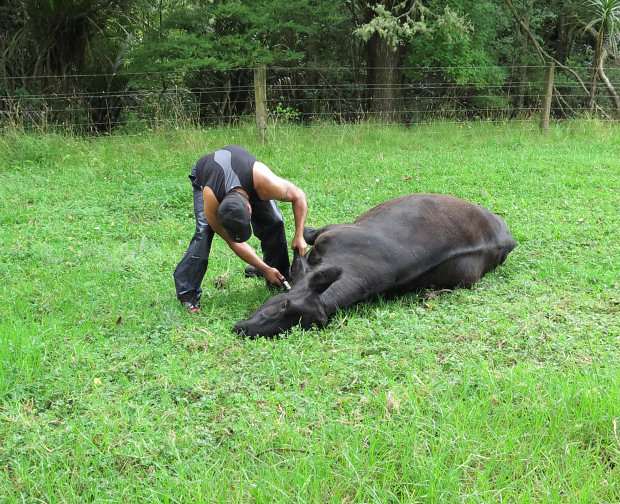 Xavier turned up in his ute and after waiting a couple of minutes for a passing shower, we went back over to the yards and I let 136 out on her own, since she's so quiet.  She quietly ambled toward Xavier and he shot her and down she went.  Then he stepped in to cut her throat to let her blood out.

Watching a shot animal drop is astonishing and you sometimes think they must be still alive because of the way they go down on their legs - Dexie slumped so that for a moment before falling over sideways, it was as if she'd just sat down and muscles don't go limp immediately either, so her head was held up oddly until she toppled.

Generally the shot kills them outright but animal welfare law requires the cutting of the arteries to the brain to prevent any recovery of consciousness in case it has only stunned into unconsciousness, whether the animal is for eating or not. 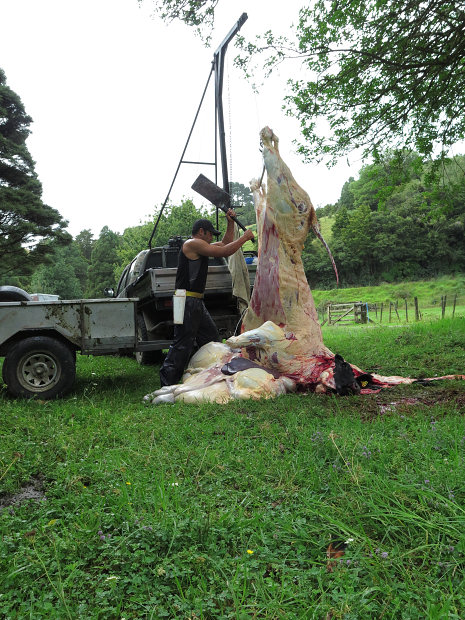 I hung around for long enough to collect her reproductive tract.  The bull having been with her 48 days ago, I was interested to have a look at the pregnancy I presumed was developing.  I have pictures for anyone who is similarly interested.

Homekill slaughter day above: if you'd rather skip those two pictures, click here to return to the top of the page. 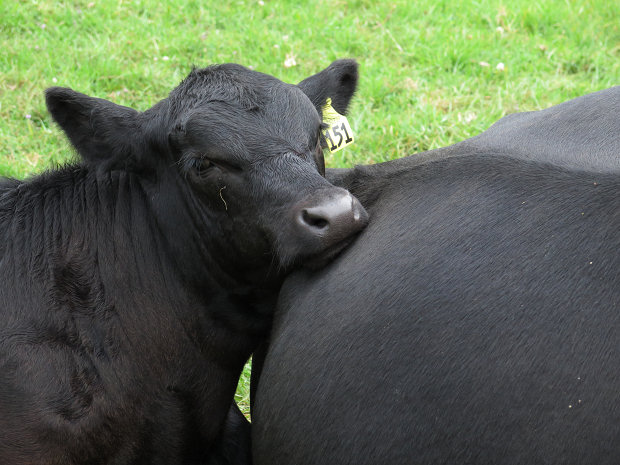 Funny calf.  He stayed in this position as I walked right around his mother.  I'm glad I'm not a dairy farmer because watching animals living through this part of their lives without interruption is so lovely. 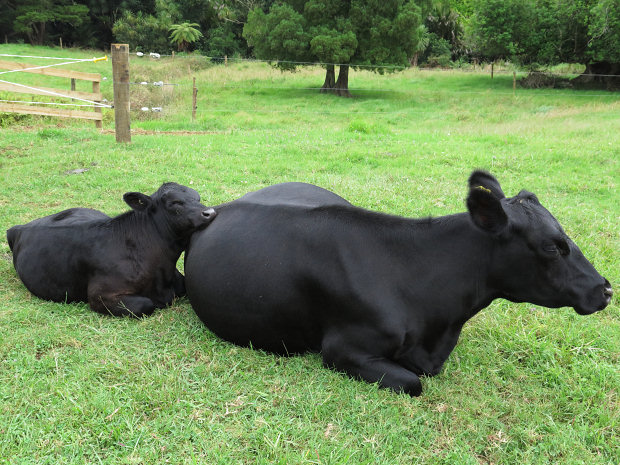 151 was born just down the slope behind them, where that original fence has been removed.  I didn't include a picture of him on that day but did comment later that evening, "When I went out for my late check tonight, he was curled up beside his mother, sheltered by her body from the breeze, with his forehead pressed against her back." 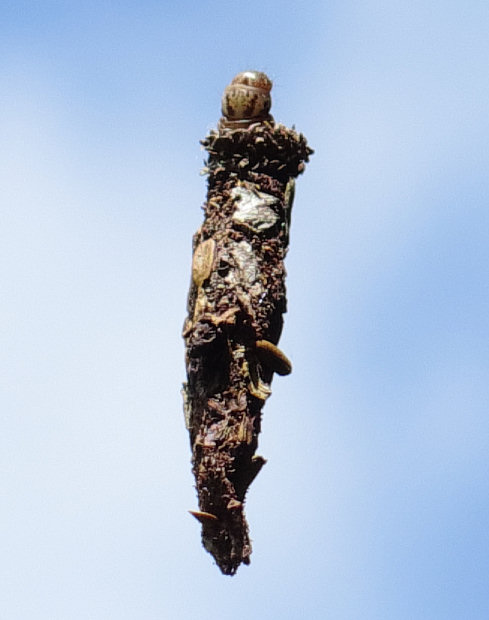 A bag-moth caterpillar, hanging on a very long thread of silk, from a Totara branch above the track.  The breeze was quite gentle so it was only swinging slowly through the air.  I thought it would look quite funny with its head sticking out the top of its sleeping bag, in mid-flight. 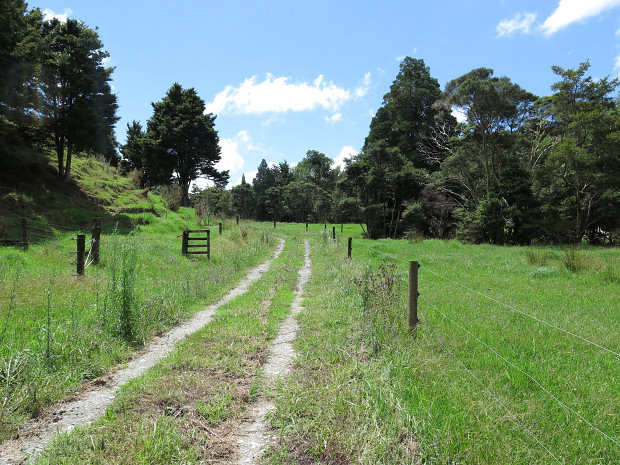 On this very hot summer day, it is lovely to be surrounded by so much vigorously-growing grass.