I awoke in the middle of the night in excruciating eye agony, stumbled down the stairs with my eyes closed since I couldn't open either one, found the anaesthetic drops and eventually managed to hold my eye open enough to get one in, which provided sufficient relief for me to return to bed and sleep a bit more.  I repeated the whole thing again at first light.  After breakfast I realised it was ridiculous to try and look at anything so went back to bed and slept until one o'clock.  An ice-pack in a wet flannel provided ongoing relief as I needed it and the pain began to abate during the afternoon.  It was still pretty nasty but at least I could keep my eyes open when I needed to.  Nick rang up to see how I was.  Personal care is so lovely.

Unfortunately I'd only managed to do half the GST calculations before I went to Auckland, so had no option but to do the rest this evening, since the return was due.

The speed of decrease in my eye pain is as extraordinary as the horror of the pain at its worst.  I had a restful night, partly helped by one of the sleeping pills I was given at the clinic and today my eye feels only as though full of stray lashes, rather than being poked with a Totara leaf - they really hurt!

When I needed to feed the budgies, I patched my eye, to avoid any possibility of anything getting into it.

Today I discovered we'd been sucked in to the Microsoft Windows 10 con, where when one clicks on an X in the corner of a pop-up window asking to upgrade a computer, instead of closing that box and accepting that one does not wish to proceed, Microsoft immediately commences a 3GB package download.  Because we did not realise it was happening, we periodically closed our computers or disconnected the internet and so the whole thing repeated the next time we connected.  It was not until I received a "you have used 60% of your data allowance" email that I realised what was happening.  That 60% was used within the first five days of our monthly allowance, leaving us with 25 days during which we must strictly limit our on-line access.  Even more annoying was that I had heard a radio discussion about the issue a few days before but because of the various distractions of the last few days, had forgotten all about it.

We went in to town to collect various budgie-cage building supplies.  We looked for hinges and latches for the doors and couldn't find anything very suitable, so will look in Kerikeri tomorrow.  I bought some nice rope and a bit of chain for the birds' entertainment.  Stephan went to see plumber Jack Rogers to ask if he'd make the base tray for the cage, since it needs to be tidily folded at the edges.  He said we can pick that up tomorrow.

I met a new optometrist this morning, having decided not to go back to the Specsavers branch in Kerikeri.  When I was last there, I had a conversation with someone who said she was surprised so many Kaitaia people had continued using the company after it closed its branch in Kaitaia, considering there are two other optometrists in the Kerikeri area.  I hadn't really given it a lot of thought and suppose the same applies to everyone else who still goes there.  But I'm fed up with being called "fussy" because I'd like to be able to see clearly and pretty disappointed in their service in general, so today went instead to Waipapa Eyecare.

Chloe the Optometrist was very pleasant, removed the protective contact lens I'd been wearing since Friday and commented that the recovery of my cornea so far was very good for four days since the procedure.  I'll see her again in a month.  All this after-care is paid for by the Eye Institute, which is very helpful.

Then we popped in to Kerikeri, bought budgie cage hinges and thought about practical ways to latch and lock the doors.

Then home via the East Coast so we could meet Lesley and Kim at Taipa, to pick up these three: 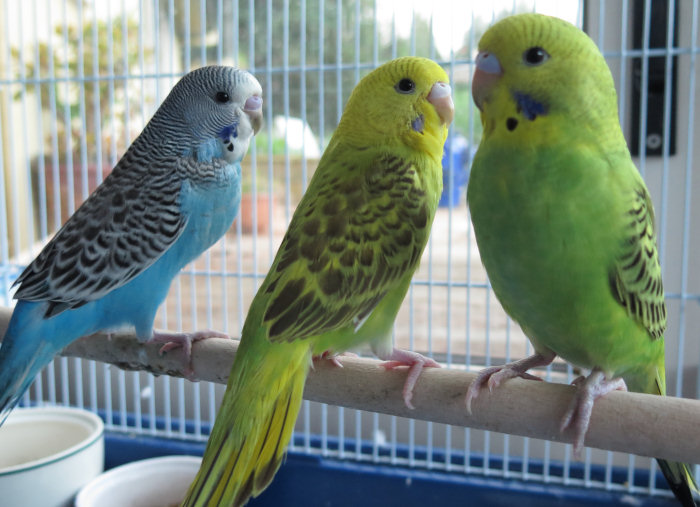 Lesley took two of Loofah's tiny pink babies and two of the bright yellow ones about five weeks ago and has been hand-rearing them so they'll be relatively tame birds for the cage in the Puriri Wing at Switzer - and then fell in love with one of the blue ones, so she's kept her.

While waiting for the budgies at Taipa, we visited a new gallery where the Betta Electrical shop used to be, containing lots of local art, carving, photography and wood turning.  I looked at the name above the door but I cannot remember it now.  We'll have to go back.

Then along to meet a couple of people I've known only via the internet, who breed down-sized sheep and have offered to lend us the services of a ram for the three ewes I still want to breed.  I really don't want to buy and own a ram for that many ewes.  I don't much like rams.  We also need to try and reduce the size of our adult sheep because they're getting hard for Stephan to shear.  That the biggest ewe is now six years old and has never lambed, has not helped to keep her mature size in check; she's fat and huge.

The rams available are beloved pets and one was purchased at an enormous price and their owners, Leonie and Terry, weren't awfully happy about either coming to our place, so have invited our ewes to go there for the necessary period.  Bearing in mind the circumstances of Dotty's recent demise, I'm quite happy about that too.

In town the base tray for the Switzer budgie cage was ready for collection, provided at no cost as Rogers & Rogers' community contribution, for which we thank them. 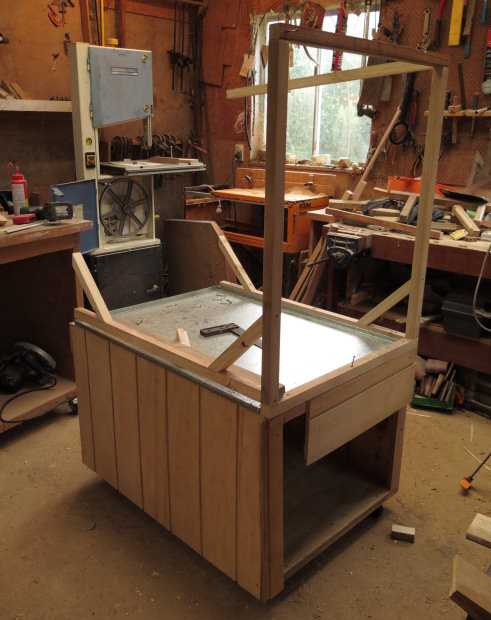 The tray is big but easy to handle, with nicely double-folded edges for strength and smoothness.

We did some research on the minimum living area required for caged budgies (thank you Toni Poad of budgie-info.com) and then rounded up according to the measurements of the wire mesh and the original dimensions we'd intended.  We thought the base should be low enough that someone sitting on a chair could easily see the bottom of the cage and tall enough that people of average height would be looking into the cage when standing, not down on it. 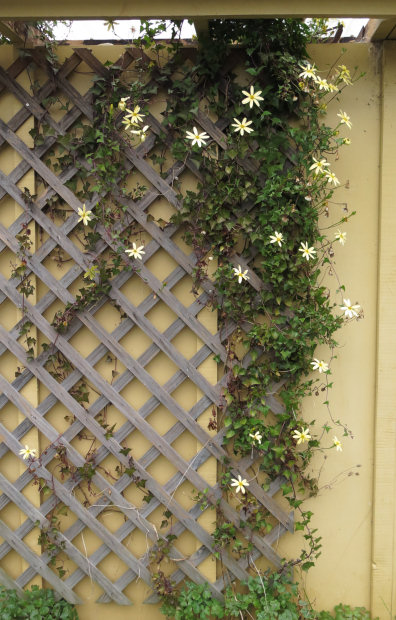 The lovely daisy with ivy-like leaves, Senecio macroglossus, is looking very healthy and happy at present.  It doesn't get a lot of rain in the summer, but I obviously managed not to forget to water it too often. 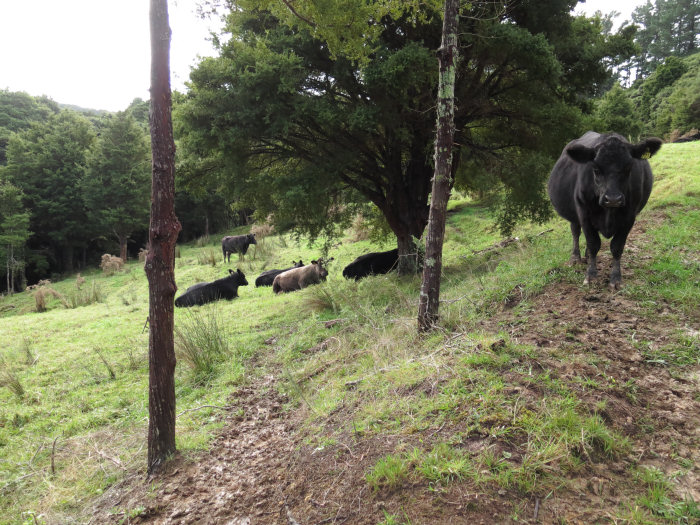 The weather was cold, wet and nasty this morning and I waited until the early afternoon to go out to check on the cows, by which time the air was still and the temperature was gradually rising.  The cows seemed to be relaxing in relief, after what must have been an unpleasant night and morning. 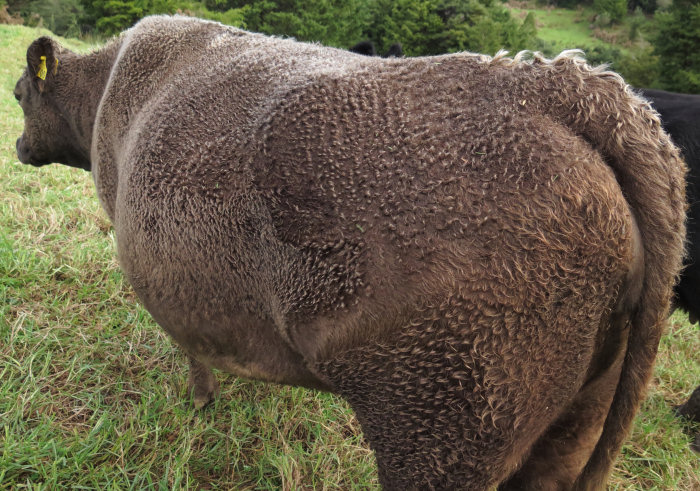 Endberly now looks just like her mother, Curly, and just like grandmother Fuzzy, with her hypotrichosis-affected wiry coat.  Fortunately her hair grows almost normally in regard to its thickness in winter, so she doesn't suffer the cold as some with this condition apparently do, if their hair growth is sparse. 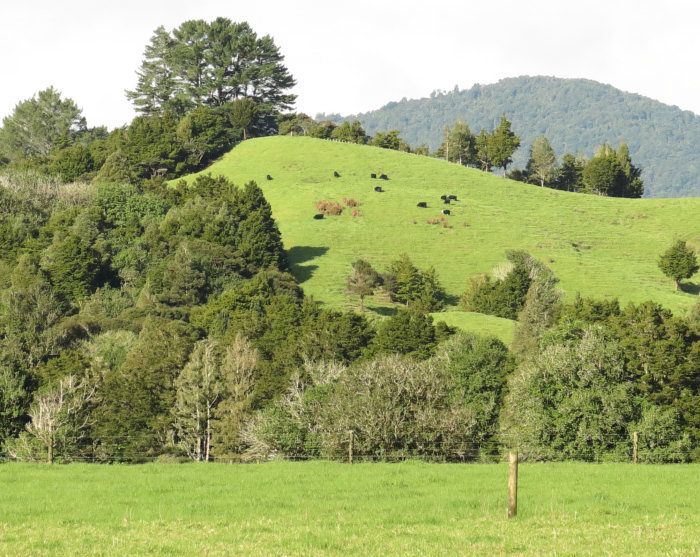 Checking the calves is easy on a sunny afternoon when they range across that slope, all eleven within view at the same time.  I can count the right number now my vertical double-vision is fixed, no longer seeing 22 black shapes. 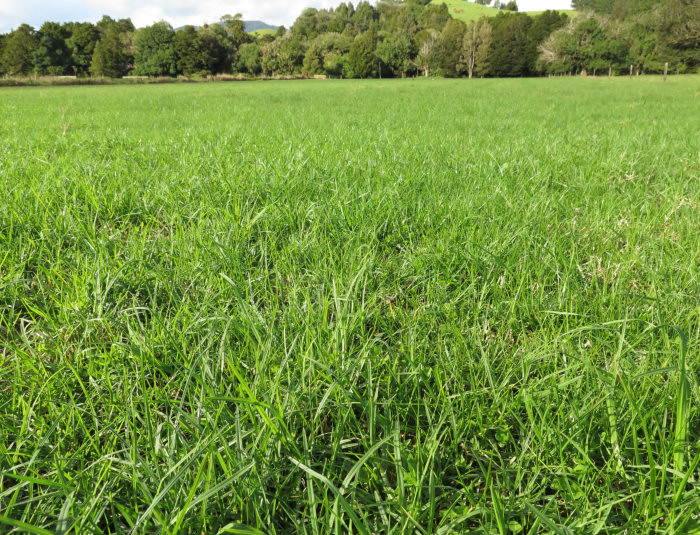 I went around the over-sown paddocks to see how the new grass plants were growing.  Flat 2's grass is looking fabulous, lovely and thick and green, although some of the new plants (below) are still pretty small and pull out quite easily.  This paddock has only had four weeks since sowing. 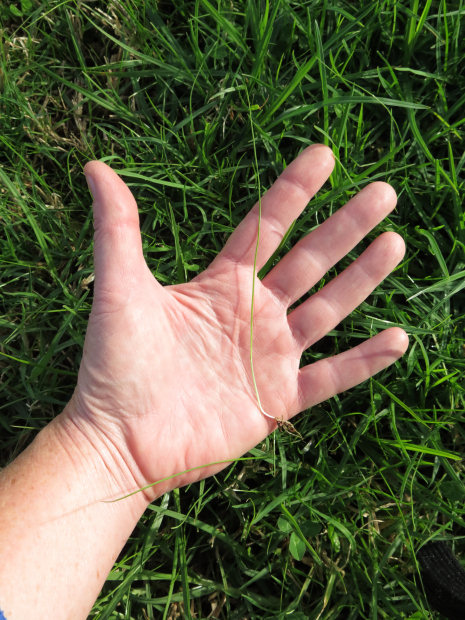 Another couple of weeks and the plants will be safely anchored by their roots and about ready for the first grazing by the small animals.  If the paddock had been bare and the new plants were the only species, they'd have to be left to establish a bit more, I think, but plants growing in amongst the Kikuyu sward have lots to hang onto at their base. 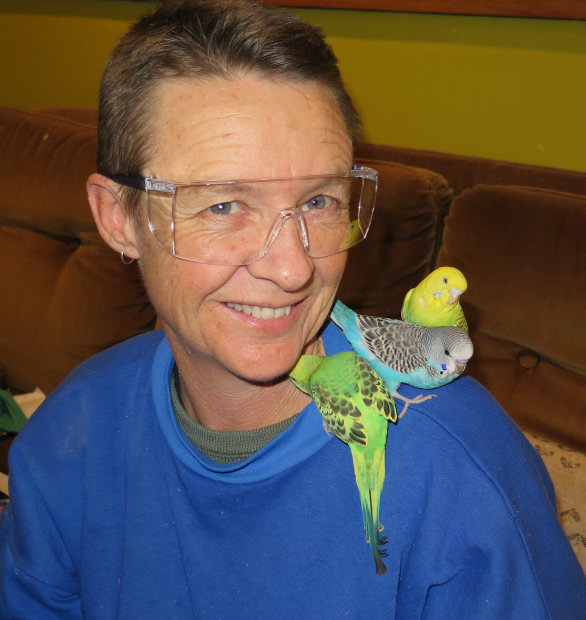 Budgies are dangerous birds.  Not really; I wore the safety glasses because they sometimes flap their wings a little too close to my face and anything in my eyes at the moment could be more damaging than usual.  The little budgies require frequent handling if they're to remain tame.  Lesley clipped their wings before sending them to me and I think they're still getting used to their imposed disability.  I'm not sure they needed to be quite so short but the intention was to keep them safe if they somehow get released from the cage when in their new home.  They move around like mice and are just as soft. 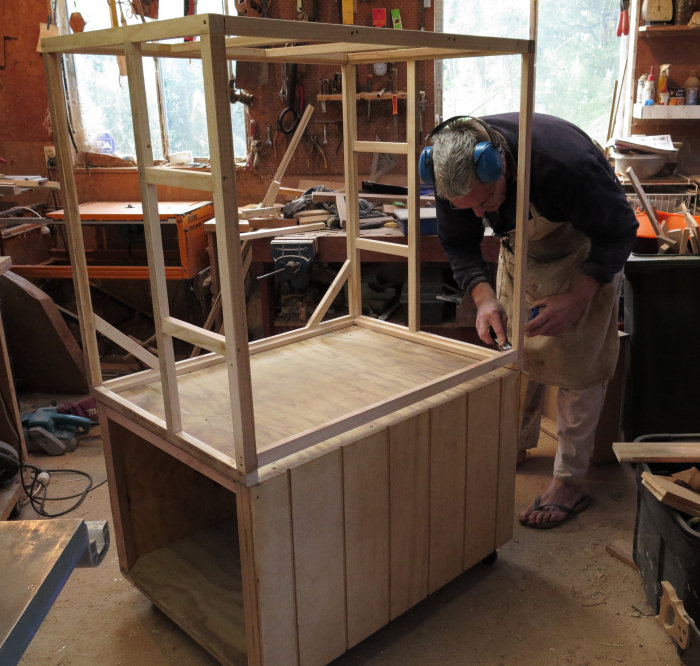 The cage is taking a bit of time to get right, since we're not building to a particular plan, just making things up as we go along.  The doors, for instance, were going to be at the bottom corners but I did some arm-waving testing to see how far I could reach into the cage and determined that they needed to be half-way up the end walls to enable the whole internal area to be accessed from the outside, from either end.

Jackie popped out for a look, on her way south to a meeting and appeared very impressed.  I told her she was here for a consultation but that if the cage was too big, that was how big it was. 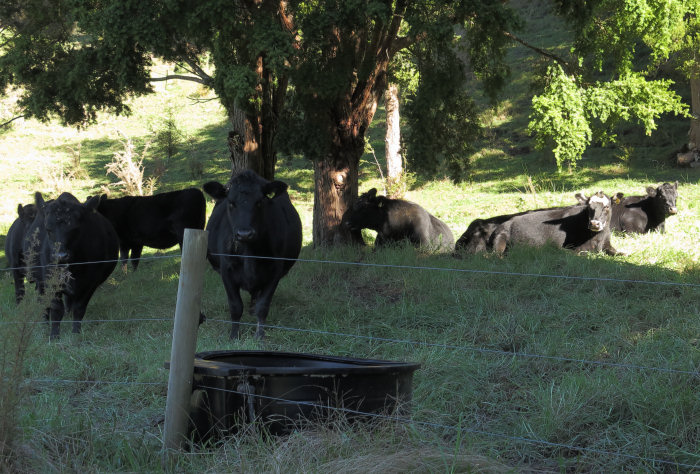 Today was my first day free of significant eye pain so I decided to go out and do some farming, checking the animals.  The ten pregnant heifers were contentedly sitting down the bottom of the PW.

I had a lovely walk around the hill Over the Road, finding all the calves quietly sitting around. 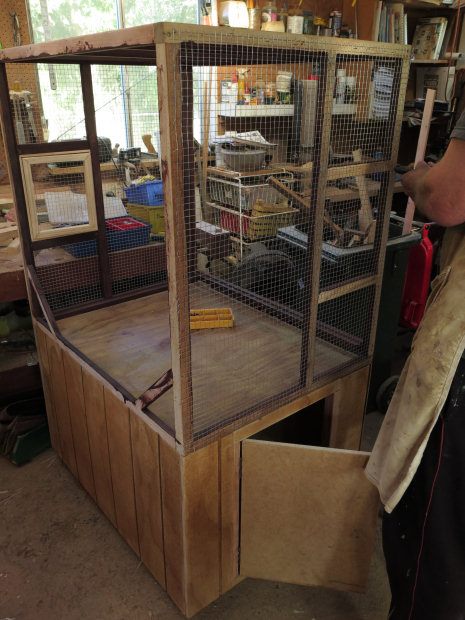 We had hoped to deliver the budgie cage to the Switzer home by this afternoon but Stephan kept running into design or construction issues.  We kept in touch with Jackie and know she needs it in place at the very latest by next Tuesday morning, in time for an external audit.