This morning I spent some time watching a tiny airplane symbol moving across a map of the world, representing the flight on which sister Jude, Roger, Stella, Jasper and Louie were travelling from India to visit sister Rachel in Abu Dhabi.  I don't know how closely the system sticks to real-time but it looks pretty close when you know the times a flight was supposed to leave and arrive somewhere else.

When I flew to England as an eleven-year-old, Father wrote several passages in my travel diary, telling me where I'd be at various times; things are so different now!

Feeling slightly more capable of life and movement today, I went out to move some cattle around.  These are the weaners which will henceforth be known as the rising yearlings (R1), or the yearlings as they get closer to spring time and their first birthdays.  I called them and they all came, which was a relief, saving me having to go hunting for any of them.  It's nice when young cattle learn to move together and come to a call. 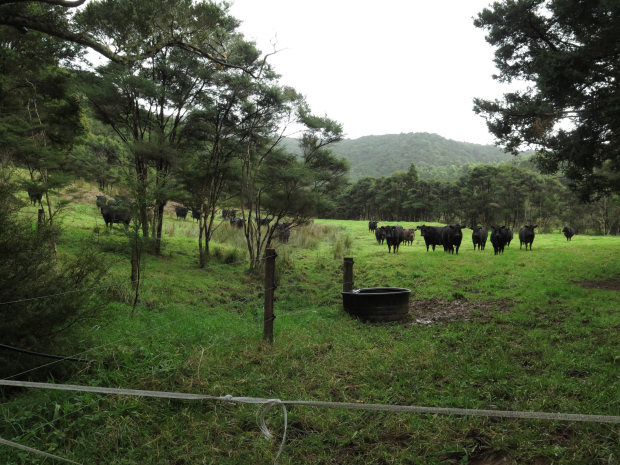 The cows were keen to move from the Blackberry paddock, a smallish area for 35. 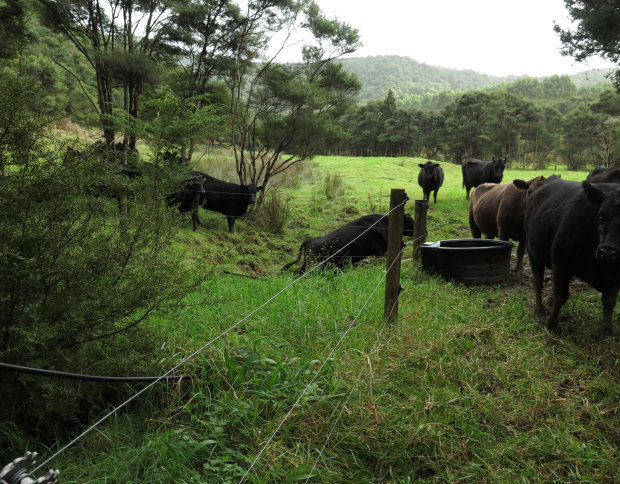 That drain is somewhere in which I will be very glad to see the installation of a culvert pipe!  We meant to get it done during the summer but the summer seems to have passed before we were quite finished doing everything.

The cows don't like stepping into boggy places, seeming unsure they'll find firm footing at the bottom; the last thing a cow wants to do is get bogged and stuck. 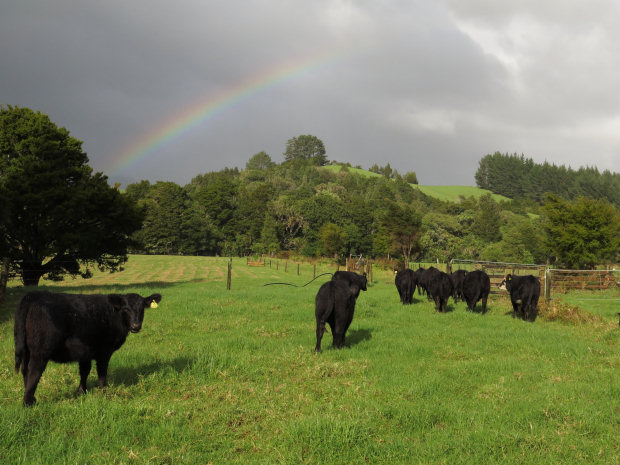 Back to the calves, who'd had a bit of a graze in the little Camp paddock while I was moving the cows and then having some lunch.  We took them out to the front and across the road to the big hill paddock.  They've been over there with their mothers but this was their first time alone; they seemed a bit tentative but moved well enough.

There was a thunderstorm in the middle of last night so I had dashed down and turned off the Freeview television receiver, it being the most sensitive piece of equipment plugged in to the mains.  This evening I remembered to turn it back on again and nothing happened.  I tried a number of times then gave up, unplugged and wound up all the cords and rolled the whole lot into the spare room.  We lived without television for a long time several years ago and unless someone recycles their old equipment in our direction again, we'll now live without it again.  There's been less and less to watch in any case.  While we enjoyed some of the drama series, missing them is no worse than not having read libraries of books we've not had time to open in recent years. 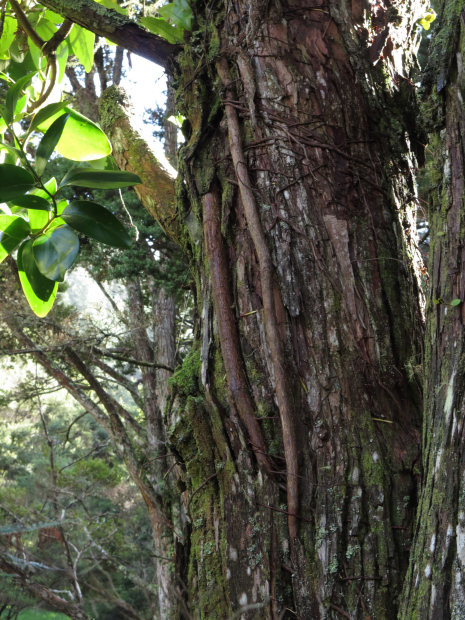 I was in the Spring paddock to check the pregnant heifers had found the open gate to the Middle Back, which they hadn't, so I moved them through.

This is the Puka growing in the smallish Totara I photographed three weeks ago and these are its vines or trunks or whatever they might be called.  Mature, old Puka have thick, deeply grooved trunks which sometimes swing out away from the trunks of the trees in which they grow.

A couple of weeks ago I asked nephew Nick (optometrist at the Eye Institute in Auckland) about the possibility of tweaking the focus of my left eye, the one in which the replacement lens provides me with startlingly clear close vision but which unbalances me in a way I'm finding increasingly unpleasant.  I need to be able to see clearly and evenly into the distance for almost everything I do and with a short-sighted left eye, I find my lack of perception of distance is making riding the bike and walking on uneven, slippery ground, quite hazardous.

Ninety-five percent of people who have this "blended vision" arrangement find it marvellous, apparently; obviously I am not one of them.

Today I ran over a fallen branch on the bike because whatever I was seeing was not that.  I came home and rang Nick and asked how soon I could book myself in?  By the end of the day I had two appointments, one on Thursday afternoon and the operation on Friday morning and had booked a couple of flights down and back (by the time you pay for petrol and think of the time it all takes, flying is cheaper even at $200 each way).  To my great relief, the eye operation will not cost me any more.

I spent a lot of time thinking how glad I am that I don't have very much time to think about having my eye done!  That sort of thing makes me very nervous.

We popped in to town for me to consult our GP about my recent migraine changes and on our way visited the Switzer Residential Care home.  Our friend Jackie, who manages Switzer, had asked if Stephan would build them an aviary, as part of something called the Eden Initiative, the inclusion of animals in the lives of the aged residents.  When we went to measure up she said she'd downsized that plan and could we build a nice cage for indoors?  So we started thinking and planning and Lesley came and collected four tiny budgie chicks to hand-rear for the project.  Then Jackie changed her plans again, saying she'd purchased an appropriate cage.  Today I went to have a look at that cage, since the birds will be ready next week and I wanted to see how they'd be living.  The cage was entirely unsuitable, being one intended for birds of at least Cockatiel size and out of which budgerigars would easily escape.  So all of a sudden we're back to plan B with only a week to build the cage!

Off to the airport at 5.30 this morning and down to Auckland on the 6.20 flight.  My appointment wasn't until 2pm so I had loads of time to catch a bus in to town, another out to Newmarket where I thought I'd spend some time looking around the shops.  Shopping is incredibly boring.  I went in to a bookshop and found a copy of the lovely new edition of The Trees of New Zealand and read a few pages of that for a while, remembering to look up something I've wondered for a while: do Titoki trees have both flower sexes on one plant?  Apparently they don't, which may explain why I've never found any of their distinctive and very striking seeds on the trees I visit.  There must be some female trees around but they may be the old, very tall trees whose canopies it is difficult to see amongst the rest of the forest when craning my neck.

At the Eye Institute in the afternoon, someone put me in front of several machines to carefully measure my eyes, Nick then instilled the drops which make one look like a mad owl, to widely dilate the pupils and I went on to see his clever boss, Trevor Gray.  Trevor put me in front of another machine while he held the back of my head still and repeatedly popped a laser into each eye to cut the lens capsules so they would clear away from the rear of my new lenses.  This was something they'd told me might be necessary at some time but since I was there, did it anyway.  The lens capsules remain in place when the cataract-affected natural lens is removed and in relatively young people, new cells will proliferate across the back of the capsule, increasingly clouding the vision again.  It didn't hurt at all, was just a little alarming in thinking about what was going on!  And I felt odd with my eyes full of weird drops again.  The vision of my right eye in particular should now be slightly clearer than it was.

Afterwards I took a fast walk 1.5km up the road to a particular chemist to collect some special eye-drops and then back down to Newmarket to catch a bus to join my host for the night.

The best change in Auckland since I lived there is the public transport system.  At last there are buses which go across town, around in wide loops from one part to the others, rather than necessitating going in to the centre and then back out again.

I got off at Balmoral, walked a short distance to Alison's place (she's one of the wonderful Women's Studies people I met last year) and after dropping my gear and putting the eye-drops in the fridge, we headed out to dinner, a Women's Studies meeting and then to a café for a couple of hours of live music.

At home Stephan went out for his Birthday dinner to William's place, Elizabeth also being away.

Alison took me out for breakfast and as we were sitting waiting for our orders to arrive, I realised it was the place I went to on Election night eighteen months ago with Michael Bennett.  Afterwards Alison went off to work and I caught a train, for the first time ever in Auckland, from Kingsland through to Newmarket.  I love trains!

Then back up Remuera Road, some double-check eye measurements in case yesterday's minor procedure had changed anything, a bit of a wait and eventually in to the laser room.  It had been explained to me that the process was to scrub the epithelial cells off the surface of my cornea (an incredibly unsettling experience, seeing the spinning mini brush thing coming into my eye!) before the harder corneal cells were lasered according to all the calculations made with my measurements, to make my focal length distantly clear rather than arm's length.  The other unsettling thing was the smell, not unlike burning hair.  But it was all over in a few minutes and with anaesthetic drops, barely more than uncomfortable.

I hung around for a couple of hours, because I didn't have anywhere else to go, feeling pretty sick.  Nick was lovely, bringing me something to eat, something to stop me losing it again afterwards and he found me a quiet room to hide in and shut my eyes for a while.  Then I caught a Discount Taxi to the airport with a delightful man with whom I had some great conversation and kept my eyes open far too much.  At the airport I asked to be let in to the First Aid room (I found out how to do this yesterday morning) and lay in the dark for a couple of hours listening to my radio, drifting in and out of sleep in the midst of the flight announcements and repeated hand-drier noise from the adjacent toilets.  Every now and then there was almost silence and I imagined everyone must have been evacuated and I was alone in the building.  It was weird being in the dark in the middle of such a busy, populated place but exactly the right thing to do for my eye.

Of course there were pain-killers and some anaesthetic eye drops but the use of the drops came with a caution against over-use because they would hinder the eye's recovery and should not be used after 24 hours.  Nick said I could use them a little later if I needed to but my aim is the best result I could get and so I probably didn't use them as much as I could have - and then on the flight home I needed to but had no mirror to ensure I would get them safely in the right place.

It was very good to be home and I had a painfully miserable night.