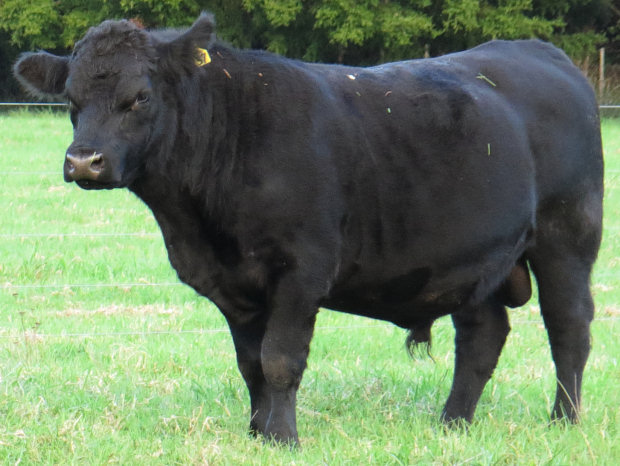 Here is 137, now eighteen months old and responsible for about sixteen pregnancies amongst the cows.  I would keep him except that his temperament is unsettling.  He gets very excited about things and I take warnings of possible danger in large animals seriously.  Hopefully he'll produce some nice calves without similar tendencies. 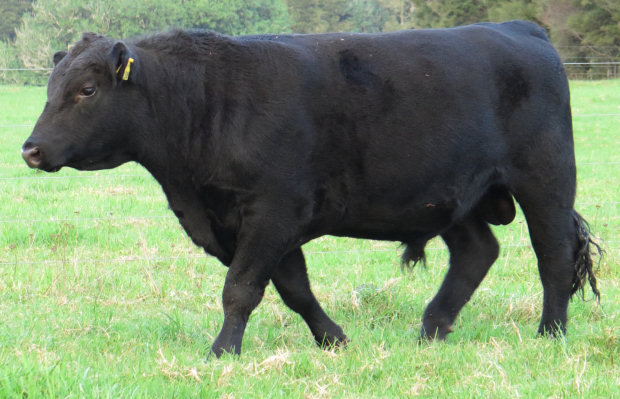 138 is not quite as muscly but I think he'll turn out to be a nice bull.  He had less cows during mating, but will potentially have another turn next year. 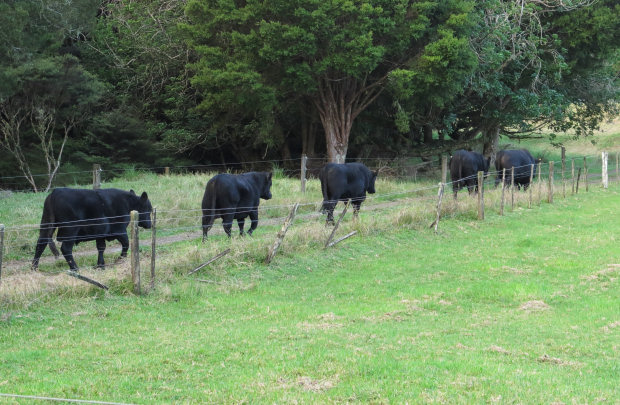 I sent the five of them on their way down to Flat 1, since the stock agent said those I'd booked in to the works would go early this coming week. 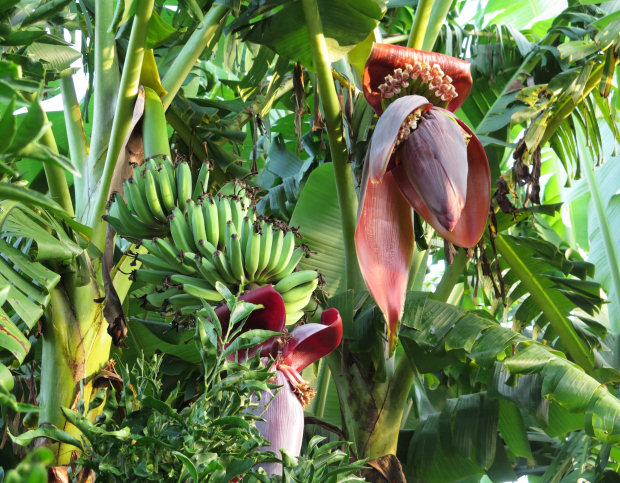 Down by the cowshed this morning, where I was taking some video of Stephan milking Zella, the sun was shining on the bananas with their lovely array of colours. 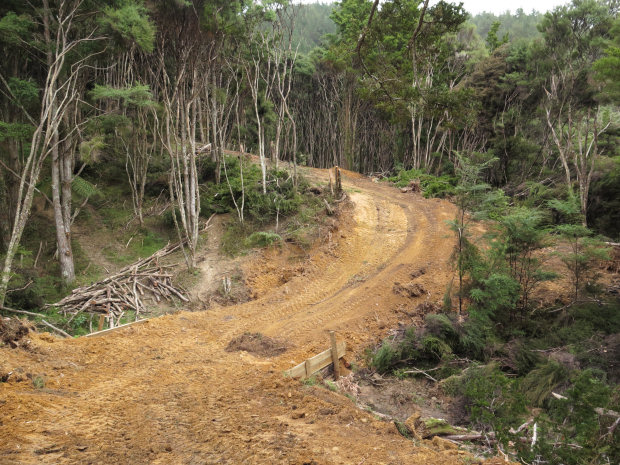 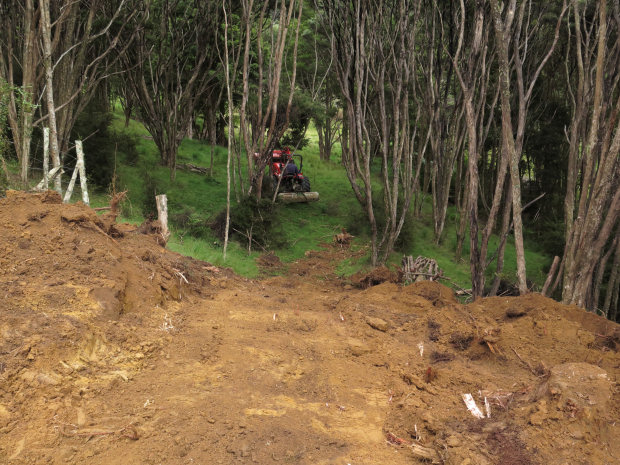 ... and has now reached the Middle Back.

Stephan says he's never been down in that bit with a tractor before.

Down to the right is the beginning of the boggy wetland which continues down alongside the track before the water joins the Taheke Stream, just upstream from the second track crossing.  Many years ago (in April 1997, my records tell me), before we discovered that both liver fluke and copper deficiency were affecting the cattle here, lovely 32, a quiet Friesian cow, got stuck in that bit of swamp.  Cows with heavy liver fluke infestation become anaemic and weak, often falling into drains and wet areas where, if they're not found in good time, they'll die.  Some visitors were here with us and together we extracted her from the mire and slowly walked her all the way up the steep slope to the top gate, then down the Big Back North track.  It was quite a feat for a weak, cold cow.  At the time that was the safest, easiest way to get to a safe area where she could recover.

A migraine made me slow down today.  Oddly the pre-pain aura was in the right side of my visual field, rather than the usual left.  Fortunately good drugs often make it possible to carry on doing the things I need to.  On this occasion I sat quietly going through old notebooks, updating my cattle treatment records, to try and track down how much copper supplementation the youngest bulls had had during their lives to date. 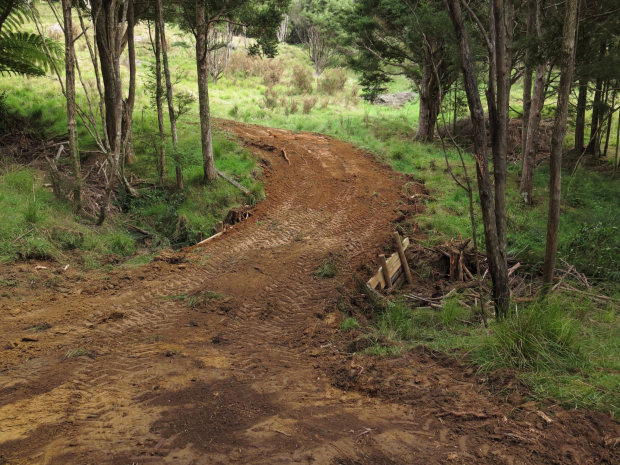 I don't recall ever having taken a "before" photo of this new crossing in the Middle Back.  A deep gully comes down the hill, formed by the water which comes up just below the big (mostly dead) Puriri trees.  At the top it just creates a bit of boggy ground but as the hillside steepens, the earth has been cut away to a depth of about four or five feet in some places (1 - 2 metres, perhaps).  In one place near the top, it goes underground leaving a natural culvert crossing, which the cattle regularly use, then the deep gully resumes and continues down the hill.  Here where the land is less steep again, the water hasn't cut so deeply but this crossing was difficult because of the presence of a couple of ancient bits of Puriri trunk which were gradually being exposed by water and rainfall and between which the gully water ran.  The cattle had to either cleverly jump across from one side to a tricky small landing area or to step down about half a metre into the wet mud and then struggle up out the other side.  The cows would do it but the calves were never enthusiastic.

This beautiful new track, over a new culvert pipe, creates a solid pathway for the cattle from one side to the other.  If this had been in place a couple of weeks ago, getting the calves out of here would have been a breeze!

In the afternoon, in a fit of madness, I went out to sow Flat 4.  I wasn't feeling too terrible when I started but by the time I finished I was wobbly and nauseous.  With a migraine, I probably ought to have been sleeping on the couch!  But the seed needed to go on before I moved the cows, because they needed to come out of their current paddock and soon it will probably get too cold for the seed to germinate and establish strongly before winter.  I've never been able to sow this late in the season.

After a quick sit-down rest back at the house, I fetched the nine heifers from the Pines, drafted the pregnant five into 5a and the other four into Flat 4, then brought the cows from the Small Hill, drafting the pregnant R3 heifers into 5a with the R2 heifers and the rest went in to Flat 4.  The young pregnant cattle can now be looked after as a priority mob and I don't have to be quite so careful about the other lot.  Mature cows are generally forgiving of the occasional feed pinch and the non-pregnant youngsters with them will do quite well enough on the same feed.  They number 35, so I may split them again later, perhaps into an old fat mob and a young thin one.

The two little weaner bulls were in Flat 3 next to the cows and 151 spent all evening calling in the most piercing manner toward them.  I thought at first it was in response to the proximity of his mother but concluded later that his communication was directed to someone in the cow mob coming on heat!

Not feeling so good this morning, I got up with Stephan at six, ate not quite all of my breakfast and went out and got the bulls in to the yards as soon as it was light.  I painted the backs of the three who were to go off on the truck and even remembered I needed to take tail hairs from each of them (in case they ever require genetic testing, since they're all herd sires). 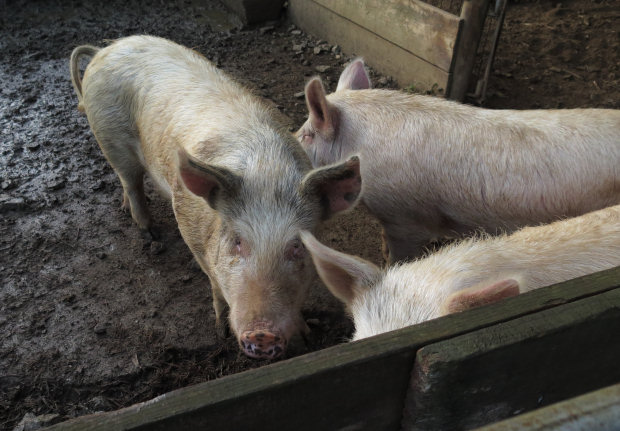 Then up to the pigs.  This is the last morning for the biggest pig. 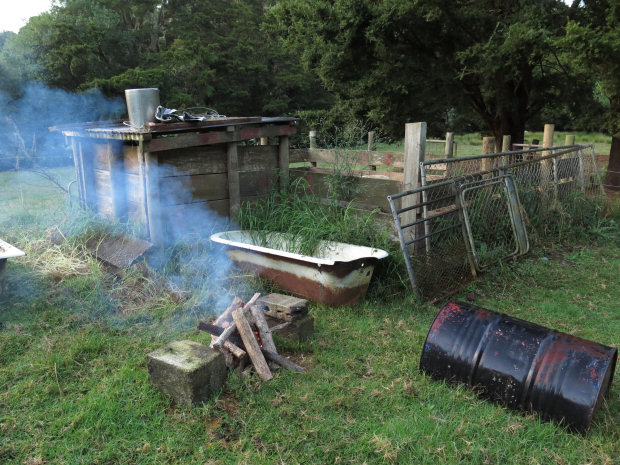 While Stephan milked Zella, I lit a fire beside the sty, ready to heat the water Stephan and William would use to scald the pig in preparation for removing its hair.  It's nice lighting a fire outside; primal.  I don't often do that, since in summer it's far too dry to be safe and in winter, I light them in the fireplace, inside, where they make the whole house warm. 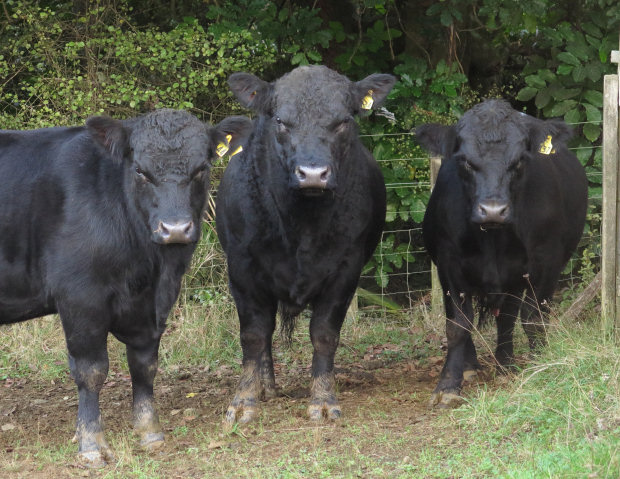 I've taken a few photos of the bulls in the last week or so, body shots for later reference, but hadn't taken any recent ones of their faces.  When their calves are born, it's nice to be able to recall the bulls' faces as well as comparing the calves' appearance with their mothers. 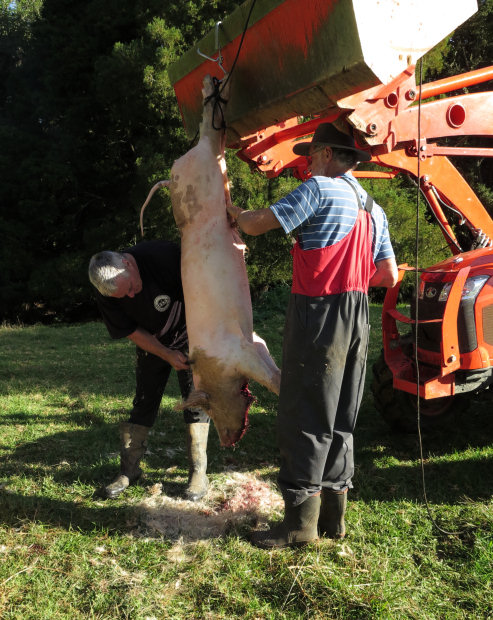 I didn't notice at the time, but here's a photo we could include in our Safe Work Procedure, demonstrating what not to do when pig processing: don't stand under the hydrolic front-end loader!  It is (as you may know) a new, well-maintained tractor and the front-end loader is unlikely to give way and fall on anyone but one really should avoid standing under the raised bucket, just in case.

That issue aside, Stephan and William had killed and scalded the pig (submerged it in hot water for several minutes to relax the hair follicles) before hanging him up so they could scrape the hair from the skin. 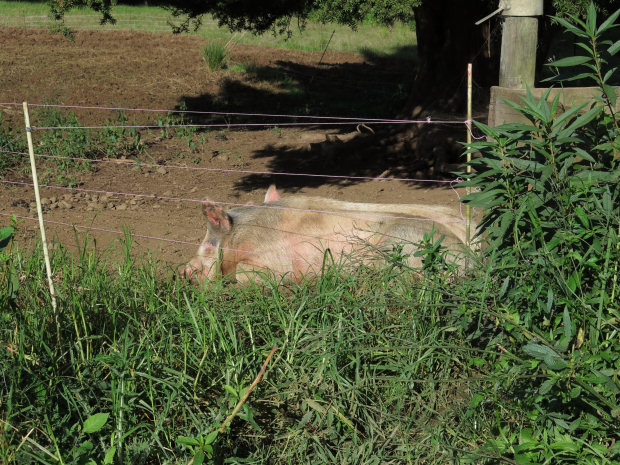 The other two pigs did not appear at all perturbed by the removal of their large companion.  Both were quietly asleep in the sunshine.

After providing coffee for the pig slaughterers, I retired to the couch with a blanket, feeling worse by the minute, my migraine making its presence very much felt.

The truck arrived on time, Stephan dashed over and helped load the three bulls, all very calmly, and returned to carry on cleaning the pig.

When they were finished, the pig went into the back of William's car and Stephan into the front and off they all went to town, since our ute, which we'd left there about three weeks ago to be fixed, was finally ready for Stephan to collect and bring home.

Later, during a short period during which I was able to stand up without being violently ill, I quietly walked the two bulls from the Pig paddock out to join the two weaner bulls.  These four will now spend the winter and spring together until it's time for them to perform their usual duties in the summer.

I moved the cows away from them and little 151 continued calling in a really unpleasant manner.  Eventually he settled down.  There could have been an on-heat animal on the neighbouring property, to which some cattle recently returned.

Some days aren't.  I had spent the night fitfully sleeping, with extreme head pain, trying not to move too much for fear of stirring up the nausea which remained and threatened to well up with unpleasant consequences at any moment.  Having made it through to 7am without having to make an urgent dash to the bathroom, that peace didn't last long after I crawled out of bed.  Oh, misery.

I asked Stephan to shoot me several times during the day; he refused, cruel man.

But these bouts do eventually pass.  By the early evening I was able to take a light dinner and began to feel less like dying was the better option.