The week beginning the 20th of September 2014.
Saturday the 20th 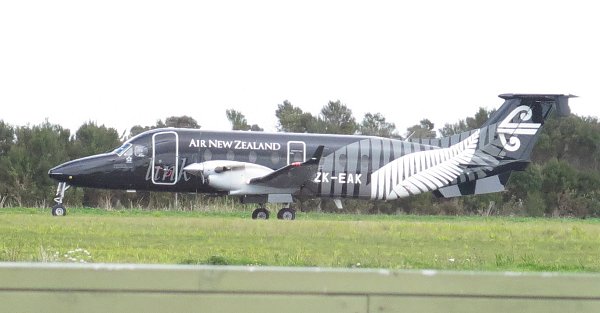 Black planes look odd; but I see this, or others like it, flying over our place from time to time, so know they're part of the fleet.  It was just the same inside: small.

I left Stephan with lists of animals and instructions about which mobs to move where and when and flew away for two days.  I booked this ticket weeks ago to go and check on Jill once more before calving started.  It's a little closer to calving than I ought to have arranged, but only because I like to keep a close eye on the cows in these last weeks of pregnancy. 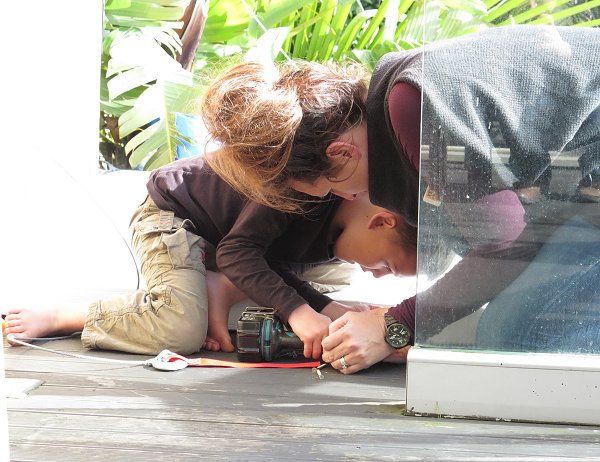 Roger was away for two weeks and I happened to be visiting in the middle of that time, which was really nice for Jude, alone with three children in her care.

I caught a ride with one of Jude's friends to the Election Night party of the Labour candidate for Auckland Central, Jacinda Ardern.  Since I was in Auckland, I took the opportunity to get in the midst of the after-Election excitement.  Not that there was much, the way it all turned out.

Infuriatingly half the people at the event were glued to their own mobile devices and not interacting with each other much at all.  Why they didn't just stay at home, I don't know.

We had lunch with Jill at Selwyn Village today and I met a delightful woman whose name I knew from childhood memory whose late husband was one of the Anglican Church's assistant Bishops.  It's lovely meeting sparkling people, especially in that context since it's otherwise all repetition, confusion and despair.

Louie gave me a present before he went to school this morning. He had remembered that I'd said I was sad not to have any copies of their school portraits and so he'd wrapped one of him for me to bring home.  What a lovely thoughtful nephew.

As I regularly do (around every eighteen months or so) in Auckland, I went to see my dentist so she can tell me how sparkling my teeth are.  It's as much my check on doing things well enough or not in between visits as anything else as I've fortunately needed little in the way of repair in recent years.  I'm the only person I know who goes to the dentist as a regular matter of course.  I suspect I have my Father to thank for the demonstrated habit of doing so.

Jude took me over to Selwyn Village again and we went to see where Jill goes on Mondays and Fridays, to an Alzheimer's activity group: dementia day-care.  I found it rather distressing.  Jill was there at a table with another woman folding paper table napkins in half.  I know what's happening to her, but as my primary sense of Jill is in her professional roles (restaurateur, biologist, teacher, priest), watching her do this horribly pointless task while introducing me multiple times to the other woman at the table, was upsetting.  At least she seems unaware of the extent of her deterioration.

Jude dropped me in Symonds Street at 3pm and I quickly caught a bus out to the airport for my flight home.  The wind was very strong and it was a frightening landing at Kaitaia!  The plane comes down very fast in strong winds, I presume so they have enough forward speed to resist sudden cross-winds.  It's always good to get home.  I was tired and downcast.

Out this morning to check on the cattle, since I didn't do it yesterday evening when I got home in the short period before it got dark.

Most of the heifers were on the near side of the stream in the Frog paddock, but 710 was over the other side and as I looked at her, I realised she was stamping her back feet.  Not good.  I went across to see her and there was mucous spilling from her rear, with a brick-red tinge I did not like.  I coaxed her back toward the others and several of them had a go at her! 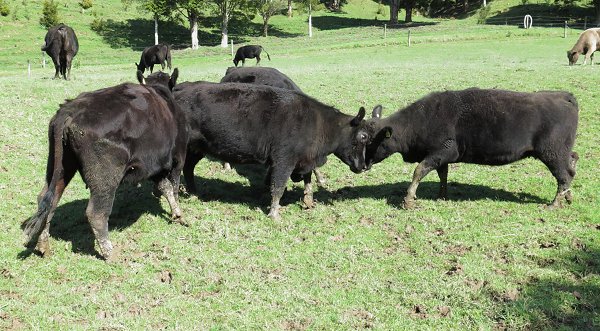 I don't know what this is about.  Is it because the heifer in labour smells weird?  The others shoved her around, attempted to ride her and made it rather difficult for me to get them out of the paddock.  I gave up trying to keep her safe and led the rest out, separating the worst of them in the lane.  On the way along the track toward the yards, I picked up a bit of the mucous and smelt it to confirm what I suspected, but the scent of decay was only very faint, hardly there enough for the human nose to detect at all.

I drafted most of the mob up toward Flat 4, where I'd already arranged for them all to go, then took 710 and a few others along to the yards, calling Stephan on the phone on the way in.

We put her up the race, I got a couple of long gloves, lube, washing water, calving chains and I washed her rear down as well as I could and had a feel.  The calf was presenting head-first with both front legs tucked away down along its stomach, out of reach.  In my experience the only time a calf has ever presented with no legs forward, it's been already dead.  As the heifer hardly smelt at all, I'd still been hoping there was a chance of some good ending - although at eighteen days before her due date (259 days gestation), it didn't seem very likely.

I worked for about half an hour before I finally got her right leg up and gently brought the hoof forward.  But I could not reach the other one.  I figured that 710 might require some antibiotic cover after all this anyway, so called the vet, who came after about an hour and fished up the other leg and he and Stephan pulled the calf out. 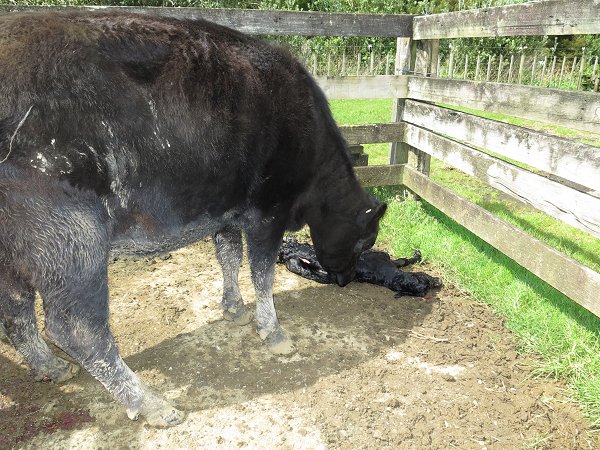 710 got long-acting prophylactic antibiotic and anti-inflammatory injections and I let her back along the race so she could be with her dead daughter where Stephan had dragged her.  (The light strips on her spine are where the hair sloughed off as he pulled her along the ground, an indication of decay.)

I opened the gates so the other heifers could head back out to join the others, but left 710 to make her own way when she wanted to. 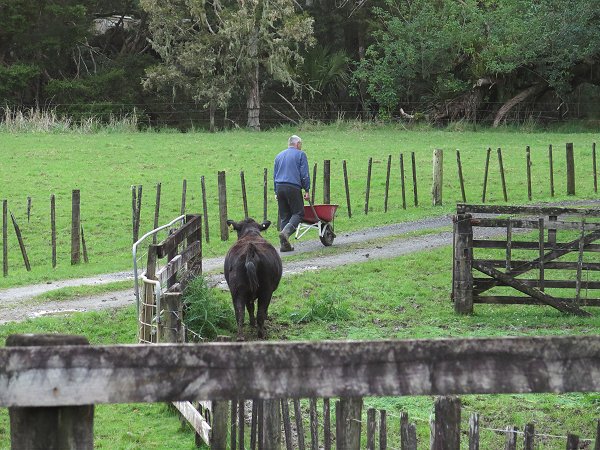 She stood there with the calf for the rest of the day.  I didn't want to leave her out there near the road on her own overnight, so we went across with the wheelbarrow to carry the calf back toward the house and left it lying where 710 could come and go as she pleased. 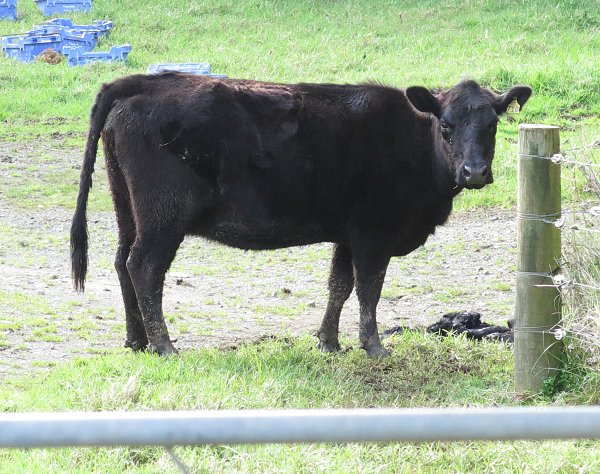 Poor, sad 710.  We could hear her calling during the night as she frequently returned to her calf, obviously hoping to prompt it to follow her.  Eventually she went out to the lane near the others and I shut her in a neighbouring paddock so I could keep an eye on her and keep her separate from her former herdmates: I was concerned there may have been an infectious reason for her calf's death.

While I continued to be suspicious of that, I found evidence of the heifers having gathered in one spot where 710 may have been subjected to some bullying.  The calf is quite exposed on the right side of the cow, where if you watch for movement a sliding-past lump of calf can be easily seen at times.  Cows bash each other with their heads in just that region.  I imagine it's not impossible that a knock at just the right angle might cause enough damage to rupture something or seriously damage the calf. 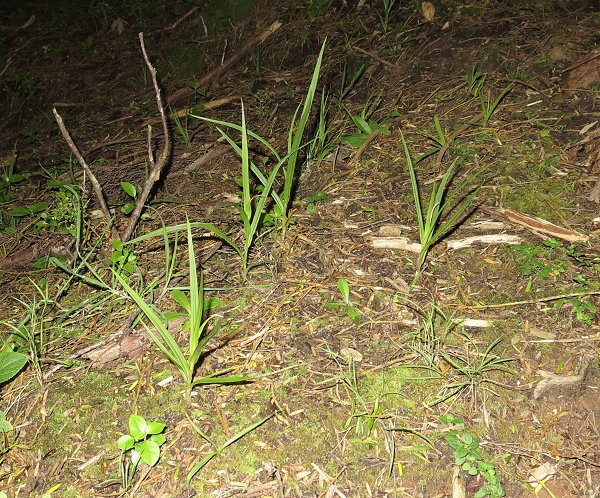 I walked around the Back Barn looking for the 16 cows.  Low down on the slopes near the Middle Back gate the Greenhood orchid plants are already up and have buds about to bloom.  This population is expanding each year. 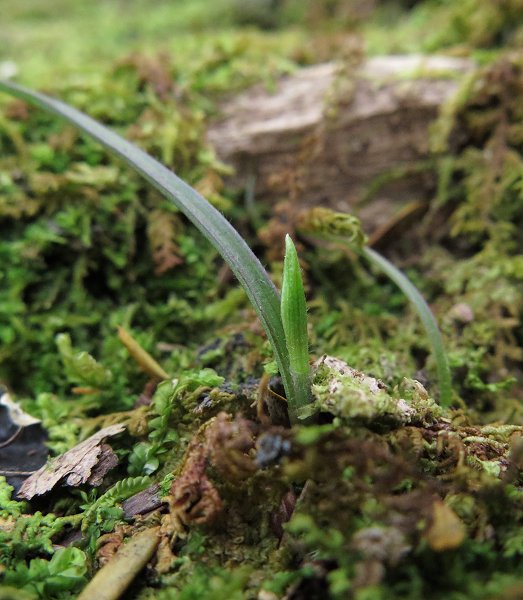 This is one of these (Caladenia chlorostyla) growing on a fallen Puriri trunk.  It's one of the better locations for photography, being at shoulder height, not on the ground. 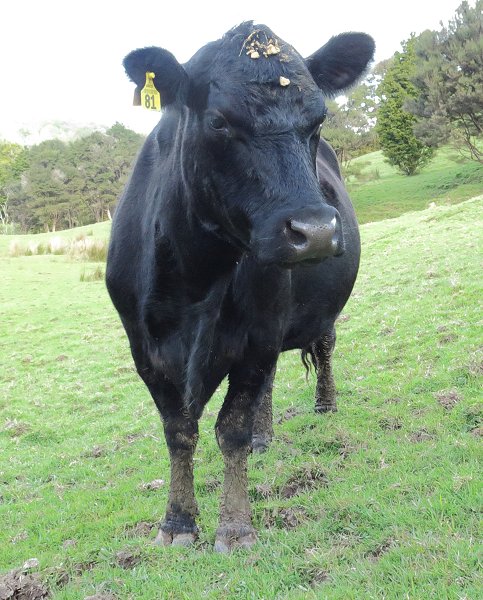 Here's Eva, all ready for the start of the annual Eva's Calving Date Competition.

The competition is an annual bit of entertainment for anyone to join.  Take a stab at it, or get serious and figure out your best guess.  I personally usually get it wrong, so intimate knowledge of Eva is obviously no advantage. 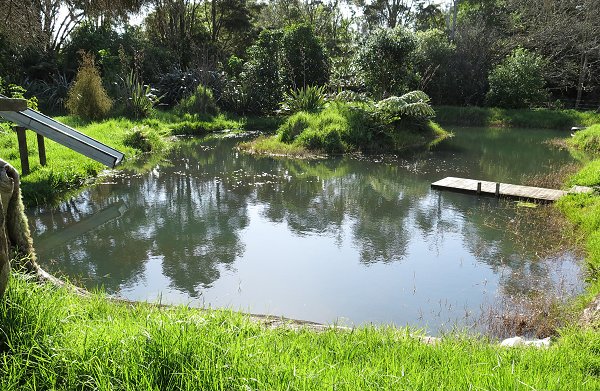 The sun glinting off a lot of leaves on the surface of the pond drew my attention this morning.  The native weed which appeared a couple of years ago has now spread across the bottom of the pond and there will soon be leaves showing across most of its surface.  I think some weeding will be necessary or it won't be so good for swimming. 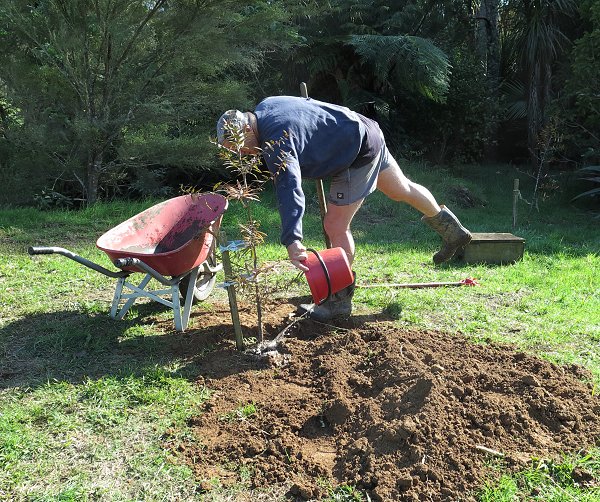 We buried the dead calf down in the native reserve area below the house, then planted a lovely Kauri tree on top. 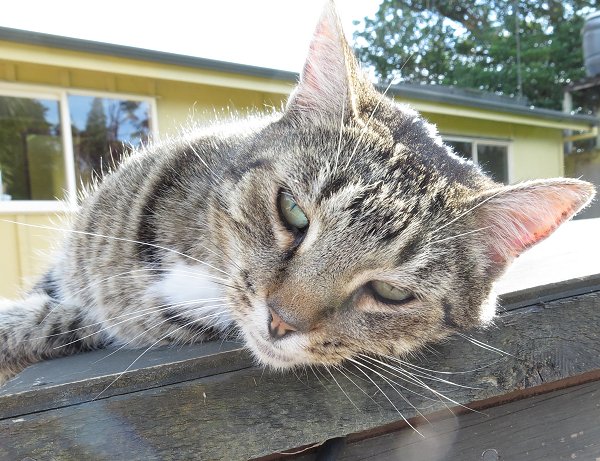 Finan has been looking off-colour for a couple of days and yesterday I became quite worried, so booked an appointment for him to see vet Fiona today.

Fiona thinks he probably has cat 'flu, with a high temperature and sore throat.  But during a routine check, she discovered that he has nodules on his right kidney, with cancer being the most likely cause.  Poor pussy.  She took a blood sample for testing, to see if there were any flags raised by that and to check his kidney function and sent him home without any sort of medication, since the usual treatment to make him more comfortable has kidney-function implications and we'd best not compromise him in that way at present. 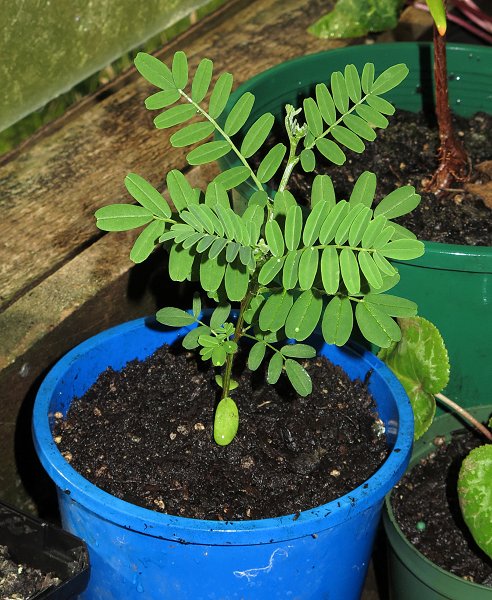 Several years ago Jill and Bruce gave me, as part of a birthday present, some packets of Native Seeds of Clematis and Fuchsia (which I didn't want to plant because I'd prefer to source seed locally and there are lots of each about) and Kakabeak, Clianthus puniceus.  When tidying up a couple of months ago we came across the packets and I planted them to see if anything would happen.  This one seedling emerged and I waited to see which plant it was: it's a Kakabeak!  It seems to be thriving, so I shall endeavour to keep it alive.  Apparently they're quite common as garden plants now, but very rare in the wild.  I'm not sure if they naturally grow in this area or not, but will find out. 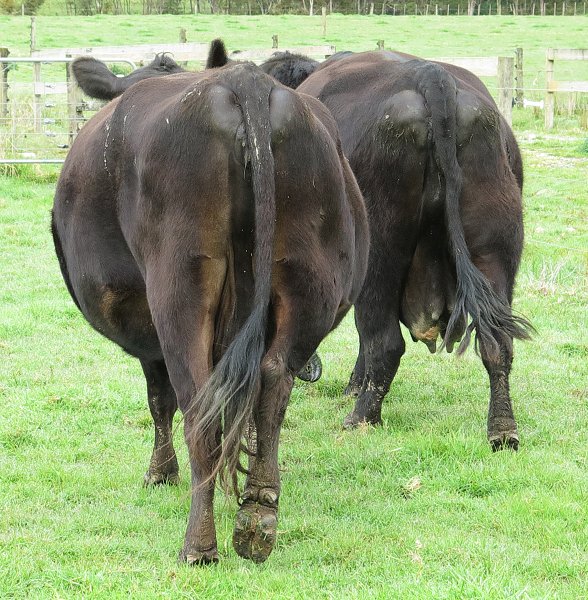 710 was pacing around calling again this morning, looking quite upset.  She was unsettling two-year-old 725 who was with her in Flat 2 (the other heifers are now over the road, but 725 looks like she'll calve quite soon).  I decided to move Zella and Imagen (fat bottoms pictured) out of Flat 1 so I could open the gates for 710 to go wherever it was she needed to.  I suspected she wanted to go back to where her calf was again.  When I opened the gates for her, she marched right out to the yards at the front and then back to the driveway where the calf had lain before we buried it, then sat there for a while with 725.  Eventually she seemed more settled, so I shut them back in Flat 1 & 2 again. 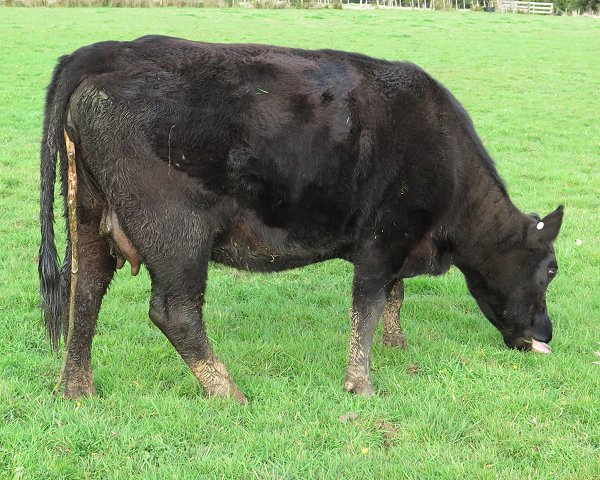 Later in the day the small amount of afterbirth which had appeared last evening, had lengthened to this.  The membranes sometimes don't come away very well when a birth has been premature or the baby aborted.

After dark I checked the goose eggs again with the torch and one is definitely dead.  It has floating masses and bubbles within and there has been a developing odour in the nest over the last couple of days.  I think that egg would explain it.  I'll break it open in daylight and see how far the chick developed before dying.