The week beginning the 27th of September 2014.
Saturday the 27th 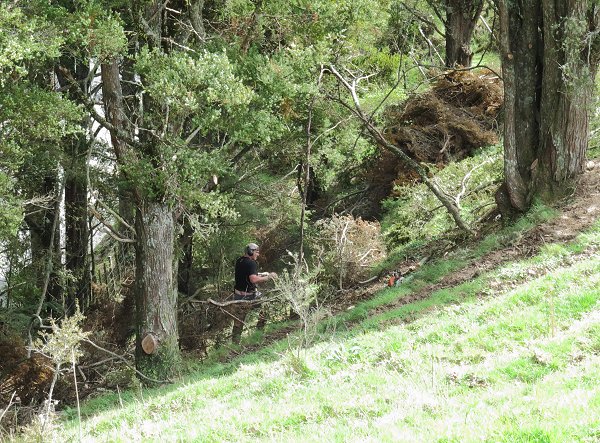 Stephan went back to continue clearing the slope where he nearly cut off his toe.  I worried.

When I walked around the hill after checking the heifers, I found him happily working; cutting, then throwing the prunings down the hill to where they'll be within a fenced area to rot down.  He found the branch which crushed his toe, cut the end of it off to bring home to create some sort of monument. 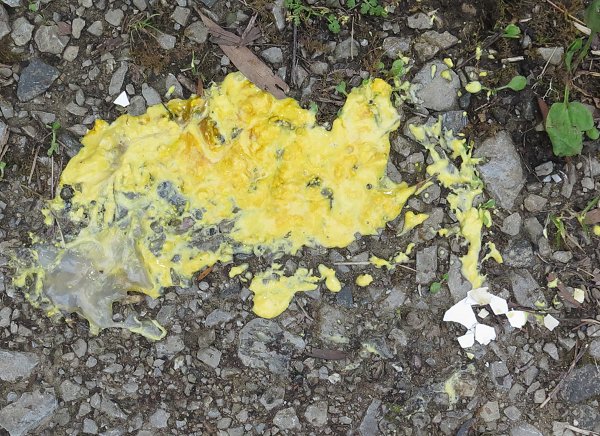 I broke open the dead goose egg and found nothing but curdled yolk and congealed bits of white.  The egg cannot have been fertile at all, despite its appearance on first candling (shining a bright light through it with the torch). 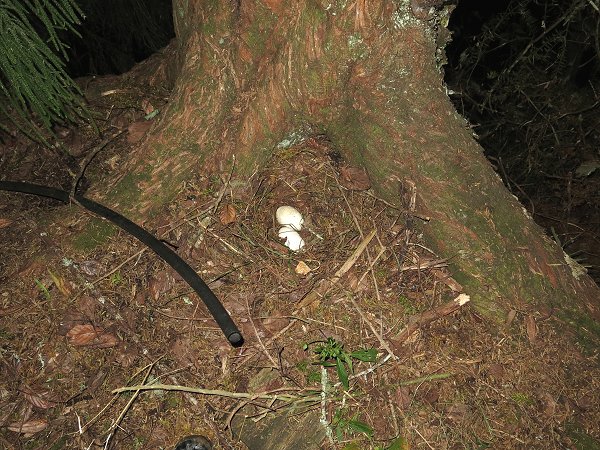 In the mean time, our goose has started laying, although it was only by observing her movements that we could tell where the nest was.  Before I uncovered them, the eggs were invisible under the leaf litter.

710's afterbirth has dropped away, so hopefully it was complete and she will now return to full fertile health.

I spend some of each day observing (and feeling if they'll let me) the development of my cows' udders, as an indicator of their progress toward calving.  Because I have not had veterinary pregnancy checks done, I'm working entirely on the dates and observations I made during mating last summer.  Some of my dates are not matching up with the advanced development I'm seeing and so I have been going back to the mating notes to see if some of the expected calving dates should be brought forward.

I've been finding it hard to settle down and get much done lately, but today is GST (Goods & Services Tax) return day for us, so I had to get some accounts sorted out.  Deadlines with financial penalties work quite well on me. 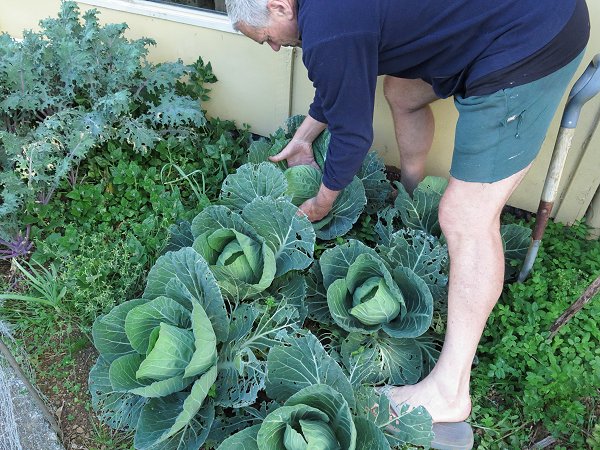 Stephan has grown these fabulous cabbages in the little garden along the front of the house.  They're just like bought ones!  Funny, that expression, when you think about its generational relevance.  People older than me probably wanted to make and grow things which were "as good as" anything commercially produced.  These days retailers want to convince buyers their products are "as good as mother used to make", which they never are, being highly processed or grown in unnatural conditions.

I really enjoy lightly steamed cabbage with butter - the real stuff, made by me!

In front of Stephan in the picture is Kale, NZ Spinach, perhaps a leek or two and behind him a lot of weeds.

I've lost my wonderfully warm possum/merino hat!  I still think it could be in the house somewhere, because I'm quite sure I walked home with it on in the rain yesterday evening and can't for the life of me think what else could have happened.  When I shove it into my pocket when walking, I regularly check that it isn't falling out, having lost hats in just that way before.  I knitted and then re-knitted that hat so it would be the perfect size and fit for my head.  I miss it!

Wednesday the 1st of October 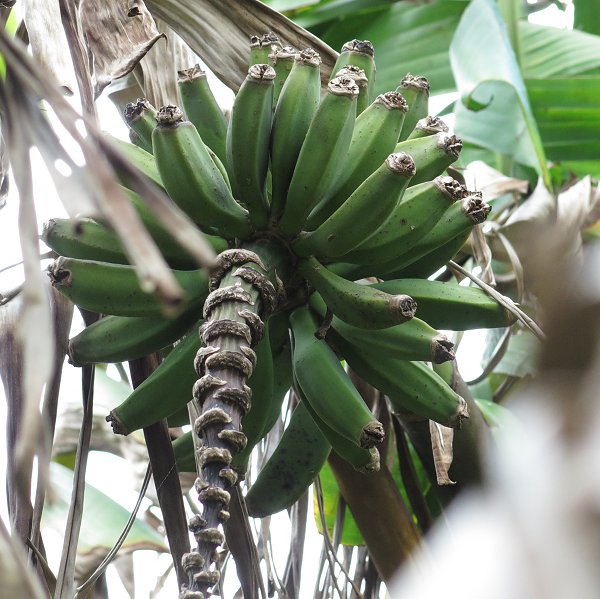 Our bananas are still hanging in place.  I don't know much about bananas and what their ripening process is.  We'll wait and see if these turn into delicious fruit sometime over the summer. 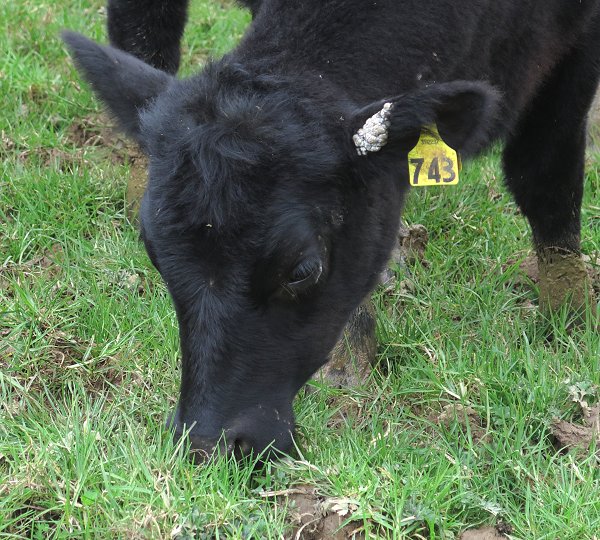 I thought 743 had mud on her ear, but on closer inspection saw she has an interesting cluster of warts.  There are a few spotted around on her face and neck as well.

743's grandmother had an impressive collection when she was young too. 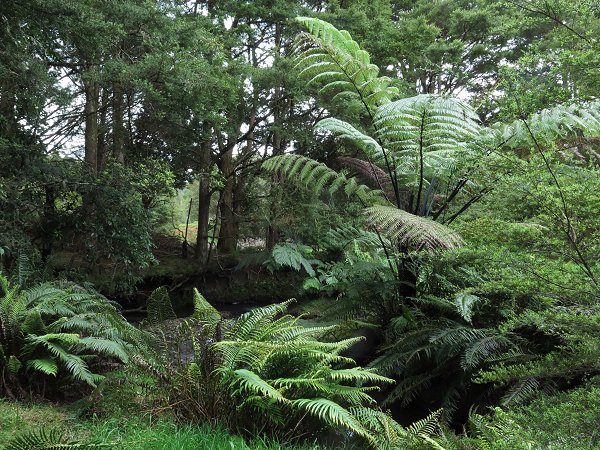 I came back via the Bush Flat reserve.  It's looking really lovely in there, after six years' exclusion of the cattle.  This is a bend in the stream, where tree and other ferns have grown along the riverbank now they're no longer browsed by the animals.

One of our up-the-road neighbours popped in to say hello and talk about her concerns about the logging activities which are about to start in earnest up the valley.  We all received a letter from the forestry company last week, saying they're now hauling road metal in to form their tracks (big, rumbling truck-and-trailer units have been up and down the road constantly for the last week or so) and will soon start cutting trees to continue the roading development, before clear-felling begins next April.  We're in for long-term disruption.  Many people living in the valley are very concerned about travelling safely on the narrow, winding road with these enormous trucks so frequently coming and going.

I'm not entirely sure there's much to be done about it, since as many of the sharp corners as can be altered have been, although I can imagine the installation of some size or pressure-sensitive warning lights on a couple of particularly nasty bits might be useful.  I'm not looking forward to all the dust and the intermittent noise takes some getting used to. 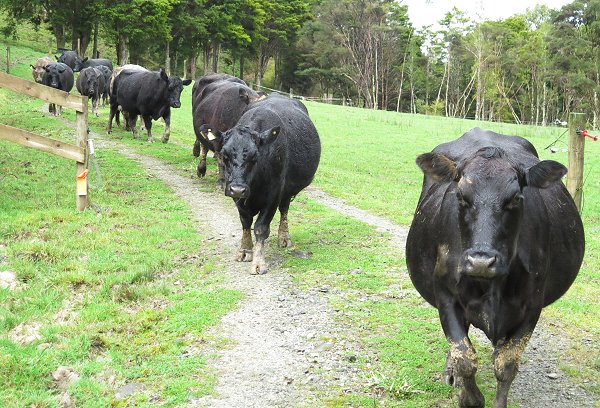 I became nervous enough about udder development to split some of the cows from the main mob and bring them in to the flats.  I really don't like it when they calve out the back; there are too many dangerous possibilities.  White-faced 517 is one of them because her udder is so hairy it's hard to tell how developed it is, and sometimes, like last year, it doesn't get really tight before she calves. 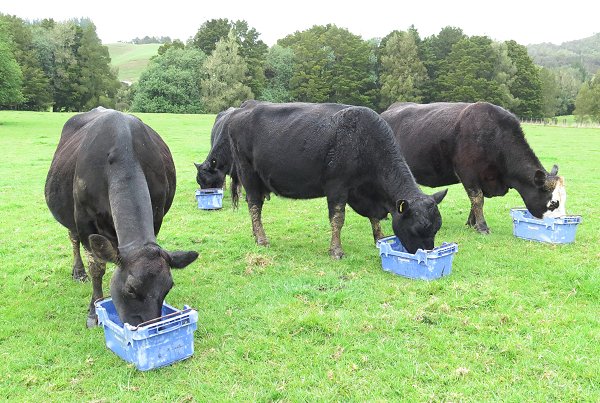 475, Dinky 94, 517 and 613 (at rear) having their first Magnesium Oxide and molasses for the season.  As soon as I appeared with the blue bins, they came running.  They never forget what they're for.

I combined my other two paddocks of two animals each, since they've been neighbours for a while and it makes it easier for me.  I hoped they'd behave well, since they're from different mobs: 725 and 710 from the heifer mob and 660 and Dexie 101 from the cow mob.  My biggest concern was for 725, the youngest of the group, but she sensibly maintained an unchallenging demeanour when the older two cows came through the gate.

I was out at 3.45am checking 725, but everyone was sitting around quietly.  I will get up in the early hours when any of the heifers look close to calving.  Hopefully they won't need me, but if anything goes wrong, at least I'll know I did all I could. 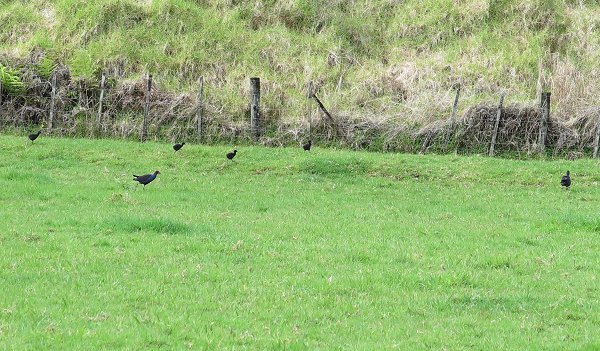 Four Pukeko chicks in the Pig Paddock, with two of their three parents.  They do quite well here each year, generally rearing all of their chicks.  The biggest danger to them is people driving too fast along our driveway, startling them into dashing through the fences, which can injure their legs. 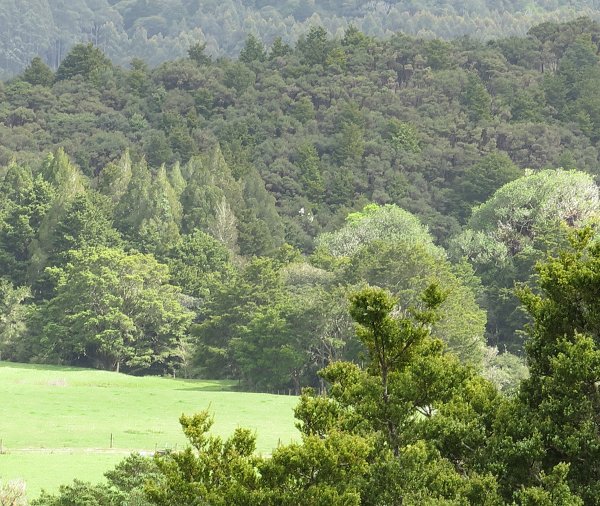 From the hill Over the Road I looked back to the farm and noticed one of the big Clematis vines in the Camp Paddock is now blooming - the white splash in the middle of the photo. 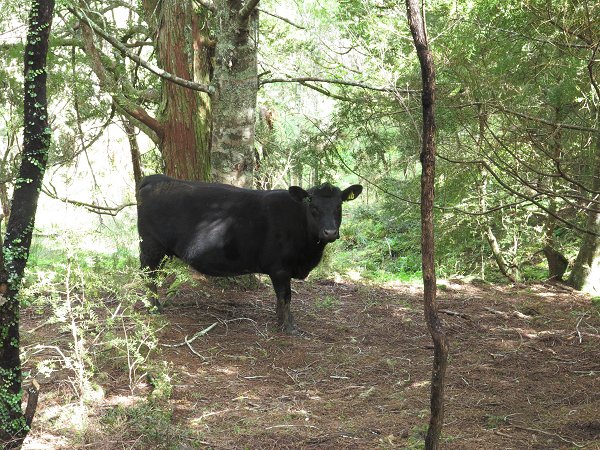 Ellie 119 likes this spot; I've had to look for her a couple of times in this paddock Over the Road and have found her quietly sitting or standing here on her own.  As one of Demelza's daughters, this is not surprising, since they all have a tendency to solitude.  I wonder if, when she's part of the cow herd in her adulthood, she'll join the family group? 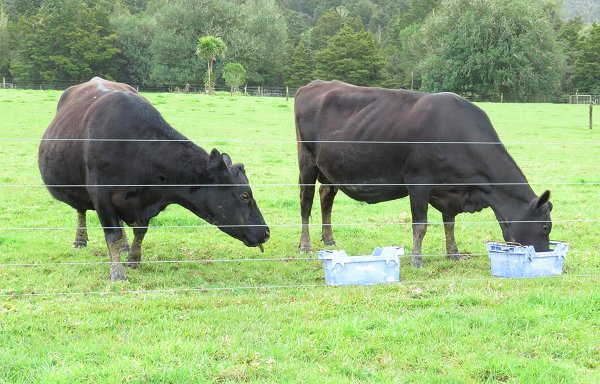 Molasses time each evening now includes Zella and Imagen.  Imagen is due quite soon, but Zella not for another month; there's no way I could give molasses to anyone in Zella's paddock without giving it to her too.  In this picture Imagen had already been displaced from her container and was very tentatively approaching from the other side, before again being bullied away from it by her wicked daughter.

My favourite hat turned up, under a bundle of Stephan's clean washing which one of us had dumped on a chair.  I'm pleased, having imagined all those cold nights out checking on calving cows, with cold ears.