The week beginning the 13th of September 2014.
Saturday the 13th 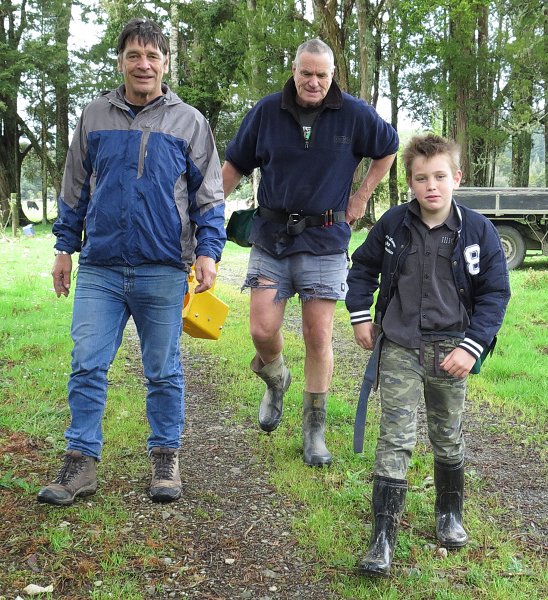 Stephan's brother, Edwin, up north for the weekend with his grandson, Nate, came to visit for the day.

We went for a walk around the farm, since Edwin hasn't been out there for years. 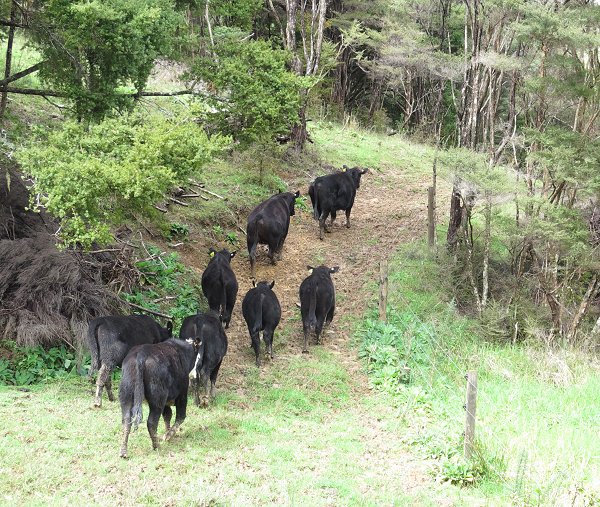 Finding some of the heifers I wanted to move, I walked them back along the edge of the swamp while the others climbed the hill and came down the other side.

I suppose all animals learn their own farms, but I do like knowing that these heifers spend their whole lives here, have been here since they were tiny and learnt the tracks and layout from their own mothers and sisters.  It's increasingly easier to get them to go where I want them, since they know it all so well. 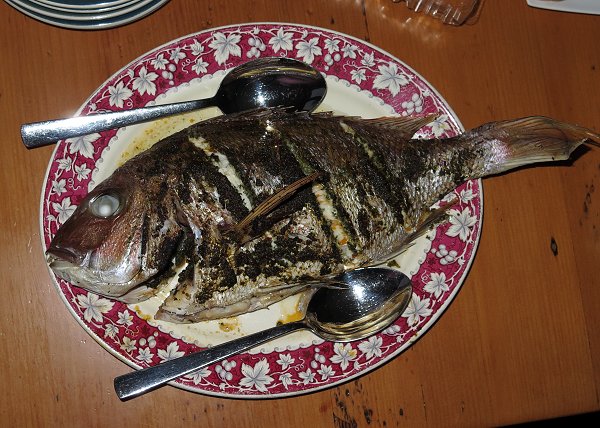 Elizabeth and William came out in the afternoon, to catch up with Edwin and join us for dinner.  William baked a Snapper he'd been given (I think, rather than caught himself) and we ate it as an entrée before the roast meal Stephan had prepared.  Delicious.

After dark I took Nate out with me to check on the goose eggs, which have been under their clucky hen mother for a week now.  We shone the torch through them and it looks like all three may have developing embryos. 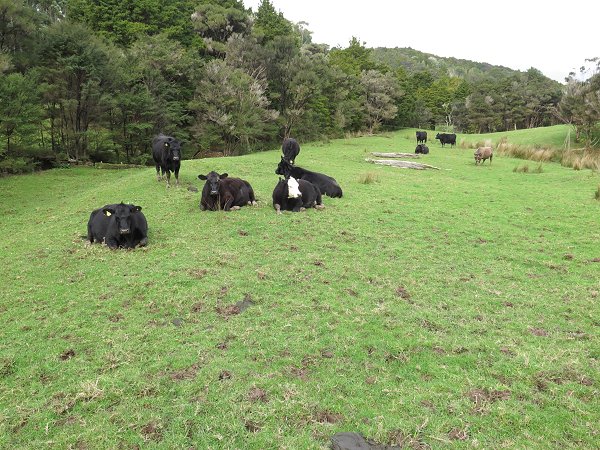 I like walking out to find the cows all sitting around relaxing.  Some were standing quietly chewing their cud, a couple grazing. 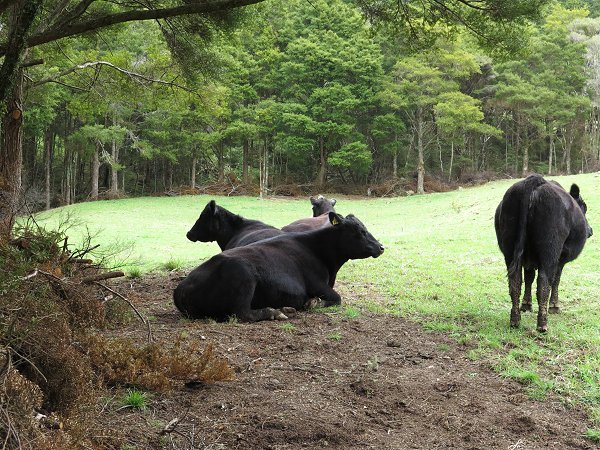 On the other side of the stream (to the left of the photo above) this little group sat.

The weather has been pretty wild and windy, with cold rain, so it's good to see the cows will still like to use these trees, now pruned ready for a fence to go in to protect the stream, for shelter.

We had notification from the Northland Regional Council today that they've approved a further 50% grant for the riparian fencing projects we have proposed for this summer.  Excellent.  We think we'll be able to finish fencing all the streams this year, although everything depends upon the weather and Stephan not dropping something on himself...

I went to knit with the Intermediate School class again today and they presented Lynette and I with a small gift each with their well-spoken thanks, since there's only one more week of term left.  I've really enjoyed (mostly) the interaction with those kids.  They're mostly open and fun and very bright in a variety of ways.  Some of them were frustrating and already infected with the lowered expectations of their community, but I hope we were as good for them as they were for us.

For the first time early ordinary voting in the national election has been advertised.  In other elections my understanding was that early votes had to be cast as "special" votes.  This year there's been a lot of publicity about the possibility of voting early in one's own electorate.  As I'm going away on Election Day, we went to vote this morning, so we don't have to allow extra time to do it on the way to the airport on Saturday.

I noted that it was light until well after 6.15 this evening.  The day length changes very quickly and noticeably at this time of year. 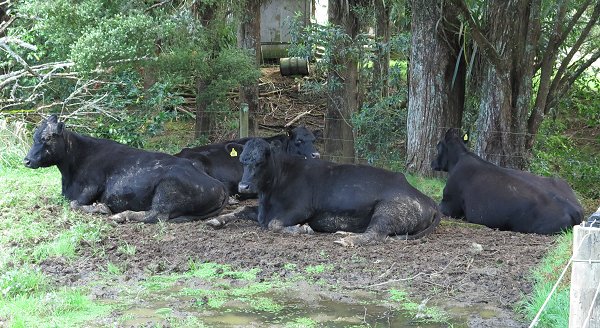 Demelza with daughters Eva and Emma facing to the left and sister Dinky facing to the right.  As often as not I find these four together as a family group.  Sometimes Dexie, Demelza's niece, will be with them too. 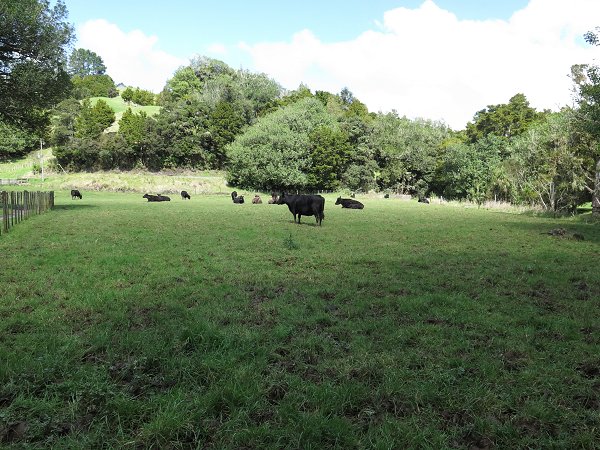 The rest of the mob were sitting around out on the grass in the Pig Paddock, until I walked out to call them in to the yards to give them their last copper injection before they calve.

As I finished and let them out of the yards, it occurred to me that it would be sensible to put the tick pour-on on them, but one is not supposed to apply other treatments at the same time as copper.  Knowing that many people actually do and figuring that part of the warning is to avoid creating stress, I decided I'd quietly move amongst them in an open area and apply the pour-on before they went back out to their paddock.  Unfortunately a couple of still skittish cows didn't like the idea much and I had to aim carefully and squirt from a couple of feet away to get the right dose along their backs.  Should have done those ones in the race.

I've only started using tickicide recently, since the new variety of the tick-borne parasite Theileria appeared in Northland.  As far as I know we don't have Theileria in this herd, but keeping a lid on tick numbers is wise, particularly as their numbers noticeably increased in the last couple of years, after warmer-than-usual winters.  In some herds, Theileria has killed many cattle. 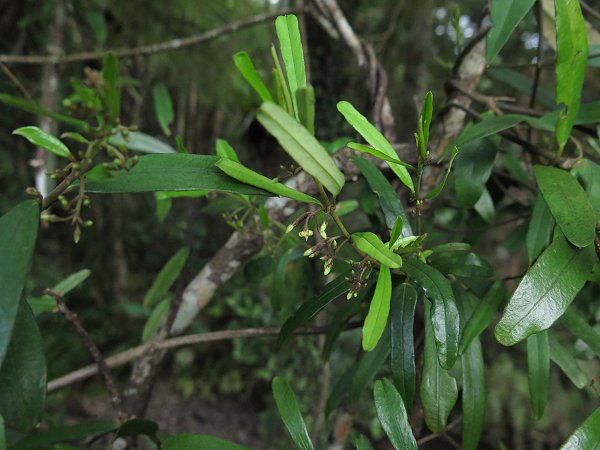 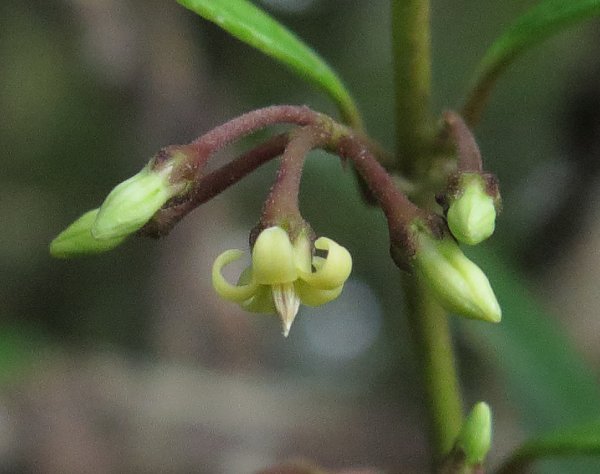 I am still unable to detect any scent from the tiny flowers. 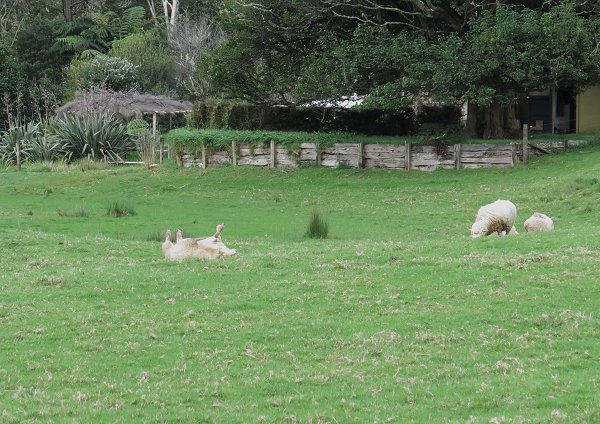 This happens far too often, whenever the sheep are in the House Paddock.  I've had to turn this ewe over twice on some days.  She doesn't seem to get stuck when they're up in their other usual paddock.  Sometimes it's her sister instead and sometimes my approach is enough to prompt her to really put some effort into struggling and roll over and regain her feet on her own.

I was following the heifers along the lane (bringing them to the yards for a tick pour-on), so I hopped through the fence and righted the ewe, before we continued on our way. 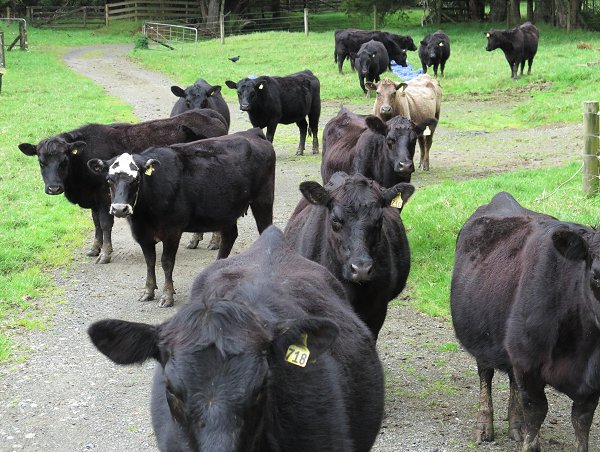 I brought the heifers back in today for their copper injection, thinking it would be good exercise for them to come twice in two days - both physically in their late gestations and mentally as practice in case any of them needs to come to the yards during calving.

To make them feel happy again afterwards, I set up the blue bins with some molasses.  The older heifers, who already know about them, were straight in as soon as they saw them, but the two-year-olds have yet to learn about this annual delight.

When I start separating the earliest-to-calve, I'll give them a daily dose of Magnesium Oxide mixed in the molasses, to ward off metabolic problems. 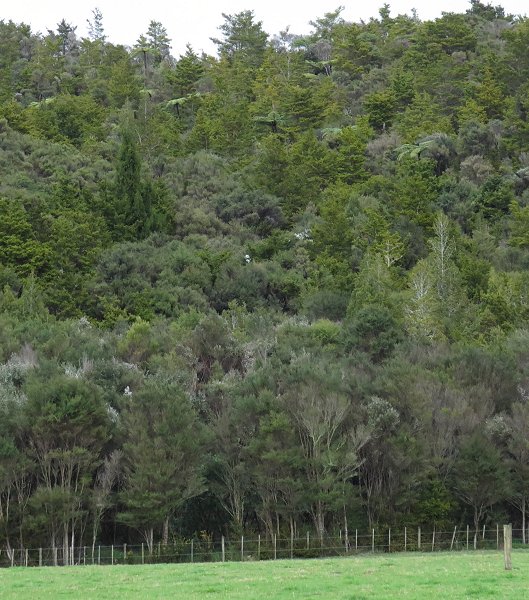 I was beginning to wonder when the Clematis would start flowering in the tree-tops around the farm.  I've seen four plants so far up in that Bush Block and some more appearing on the other side of the farm as well.

A couple of plants I know of have died; perhaps the two very dry summers put to much stress on them, but others appear to be gaining size and strength from year to year.

I'm off to Auckland tomorrow, so spent my day writing an article and planning the cattle movements for Stephan to take care of things in my absence.

I'd have liked to vote today, on the 121st Suffrage Day, but getting in to town today wasn't going to be possible.  Normally the elections are held in November, so the two events don't often coincide.