The week beginning the 6th of September 2014.
Saturday the 6th 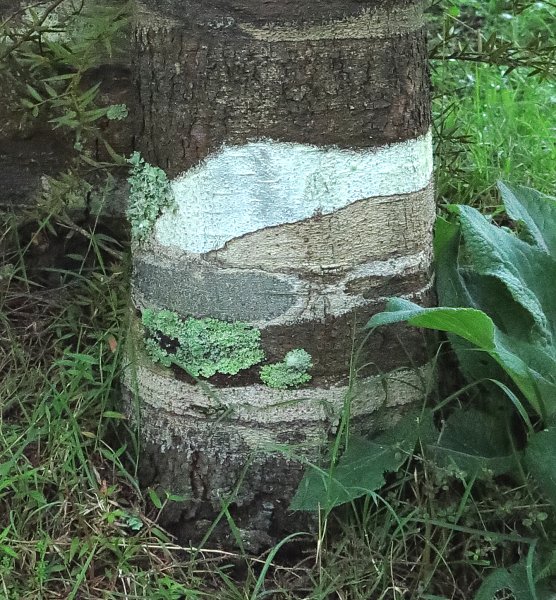 Isn't this beautiful?  It's the base of one of the Kahikatea trees in the Mushroom 2 paddock. 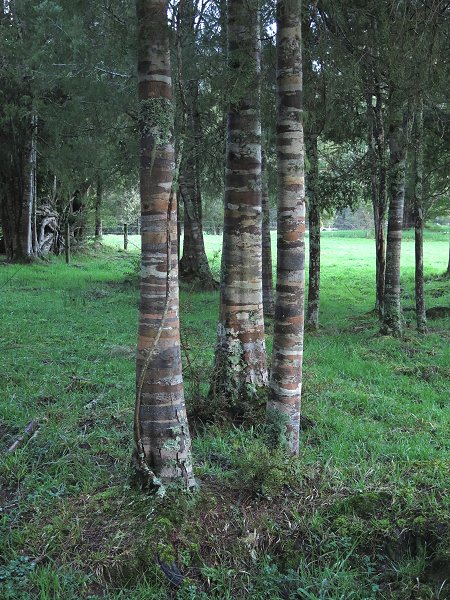 The young trees have banded trunks for many years before they fully mature, when the bark becomes grey and scaly. 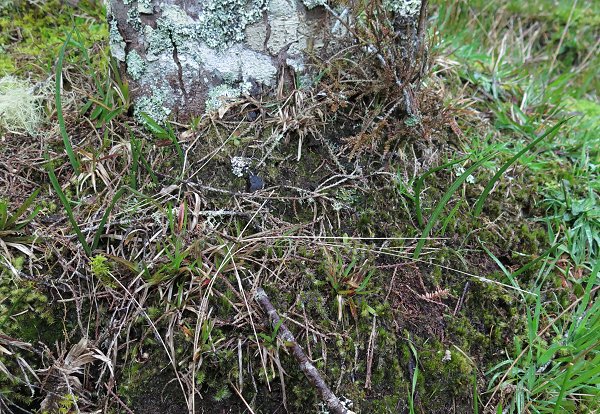 In a boggy part of Mushroom 1, there are a number of Kahikatea and Kanuka trees which have formed their own solid little islands above the wetter ground and on those grow an increasing number of Sun Orchid plants.  They are the thick, dark-green single leaves in this picture. 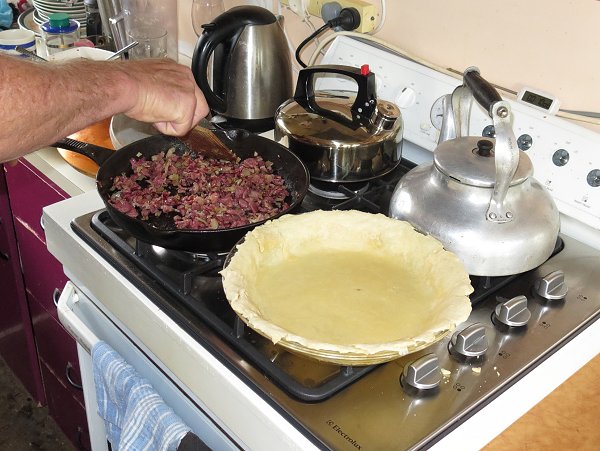 Stephan makes an exceptional Bacon-and-egg pie.  Our friend Gillian came out for lunch, so Stephan cooked one this morning.

There are three kettles in the picture!  In the foreground the old Aga kettle from Muriel's wood-range in Brecon, Wales, which we now use on our fireplace in the winter evenings (and it came out here last night with hot water to make a cup of tea); the shiny whistling kettle is a very recent purchase, bought because it's probably much cheaper to boil water on the gas stove than it is with the electric jug, the third in the picture.  We're both absent-minded enough to go off and leave water heating, so bought a whistling kettle to avoid disaster.  On the wood-stove in the evening, it doesn't matter much if the old kettle boils for a while; it would never get so hot it harmed anything, even if it did boil dry.  But leaving a kettle boiling on a gas stove would be wasteful and dangerous. 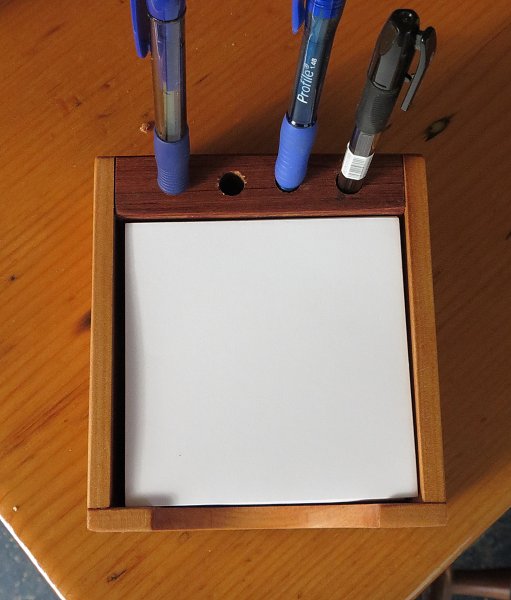 For some years I've been enjoying twelve days of birthday each year.  Traditionally there were twelve days of Christmas, so it seemed only reasonable, especially with my birthday on the twelfth.  Stephan presents me with a small something each day - I forgot to write them all down, but they've included a block of white chocolate with Macadamia nuts, a packet of spring-loaded paper-clips (I am a stationery fanatic, so rather like such things), a few things I'd spotted over the last couple of months and suggested Stephan add to the collection and a cube of note-paper, with which I didn't really know what to do, since if I'd opened the wrapping, it would all have been loose.  Today it reappeared in this rather fancy little box Stephan made out of Kauri and Rimu (from recycled timber, of course). 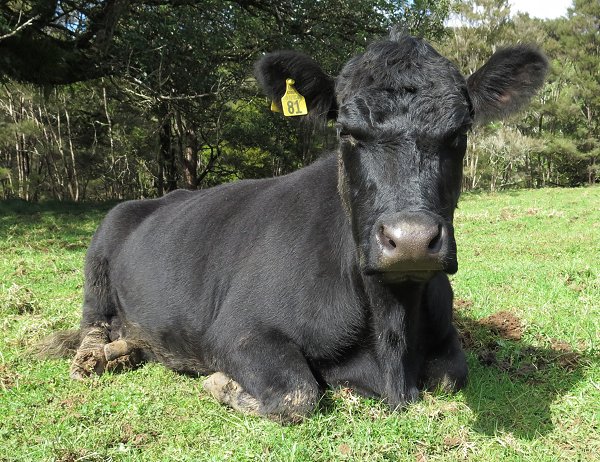 I've been thinking it must be time to set up the Calving Date Competition for the year.  Eva doesn't really care either way, but she'll soon be the focus of world-wide interest, as throngs of people enter their date guesses and then watch, on tenter-hooks, for the news of the birth ...

With next week's page, I'll set it up and you may enter then. 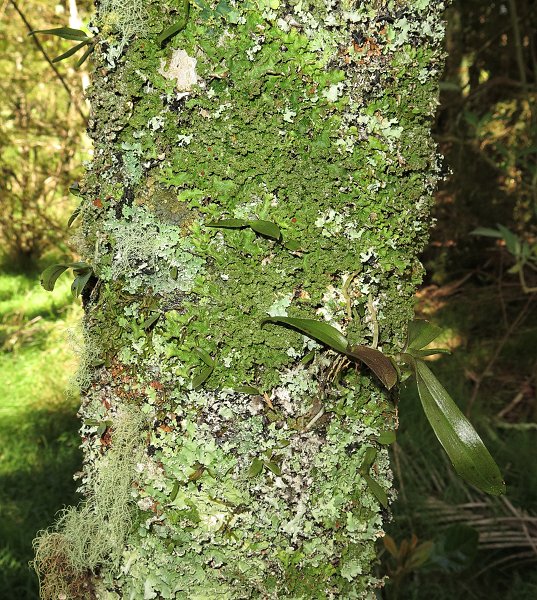 Drymoanthus adversus, the Green Fleshy Tree Orchid, where I first ever saw it on the farm.  Now there are several plants on this tree trunk.  They turned out to be extremely common, particularly on the horizontal branches of Totara trees, but when I first saw this one, I hadn't noticed them anywhere else. 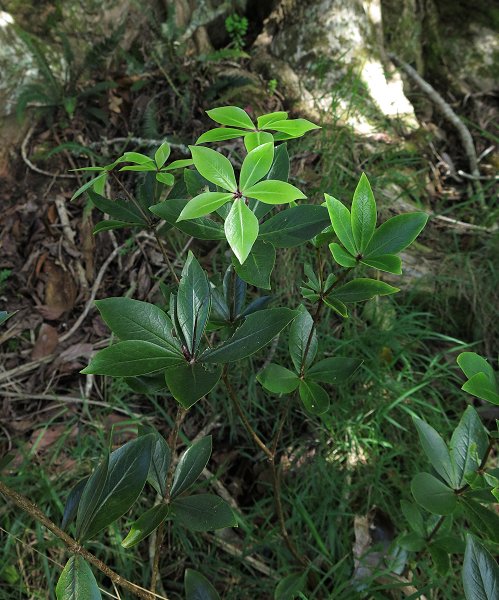 The Pittosporum cornifolium I discovered early last year is still thriving in the PW reserve.  I wonder how big it will grow and whether it will take a different form as a terrestrial plant, from its usual epiphytic growth? 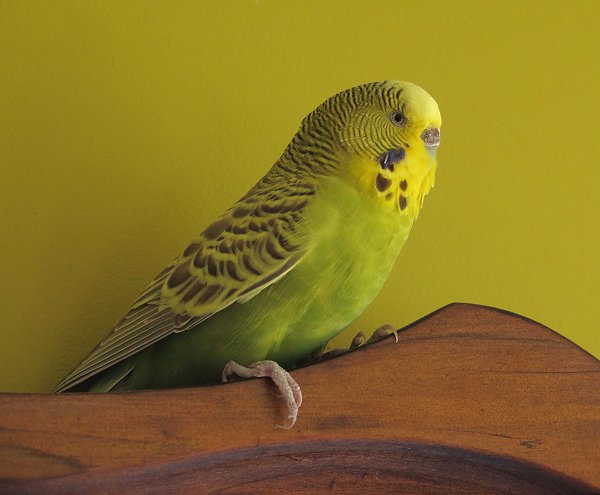 I let the budgies out for a fly around the living room while I cleaned their cage.  This is Poly's first time out since she came, since I wasn't sure I'd be able to get her back into the cage again.

It's good to have a bird which matches the décor.

I caught her with an over-the-bed mosquito net, which was a fairly peaceful way to do it. 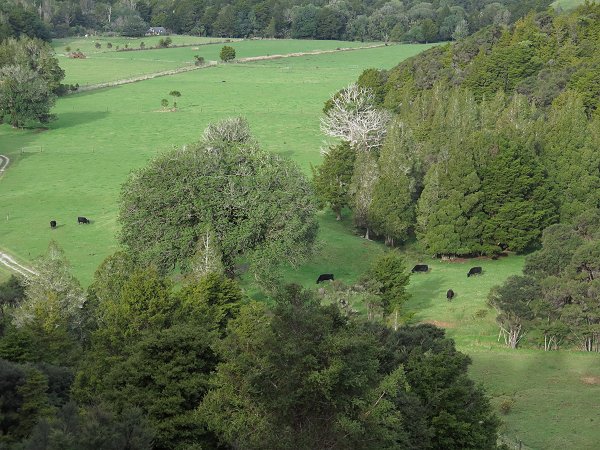 I climbed the fenceline between the Big Back North and the Small Hill and looked back down on the cows I'd just moved into the Mushroom 3 paddock. 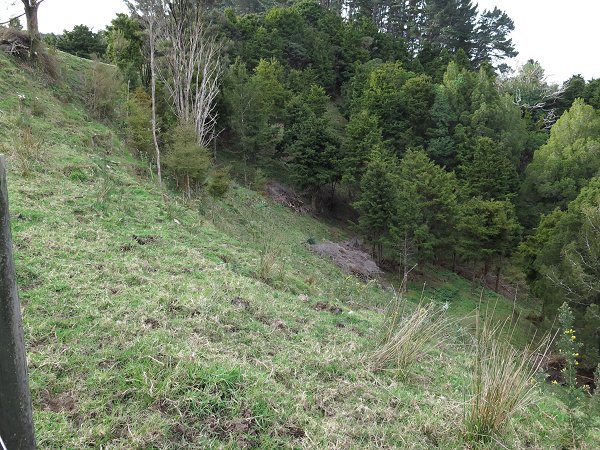 Looking to my left, the steepness of the Small Hill shows how one gets so high so quickly.  This is the area Stephan was clearing last year.  It looks like the cows have been grazing right up here, which is good.  I think they're coming further up the hill more often, now it's a bit clearer and there's more grass here. 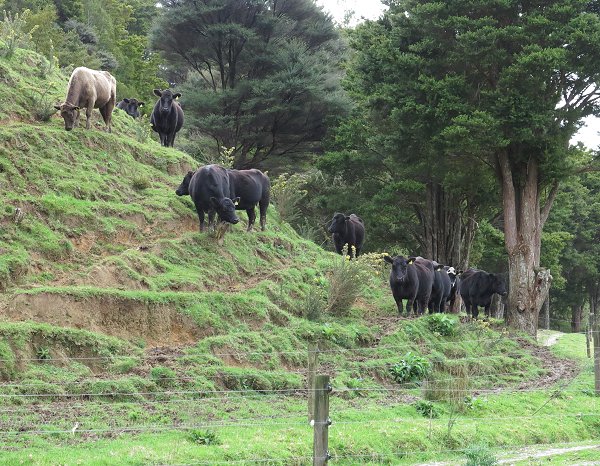 The eighteen pregnant heifers, waiting for a move from the PW.  I'm starting to move them around a bit more quickly now, on the basis that the grass must soon begin to grow faster.  They also need improving nutrition in their last few weeks of pregnancy. 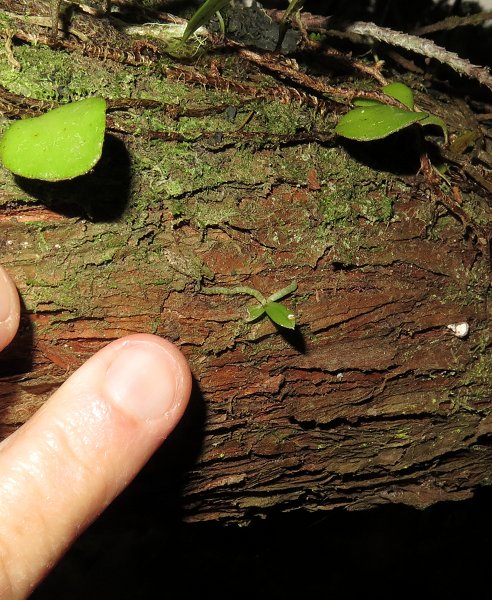 A minute Green Fleshy Tree Orchid on a Totara branch, where I know to look for them. 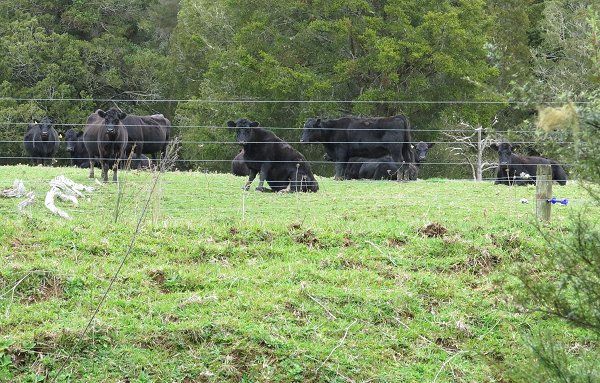 Cows look funny when they sit like this.  They don't do it very often, presumably because it's not overly comfortable.  The cow is Ida 75. 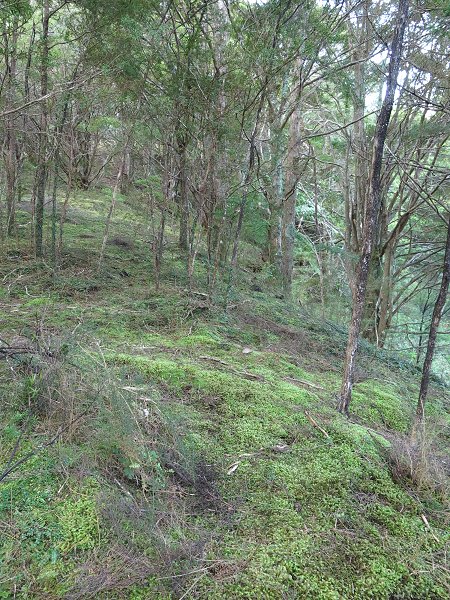 I was walking around the Big Back North slopes, looking for heifers this afternoon and wandered down this slope of Kanuka trees and thick moss on the ground.  Growing out of the moss in several places, were Sun Orchid plants.  I doubt the flowers will open here, in all this shade, unless the sun filters through sufficiently in patches.

Stephan went back to the gym today, to buy his own membership now that the treatment/recovery-funded one has ended.  His toe still hurts and having had so many months of inactivity, he was finding the fitness regime of his gym workouts were helping with his farm work.  Hopefully he'll be less prone to muscle pain or injury if he's keeping everything strong.  Having been an extraordinarily strong and physically able person throughout his life, he's probably more likely to injure himself as he ages, trying to do everything he was used to doing before, so this might well be a sensible investment.
Not that he's getting old, or anything.

On the subject of getting older, I spent my special day pottering about doing not a lot in particular.  It was very pleasant.  In the late afternoon I spent a couple of happy hours in my greenhouse, repotting plants and generally tidying.  I had a couple of new 50 litre bags of potting mix, which will keep me going for a while.