The week beginning the 3rd of December 2016.
Saturday the 3rd 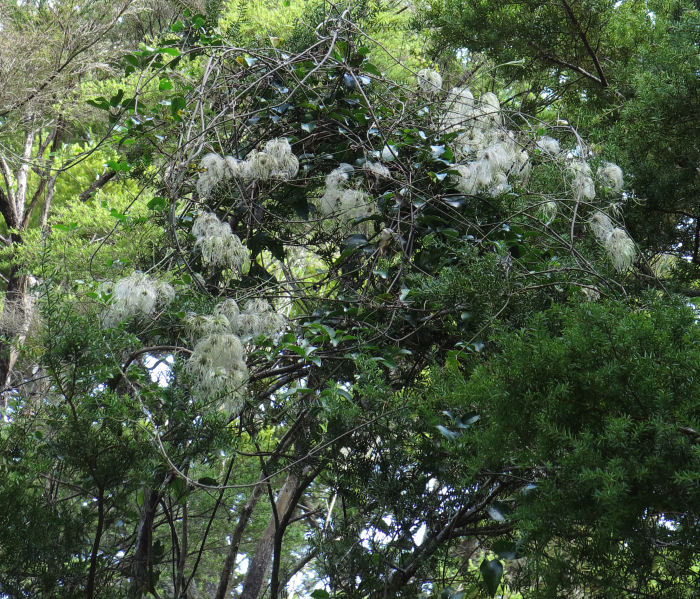 The seed heads of the native Clematis, Clematis paniculata, Puawhananga.

We went to a funeral this morning, of a man my family had known for much of my childhood.  I had a terrible crush on one of his five sons when I was about 11 and for a few years through the rest of school.  I spoke to him today and got ridiculously tongue-tied, which I found, in the moment, somewhat embarrassing but afterwards highly amusing.  Sometimes I don't seem to do "adult" very well. 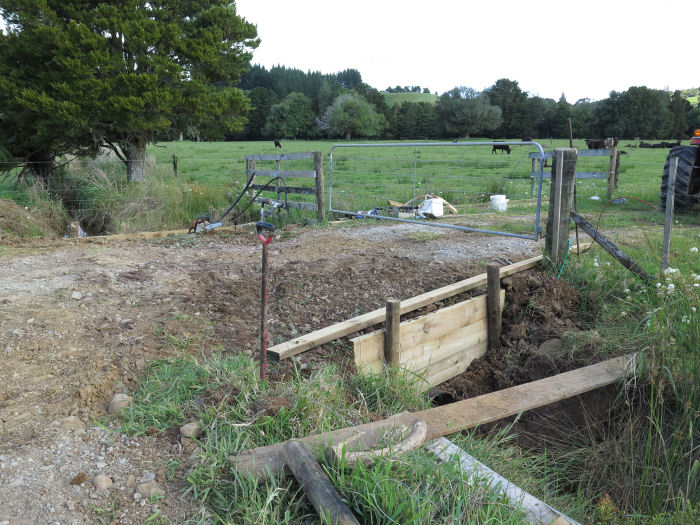 Stephan got to work this afternoon, setting the ends of the replaced culvert. 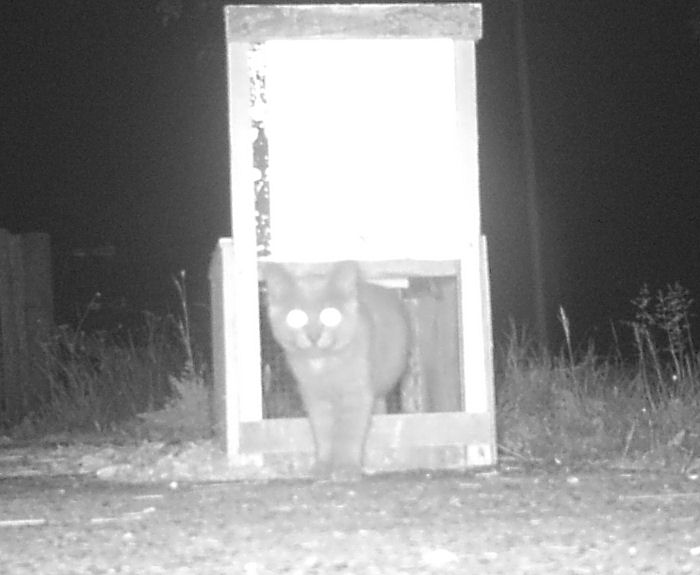 3.20am, proof that the live-capture trap isn't working! 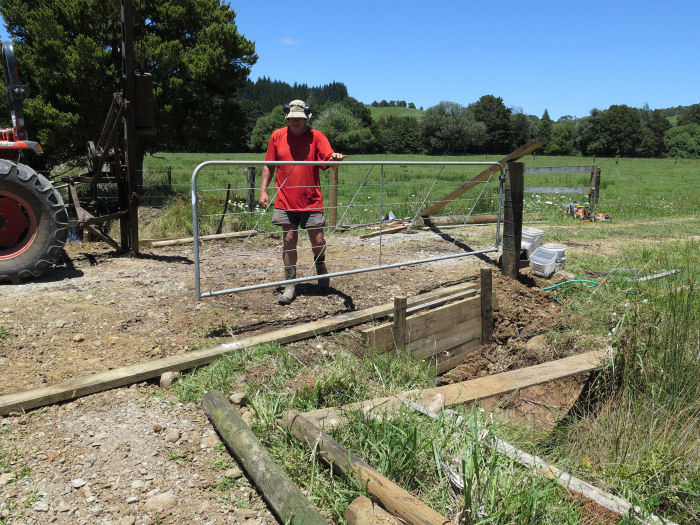 A well-hung gate is a pleasure to behold.

Every one of the orchid plants along the fallen Puriri log in the big swamp has flowered and I saw not a single one bloom.  I counted over sixty plants here.

It's good to see that so much seed will be spread from these plants, that they were not all eaten by possums or rats. 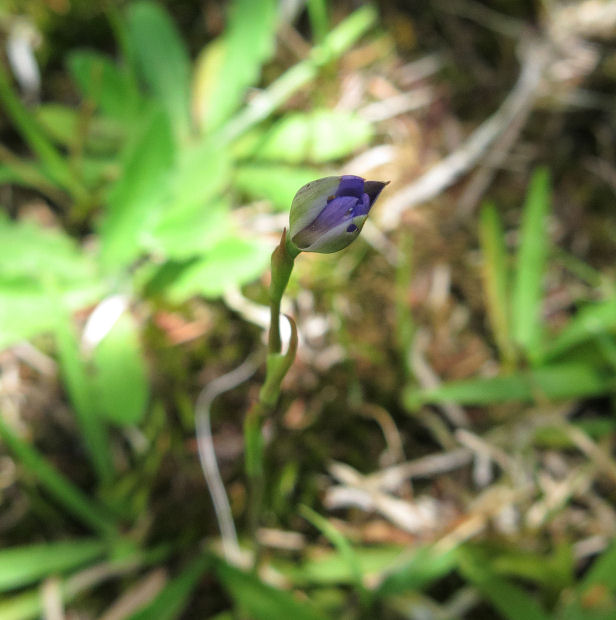 One orchid, almost open.  It's far too cool for them this spring. 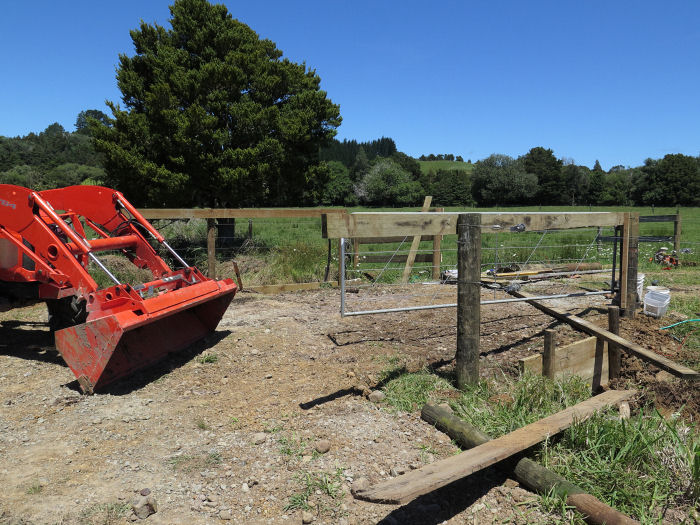 Back after my orchid-spotting walk to find Stephan had posts and rails in on either side of the new culvert. 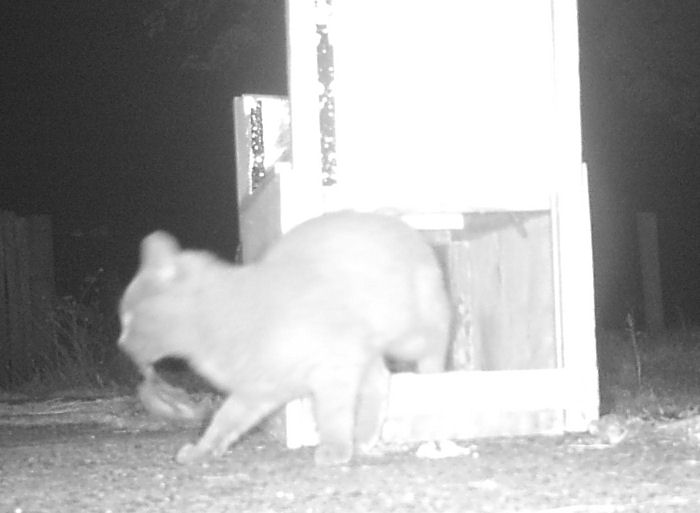 Stephan did some work on this trap during the day and set another trap against the other end.  This evening at 10.25 the cat went in, pinched the bait and got away again! 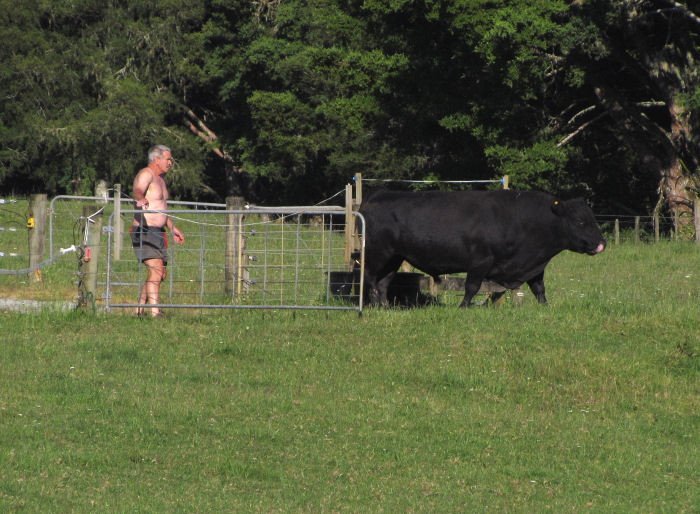 A hot morning, a hot cow (Zella) and an enthusiastic bull.

Stephan went up to get the bull out of Flat 1 and put him in with the house cows to get Zella back in calf.  Her gestation period is long (283 days on average) and it would be helpful, in case we need colostrum for other calves, if she calves early in the calving season. 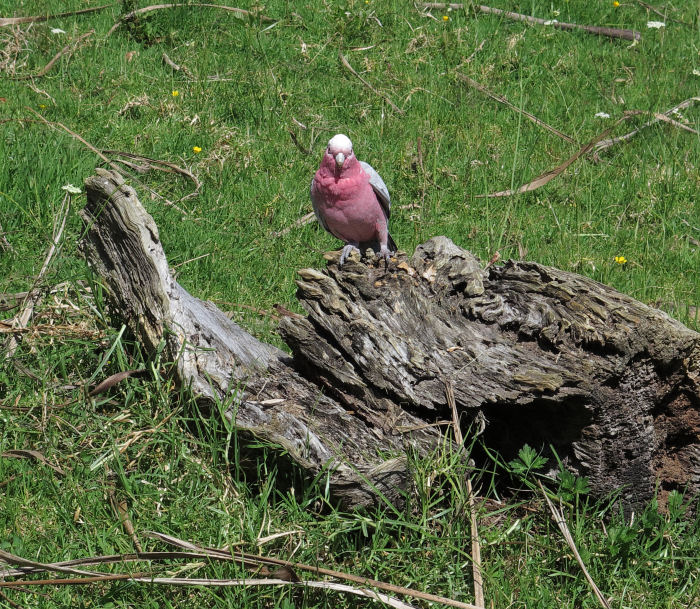 Floss, on an outing.  Sometimes I lose track of her and have a few moments of panic about where she might have gone.  She doesn't always answer my enquiries as to her whereabouts.  I know there are stoats and feral cats about, so don't let her out of sight for too long. 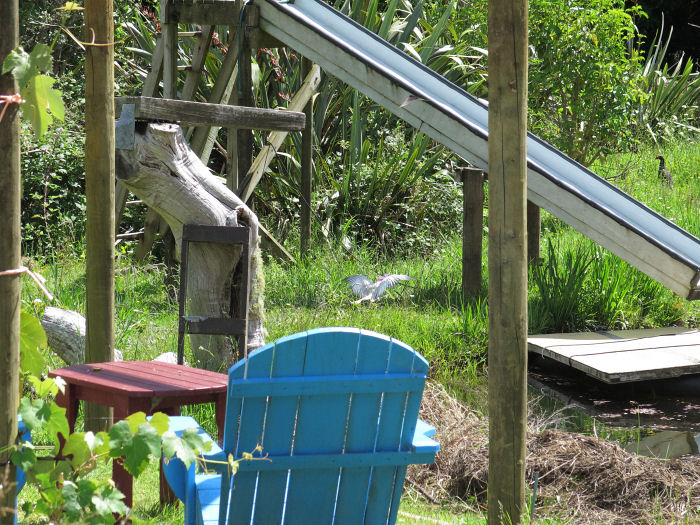 Those wings need clipping again, obviously!  I try to leave her with sufficient feather mass that she can flap down out of the Puriri tree without hitting the ground with a bump but not enough to carry her out across the paddock.  When she does that, she can go an alarming distance and getting as far as the trees on the other side of the stream would present some problems, both in getting her back and in terms of danger from predatory species.

If I knew she'd always find her way home after a flight, she could grow her wings and freely fly.  But landing anywhere but near the house could be extremely dangerous: other people have dogs, cats, and everywhere there are stoats and they're fast and deadly. 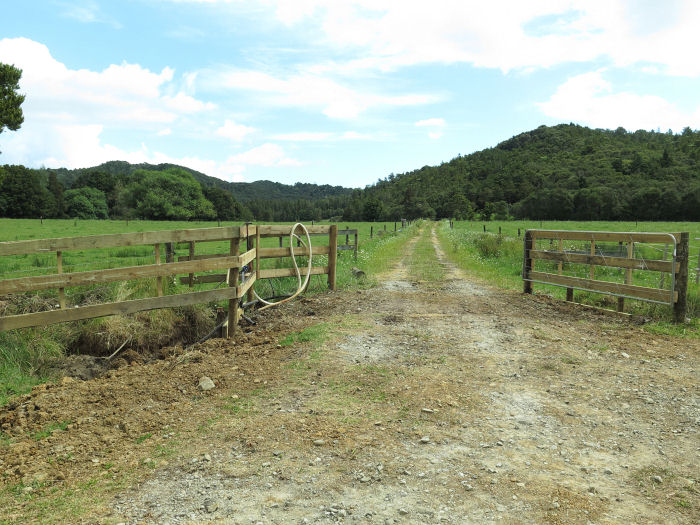 The track culvert replacement is now finished, with much better alignment of the rails and gate.  It'll take a bit of time for the ground to settle properly and it will need more lime-rock over the top at some stage.

The big hose is for filling the spray tank from the high-pressure water outlet. 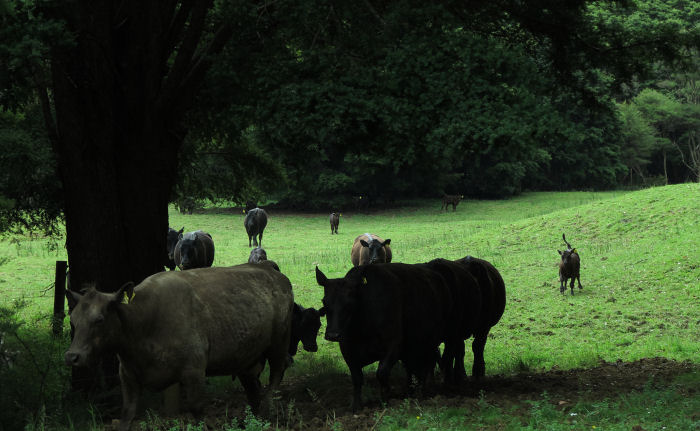 I left the cows and calves in the Back Barn paddock for longer than I intended and there's nothing left to eat. 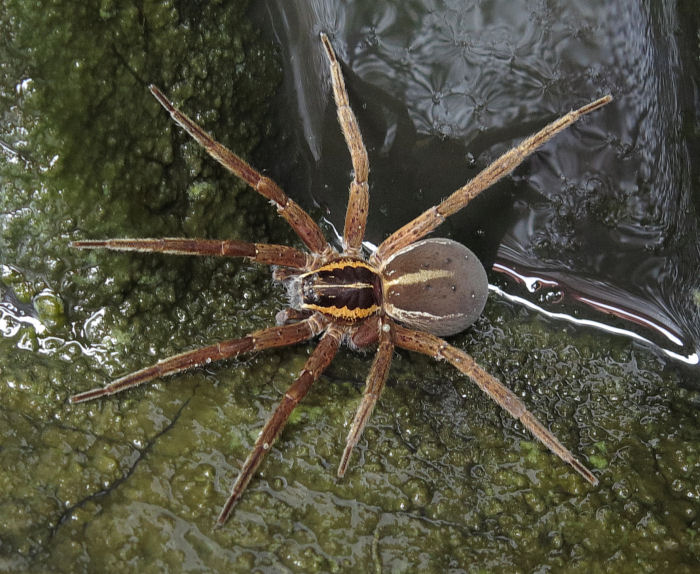 A beautiful water spider, Dolomedes aquaticus.  They must hide up under the rims of the troughs because I don't usually see them until I start emptying a trough and splashing a bit of water around. 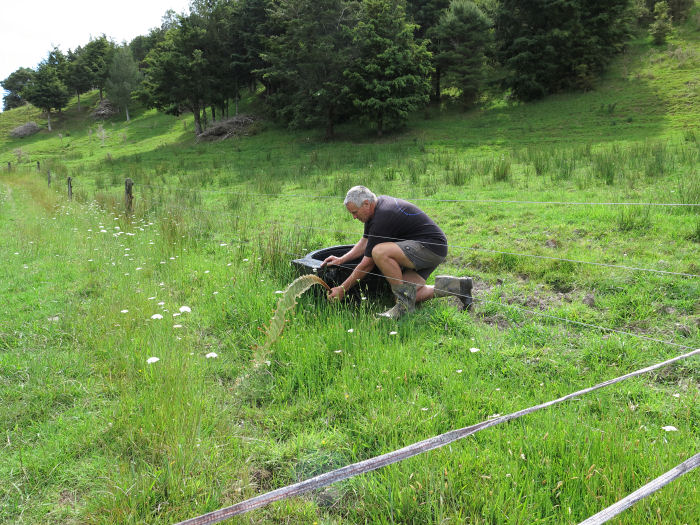 The trough, in the Small Hill paddock, has been filling extremely slowly.  On taking the ball-cock valve apart, Stephan found some small stones and the pipe full of silty water.  There is no fine filter in the waterline, so small stones can come down and this sort of clearing is necessary from time to time. 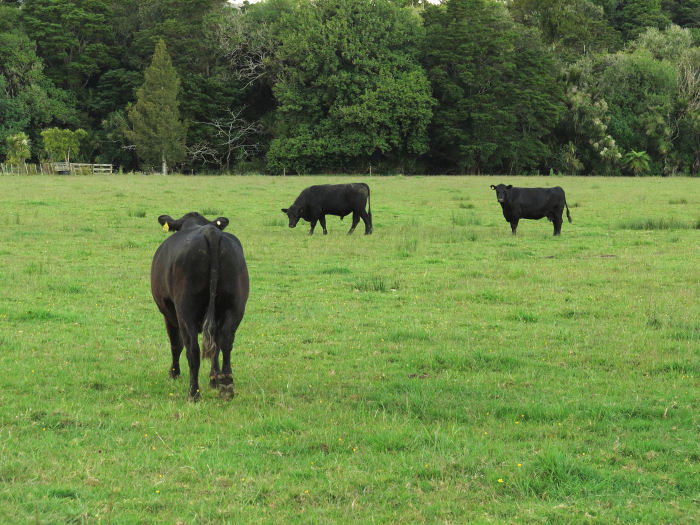 It was with surprise and great relief this afternoon, that we heard that the Prime Minister had announced his resignation.  John Key, erstwhile merchant banker, had turned our society into New Zealand Inc., focused entirely on economic priorities and individual advancement - at least for those with resources enough to be part of the game.  His own stance on any matter of importance appeared to change with the winds of popular opinion; he behaved in Parliament like a smart-arse, bullying school boy, engendering a mean-spirited, nasty approach to debating in the House.  Yet the majority of our society appeared to see him as a good-humoured nice guy.  Here we continued to see the awful effects of undermined communities, an increasing disparity between those who had far more than they needed and others with far too little, and a spreading hopelessness leading to ever-increasing suicide numbers, particularly among the young and Māori. 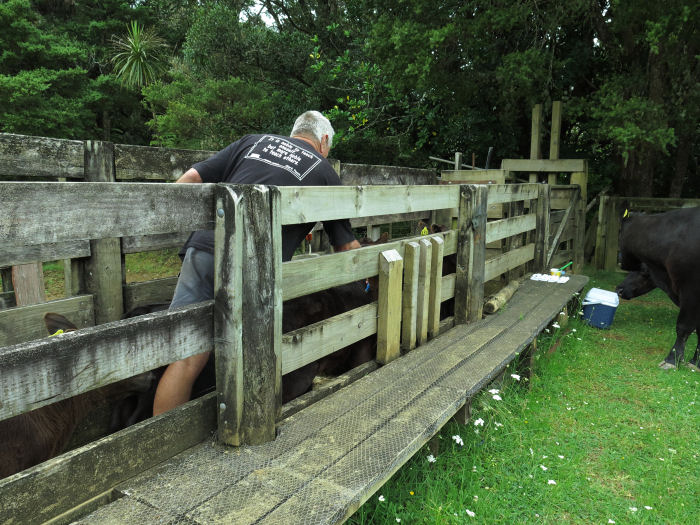 Summer is nice, with its increasing day length.  I went out for much of the day and when I came home in the late afternoon, there was still time to do some useful work.

We got some of the cows and calves in to do the first 7in1 vaccinations and castrate those calves who should not be left as bulls.

Their NAIT tags also went in. 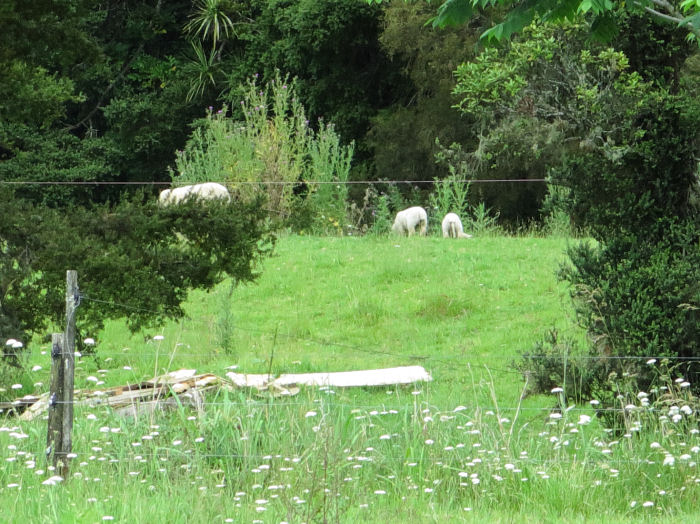 Across the stream from the yards I could see the two lambs, one with a shrunken tail still attached, the other without. 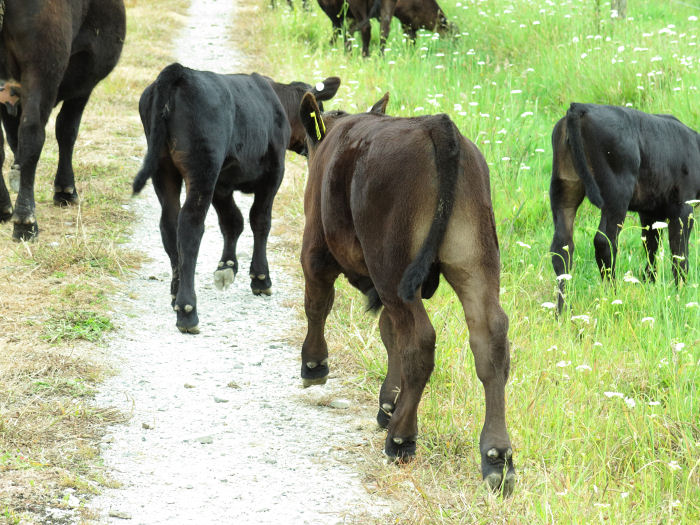 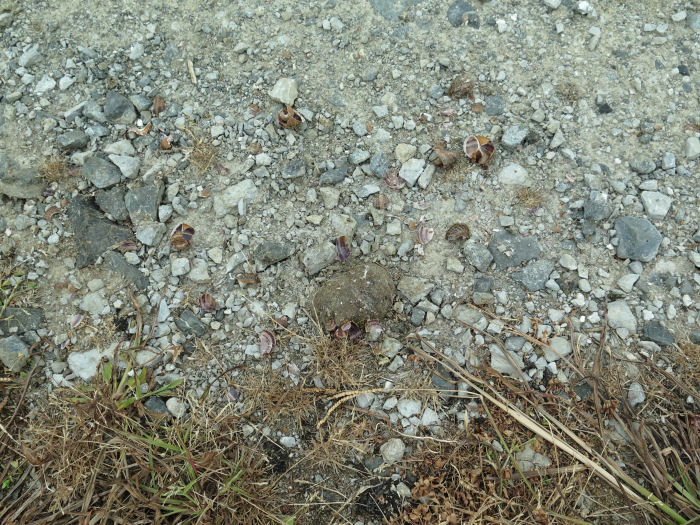 A Thrush anvil stone, surrounded by smashed snail shells.  These collections are obvious along the track, if you look for them, usually first seen because of the darker colour of the anvil stone, coated with the sticky remains of snail. 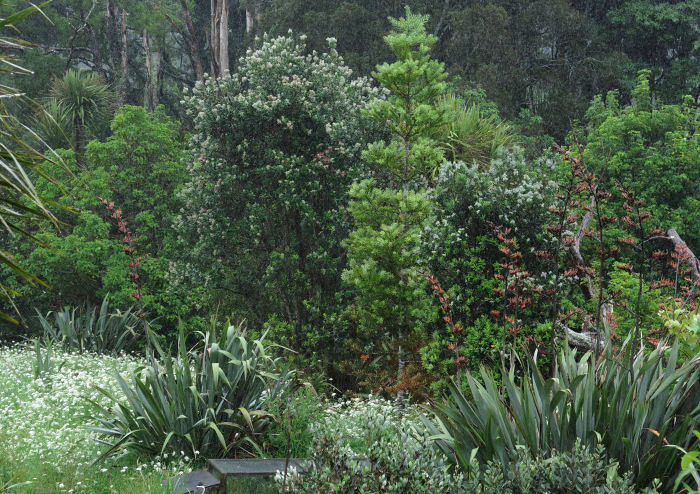 Our native tree area around the pond is growing beautifully.

It rained overnight and for most of the day.

We had no electricity for most of the day, some idiot having shot at a number of glass insulators on pylons further south, just before 3am.  It took some time for the fault to be found and power restored just over twelve hours later. 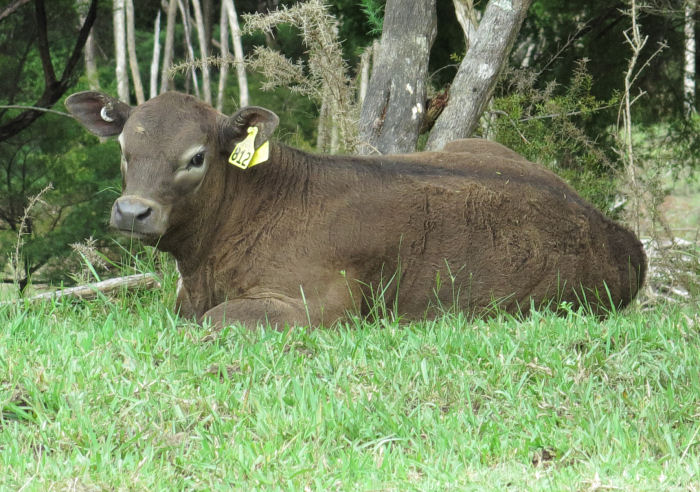 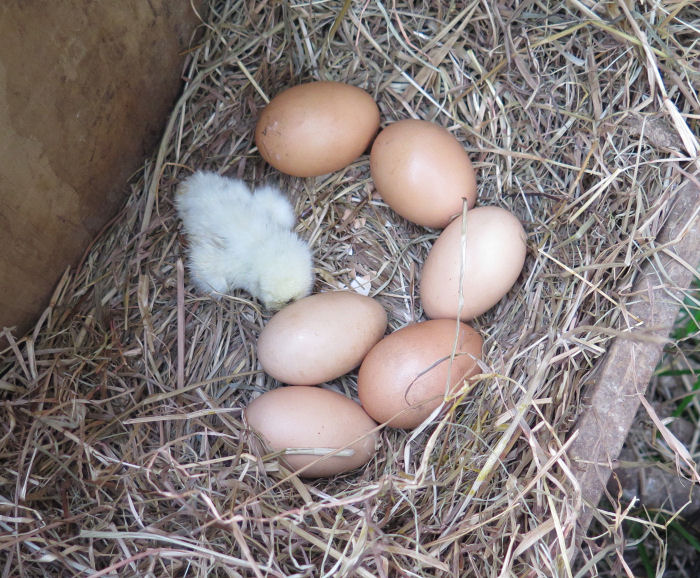 Three weeks ago we set these eggs under our oft-clucky hen and today this chick hatched.  The other eggs were all infertile and as I'd not got around to candling them during incubation, that was a disappointing surprise.

The chick was unfortunately faulty, not sewn up properly along its belly and it never opened its eyes.  I put it out of its obvious misery as soon as I discovered the problems.