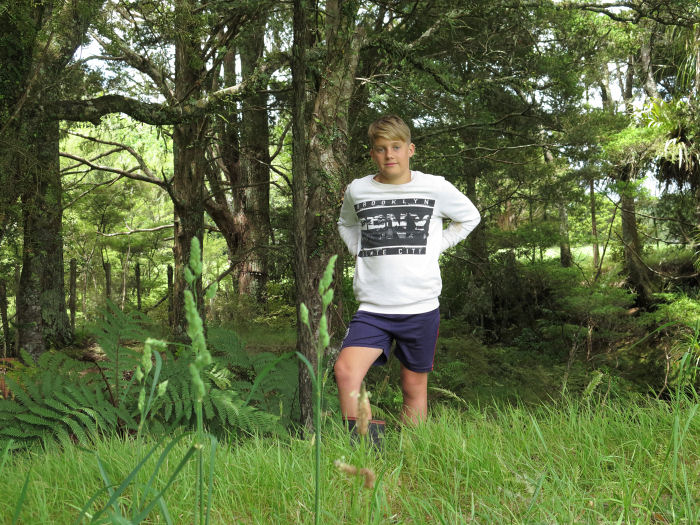 Jacob came for another night of his 'weekend on the farm' prize, for winning the Calving Date Competition this year. 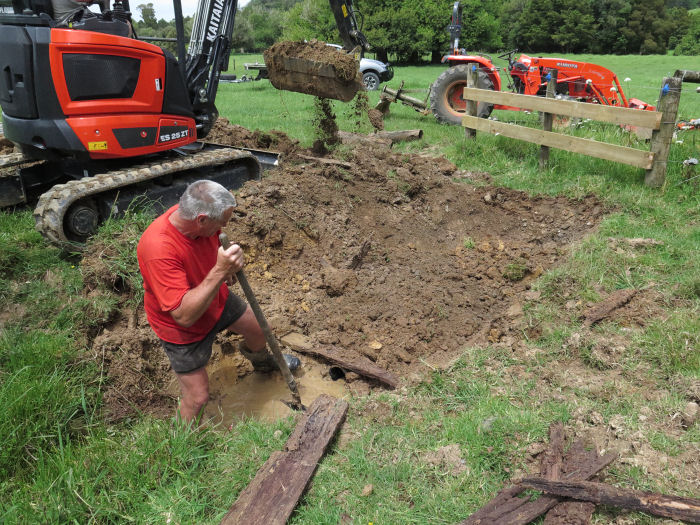 Jonny, who keeps bee hives on our place, brought the small digger he'd hired for the weekend to help replace a couple of culvert pipes, which will ensure better access to one of the places he'd like to keep the hives.

This one is in one corner of Flat 4, leading to the small rise upon which we lived when I first came to the farm, in the ugly-from-the-outside but with beautiful views, shed-house Stephan had previously built.  The area faces North so gets sunshine all day and with the Bush Hill behind, is well protected from the prevailing cold winds in winter.  The biggest problem with it at the time was access: we had no metal on any of the farm tracks, so as soon as the weather got wet, we couldn't get here except by walking, or tractor - and even that got stuck on more than one occasion.  Mostly we back-packed supplies in.  It was when living here and looking after Christina's then-two-year-old son for a week, that I resolved not to have children: he was too heavy to carry and couldn't walk far on his own and certainly not through mud!  A completely impractical being.

That building was unfinished, uninsulated, unlined, terribly draughty.  In the summer it was better than all the best bits of camping; in the winter, miserably cold.  We had a wood-stove with a wet-back to heat lots of water, running hot and cold water, a great shower; but no power.  Stephan had run a telephone cable across the flats when he built the 'house' and I was frequently tracking faults and keeping it working - remember when people all had landlines and telephones were always plugged in?  (We still have a couple of those, since electricity isn't always on when you need it.)  We listened to a lot of National Radio in the evenings, the most memorable programme being one on the night sky which told me, one night, that Venus would be visible at dawn and I continued to watch it with delight throughout the morning, a tiny, moon-like white spot, until it was no longer visible because of the brightness of the later sunshine.  On another occasion Jupiter and its moons were to be visible and I was thrilled to see them through binoculars that night.

We lived there for just over a year, through the winter and the following summer.  As the following winter approached we decided that too much cold is miserable and we started building where we now live and spent most nights of the week at Stephan's mother Muriel's warm house nearer town and I came out to the farm during the day.  Our new building had more insulation in its walls than most Northland houses.  We were determined not to be cold any more! 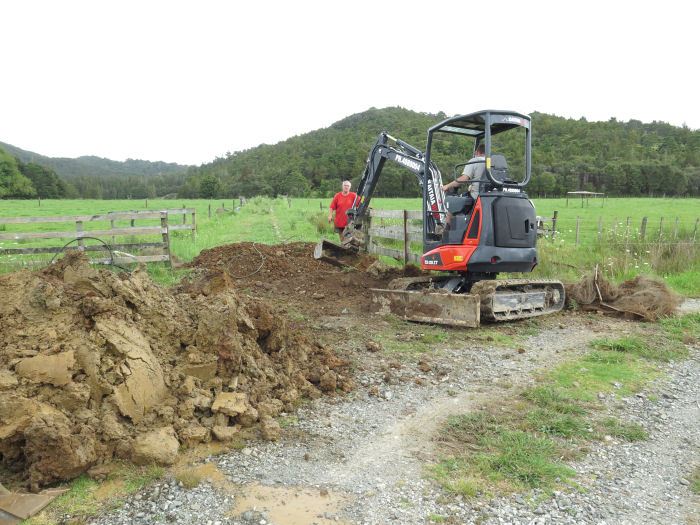 The culvert in the middle of the flats, at the start of the lane leading to Flat 4 (the old house site is just to the left of Stephan's right shoulder in this picture) has been causing problems for a while, so Jonny dug that out too, a slightly bigger job than for the other one, leaving it open for Stephan to deal with later. 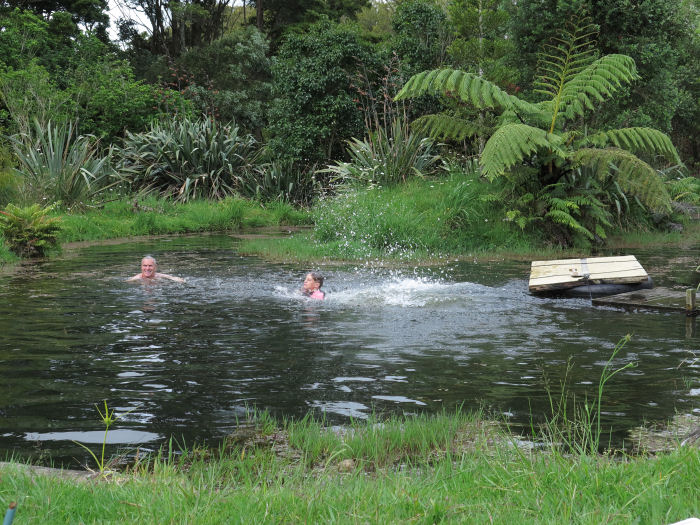 As soon as Jonny was loaded and gone, it was swimming time. 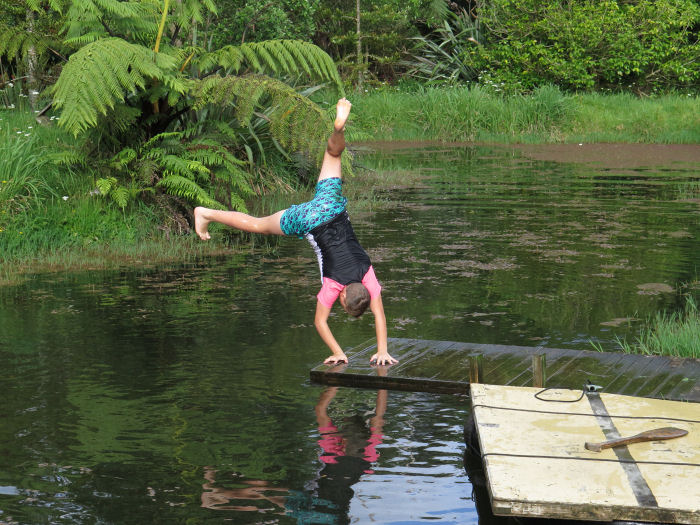 Jacob is a gymnast, so entered the pond in a number of artistic ways. 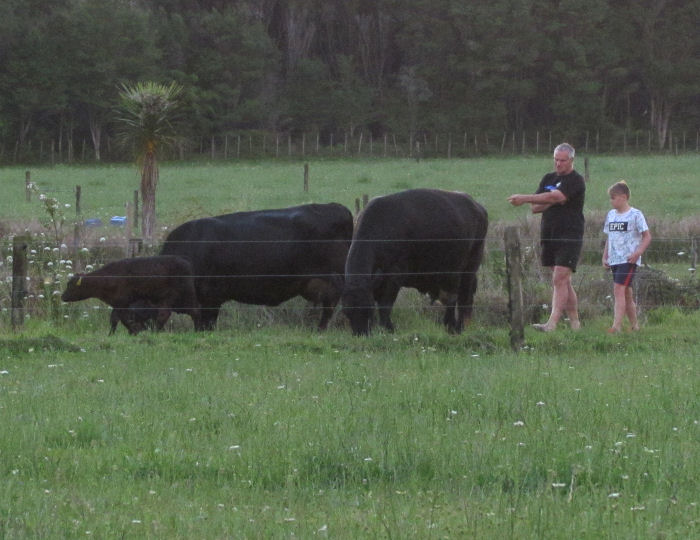 Bringing the house cows in to separate the calves from their mothers. 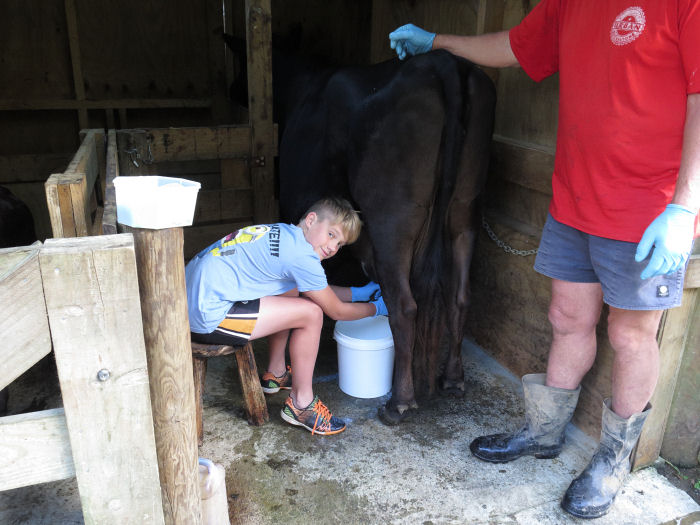 He didn't get very much but Jacob was thrilled to get some milk from Zella this morning.  She is a very accepting cow.

We should probably keep a shorter stool in the shed for people who are not as tall as Stephan. 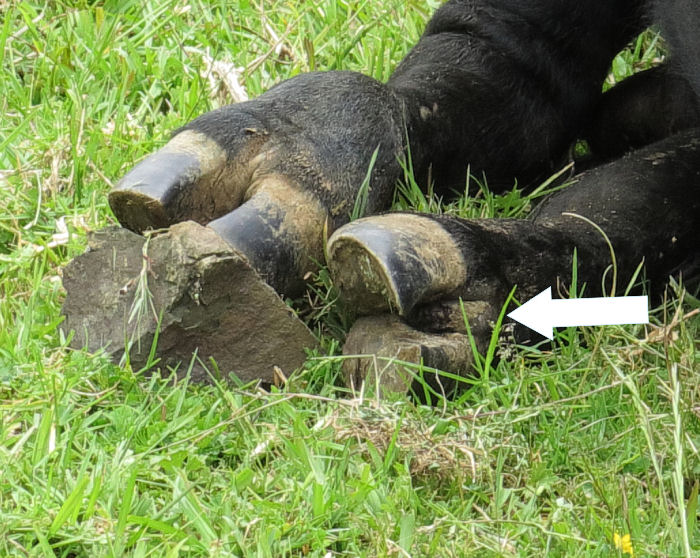 I took a few pictures of the lame bull's hind feet while he was lying down today.  There's an obvious swelling between the toes of the sore foot. 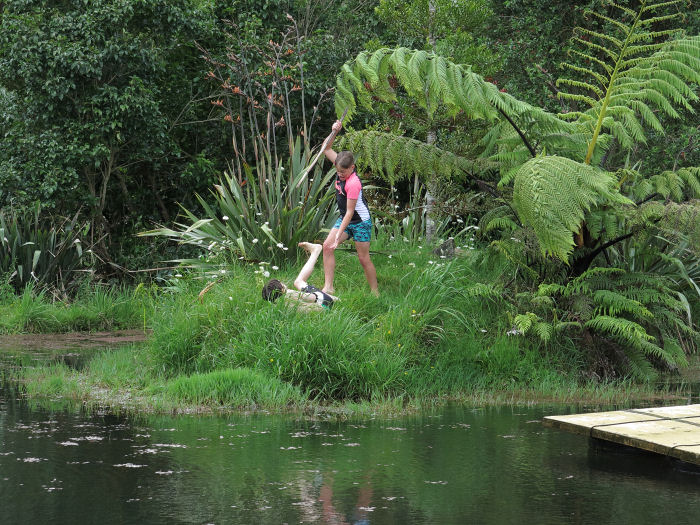 Jacob and Sean had a lot of fun in the pond, although some of it looked terribly violent: murder on the island! 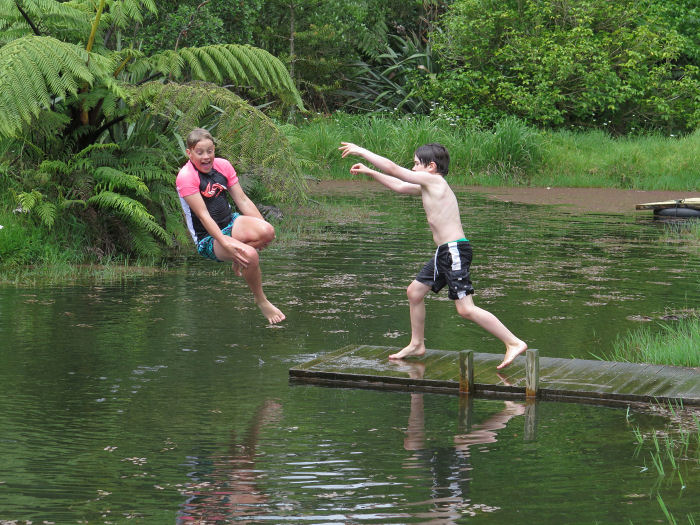 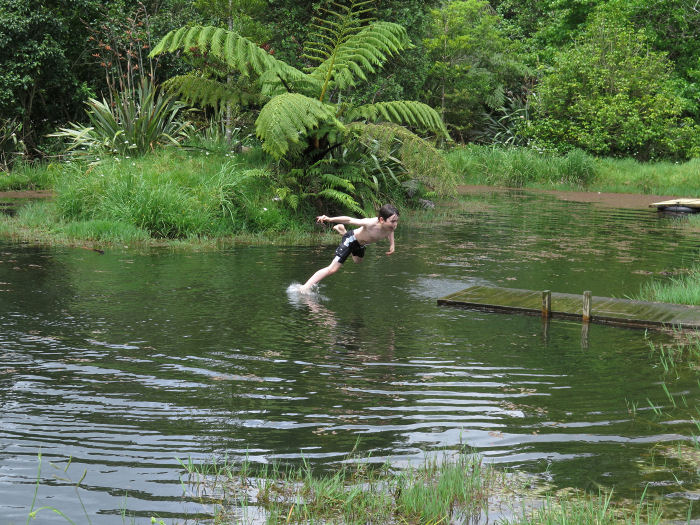 There were a lot of experimentally arty leaps off the jetty. 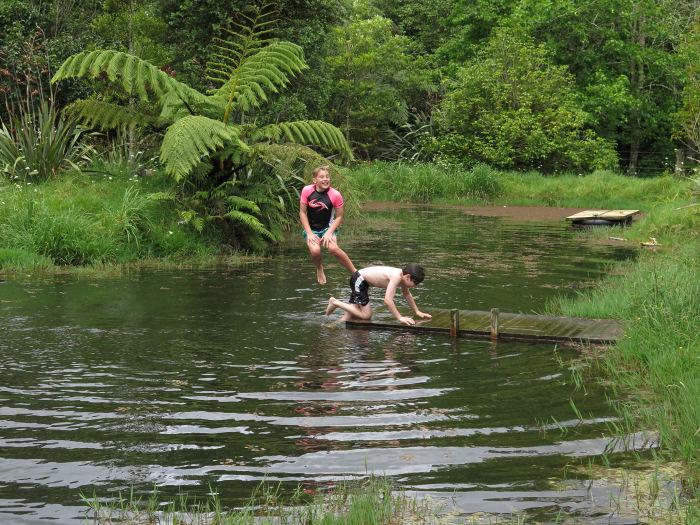 There are only three rules in this pond: 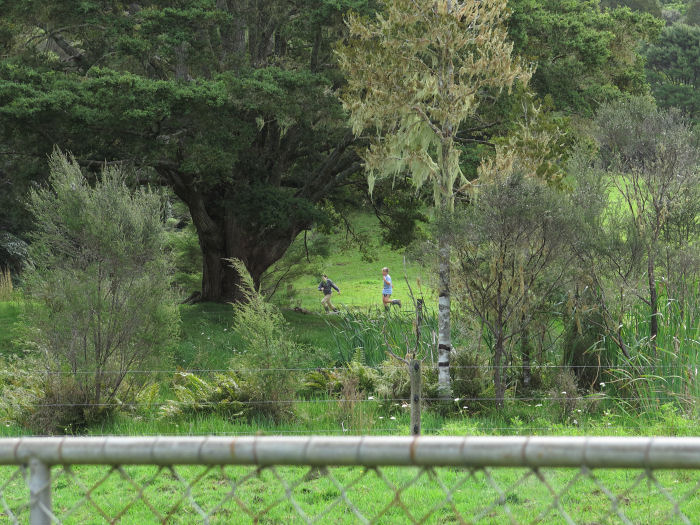 Later I took the boys with me to move the cows and calves out of the Big Back South.  Once I had all the cattle quietly near the gate, the boys headed off up the track to climb one of the big Puriri trees.

I moved the cows and calves and waited for them until they decided they'd had enough and came running back. 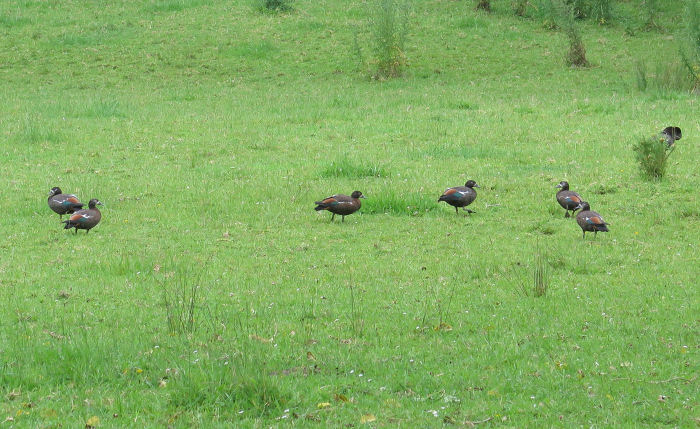 In the far Mushroom paddock there is a Putangitangi family with six female chicks - all have white feather bands above their bills, which will expand to cover their heads in lovely white feathers over the next few weeks.  Some years they breed very successfully.

Jacob went home to be ready for school tomorrow and we kept Sean overnight instead.  An earlier plan was for him to come up from Hokitika on his own and stay for several days but when his great-grandmother fell suddenly ill, he came north with both parents instead. 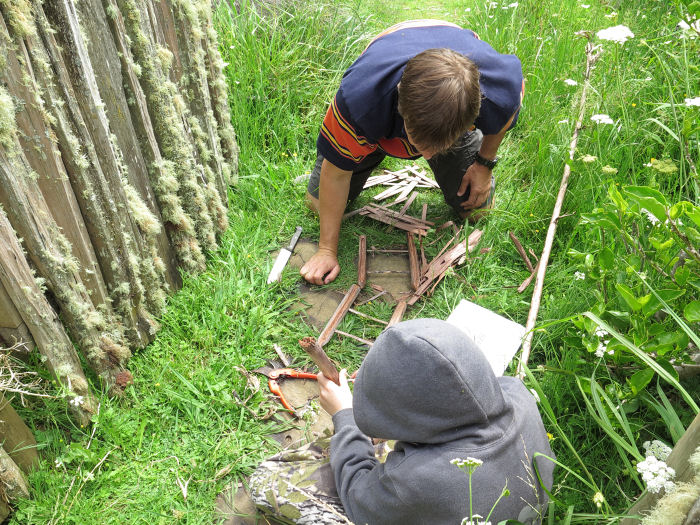 Mathew and Raewyn came out mid-morning and Mathew spent an hour or two with Sean and lots of bits of flax and Kanuka making very elaborate rafts (with sails) for the pond. 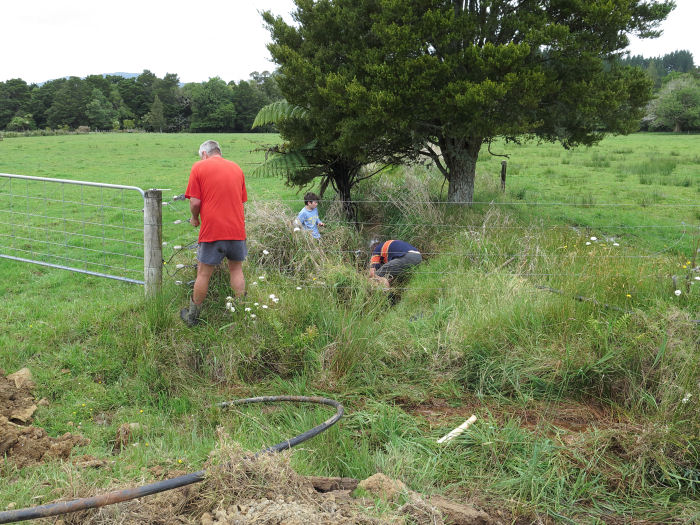 After lunch Stephan, Mathew and Sean went out to do some drainage work in our biggest drain, before the new culvert pipe goes in where Jonny dug the old one out on Saturday.  Jacob came over a bit later and I sent him off out across the flats to join them. 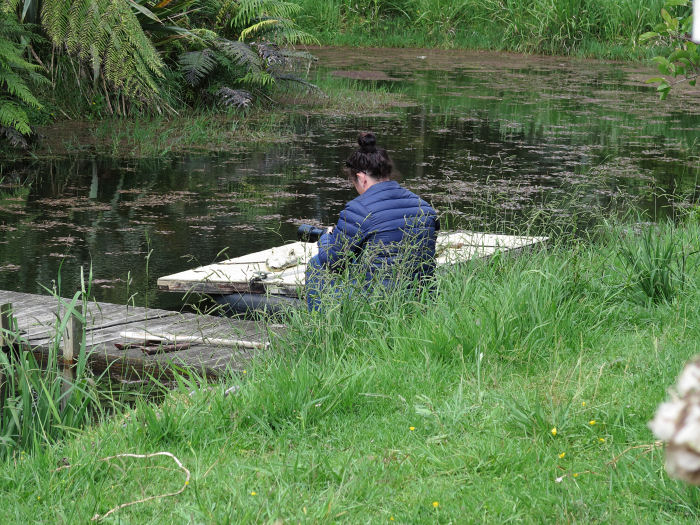 Raewyn spent some time sitting quietly by the pond, photographing the myriad creatures living in and around the edges. 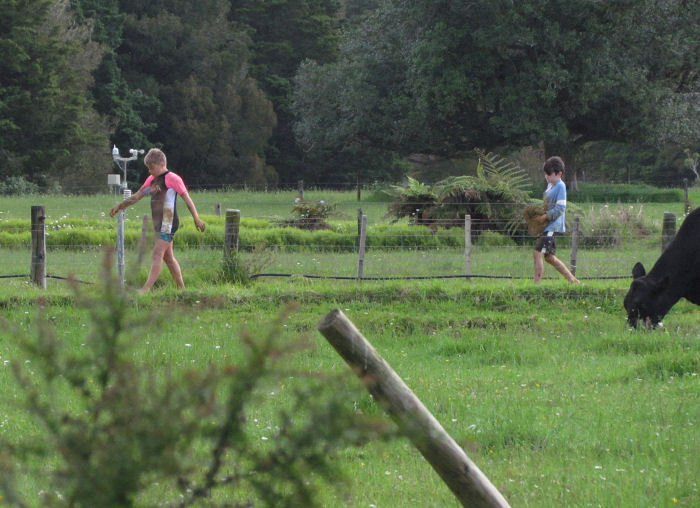 Later I spotted these two, on their way back, stopping frequently to rest, carrying ... 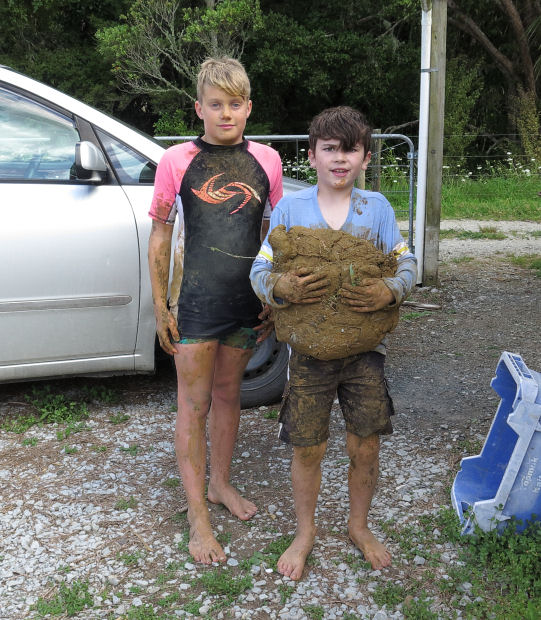 Sean had reportedly been forming this huge lump from clay dug out of the drain and was determined to bring it back to the house.  Why?  I don't know; he's a child. 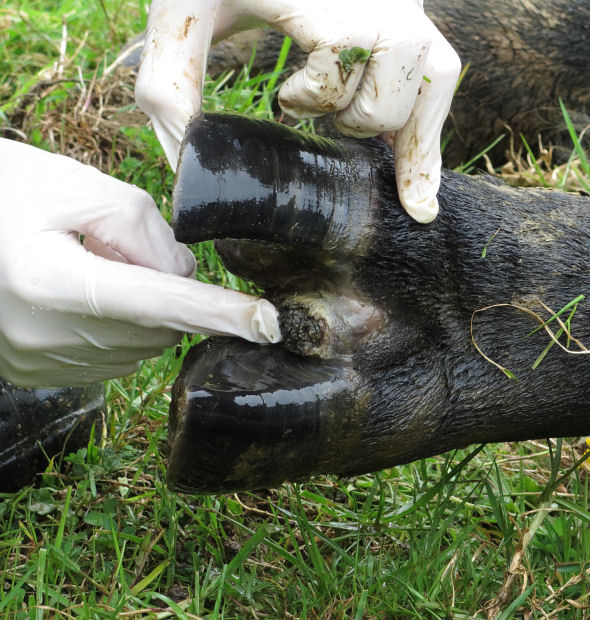 Yesterday we phoned the vet to discuss what we could do about the bull's foot.  We had both concluded that it would be foolhardy to try and head-bail the bull and lift his foot: he'd likely break things and possibly injure either or both of us.

Today Nathan and his new Large Animal Technician, Rachel, who is very tall and confidence-inspiring, came out.  After injecting the bull with some sedative so that he quietly lay down on the ground asleep, Rachel sat on his head - not quite, but shielding his eye from the bright sunlight, crouched so that if he moved, she'd be able to warn Nathan - while the bull's foot was examined.

I had imagined we'd find something had pierced the skin between the toes, could be removed and the foot would recover but no, not that simple.  Nathan said it looked rather like Bovine Digital Dermatitis.  It could be removed but bearing in mind the ground conditions, recovery would be difficult to manage.  A more realistic treatment would be to "cut it off at the neck", i.e. send the bull to the works, where samples could be taken and tested to confirm the diagnosis.

Nathan gave the bull a 'wake up' injection and then we all got ready to move quickly out of the way if necessary.  The bull did look quite startled when he suddenly realised there were so many people in close proximity and he's not the quietest of my animals.  But he got up without bumbling into anything and gradually became more stable on his feet again and we let him join the other bulls and spend some quiet time grazing near the yards before they went back out across the farm. 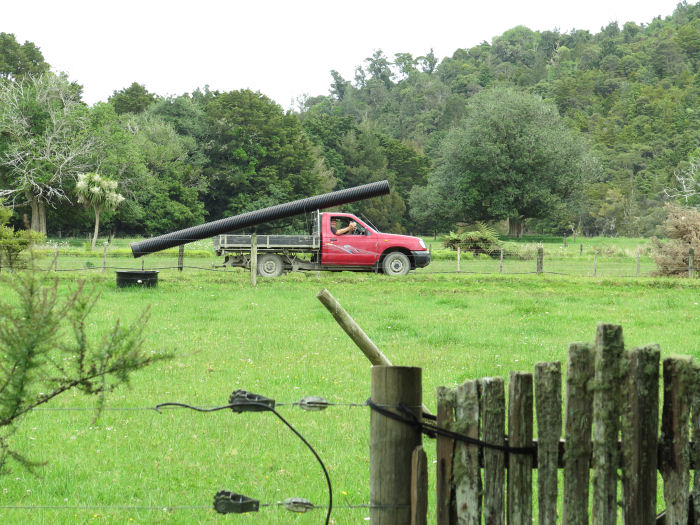 Stephan, on his way out with the new culvert pipe for the lane. 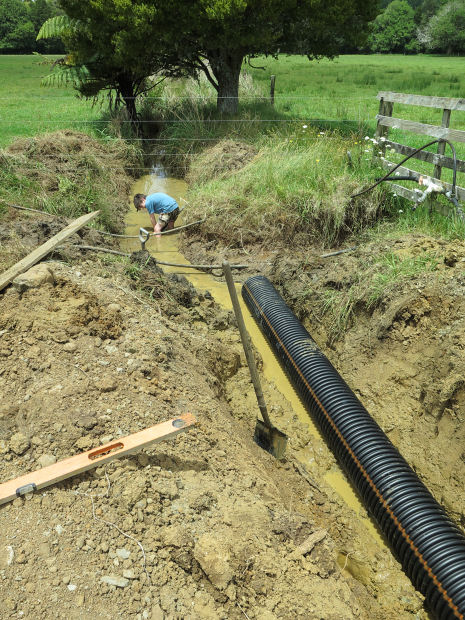 More excellent opportunity for Sean to play in the mud and water!

Once the pipe was correctly in place, Stephan filled it all in, ready for me to bring a mob of cows and calves over it a little later in the day.  It will take some time for the surface of the road to be completely stable and smooth again, as the soil settles back into the hole - and fresh soil is always irresistible to cows, who excitedly dig great holes in it by pawing at it with their front feet. 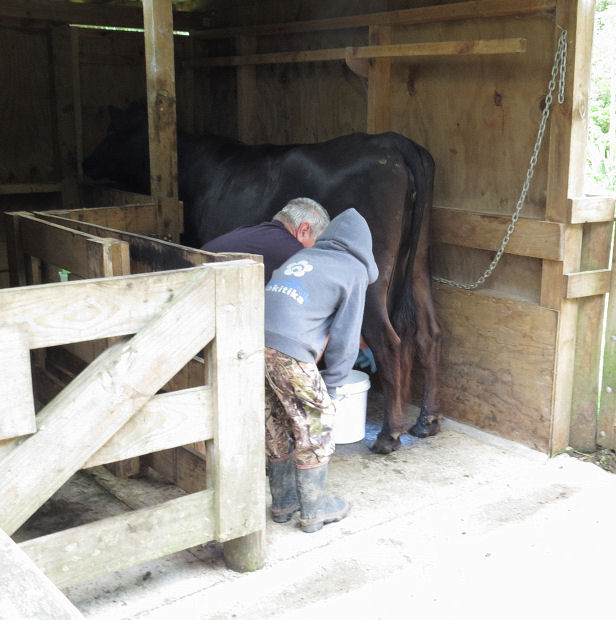 Sean taking a close interest in milking this morning.  He didn't want to try it himself.  Maybe next year when he's a bit bigger? 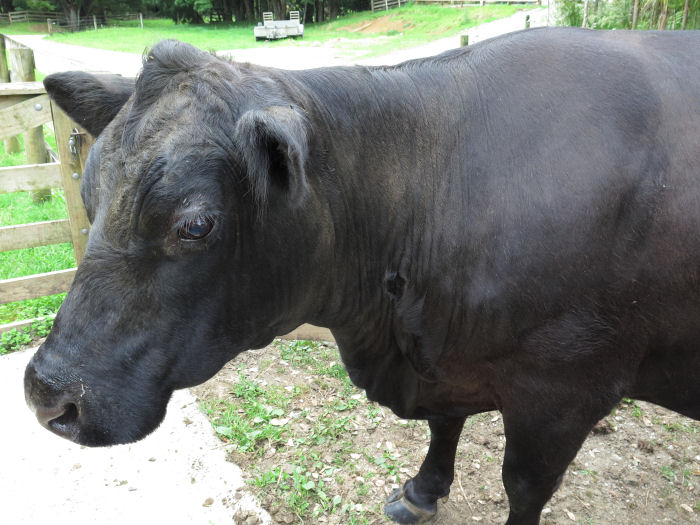 Imagen, almost-patiently waiting for her calf to be let out for his morning feed.

While Stephan and I went off to the funeral of a lovely woman in town, Mathew and eldest son Dylan went hunting through the bush for weed trees.  It's so good to have help with that task from time to time.  It's more than we can handle or ordinarily have time for on a regular basis.

The funeral was appalling.  Most funerals I attend these days have some element of at least commemoration, if not celebration, of the life of the deceased.  Not for Lois: her husband was the primary speaker, told us that Lois had lived for this day when she would ascend to heaven, that everything she had ever done was only for today.  The names and life stories of the men who had brought her to her faith were mentioned as much as hers.  We almost left part-way through, except it would have looked very rude.  I remember Lois as an incredibly warm woman, with whom I attended the pottery group years ago and thereafter occasionally met in town.  She was gorgeous, with the loveliest smile.  All her husband had to say about that was that she had been a beauty when he married her (there was a photo on the service sheet) and while her physical beauty had obviously faded, her spiritual beauty had grown.  What a pig!  She was my age and she was gorgeous.  Pah!

I had no idea Lois was part of any sort of odd religious sect, so while her husband said she spent most of every night up praying for us all, I concluded she got out of bed because she didn't like him.  I hope she comes back and haunts him, scarily. 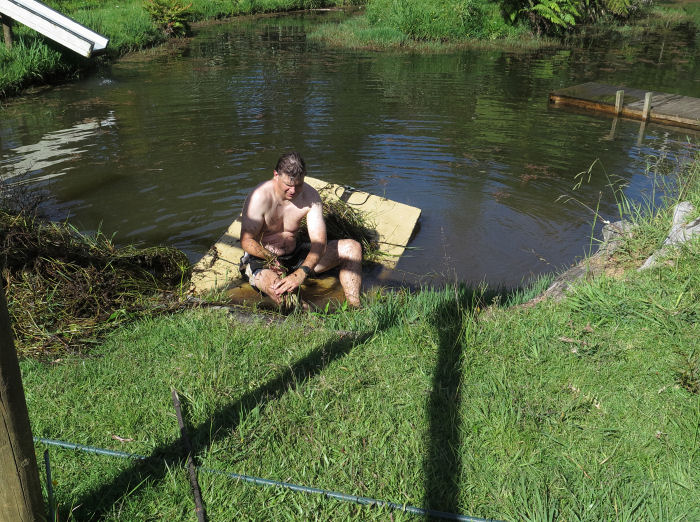 We came home and spent the rest of the season's first lovely warm, sunny afternoon by the pond.

Mathew sat happily on the raft and weeded the edges of the pond for ages. 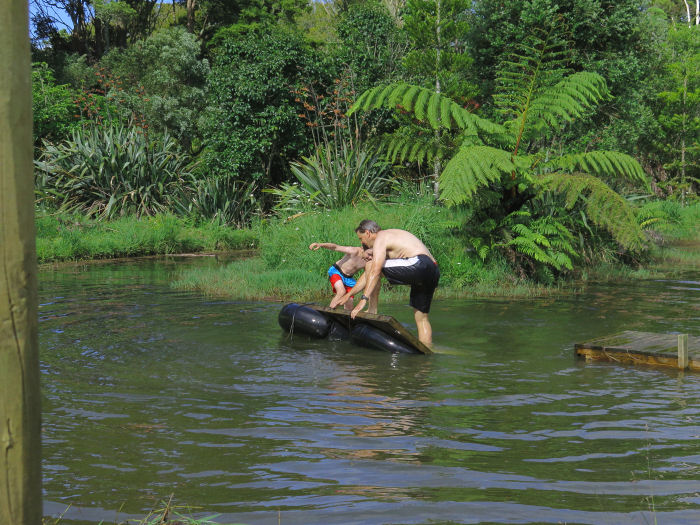 The weed raft usually gets used in swimming fun, often the location of wild balance challenges: who can throw their opponent off the raft first?  Once it goes over though, everyone ends up in the water. 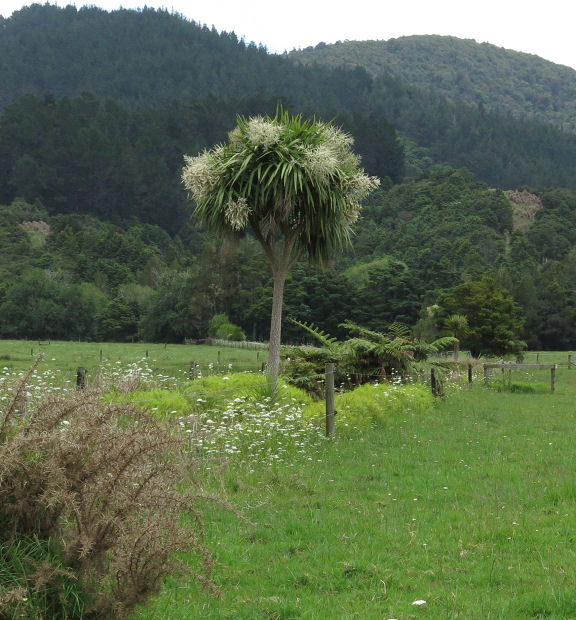 The beautiful Cabbage Tree in the drain along the edge of Flat 1. 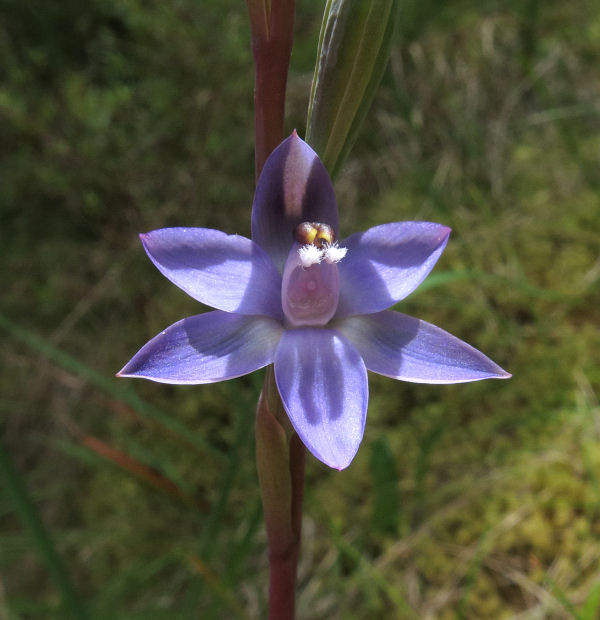 And a Sun Orchid flowering in the long-awaited warmth.  Apart from two days last week, daytime temperatures have so far remained under 20°.  Yesterday was 19 and today's high, 20°C. 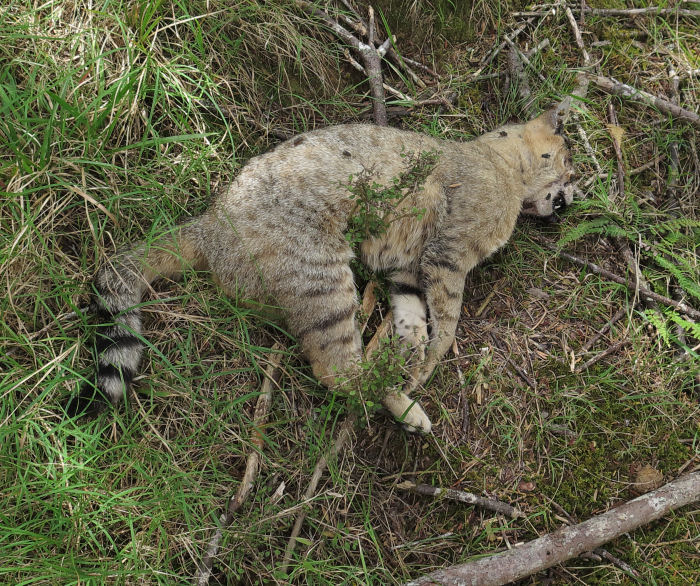 I thought I'd taken a photo and mentioned this cat some time ago when it was sitting up on the PW hillside one day, but cannot find that reference.  It is one of many feral cats (in this one's case previously) resident in the PW and around the back of the farm.  They're hard to catch but every now and then one will have a close look inside one of the live-capture traps and be caught.  And then humanely shot. 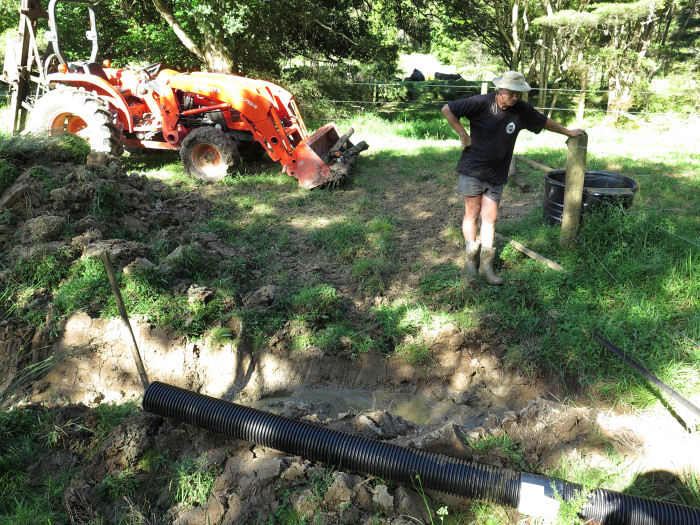 Stephan and the second culvert pipe newly installed in the Blackberry paddock.  The other is up near the gate at the other end, providing a dry passage across the other end of the drain.

It's satisfying getting some infrastructural upgrades done.