For a few weeks in 2016, I got terribly behind with the news, deciding in the end to abandon these pages until I had time to write them later.  That time never arrived.  Then 2017 eventually required its "this time last year" links, prompting action. 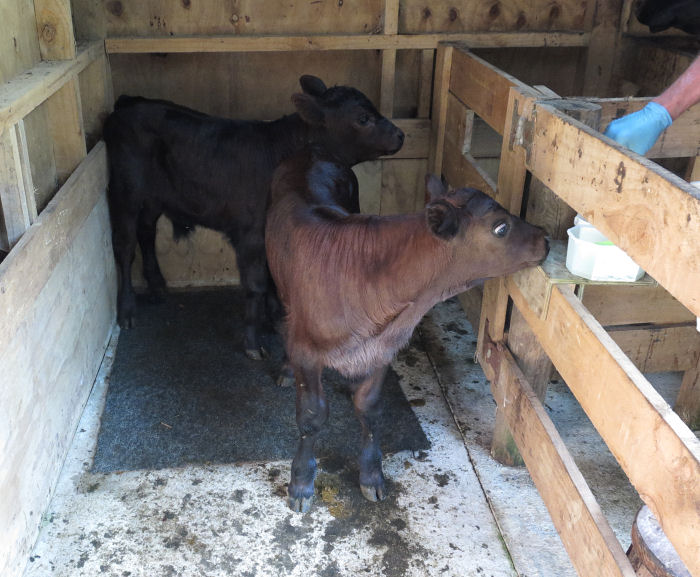 The two house-cow calves, penned for the first time this evening.  Zella's calf has already begun taking more of her milk than will be good for him, leaving us with very little for the house at the morning milking, so it is time to restrict his access.  Imagen's calf gets separated too, so neither is left alone.  Both will grow better than anyone else in the herd, despite this treatment. 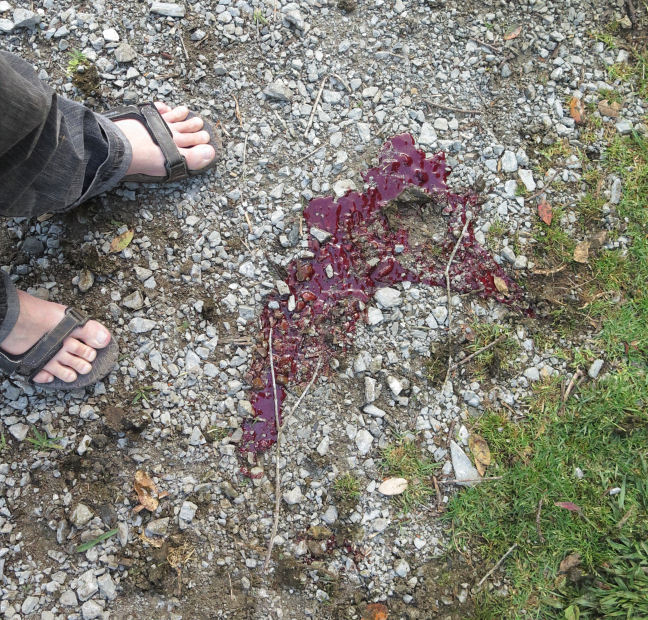 What a lot of blood!  Cows leak bloody discharge for up to a couple of weeks after calving, so this is entirely normal.  I always check that it has no smell, to ensure there's no infection involved.  Infection is very rare.

Zella's calf had bumped his jaw on a rail or something by this morning, loosening one of his central teeth.  There wasn't anything we could do to make that right, so have to hope it won't affect him too much.  Where he will go to live after weaning always has good amounts of feed, so I expect he'll be just fine. 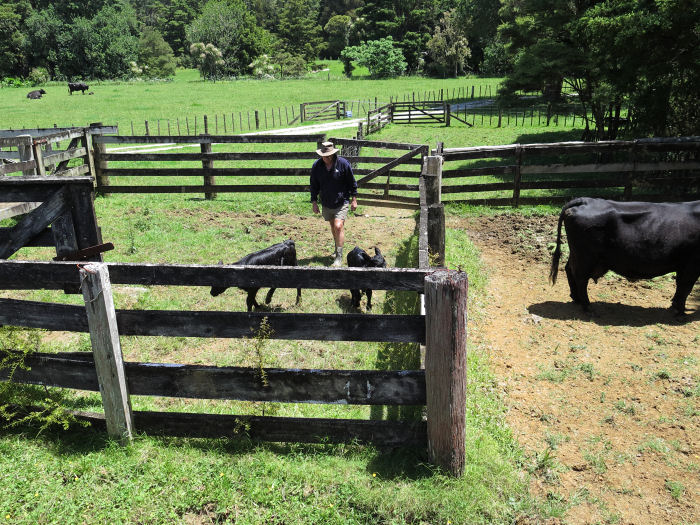 We weighed and tagged the house-cow calves then brought Demelza and 750, the late calvers, in for their calves' first trip over the scales. 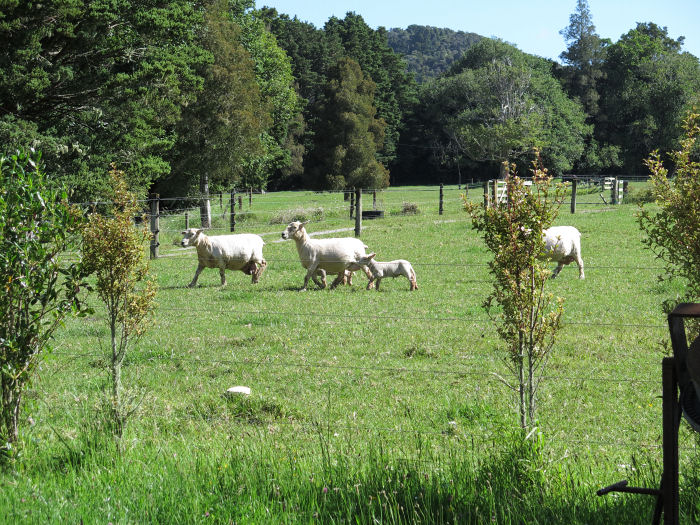 Then it was sheep-management time.  I had to apply only three rings this season, two to tails, one to the ram lamb's scrotum. 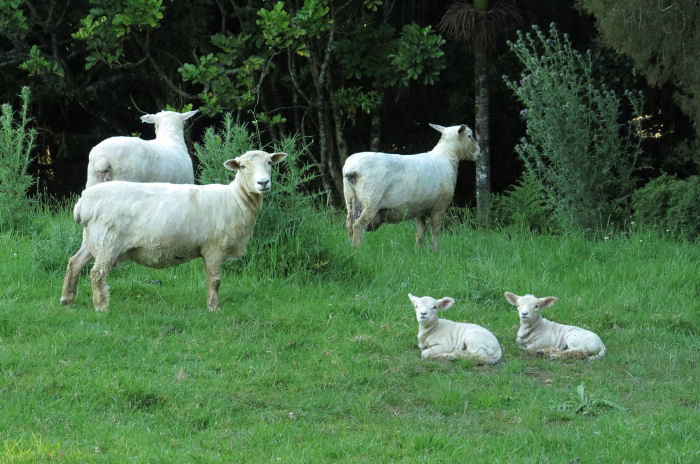 When I checked them in the evening they were sitting reasonably comfortably.

The application of the tight, rubber rings is obviously a very painful procedure.  Ruminants usually hide pain for survival, so it's hard to know how awful it is for them.  The pain presumably subsides but the males in particular are sometimes still obviously uncomfortable for a couple of days afterwards.  In many, you could barely tell there'd been any interference at all.  It's a fraught area, this animal management using painful procedures.  At present there is no legal requirement for pain relief if done before specific age limits but that's primarily because of the practical and financial constraints of farming systems, rather than the comfort of the animals.  Our whole society needs to be more informed about these issues.  If you eat meat or dairy products, you should know and think about the lives of the animals concerned in the production of those foods. 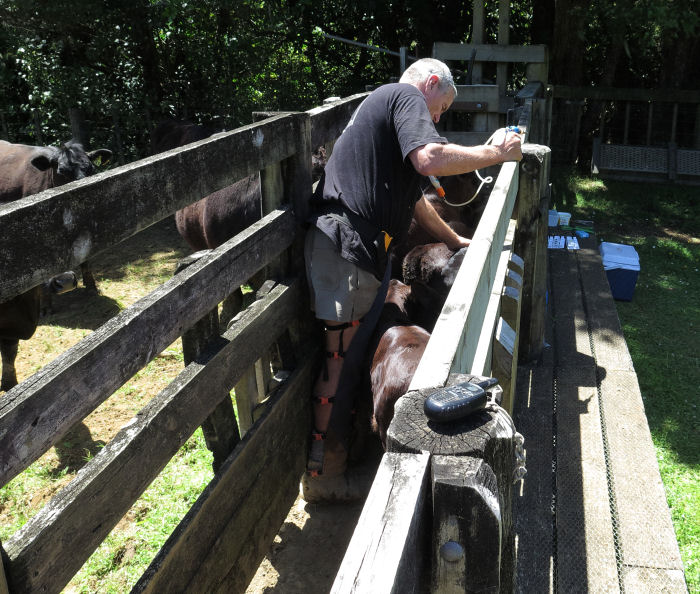 Vaccination day, the first 7in1 vaccine for those calves older than four weeks.  We shove them all up the race, vaccinate them, then bring them back in pairs (so they stand reasonably still next to each other at the top end of the race) to have their NAIT tags inserted in their right ears.

We also took blood samples from cows and heifers who'd been grazing along the fenceline where the trespassing neighbour's heifer had spent her winter.  They need to be checked for BVD. 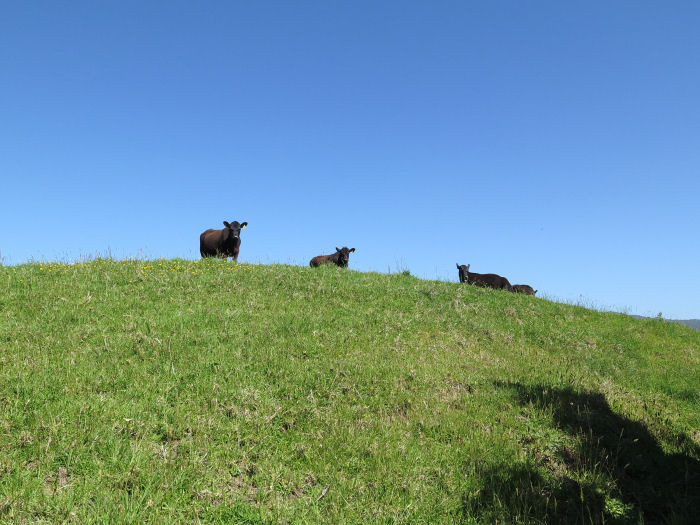 Stephan went off to town with the vials of blood, to go away to a lab by courier and I went Over the Road to look at the young cattle.  What a beautiful day! 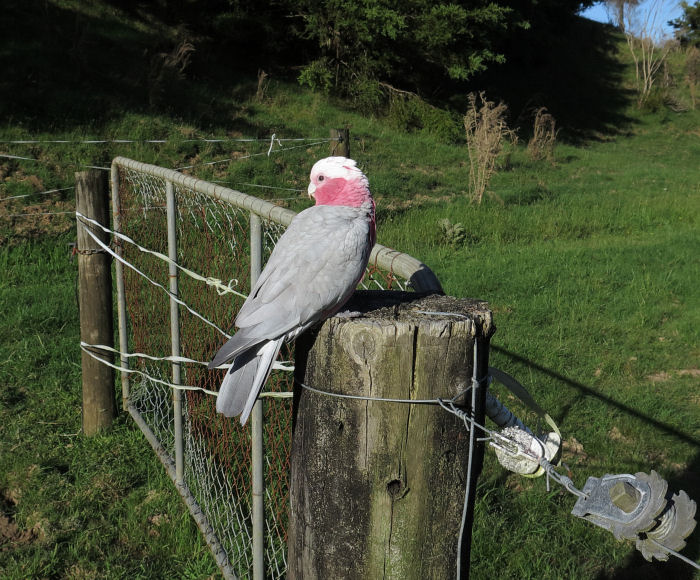 We drove most of the way out the back to open some gates for the bulls, taking Floss for a bit of "environmental enrichment".  She likes outings. 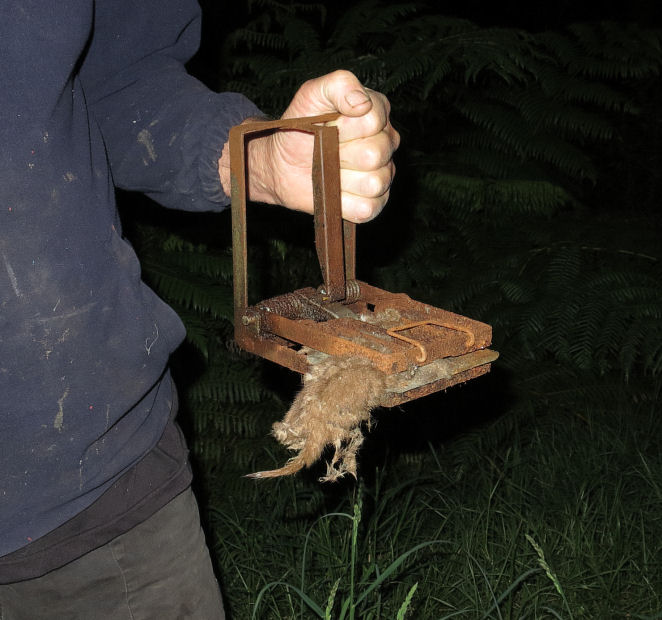 The dried up remains of a weasel - a stoat would have a black tip to the tail.  We don't see weasels as often as we see stoats, but I have no doubt there are a great number around, so it's always satisfying to take another one out of the population. 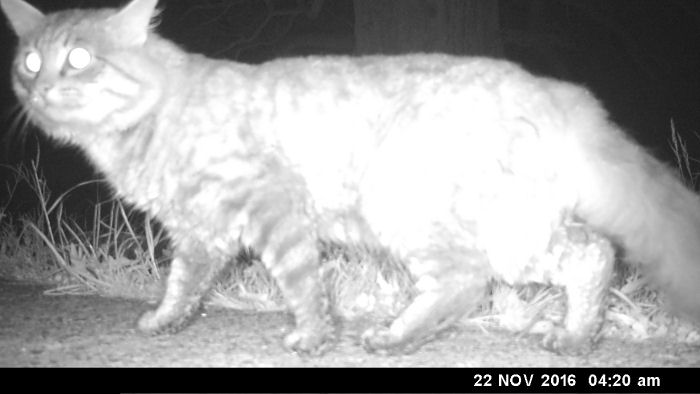 And then there are cats.  We'd never seen this cat until it appeared on the trail camera card early this morning.  Stephan often has conversations with people who leave their pest traps unset because they think there are no target animals around; we leave them set all the time because most of the time you don't even know they're there.

This sighting did prompt Stephan to bait the traps with fresh meat but we didn't catch this one for a while and then it was in a trap in a neighbour's garden. 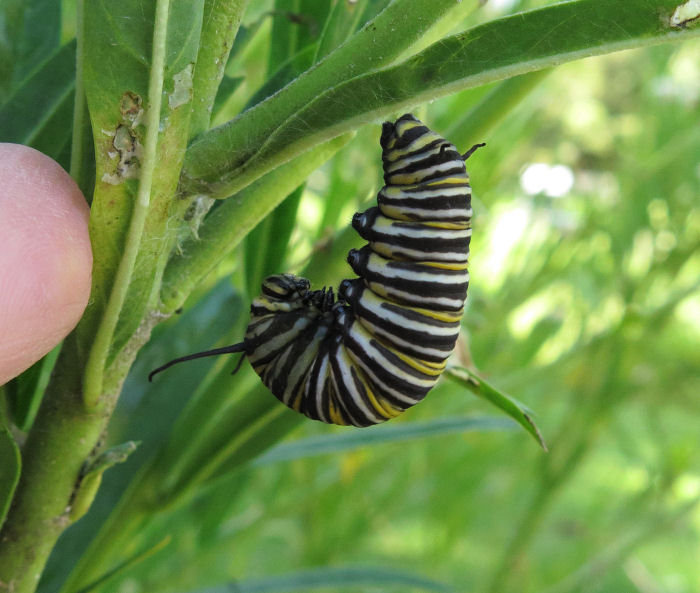 There's been some Monarch Butterfly activity, caterpillars quietly munching on the Swan plants and making it to sufficient size to pupate.  There are few wasps around at present, so the caterpillars have a chance to survive. 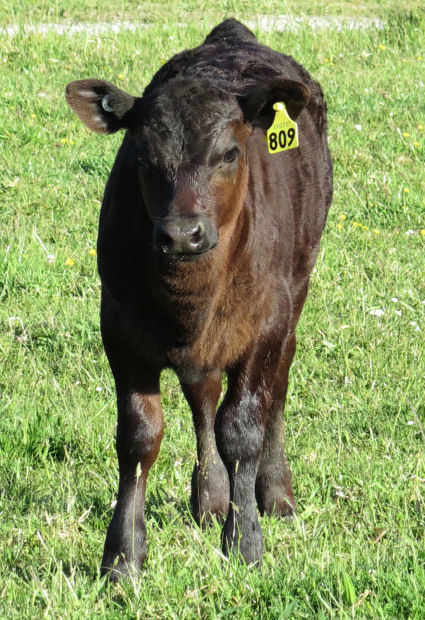 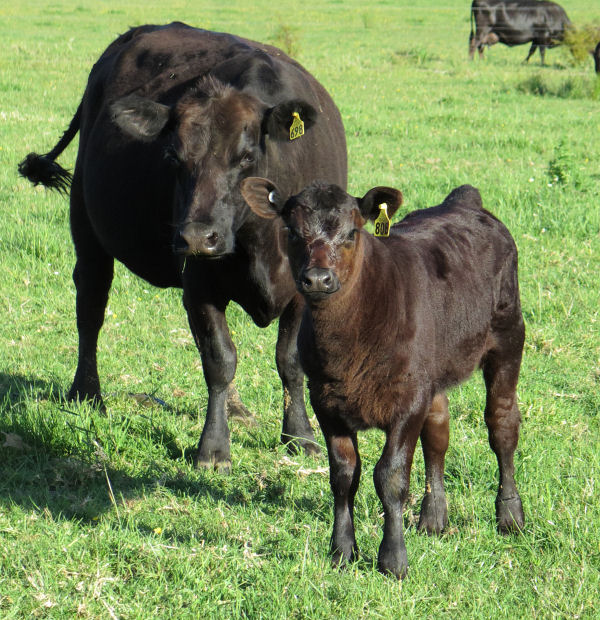 ... and Gem 698's.  They look quite similar around their eyes.  They're genetic full sisters, having the same sire and identical twin mothers.

Neither is a quiet animal, so they won't be staying beyond weaning.  All their siblings have been difficult too.  While I really like the idea of having the twins, the reality of their tricky temperament and its heritability is wearying. 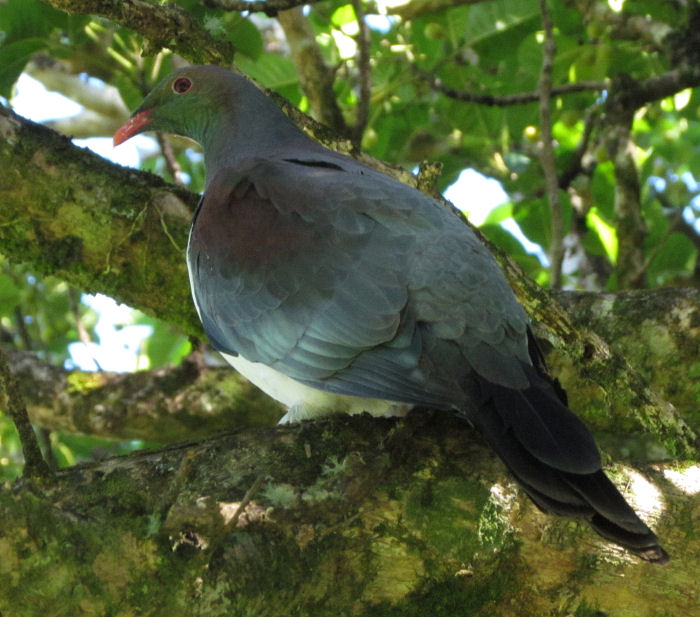 A beautiful Kukupa in the Puriri tree outside the house.  It gives me great pleasure to be able to get so close to them as they go about their ordinary lives. 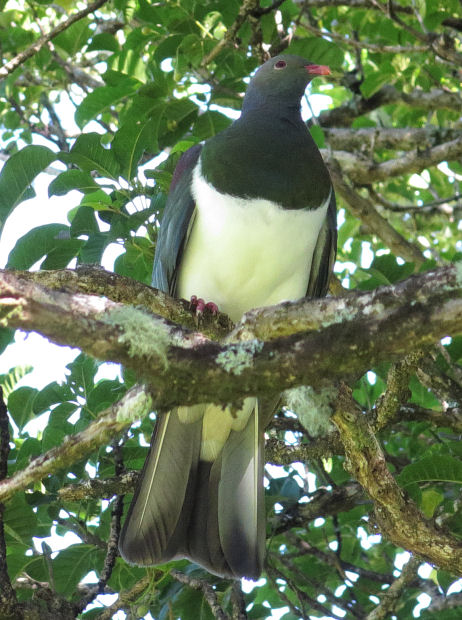 Another beautiful Kukupa, further out along the tree branch. 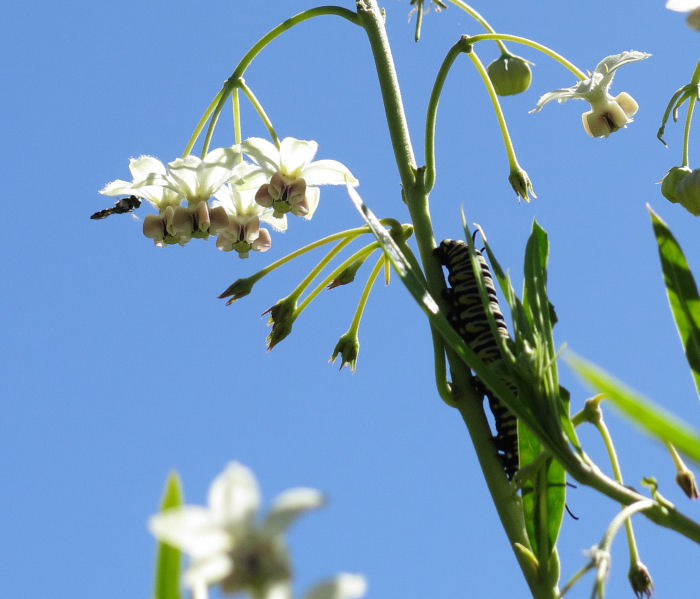 The Swan plants are flowering profusely as the caterpillars chomp their way through their leaves. 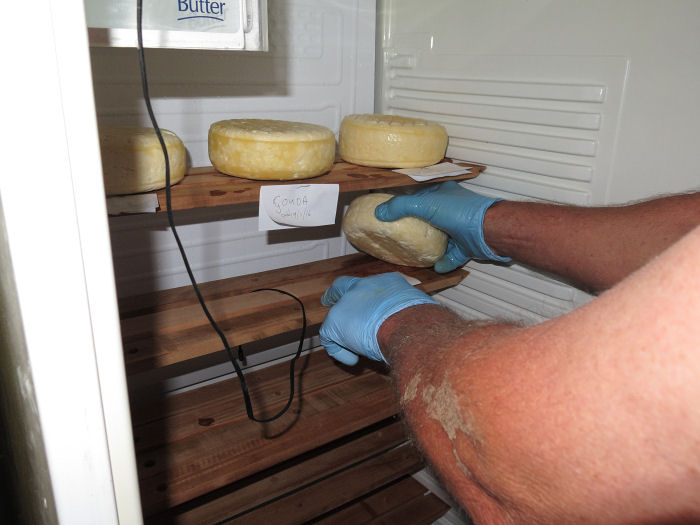 Stephan has been making cheeses again.  He found some very useful untreated wood to cut to just the right size to use as slatted shelves in the fridge, better than the solid plastic ones. 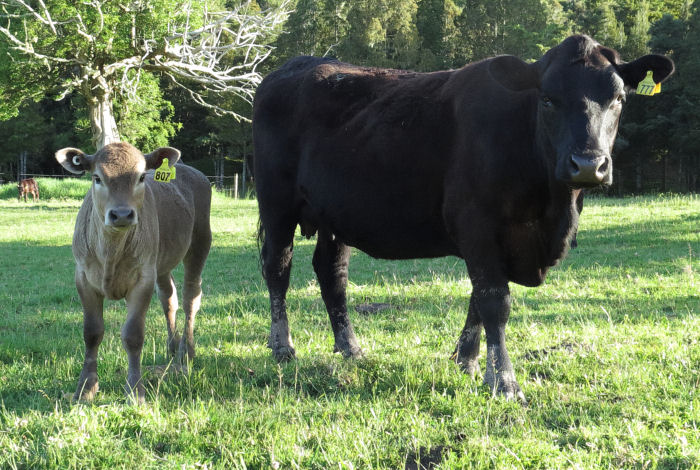 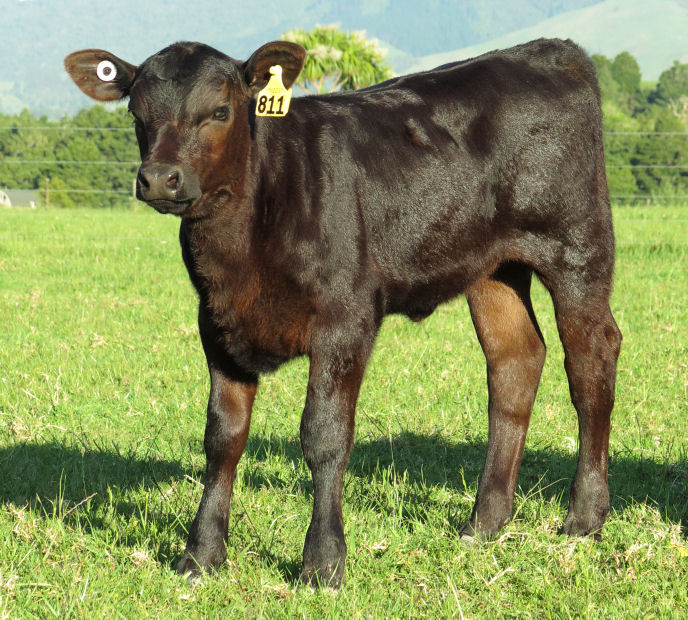 She seemed a tiny, thin little thing when she was born and has steadily grown smoother and bigger every day since. 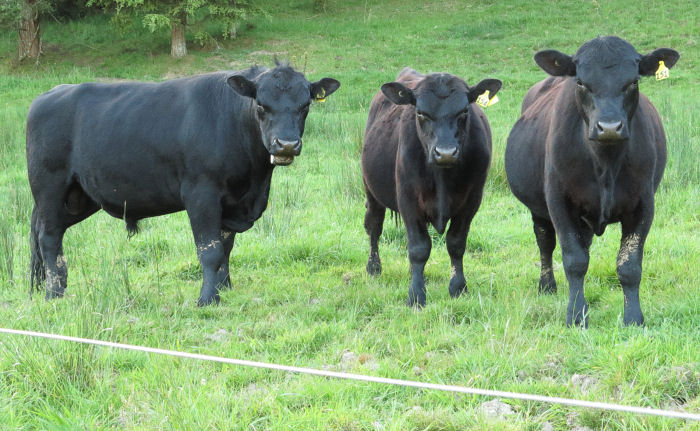 The following day I noted that 138, at left, was lame in his left hind leg - and in this picture it does appear that he may be holding it up a bit.  The lameness wasn't apparent all the time so difficult to work out what might be causing the problem.

Today we went to a wedding!  Stephan's cousin Christina and Dan rather casually announced their plans a couple of weeks ago and appeared to want to keep it so low-key that we had to insist that of course we'd be there.  Ten-year-old daughter Emma, is thrilled. 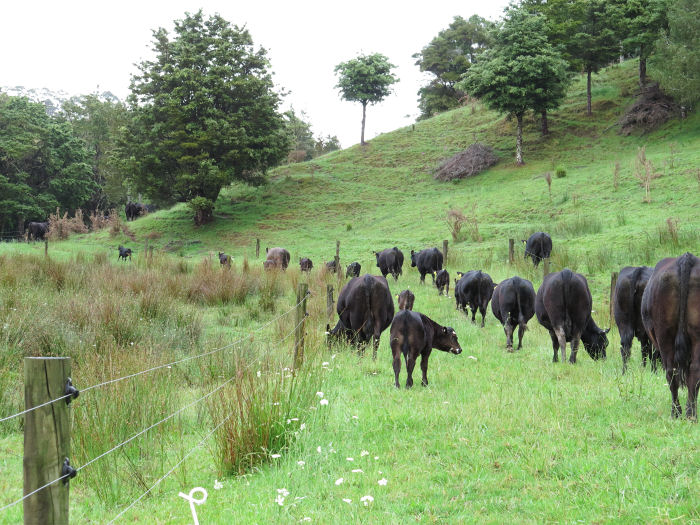 The bulls, in the Small Hill to the right of the cows in the lane, followed them all the way along on their way to the Big Back paddock.  Bulls are always very interested in cows!

An email arrived this afternoon with the results of the BVD blood tests: all clear, no exposure.  Thank goodness for that!

If there had been any infection, we'd then have had to test the rest of the adults to find out which animals had been infected (I'd selected only a proportion of each mob, including any whose calves have had problems of any kind), then test the calves of the infected animals with a more expensive test, looking not just for antibodies to infection but for evidence of the virus itself.  If calves are infected before they're born, they can be born as Persistently Infected individuals, shedding the virus for as long as they live.  Such animals occasionally live healthy lives but most are sickly and many die.  In this herd, we would have wanted to eliminate any such animals, to prevent further spread of the disease.  It would have been a nightmare.

This has been worrying me for months.  It does not worry the owner of the trespassing heifer in the least and I doubt she will ever reimburse me the cost of the tests.