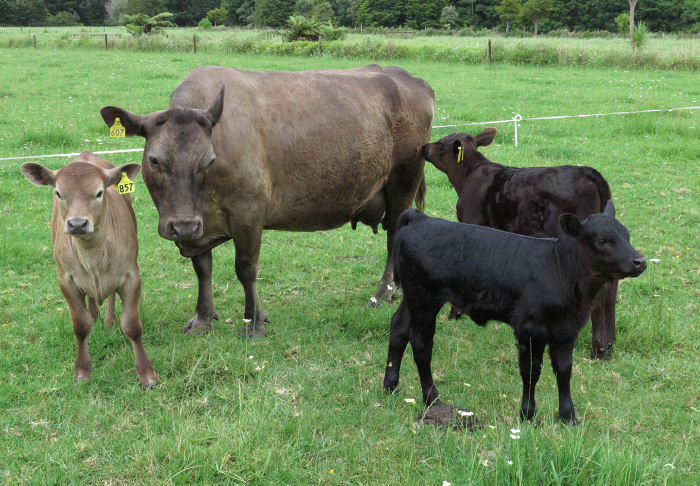 743's daughter is now 17 days old and looking good.  With her mother's excessive milk production, she's growing like a weed, with a lovely soft covering of fat under her black coat.  It would be nice if she were a bit calmer but maybe she'll settle down as she ages.

Queenly's daughter is still looking undernourished.  It's difficult to do much about this without a lot of messing around.  I could have put 149 in with the house cows and wrestled her calf into accepting a bottle each day to supplement her obvious need, but with both of us nursing our cow-related injuries, it seemed wiser to let nature take its own course.  I intend keeping neither the calf nor the cow beyond this season and both will likely come right in time as Queenly recovers and produces more milk. 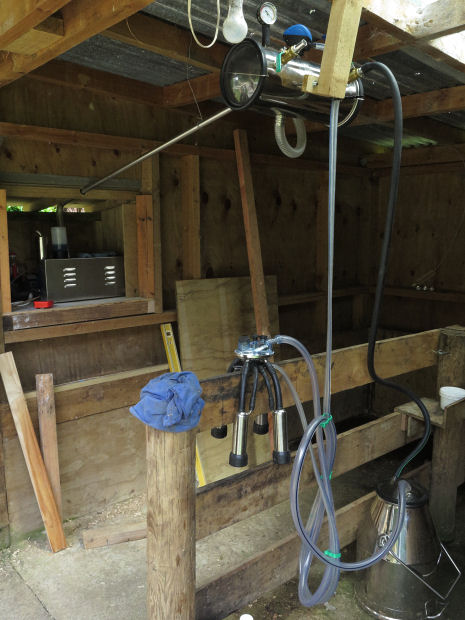 The milking machine is set up to go but now the vacuum gauge has malfunctioned, so we're waiting for a replacement to arrive.

The cupboard in which the machine sits will have a well-insulated door, to cut as much noise as possible. 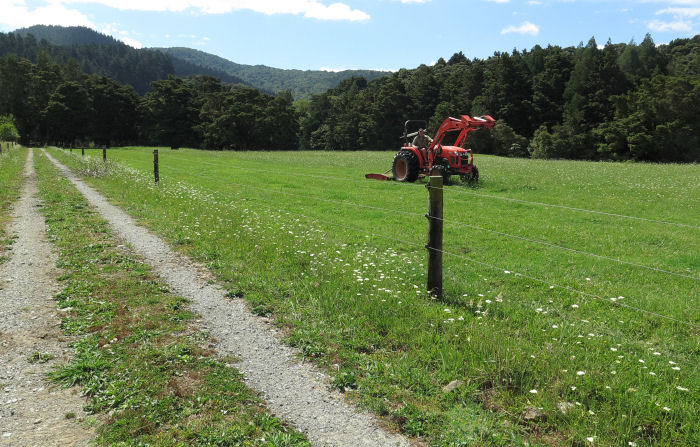 After fixing the displaced post at the entrance to the Camp paddock, Stephan mowed the House paddock, then moved on into the Windmill.  The Parsley Dropwort flowers are not very big yet but I don't want them to be either and mowing now will prepare the paddock nicely for mating time, when I need good grazing for the insemination mob. 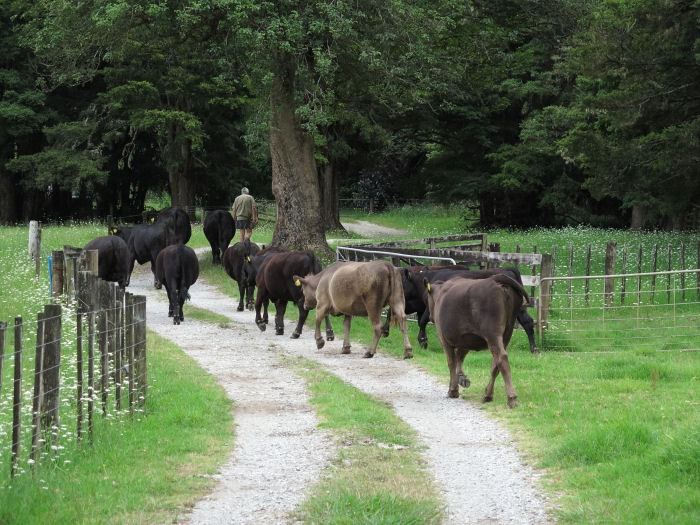 The young mob, down from the hill Over the Road.  They're all looking pretty good but I probably should have drenched them by now, to support their ongoing growth and ensure the heifers all reach mating weight by the end of the month. 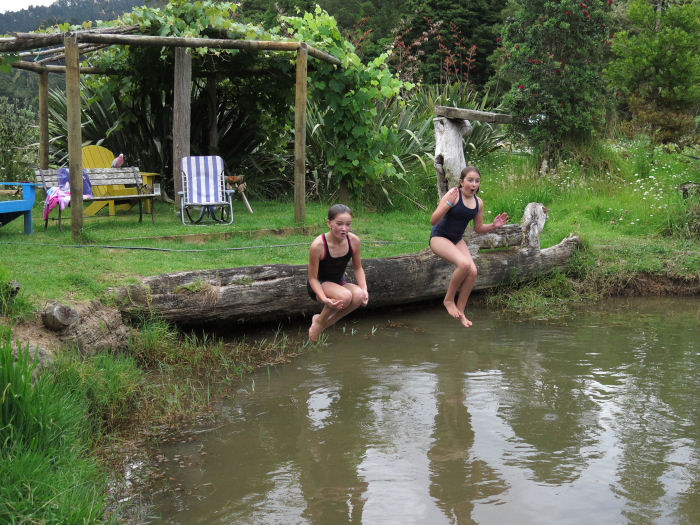 Christina brought Emma and best friend Charlotte out for swimming and dinner.  The girls always have a wonderful time in the pond. 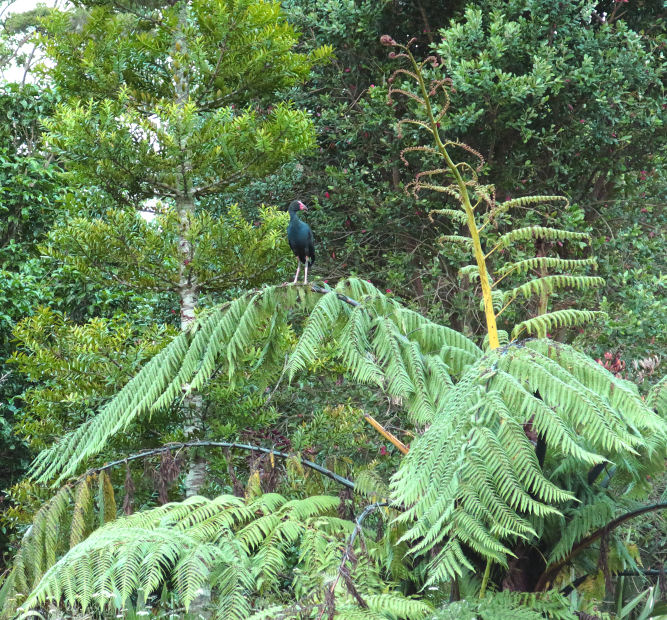 A Pukeko in a Ponga tree: the local equivalent of a Partridge in a Pear tree.

The Ponga fronds are looking a bit worn as a result of the Pukeko family selecting this fern as their night perch.

I think they are still nesting here on the island in the pond.

We got a bit more lime on this morning, before the wind got up too much to continue - could still have spread it but it would mostly have blown away! 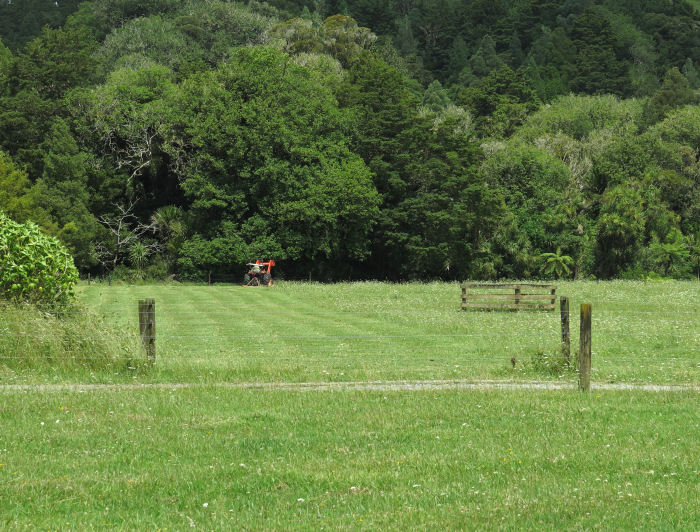 Stephan mowed Flat 1 in the afternoon, making it look much smoother than it really is, where it was wet and got horribly pugged. 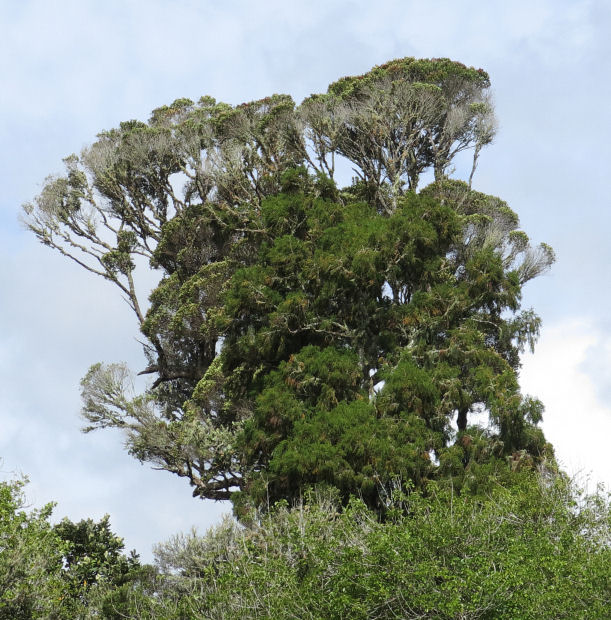 The big Northern Rata at the bottom of the flats, with a mature Rimu on this side.  The Rata has a few red flowers, I noticed a couple of days ago and I hoped that was the beginning of a more brilliant show, but it seems not.

Around the pond this year, I've noticed a lot of dragon flies.  In previous years there have been a few but most of the flying, egg-laying creatures have been the smaller Damsel flies.  This season there are many dragon flies and it is the first time I've seen them mating and laying eggs in the pond.  They are perhaps a bit more secretive than the smaller insects and it is only when they're present in greater numbers that a wider range of behaviours can be seen.

Tomorrow I have a Veterinary Council meeting in Auckland and this is the first occasion on which I could have made a day trip, rather than one involving a couple of night away.  Unfortunately it's also the one day Barrier Air isn't flying out of or into Kaitaia, having to send their plane off for maintenance.

As a result, they programmed an extra evening flight to get the plane back to Auckland tonight, so I booked on that, it still being more convenient to fly out of Kaitaia than Kerikeri.  But the flight was delayed by an hour and a half.  I attempted to have the ticket put on hold, so I could fly out of Kerikeri tomorrow instead but Barrier Air would not allow it.  I arrived, with significant embarrassment, at friend Liz's house, where I'd arranged to stay and meet her husband and daughter for the first time, well after everyone had gone to bed, at 11pm.

A delayed flight home again in the evening, back to Kerikeri.  It seems to be the way of things.  I was ensconced in the Koru Club, eating free cheese and tomato juice; my colleagues, on whose membership I'd been admitted as a guest to Koru, had long since departed on their flights back to Wellington and New Plymouth but I had a book and free WIFI for the ipad.

I was feeling increasingly sniffly and hot and began to wonder if I'd contracted mumps!  An adult friend we visited a couple of weeks ago now has it and I really can't clearly remember my own immunisation nor infection history.  Sister Rachel says she remembers our having measles and chicken-pox and thinks we had mumps although I thought we'd been vaccinated against it; but there was no such vaccine at the time of that memory.  I wasn't sick though, just tired.

There is a current mumps epidemic radiating out from South Auckland, primarily infecting the cohort of young adults whose immunisation was incomplete or missing, during the time of the false rumours of the danger of the MMR vaccine.  Older adults ought to have already had mumps at some time but some will have missed the infection during childhood.  My friend continued miserably with it for weeks. 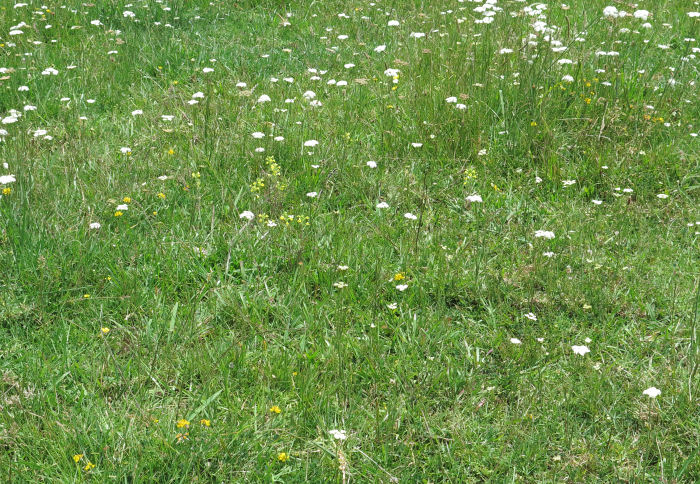 Tarweed appears to have been sown with our agricultural lime, as well as with the lime rock on the tracks - or the cattle inadvertently eat the seeding plants and spread it around.  Thus it has appeared across Flat 5 (which does tend to support the lime theory, since it is only here in these four paddocks, as far as I have discovered to date).

You may be able to see the lighter yellow of its flowers in two places in the middle of this picture. 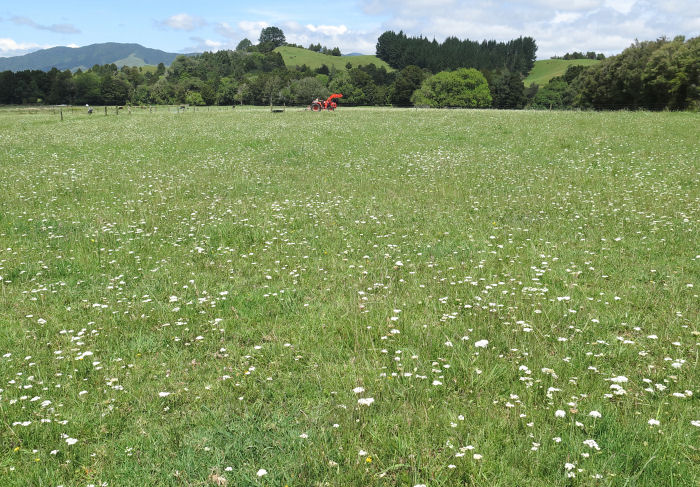 I walked around this very lumpy, pugged paddock, looking out for the weed, pulling it very gently out so I could take the roots from the hard soil and placing the plants in a plastic bag for return home where I put them in the fireplace for later burning.  I wear a nitrile glove on the hand doing the pulling, since the plants are so unpleasantly sticky and foul-smelling.

Meanwhile Stephan, having completed mowing 5a, went in to 5b, where I'd already weeded.  Whenever he saw a plant I'd missed, he stopped and pulled it out.

It was extremely hot work in the middle of a very hot afternoon! 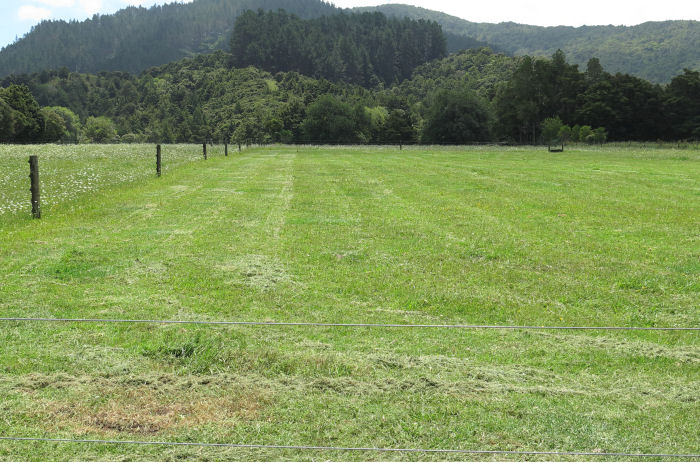 In 5a Stephan had begun mowing around the outside on a lower setting than most of the regrowing grass, so I asked him to put the blades up a bit.  The intention was to cut the Parsley Dropwort flowers but not to mow the grass or the clover flowers. 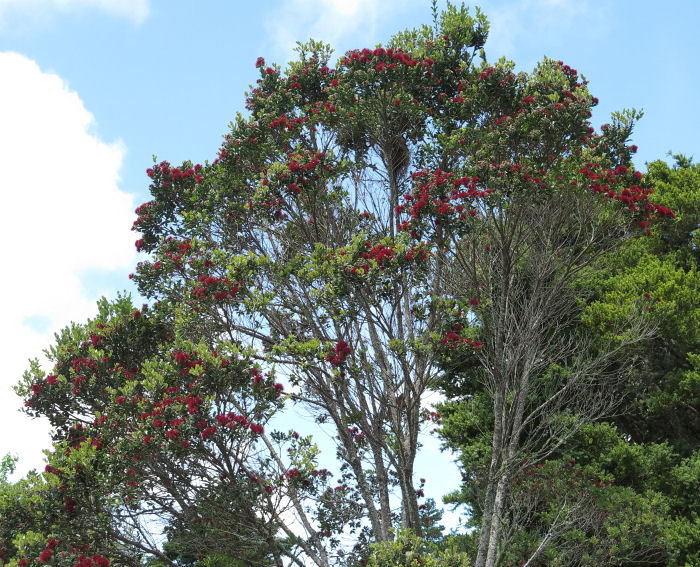 This is the Rata-Pohutukawa hybrid at our gateway, looking very beautiful already.  Some years' flowers are this gorgeous, deep crimson; in other years they're sometimes a less-attractive, less intense red.