The week beginning the 9th of December 2017.
Saturday the 9th 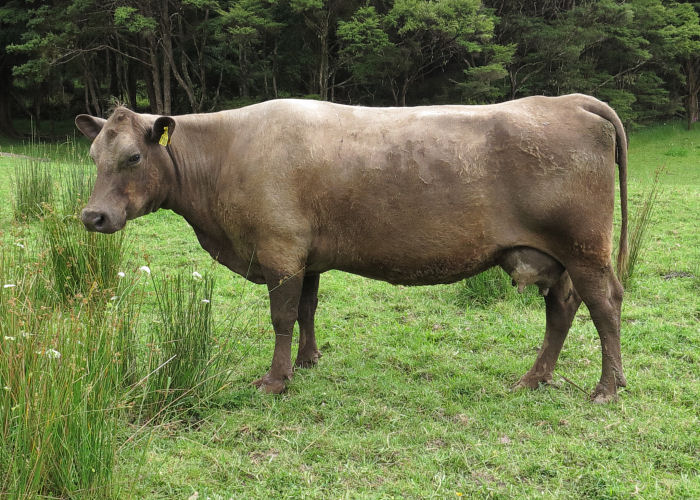 Endberly is so lovely.  As the weather warms she has been losing her winter coat.  Her summer hair feels hard but looks entirely smooth.  Each hair is much thicker and stiffer than that of the black cows. 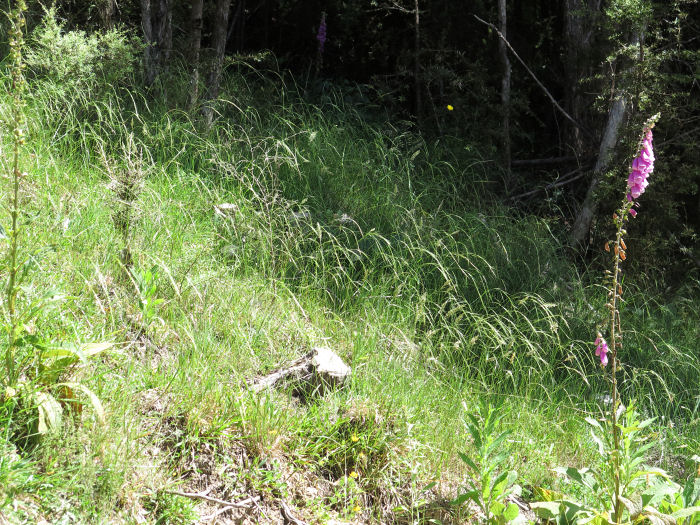 Weeping grass grows all over the PW slopes, getting ready to infest our socks with painfully sharp seeds for the rest of the summer.  It doesn't appear to affect the cattle much, although it does probably occasionally get in their eyes as they graze amongst the seed heads.  I'll usually see one or two animals during the summer with a weeping, partly-closed eye for a day or two as their bodies work to rid the eye of the irritant.

I could take them in to the yards, put them in the head bail, try and find the problem... possibly should but it's always a balance of what will stress them most.  From the back of the farm, it's a long, hot, dusty walk at the time of year they're usually affected. 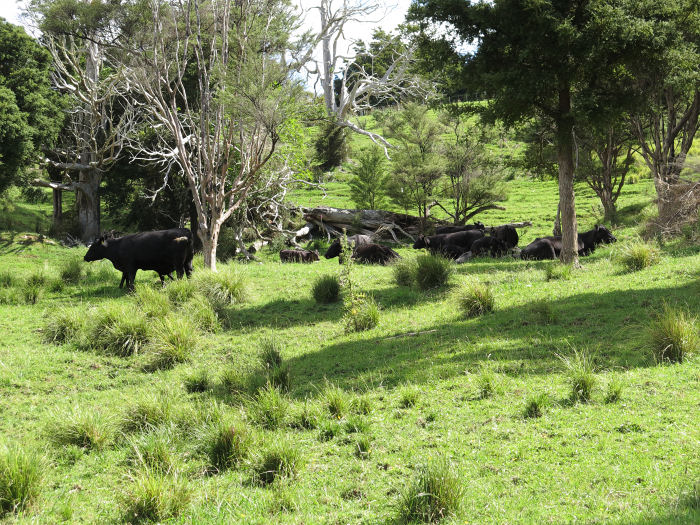 In the Middle Back the cattle often gather here, half-way up (or down) the hillside.

I sense that they have quite pleasant lives most of the time. 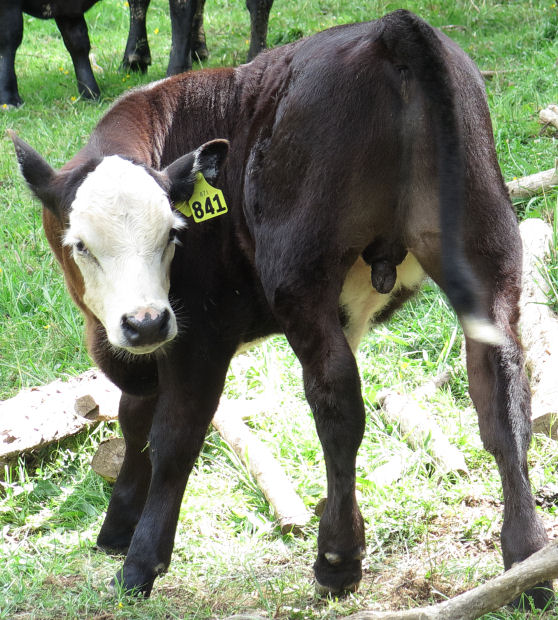 One of the castrated bull calves, with his now-shrivelled scrotum.  There is often some swelling above the ring, as the body responds to the insult but rarely any infection. 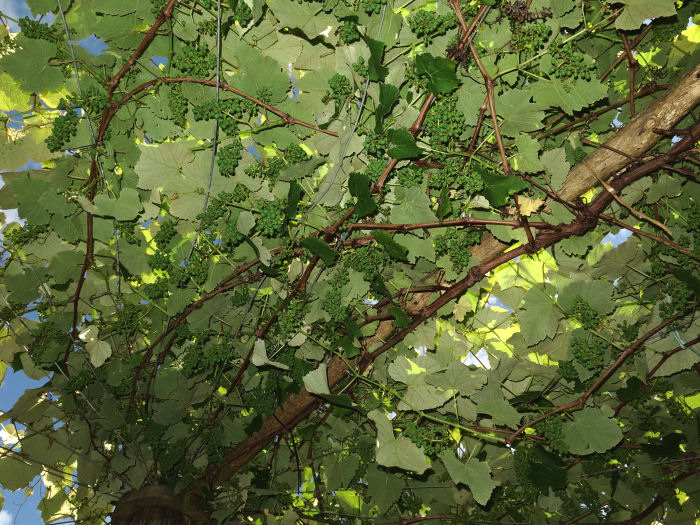 The grape vines growing over the gazebo continue to thicken and are now providing some extremely pleasant, cool shade on sunny days.  I might have to request the construction of some sort of platform, upon which I may lie and eat ripe grapes! 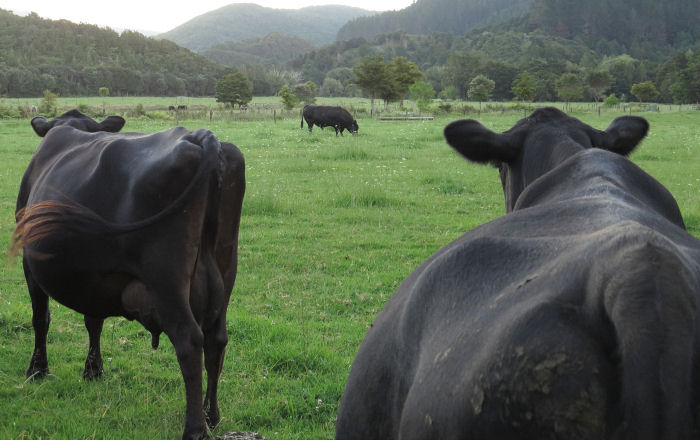 On the basis of some observations three weeks ago, I think Zella is about to come back on heat; so this evening I brought Mr 87 into their paddock while they were down at the milking shed as their calves were separated.

The bull spent ages wandering around sniffing the grass where the cows must have urinated during the day and when they came back into the paddock, he was so engrossed in his own activities, he seemed not to have noticed these big, warm, live cows at all.

Zella and Demelza soon went over and introduced themselves.

I found a nice surprise in the mailbox this morning, must have come yesterday: a spare pair of ear taggers for the cattle.  A lovely someone named Maike had posted on the LSB forum that they had a pair they'd bought but didn't use.  Today, upon unwrapping them, I confirmed that they are an exact copy of our existing pair, which will allow us to do both lots of tagging at one time.  There is a plastic insert in the tagger which needs to be present for the numbered tags but removed for the NAIT RFID button tags, a change which would be impracticable to effect while holding a calf in the race.  With two taggers, we'll have one pair set for each kind of tag.  Thank you Maike! 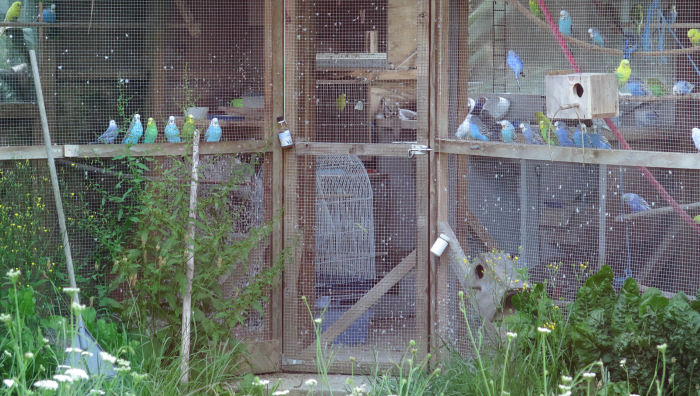 Lots of budgies lined up watching a weasel!  It was a very cute little animal, leaping about and standing up on its hind legs, as it explored the exterior of the aviary looking for any way in.  Tiny, deadly.  There are multiple traps set around the aviary, so we may yet catch it.

Just hatched, a male Monarch - the males have gland on the hind wing, the visible black spot. 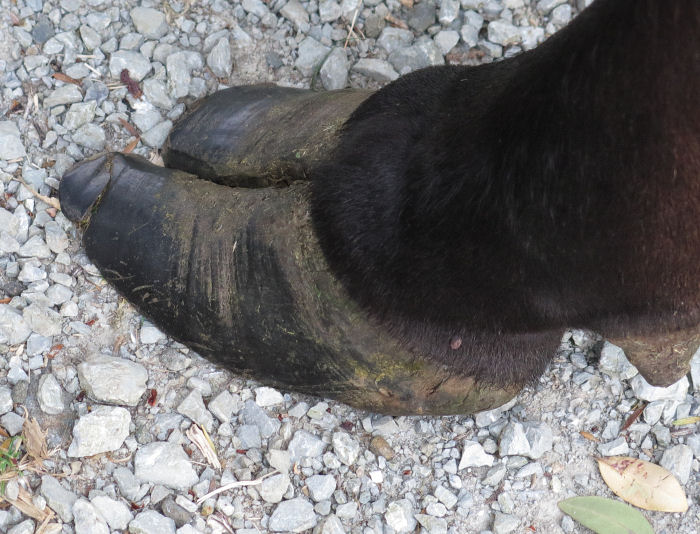 Zella's hind feet are of poor structure.  She would probably benefit from a pedicure, but I'd rather not stress her unless it's absolutely necessary.  This evening I was pleased to note that the front of one toe is cracking off.  Hopefully they'll shorten themselves further in this manner.

I spent much of my evening considering the bulls whose semen is available for purchase this year, looking at pedigrees, EBVs, including the recently-introduced EBV for "docility".  Considering the nuttiness of some of the calves in recent years, I decided on two bulls with positive numbers for that trait.  There goes another couple of thousand dollars.  Some people buy fancy telephones, fancy clothes; I buy bull semen.

We went to town for our pre-Christmas shopping expedition this morning.  It took much longer than we planned, only because we kept bumping into lovely people we know, with whom we stopped to talk - some more than once.  It was all less expensive than usual, since I've stopped buying wine.  There are probably things we've forgotten, but at least now if we have to venture back into the increasing madness of this time of year, it'll be a relaxed foray for one or two things, in the midst of everyone else's stressed rush. 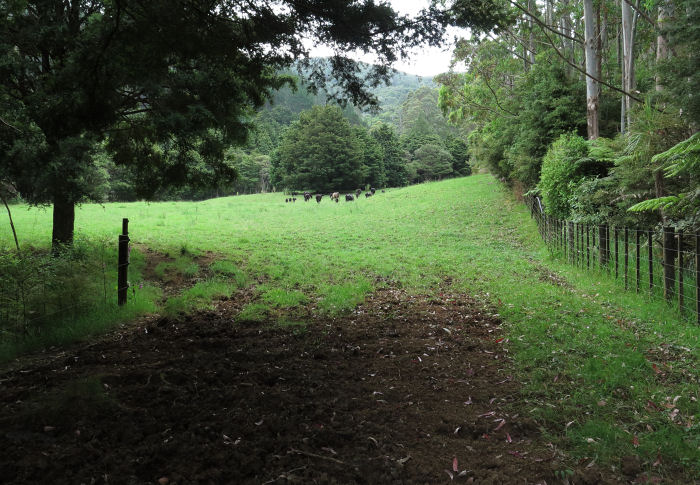 Cows and calves in the Back Barn.

The fence on the right is the northern boundary and the fence-posts on the left are part of the riparian reserve.  In the winter, water sometimes flows across this muddy patch and the large gum trees on the neighbouring land cast so much shade that it takes a long time to dry out. 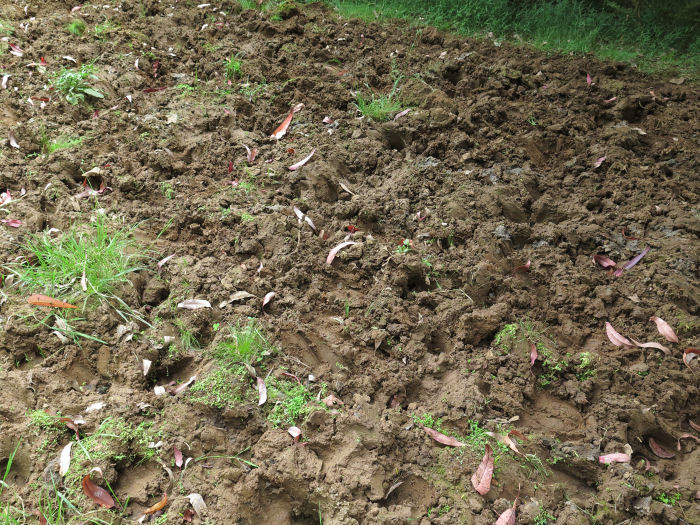 So that while everywhere else is concrete-like already, this area is still soft and damp. 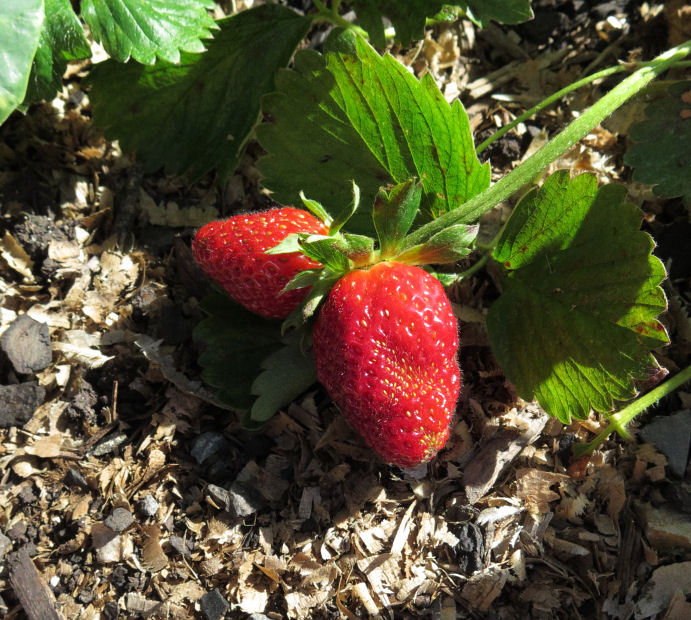 Stephan, who never promised me a rose garden, this year planted a lot of strawberry plants, which he assures me are for my exclusive pleasure, should I wish to eat them all.  Nice! 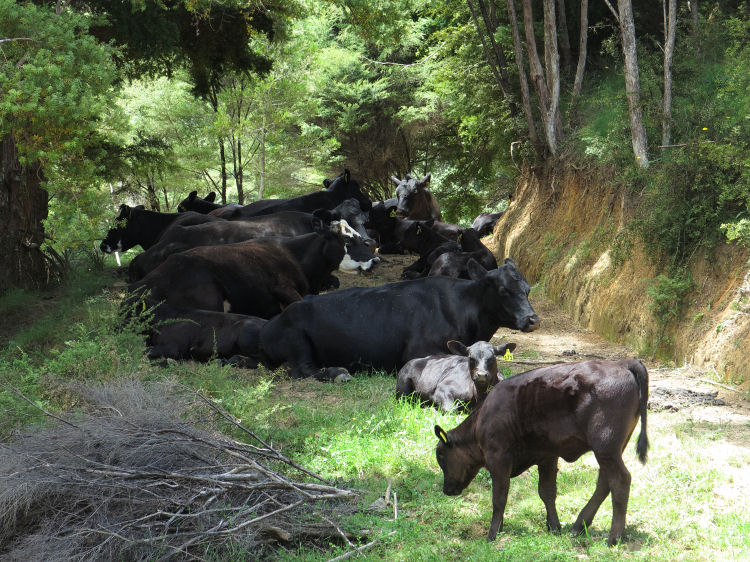 One of my great pleasures in the summertime is watching cows sitting around in the shade.  They always look so peaceful and relaxed.

Stephan put the milking machine together and has run it a few times while Zella is nearby and she really doesn't like the noise.  We arranged to get some extra lengths of hose so it could be housed in a small cupboard extension to the shed.  The machine needs to be up out of the reach of potential flooding, should we ever have such an event again - highly likely in the ever-changing climate. 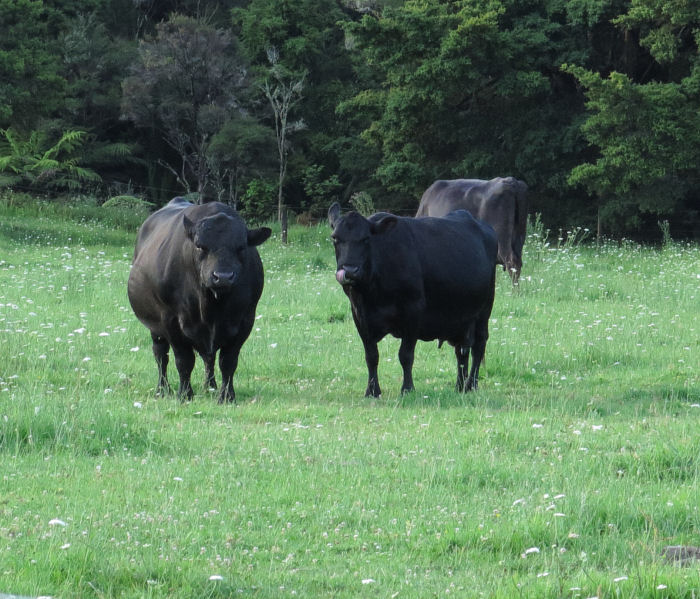 I brought the bull in for Zella, not Demelza.  This evening, when separating the calves, I put Demelza out with them, leaving the bull and Zella together.  Stephan will have to keep Demelza away from the bull for the next couple of days.  I have other plans for her and this is too early for her anyway.

Off to Auckland on the 6.20 flight this morning, for another Vet Council appointment tomorrow.

Stella's singing teacher held her end-of-year recital in the evening.  An old friend of my other sister, Rachel, was there as one of the singing students and her rendition of The First Time Ever I Saw Your Face was spine-tinglingly gorgeous.  There's something very special about live music.

Stella sang a couple of her own songs.  It is not just family bias that says she's a very talented young woman.

After a very interesting and useful day near Christchurch, I ended up in an exhausted, migraine-affected, somewhat tearful state when my carefully planned journey home got all messed up by plane delays after someone had some sort of medical event on a plane down from Auckland.  Barrier Air (an airline I have supported since they took over the Kaitaia route when Air not-New Zealand left our region), don't fly up here on Saturdays any more, so missing the Friday evening flight created a real problem.  I needed to get home, primarily because Stephan shouldn't be doing too much walking around on his healing knee.

A very helpful man in Christchurch booked me on the flight from Auckland to Kerikeri in case I missed the Kaitaia plane (which I did, by a few minutes) and so I managed to get a bit closer to home and was then transported the rest of the way by a nice guy named Alex, who runs a shuttle service between Kerikeri and Kaitaia.  I had fortunately already made enquiries with him for a trip next week, so when this evening's problem arose, I had his number to hand and was able to ask him to come and get me at short notice.  He lives just along the road from our turn-off, so Stephan drove down to the main road and met me at 9.30.  It was a long day!