The week beginning the 2nd of December 2017.
Saturday the 2nd 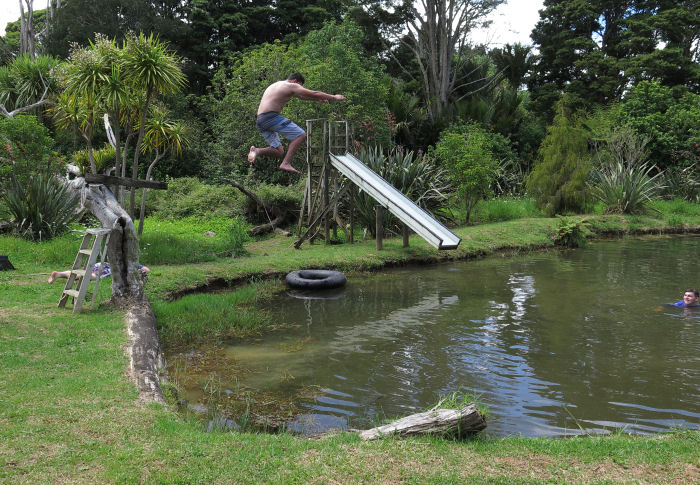 Campbell from next door asked if he could come with his two friends for a swim in the pond?  Of course!

Later on his mother, Sandy, came and sat with us in the shade of the grape vine as we watched them jumping, sliding, diving and swimming. 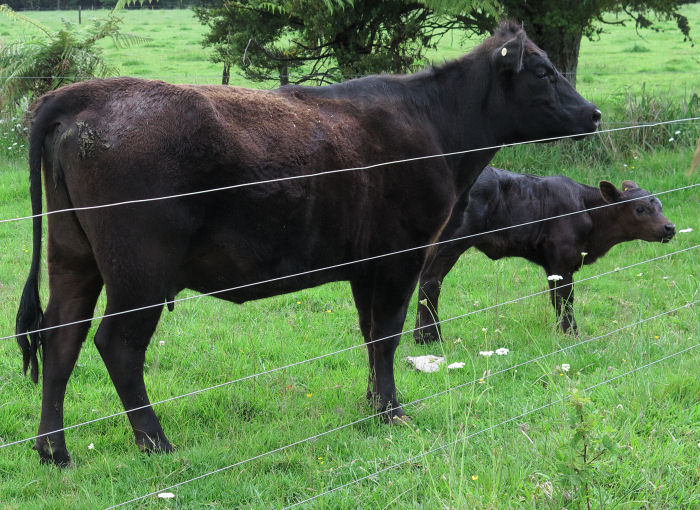 Queenly 149 still looks pretty awful although she is at least alive and seems healthy enough.  What she isn't doing, which isn't altogether unusual in a heifer mother, is produce as much milk as her calf needs to grow as well as she could.  Daughter is definitely lacking some muscle mass and has none of the fat and bloom of most of the other calves. 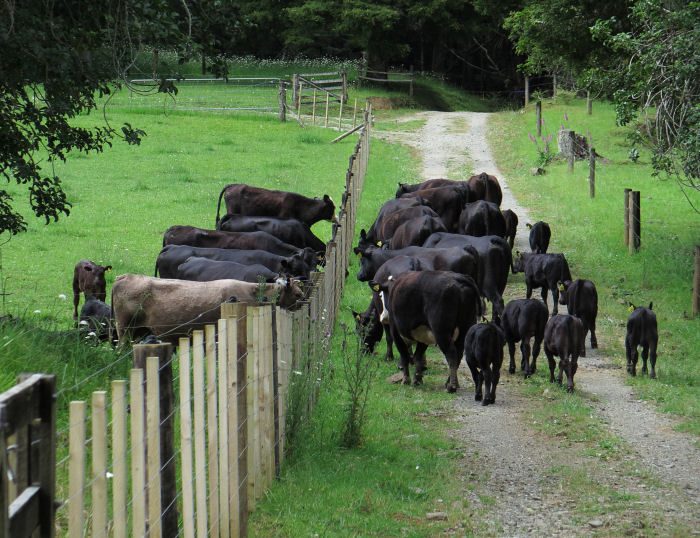 The number two mob of eleven pairs, on their way out to the Small Hill, greeting the 12-pair mob in Mushroom 1.

In a herd where everyone is related or has known each other for all their lives, do the cows greet each other as potential rivals or friends?  It's hard to tell when they're meeting through a fence. 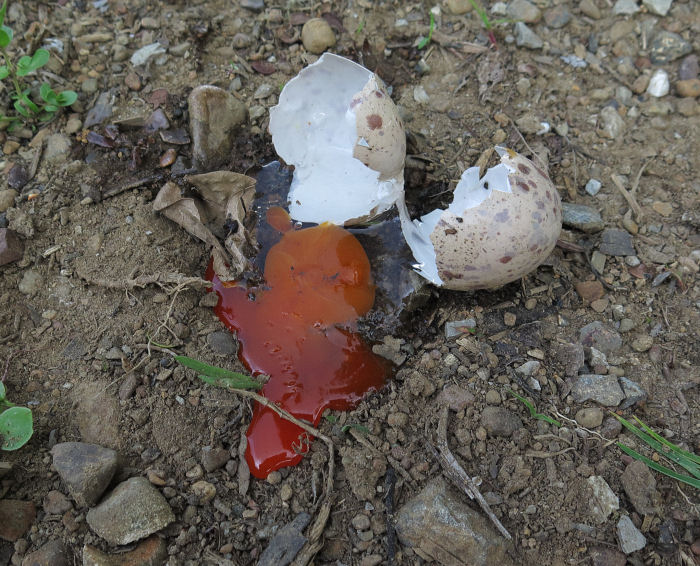 Why there was a Pukeko egg on the track where the cattle walked, I do not know.  Freshly cracked, the yolk is a very dark colour. 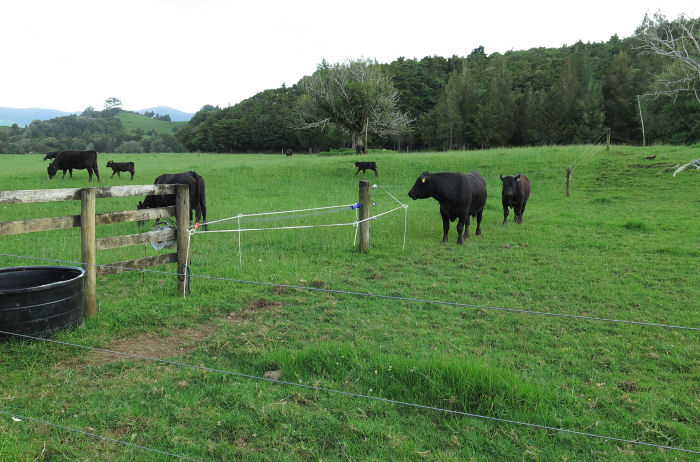 Before moving the twelve mob from Mushroom 1 to Mushroom 2, I erected this double tape around the gateway between them and the bulls in Mushroom 3.  A single spring gate wouldn't reliably stop an amorous bull looking for some female company and I don't want any early calves! 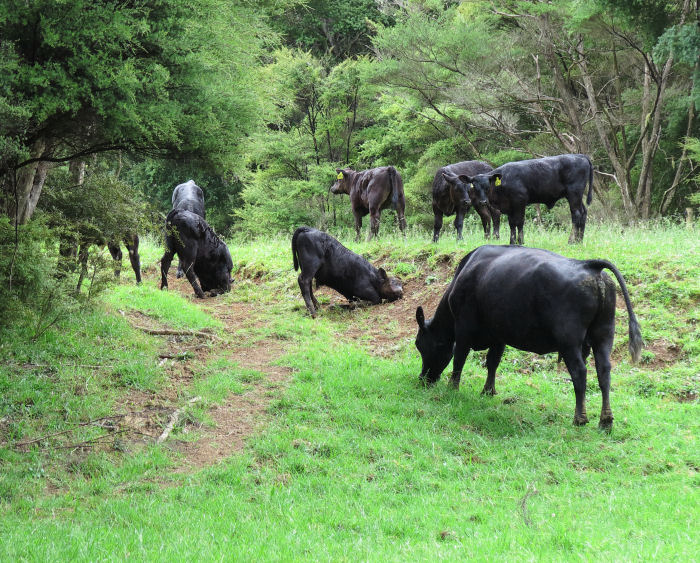 A very warm day, with showers in the afternoon; perfect weather for spring.  Yesterday was the first day of what turned in to a run of warm temperatures, every day on average being two to three degrees warmer than the end of last month.
(I calculate the daily average of the minimum and maximum temperatures.)

Late in the afternoon I moved the number 1 mob of 11 pairs into the Spring and watched as most of the calves did what their mothers do with open soil (except right now there was fresh grass which was more attractive for them), rubbing their heads in it, going down on their knees in excitement. 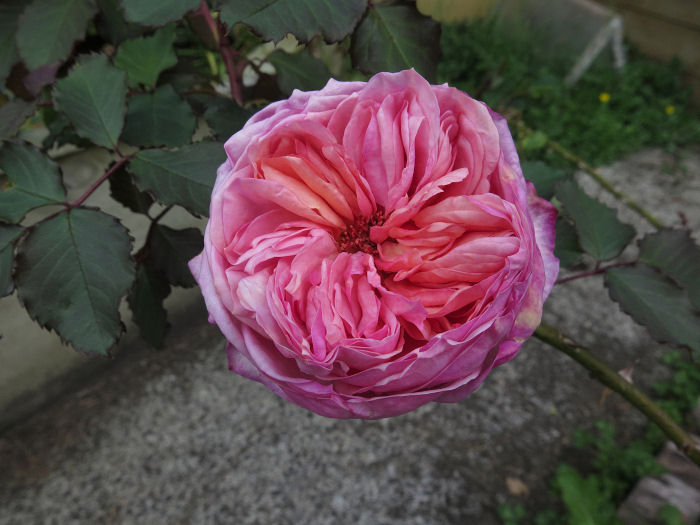 I think this may be a rose I bred myself.  There were several grown from seed that ended up in my greenhouse and then in this little garden.  This one is very fragrant. 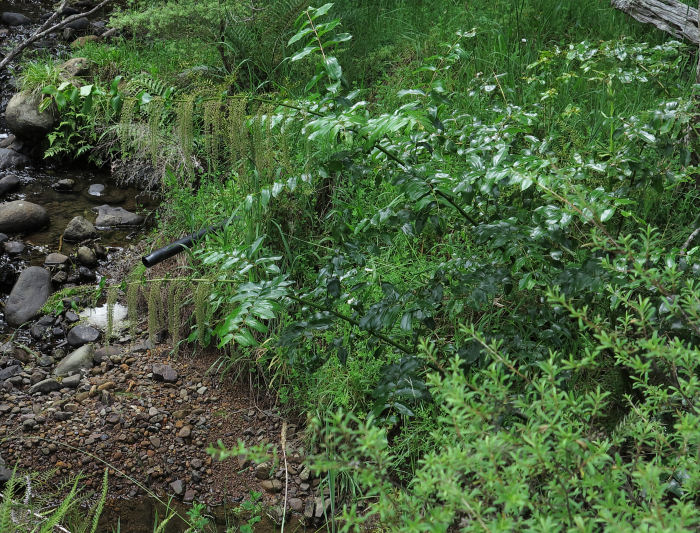 Tutu, the toxic native, growing on the streambank between the Spring and Back Barn paddocks.  This plant and others have emerged since the cattle have been excluded from these areas, indicating that they used to eat quite a lot of the small plants before they got big enough for me to notice. 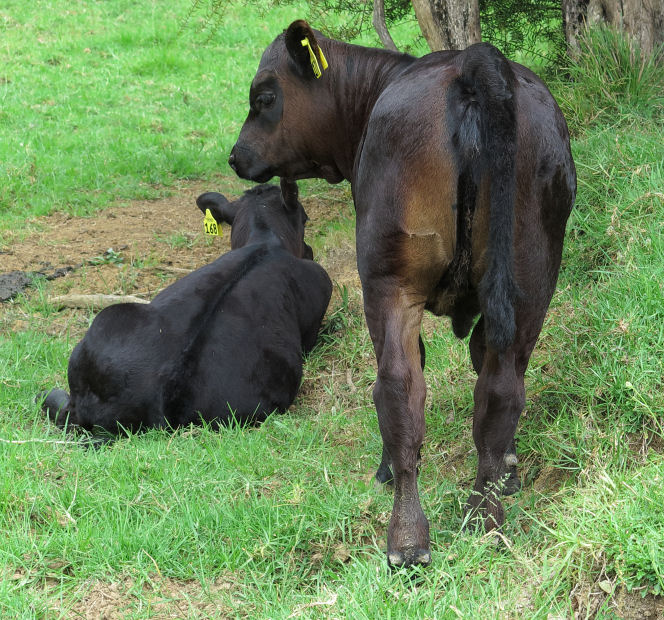 Dushi 170 has a nice bum.  Eva's calves often do but in recent years that hasn't remained the case as they get older.  Hopefully this calf will be an exception.

The other calf is Gina's daughter. 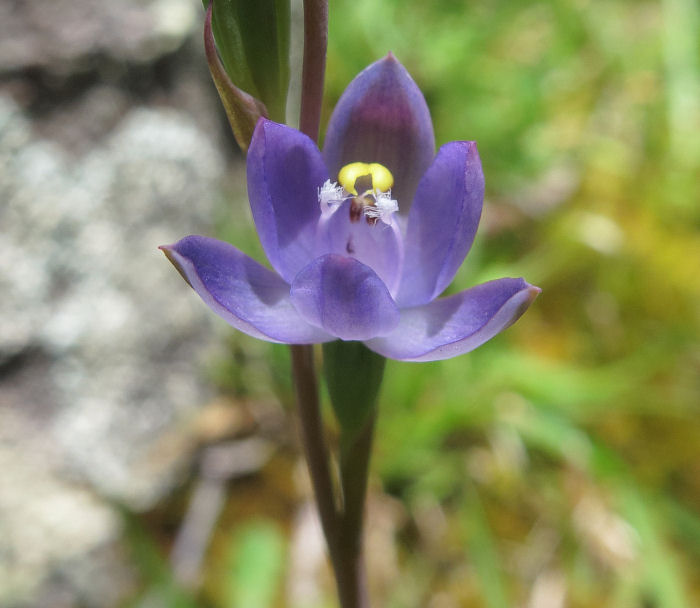 On this very sunny, warm afternoon, I managed to find an open orchid flower.  They're not usually still flowering in December but were mostly very late this season. 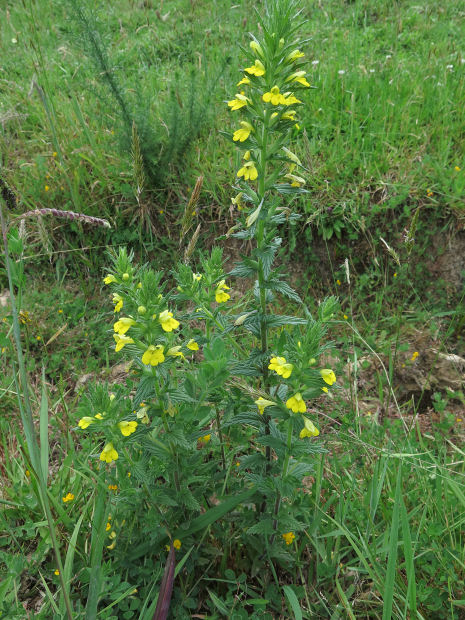 We have Bellingham Quarries to thank for this appalling weed, one of the many unwanted species they don't control at the quarry and then truck onto farms all over the district.  This is Tarweed, named presumably for the horrid stickiness of the leaves and the awful smell when the leaves are grabbed by hand.

I can't find anything on its toxicity so it's not dangerous to the cattle but as an invasive and spreading weed, it is something I wish to eradicate if possible.  I imagine the animals avoid eating it because of its texture and smell.

Stephan sprayed this track last year and this season lots of it has come up as multi-crown plants and I strongly suspect the spray only knocked it back, didn't kill it.  This season I am going around with a glove and a plastic bag and pulling it gently out by the roots.

I saw an extensive patch of this in a roadside paddock north of Moerewa, noticeable because the yellow is different enough from the other common yellow flowers to really stand out.  It looks very much as if it spreads by dropping its seed where it is and gradually expanding its colony.  Thus it must be stopped.  Here it is now widely spread because we had metal spread and in a couple of paddocks it must have come in with the fine lime as well.  It is most annoying.  I could be doing other things with my time! 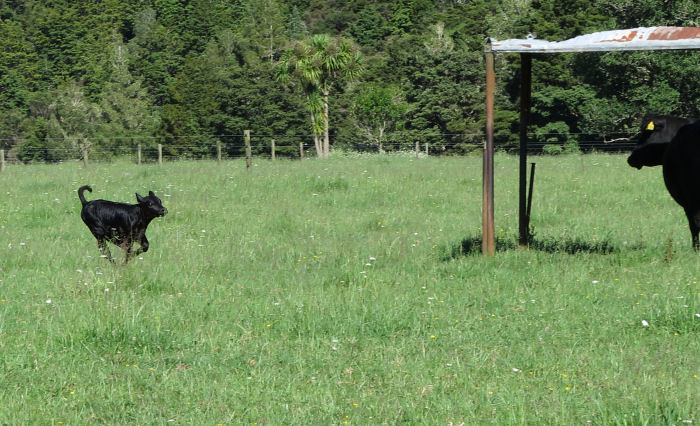 743's daughter appears very lively and healthy, despite her strangely bloody poo in the first days of her life.

743 has a surprisingly loose udder, which is disappointing.  This is her third calf and an udder ought to be sound for a lot longer.  Her maternal line had terrible udders, something I was trying to fix but I've obviously taken a wrong turn with the selection of 743's sire.  Her mother, 703, had a fairly good udder, much better than her grandmother's and a vast improvement on great grandmother 371's, whose wasn't quite as awful as white-face 46's.

46 was probably a Friesian/Hereford cross - or at least 50% of that, perhaps with Angus on the other side. 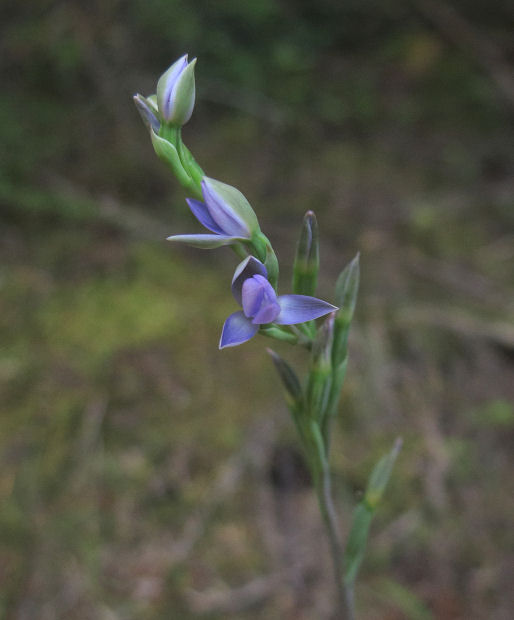 This is one of the orchids on a bank beside the track heading up the hill through the Big Back North.  They're growing in a shady place, so I didn't expect to see them open even this much.  But with warm air temperatures, even without direct sunshine, they've opened a little. 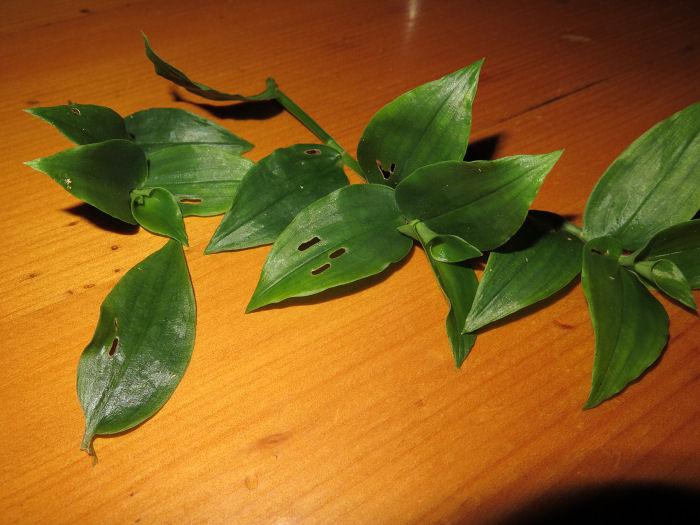 In January entomologist Jenny Dymock brought a couple of bags of Tradescantia leaves from a location in which one of the biological control beetles has thrived.  Jenny recently emailed to ask if we've seen any evidence of their establishment here since - we feared the big floods had killed them all off!  But Jenny tells me that these are Tradescantia stem borer beetle feeding holes, so they've survived.  There weren't very many leaves with holes so I put these ones back where they came from, in case there are beetle eggs or grubs in the stems. 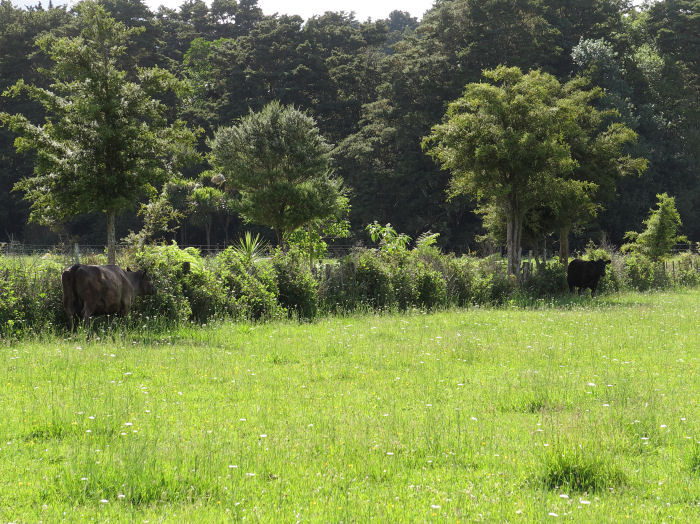 The trees growing along the Flat 1 northern fenceline are now providing significant shade to the paddock.

There are more growing up and every now and then Stephan prunes the lower branches, so we'll end up with clearer trunks which won't obscure our view across the flats too much, but will provide increasing shade cover.

The bushes are our main blackberry crop.

Trying to get some things tidied up before the end of the year, I spent my day going through accounts, invoicing people for work done and other money owed.  Being someone's employee would be much simpler (except I'd hate it).  We start running a bit low on funds by this time of year, partly through inattention and procrastination over invoicing.  Must do better. 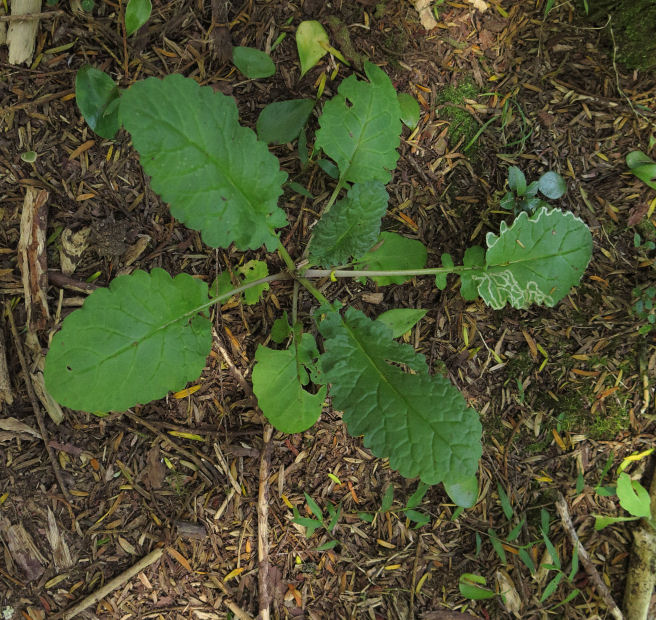 After moving the number 1 mob into the Middle Back, I wandered along the treed slope of the Spring, looking for orchids.  This Ragwort plant (and a few others I saw) has been host to some sort of leaf miner.  We need far more of them!

I did a search for "ragwort leaf miner" and discovered that the Ragwort leafminer - Chromatomyia syngenesiae is exactly what it is.  The internet is a wondrous thing.

Landcare Research has a great list of Factsheets on Interesting Insects and other Invertebrates. 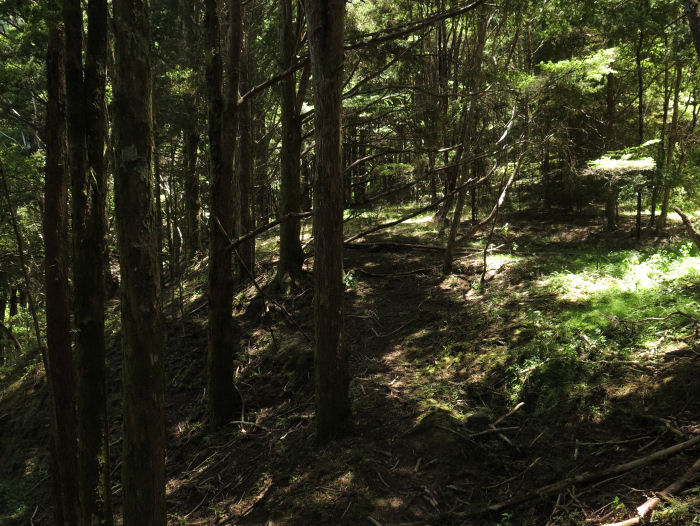 This is a lovely place to walk on a warm day, in the deep shade.  At some stage we'll fence parts of it off and there'll be much more undergrowth without the cattle browsing through it. 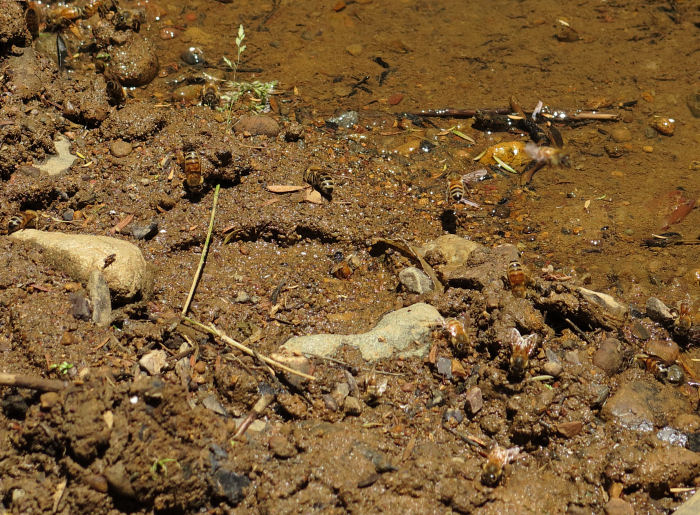 I have to step very carefully across the stream crossing from the Spring to the Back Barn, to avoid squashing drinking bees from the nearby hives.  They drink only from the sunlit silt where the water is warm, not from the shady places, nor directly from the stream. 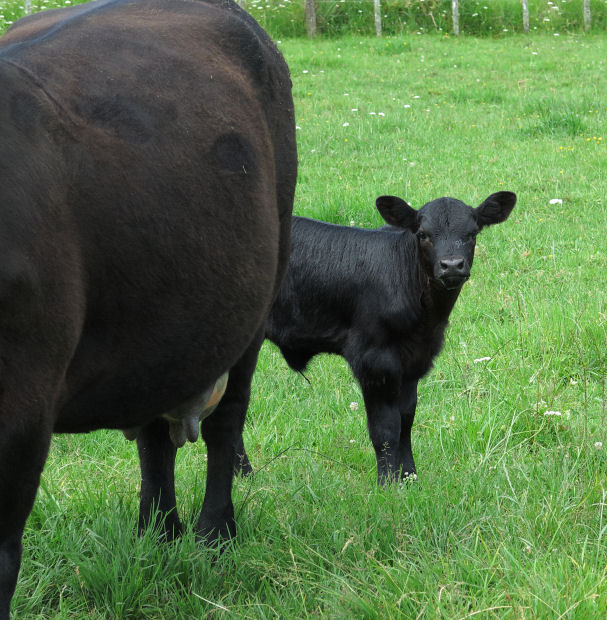 743's daughter.  I moved these two and companion Ida 145, from Flat 5a into Flat 1 with Grey 607 and Queenly 149 and their two calves.  This little calf appeared very pleased to have some small friends to play with. 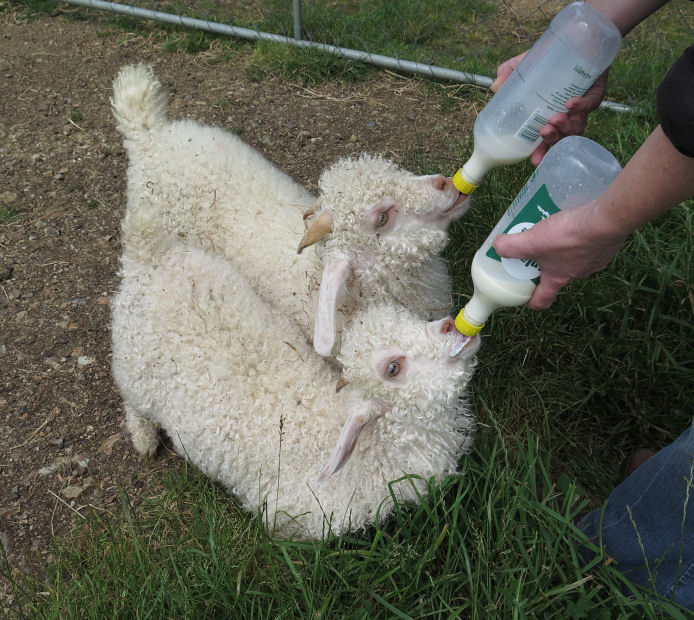 Stephan had a recheck appointment with the lovely knee surgeon in Whangarei today, so we took the opportunity to visit Kate and Geoff and their goats near Helena Bay, on the way down.

These two Angora kids are on decreasing feeds, near weaning. 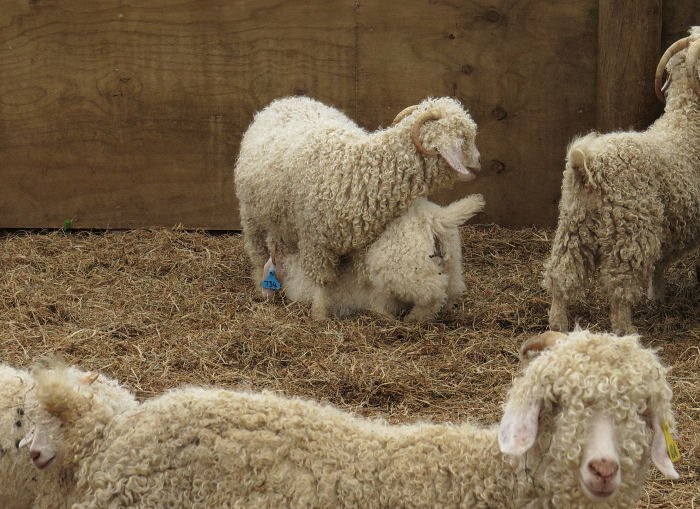 Others are almost too big to fit under their mothers. 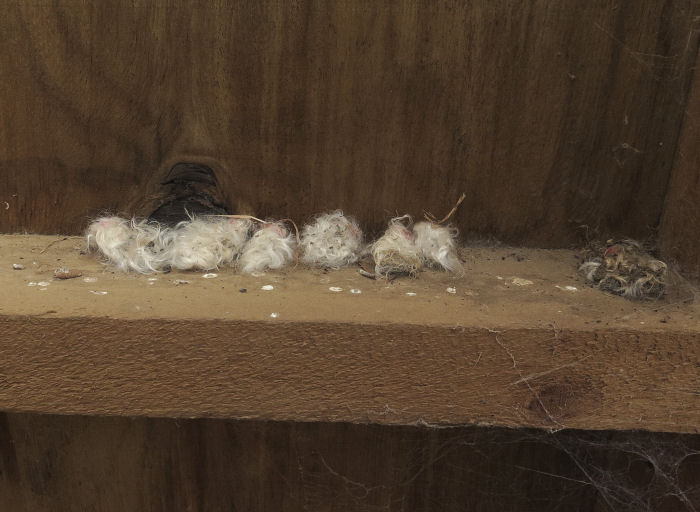 Kate has a collection of tiny scrota, picked up from the ground as they've dropped off their rubber-ring-castrated owners.

I find it very comforting that Kate collects weird stuff, as I do.

After lunch we continued on to Whangarei and had a fascinated look at the pictures of the inside of Stephan's knee, taken during his operation.  Then to visit our lovely friend, Sheila, who we try and visit whenever we're here. 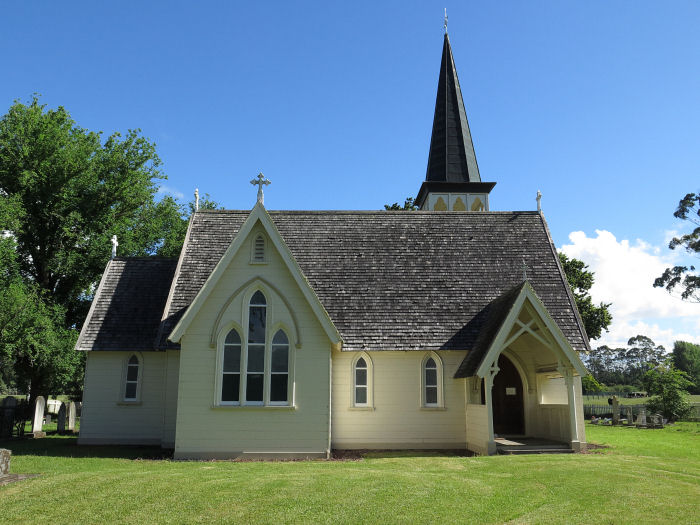 On the way home, in need of a walk around for a break, I stopped at the Church of the Holy Trinity at Pakaraka.  It's such a pretty building.  There is some information about its history here.

We strolled around the graves examining headstones before trying the door and, finding that the church was open, went inside for a while.  I experience an odd sensation whenever I go into a church with old open beams and trusses, something like a faint recollection of a dream from a lifetime ago, similar to the sort of feeling reminder one has when detecting a long-unsmelt scent.  It's not altogether comfortable and I have no idea what it is about. 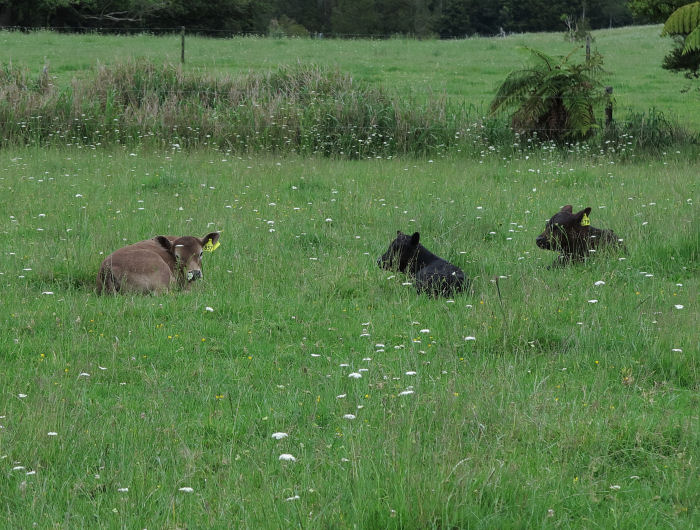 Home again and out to check on some of the animals.

Little newest calf seems to have settled in with her new friends very well. 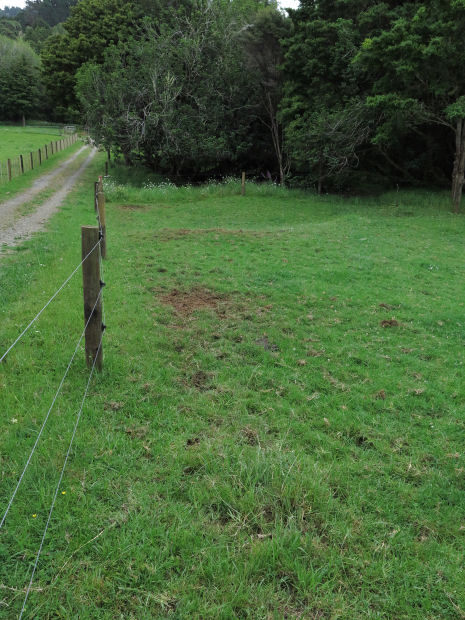 I thought this might happen: big bull is in this paddock and the two young bulls are across the lane in Mushroom 1.  Mr 87 must have stood here for long periods during the day telling them how superior he was, pawing the ground, making a great mess.  Ridiculous.