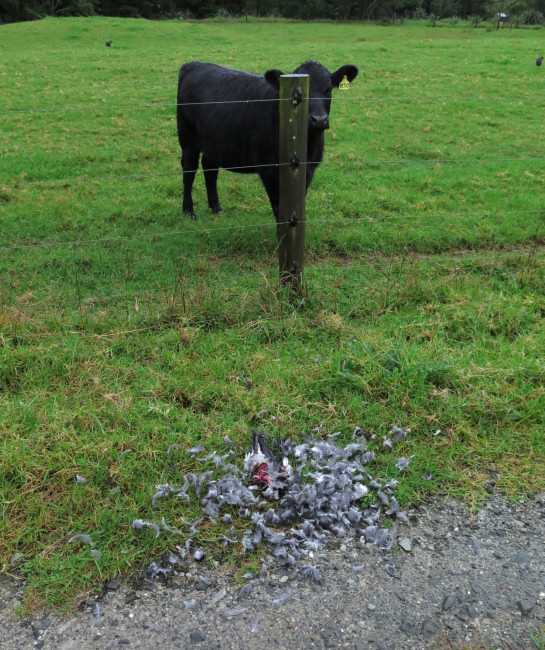 I shot a Magpie off this fencepost from the house this morning.  It was raining and then rained more heavily for some time afterwards, so I didn't come out to collect the body.  By the time I came out late in the afternoon, someone had already eaten most of it!  I suspect a hawk. 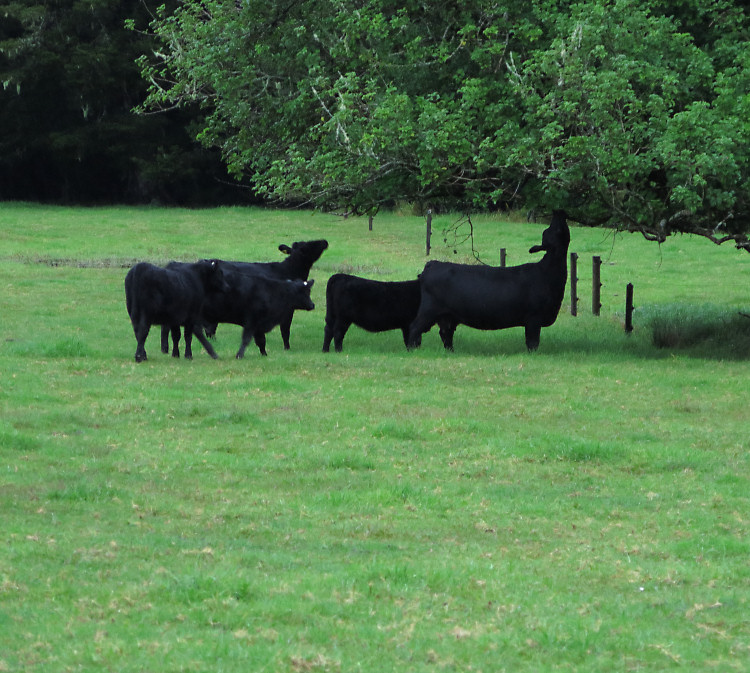 I shifted the cows, calves and yearlings from Flat 2 to Flat 3 and Eva headed straight for the Puriri trees hanging over the fence, to see what had grown low enough for her to eat since last time she was here.  She has the best reach of the herd, so she has practised and is probably better at reaching the leaves than she would have been had someone else been taller or better.  The others obviously thought there would be something for them too.  Wrong. 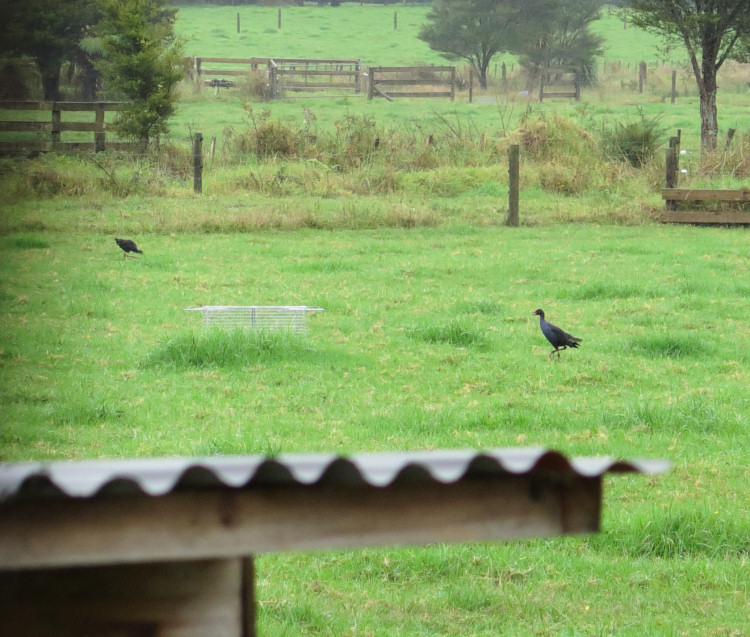 Our new Magpie trap arrived last week and we put it out where we could see it today, where the three - now two - Magpies keep visiting.  They didn't come but some Pukeko crept around it with obvious consternation.

It rained all day, so I didn't venture out at all. 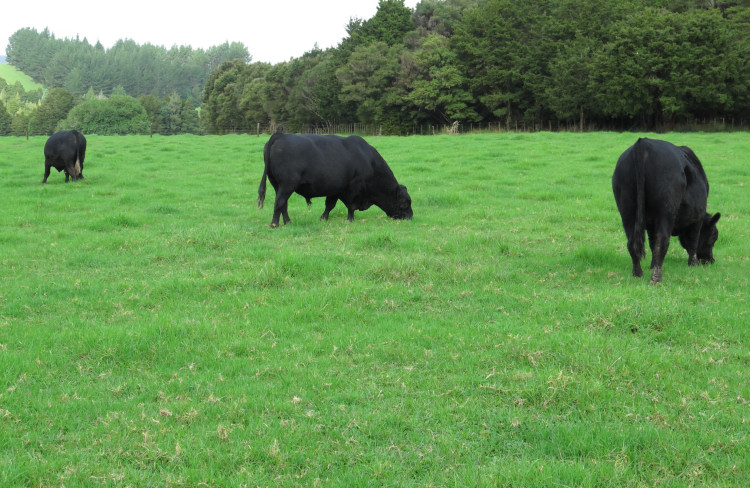 Big Mr Bull in the middle, continues to improve - he stands with his weight off his right hind leg, but walks with a barely detectable limp and will run if some cows go past his paddock, without any appearance of pain afterwards.

I need to wean the bull calves before I can arrange for these bulls and the cull cows to go the works, since one of the cows is a bull-calf mother. 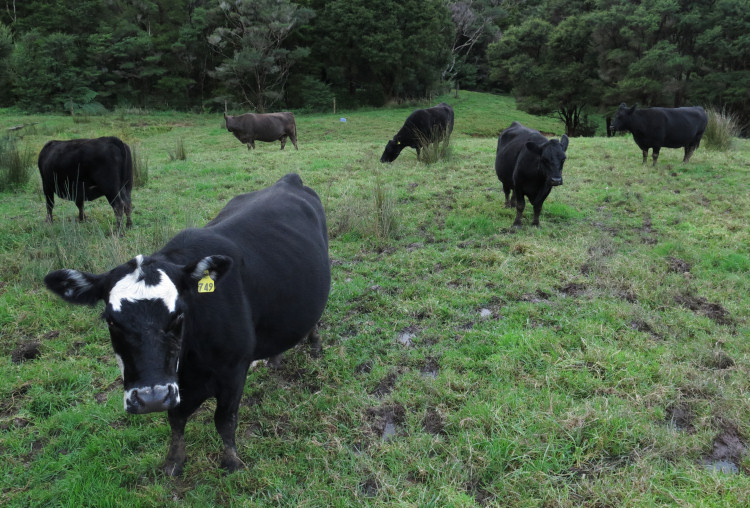 The weaned cows are all out in the Spring paddock, mostly grazing the first hillside when I arrived.  I wandered around amongst them, not managing to count everyone because several of them were on the other side of, or amongst, some trees.  I ticked them off my list as I found them but hadn't seen 773.  I took this picture because I could see, down the hill where I'd presumably passed her earlier without noticing her, 773, fourth from the left.  I couldn't see her tag number at that distance but I can always recognise her by head and body shape.

I went to Auckland, this time on a last-minute whim and a "free" ticket.  Today was originally a meeting day for my Vet Council Complaints Assessment Committee, with a complained-about vet; but the meeting had been postponed.  The Vet Council had unfortunately bought tickets that were unable to be changed or refunded so they were there for me to use, or not, as I wished.

I decided I might as well take the opportunity to have a little holiday trip, go and see Liz and her family again, check on Jill and spend a bit of time with Jude. 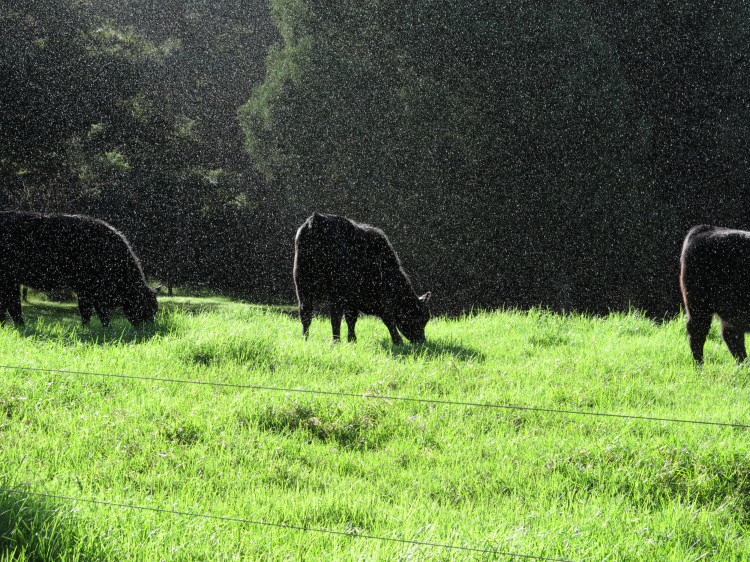 I weaned the three bull calves this afternoon, drafting them into the House paddock and their mothers into the bottom of the Windmill.  The other 11 animals went into the top end of the Windmill paddock.

I took this photo as light drizzle fell in the sunshine.

Stephan went up into the bush to fix the water intake, since it keeps blocking up and we'd actually nearly run out of water, a pipe having come off at a trough on the flats and run the 30,000 litre tank dry!  The new 5,000 litre tank out the back still had water, so we could have used that as an emergency back-up, had a bush-walk been difficult today.

We keep trying to come up with better ways of filtering the intake, so it keeps running when forest debris is washed into the stream by heavy rains.

Zoom was on heat today.  It's not surprising that she has hit puberty reasonably early, given her body-weight and excessive nutrition.  She was very noisy!