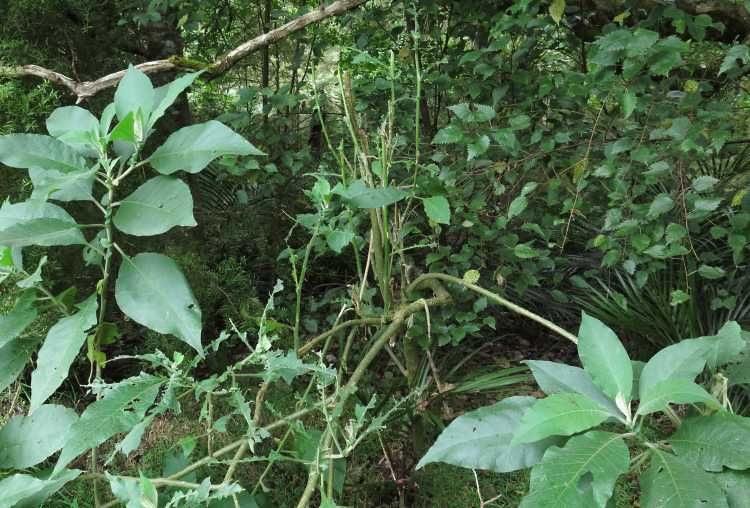 I went out to check the cows, calves and yearlings in the Big Back North.  I can't remember if I saw them or not but went for a walk into the bush reserve on my way back, just enjoying the quiet.

Something has been eating a lot of the Tobacco Weed (or Woolly Nightshade); pity there's not more of them, whatever they are! 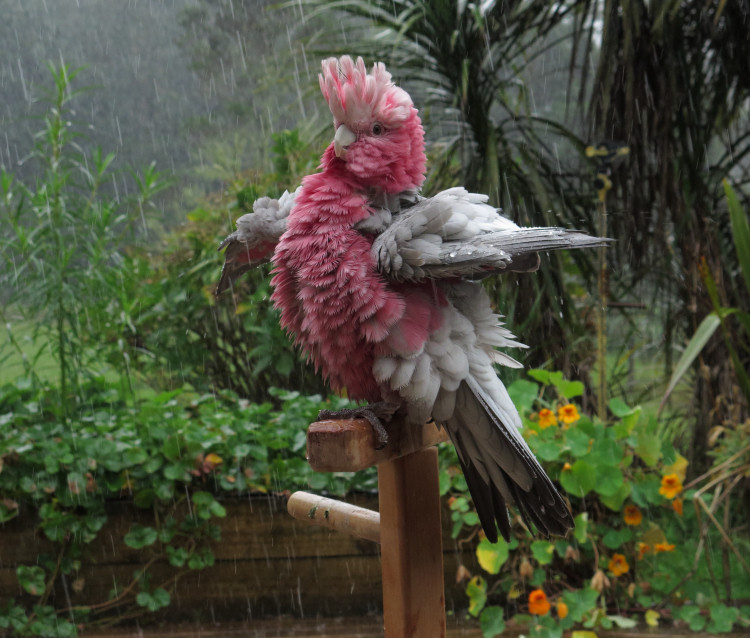 It rained this morning so I put Floss out for a shower.

If I leave the door open a bit, she comes in whenever she's had enough, climbs her cage to preen and dry her feathers again.

The rain this morning amounted to 3.1mm; not enough to explain this horrible sight.  Whatever is going on upstream is repeated and, I strongly suspect, deliberate. 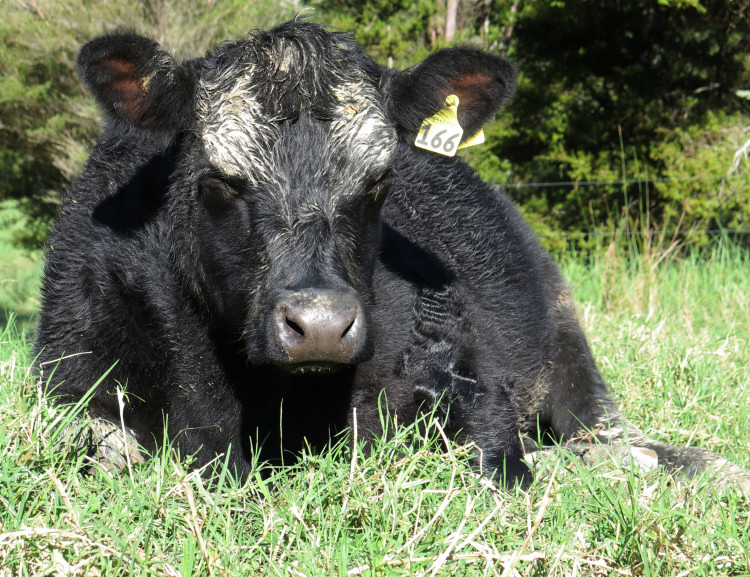 The afternoon was warm and sunny.  Here's Fancy 166.

I offered the cows, calves and yearlings the Small Hill as their next option which they refused - they all just stood in the gateway, wouldn't go on through.  I decided not to force the issue and offered the Bush Flat instead, which they liked much better, all quietly walking through the opened gates before spreading out to contentedly graze.

I'd left the bigger mob of weaned cows walking out to the Frog paddock and went around to close the gates behind them, to meet them all stampeding back in my direction.  I quietly ushered them back and tried to see what might have spooked them.  I suspected a pig or a dog, perhaps, but could see no evidence of anything amiss.

In the evening I took them a salt lick, wondering if they're a bit jumpy because they've not had any for a while, and moved them on from that small paddock to another further out.

After another drizzly morning, in the afternoon the sun shone warmly.

We went Over the Road to bring the young mob down across the road.  Heifer 793 was sitting quietly at the bottom of the hill and got up for a huge stretch, before walking up to climb the hill with the others and run down the other side to the gate.  This will be her last day: she is booked to meet the slaughterer tomorrow. 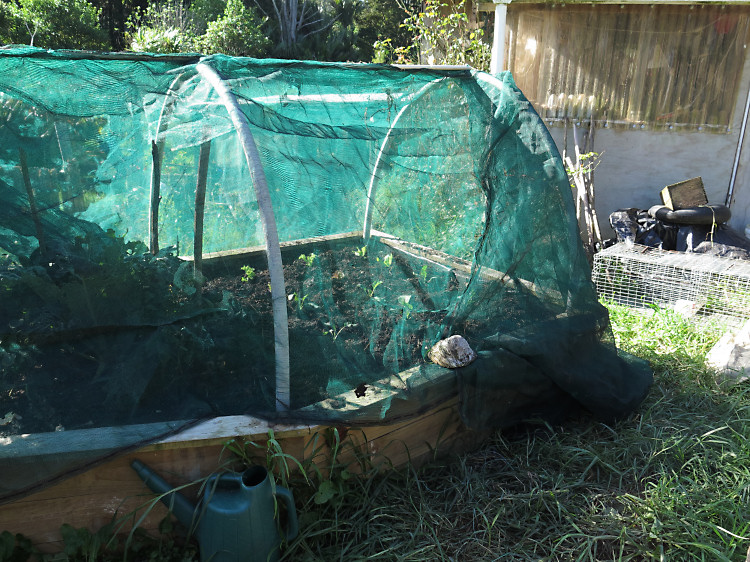 Our raised gardens have been very satisfactory and having worked out a way to protect them from the attentions of the roosters, which are allowed out around the garden while they grow to a nice size, Stephan planted some winter greens. 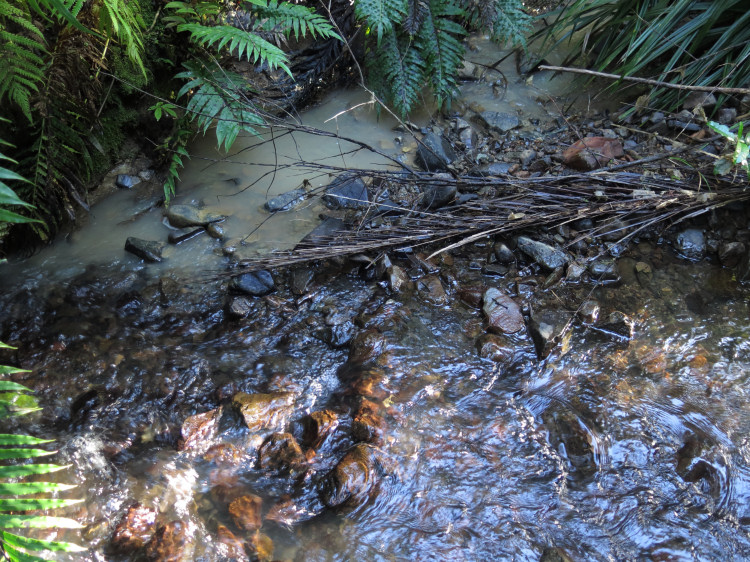 After lunch we went for a walk through the Buselich Reserve, to see if we could pin down the source of the stream fouling.

I had expected to find the main stream (running along the bottom of the picture) carrying the murk, but it turned out to be a minor tributary that flowed from a wetland area that has recently been subject to alteration with a digger. 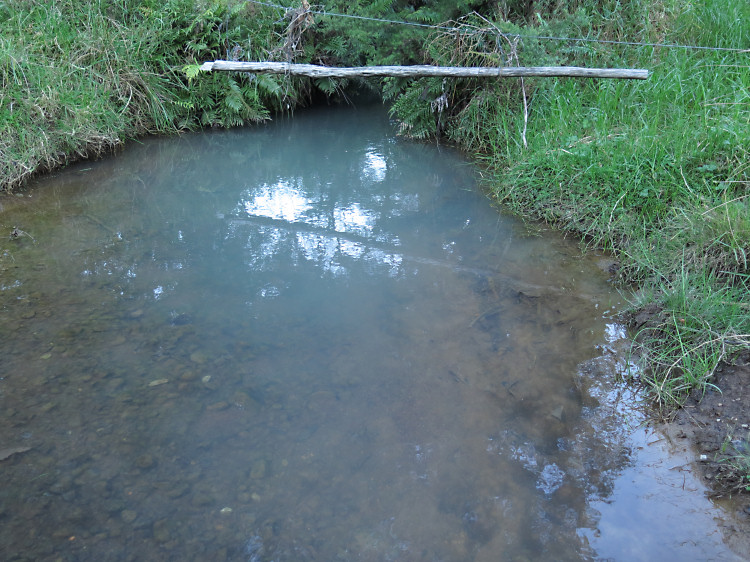 This is the appearance of the water downstream at our crossing today.  To have looked as it did yesterday, the flow from that wetland must have been nearly sludge and as there was insufficient rain to have brought so much fouling into the water on its own, I conclude that there are cattle somewhere in the wetland, stirring up the muck so that it comes directly into the waterway.

After looking over the fence to see how much we could see of the problem, we turned back into the bush and up the hill to the highest point in the Buselich Reserve.  To our great disappointment we found cattle faeces in several places, although no very recent evidence.  I would estimate a single cow might well have left such traces, sometime during the last two or three months and I do wonder if that coincides with the period during which the lonely cow from the property on our southern boundary disappeared for some time.  That same animal spent weeks in our bush reserve eighteen months ago, without our knowledge.

I think this is a Miro trunk (Prumnopitys ferruginea), a tree I would previously have incorrectly identified as Mataī (Prumnopitys taxifolia). 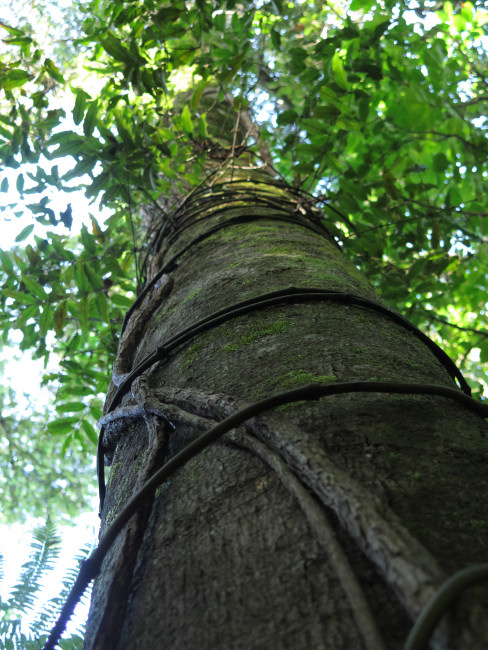 I think this trunk is Kohekohe, encircled by Supplejack vines, whose foliage is in the picture.

We found all manner of tremendous trees and fortunately not very much evidence of pigs.  The Rātā trees up there are spectacular.

At home I sent the GPS coordinates of the cattle evidence to the Department of Conservation, since the reserve is under their management and they obviously need to something about the boundary fencing.

One of my older cows, 606, was the only one to have kept both her eartags throughout most of her life.  Born in 2008 she got a secondary tag in her right ear because I hadn't been quite sure which of the heifers I was going to keep, at tagging time.  She lost the small button secondary tag sometime in the last few months, I think and today, I found her standing with nude ears!  She's easy to distinguish but she looks funny to me, without the eartag she's always worn.

Grey 607 still has her numbered right-ear tag, but she never got a secondary button tag, since I was never going to sell her.  It was 2010 when we started having to put NAIT tags into their right ears, so everyone got numbered tags in their left ears.  Previously the heifers had them in their right and the bulls and steers in their left. 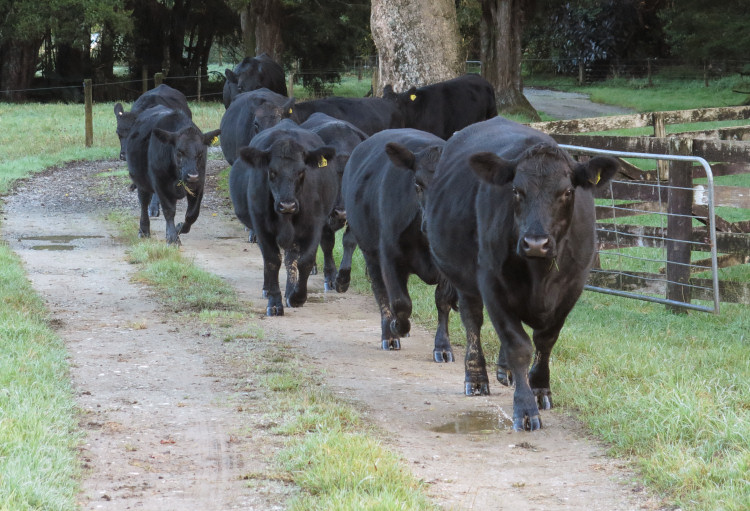 We brought the young mob in to the yards early this morning.  Heifer 793 is second, behind the big steer, 783.

Xavier, slaughterer, was going to be a bit late but had phoned to let me know, so when I calculated he was due to arrive, I went out and drafted the cattle so that there were no potentially confusing others with tags ending in 3 in the grassy yard with 793.  When Xavier arrived, he stopped his ute and shot her as she stood in the driveway.  Fast, clean, humane.

The other two heifers standing with her got a bit upset about her sudden drop but I moved them back away beyond this gateway again as Xavier got on with doing his job.

I had completely forgotten, in my own anxious state, to warn Sandi next door that there'd be a very loud shot nearby!  My anxiety is related to the fear that something will go awry and the animal will not be cleanly killed.  But Xavier's never done that here and does a quick and efficient job.  I have seen it happen though, and one hears such stories from others.  Once an animal is shot and down, she's no longer aware and the processing begins of what will become a lot of fine beef.  She had a very good layer of fat, evident under her skin in the last few months as she continued to eat as much as she needed and more.

I almost missed out on the suet, the fat around her kidneys, thinking it would go with the beef to the butcher; but Xavier had thrown it into the offal trailer just before I mentioned I wanted it.  I quickly grabbed it back out and put it in a container to bring back to the house. 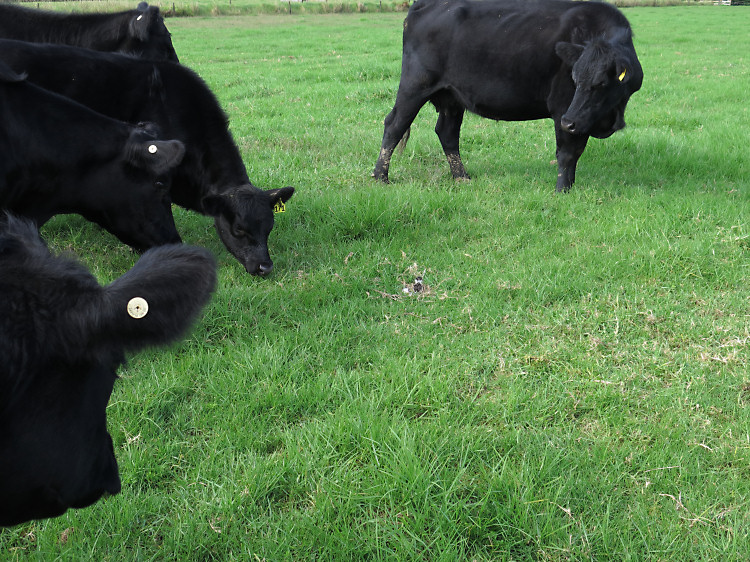 Early in the afternoon there was some upset bellowing and running about in Flat 2, so I hopped on the bike and sped over to see what was going on.

The cattle had found a Spur-winged Plover nest and were all gathering closely around it, sniffing and then shying back in alarm. 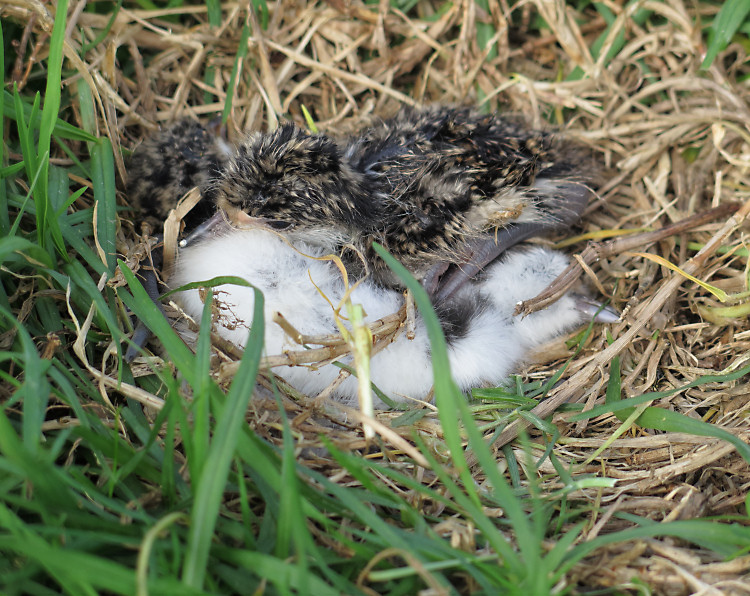 In the nest was what appeared to be a newly-hatched chick - although it may have been wet because some of the cattle had almost inhaled it while they were sniffing and testing it with the tips of their tongues - on top of its two dead siblings.  I could see no reason for their demise.  Perhaps they were injured by the cattle before I got there.

I removed the dead chicks and withdrew, hoping the live chick would survive this level of attention.  The parent birds were both remaining very close when I wasn't with the cattle. 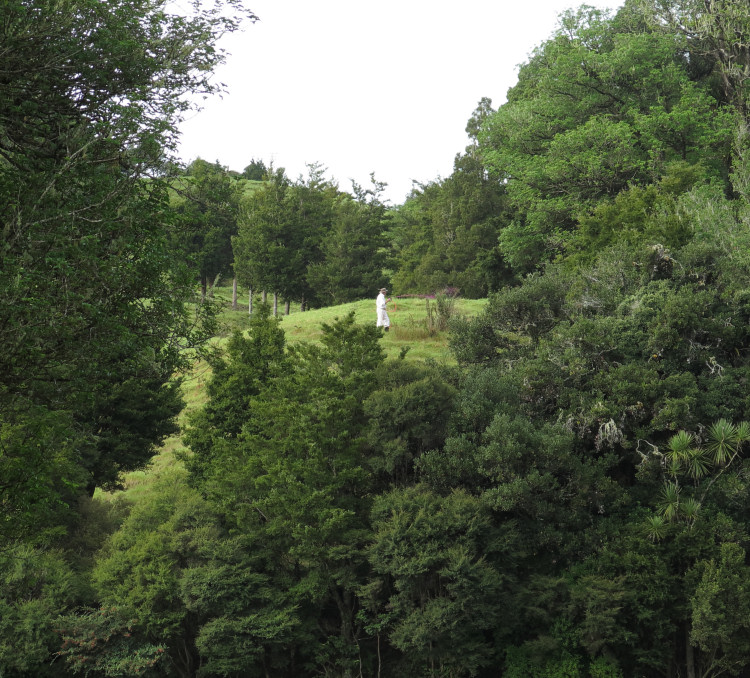 Stephan took the opportunity provided by some fine, still weather and went Over the Road to spray gorse. 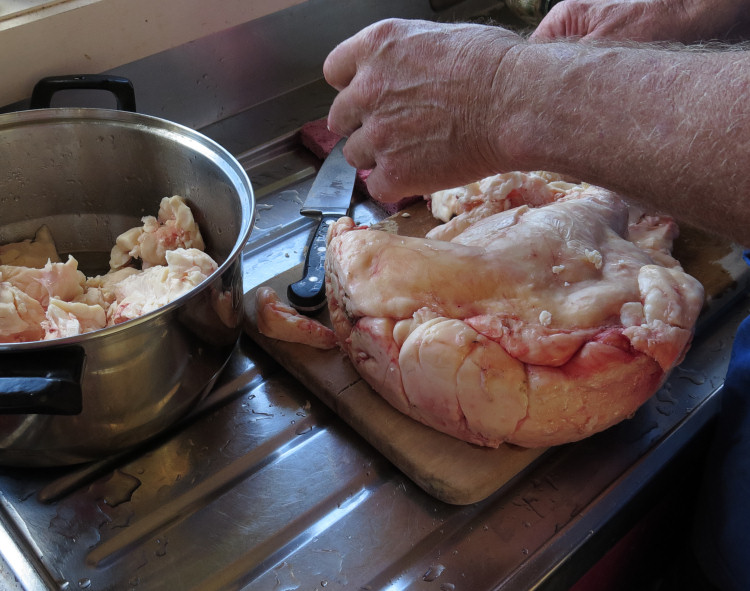 Later we got the suet out of the fridge for processing.  Stephan removed as much of the membranes as he could and chopped it roughly, weighing it into 500g lots that he then vacuum sealed in bags for freezing.  It will be used later in the year to make Christmas fruit mince and Christmas steamed puddings.  She was a fat heifer so there was quite a lot of lovely suet fat around her kidneys!

From what I have read, suet was used as a cheap source of fat when other types were unaffordable - butter and oils were probably not as available to people all through the year and suet seems to remain in usable condition for some time when kept cool.

Now we like to use it because it appears in the original recipes and it's fun to do things as they were once done. 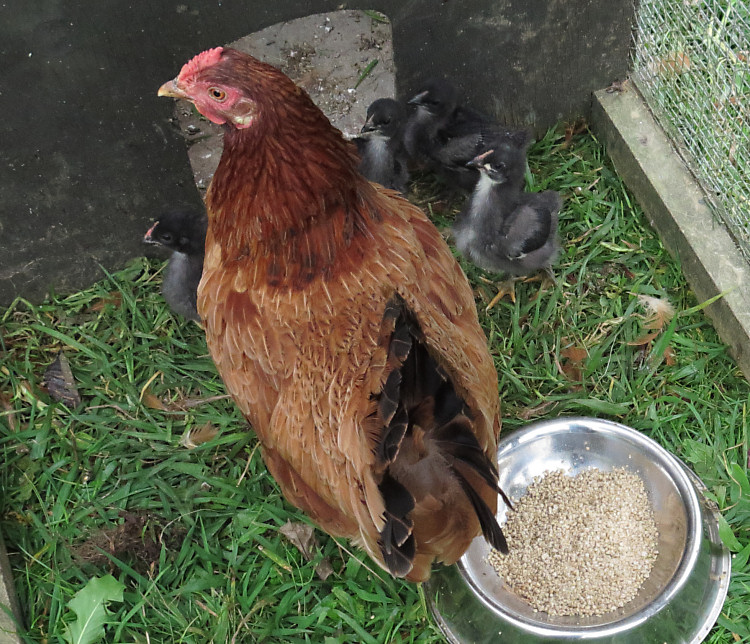 William came out to collect his hen and chicks, so I took a photo of them before they left.

It looks like he's doing better than we did with our four roosters!  There are probably two of each in this clutch.

The three of us sat and had coffee and chatted about nothing and everything and laughed a lot and William and Stephan threw terrible puns in wherever they could, as usual.

I spent the afternoon setting up my winter grazing spreadsheet, to help me manage the pastures through the cold months.