The second part of the week beginning the 12th of October 2019.
Tuesday the 15th 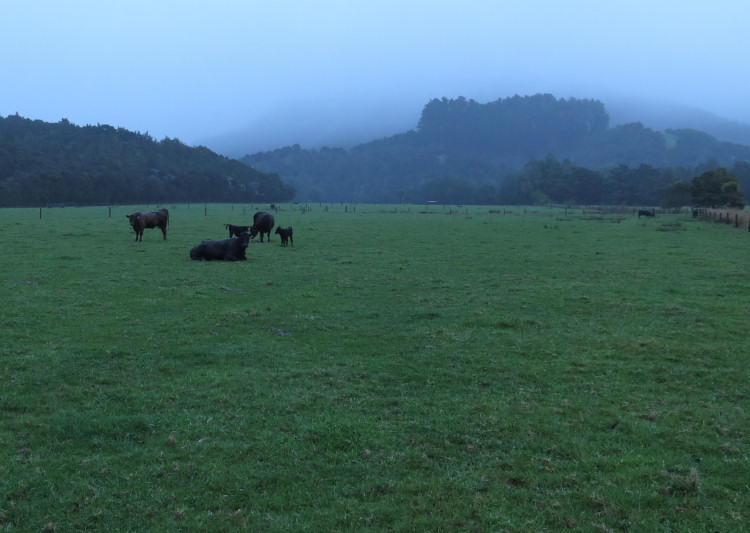 A wet, early morning check around the calving paddocks.

This was my second check this morning, the first having been at 4.35am. Yesterday morning I came out at 3.45.

When there are two-year-old heifers approaching calving, I check in the middle of the early hours, so that if anything is going awry, I can help resolve it as soon as possible. Most of the time nothing is happening and the only thing I observe is that cows stay sleeping in the same place they settle late at night, only standing to change the side upon which they are resting.

Up in the top corner of Flat 2, in a muddy little patch she'd created by turning in small circles, Imogen was cleaning her just-born third daughter.

The calf looked miserable and she didn't get up for ages. An hour or so later, I had to come back with an electric tape to exclude 811, who'd come up and attacked this calf when her own baby went too close. Imogen's calf did eventually get up and feed and I left them in a strip of the paddock on their own for a couple of days to settle down. 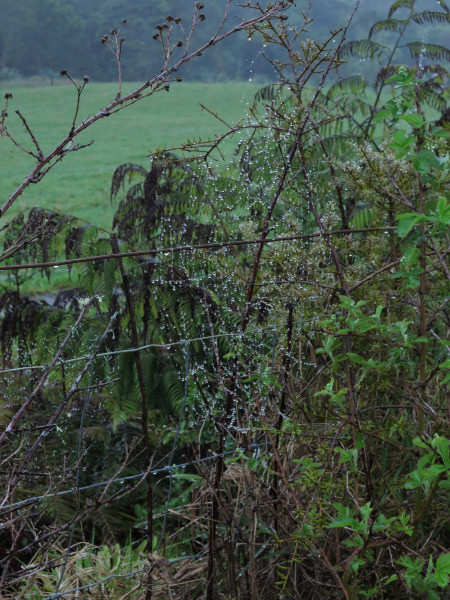 Rain drops in a spider web amongst the blackberry plants along the Flat 1 fence.

One has to appreciate the things one sees when obliged to be out in the wet and cold. 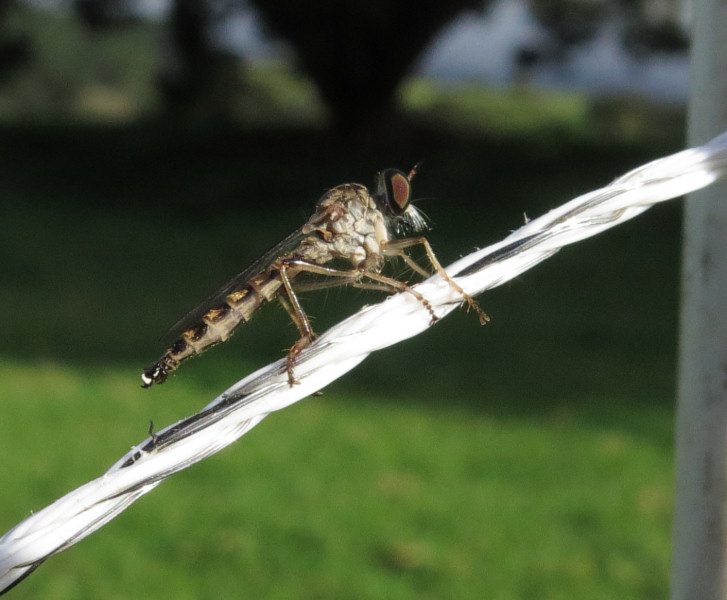 It didn't rain all day though, clearing in the afternoon.

Some of the cows are moving down the Windmill paddock from the top, as the heifers are moving up it from the bottom end. I'd let the cows go off into the Mushroom 1 to find some grass and while they weren't looking, moved the electric wire to provide another area of grazing here. This creature was sitting on the wire, so I took several hope-they're-in-focus photographs, to look at later and see who it was. 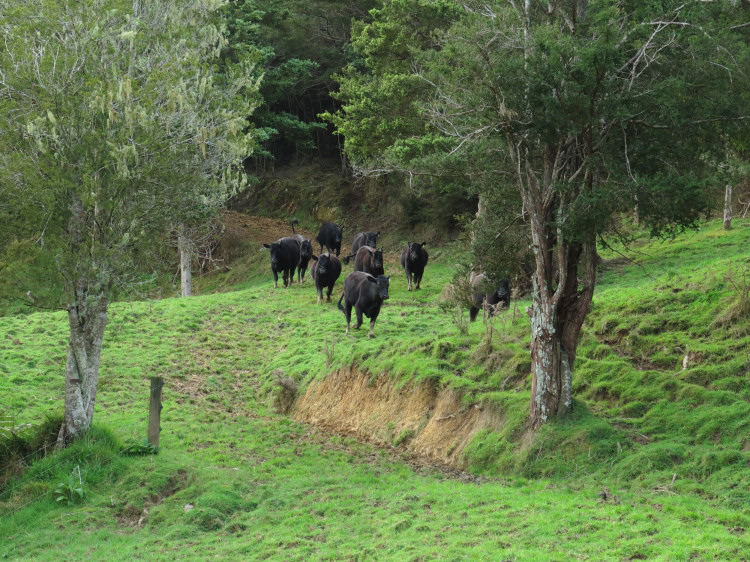 We went out to move the young mob, who came thundering down the track after Stephan had walked up to prompt their movement.

Jet was in labour at dusk and being harassed by the difficult 813 again, so I provided some separation: the others had found the new grass in the Windmill and when Jet went off back to Mushroom 1, I simply shut the gate. Just after 11pm she delivered a daughter in a cold, wet Southerly wind.

723 looked like she was in labour earlier too, but with no definite change by the time Jet was finished, I left her to it and went home.

We kept the first of Zella's milk this evening, so cheese and butter making will soon begin. Frozen milk has proven very satisfactory, but fresh milk is always the best. We've perfected our winter milk storage system so that we have ample milk while Zella is not milking and it's still vastly nicer when thawed, than the commercial milk we would otherwise have to buy.

Up and out again at 3.40am and there were two new calves in Flat 1; one born to 710, who was already sitting quietly, probably having fed, and the other to 775, who had only just delivered hers and was cleaning her as I passed the paddock.

In the Windmill, 723 was calling loudly through the fence to Jet's calf, now obviously in labour. I was a bit surprised not to see her already delivered of her calf but checked my notes again and realised that her progress was not unusual.

Shining my torch into Flat 1 again on my way past, I could see 775's calf was on her feet.

I went home to warm up and the next time I checked, around 7-ish, Grey 607 had produced a calf as well. 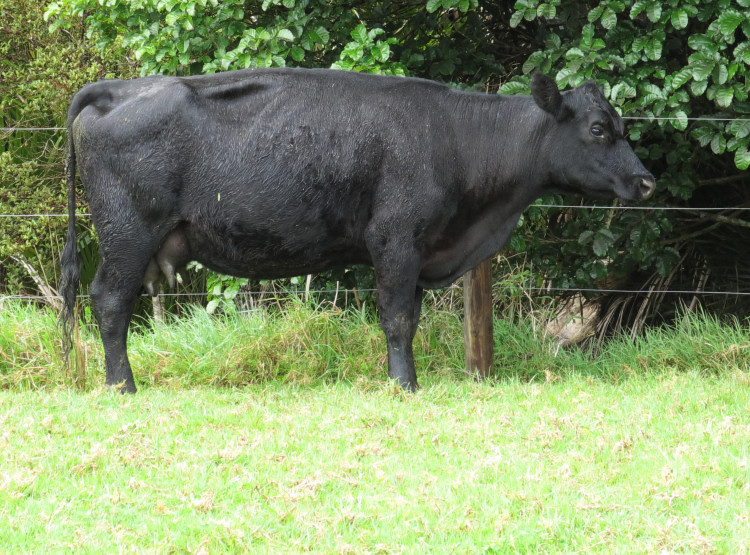 775 is a thin cow by nature, it would seem, having still not really solidified, despite now being five years old. This morning she provides an extreme example of the way a cow's pelvis rearranges itself for birth: within a few hours the hollows on either side of her tail will disappear again, as her ligaments return to a more ordinary state. I will try to remember to get a picture of her again later in the same pose, to show the difference.

Her calf was just through the fence on the stream bank. 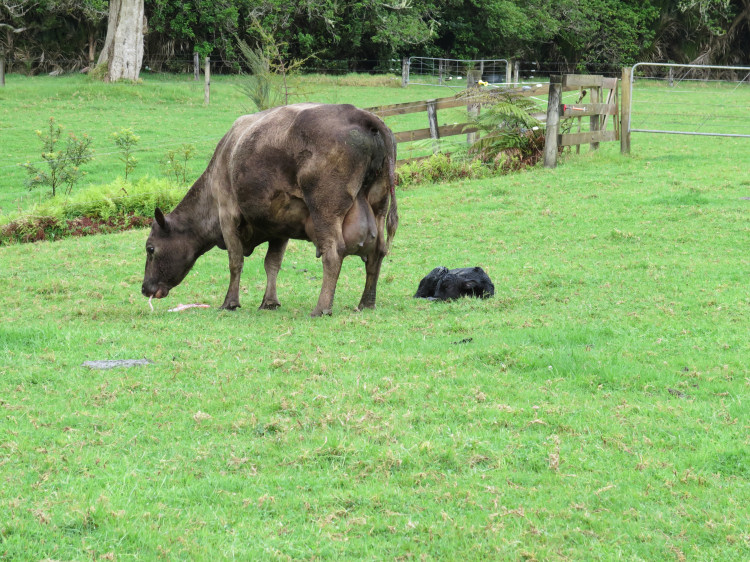 By 9.30 607 had delivered her afterbirth and was eating it. She didn't finish it, so I had to go and remove it later to stop the hawks upsetting the cows when they came to eat it.

Some of the cows eat everything, others don't touch it and some get part-way through and give up or get distracted by other things.  I usually note what they do and will one day collate those notes and see where the commonalities lie. 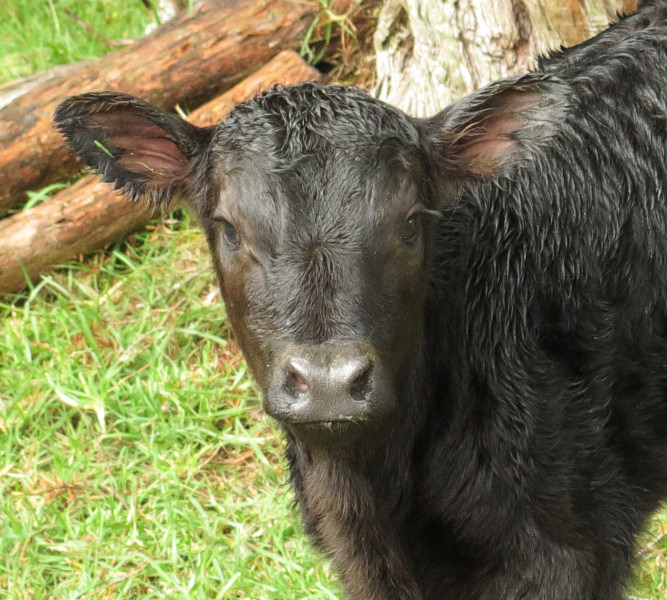 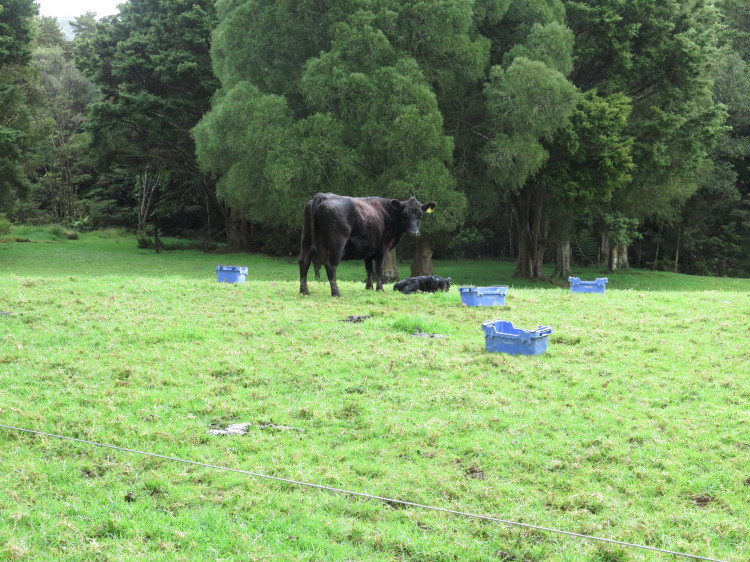 723's calf was snoozing after her first feed.

723 has had three of her six calves up this end of the Windmill paddock.

I seem to have deleted 24 hours of photos from 2pm today. I'm generally extremely careful but tiredness must have addled my memory and I thought I'd downloaded photos I had not. Words will have to do.

In the afternoon as I watched 613 in labour in Flat 2, Brian was here with Stephan, to provide a helpful extra set of eyes on the new cattle crush, as Stephan lifted it with the digger and gradually moved it into place on the new concrete pad. It looked precarious at times and I took lots of nervous pictures. But it all went well and the crush now sits almost exactly where it will be permanently bolted down.

613 procuded a son, the only calf we'll have from bull 178 this season. 178 was with the cull cows, amongst whom 613 was included, until I changed my mind in her favour before the others went to the works.

I was also watching Zoom, who was in early labour and later, as darkness fell, I watched from a little distance as she produced a couple of feet and once the nose was coming, I went and helped a bit.

After some loud mooing at this strange creature she discovered on the ground behind her, she settled down very quickly. I've noticed before that the two-year-old first time mothers are much calmer about their new experience than many of the three-year-olds.

Out checking at 10pm, I found she'd fed her calf and was mmmm-ing to him quietly in the shelter of the blackberry bushes. I also heard a kiwi calling, a little further up the valley!

Last year when we bought the weighing load-bars to go with the new cattle crush, I had an email from the sales rep. offering to come and help us put them in. I emailed him last week, once the concrete was laid, and asked if he'd still like to come and help, despite our year-long delay? This morning he arrived and he and Stephan worked to lift and lever and nudge the crush into the right position once the load bars were bolted on underneath, before drilling holes in the concrete and bolting the lot down permanently. We're on the way, at last.

I received an email from my contact at TBFree, with the good news that nothing untoward was found in the body of the possum I submitted for checking after we found it sick in the Spring paddock. I haven't seen any more wandering around looking like they're dying but I also haven't been out the back much, my attention being very much on my midwifery duties on the flats. 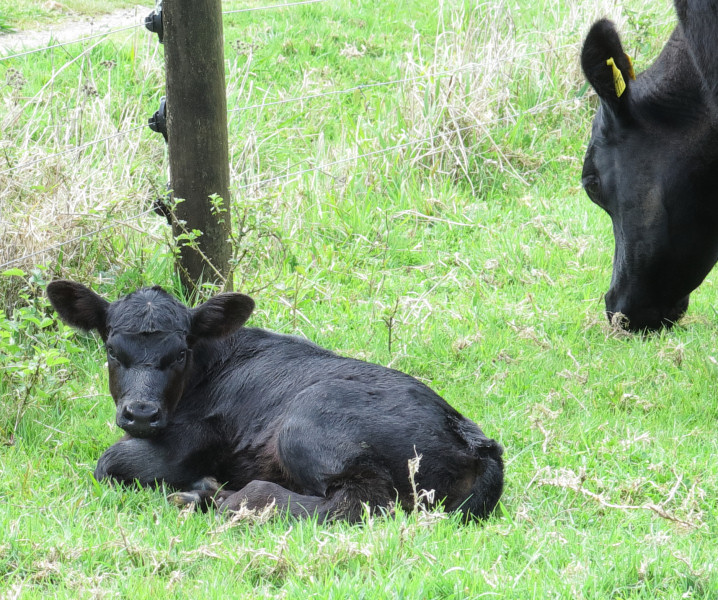 Calves are so pretty. This is 775's daughter. 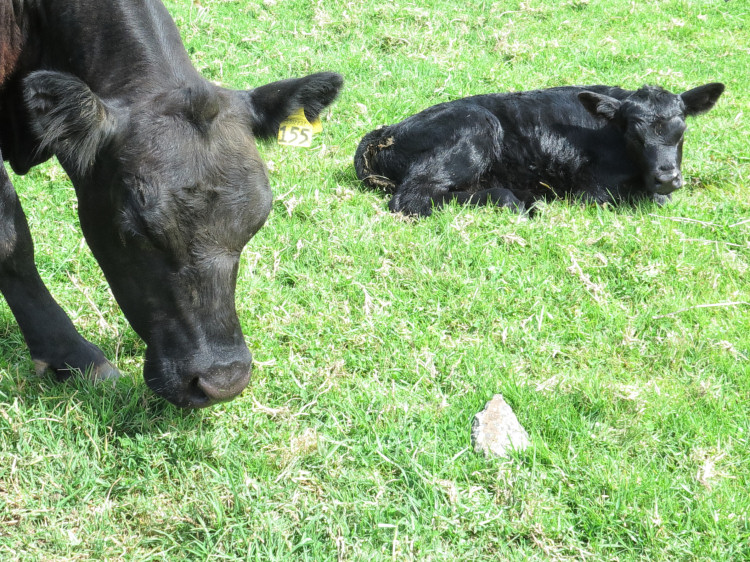 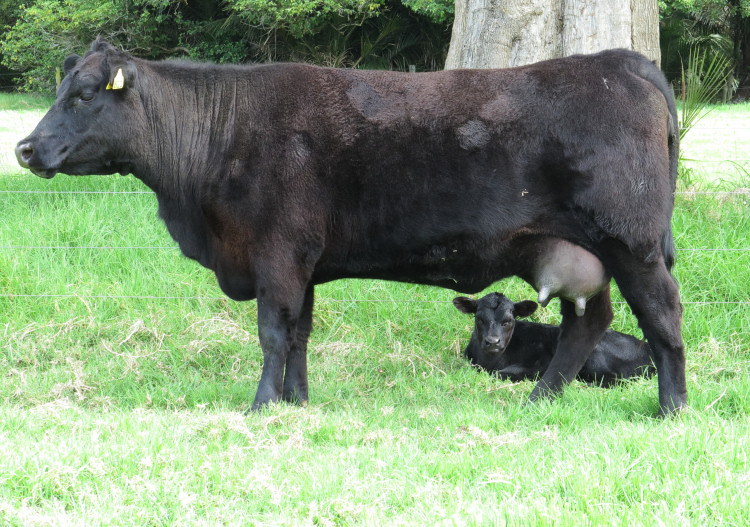 811 is being a very attentive mother to her son. 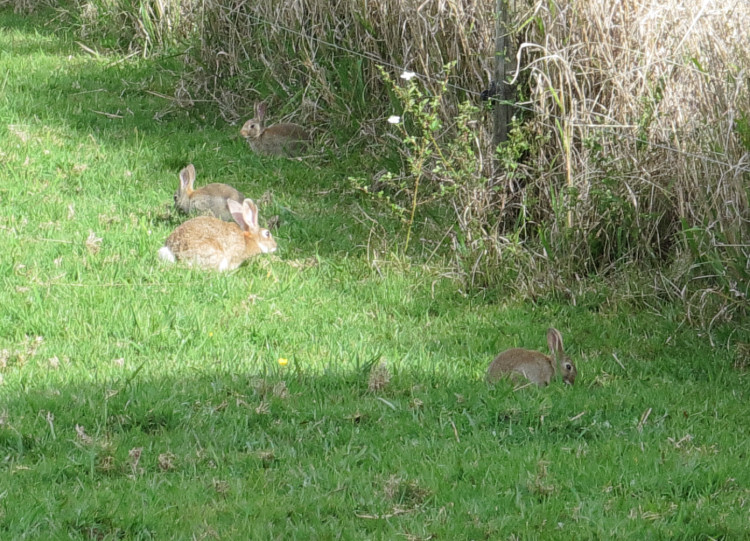 We are being over-run by rabbits this spring. It happens in dry years, when rabbits can safely deliver their babies in their burrows and not have them drowned by the rain. 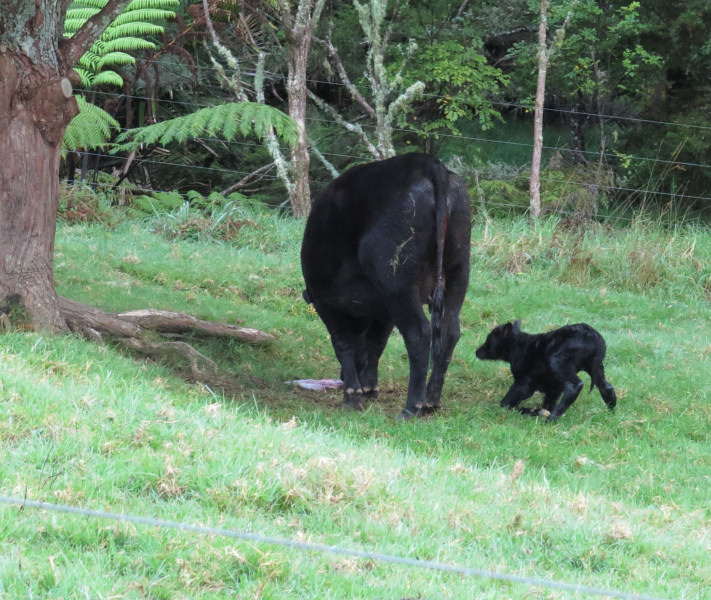 I checked on Ellie 171 at 3am and she looked quite normal. When I came out again at ten to seven this morning, she was lying down delivering her afterbirth, with her little heifer calf sitting quietly beside her. Nice.

Later on the calf changed sex. Funny how that happens. I thought I'd earlier seen the characteristic vulval hair that's often much easier to spot than a tiny scrotum but it turned out I'd been mistaken. 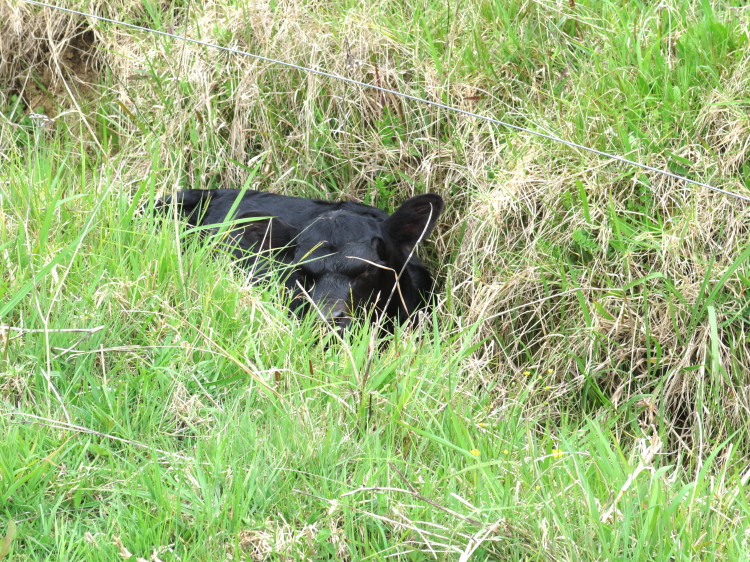 This is Zoom's calf, tucked away in the drain at the bottom of the Windmill. Zoom is completely relaxed about her calf, grazing some distance from his sleeping-in place, unperturbed by our proximity to her baby. Her behaviour is extraordinary and makes life easy for me, since she's not frantically chasing her calf around whenever he moves. 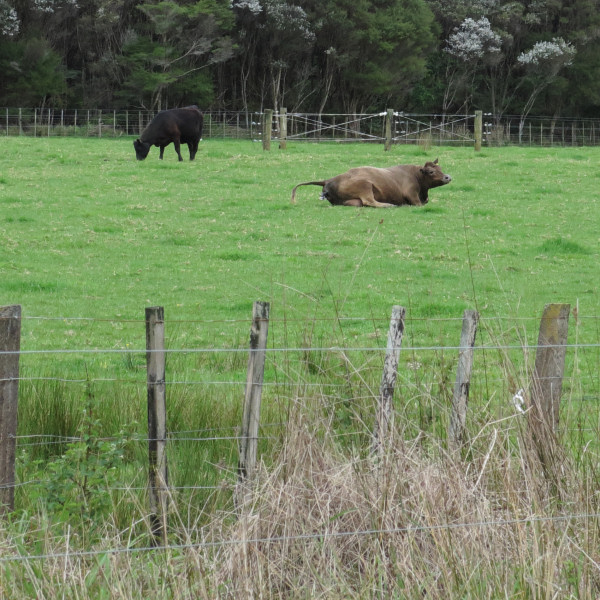 Raewyn came out for a visit this morning, when I'd been watching both Endberly (in Flat 1) and Glia (in 5a) in early labour. Poor Endberly was very upset about some Myna birds and kept running at them to chase them away.

When I saw that Glia had produced the membrane bag around the calf, we walked out to watch her.

She took about half an hour to produce a dark calf whose lighter colouring around the eyes made me suspect he was a fuzzy-haired baby. 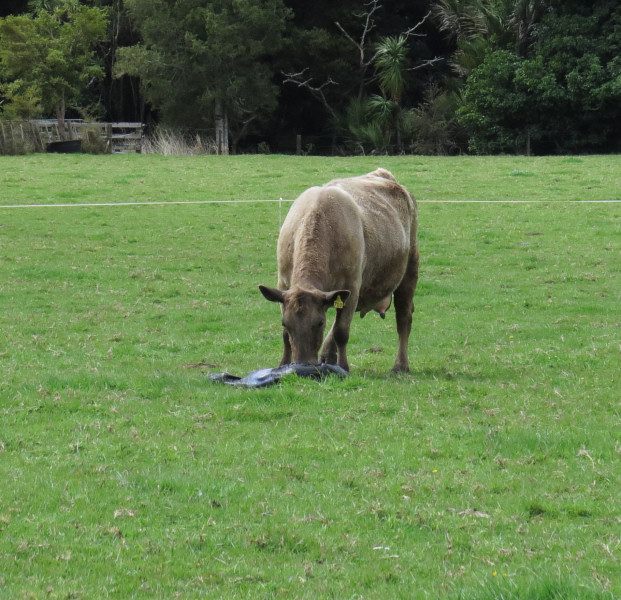 Endberly produced her calf within the next half hour as well and seeing Glia's calf was now up on his feet, we walked back to the house.

Endberly's calf is a bull, with straight black hair. 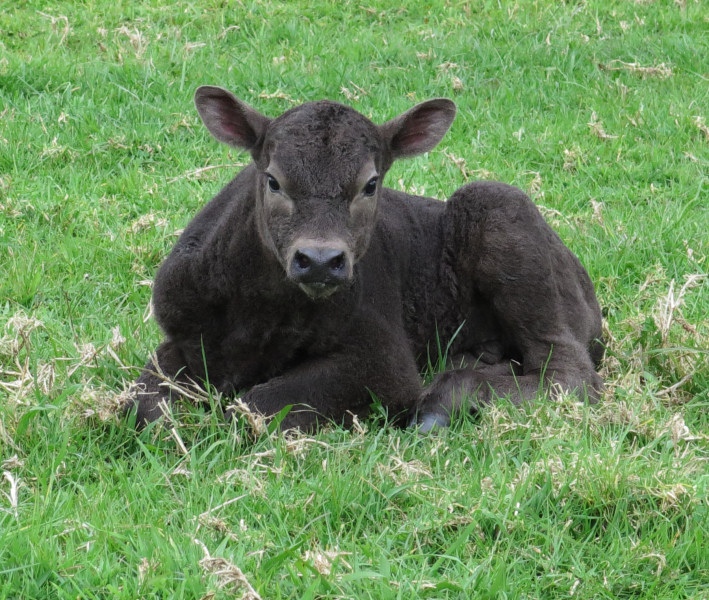 Glia's son, with the short, fuzzy, charcoal coat of Hypotrichosis, the (unimportant) genetic condition Glia and the other grey cows carry.

The "coloured" cattle are always the fun ones to watch, waiting to see if their calves will be black, or coloured like their mothers, having a 50/50 chance either way. 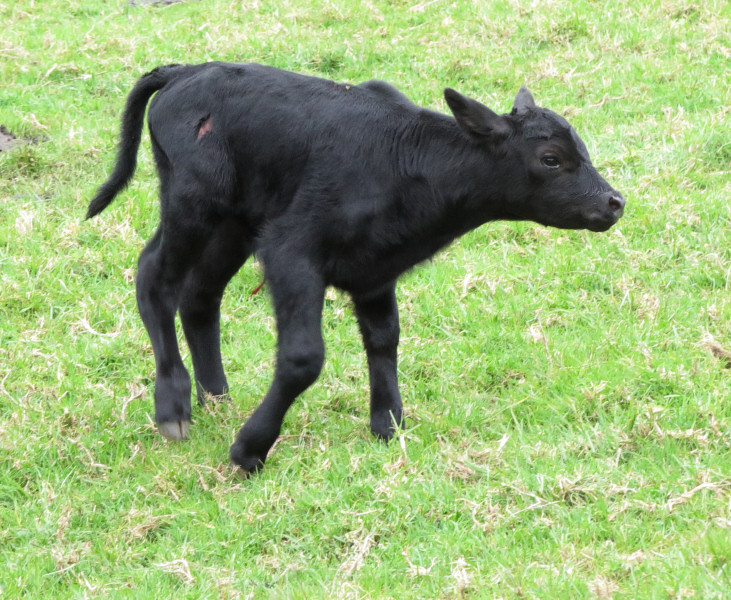 Heifer 171's calf has a nasty scrape on his right thigh. It doesn't look bad enough to need to do anything about him but I bet it stung! His position in the picture is only odd because he was halfway through turning away from me. 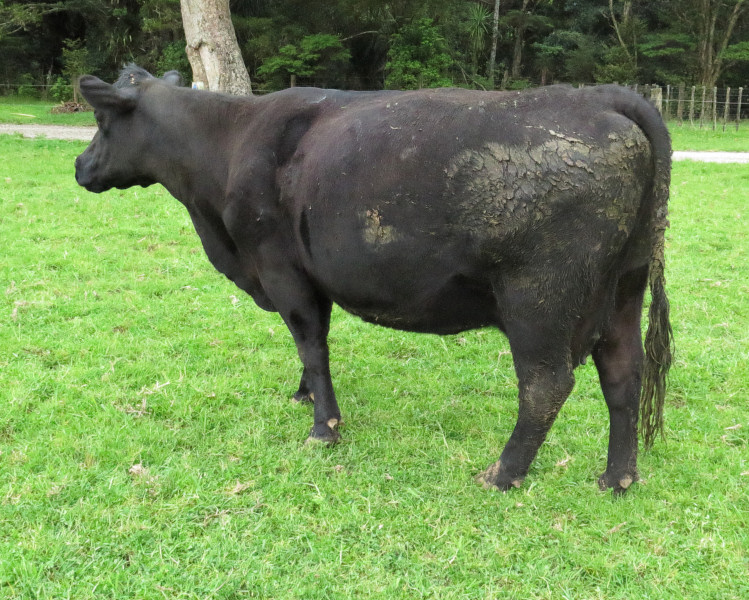 Eva, in a disgusting state, not fit for appearance as the star of the annual competition. I will have to tidy her up. 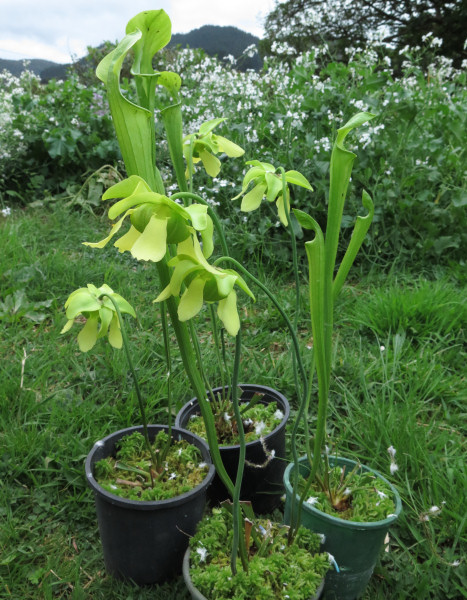 Here's a better picture of the fascinating pitcher plants, outside the aviary so that the budgies wouldn't spoil them when I had them all flying free in the work-room during feeding.

When the flowers were first coming up, three of them were cut down by budgies biting their stems when I wasn't looking.