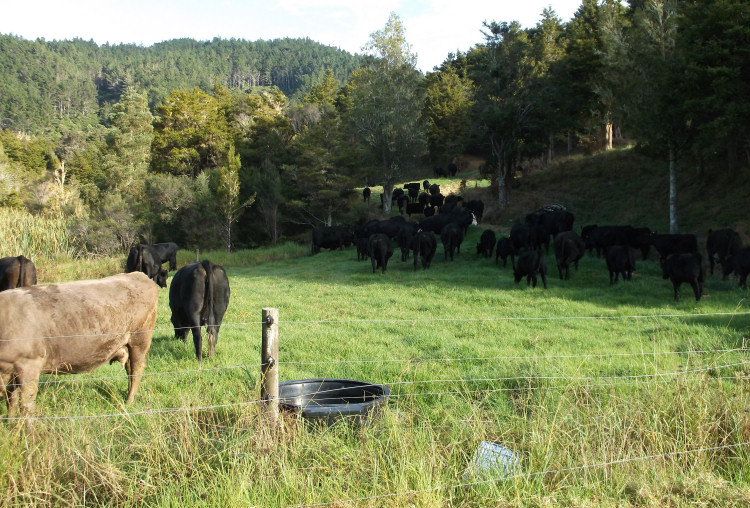 At home life went on as usual, Stephan checked on the cows and calves as he moved them from paddock to paddock.

I remained where I was, happy to be in a bed whose shape I could change by pressing some buttons, so I didn't have to exert any effort to move myself into comfortable positions.

I had a distressing night and when a young doctor arrived to check on me in the morning, we went away to a private room for a chat and decided I could be discharged this morning.  The nursing staff in their busyness, had kept failing to turn up with my medications at the times they were supposed to be delivered and so my pain was not well controlled.  Pain spiralled me into some sort of panic and I really needed a Stephan, who knows where this all comes from in my lifestory, rather than a nurse who, in the midst of a fit of inconsolable weeping in the early hours, offered me only another pill and a painful injection to protect from blood clots.  There was not even a hand on my shoulder.

There were some tremendous nurses but also some who must have exhausted their compassion and empathy, who had forgotten that essential part of supporting the healing of their patients!

As early as I thought forgivable, I rang Gaye, who had offered to bring me home in her comfortable car, to ask if she could come down this morning to collect me.

When the human bowel is interfered with by surgery in its vicinity, it apparently stops working properly.  I was given a medication that should have kick-started things during the morning.  I waited the two hours of Gaye's journey down, for something to happen but eventually we gave up waiting and came home.  The medication fortunately didn't start working during the journey either.

At home I settled in to my lovely recovery bed, set up before I left with new sheets and an enormous pile of pillows to arrange however I needed them.  I'd also bought a clamp thing with a flexible arm, to hold my ipad when I lay down and a switched power board to hold the plugs for charging devices and even the beside light, so I wouldn't have to lean very far to turn it on or off.

Sandi and Gary had brought a big bag of pre-read "women's magazines", those ridiculously pointless, rubbishy reads one can sometimes find comforting when distraction is welcome and concentration is absent.  The Tramadol was making my brain so boggy I couldn't read or do anything meaningful. 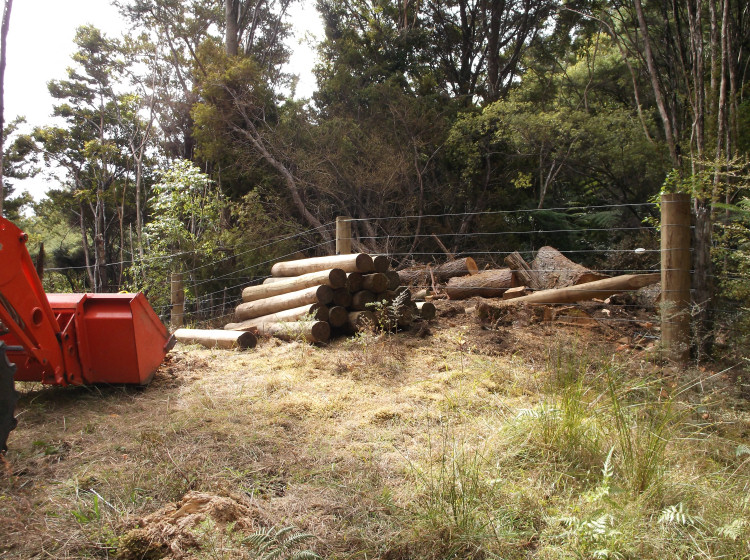 I could get out of bed and fetch things I didn't have beside me so encouraged Stephan to go off and get on with his own work for a while.

He took a load of fence posts to the top of the hill in preparation for the next section of the boundary.

They won't be used for some time, since the fenceline requires significant clearing work first but we never know when the weather will become wet and the ground will be too slippery to get up here with the tractor.  It's good to get the heavy materials to the top of the hill before that happens.

Lovely people visited me for short periods, bringing fruit and flowers and distraction; others phoned and talked for a while.

That medicine the hospital gave me on Sunday still hadn't worked so we went to the doctor, who gave me something else whose effect was eventually better.  Jane lent us her car, since the ute's suspension is so hard and Diggers Valley Road is always (these days) in such an appallingly bumpy state. 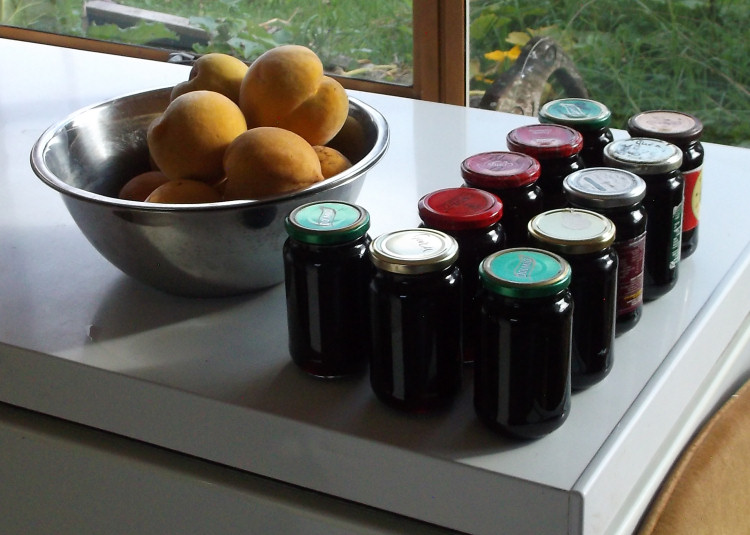 Stephan spent the day in the kitchen turning fruit into preserved foods.

Here is a batch of guava jelly, which I particularly enjoy on toast, along with some fabulous peaches from our Golden Queen tree.  They are delicious cooked and bottled, and we only ate the last of last year's preserved harvest in the last few days. 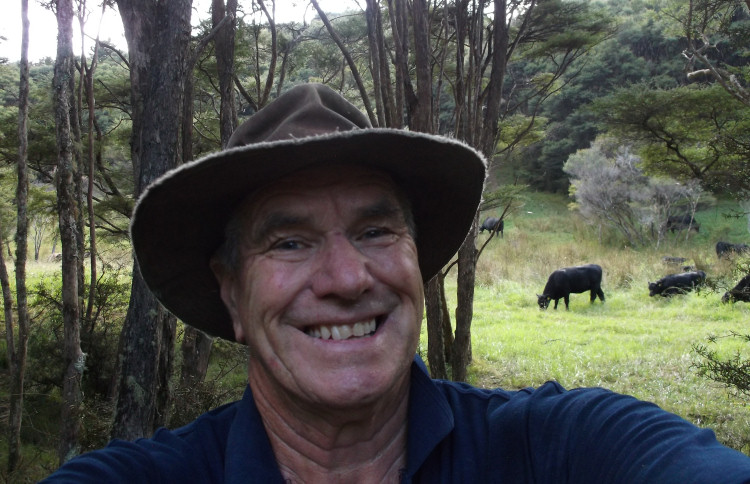 Stephan took his camera with him again, to bring back pictures of my happy cows and here, the happy farmer.

They've gone into the Swamp East (left side) for the first time since the fence has been replaced, so there was lots of grass.

Stephan had run a couple of tapes up the sides of the main gully, which is probably how we'll end up permanently fencing the paddock.  The culverts we put in alongside the stream fence have repeatedly blocked and we now think we might remove them again, abandon the idea of having an access-way between the two parts of the Swamp East.  It's easy enough to rotate the cattle through the Blackberry, into here, out to the Frog and then around to the other end of the SE.  A lane across the Frog paddock can be fairly easily created with tapes, should direct access be necessary.

These are the fruit from a little self-sown peach tree by the pigsty.  They'll be cooked and bottled for our enjoyment through the winter. 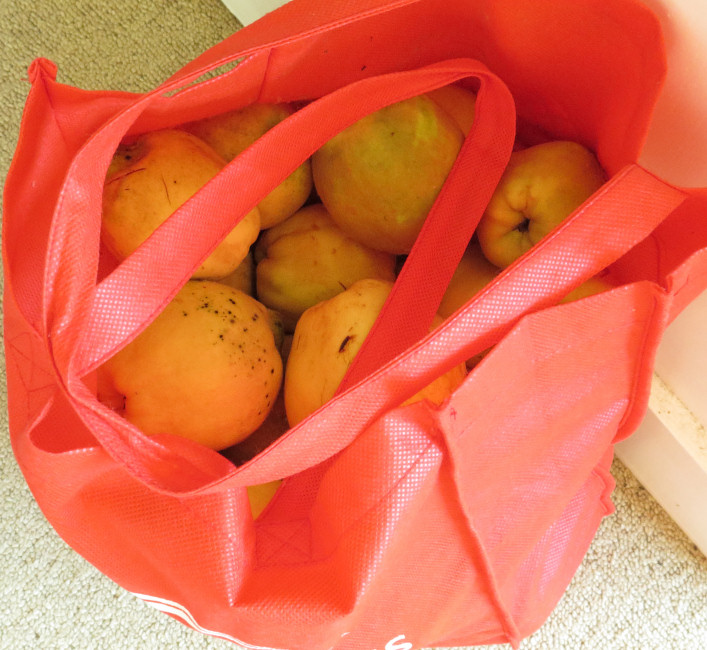 Some of the quinces, for making into jelly, for a change from guava and blackberry jellies.  They're all quite different from each other and I can never decide which is my favourite. 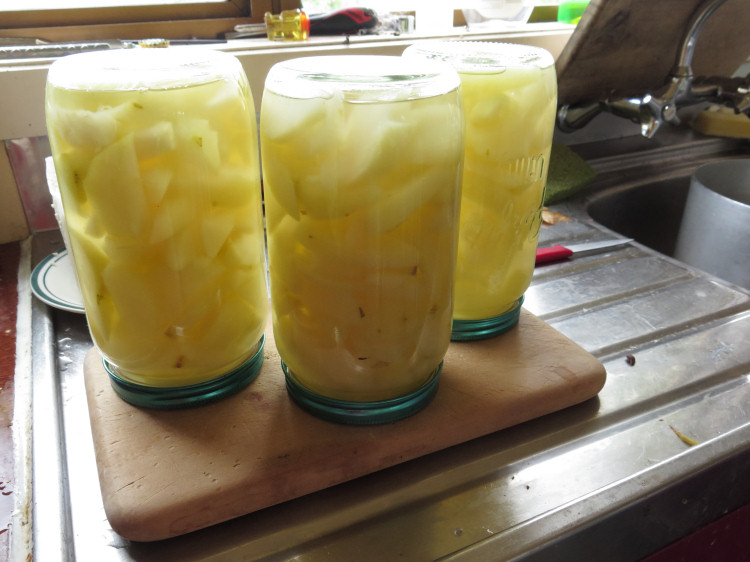 The orchard has had a hard time this season, we think from Pukeko.  Big branches were broken from the trees but their fruit was left uneaten, which suggests the culprits were too-heavy perching birds, rather than possums.  Stephan was reasonably onto the trapping of possums in and around the orchard and there weren't very many there.

Thus the fruit harvest was not great.  There were only sufficient pears for these three bottles.  There are a few more apples but they too have suffered from a bit of tree-battering. 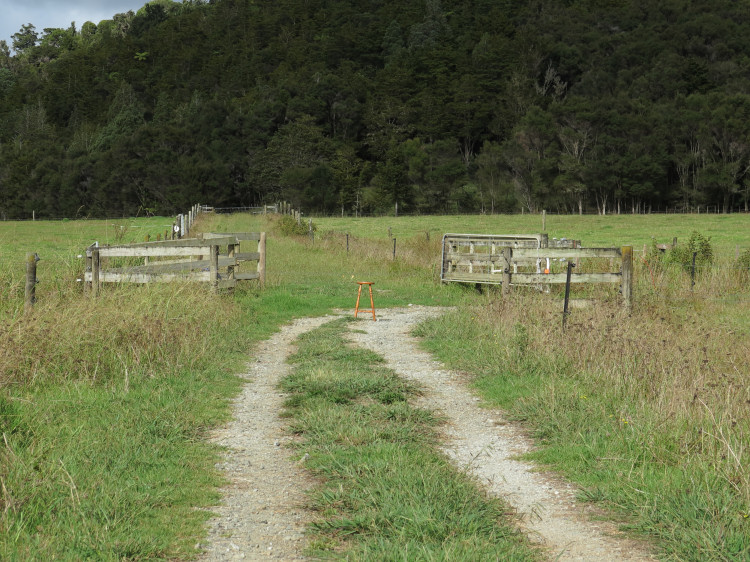 Post-surgery walking is encouraged and I've been going a little further each day along the tracks.

This morning Stephan went out to move the cows to Flat 3 and on his way dropped a stool on the track so I could walk to it and sit to watch the cows go past. 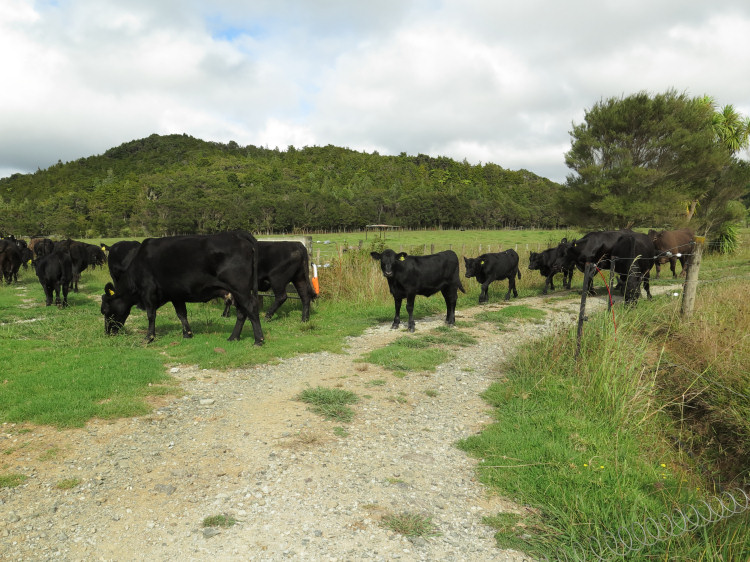 Lovely animals.  I miss them when I can't walk amongst them. 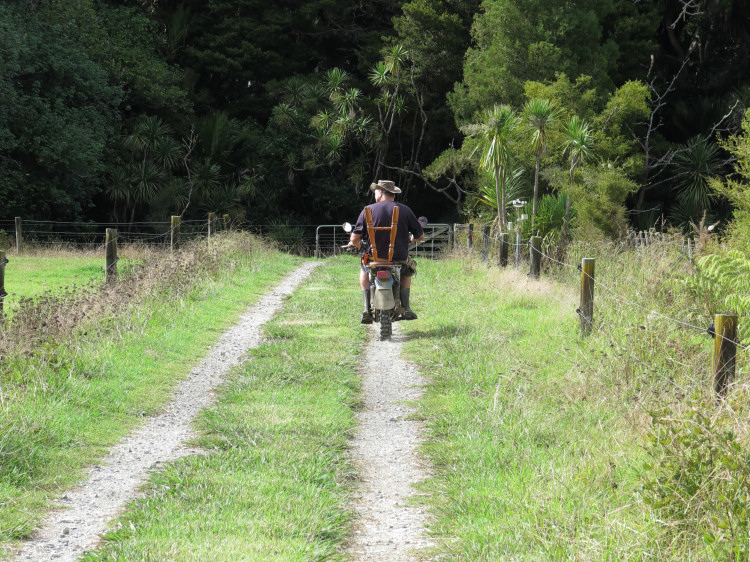 Then he took the stool home again while I walked back in the sunshine.

Now that Stephan "owns" this bike, I think we'll have to revisit the helmet issue.  We bought him a quad-bike helmet (specifically designed for rural use at lower-than-road-speeds), but his head is large and the helmet's adjustable fittings were not quite loose enough at their full extent.  I've since taken over that helmet, since I no longer require the noise-reduction of the full motorbike helmet's ear covering, with my near-silent bike.  Surely there must be something suitable for the larger noggin: it would be awful if he fell off and a helmet would have saved him from a head injury.