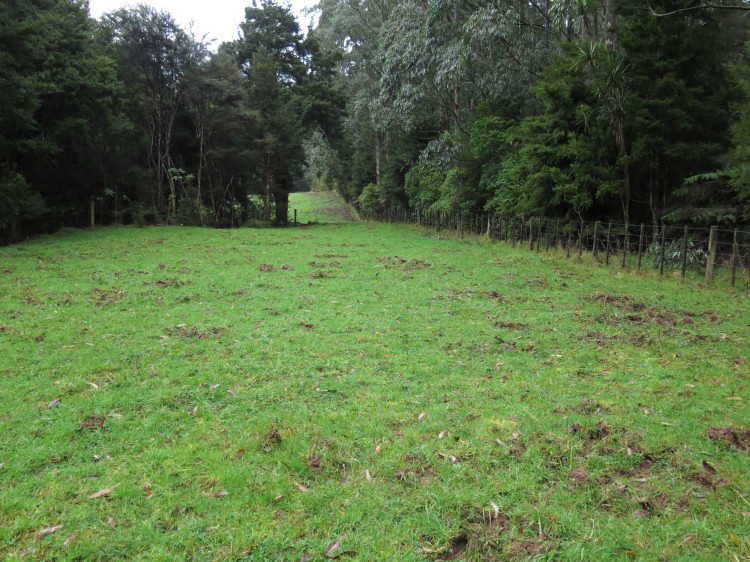 Out early this morning to shift the young mob.  I wanted them to graze the Back Barn and Swamp for 24 hours, on their way to the Spring.

This is feral pig damage.  It is frustrating to lose so much grass and growing area. 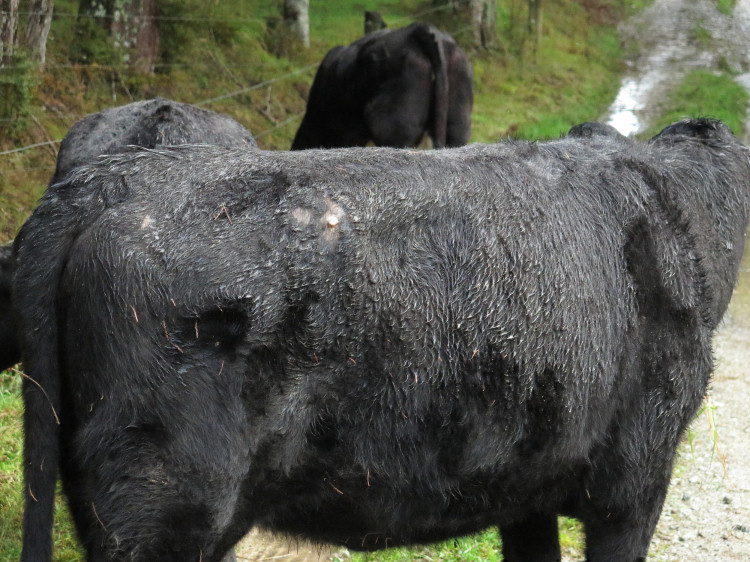 Spot was on heat last week and this hair loss and skin damage is evidence of how actively she was mounted by others in the mob.  The adult cows often lose hair over the pin bones and tail head but Spot's major rubbing was over her right hip. 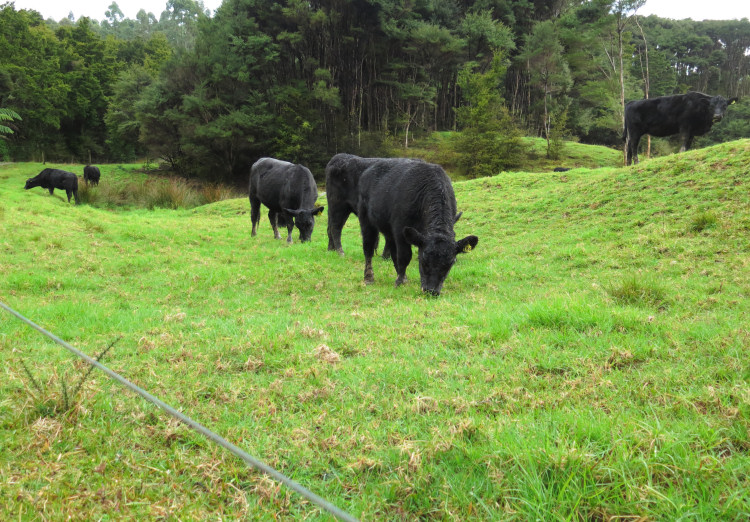 I sent them along to the gateway into the Swamp paddock, where there were immediately very satisfied scrunching noises as the animals got stuck in to the fresh grass there. 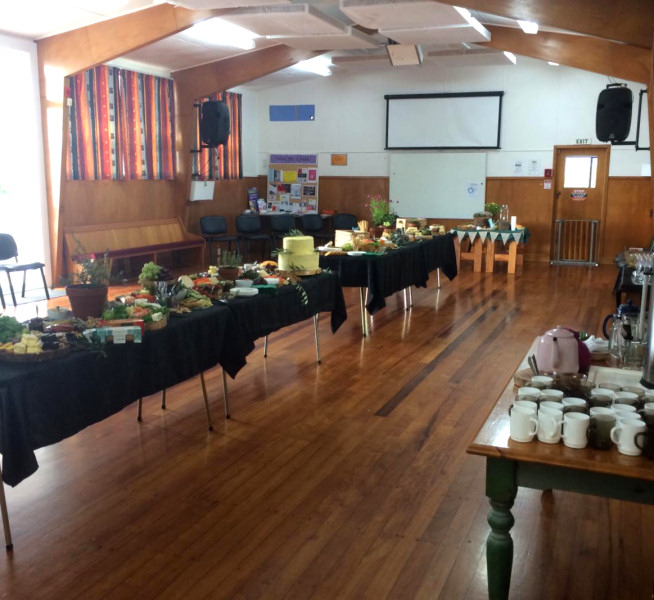 To the Church part of the wedding of Miriam and Roy at noon today, and here was the hall, ready for the feast after the ceremony, all set up before we arrived.

It all went off beautifully. 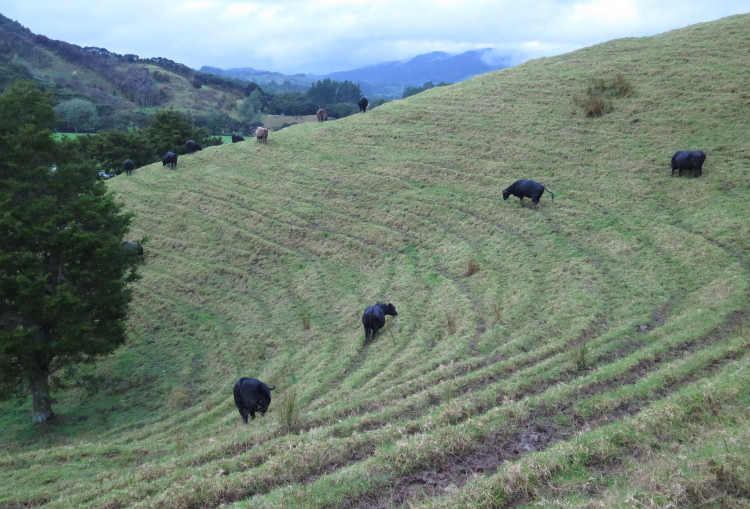 Later at home I needed to move animals around so they'd be in places with sufficient grass for a couple of days while we're not here.

I followed the fresh prints of the cows' hooves around the slope and over the hill to the smaller part of Over the Road where they've been grazing for a few days and counted them all present.  On my way back I left the gates open to the larger portion of the hillside paddock, so they will be happy while we're away. 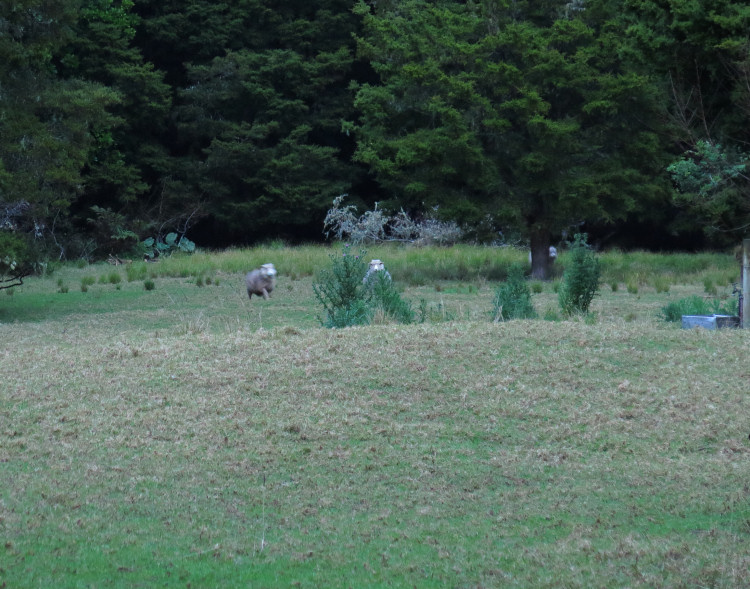 Rain is forecast and so we called the sheep out of their usual, sometimes flood-prone, grazing area and put them in the House paddock, just in case.

After moving the young mob early this morning, we drove to Whangarei in the rain.

Today's part of the wedding celebration had been organised by Roy's parents and involved some formal Tamil celebrations before an excellent feast and all the usually-expected speeches and congratulations. 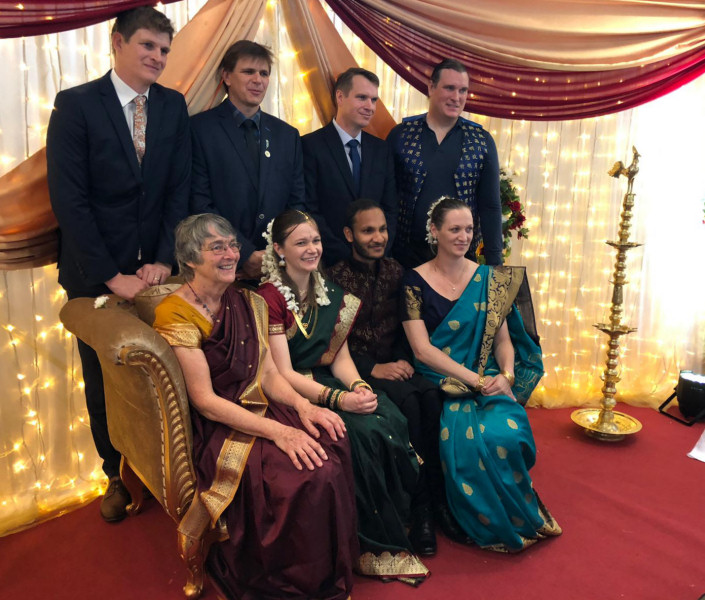 It was an extremely colourful event, nearly all the women of Roy's family being decked out in beautiful saris and jewellery and many of the men wearing similarly festive attire.  Some of Miriam's family were lent saris and dressed by their new relations for the occasion.

The tall lamp had been ceremonially lit by the couple at the beginning of the afternoon.

At the end of the event Stephan and I drove half an hour north to visit Kate and Geoff near Helena Bay, for a couple of nights "holiday".  Their place has become our favourite mini-break destination, being such a very comfortable place to stay, with excellent company in residence.

We arrived home at three o-clock, relieved to find that the bridge was still covered in the usual debris (bits of mud and stone, pieces of fallen tree and leaves), rather than washed clean by the huge flood I'd felt sure must have eventuated during Monday night.  The rain radar showed a rain system stalled for several hours over us and the rain at Kate and Geoff's sounded unrelenting.  But there was less than 18mm in the rain gauge and all was well. 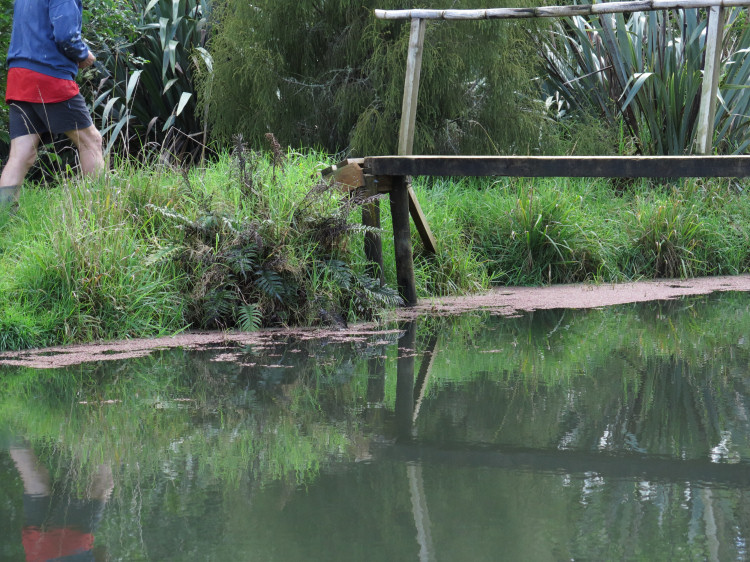 While I kept the camera trained on the pond, Stephan walked around to where the Scaup had emerged on several occasions lately, in case she's in the grass somewhere, nesting. 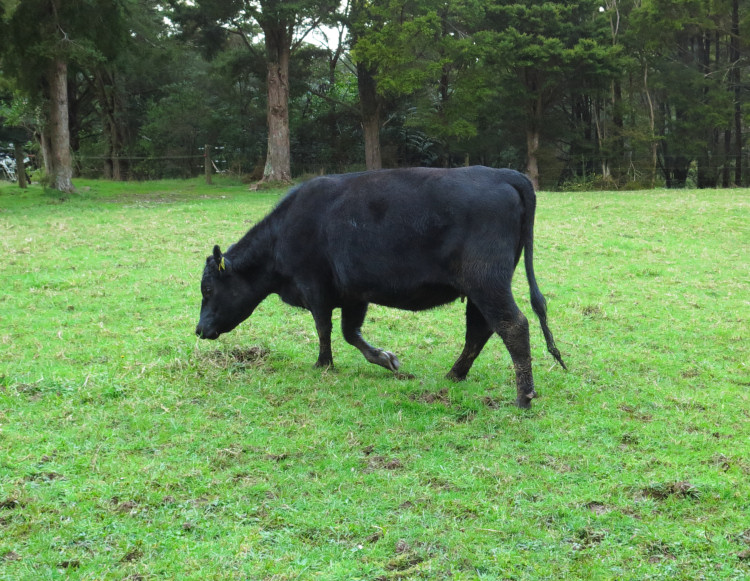 Zoom is looking good, nicely covered, still growing steadily, as is the baby she carries.  She's due on or around 21 October.

Zoom and friends were on their way from the Spring paddock, all the way around to the Big Back North on the other side of the central hill. 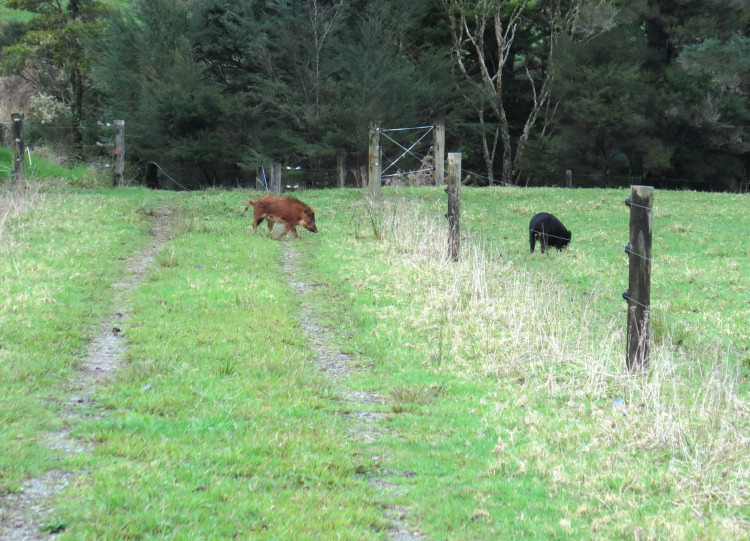 I had to mess around with the water supply to the trough for the heifers and when I returned to shut them in their paddock fifty minutes later, I found some other livestock using the lane.

Feral pigs are funny when they get a fright, galloping off with their weird, short little legs, grunting with every bound.

Hopefully next time I see them I'll have a rifle - or better, next time I'm out here with the rifle, I see them! 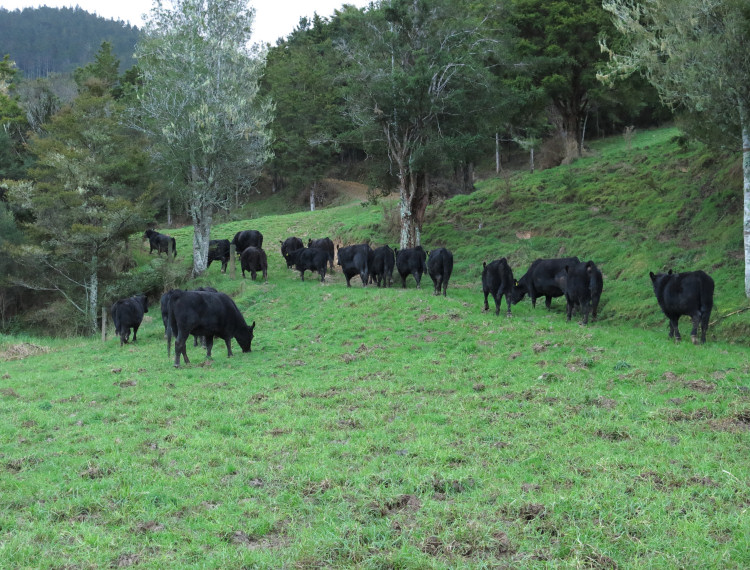 The heifers all stood around at the bottom of the hill for a while but eventually realised that this was it, their grazing for the next day or two.

There's not a lot of grass around as is usual for August, but it is growing more than most years. 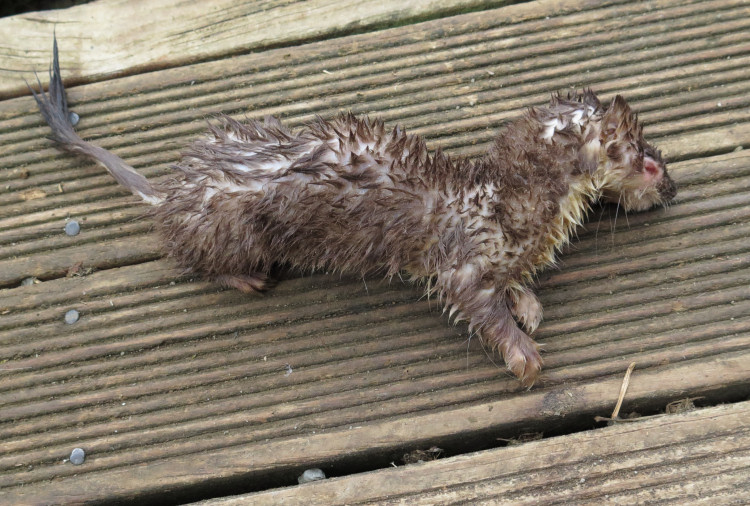 It rained all day yesterday and last night was miserable.  This stoat went into and tripped the magpie trap at some time and appears to have died from the wet cold.  Stoats must be quite fragile, despite being one of the worst introduced predators in our environment.

The heavy rain stopped mid-afternoon but I didn't go out until about 5pm, remarking to myself how light it still was, and that venturing out this late was no longer idiotic as there was now still an hour and a half before dark.  At this time of year, day length changes very quickly. 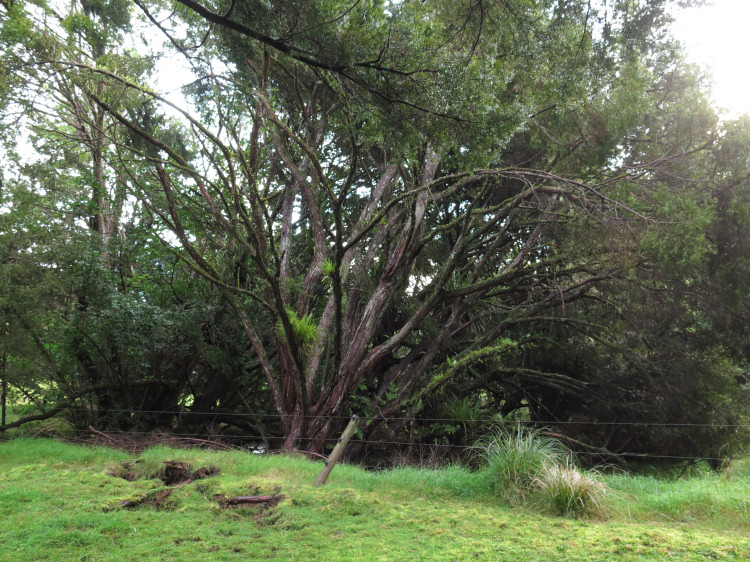 Here is the big toppling Tōtara at the top of the Windmill paddock, falling over more and more, taking part of the paddock with it as well as the fence post.  Stephan will have to come out and change the fence.

There's nothing to be done about the tree at this stage.  We will wait and see how far over it goes and then consider whether some of its branches need to be cut out of the flow of the stream. 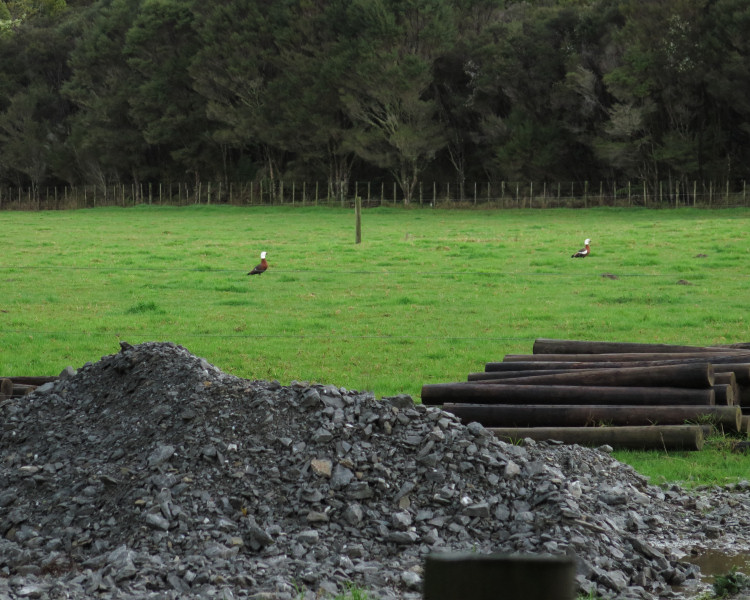 As I walked back to the bike, these two female Pūtangitangi were chorusing their alarm.  They stayed where they were though, as I silently rode off home.

I've been seeing a few more of these birds around again but I think they have been seriously disrupted by last summer's depletion.